The Hammer Museum’s Biennial Survey Gives a Rich and Varied Snapshot of L.A. 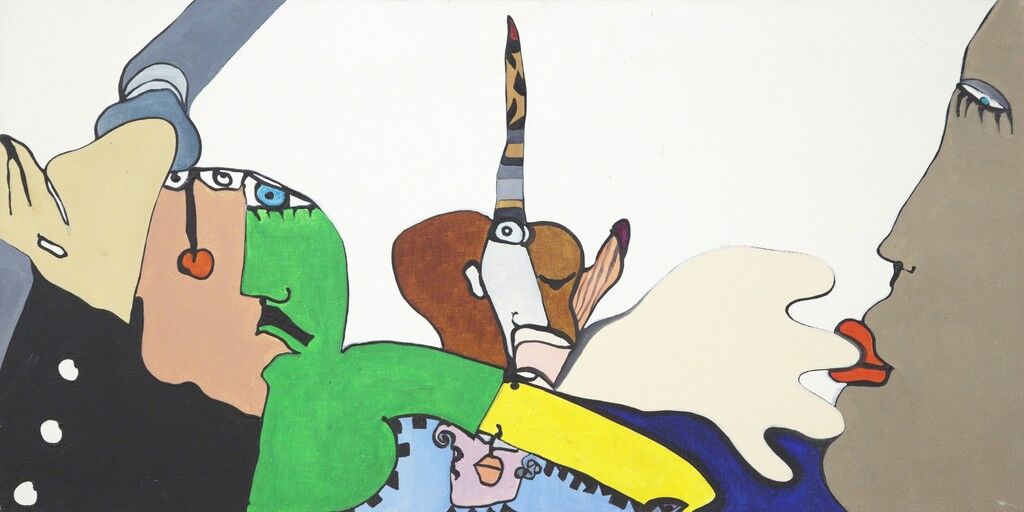 Huguette Caland
Enlève ton doigt, 1971
"Made in L.A. 2016: a, the, though, only" at Hammer Museum, Los Angeles
a, the, though, only. So reads a poem by the minimalist poet Aram Saroyan, one that’s awkward to read and difficult to look at. But paradoxically, serving as the subtitle to the Hammer Museum’s 2016 “Made in L.A.,” it’s efficient—if you let it sink in slowly, return to it, reconsider it—in its encapsulation of the biennial exhibition.
Hamza Walker and Aram Moshayedi’s biennial is comprised of work by 26 artists—though some of the artists’ contributions aren’t housed in the museum’s galleries as such. Saroyan’s piece, for instance, is the subtitle poem.
Guthrie Lonergan
’s work is the exhibition’s website, as well as four cheeky and melodramatic musical interludes, made with the production company Barefoot Music, which are interspersed throughout the public spaces of the museum.
Kelly Akashi
has hung two fleshy-looking sculptures above the main courtyard. 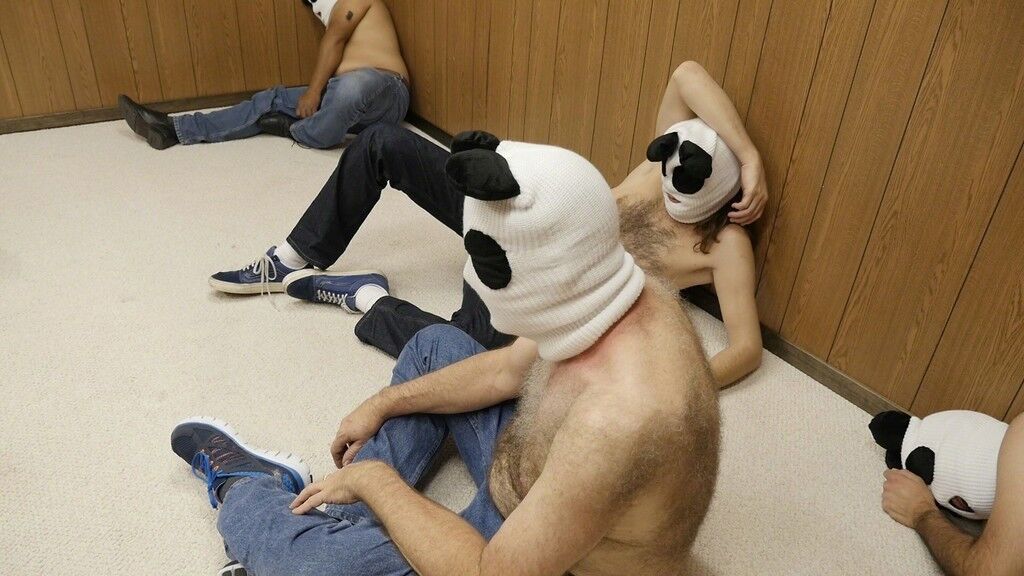 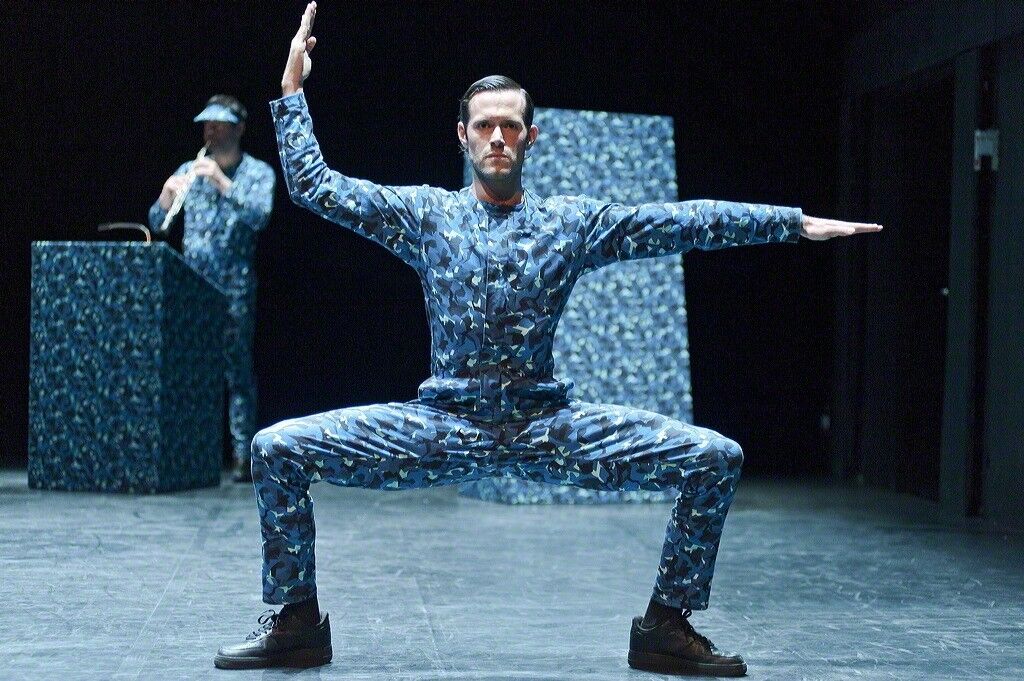 Adam Linder
Vexed Vista, 2015
"Made in L.A. 2016: a, the, though, only" at Hammer Museum, Los Angeles
Then there’s choreographer Adam Linder’s three-person dance performance staged on a camouflage floor, and K-Hole (the trend-forecasting group) founding member Dena Yago’s poems that float in a row of lightboxes in the courtyard. Kenneth Tam’s video Breakfast in Bed (2016) is on display in an isolated gallery space dedicated to video. It is one of the best and most timely works in the show. In it, a group of random men found online are asked to play games, dance, and compliment each other in a small room. Viewers effectively watch them wrestle with their masculinity.
The rest of the 17 artists have been split up into “solo shows” throughout the museum. Though the curators deny the presence of a unifying theme, there are, of course, patterns. The reconsideration of relatively under-recognized L.A. artists is one of those patterns. These include Kenzi Shiokava, Wadada Leo Smith, and
Huguette Caland
, who are all offered mini-retrospectives.
Caland’s work is a revelation. At 85, she is the oldest artist in the show. Over her career, she’s made papier-maché sculptures, sensual
Color Field
paintings, collages, sexually charged drawings that are as engaging as
Dorothy Iannone
’s, and a series of six kaftans for the artist Pierre Cardin. The daughter of a former president of Lebanon, Caland hung out with
Billy Al Bengston
,
Ed Moses
,
Ken Price
, and
Nancy Rubins
when she lived in L.A., but hasn’t received the level of recognition she deserves on the West Coast. 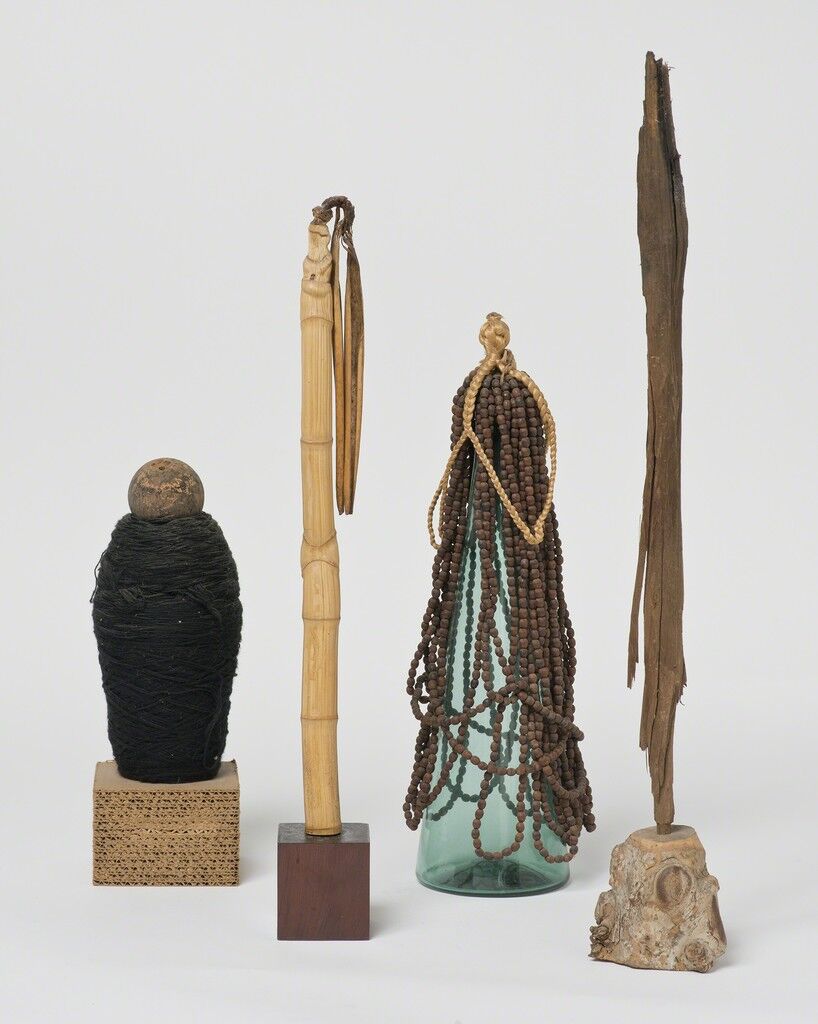 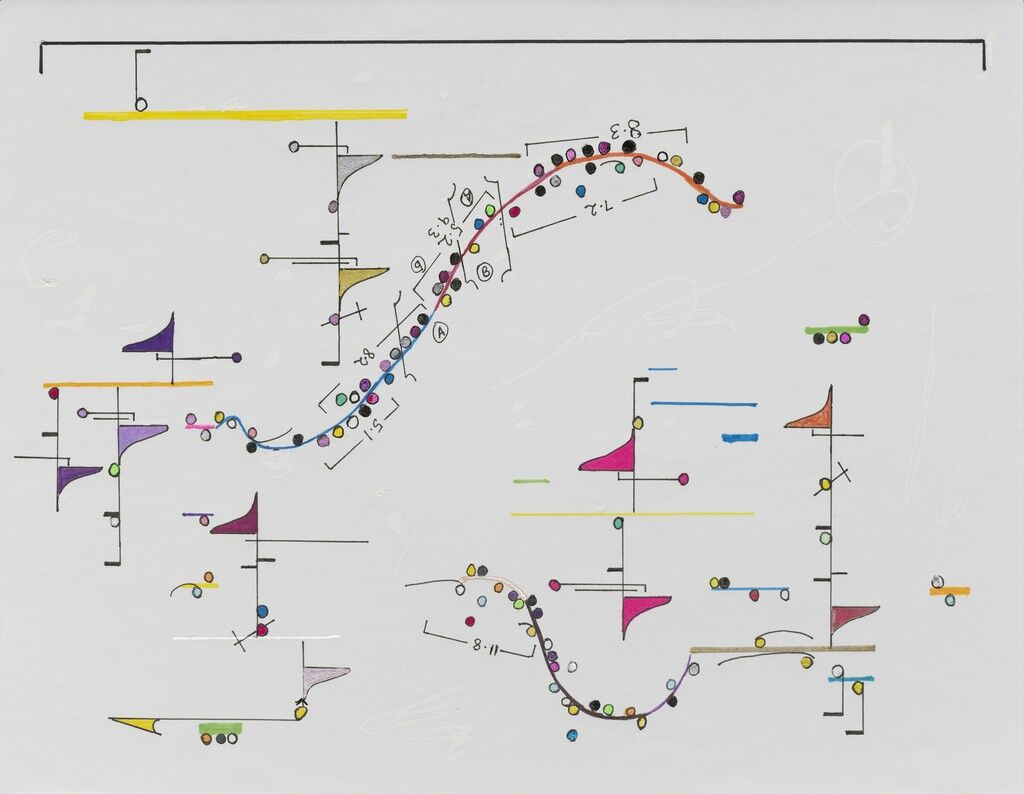 Wadada Leo Smith
Vision, n.d.
"Made in L.A. 2016: a, the, though, only" at Hammer Museum, Los Angeles
Advertisement
Shiokava shares a similar story. A friend of
Noah Purifoy
and
John Outterbridge
, the Brazilian-Japanese sculptor and assemblage artist has lived in L.A. since 1964, but he never really got his due. His discarded-wood sculptures are totemic, fragile, and folksy. Somehow they’re
Rauschenberg
,
Foulkes
,
Calder
, and surf culture all rolled into one.
The third retrospective casts light on Smith, a little-known free-jazz player who created a musical language called Ankhrasmation (“ankh” is the Ancient Egyptian symbol for life, “ras” is the Ethiopian word for leader, and “ma” is short for mother). It’s a bit tough to dig into, his notations scrawled out on sheets of music that are framed on the wall and in display cases. Free-jazz plays in the background, but it takes some effort to become absorbed in this gallery.
Even the younger artists in the show evoke a sort of reconsideration, or excavation. Daniel R. Small and Gala Porras-Kim, both born in 1984, have filled their respective galleries with archaeological materials. Small’s project, “Excavation II,” looks like an ancient Egyptian room at the Met, but the artifacts are actually pieces from the set of Cecil B. DeMille’s 1923 film The 10 Commandments, which the director had buried in the Guadalupe-Nipomo Dunes after filming wrapped. These are interwoven with large murals based on DeMille’s version of ancient Egypt as it appeared in a series of paintings produced for the Luxor Casino in Las Vegas in the 1990s. Small’s project offers a look at how cultures are digested and codified by Hollywood. 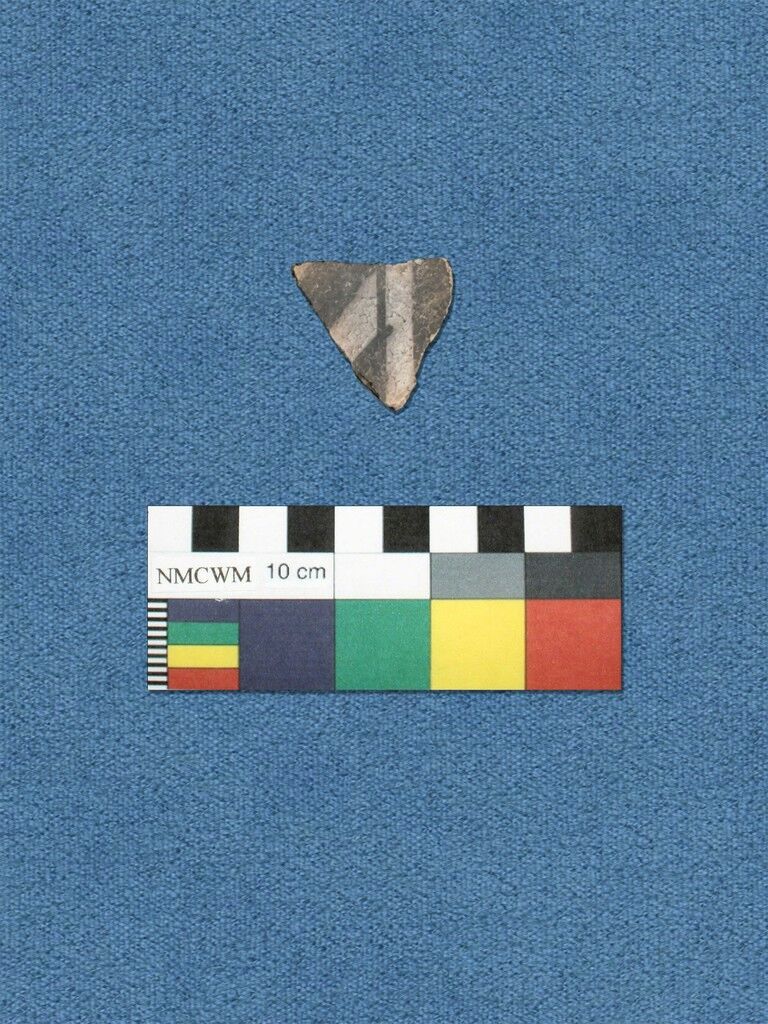 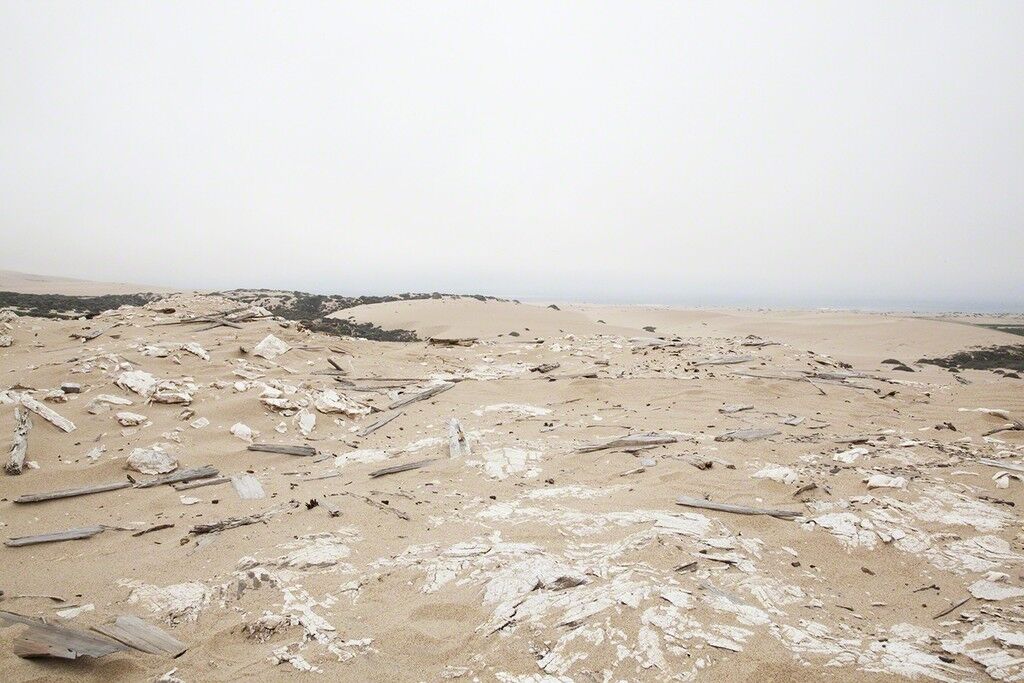 Daniel R Small
Excavation II, 2012
"Made in L.A. 2016: a, the, though, only" at Hammer Museum, Los Angeles
Porras-Kim, on the other hand, worked with UCLA’s Fowler Museum to display objects in its collection that have been mislabeled or uncategorized—a bag of feathers, a pair of shells, or a beaded pillow that somehow lost its provenance. She has given the old objects new life and created new objects around them, such as a Mesopotamian-style jug that she’s carved holes into, suggesting its contents once comprised the feathers, shells, and other smaller objects in the room. It’s a bit of trickery that helps the viewer re-frame the objects as valuable, and not just destined for a dusty box in the back of the Fowler’s archives.
Rafa Esparza, a young artist who made a name for himself at Los Angeles Contemporary Exhibitions (LACE) by laying adobe bricks across the floor of the gallery, has also excavated objects. He buried several chairs and mailboxes in Elysian Park, a historic area of Los Angeles where thousands of mostly Mexican families were displaced in the late 1950s in an attempt to entice the Dodgers to move to the city. He has placed the objects on an adobe-block floor in an open-air gallery above the courtyard. The act of building the adobe blocks is one Esparza has deployed over the years, bringing living earth into the gallery space and allowing it to serve as a democratizing force in the space. 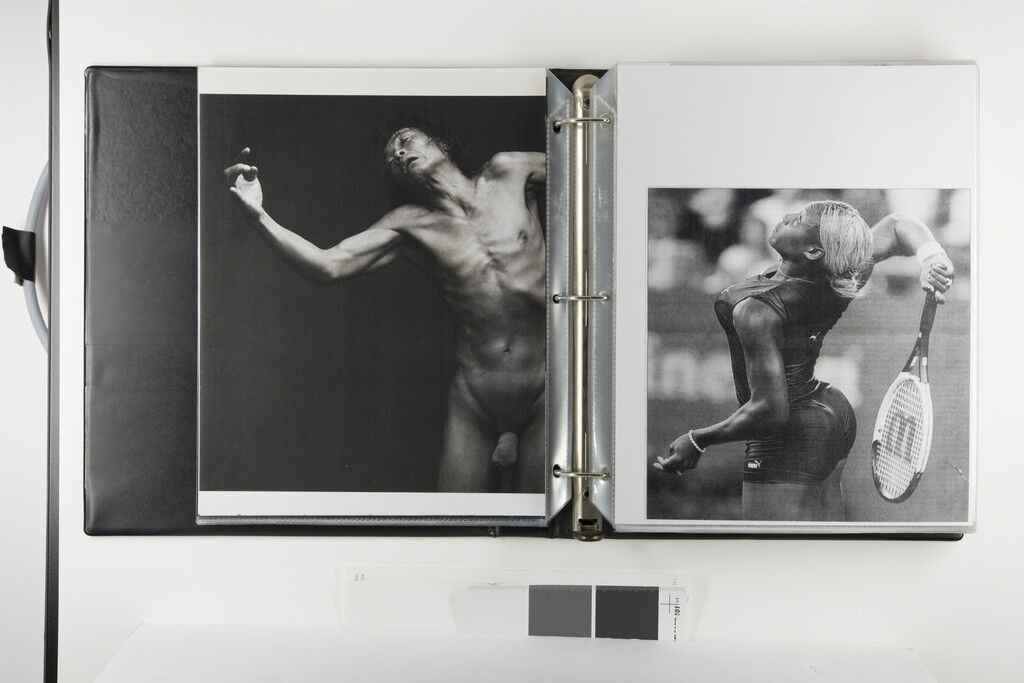 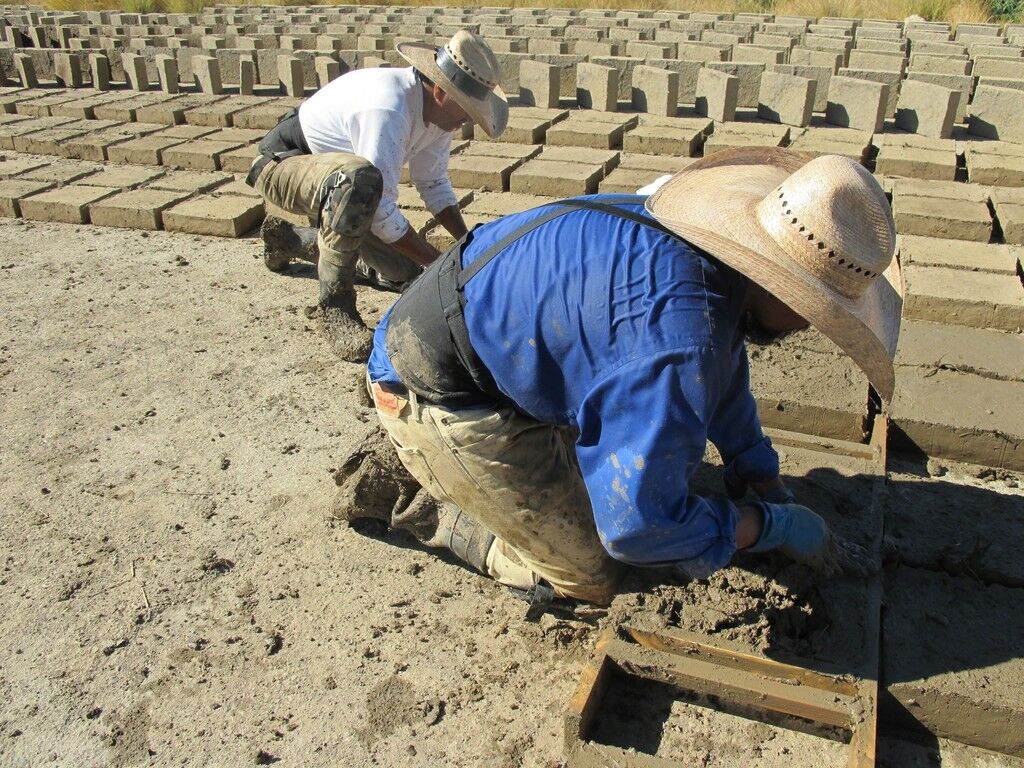 Rafa Esparaza
building: a simulacrum of power, 2014
"Made in L.A. 2016: a, the, though, only" at Hammer Museum, Los Angeles
Other highlights in the show include the incredible three ring binders that cinematographer Arthur Jafa has compiled over many years, an archive of Fred Lonidier’s workers rights public access show Labor Link TV (1988), and the first episode of Martine Syms’s “She Mad,” in which a fictionalized version of Syms goes to a dentist and gets a dose of nitrous oxide, a reference to the Thomas Edison-produced 1907 silent film, Laughing Gas, in which a black woman cracks up all over town after a trip to the dentist.
I don’t usually heap such praise, but “a, the, though, only” is an excellent show, offering a look at a selection of the city’s artists that—for the most part—have operated somewhat on the margins, much like the words in Saroyan’s subtitle text. It’s wide-reaching and inclusive. It’s the kind of show Los Angeles needs right now. It offers up a reconsideration of the city as a place that contains a richly diverse array of artists—a city where age and medium aren’t prescribed for success. Whereas Michael Ned Holte and Connie Butler’s 2014 edition of “Made in L.A.” focused on scenes, clusters, and micro-ecosystems—often giving a scattered impression—Walker and Moshayedi have focused on the individual artists, giving them space and time. And aren’t those really L.A.’s greatest resources? It’s something to consider.
Maxwell Williams
Related Stories