At “Made in L.A.,” 33 of the City’s Artists Aim to Depict the State of Our World Every two years since 2012, the Hammer Museum presents a survey of art made in Los Angeles, the central hub of the West Coast art scene. The recently opened fourth iteration—which, as in past versions, gives a snapshot of the city’s art production and includes a diverse array of local artists, both transplants and long-time Angelenos—comes at a particularly unstable moment.
In 2017, thousands of wildfires tore through California, turning millions of acres of land into scorched earth. A few dozen people were killed, and hundreds of thousands displaced. It’s not surprising, then, that two of the artworks in this year’s “Made in L.A.” evoke the state’s vulnerability with fire. The dancer and choreographer Flora Wiegmann’s Reduction Burn (2018) sees a group of dancers dressed in the colors of flames and embers fluttering and swirling, seemingly tracing the shape of a blaze and embodying a state of flickering uncertainty. And James Benning’s installation Found Fragments (2016) features footage of a 2016 Sierra Nevada fire slowly turning a forest floor into ash. 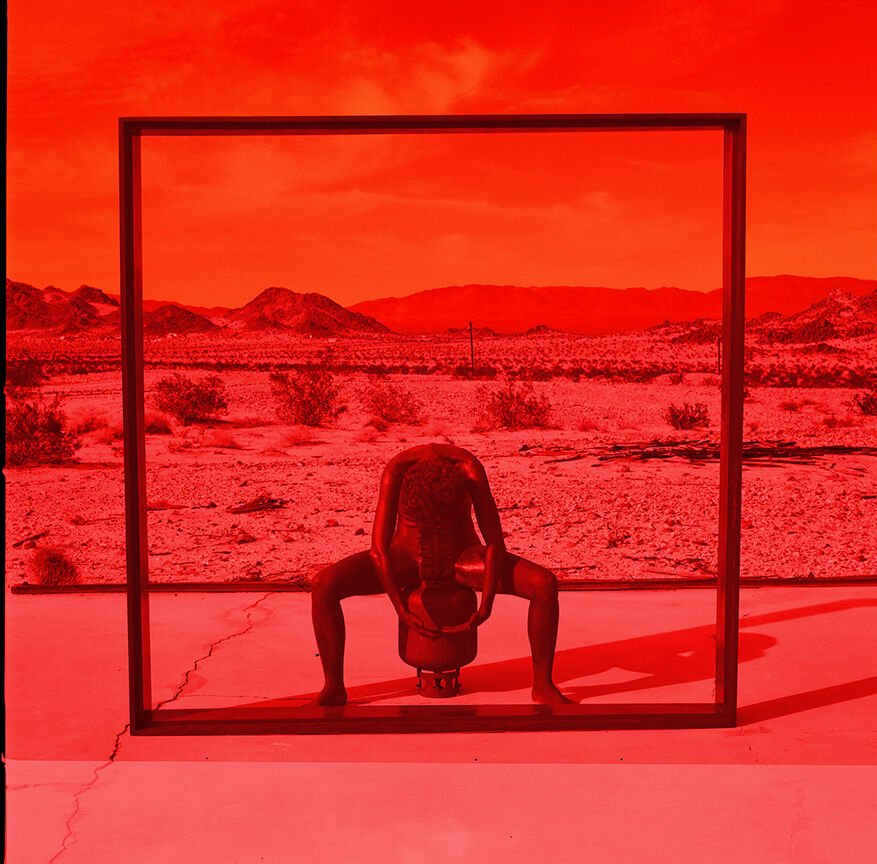 MPA
Untitled Red #5, 2015
Hammer Museum
The environmental threats that face California and the rest of the globe—climate change, pollution, fault lines—surface with some frequency across “Made in L.A.,” but this exhibition is more spark than inferno. It features 33 emerging and mid-career artists that live in Los Angeles, but hail from seven countries. Several will be familiar to New York audiences, including
Christina Quarles
, whose queer, elastic bodies appeared in the New Museum’s recent “Trigger: Gender as a Tool and a Weapon” and The Studio Museum in Harlem’s “Fictions”;
Celeste Dupuy-Spencer
, whose figurative paintings featured in the 2017 Whitney Biennial; and
Aaron Fowler
, whose multimedia, maximalist installations are currently filling the windows of the New Museum.
Co-curators Anne Ellegood and Erin Christovale said at the press preview last Friday that the artists were chosen with no overarching theme in mind, except that the work responds to our current moment. In a period of political chaos, impending climate catastrophe, and social upheaval—and no small amount of tumult in L.A.’s art world—the cumulative response from the included artists feels less angry than melancholic. A survey show need not be didactic, but this one is best when it invites a shift of perspective, as in the work of
MPA
, whose jumbo pair of generic red sunglasses are cut in half, with one side appearing on the wall of the Hammer’s courtyard, the other in a gallery. They are installed on either side of a fissure-like red line that runs along the gallery floor, evoking L.A.’s proximity to the San Andreas Fault. An accompanying cryptic arrangement of green and red objects and wall markings includes a bullseye that suggests either a source of vision or the epicenter of an earthquake.
Nearby,
Charles Long
has installed what resembles a forest of possessed theme park props: severed tree trunks; chopped-up penises that smile mournfully. One puffs idly on a cigar, a phallic cousin to the fleshy smoking blobs of
Philip Guston
. Long’s bizzaro, surreal imagining of the patriarchy’s last gasp connects male supremacy to environmental damage, and includes nods to the male greats of art history—
Edvard Munch
’s screaming face draped like a
Salvador Dalí
clock over the arm of a tree;
Alberto Giacometti
’s standing woman transformed into a long, slender dick that rises from wheels like his famous Chariot (1950). A light glow emanates from this strangely alluring graveyard of wilted masculinity. 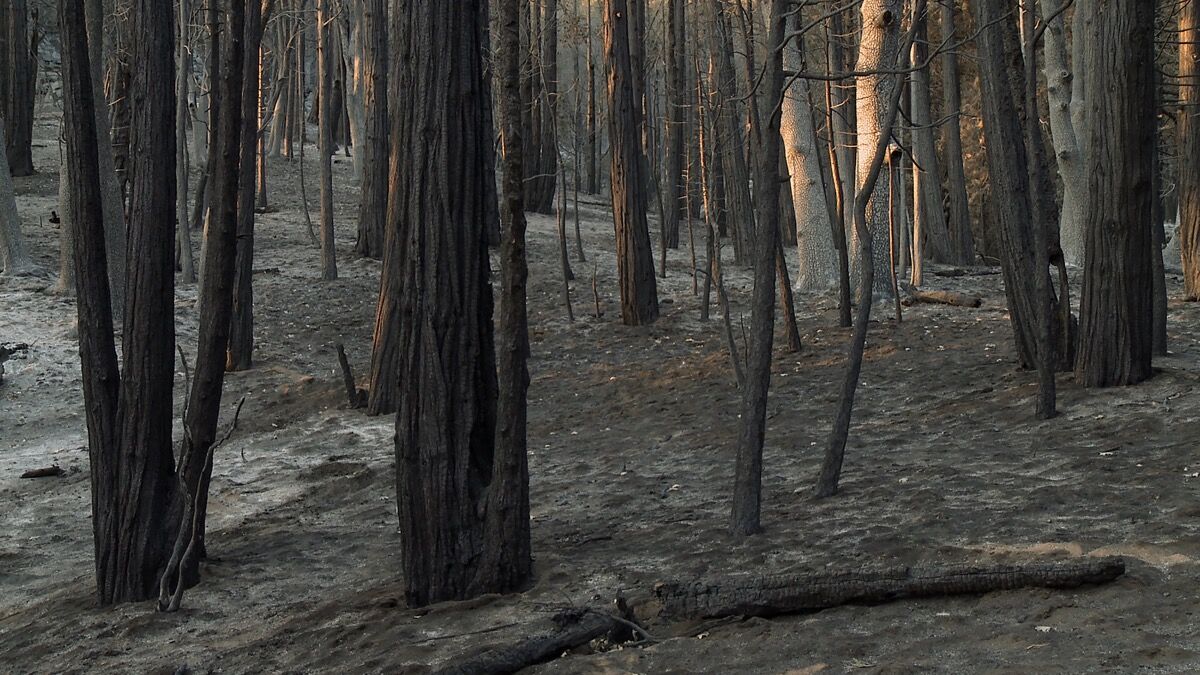 Advertisement
On the Hammer’s sun-filled terraces, Lauren Halsey’s white tomb, which visitors can circumvent and enter, might give an equally doleful or elegiac impression, except for the inscriptions and images on its surface, which are a contemplative and celebratory tribute to the artist’s own South Central L.A. community—a neighborhood that has been wracked by rapid gentrification. Images of her family and friends are carved into the temple’s surface alongside storefront signs and what appear to be the names of local organizations—real or fictional—like The Black Women Coalition of Neighborhood Developers. Images of spaceships hover over Egyptian hieroglyphics, boomboxes, and pharaoh masks, connecting this part of Los Angeles with an ancestral past and future. Later this year, the installation will become a permanent fixture in the city when it goes up on Crenshaw Boulevard, at the site of an African market where Halsey spent time as a child—guaranteeing a solid anchor and gathering space for the local community.
The issue of contested land materializes elsewhere in the exhibition—for example, in Mercedes Dorame’s exploration of her community, the Tongva people, who are one of L.A.’s founding indigenous cultures. This theme often continues to intersect elsewhere with personal narratives. In a vault-shaped gallery,
EJ Hill
has installed the abstracted trappings of an American college sports field, replete with a lawn, running track, and what appears to be an oversized, insurmountable hurdle. The walls are lined with photographs—shot by his collaborator
Texas Isaiah
—that document Hill running around each school and institution he ever attended in Los Angeles, including UCLA. On a mock winner’s podium at the back of the space, Hill will stand for the duration of the exhibition, posed in front of a neon sign that roughly matches the outline of his body. It reads: “Where on earth, in which soils and under what conditions will we bloom brilliantly and violently?”
The piece, Excellentia, Mollitia, Victoria (2018), expresses the vulnerability and perseverance of one (black) body and soul in the face of the (white) systems, institutions, and sporting rituals that shape the United States—and the physical and emotional effort required to stay afloat in an environment where the odds are overwhelmingly stacked against people of color. 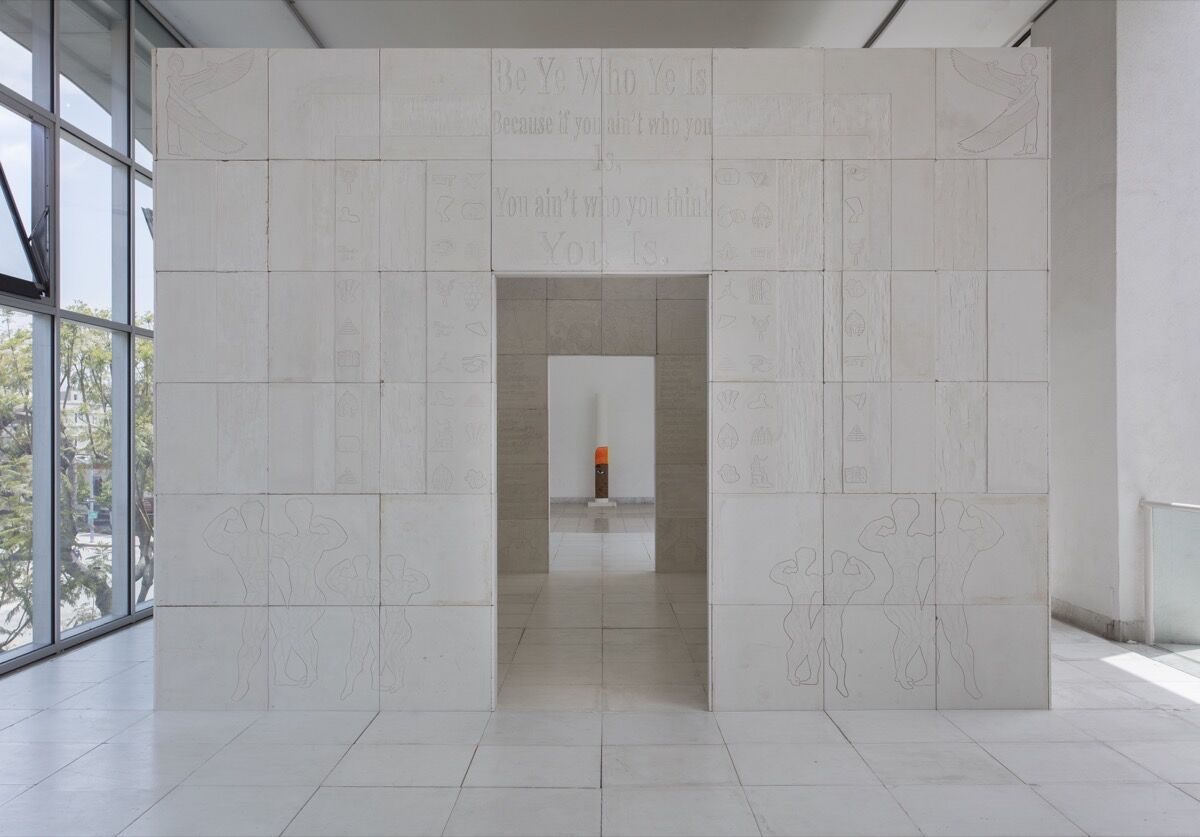 The presence of bodies in this biennial—a thread that Christovale pointed to at the preview—continues in the work of the exhibition’s oldest artist, the 97-year-old
Luchita Hurtado
, some of whose paintings turn her naked body into an undulating desert vista. In a series of
Georgia O’Keeffe
-esque compositions, Hurtado portrays herself seen looking down from a standing gaze. The Venezuelan artist was associated with
Leonora Carrington
,
Frida Kahlo
, and
Remedios Varo
when they all lived in Mexico, and clear influences of
Surrealism
and mysticism are laced through the work.
Occupying its own gallery on the Hammer’s ground floor is Gelare Khoshgozaran’s Medina Wasl, Connecting Town (2018), an installation that meditates on the place of the Middle East in the American consciousness. The centerpiece is a video in which a camera roams over generic expanses of desert and navigates the adobe huts and buildings of Medina Wasl—a fictional town built on a military base in Southern California. (Akin to a Hollywood film set, it roughly takes the shape of Iraqi and Afghani desert landscapes, and is used for soldier-training exercises.) Voiceovers incorporate interviews with American war veterans who served in Iraq and Afghanistan, while in other scenes, a cursor moves over digital maps of the desert terrains, suggesting an insidious flattening of countries to little more than icons, boundaries, and other de-personalized approximations. It brilliantly conveys the uncomfortable convergence of war, fiction, and entertainment that allows colonialist attitudes to thrive.
The works in “Made in L.A.” are good at connecting certain dots and telling moving personal narratives. But for those looking for a forceful, noisy rebuke to this morally abject moment in American history, this isn’t it. Yet there is quiet strength here, despite the relatively down-at-heart atmosphere that persists in the galleries—a feeling of running in circles, of searching for terra firma, accurately reflecting the mood in a country whose problems feel endless and multiform.
Tess Thackara
Related Stories