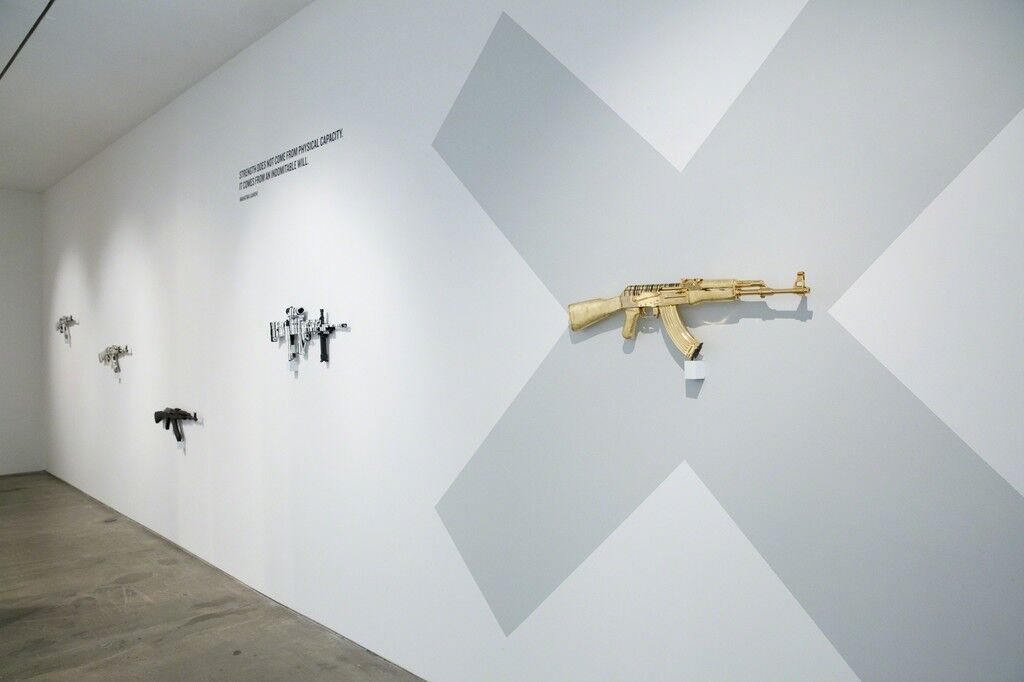 To create the pieces featured in “History Interrupted, The Art of Disarmament,” McCrow started with decommissioned weaponry—obtained directly from areas of conflict—and used stencils, lacquer, paint, gold plating, and chemical stains to suffuse each object with additional layers of meaning. Painted red and emblazoned with the cheerful logos of Mattel and Fisher-Price, Toy Gun, for instance, makes sharp reference to the plight of the child soldier. The gilded Portrait of a Magazine, in turn, centers around an AK47 procured from the first Gulf War. Plated in 24k gold and lavishly framed, it’s a provocative juxtaposition of firearms and wealth, especially given its origins. 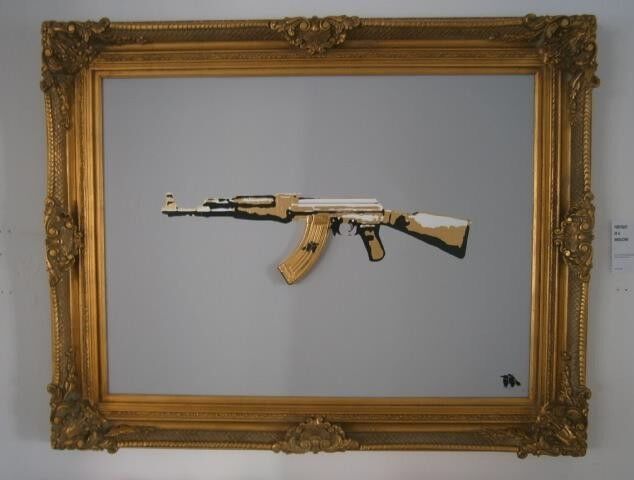 Carl Mccrow
Portrait of a Magazine
HG Contemporary
Every gun tells a story, McCrow’s collection seems to say—and the artist, who’s on a personal mission to deactivate and destroy as many weapons as possible, considers it his duty to share them. Like many young men, McCrow was vaguely intrigued by guns and violent video games from an early age; he later incorporated them into his art. But his relationship to weaponry changed in 2009 when a close friend lost both legs and an arm in an explosion while serving with the British Army in Afghanistan. “Matt’s injuries were horrific,” McCrow later said. “It made me sick to my stomach and I couldn’t actually do my work, it just didn’t feel the same. I thought, I’m not worthy to make artwork out of this while lives are being smashed on the other side of it.”
In the aftermath of that personal tragedy, he decided to sharpen his artistic focus, using his work to raise hard questions about morality, conflict, and the human experience. McCrow also started a charity, One Less Gun, to raise awareness about the ongoing threat of guns and to fund special teams to destroy and deactivate guns in war-ravaged regions. The victims of gun violence, the artist reminds us, aren’t just foreigners in faraway lands, or nameless faces in the crowd. As he told The Independent in 2013, one of his better-known works—featuring a decommissioned SA80 gun painted with a barcode—is dedicated to Matt, and the gun itself is the same kind that injured his friend in Afghanistan.
—Bridget Gleeson
“History Interrupted, The Art of Disarmament” is on view at Hoerle-Guggenheim Gallery, New York, Apr. 30 – May 28, 2015.
Follow Hoerle-Guggenheim Gallery on Artsy.
Related Stories