When He Wasn’t Making History, Winston Churchill Made Paintings 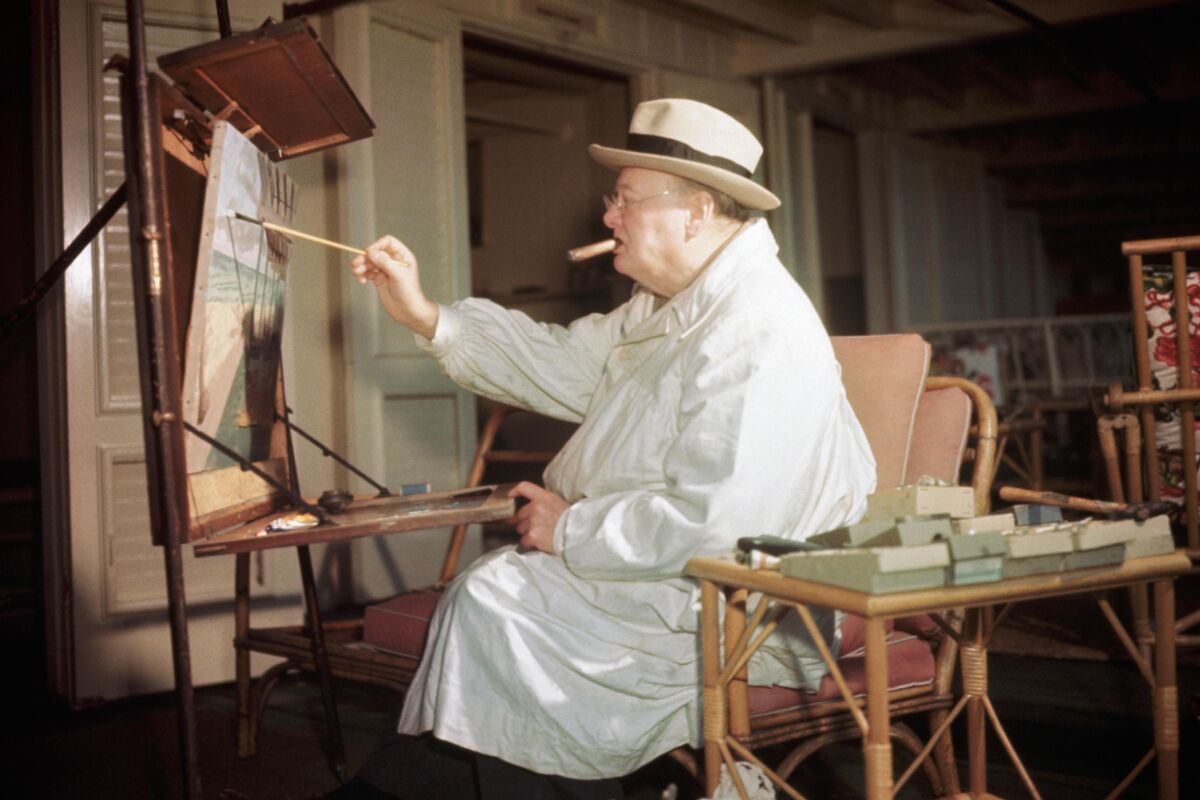 At the age of 40,
Sir Winston Churchill
found himself at a career low: After the World War I attack he ordered on Gallipoli, Turkey, went horrifically awry, he was demoted from his role as First Lord of the Admiralty in May 1915. He resigned from his government post and became an officer in the army. Deflated of power and consumed with anxiety, he took up an unexpected new hobby: painting.
“Painting came to my rescue in a most trying time,” Churchill would later write in the 1920s, in essays that would become a small book, Painting as a Pastime.
The hobby became, for the great British statesman, a source of delight and a respite from the stress of his career. He would eventually create over 550 paintings, crediting the practice with helping him to hone his visual acuity, powers of observation, and memory. The pastime would flourish, and perhaps even aid him, as he furthered his career as a world-renowned writer, orator, and political leader. 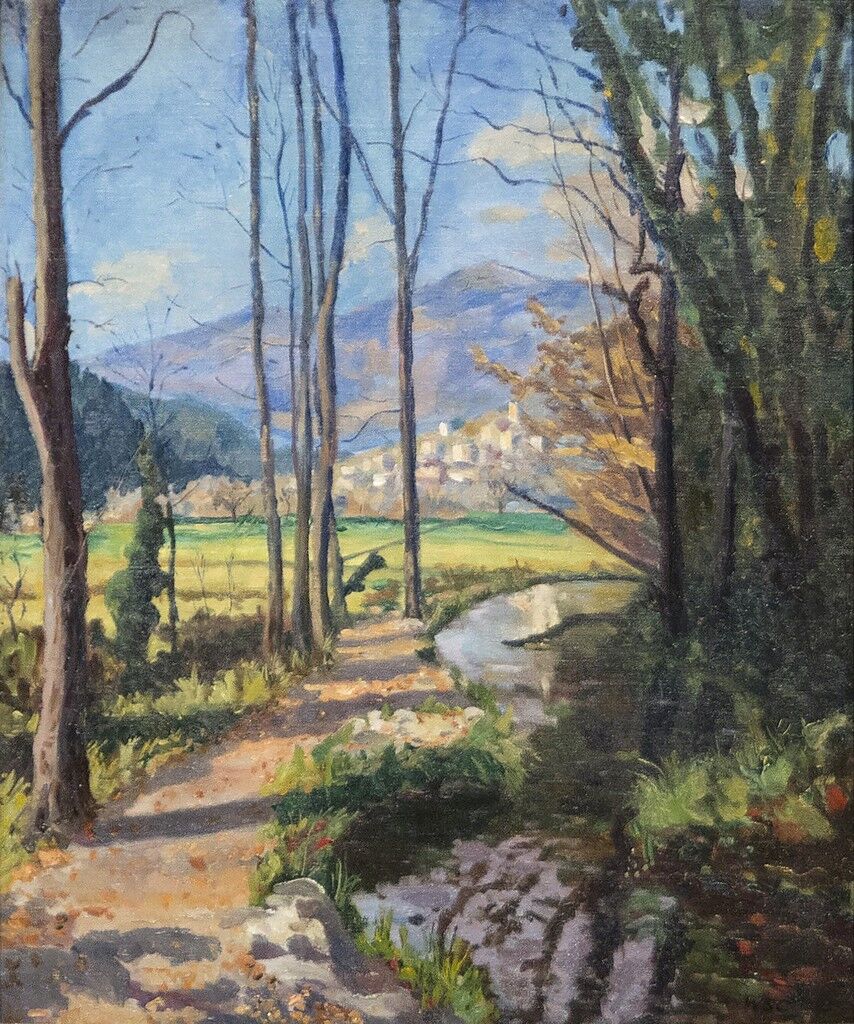 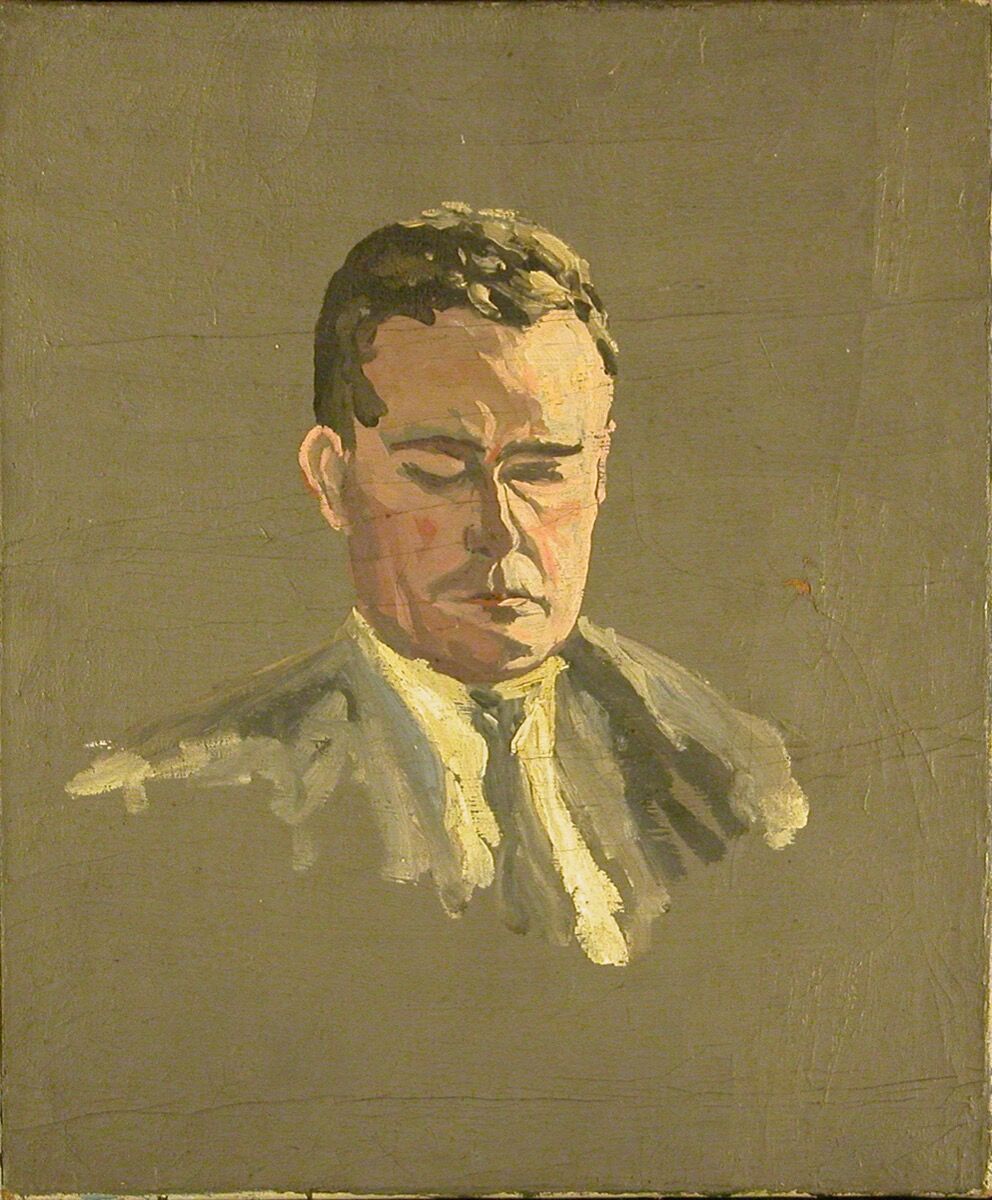 Churchill first picked up a brush at the suggestion of his sister-in-law, Lady Gwendoline Bertie, who was also a painter. In Painting as a Pastime, he recalled his first artmaking attempt one day in the countryside. Intimidated by the blank canvas before him, he diffidently placed a pale blue daub of paint on its surface to begin the sky, and was soon interrupted by the arrival of Glasgow painter
Sir John Lavery
and his wife, Hazel. The latter exclaimed, “Painting! But what are you hesitating about?” She grabbed a brush and made “large, fierce strokes and slashes of blue on the absolutely cowering canvas.” With that, Churchill wrote, “I seized the largest brush and fell upon my victim with Berserk fury. I have never felt any awe of a canvas since.”
In the five decades that followed, Churchill was prolific, primarily focusing on landscapes and seascapes made en plein air. And despite his incessant claims that he was merely an amateur, he developed an admirable flair for the art.
“His approach was very simple: Go outside and paint what you see,” Duncan Sandys, Churchill’s great-grandson, told Artsy. “He did it for fun; he didn’t take his paintings very seriously.”
Churchill was most fond of oils, for their forgiving, flexible nature and bright colors—as well as the joy they exuded. “Just to paint is great fun,” he wrote. “The colours are lovely to look at and delicious to squeeze out.” 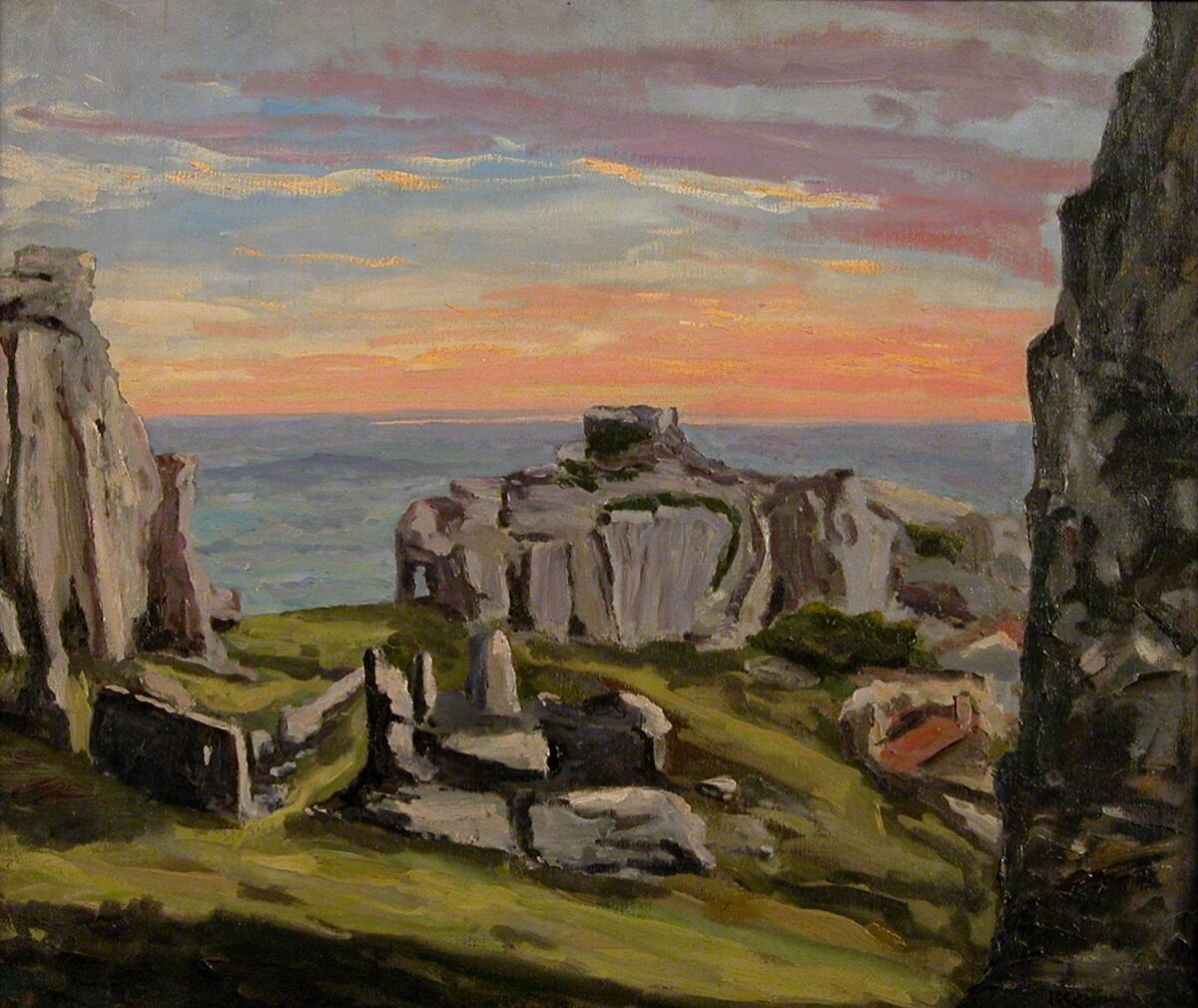 Advertisement
He was known to set up his easel outdoors to capture the grounds of his country home in Kent, called Chartwell. (Now owned by the National Trust and open to visitors today, it still houses Churchill’s preserved painting studio.) The politician-painter would also work during his travels to Egypt, Italy, Morocco, and the south of France, among other locations.
While a proclivity for outdoor subjects prevailed, he also tried his hand at still lifes and portraits, with varying degrees of success. Churchill’s works read as somewhat intimate snapshots, illustrating his favored travel destinations, holidays, and family members. On the whole, his subjects appear decidedly positive, communicating the pleasure he got out of depicting them.
Churchill was largely self-taught, and adamant that formal art lessons were a young person’s game. The thing he and his like-minded amateur peers needed most, he believed, was a certain kind of passion.
“We cannot aspire to masterpiece,” he wrote. “We may content ourselves with a joy ride in a paint-box. And for this Audacity is the only ticket.”
Nevertheless, he was keen to improve his technique, and did so by taking cues from leading artists. He admired the work of
Impressionist
and Post-Impressionist masters like
Édouard Manet
,
Claude Monet
,
Paul Cézanne
, and
Henri Matisse
, and was even known to travel to the same locations where they had painted years before, seeking out the light and land that had proven inspirational. 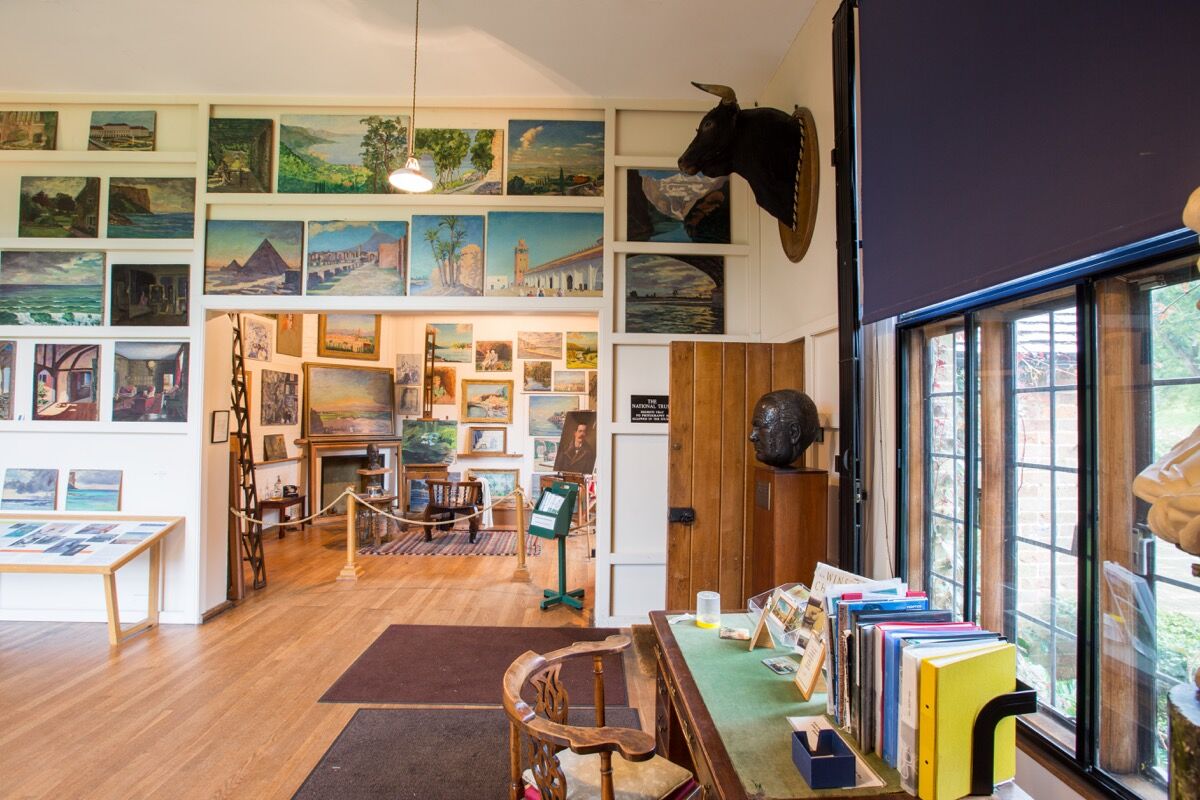 “He had numerous artists among his social circle, of whom many became mentors to him,” said Katherine Carter, project curator and collections manager at Chartwell. She pointed to
Walter Richard Sickert
and
William Nicholson
, in particular, who would offer Churchill advice—which he may or may not have accepted.
Carter noted that a pair of paintings tell the story of Churchill and Nicholson working side by side on the same scene of the pool at Chartwell. “Nicholson had been trying to demonstrate how Churchill should venture into the more delicate and subtle colors on his palette,” she explained. “Churchill, a man knowing what he liked, chose to ignore this guidance and has painted an identical scene using the very brightest greens he could create.” (The scenario recalls the famous Churchill quote: “I am always ready to learn, although I do not always like to be taught.”)
Brilliant colors delighted Churchill; he lavishly used bright blues and greens, ripe reds, oranges, and yellows. “I cannot pretend to feel impartial about the colours,” he wrote in Painting as a Pastime. “I rejoice with the brilliant ones and am genuinely sorry for the poor browns.” Indeed, even to walk into Churchill’s studio in Chartwell today, Carter said, “is like walking into a kaleidoscope.”
It’s not such a surprise that Churchill favored uplifting colors, since he often turned to painting to improve his mood. He was known to suffer from bouts of depression, which he described as a “black dog” that clung to him throughout his life. “When the ‘black dog’ was nipping at his heels, he found great comfort in painting,” Riley explained. (Carter noted that there is a correlation between the most difficult times in Churchill’s life and the volume of his paintings; the three-week vacation in Italy that he took after he was defeated in the election of 1945 was his most prolific moment.) 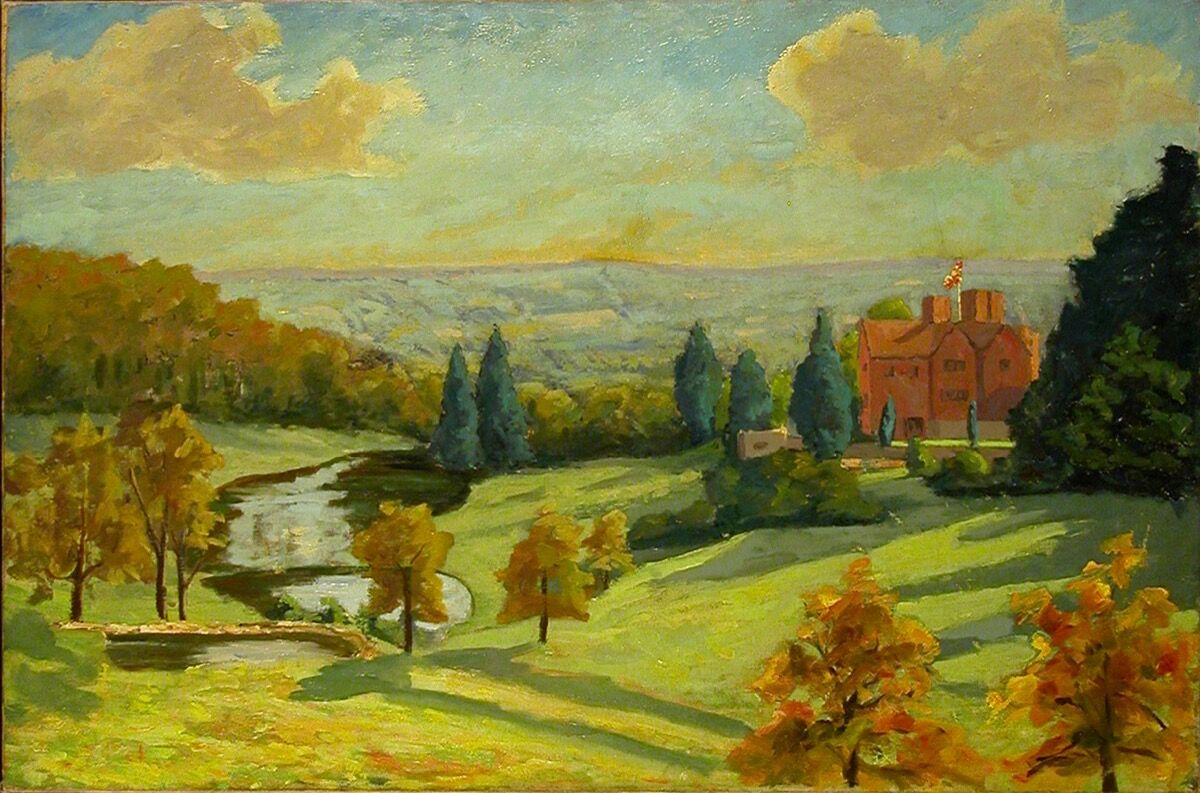 Some have ventured to draw a line between Churchill’s painting pursuits with his legendary skill for writing. “How he picked up a paintbrush is analogous to how he picked up a pen to write a speech,” said Timothy Riley, director and chief curator of the National Churchill Museum in Missouri. “His paintings come from the same place. His brilliant mind, his vision, his power of observation informed him as a statesman, a writer, a reader, and as a painter.”
But his approach to painting was quite at odds with that of writing. While painting was a challenge, writing came to him naturally, and it was, for much of his life, how he earned a living. “With painting, Churchill was forever the keen student, whereas with words, he was always the master,” Carter said.
It may well be, though, that Churchill’s approach to painting was informed by his writing. “We know Winston Churchill as a great writer and speaker,” said Riley. “His speeches are some of the greatest of the 20th century, and what he did with words, moving people through speeches, he was trying to do with color and light and shadow—the things that painters use to convey a message, depict the world, and evoke emotion.”
Sandys believes that painting made Churchill a more effective leader, particularly thanks to the improved powers of observation and memory the hobby brought him. He pointed to the Battle of Britain in 1940, shortly after Churchill became prime minister, when he went to the front lines to observe the British defense firsthand. “Perhaps he thought that by going down there and looking at these things himself, he would see more and recall it more accurately,” Sandys offered, noting that it could’ve helped him to analyze the full picture of the battlefield, seeing the areas for improvement. “I think it’s a question that should be posed: Was painting a contributing factor to some of the decisions he made at that critical moment?” (Churchill himself drew parallels between the role of a general in battle and a painter.)
5 Images
View Slideshow 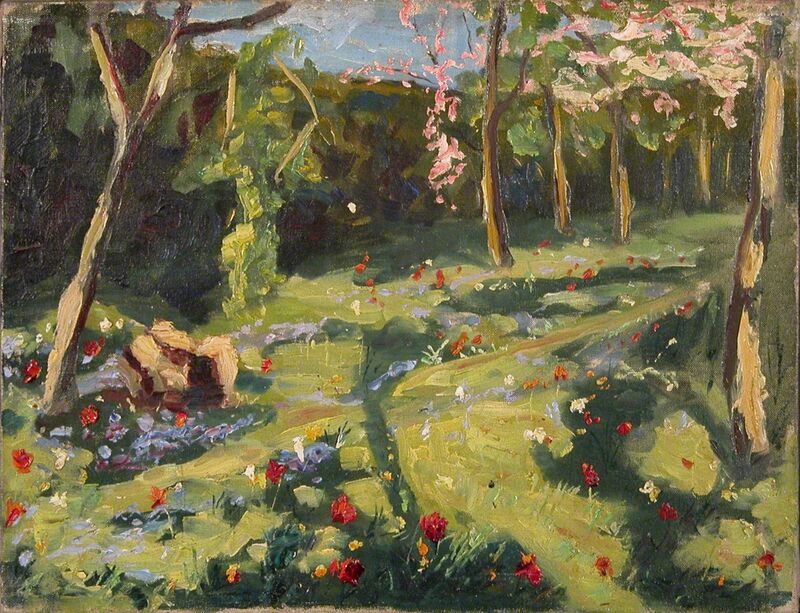 And while he painted only during moments of leisure, Churchill did create a work during World War II. It was during a trip to Marrakech with U.S. President Franklin D. Roosevelt in 1943, after the Casablanca Conference, and constituted an act of diplomacy between the two nations. “It was the only picture he would paint during the war, and it was later gifted to Roosevelt as a souvenir of their time together during that very brief moment of respite,” Carter explained.
A later American president, Dwight D. Eisenhower, was so taken by Churchill’s paintings that he decided to try the hobby for himself, and even set up a studio in the White House—the only U.S. president to do so. More recently, former president George W. Bush credited Painting as a Pastime as an inspirational force behind his own art practice.
Despite the praise he earned for his work, Churchill was always nervous about showing it publicly or even to friends. In London in 1947, for example, Sir Alfred James Munnings, then-president of the Royal Academy of Arts, managed to convince Churchill to submit two paintings to the annual summer exhibition, but the statesman insisted they be shown under a pseudonym, David Winter. 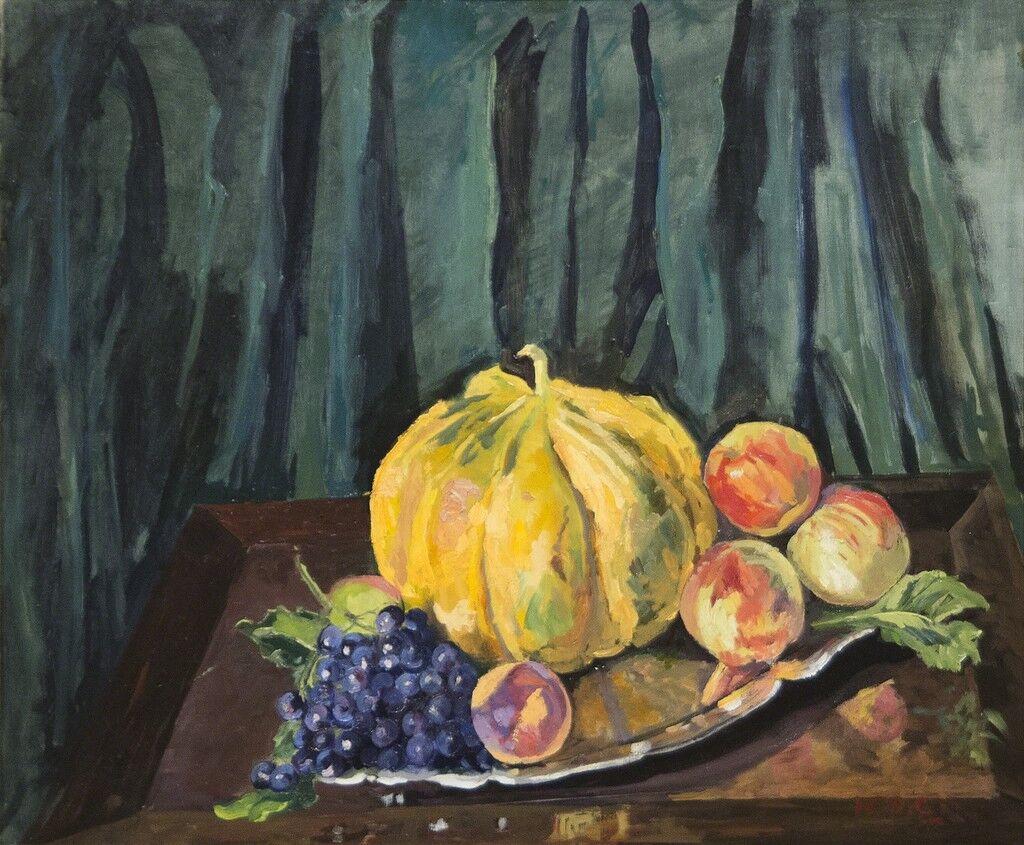 Sir Winston Churchill
Still Life, Fruit, ca. 1930's
Heather James Fine Art
In 1959, President Eisenhower requested that Churchill’s paintings be shown in the U.S., and the resulting exhibition would go on to be seen by half a million visitors as it traveled across the country and on to Canada, Australia, and New Zealand. Churchill would even be named an honorary academician of the Royal Academy in London.
In recent years, Sandys has helped to put on exhibitions of his great-grandfather’s paintings, including a traveling show across the U.S. that was organized in collaboration with the National Churchill Museum. The latest exhibition—launching this spring at Heather James Fine Art in Palm Desert, California—includes 11 paintings from Sandys’s father’s collection.
One can’t help but question, though: Does the esteem for Churchill’s art have to do with the paintings, or the man who made them?
“I think there will always be an element of fascination with them because they are painted by Winston Churchill, irrespective of the image itself, and I don’t think there’s anything wrong with that,” Carter noted. “The interest in his paintings never diminishes and the reason for that, more so than the image on the canvas, is because of the unique insight it gives us into the mind of such a fascinating and enduring individual.”
And while they’re not particularly revolutionary at face value, Churchill’s paintings do remind us of the great joy that painting can bring. Echoing the book of Matthew in the New Testament, Churchill may have put it best: “Happy are the painters, for they shall not be lonely. Light and colour, peace and hope, will keep them company to the end, or almost to the end, of the day.”
Casey Lesser is Artsy’s Lead Editor, Contemporary Art and Creativity.
Related Stories 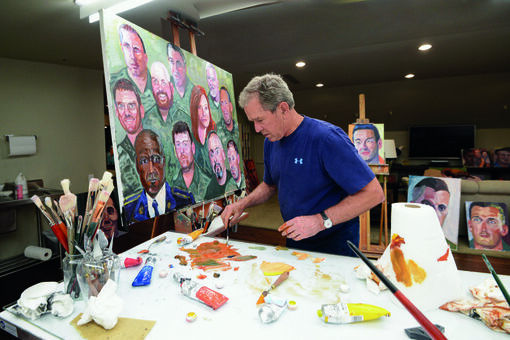