Judy Chicago in “The Dinner Party” China Painting Studio, 1975. Courtesy of Through the Flower Archive.

In 1974, artist
Judy Chicago
made a small, striking artwork titled Flesh Spreading Her Wings and Preparing to Fly. It depicts a pink, fleshy form resembling the interior chambers of a flower, the raw wings of a new butterfly, or—most distinctly—the soft folds of a vulva. Chicago painted the image onto a porcelain plate, encircled by the work’s title and beams of gold pigment. As a whole, the composition resembles a little sun, with rays of light emanating from its center.
Chicago made the piece the same year that she began her most famous and perennially controversial artwork, The Dinner Party (1974–79). The installation consists of a large triangular table with 39 place settings, each with a porcelain plate that doubles as an abstract portrait of a real or mythical woman that Chicago believed had been excluded from history. Like Flesh Spreading Her Wings and Preparing to Fly, the plate designs resemble colorful winged insects crossed with the female sex.
When the piece was first exhibited at the San Francisco Museum of Modern Art in 1979, it was met with both wild enthusiasm for asserting female herstory, and vehement backlash for its supposedly pornographic imagery.
Both artworks are currently on view in “Roots of The Dinner Party: History in the Making” at the Brooklyn Museum, where The Dinner Party has been on permanent view since 2007. Through a tantalizing array of ephemera, preparatory drawings, and early works by Chicago, it takes an in-depth look at the long, arduous development of the artwork, which took five years and countless volunteers to assemble—and has since become the poster child of the
Feminist Art
movement. 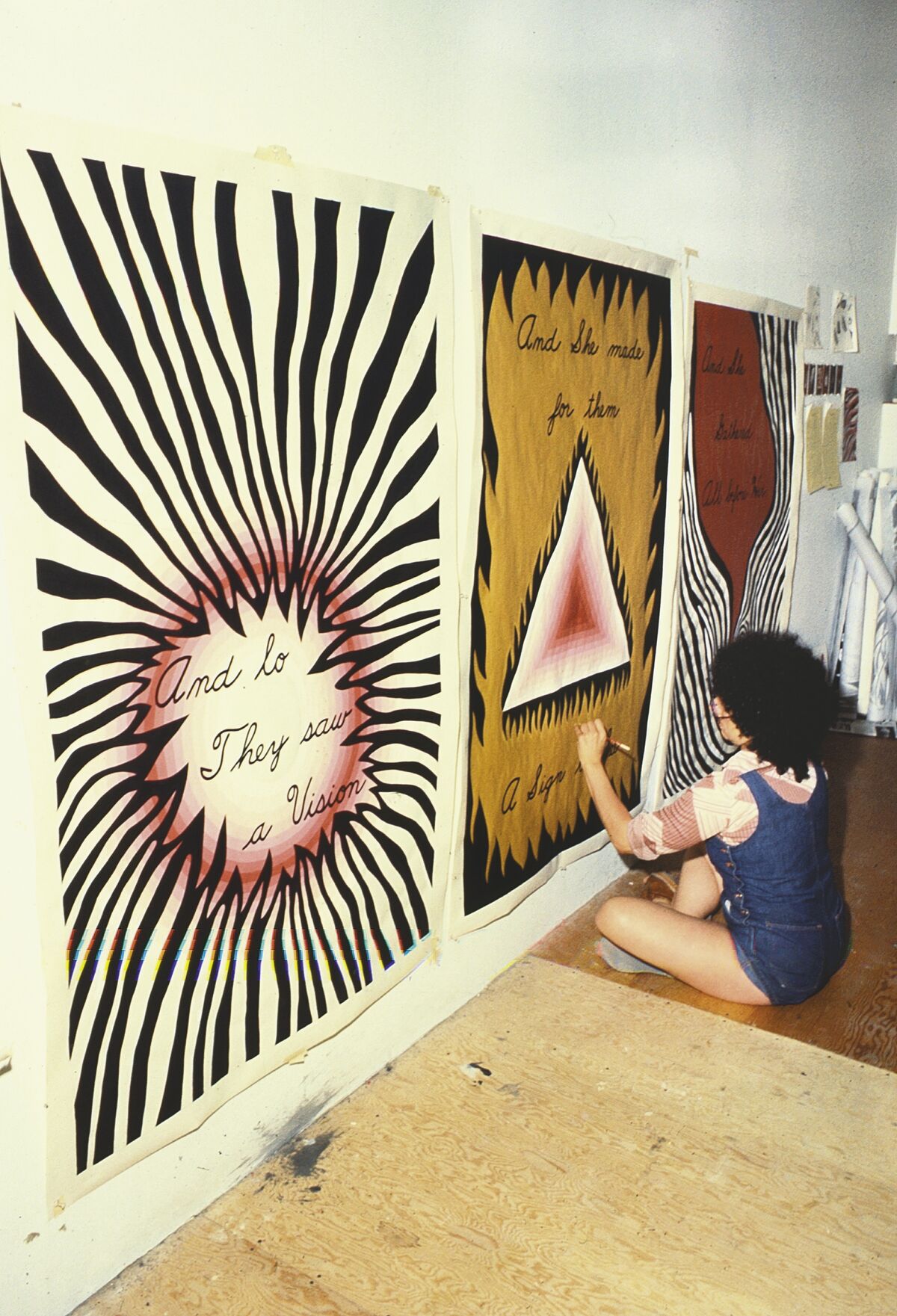 Judy Chicago Designing the Entry Banners for “The Dinner Party,” 1978. Courtesy of Through the Flower Archive 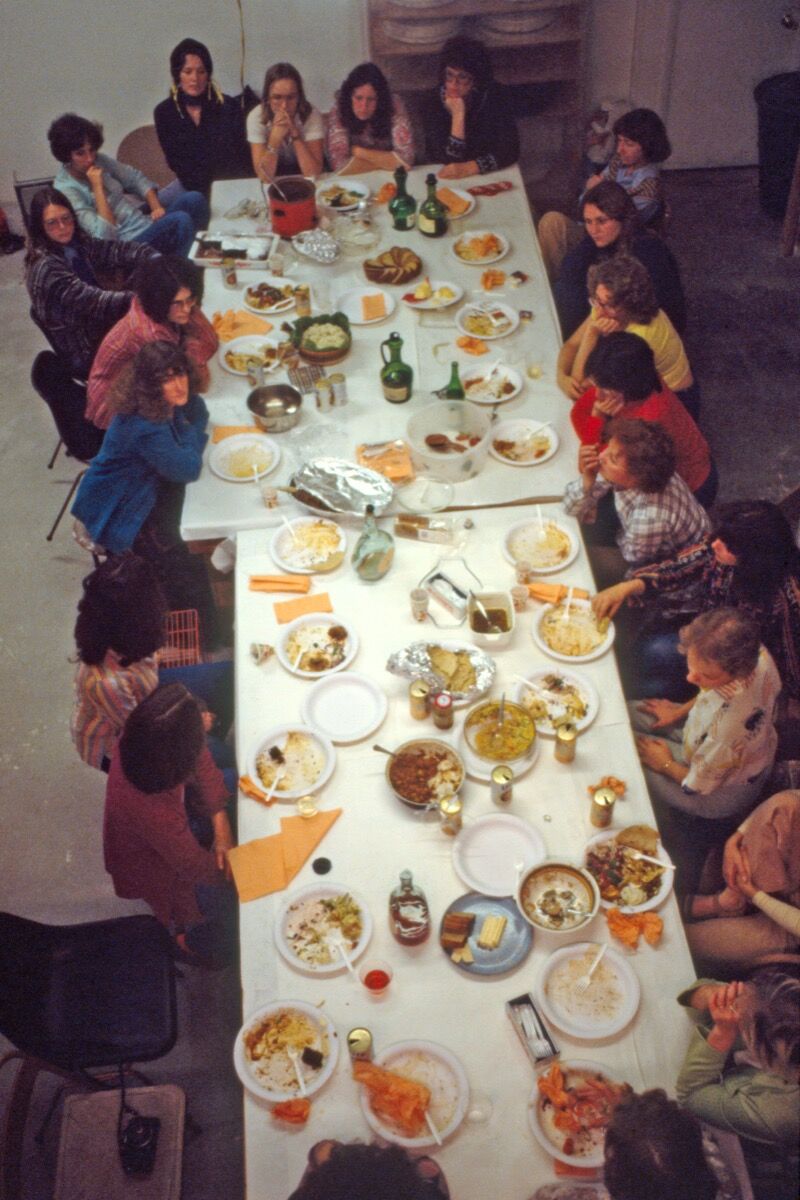 Thursday Night Potluck with “The Dinner Party” Workers, 1978. Courtesy of Through the Flower Archive

In the process, the show also dissects the long-term influence of the piece, exploring both its triumphs (propelling feminist art and the names of important female figures into popular discourse) and its shortcomings (its limited representation of minorities).
“It’s such an iconic work, and that comes from the fact that it signifies so many things,” Carmen Hermo, the exhibition’s curator, tells me by phone. “That includes a huge moment of transition, when women were just starting to come together as feminists and get things done.”
When Chicago started The Dinner Party, in 1974, she had already begun to establish herself as a progenitor of feminist art. Like many of her female peers, she’d become frustrated by the male-dominated art world of the 1960s (and decades and centuries past), where women were rarely allowed entry. In response, she began to portray her experience as a woman in minimalist canvases.
In her “Great Ladies” series from the early 1970s, Chicago represents the social constraints faced by women through canvases composed of angular forms, like boxes and bars, which allude to constriction. Christina of Sweden (1973), for instance, shows the former Swedish queen as a composition of undulating lines contained by concentric squares.
4 Images
View Slideshow 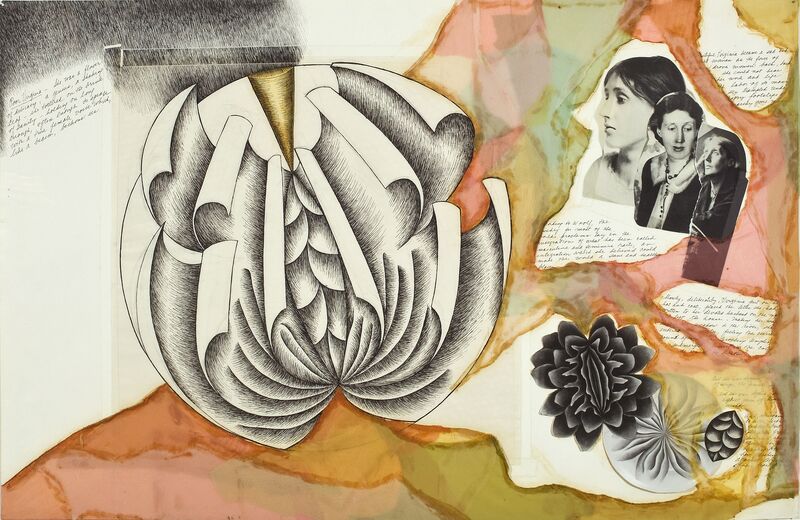 Advertisement
Around the same time, Chicago was also pioneering feminist art education. Her Feminist Art Program at Fresno State College, for instance, simultaneously brought young female artists together and trained them to channel their experiences as women into their art, and to look to their female predecessors for inspiration. By 1973, Chicago had also co-founded the Woman’s Building and the Feminist Studio Workshop in L.A., which spearheaded an in-depth research project that uncovered the practices of Western women artists.
It was these experiences that propelled Chicago to “create a work of art that would educate a broad and diverse audience,” as she writes in an exhibition text. In 1974, this impulse began to take shape as The Dinner Party, and Chicago launched the process of selecting the women to be represented at her table. Books about women’s history, sourced for one dollar a pop at second-hand bookstores, became her fodder, and she recorded her findings on little notecards, which became a rolodex of heroines. (Both the cards and a selection of the books, with titles like Heroines of the Household and Women Painters of the World, are on view in the show.)
At the time, Chicago was also experimenting with new techniques. In the beginning of her career, she’d avoided approaches traditionally associated with what was derogatorily referred to as “women’s work,” but now she wanted to honor them as art forms. In step, she began to study china painting and needlework. These would become The Dinner Party’s material building blocks: Chicago envisioned the work as a massive banquet attended by 39 historical women, each represented by a porcelain plate and an embroidered runner alluding to their personalities and accomplishments.
In the exhibition, detailed, obsessively notated preparatory drawings for the plates and runners (which underwent many iterations) reveal Chicago’s painstaking process. So do works like Broken Butterflies/Shattered Dreams #3 (1976), which she made alongside The Dinner Party as something of a cathartic release. The piece comes from a series of painted porcelain tiles that Chicago smashed after she fired them. Judy Chicago, Cartoon for Entryway Banner #2—And She Made for Them a Sign to See from The Dinner Party, 1978. Courtesy the artist and Salon 94, New York. © 2017 Judy Chicago / Artists Rights Society (ARS), New York. 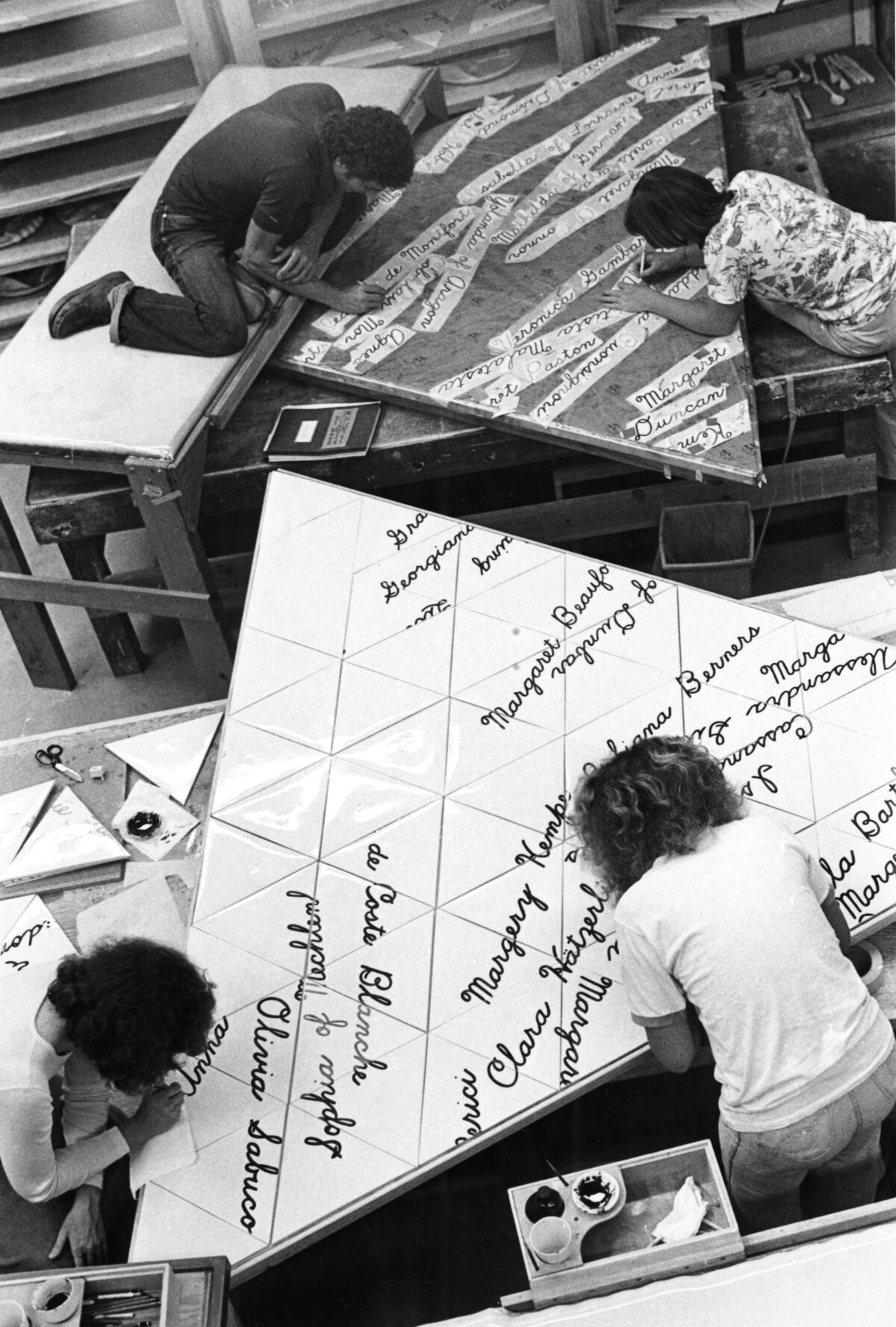 “The Dinner Party” Workers Painting Names on the Heritage Floor Tiles, 1978. Courtesy of Through the Flower Archive.

“They were a way of her trying to figure out how to use china painting,” Hermo explains of the body of work. “They were also a release of the frustration Judy was feeling when she realized she was just one woman facing down the epic problem of the lack of women’s representation in history.”
As Chicago’s research and skills developed, so did the scope of the installation. Additions included a floor upon which 999 additional women’s names would be inscribed, along with cutlery, chalices, chairs, and banners. Chicago acknowledged that she’d need help to realize her full vision, so she began to enlist research assistants and scores of volunteers to help with production, whether embroidering, painting ceramic plates, or scrawling the names of historical figures onto the 2,304 hand-cast porcelain tiles that would make up the floor.
Several posters soliciting help appear in the exhibition. “WANTED: Researchers in women’s history interested in working with artist and writer Judy Chicago on innovative and unusual project celebrating women’s culture,” reads one such notice. For Hermo, the posters “symbolize very different ways the studio reached out to budding feminists, artists, and hobbyists—people who were fascinated by ceramics and embroidery,” she says.
By 1977, Chicago’s Santa Monica studio was filled with helpers. Some 400 women and men would lend a hand before she completed the work in 1979. This collaborative effort reflected the network of feminist activists and artists that had begun to proliferate across the country. One photo in the exhibition shows an aerial view of the Thursday night potluck Chicago hosted for volunteers in the studio; a large group sits around a long table covered in tupperware, colorful plates, and shiny beer cans. 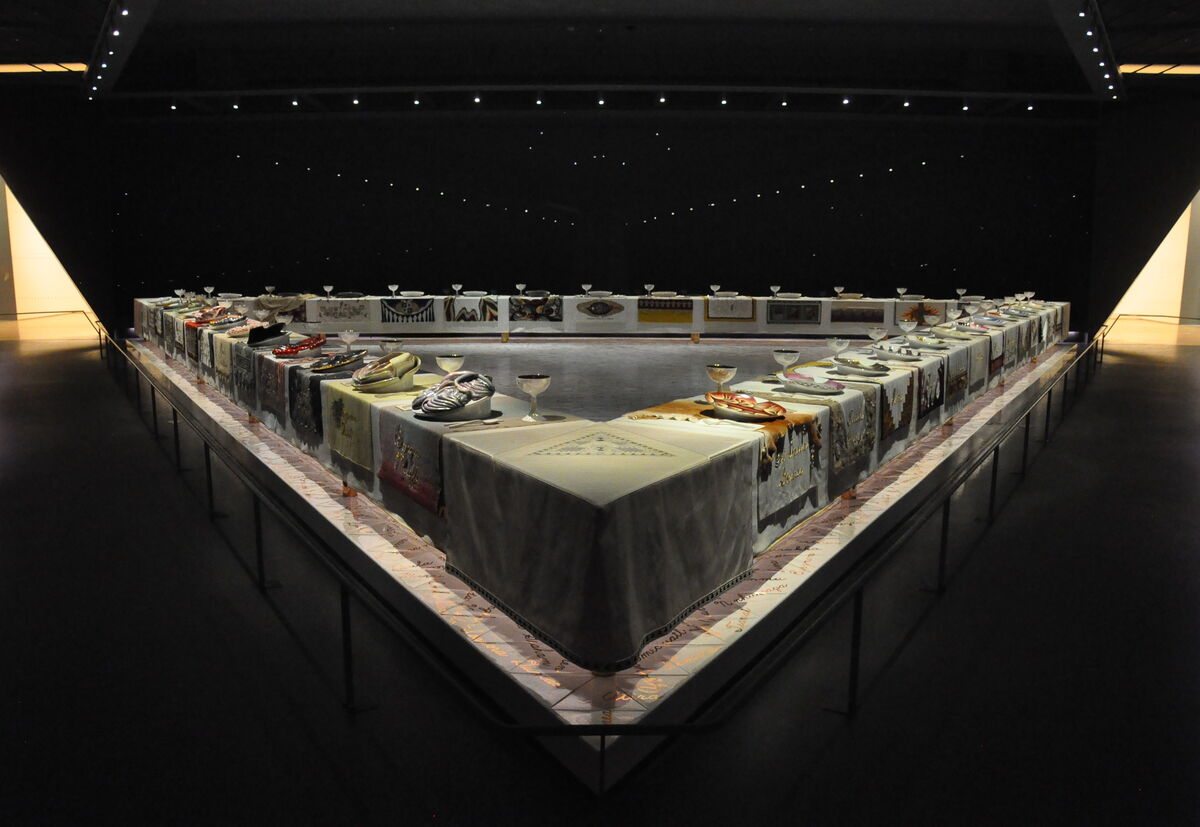 Another case holds the nametag of Diane Gelon, The Dinner Party’s project coordinator, from when she attended the National Women’s Conference in 1977. “Diane referred to [herself and the other volunteers who attended the event] as the weirdos in the room, because they were the only people talking about art,” Hermo recalls of a conversation she had with Gelon. “But they actually ended up bringing a lot of people on through these engagements with activism. They were really reaching across the aisle.”
When The Dinner Party was finally unveiled in 1979, with settings for overlooked figures from Hatshepsut and Artemisia Gentileschi to Mary Wollstonecraft and Georgia O’Keeffe, it drew a record-breaking 100,000 visitors to SFMOMA. While the work was slated for a museum tour, controversy around its vulvar imagery led many museums to withdraw, and forced Chicago and Gelon to crowdfund an alternative tour to lesser-known art and activist spaces.
The Brooklyn Museum wasn’t put off, however. The institution installed the piece for a short time from 1980 to 1981. There, The Dinner Party again became a site of female empowerment, conversation, and questioning. A guestbook from that installation is included in the current exhibition, and reveals a range of responses from visitors, from laudatory to critical. One woman writes that the work changed her life, while just across the page another chides Chicago for including primarily white, Western women. 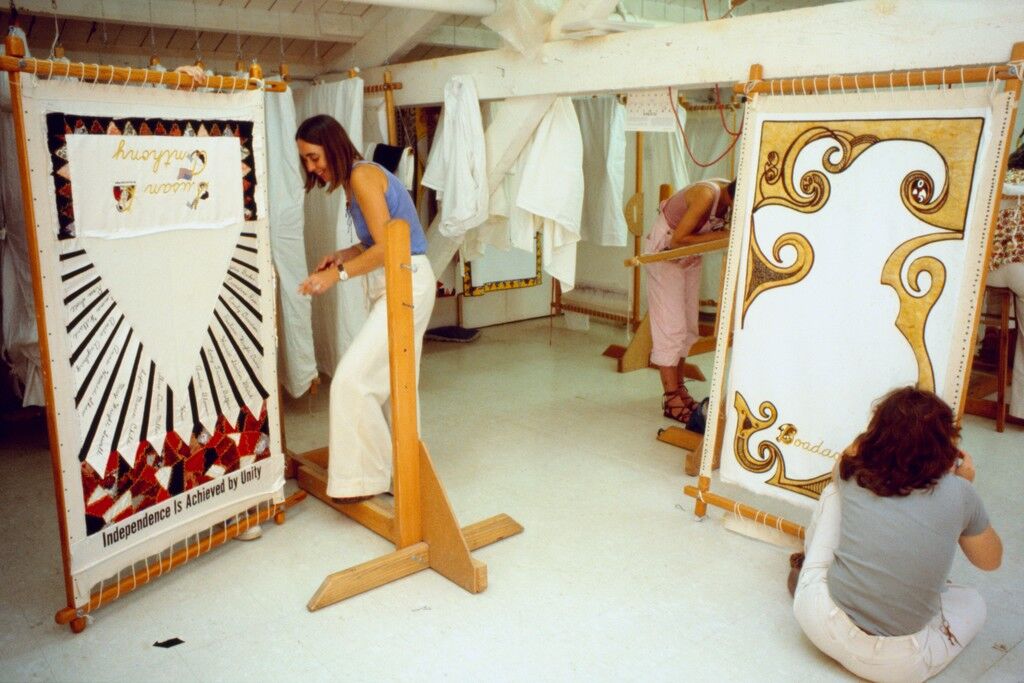 Judy Chicago
“The Dinner Party” Needlework Loft, 1977
Brooklyn Museum
The comment book is one of several elements highlighted in the exhibition that point to criticisms of the piece. An in-depth case study by Hermo into the plate representing Sojourner Truth, the only black woman included in the banquet, underscores The Dinner Party’s exclusions, for instance.
These are inquiries that the Brooklyn Museum, which has owned The Dinner Party since 2002, welcomes. “[Chicago] sets the table as an invitation for visitors to bring their own questions to it,” explains Hermo. “And that’s something we like to encourage.” The museum’s education and teen programs use The Dinner Party to pose queries like: “Who would you put in your dinner party?” “Who is left out?” “Who would you include from the 20th century?”
Chicago also acknowledges that her magnum opus, as large and legendary as it is, is merely a starting point. “The Dinner Party is intended as a symbol of women’s history,” she writes in another exhibition text. “As such, it merely suggests the thousands of untold stories and unsung heroines who deserve attention, honor, and a place at the table.”
Alexxa Gotthardt
Related Stories 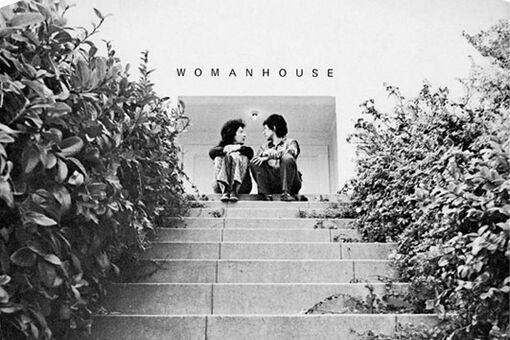 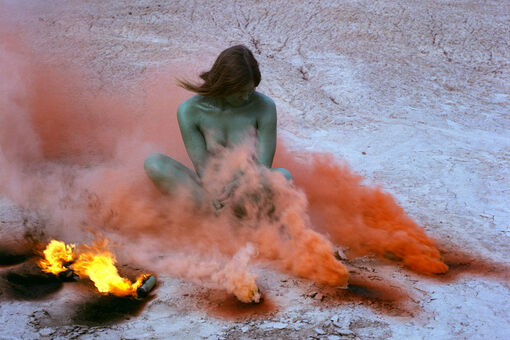 When Judy Chicago Rejected a Male-Centric Art World with a Puff of Smoke
Alexxa Gotthardt
Jul 26, 2017 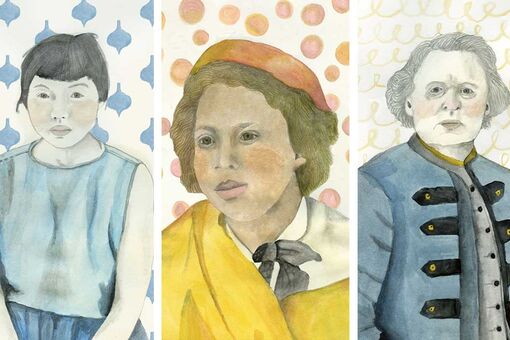 These Women Were Missing from Your Art History Books
Alexxa Gotthardt
Apr 19, 2017 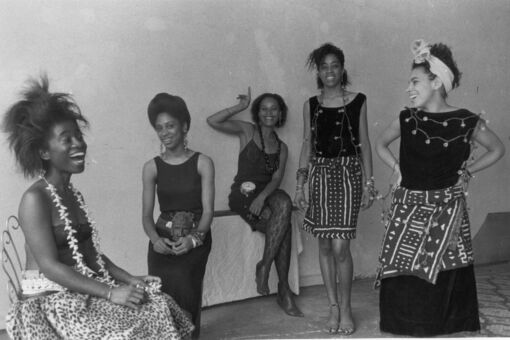