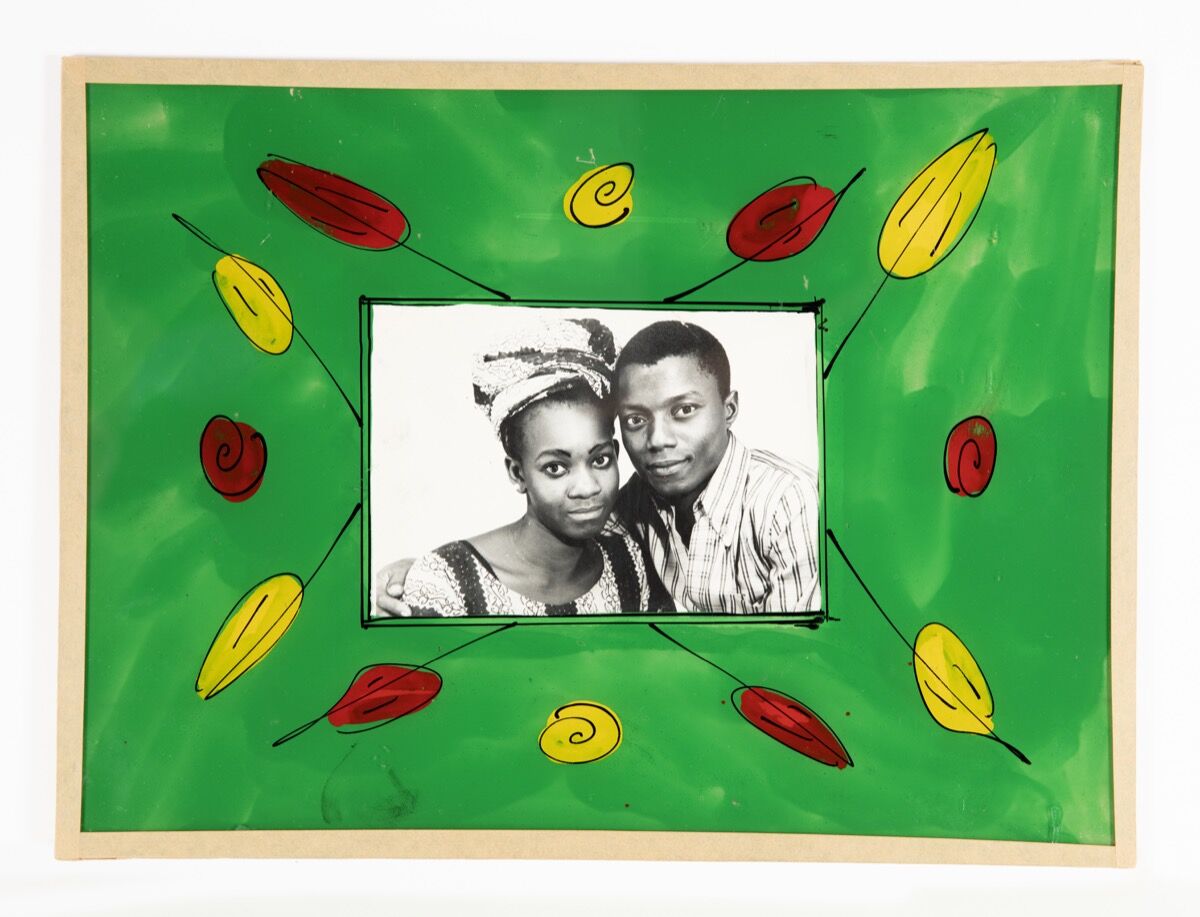 Beginning in the 1960s and continuing for the next five decades,
Malick Sidibé
photographed the citizens of Bamako, Mali, in bold black and white. In his studio, he took pictures of locals—a man in a beret and pinstripes, a trio of women in sunglasses—often dressed stylishly and posed assertively. The photographer also brought his camera out on the town. Well-clad youth became his muse, dancing and reveling in intimate groups at Happy Boys Club, Le Surfs, and other local hotspots. Sidibé’s prints are casual, personal, and improvised. They tell the story of a city’s evolution.
Sidibé was born around 1935 in the rural French Sudanese village of Soloba (located in the southwest of present-day Mali, near the Guinea border). He attended a school for Sudanese craftsmen, studying painting and jewelry making. After graduating in 1955, he secured a job as an apprentice to French photographer Gérard Guillat. Sidibé began to take his own shots in the latter half of the decade, focusing on portraiture. In 1958, he opened his studio, Studio Malick, and the community swiftly began seeking his services for special occasions—and for fun. 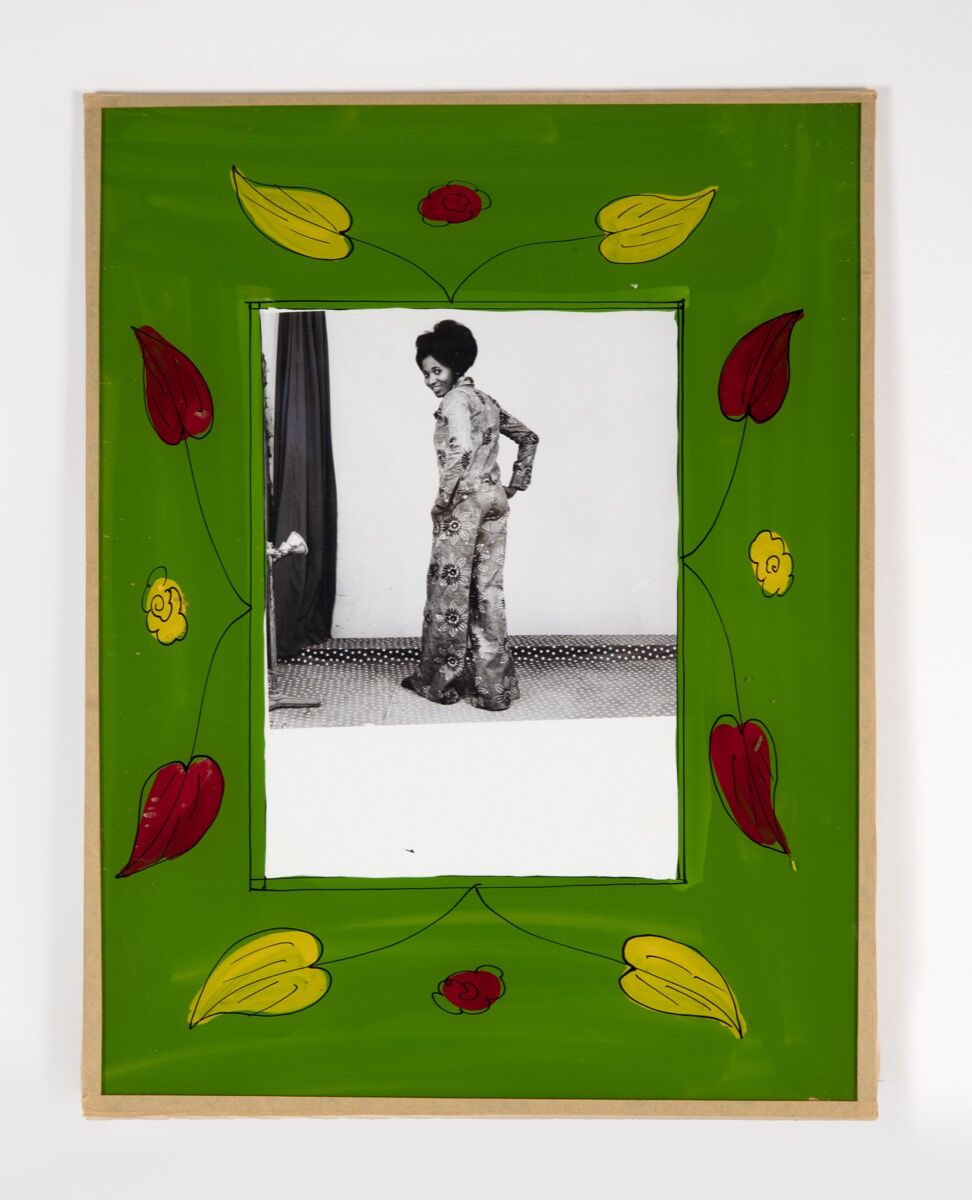 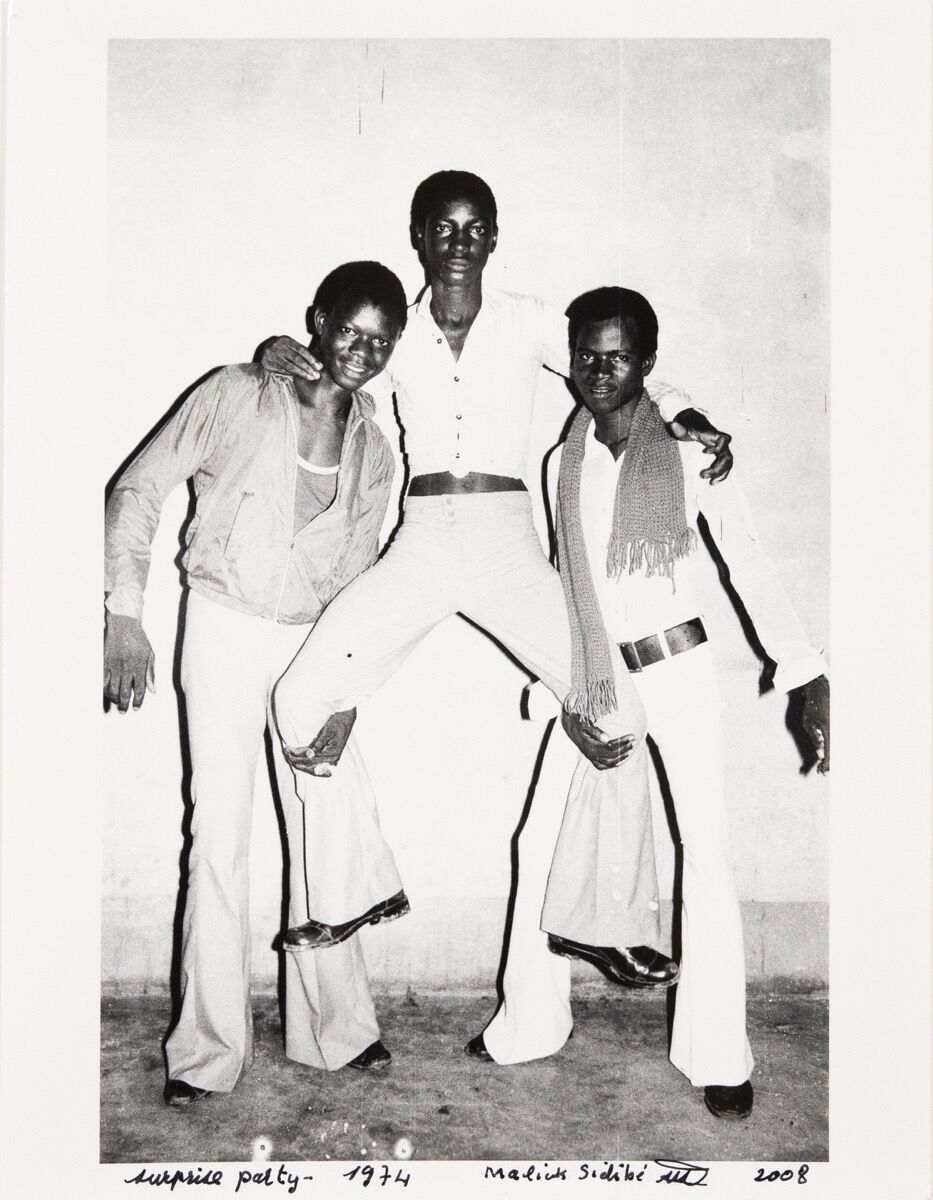 At the time, his country was in the midst of a major political overhaul. Mali gained independence from France in 1960 and became a socialist single-party state. Relative freedom enlivened the region until a 1968 coup. The Military Committee for National Liberation (CMLN) took power, with lieutenant Moussa Traoré at the helm as president. A military dictatorship followed, until a 1974 constitution returned the country to a single-party state. Civil unrest and additional coup attempts plagued the country into the 1990s.
But during the 1960s and into the early 1970s, Sidibé captured Bamako’s newfound liberation, shooting the city’s joyous nightlife. (Though the party pictures would cease, the artist’s studio portraiture continued throughout the following decades.)
The photographs from this era offer stories of celebration tinged with American and British cultural influence. In TWIST! Avec Ray Charles (1969), a woman in a boldly patterned dress and a feathered, polka-dotted hat holds the titular Ray Charles record. Les copins à Niarela (1967) features a group of smartly attired partygoers huddled together around a record player. In the days after capturing such evening festivities, Sidibé printed the pictures and posted them in front of his studio. Recovering revelers would stop by to see if they were in the shots, turning the spot into a community hub and a kind of proto-social media feed. Sidibé sold the prints for a very affordable 100 to 200 francs. 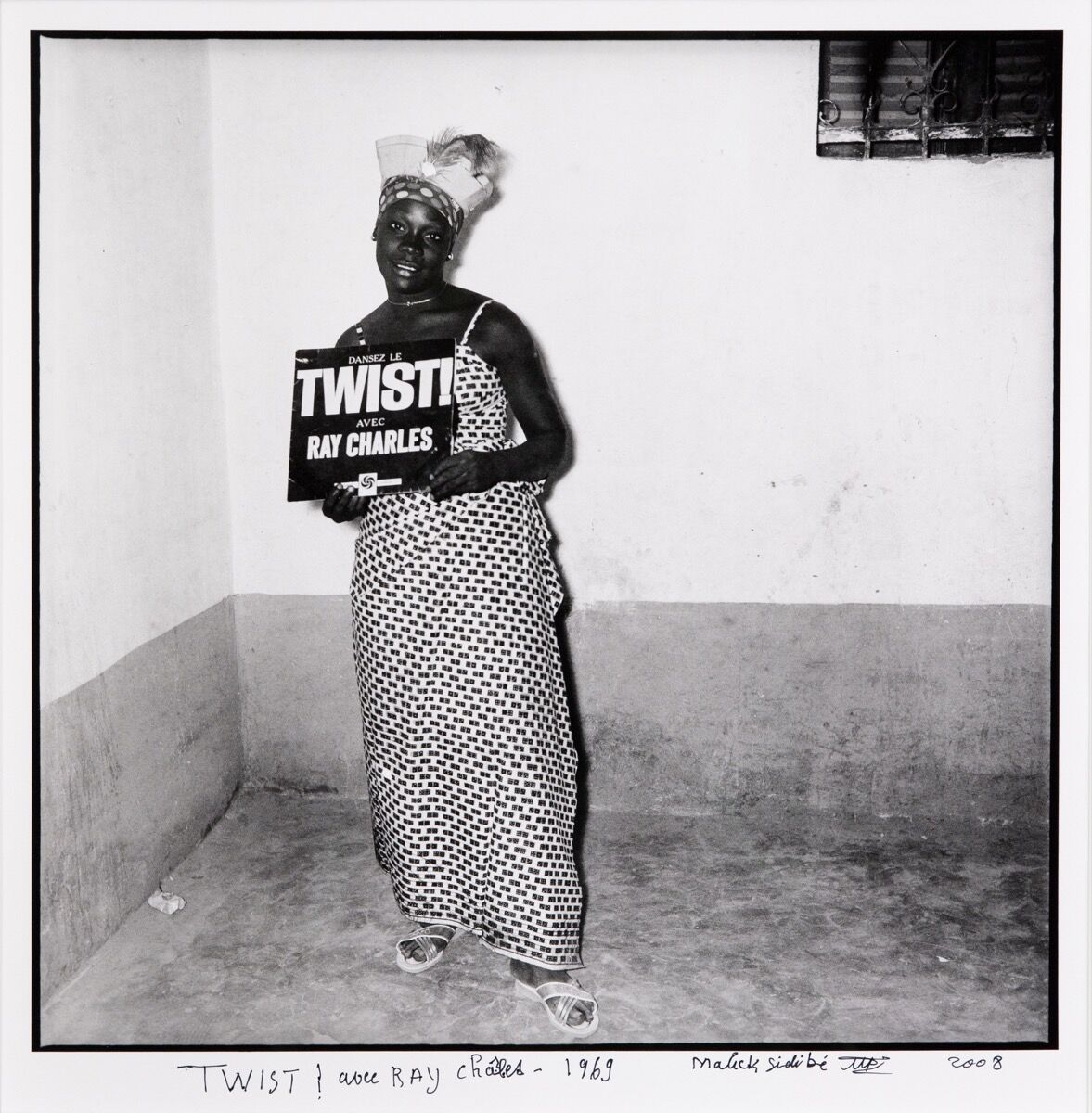 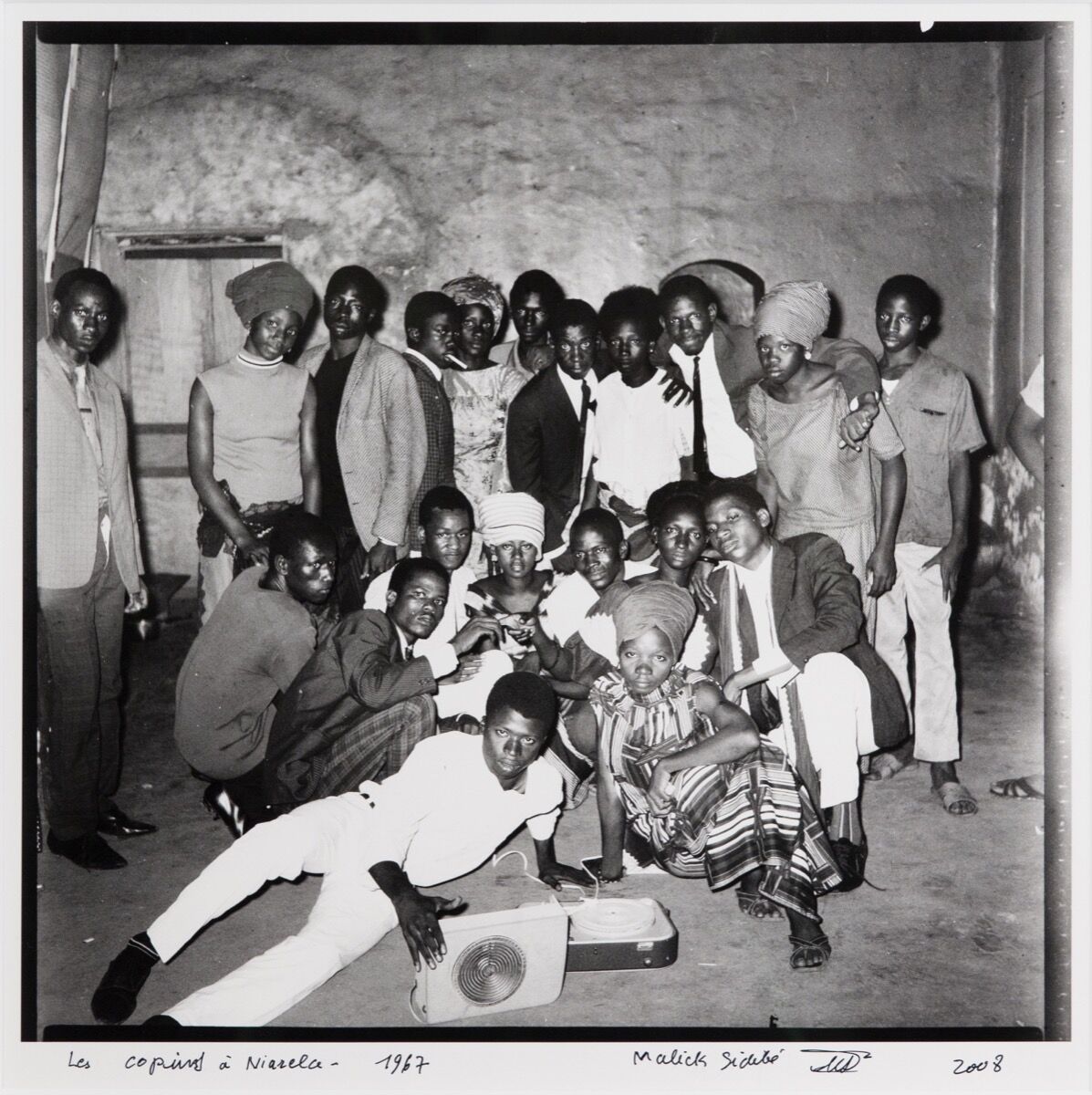 Advertisement
In the 1990s, French curator André Magnin visited Mali and came across Studio Malick. He introduced Sidibé’s work to France, and a variety of international honors followed. Paris’s Cartier Foundation for Contemporary Art honored the photographer with his first exhibition outside Africa in 1995; he would later land the prestigious Golden Lion prize at the 2007 Venice Biennale. If Sidibé’s camera initially captured the influence of the West on Malian culture, his photographs now had the opportunity to likewise influence Western artists.
“The world took note of these images of Malian youth in this free moment of self-expression,” says Alexandra Giniger, director of artist relations at Jack Shainman Gallery, which has represented the artist since 2002. “Once Malick’s work started being viewed in Europe and the [United] States, it was like a new presentation of the continent of Africa.”
In an essay titled “The Sixties in Bamako: Malick Sidibé and James Brown,” Manthia Diawara writes that Sidibé’s nightlife photographs made local youth “look like the rock and roll idols and movie stars they wanted to be.” As they vamped for the artist, the subjects asserted their independence, relevance, and ultimately, their power. At a time of nationwide change, their self-presentation promoted what Diawara calls a “diasporic aesthetic.” 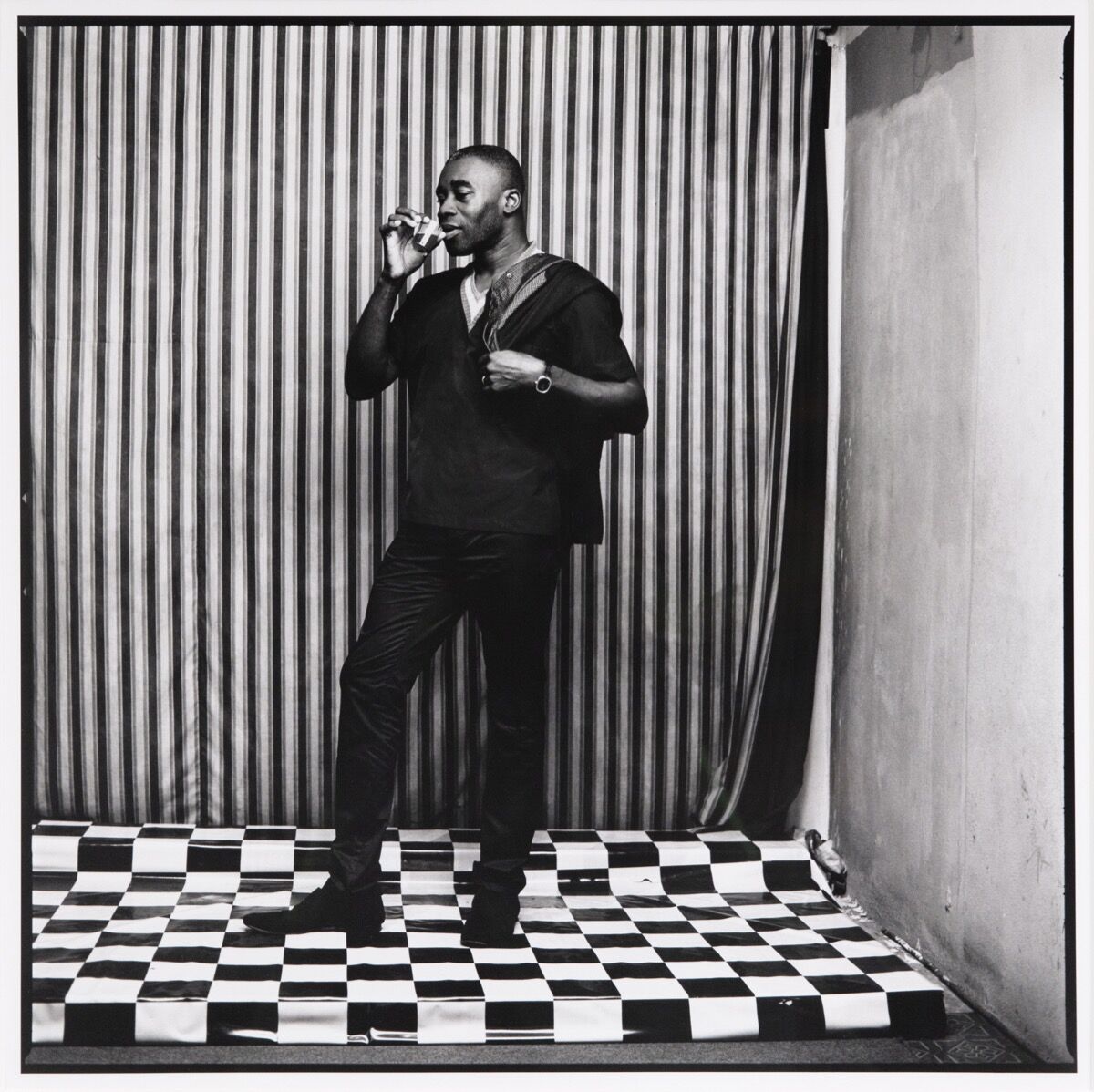 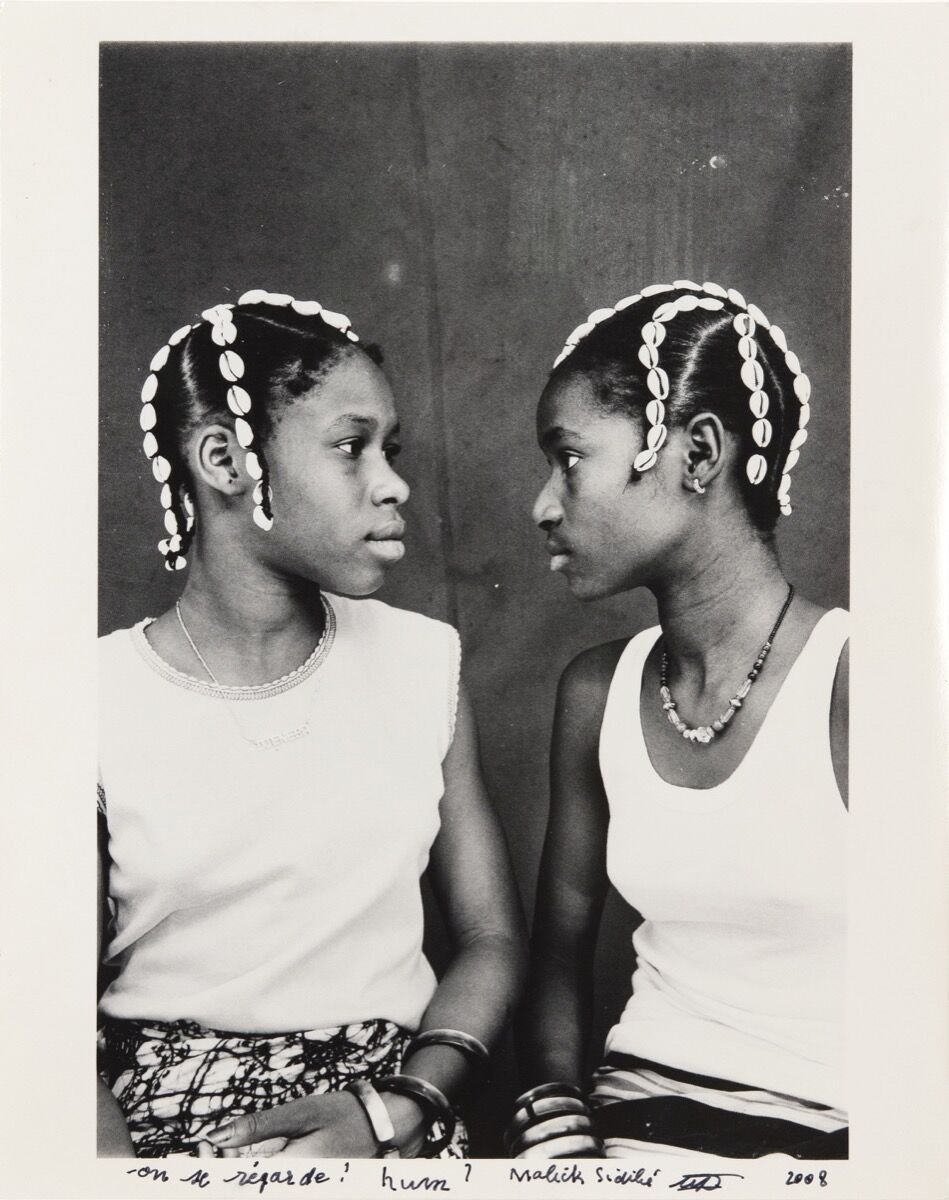 As fans of James Brown, for example, Malian youth connected with ideas of black pride that were circulating in the United States. Listening to rock ‘n’ roll and naming their cliques after bands (The Beatles, The Rolling Stones), they integrated into the global countercultural revolutions of the era. Invoking popular culture, this generation rejected their predecessors’ conception of a world split between the colonizers and colonized. Sidibé captured this shift.
Chelsea’s Jack Shainman Gallery has mounted 85 Sidibé photographs in its current exhibition, entitled “LOVE POWER PEACE.” British artist
Chris Ofili
appears in a suite of four images. Despite the subject’s prominence, Sidibé gave Ofili the same treatment in Bamako that he’d offered to all his guests over the years: The painter stands on a tiered platform (covered, this time, in a shiny checkerboard pattern), facing a striped curtain. One shot features Ofili and Sidibé together, smiling at the camera. The informality and geniality of the shoot radiates.
Jack Shainman is also spotlighting Sidibé’s wedding photographs and baby pictures—happy occasions take center stage. Brightly hued glass frames with whimsical leaf motifs (edged with brown tape and made by a Bamako glass artist, Sidibé’s long-standing collaborator) enhance a sense of ease and cheerfulness.
7 Images
View Slideshow 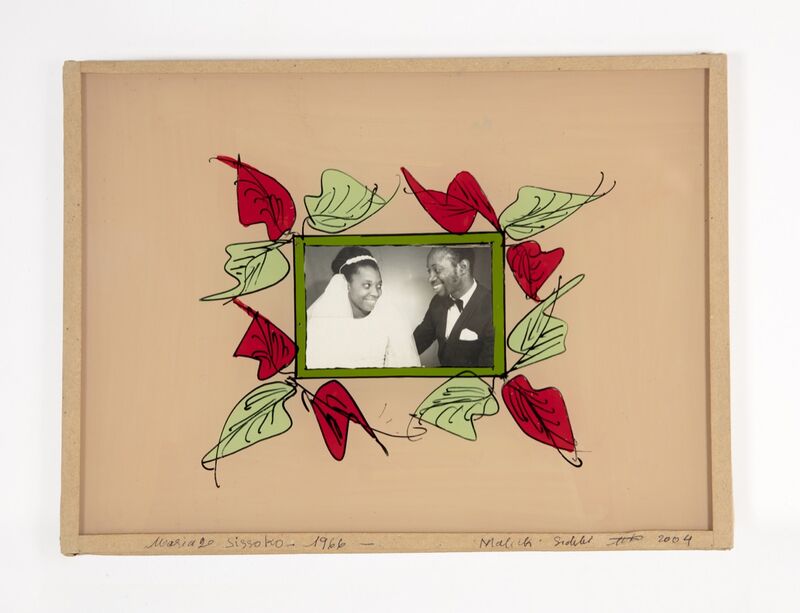 Sidibé’s baby pictures are particularly winning. With their chubby legs, diapers, and miniature wardrobes, the subjects offer gazes both innocent and confused; the most authentic returned gazes that Sidibé’s camera captures. The kids all sit in chairs draped with patterned fabrics. Bamako’s youngest citizens reign on tiny thrones that convey tradition, craft, and local culture.
The studio portraits of adults, meanwhile, are often theatrical. A man in a wide stance holds pistols in both hands, aimed at the viewer. Two women stand with their backs to the camera, reading a manuscript. A woman in a burka sits behind a tray of cups and a samovar. There’s a often a sense of confidence, self-determination, and play.
Sidibé died in 2016. The next year, the Cartier Foundation for Contemporary Art hosted a major exhibition of more than 250 of his photographs. The artist’s international fame may have reached its apotheosis when, later that year, Beyoncé hosted a baby shower inspired by his aesthetic. A picture from her party features the pop star in a patterned skirt, dancing with Jay-Z. Dressed in all white, he wears a necklace with a black pendant in the shape of the African continent. Sidibé’s spirit of improvisation, liberation, and pan-African exuberance lives on, far beyond the confines of any gallery or national border.
Alina Cohen
Related Stories

Once Discarded, These Historic Studio Portraits of African Americans Are Now on Display at the Met 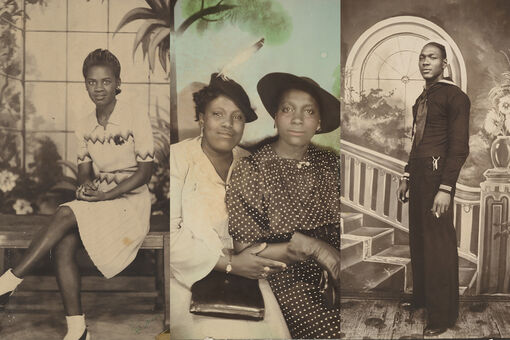 Once Discarded, These Historic Studio Portraits of African Americans Are Now on Display at the Met
Alina Cohen
Jun 26, 2018