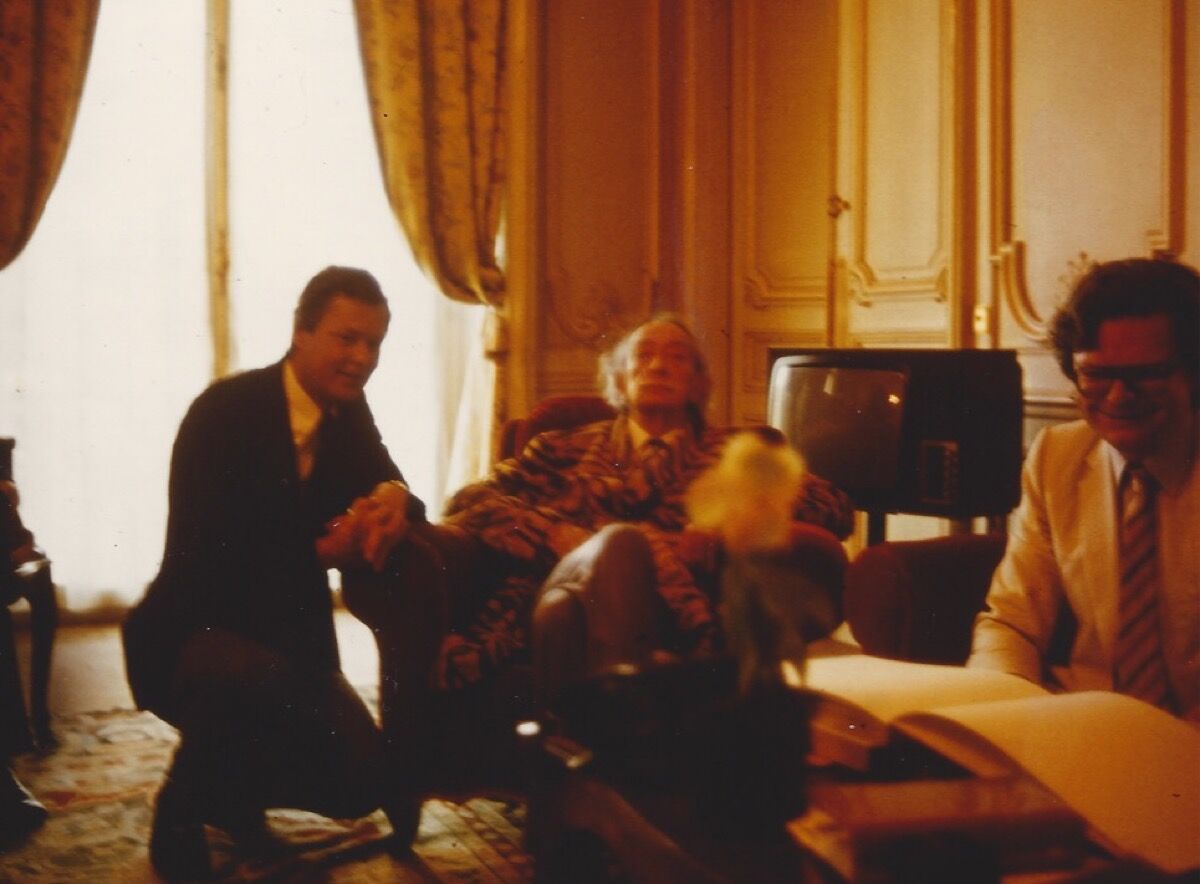 In 1976, German lawyer Peter Ackermann made a momentous purchase: He bought 60,000 ceramic tiles designed by
Salvador Dalí
. And he didn’t have a clue what to do with them.
The events that led to the purchase trace back to years earlier, when one of Ackermann’s clients was struggling financially and couldn’t afford to pay his legal fees. In lieu of payment, he offered to arrange a meeting between the lawyer and the Spanish artist Dalí, with whom the client had a connection through his wife, an old friend of Gala Dalí, the
Surrealist
’s wife. Ackermann took him up on the offer.
Months later, while on business in Paris, where Dalí lived, Ackermann met with the client’s wife, and together they went to Restaurant Lasserre, one of Gala’s favorite spots. They had a waiter deliver their business cards to the table where the Dalís were dining.
“They waived me to their table and we had some nice conversation,” Ackermann recalls. “Fortunately, I spoke French (you don’t speak English or German to Salvador Dalí), and they invited me for tea the next day in their apartment at Le Hotel Meurice.”
A photograph picturing Ackermann kneeling beside Dalí immortalizes that meeting. (“That’s what you should do when you’re in the presence of the god of the Surrealists,” says Ackermann.) In the image, Dalí sits in a large armchair wearing a tiger-striped robe and a stoic expression. They exchanged pleasantries and discussed art and work, Ackermann recalls. Before departing, the lawyer agreed to work with the Dalís’ secretary on some of the artist’s financial deals. 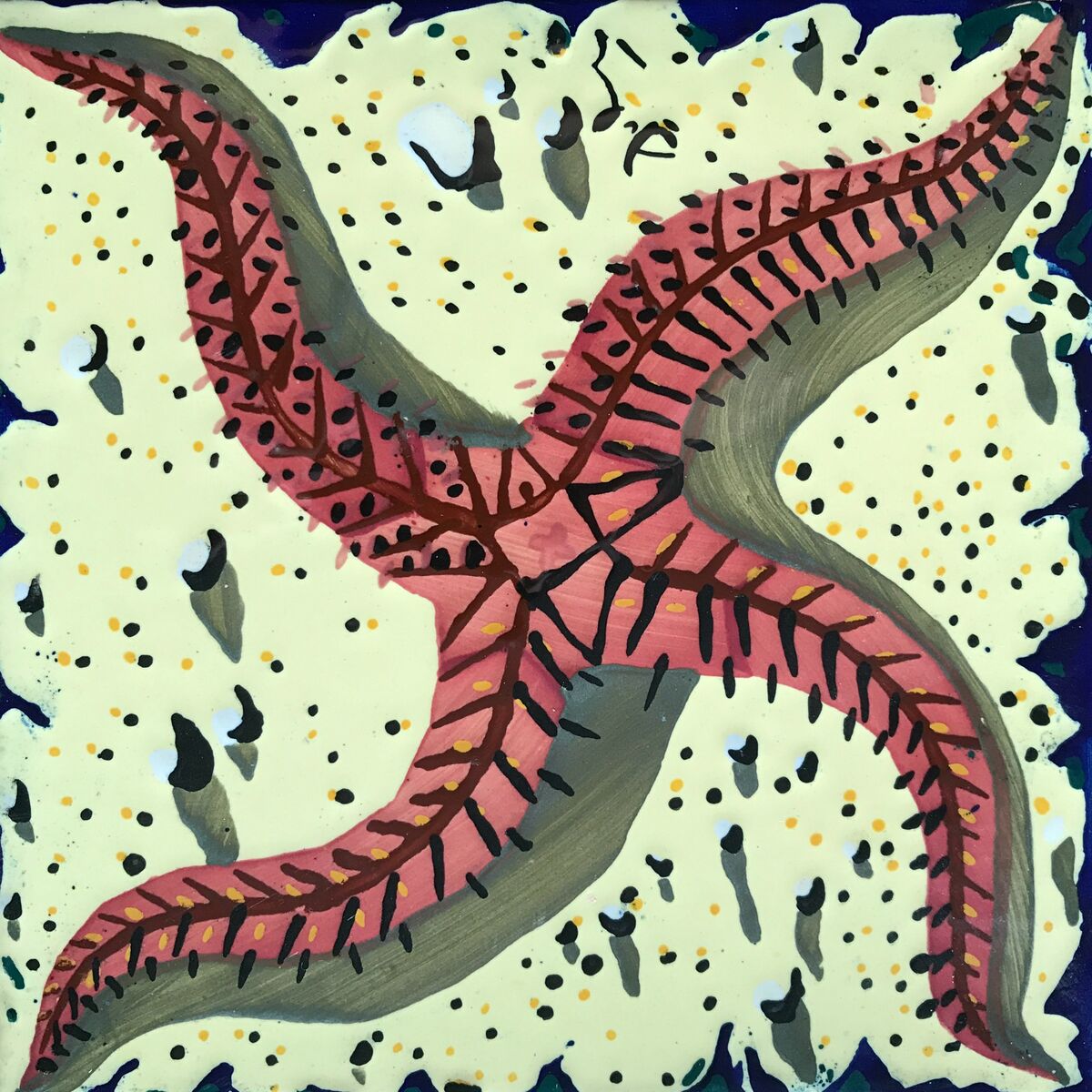 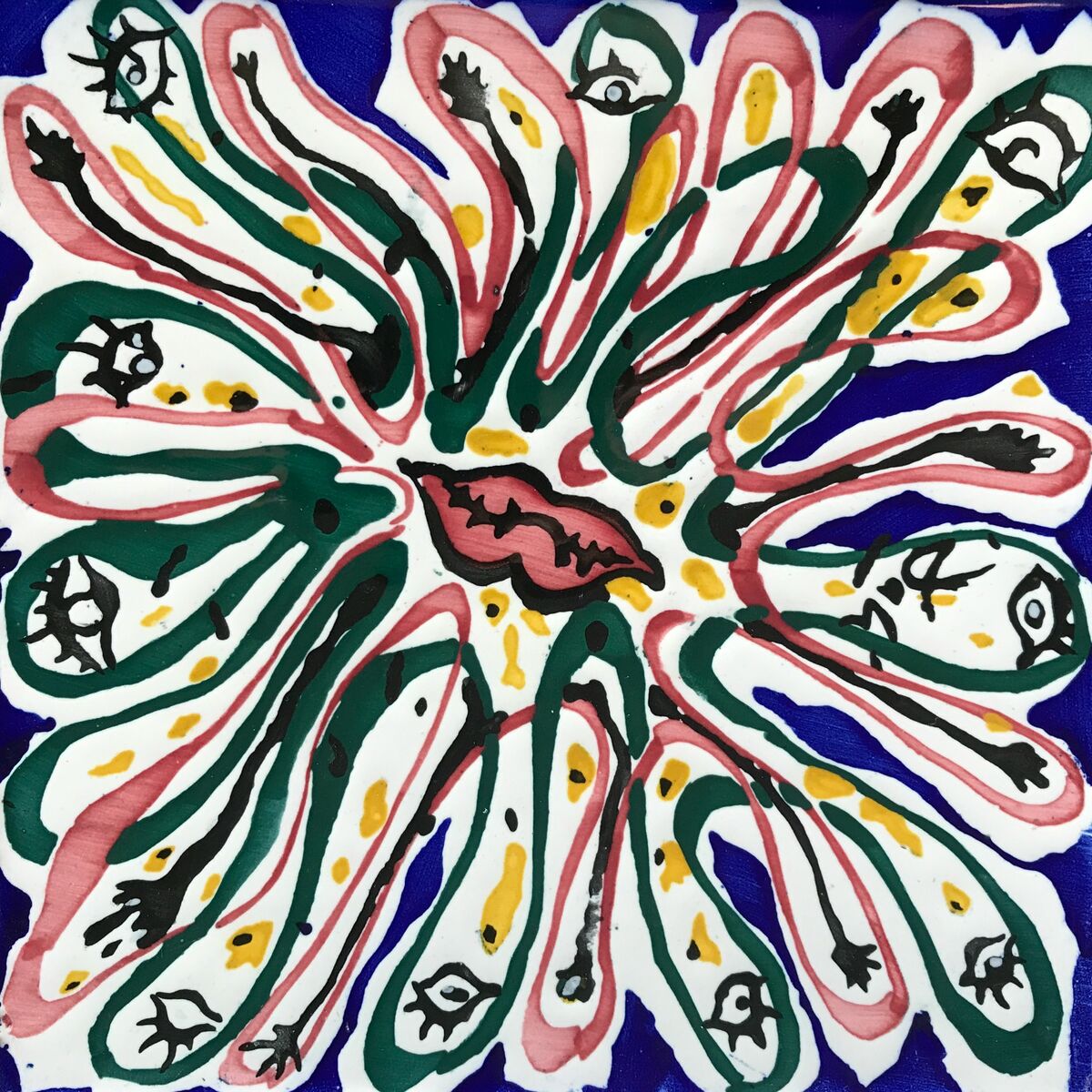 A couple of years later, Dalí contacted the lawyer, in need of a buyer for a collection of tiles he had produced in Spain two decades before. From the original run of 100,000 tiles, 60,000 remained. Ackermann bought them all.
“Look at the man,” Ackermann explains, remarking on his prized photo. “Look at me 40 years ago, sitting right next to the big master. Whatever he sells to you, when you can afford it, you buy it. You don’t think twice. It’s like being offered a piece of cake by the inventor of sachertorte. You don’t turn it down, even if you’re not into cakes.”
The tiles were produced in Onda, Spain, in 1954, at the El Siglo tile factory. (Today, the company is known as ADEX). It’s fabled that a minister of culture from within Francisco Franco’s government originally commissioned them for the interior of a swimming pool.
The 20-centimeter-wide tiles come in sets of six and are titled “La Suite Catalane,” referring to the region of Spain from which Dalí hails. Based on paintings, the tiles feature loose, brushy motifs, like lips, birds, and a sun, in a palette of rich primary colors and pastels. The standout tile, titled L’étoile de Mer, is most typical of Dalí’s style; it portrays a four-legged red starfish, splayed across sandy terrain. 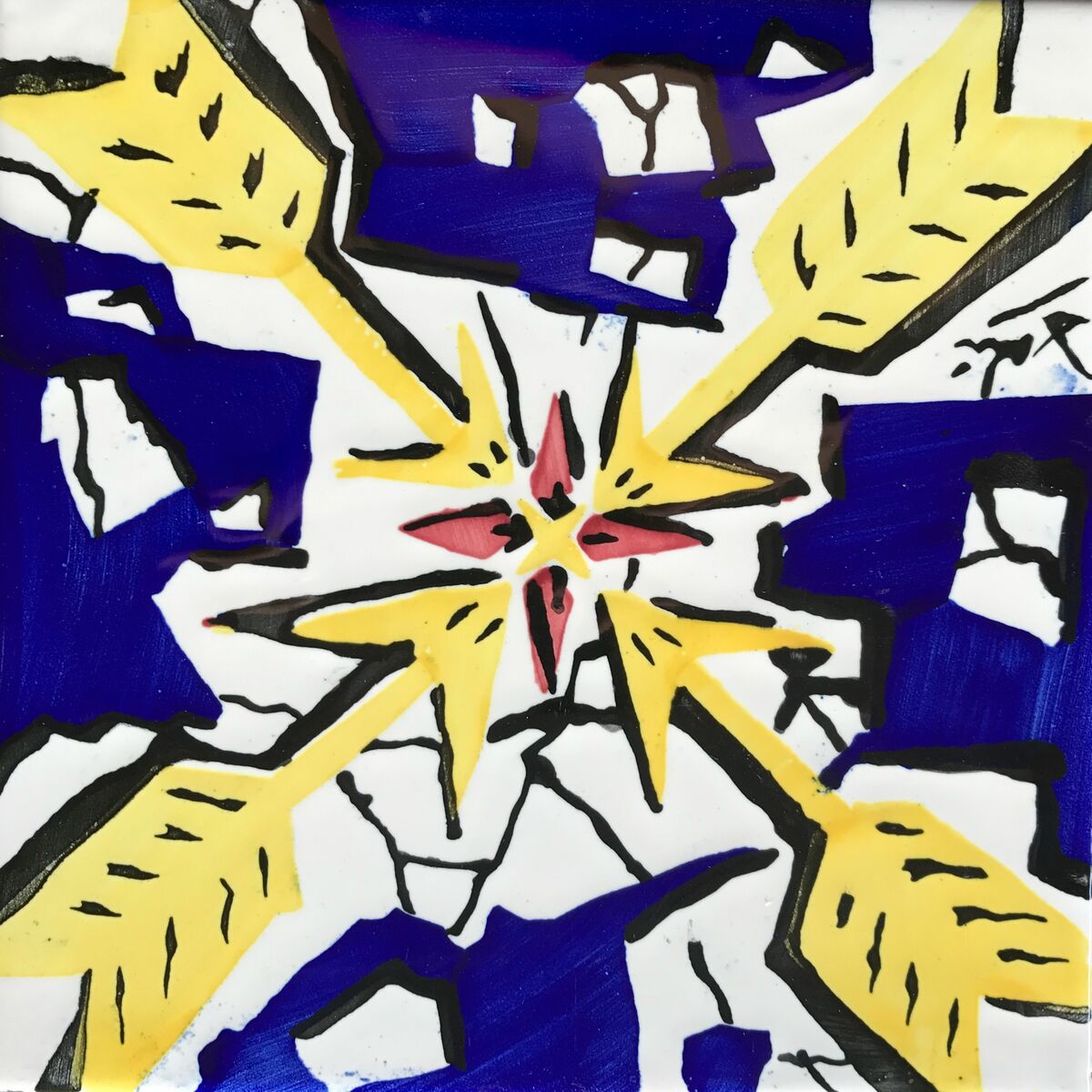 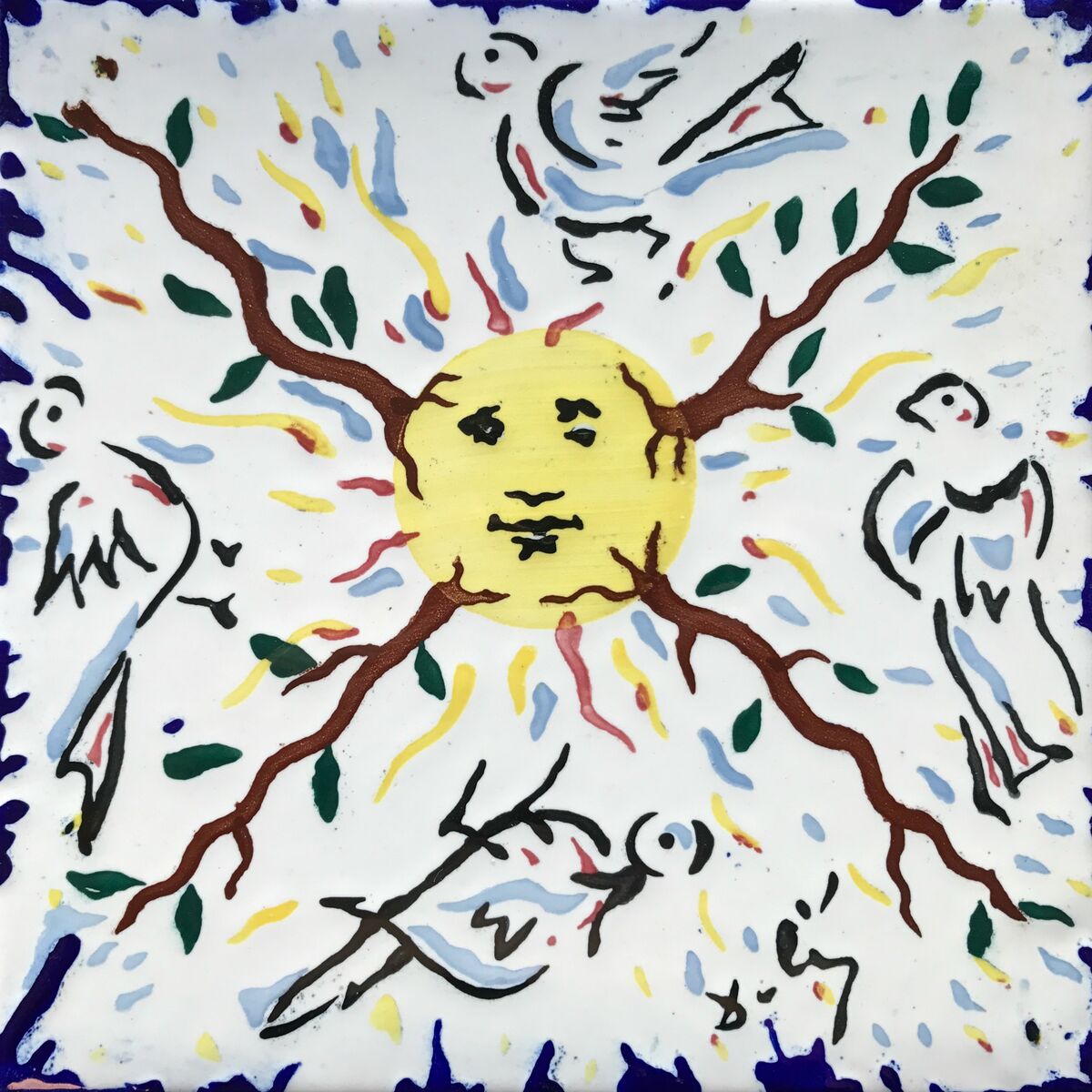 Advertisement
Ackermann has kept the entire cache for some four decades, though work and family kept him from doing anything with them. Over the years, the price of storing and transporting them has added up to a considerable cost. The tiles weigh some 44 tons and were originally kept in Zürich, where Dalí had them stored; then Ackermann moved them to Berlin. Ackermann estimates he’s spent a “serious seven-figure” sum on the tiles over the years. He has never tried to sell them—until now.
“When you have a beautiful old-timer, a Studebaker-Packard in your garage, you can probably sell it to some old car fan, but if you have 60,000 of them you have a problem,” Ackermann quips.
Now, as he approaches 80, he is actively looking for a buyer, with the intention of donating the proceeds to his foundation, Kreuzberger Kinderstiftung, which provides education for underprivileged children. The other 40,000 tiles from the original run have sold in private sales and auctions over the years, and according to Ackermann’s research, they have fetched as much as $2,300 for a set of six, and over €500 for just one.
Due to the tiles’ sheer quantity, Ackerman believes it’s unlikely he will attract a single buyer; laid out side-by-side, the tiles are said to cover a third of a football field. “I don’t think there is another weirdo like myself who would want to own 60,000 of these,” he says with a laugh.
He’s adamant, though, that they should not be used for a pool. “Each one of these beautiful pieces is an eye-catcher,” he notes. “They are very nice to be displayed over a large surface—not inside a swimming pool.”
Cover image: Portrait of Salvador Dalí courtesy of Henryk Seeger.
Casey Lesser is Artsy’s Lead Editor, Contemporary Art and Creativity.
Related Stories