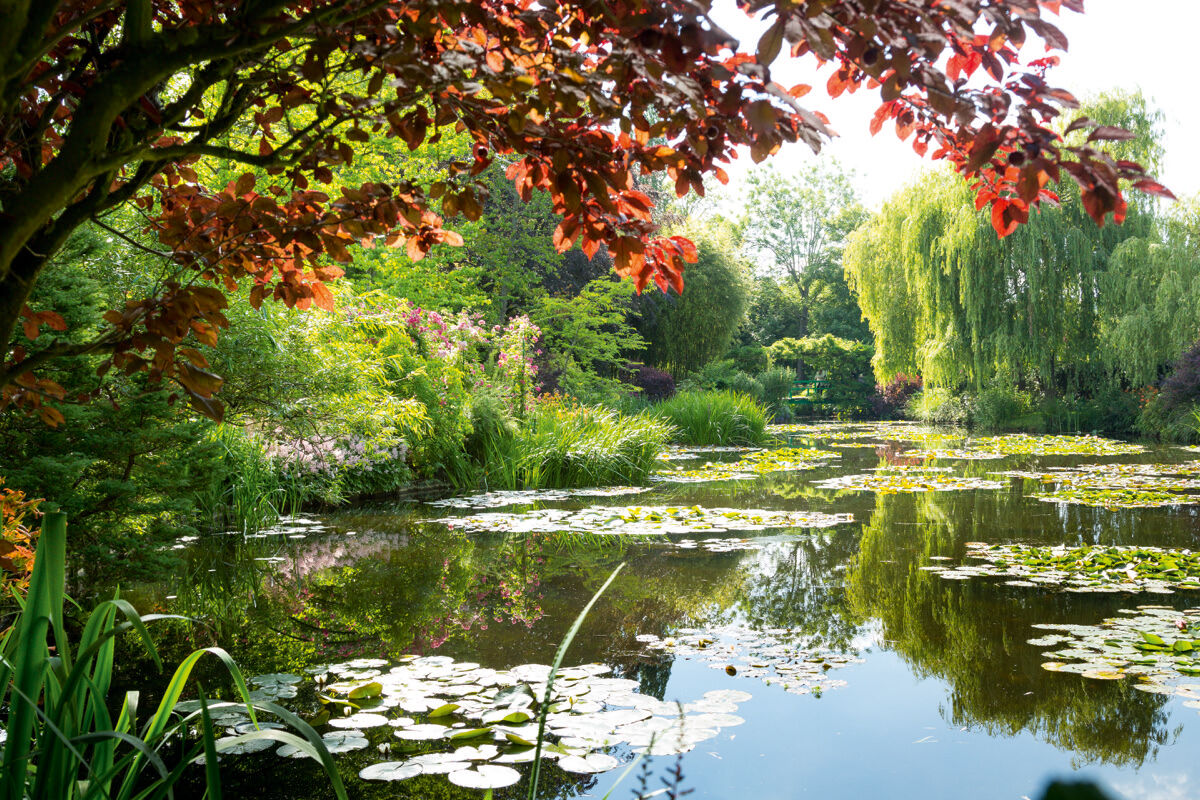 Each year, from late March to early November, more than 500,000 people travel to Giverny, France, to visit a place they’ve primarily seen in paintings.
They arrive to find a charming pink farmhouse with emerald-green shutters, set among brilliant flowerbeds that overflow with tulips, lavender, or sunflowers, depending on the season. They follow signs to a tunnel, and are led to an oasis of weeping willows and bamboo shoots, where they can amble along a pond packed with waterlilies, before crossing a familiar Japanese footbridge cloaked in wisteria.
More than just the idyllic inspiration and open-air studio behind some of the world’s most famous paintings,
Claude Monet
’s gardens in Giverny have long been understood as a total work of art in their own right. (In 1907, Marcel Proust wrote in an essay that Giverny was a “transposition of art.”)
Today, the
Impressionist
master’s home and gardens—where he lived and worked for most of the second half of his life—are a site of pilgrimage for not just art lovers but botany buffs, sightseers, and wanderlust addicts alike. Recently, on July 10th, Jean-Yves Le Drian, French Minister for Europe and Foreign Affairs, announced that the site would be a candidate for a UNESCO World Heritage Site designation. That achievement is due in no small part to Gilbert Vahé, Giverny’s head gardener.
On a cool July afternoon, I met Vahé in Monet’s gardens. Slight and bespectacled, he wears a simple straw hat, polo shirt, and leather shoes. His fingernails, encrusted with earth, are the only clue that gives away his expertise—though shortly after we’re introduced, as we pass by hordes of visitors to reach a relatively quiet place to chat, he launches into a critique of some nearby irises. 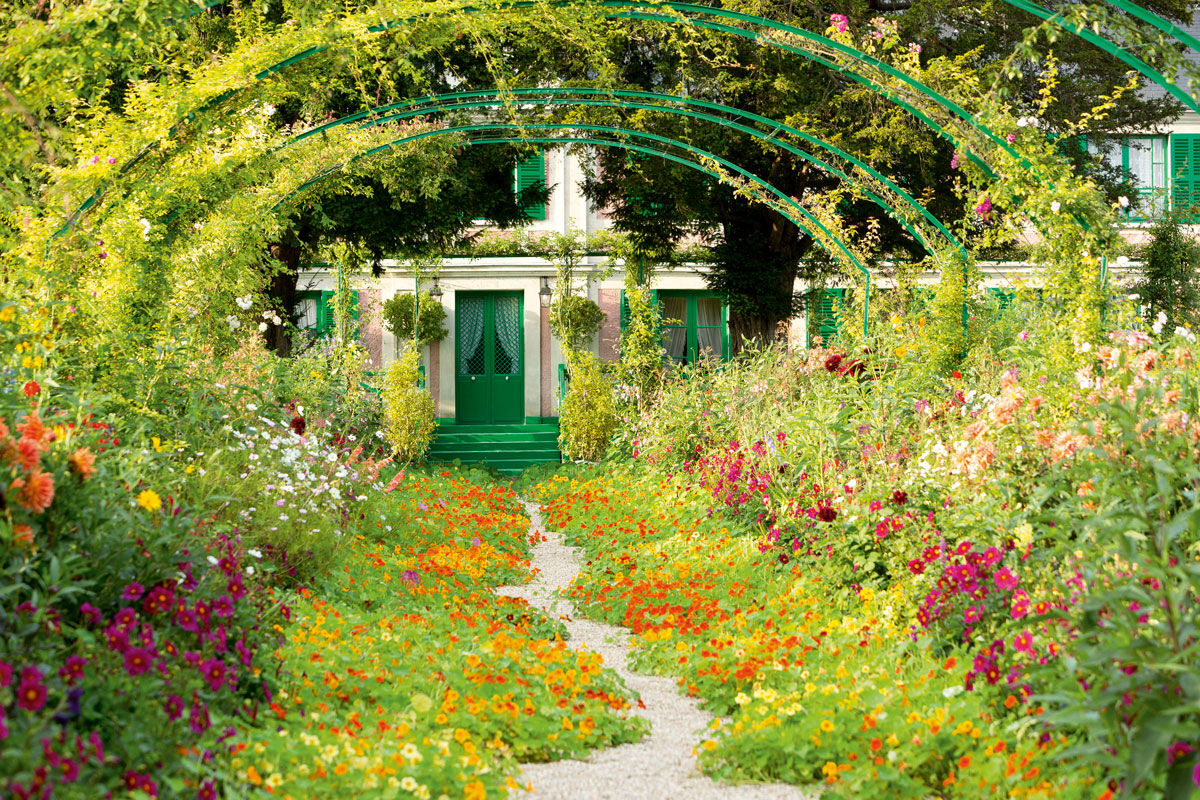 Vahé has worked at the gardens for some 35 years, from 1977 to 2011—after which he retired temporarily—and since January 1, 2017. This year he resumed his position as head gardener after the departure of Englishman James Priest, who served in the role for the past six years. Vahé lives next door, where he keeps his own garden—which is a sight in itself, often stopping tourists in their tracks on their way to Monet’s home.
As we walk through the Clos Normand—the main garden beside Monet’s former home, which occupies nearly a hectare of land—we settle at a small, pebbled clearing, lined with three curved benches, which were designed by Monet.
Vahé’s post at Giverny began with the restoration of the gardens in 1977. While Michel Monet, the artist’s son, had left the property to Paris’s Académie des Beaux-Arts upon his death in 1966, with a view for it to become a museum, it went untouched for a decade. An initiative to revive the garden eventually materialized thanks to the French philanthropist and curator Gérald Van der Kemp, who is also known for spearheading the restoration of the Palace of Versailles, and who would go on to become the first director and curator at Giverny. In 1970, he set up the Versailles Foundation in New York, which was backed by American patrons, and would also fund Giverny. But it was not until an auspicious meeting with Vahé that the gardens really began to take shape.
Vahé was born some 30 kilometers from Giverny, in a town southeast of Paris, and pursued a career in horticulture at the École Nationale Supérieure d’Horticulture in Versailles, with the intention of becoming an orchid specialist. He would ultimately set up his own landscaping business instead, and it was just after shuttering that venture—when he grew tired of dealing with finances and customers—that he was introduced to Van der Kemp. The head of the school in Versailles connected the two men, knowing that Vahé needed work and Van der Kemp was looking for a skilled horticulturist. 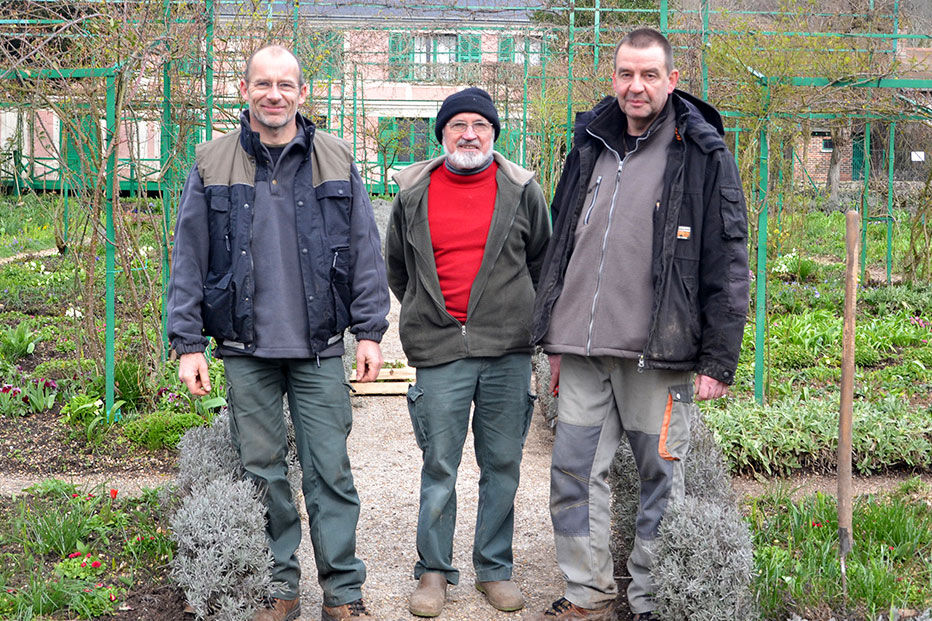 Advertisement
Vahé believes the job was his destiny, admitting that he never (“Jamais!”) imagined having such a job when he chose his field of study.
He recalls that at the time, in 1976, Monet’s gardens were largely unknown in France, save for intellectual circles; even in the nearest town of Vernon, just six kilometers away, shopkeepers were unaware that the famous artist had lived there. (Today, visitors arrive in throngs at the Vernon rail station, before making their way to Giverny.) Taxi drivers in New York, he quips, were more likely to know about Van der Kemp’s restoration.
The process of revitalizing the gardens was slow, spanning a long four years. Vahé worked alongside a team of fellow gardeners, including one who had worked alongside Monet himself, while Van der Kemp conducted research that would help to determine what should be planted and where. None of the plants from Monet’s time had survived, and the land was overgrown with grass and weeds. They took cues from the artist’s letters, oral accounts from relatives, photographs, and of course, paintings, to recreate the legendary garden that Monet had brought to life.
Though Van der Kemp was separated from the artist by several generations, Vahé notes that he was well-suited to lead the restoration. Van der Kemp was a painter and gardener himself, and he was well-connected, moving in circles in Paris that were not so far removed from those that Monet had engaged with decades earlier.
Monet had bought the farmhouse and its land in 1883, stumbling upon it while on a walk, and later permanently traded the avenues of Paris for the rolling hills of Normandy. After fitting the house to his needs—painting its walls in hues of blue and yellow, setting up a studio, and hanging it with his collection of Japanese prints—he turned to the gardens.
He cleared the land of trees, tilled the soil, and enlisted expert gardeners to help him make the most of the Normandy landscape, while introducing plants from as far away as Japan. He initially adopted the French gardening tastes of his day, though drawing from his artistic instincts, he would eventually develop a style all his own, carefully plotting out a geometric patchwork of flowerbeds, installing arches that would be enveloped in flora, and engineering moments of light and color that would occur throughout. 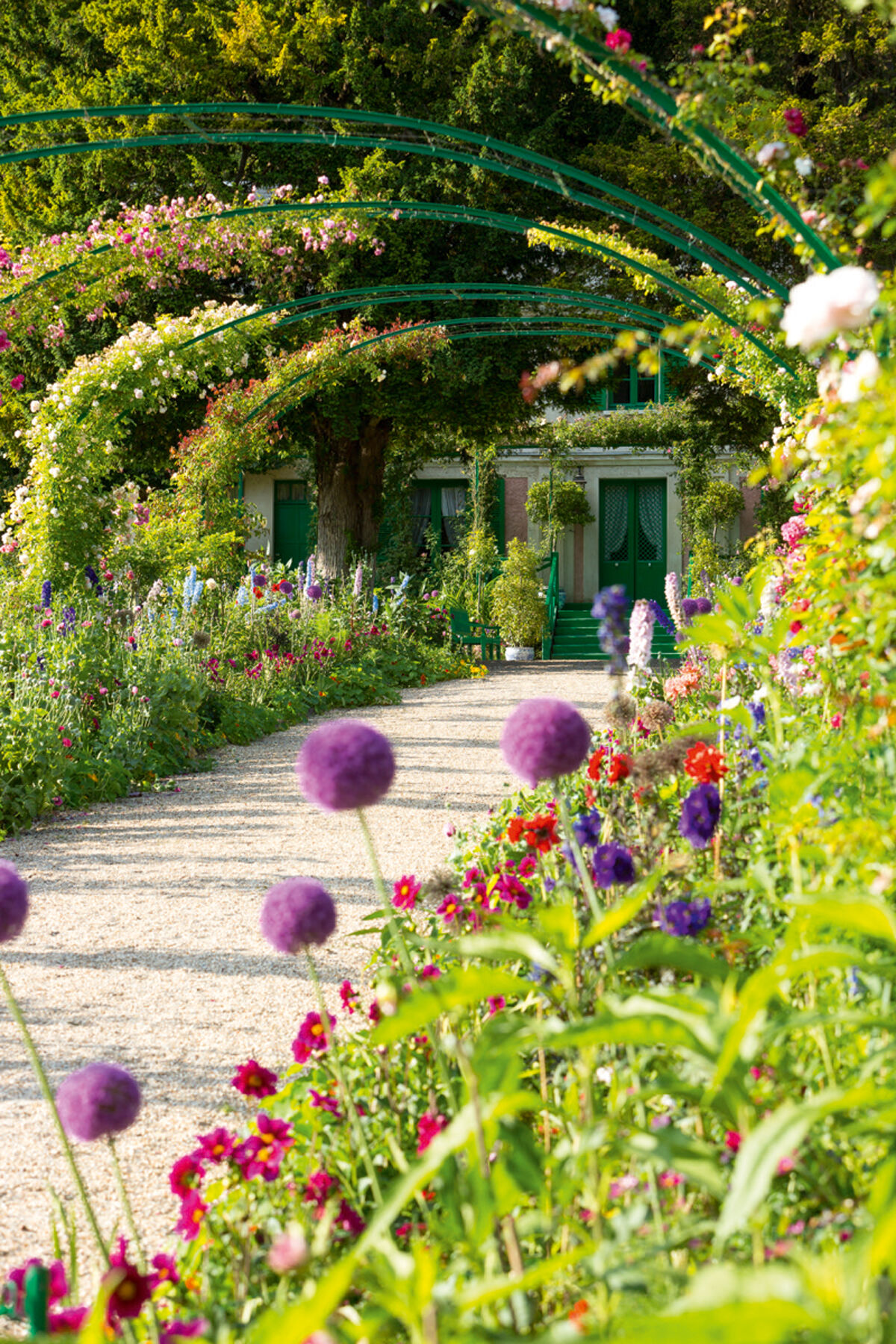 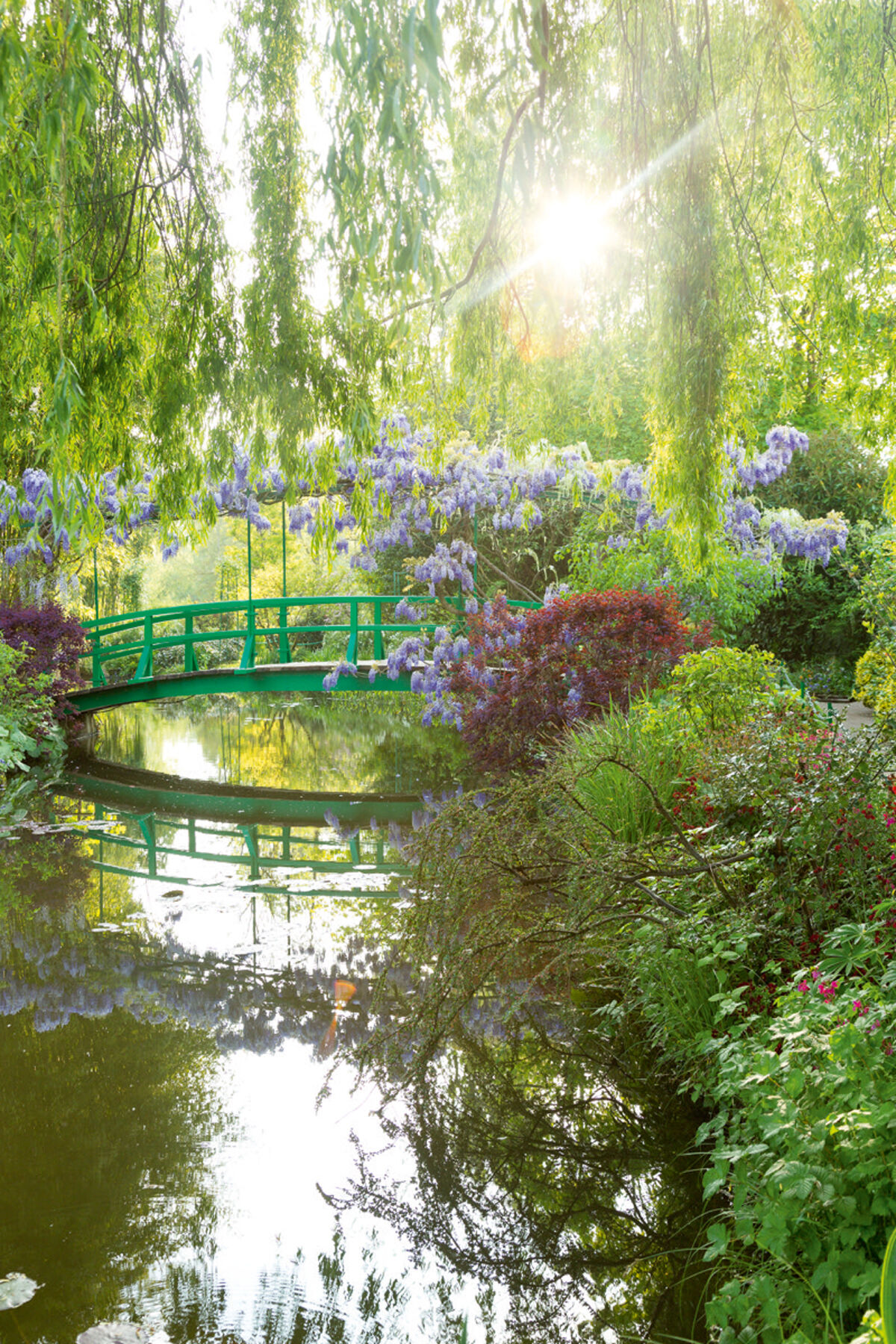 Vahé notes that, when it came to the gardens, Monet was driven by desire and instinct. He’d once decided on the spur of the moment that he wanted chrysanthemums, and wrote a letter to friend and fellow painter
Gustave Caillebotte
to find out where he could get them.
Monet prided himself on the garden, acknowledging it as his own creation, but also as his open-air studio, where he planted himself for hours on end to paint, weather permitting. In the Japanese water garden, which he developed later, he installed a large studio.
Though the time Monet spent at Giverny is often associated with the artist’s darker works and periods of personal turmoil, particularly around World War I, the gardens are said to have instilled in the artist a sense of joy, as well as the motivation to create the works that would later be credited with pushing Western painting towards abstraction.
And Vahé works tirelessly to realize for visitors to Giverny the vision of the gardens they’re expecting from those paintings—the vibrant, flowery oasis or the serene waterlily sanctuary that they fell in love with at a museum, through an art history book, or on a poster.
He works with a team of 10 full-time gardeners, as well as volunteers, from worldly horticulturists to teenage French apprentices. While the gardeners typically work from 7 a.m. to noon and 1:30 to 4:30 p.m., with a long lunch in between, Vahé notes that his days often begin before then and last until 8 p.m. No day is typical; his hours might be filled with watering plants, ordering seeds or bulbs for future seasons in his office across the road (the seeds are primarily sourced from Japan and the U.S.), visiting a supplier in Vernon, tending to plant production in greenhouses, or guiding film crews through the gardens.
The plants we see today are not exactly the ones that Monet painted a century ago, and they’re not all placed where they were when the artist lived, but Vahé believes that’s not what’s important. Rather, he works to maintain the original aesthetic—a certain profile of color and light—that corresponds to Monet’s vision.
Central to this approach is putting light-colored flowers—whites and yellows—in every area of the shade; and placing dark colors in juxtaposition to paler colors. It’s also crucial to create a density of vegetation along the garden’s central path, and to develop moments where the viewer is fully immersed in plants, so that the sky is barely visible.
In some cases, though, a faithfulness to Monet’s original garden is maintained precisely, as in the beds of enormous crimson red geraniums just in front of the house. Those beds, which are central to foot traffic, need to be uprooted and filled with new soil every 10 to 15 years. Other plants, however—like a type of Japanese anemone that Monet kept—they’ve found they cannot cultivate today. 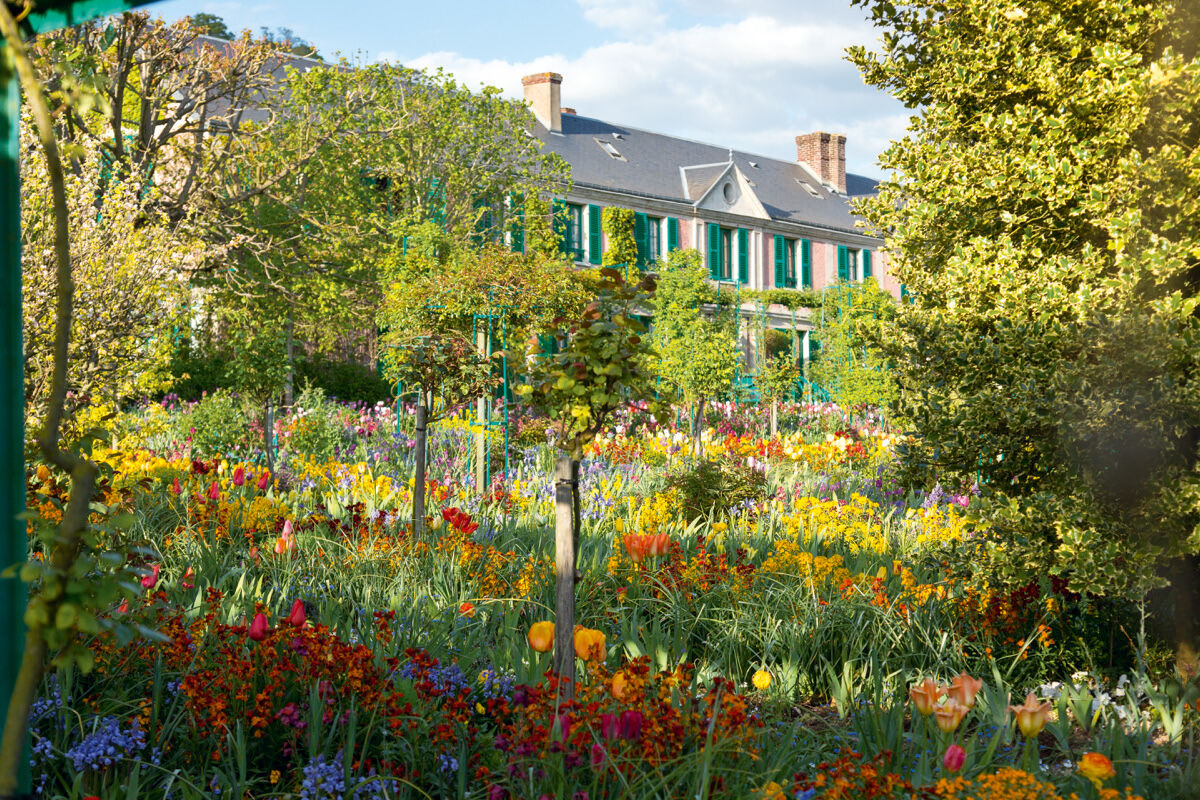 Vahé stresses that man cannot control nature, but rather must adapt to it. “La nature n’est pas rigide,” he says. Despite this, it’s clear that Vahé and his team have a way with nature. Scan the grounds and you’ll notice the way plants are just the right height and impossibly rich in color, and yet they retain an aesthetic that’s not at all pruned or manicured like the gardens you’d find in Versailles. Instead, they feel abundant and relatively wild.
Observing the evolution of the plants has always been central to Vahé’s love for his job. He intended to learn to paint during his six-year retirement (inevitably inspired by his time spent working in the shadow of Monet), but every time he found a teacher or a class, circumstances cropped up that disrupted his lessons. Most recently, when he began painting at a school in Vernon, the director of Fondation Monet called him, asking him to return to his post as head gardener. He didn’t miss the post at Giverny, he says, because all the while he was tending to his own garden, a stone’s throw away.
If Vahé were a millionaire, he says, he would be spending his money on the gardens, and doing the same thing he does now. When I tell him that I believe his job is essential to preserving Monet’s legacy, he agrees, though quickly adds that it’s a charge he now shares with his team. When the team has high morale, he adds, you can see it in the garden, you can feel their positive spirits.
Will his team be ready when Vahé does finally retire and pass the baton? “J’espere” (“I hope so”), he says with a laugh.
At the moment, he shows no signs of slowing. His favorite time of day in the garden occurs just after sunrise, when it’s barely light. The first light that comes up is blue, and it lasts just five minutes, he says, then turns pink, red, and yellow. It was during those early hours that Monet, too, would rise and begin painting.
He notes that in the early days, during restoration, he preferred autumns in the gardens, but now he finds that it’s spring he enjoys the most. Why has his preference changed? He’s just a simple human being, he suggests, and one always wants what they don’t have. When you’re young you want to be old, he adds, and when you’re old, you want to be young.
Casey Lesser is Artsy’s Lead Editor, Contemporary Art and Creativity.
Related Stories