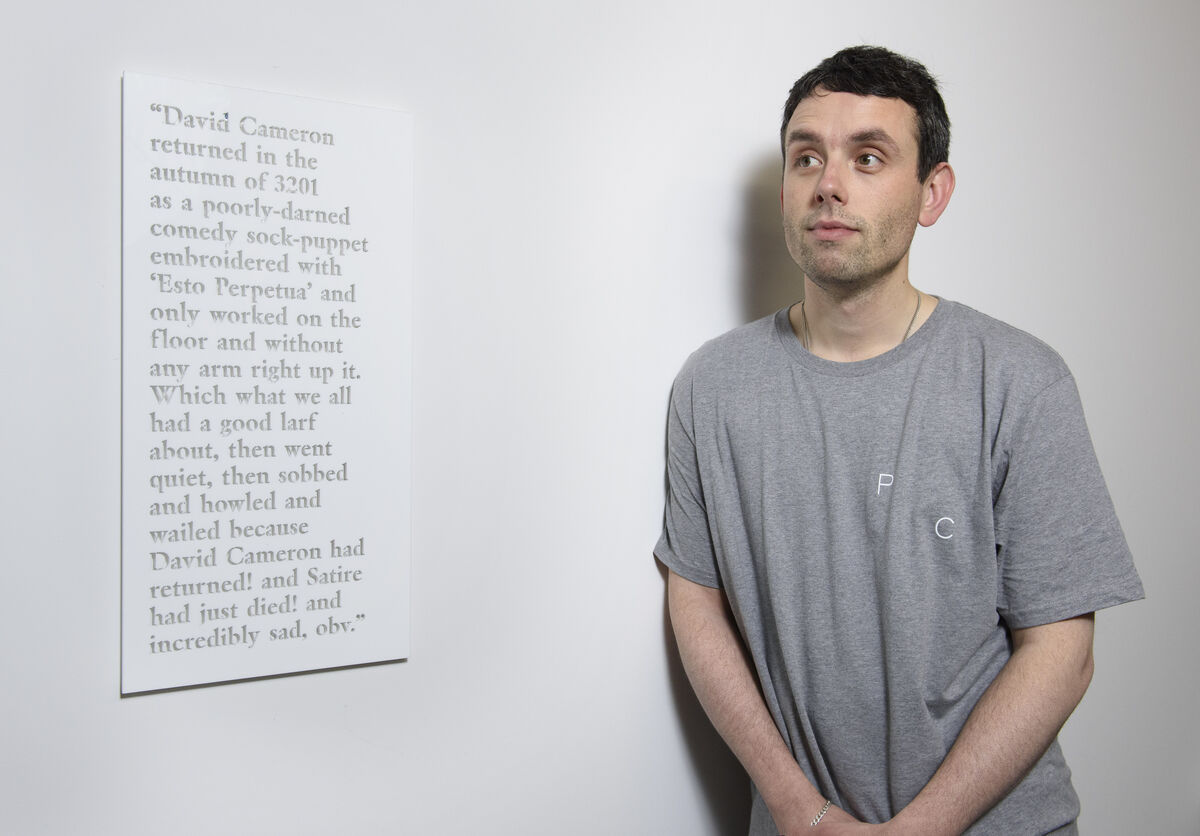 In its inaugural year, legendary British rock band Blur’s Damon Albarn collaborated with graphic artist Jamie Hewlett and Chinese actor and director Chen Shi-Zheng to stage an opera based on a 16th-century Chinese novel; in 2009, Steve Reich played with
Kraftwerk
and cult British documentary maker Adam Curtis worked with the immersive theater company Punchdrunk. This year, the events program is anchored by free-to-visit exhibitions at the Manchester Art Gallery and the recently refurbished Whitworth. The emphasis here, too, is on performative works that develop over the course of the festival rather than static displays. 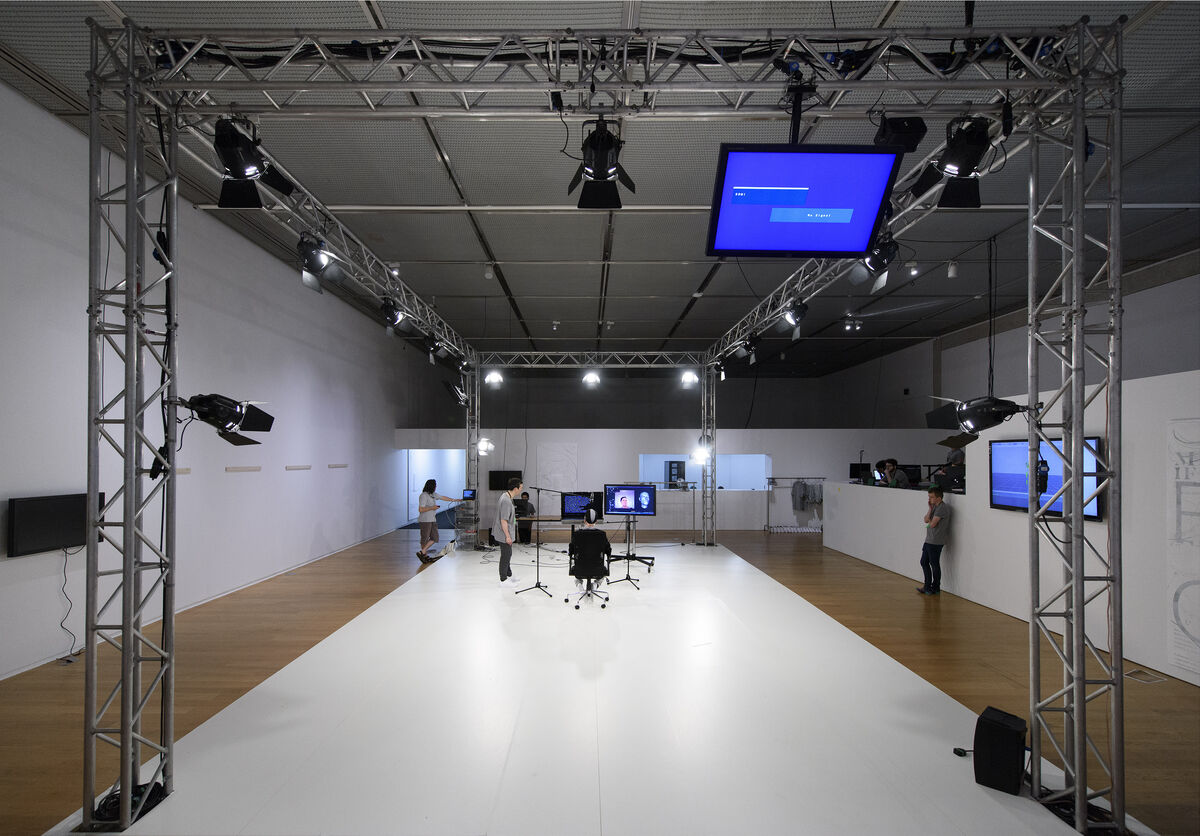 I am reminded of that fact when politely prompted to turn off my phone on approaching
Ed Atkins
’s Performance Capture at Manchester Art Gallery. The endless chattering of people on their mobiles now seems to be an accepted hazard in exhibition spaces, so this directive conjures the more reverent sense of entering a theatre, music studio, or film lot. That feeling is reinforced by the large white-walled room I walk into, the center of which is occupied by a raised stage and elaborate light rig. Onstage are two standing microphones, a monitor, a teleprompter, and a long white desk that props up another monitor and a mixing desk. In a distant, sunken corner of the room is a rostrum on which—behind monitors—sit two technicians, while the far wall is devoted to an open window of the same dimensions as the one that divides a singer from her producer in a recording studio. Around the room’s perimeter hang large, lightly expressionistic paintings of hands, arms, and heads, on small white plaques beside which are etched short, confessional-seeming outbursts of prose. Advertisement
A ponytailed man steps onto the stage and pulls on a long-sleeved black vest and black gloves. Positioning his feet bestride a floor marking, he swings his arms and sees the twin arcs reflected in the actions of a slim, green, angular avatar of a monitor on the wall in front of him. Through the window, I see the artist himself, with whom I exchange a coy wave. In an adjacent room, the actor’s movements, gestures, and speech are recorded and digitally rendered by technicians behind a serried rank of monitors. I feel as if I’m intruding.
In a final, blacked-out area is projected the as-yet-unfinished film that the previous rooms have been devoted to making, a discomforting portrait of a split-personality digital avatar presented against a clean white background. Reduced to a bald head and bare forearms, he recites a long, sharp-edged prose poem of which the aforementioned wall texts are snatches. At regular intervals his demeanor, voice, and gestural idiosyncrasies are replaced in toto: one minute speaking in a woman’s voice, hands pressed tightly to his side; the next in the stuttering tones of a child, his arms describing wild, excitable gestures. Filtered through numerous personalities, the work recalls the fractures of modernist poetry more than any other work of visual art, and specifically Fiona Shaw’s extraordinary, ventriloquizing performances of T.S. Eliot’s “The Waste Land” (the working title for which was He Do the Police in Different Voices). 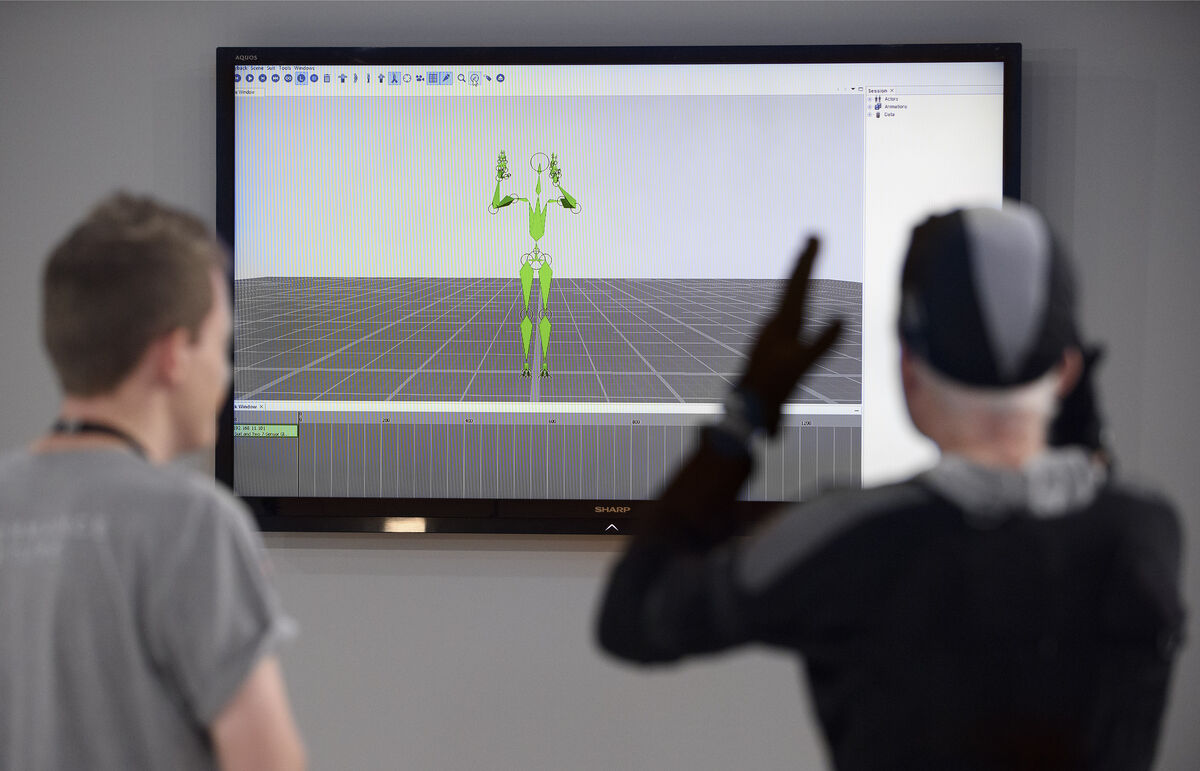 Performance Capture is an aggregative work in the sense that it compiles the contributions of 200 of the men, women, and children participating in the Manchester International Festival, each of whom—through the titular process—becomes part of the fractured personality embodied in this avatar. It’s a beautiful, deeply fascinating study in what it means to act yourself into an identity, what it means to have a body, and how to reconcile the two. Being granted access to the methods by which that personality is fabricated serves to remind us of the artificiality of our own patched up sense of self. A 30-minute walk away is the elegantly proportioned Whitworth Museum, which hosts another of the unusual artistic collaborations that have become the festival’s trademark. Across three walls of a high-ceiling exhibition room hang four new diptychs by
Gerhard Richter
, each of them a grey monochrome realized in two panes of polished glass. Darkly reflective, they initially bring to my mind a tinted window’s cold disdain for the viewer, yet on closer inspection seem to gather the ambient light rather than scatter it back into the room—what appeared to be blank grey reveals itself as two distinct tones that admit shades between them.
Trying honestly to ascertain whether the works are subtle or merely bland, I am surrounded by what I assume to be visitors on a tour of the gallery. Suddenly song breaks out and I, disorientated, realize that these unprepossessing men and women are the architects of this sound, a new composition by the revered Estonian composer Arvo Pärt. The music—devotional, choral, repetitive, and speckled with hallelujahs—elevates the paintings to suddenly seem to comprise a singular whole with the aspirational hopefulness of the sound. 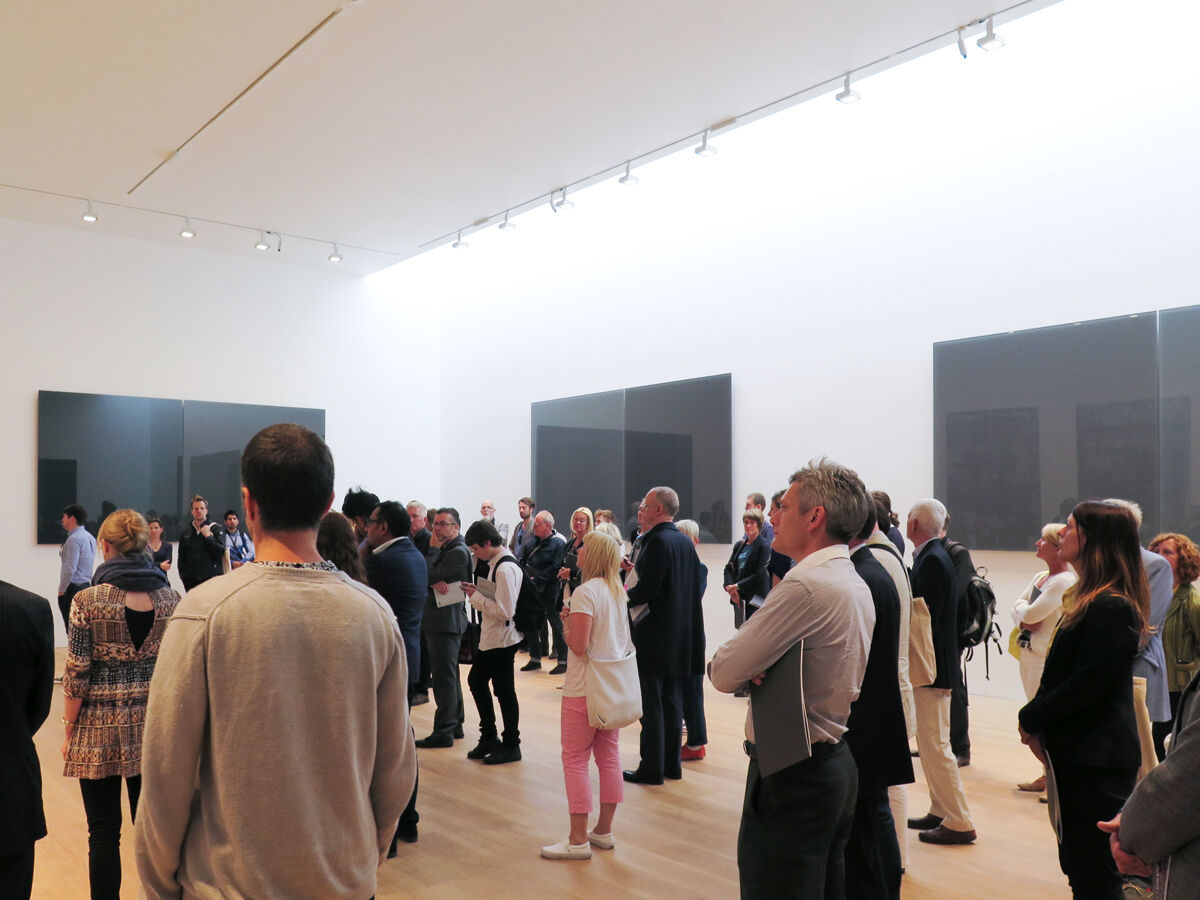 On concluding their recitation of Drei Hirtenkinder aus Fátima, I talk to a member of the King Edward Music Society of Macclesfield, the local choir performing that day. The charming Sandra tells me that—while Pärt’s austere, sacral composition is outside the normal repertoire of this amateur community choir—the experience has been a pleasure and, as much as the singing, she’s enjoyed the opportunity to meet new people. I ask her opinion of the Richter works and she tells me that they are “marvelous—you see something new every time.” Her testimony tips the balance of my opinion; I defer to Sandra.
On the day of my visit, Scottish artist
Douglas Gordon
adorns the front page of the local paper—albeit because he had on the previous night embedded an axe in the wall of HOME, the venue in which his new theatrical work was being performed (he then drew, and signed, a claw around the cut). I went down to the theater to see the artist’s spontaneous architectural intervention, and in doing so, discovered a couple of curious local kids on the same pilgrimage. In its combination of anti-establishment sentiment and popular appeal, the gesture struck me as a perversely fitting symbol for the enduringly radical, engaging, and wide-reaching festival of which it is a part.
Ben Eastham
The Manchester International Festival is on view throughout Manchester, Jul. 2–19, 2015.
Related Stories