Marc Chagall’s Jewish Identity Was Crucial to His Best Work 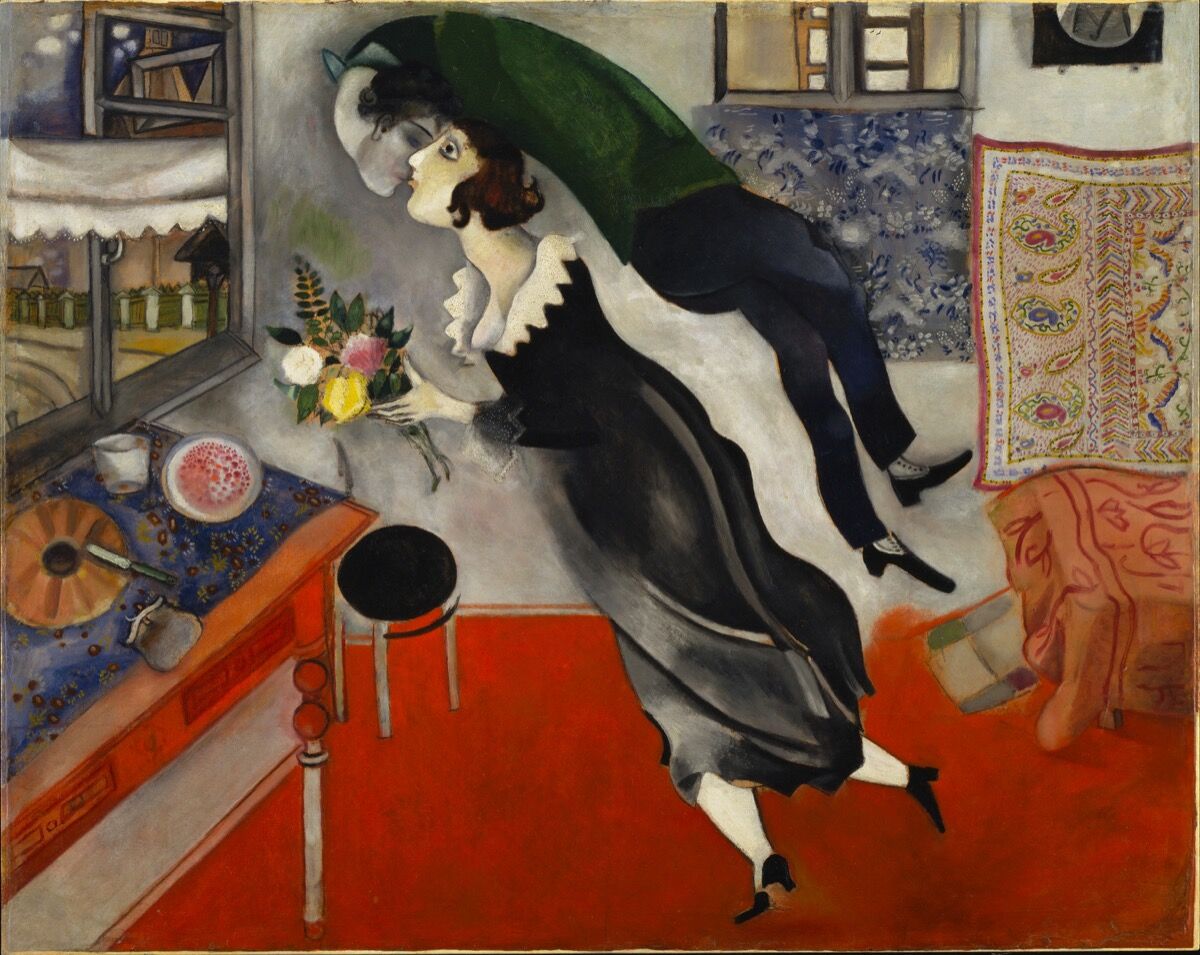 For some, the modernist master
Marc Chagall
may epitomize kitsch, dreamy atmospherics: all those anthropomorphic lovers, improbable skies, and airborne musicians. If you know your schlock, too, you’ll also be familiar with how Richard Curtis made Chagall into a bargaining chip between his two leads in the 1999 romantic comedy Notting Hill. “Happiness isn’t happiness,” says Julia Roberts to Hugh Grant, “without a violin-playing goat.” He’s a charming but unglamorous Brit; she’s a Hollywood star: They’re united by their appreciation of a print of Chagall’s La Mariée, which features just such a musical animal. Towards the end of the movie, she will give him the 1950 original, whether he wants to pursue a life with her or not.
But though Chagall’s work is undoubtedly about the play of imagination, desire, and love, the motifs that make his visual language so distinctive have their origins in something much more earthbound and richly complex. Followed right back to the source, these motifs also tell a version of the 20th century’s darkest story, and document a way of life that was destroyed. “If I were not a Jew…I wouldn’t have been an artist,” Chagall wrote in a 1922 issue of the Yiddish literary magazine Shtrom. “I would be a different artist all together.”
The son of an Orthodox Jewish laborer and shopkeeper, Chagall was born in an unforgiving part of Russia then called the Pale of Settlement—a land now distributed between countries including Ukraine, Poland, and Lithuania. Catherine the Great had sent most of her empire’s Jews here in the 1790s. Vitebsk, Chagall’s beloved home city, is now part of present-day Belarus. Being Jewish meant his parents had to bribe officials in order for him to go to a nearby school, and later, once again, to study art in St. Petersburg in 1907. It was in that city where Chagall saw
Paul Gauguin
’s work in reproduction. His favorites, though, were The State Hermitage Museum’s 1654
Rembrandts
: Portrait of an Old Man in Red and Portrait of an Old Jew. 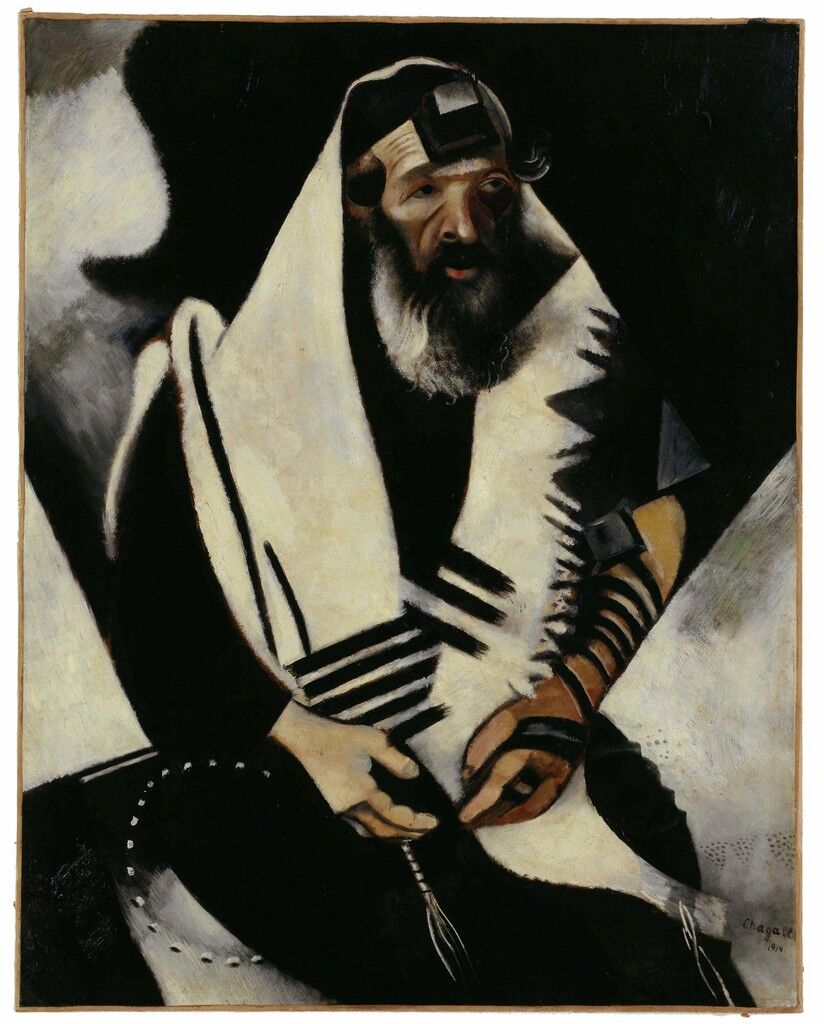 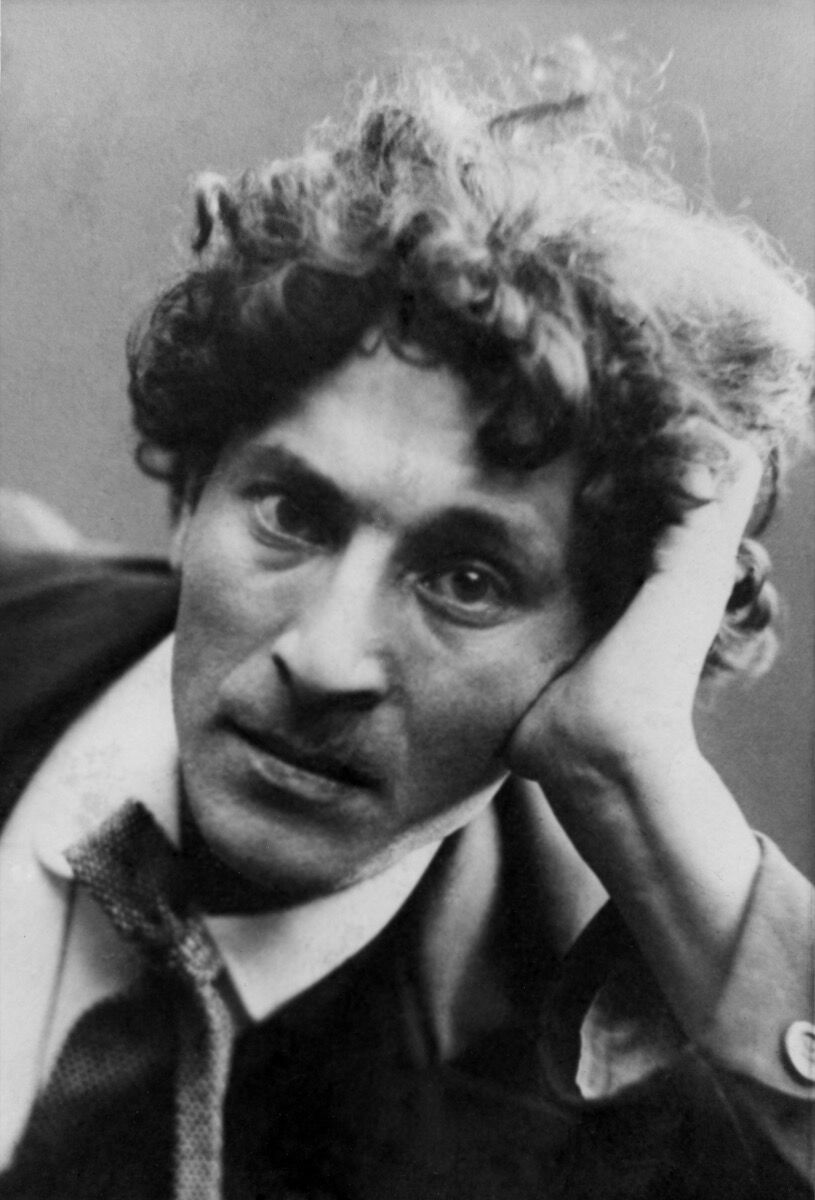 In 1908, Chagall returned to Vitebsk, dejected and unsuccessful. He painted The Dead Man that year, which introduced motifs and elements of style that would persist throughout his career: a violin player; a strange use of perspective, with uniquely sized figures; wooden huts; a melancholy humor that can easily tip into bathos. The basic composition was taken from a childhood memory of a woman screaming in the street for people to help her dying husband. In Chagall’s rendition, a street sweeper carries on working around her. The murky palette makes it appear more like an
Edvard Munch
painting than what we would recognize as a Chagall; his extreme vibrancy would come later.
Gauguin’s generation had looked all over for supposedly unsullied subject matter, but Chagall found his subjects all around him. He would paint Hasidim taking snuff while they studied; animals that would wander into his garden; his granddad, a butcher; farmers taking their cattle to market. Some compositions required a bit more imagination—like a vision of his own birth, during which he’d had to be revived in a trough of cold water.
An exhibition of some of this early work, painted in Paris and Vitebsk between 1911 and 1919, is currently on view at the Guggenheim Museum Bilbao in “The Breakthrough Years,” exploring how Chagall filtered his personal subject matter through the prism of avant-garde movements. He experimented with
Cubism
, recasting some of his ideas in the mold of work by
Georges Braque
,
Pablo Picasso
, and his sometime-teacher Henri Le Fauconnier. The results? A hallucinogenic mix of man with beast, even more perspectival distortions, and airborne people that sensually uplift the viewer. 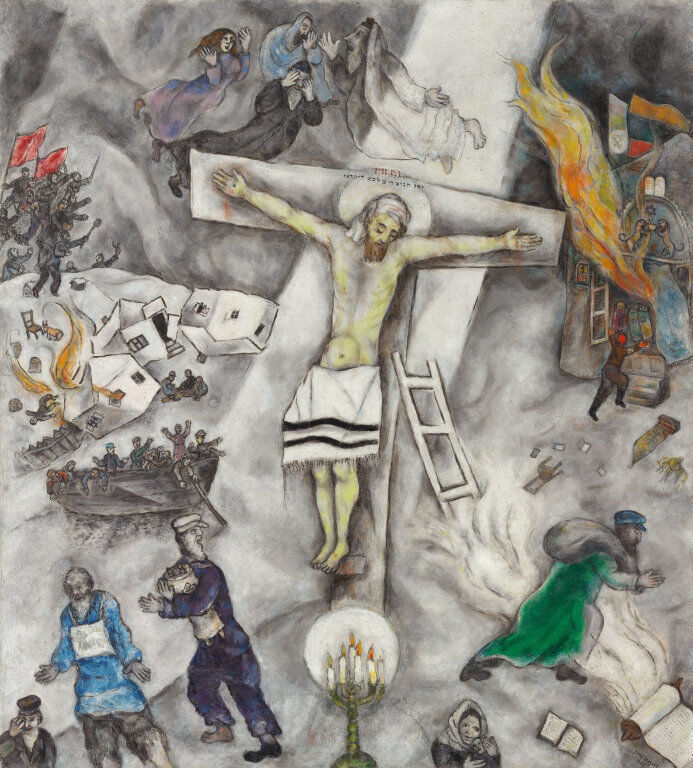 Marc Chagall
White Crucifixion, 1938
Art Institute of Chicago
Advertisement
In contrast to Westerners seeking “exotic” subjects, Chagall could paint from his own life, with genuine warmth. The 1913 painting Jew at Prayer demonstrates a tremendous softness of tone. Bent over a religious text, the figure seems to physically envelope the writ of God, his neck becoming elastic so as to better reach the metaphysics of his thought. Just as Chagall’s lovers are literally drawn out by their love—elongated by longing, like the woman whose profile wraps around the bull in Dedicated to my Fiancée (1911), or the heads of Chagall and his wife Bella in his famous The Birthday (1915), in which each head twists to meet the other—so this religious man is drawn to God.
His scenes of shtetls show parallel existences: one of everyday reality, and one of the artist projecting himself outside of and beyond it. As well as making art out of his Jewish roots, Chagall made art for his Jewish roots. In a culture that was wary of graven images, it was a form of fanciful documentary. (It is lucky he did it when he could—what he was depicting would disappear in his lifetime. In 1944, when Vitebsk was liberated from the Nazis, the population of 170,000 had been almost completely wiped out.)
Chagall spent his time at home wanting to be gone, and his time abroad longing for home. He finally got his wish to move to Paris in 1910, where, after a couple of years of struggling, he was accepted by the likes of writer, critic, and tastemaker Guillaume Apollinaire, and the glamorous power couple
Robert
and
Sonia Delaunay
.
In May 1914, preparing for a show in Berlin, Chagall locked up his Paris studio. After Berlin, he hoped to travel to Russia to see his sister married and be reunited with his own fiancée. But just as the tide was turning for him, he was stranded by the end of World War I. A week after he got home, Austro-Hungarian archduke Franz Ferdinand was killed, triggering the conflict, keeping Chagall in Russia for nine years. He would see Jews living hundred of miles outside of Vitebsk expelled from their lands; an antisemitic ruling by the army claimed they were spies, citing the similarity of Yiddish to German. Chagall would invite these displaced Russians into his home and paint them; he depicted one airborne in Over Vitebsk (1914). 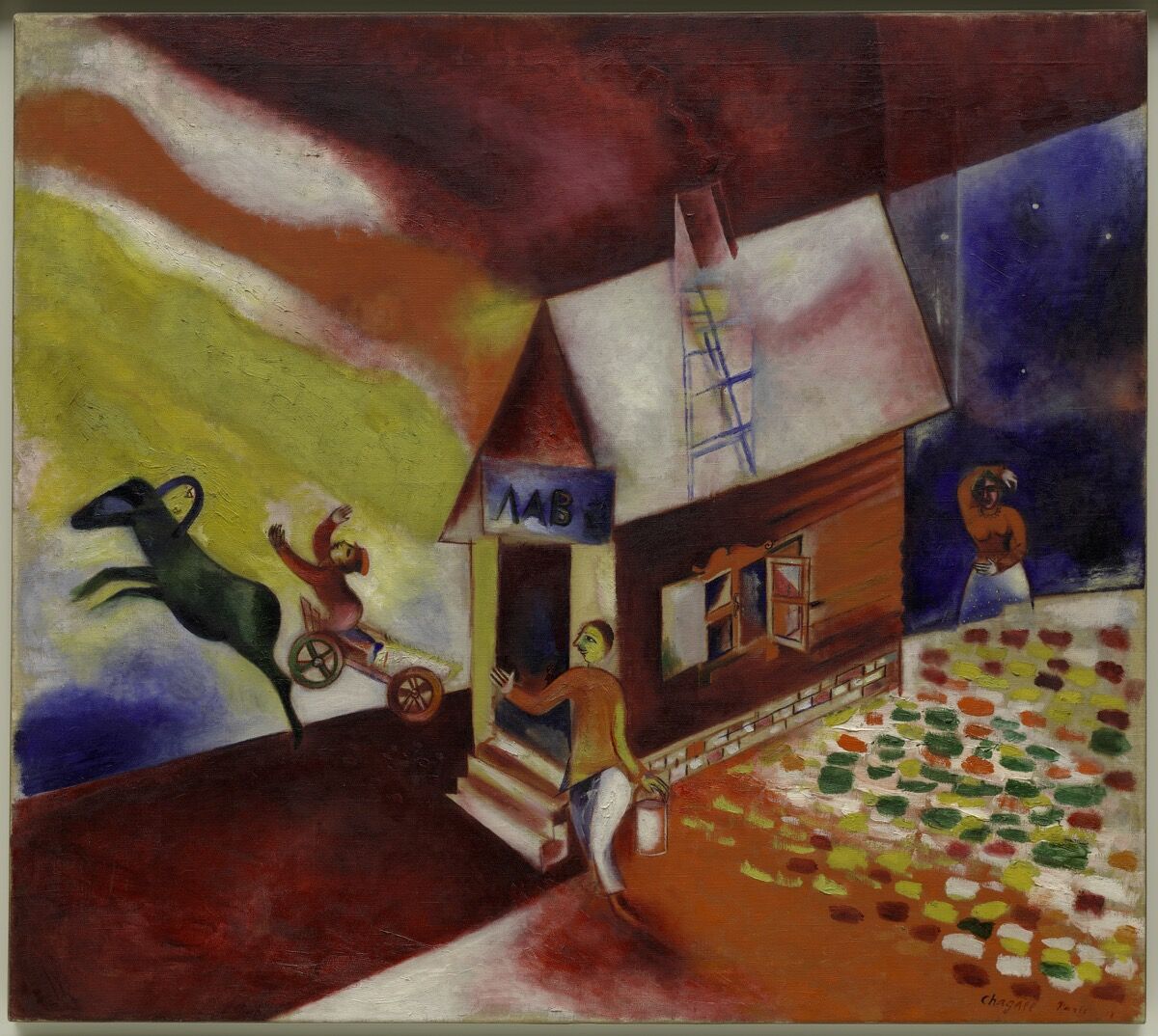 In his book Marc Chagall, writer Jonathan Wilson suggests that the recurring flying figures themselves are a pun on Chagall’s Jewish identity, and come from the literalization of a Yiddish word: “The word luftmensch, which denotes in Yiddish an individual overly involved in intellectual pursuits, literally means ‘man of the air,’” writes Wilson. Chagall, ever the dreamer, wishing he was in a cosmopolitan center when at home, then longing to return after he had broken free—perhaps he himself was the luftmensch he depicted. But like his animals and violinists, this symbol was unmoored from any sort of strict logic. It seems Chagall employed his motifs when and where they felt right.
With the rise of fascism in Europe, Chagall’s motifs—if they didn’t take on a coherent, symbolic logic—at least acquired a new tone of voice. In 1933’s deeply melancholy Solitude, we see a man, covered in a tallit and deep in troubled thought, turning his back on a violin-playing heifer. His town, meanwhile, burns in the background. Or consider White Crucifixion, painted following the Kristallnacht in 1938, the night in which Nazi politician Joseph Goebbels sanctioned a pogrom. The canvas shows European Jews subject to violence, their homes and synagogues burnt, while Christ—his Jewishness emphasized by his wearing a prayer shawl instead of a plain loincloth, and with a crown of thrones conspicuously absent—dies in the center. Chagall overpainted insignia he originally included to mark the dark history being made around him: Nazi armbands and placards around the necks of Jews. In trying to keep it timeless, he has made it too unspecific, even too subtle.
At 53, Chagall alighted in New York, having fled Europe in 1941. He painted more Christ figures, explicitly identifying with Christ’s suffering himself. In 1947, he also rather ponderously compared the suffering of all European Jews with that of Christ. Hannah Arendt would later discuss the enormity of the Holocaust in terms of “the banality of evil,” the idea that such senseless horror could be carried out like an administrative task. The tragedy seemed to have rung from Chagall—that most autonomously imaginative of painters—a colorlessness of thought; a triteness. He would continue to produce lovely work, some of it startlingly original, full of all the brilliant old symbolism and color. But the Vitebsk he knew, now no longer in existence, wouldn’t be as vivid for him.
Still, it’s energizing to look back to some of the painter’s earliest work, when his engagement with Jewish identity helped produce some of the most enduring and ubiquitous images in modern art. Indeed, despite its radicalness, Chagall’s work is perhaps the most immediately accessible of any modernist. My own first vivid schoolroom experience of visual art was of a Chagall, though I can’t recall which work it was. It could have been any of them, really: goats, violins, flying figures. The point was, Chagall’s was already then a very distinctive and familiar visual language. Why is this? Maybe because it is because in these paintings he was constantly returning to the images—the goats, the violins, the homes—of his own childhood.
Jonathan McAloon
Related Stories

From Chagall to Koons, 7 Artists Who Designed Costumes 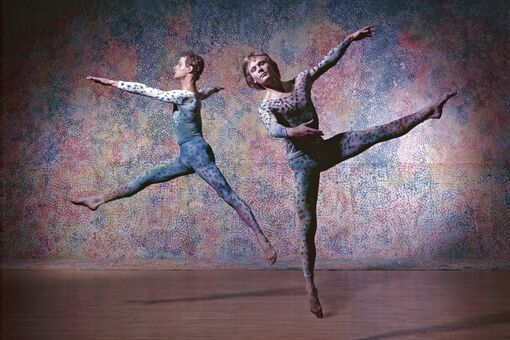