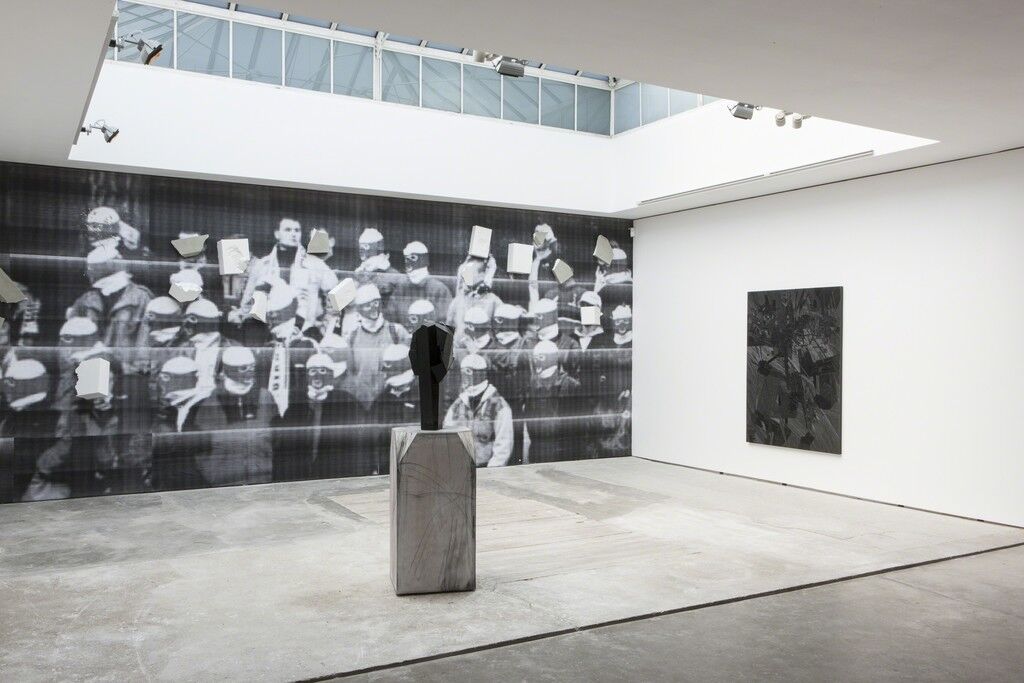 Though artist
Marcin Dudek
left his native Poland at the age of 21, the country continues to inform his work. In his second solo exhibition at London’s Edel Assanti gallery, titled “we stumbled as we clambered,” he presents installations, sculptures, photography, and mixed-media compositions focused on the intertwined themes of violence, politics—and football (or, for the Americans out there, soccer).
The exhibition turns on an old snapshot. In it, Dudek and his friends and fellow members of the Cracovia football fan club pose energetically. They are primed not only for the competition among the teams but also among the fans themselves, whose expressions of passion for their side would often turn violent. Such violence, and its chilling resemblance to the political violence of Soviet-era Poland, informs the work in this exhibition.
“I was never particularly fanatic about a flying piece of leather, but I do like the atmosphere of a football game and I tend to consider hooliganism as a vital form of independent movement,” Dudek once explained about his focus on football. “During the ’90s, there was an explosion of football fan subculture in Poland, with an active club in every city. Krakow, where I come from, is particularly active on that front and the presence of two major football teams electrifies the divided town. On the day of the Derby you can smell the adrenaline in the air.”
The artist effectively demonstrates the overlap between sports and politics in Poland through an installation that dominates the gallery space. Papering one wall is a greatly enlarged, low-quality black-and-white photograph, capturing the members of his football club moments before a fight. Their faces are obscured by balaclavas, as well as by abstract, sculptural fragments that he has placed over the heads of some of the club members. In this way, he redacts them from this photographic record, much as the Soviet government scratched out the faces of dissidents from family photo albums during political purges. But rather than aiming to eradicate their existence through such erasures, Dudek wants to remember them by bearing witness.
Karen Kedmey
“we stumbled as we clambered” is on view at Edel Assanti, London, Apr. 30–Jun. 6, 2015.
Follow Edel Assanti on Artsy.
Related Stories