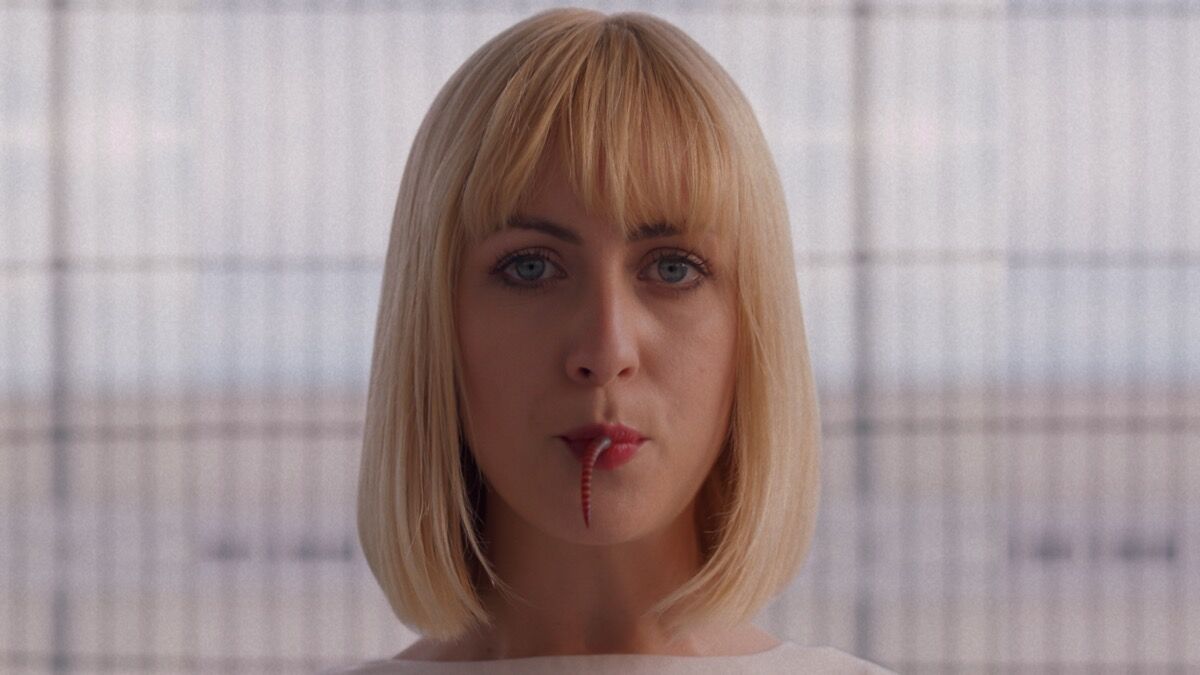 Marianna Simnett, still from Worst Gift, 2017. Courtesy of the artist.

I am sitting in the waiting room of a Chinatown radiology clinic, where a faded poster of
Salvador Dalí
’s painting The Hallucinogenic Toreador (1970) hangs on the wall. A television, its cable connection skipping and glitching, is tuned to the daytime talk show Pickler and Ben; a woman is relating her friendly run-in with country music star Keith Urban at a local Wawa. I’m here for some tests that I probably don’t need, other than to quell my own paranoia.
No one likes killing time in a doctor’s office, especially one this accidentally surreal. But it is a surprisingly fitting place to ponder the equally odd work of
Marianna Simnett
, whose films I have spent much of the week watching. Over the course of five films made between 2014 and 2017, the London-based artist has explored and subverted the aesthetics of medical institutions: latex gloves yanked taut, microscopic cameras threaded into cramped spaces, needles plunged gently into flesh. For most people, Simnett’s films can be a harrowing experience—or at least, a squeamish one. For a committed hypochondriac such as myself, they can feel like full-blown immersion therapy.
While they’re miles away in terms of tone, the artist has the closest affinity to
Mika Rottenberg
. Both spin fantastical tales around a kernel of documentary truth; both cast real people to play versions of themselves. In her video works, Rottenberg has examined the economies of both lettuce and pearl farming. Simnett has pursued a similarly wide range of obsessions, from “sworn virgins” in Albania to the ways in which cow udders can fall victim to mastitis. Her videos interweave parallel stories, confusing fact and fiction. That’s partially a reaction, she told me recently, to the fact that the world has been busy doing the same thing. 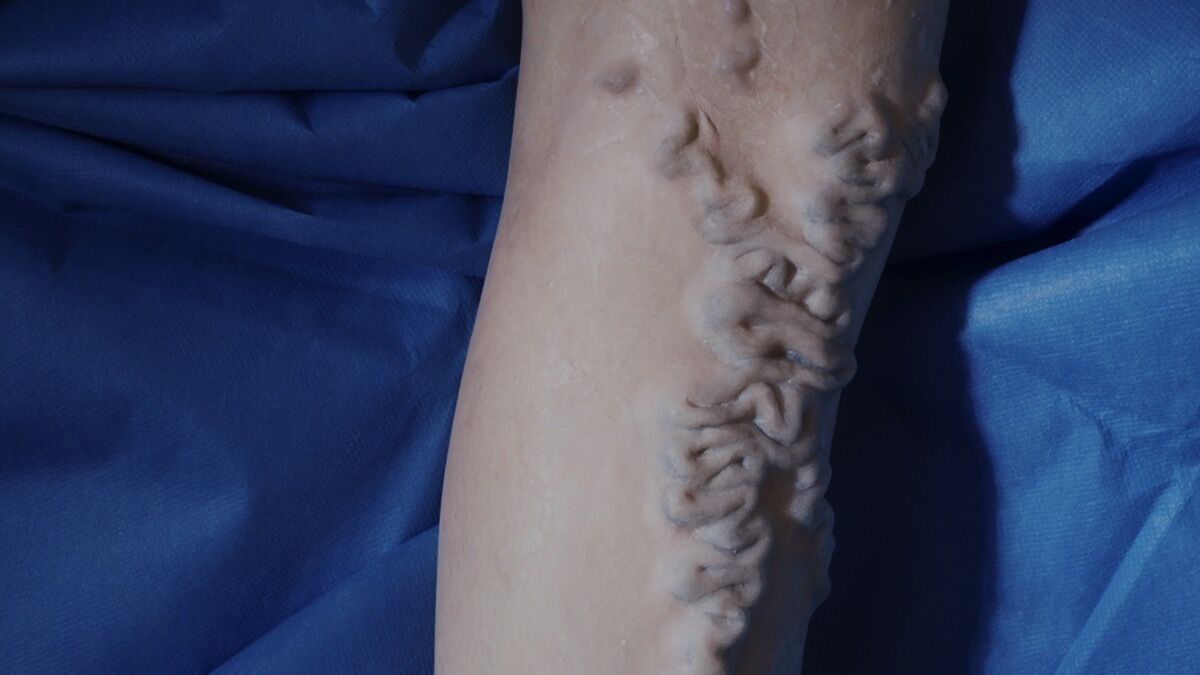 Marianna Simnett, still from Blue Roses, 2015. Courtesy of the artist.

Blue Roses (2015), for instance, toggles between a varicose vein procedure and a scientist working to perfect a remote-controlled cockroach. It includes a scene in which a blood-bloated leg explodes, and climaxes—like many of Simnett’s works—with a surprisingly moving, touchingly off-key musical number. The Udder (2014) is a sort of coming-of-age story set on a small, rural, roboticized dairy farm.
That film’s same young, non-professional lead actress resurfaces in Blood (2015), a dreamlike depiction of a nasal surgery that references both a Freudian case study and the Kanun, a 15th-century Albanian legal code still in effect in large portions of the country. (Simnett sampled some of the more evocative language of the Kanun directly, such as the expression “A woman is a sack made to endure.”) In Worst Gift (2017), a group of thuggish adolescent boys trapped in a dirty hospital are subjected to endless injections to their vocal chords at the hands of a boil-covered doctor who sings like an angel.
Elements of these films are spliced together into a new, five-channel omnibus installation, Blood In My Milk (2018)—on view at the New Museum in New York through January 6, 2019—which the artist considers its own cohesive work. 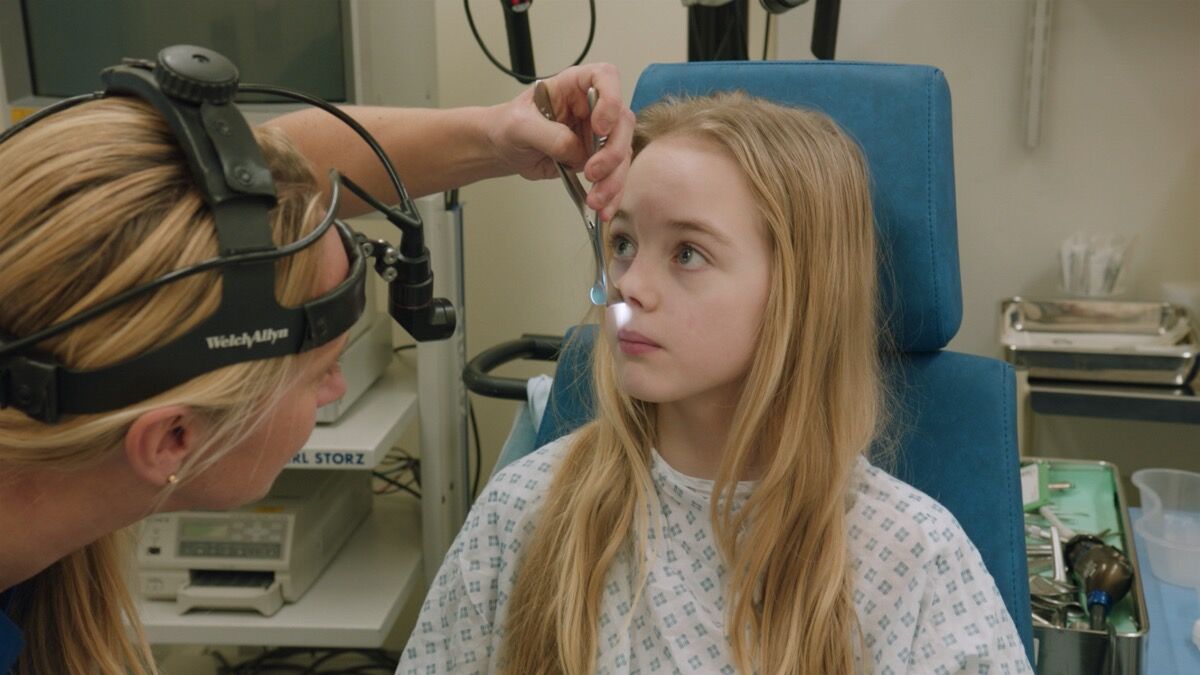 Marianna Simnett, still from Blood In My Milk, 2018. Courtesy of the artist.

Advertisement
With Simnett, it’s hard to know what to believe—what’s imaginary, what’s real, what’s real-ish. “I start learning about the nervous system of cockroaches, or voice conditions like spasmodic dysphonia or puberphonia, and that informs an almost science-fiction, invented illness that I then start to manifest,” she explained. “But it comes out of rigorous research and conversations with doctors and surgeons.”
For her 2016 work The Needle and The Larynx, Simnett personally endured Botox shots to her vocal chords, which temporarily lowered her voice’s pitch. The artist originally considered an invasive surgery that would have made the change permanent. Even the Botox treatment was a bit of a tough sell at first. Initially, the doctor she wanted to work with didn’t understand why she would want such a procedure. “Then he was like, ‘Ah…so you subject yourself to things,’” Simnett recalled.
Part of what makes the artist’s work feel so moving—at least to this permanently worried writer—is the way in which she captures the creeping anxieties of simple physical existence. Being human means being vulnerable, unprotected, precarious. Turning yourself over to a doctor’s care can be comforting: There’s a handing-over of responsibility, “submitting yourself to someone else’s control,” as Simnett put it. There is a ritual and a protocol to doctor’s visits that can be soothing, however drenched in fear. The X-ray jacket comes down, the ultrasound wand makes its tickling progress. Hopefully, your leg does not explode. 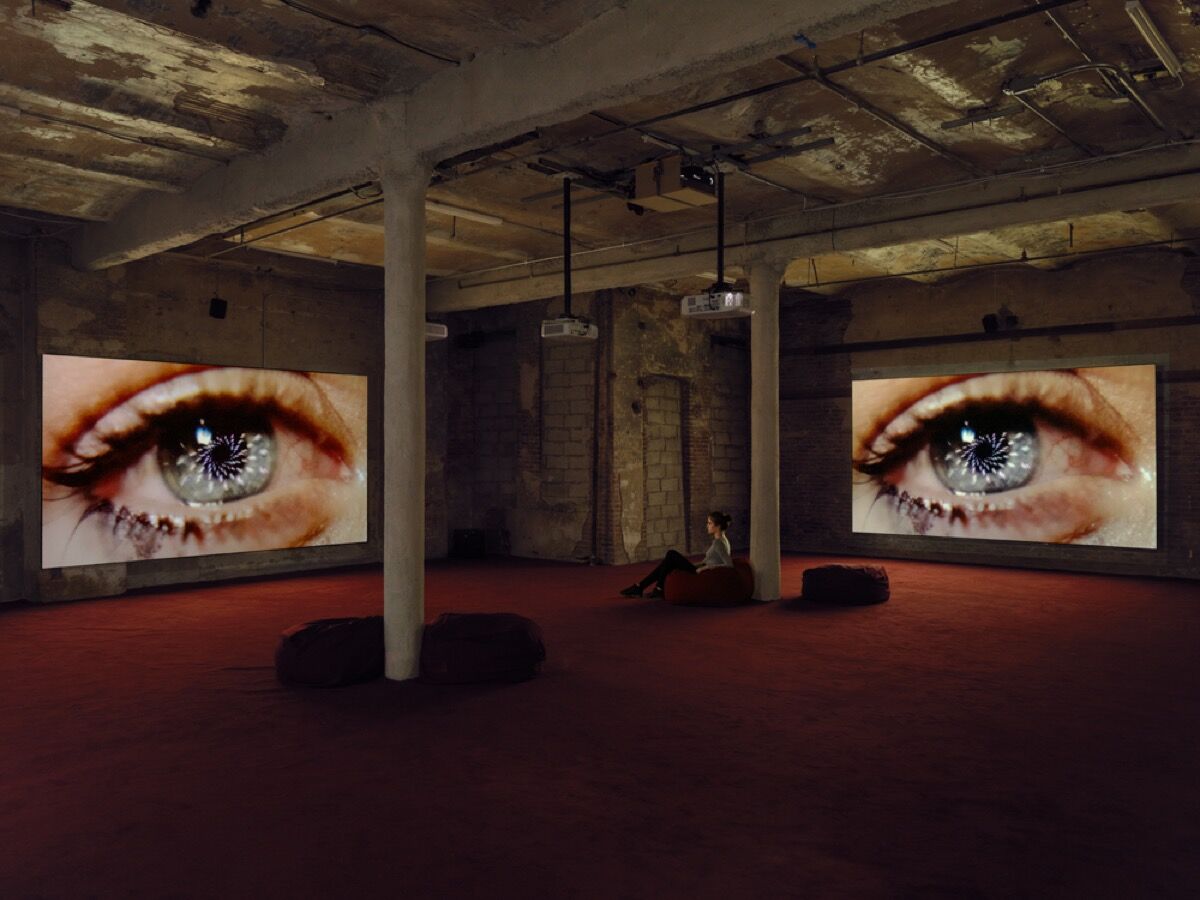 Installation view of Blood in My Milk (2018) at the New Museum. Photo by Maris Hutchinson / EPW Studio. Courtesy of the artist.

But for the artist, hospitals aren’t really her way to talk about sickness; she doesn’t stress about her own health, per se. “I do feel these forces of threat which are indescribable, and I make up a language for them in my work,” she told me. “It’s definitely a pervasive feeling that I’ve been carrying around for a long time.” That threat is palpable in the films, which can be hard to take in; viewers have apparently fainted at previous exhibitions. “The endoscopic view of the turbinate bones being removed,” she noted, referring to a scene in Blood that uses found medical footage, “yeah…people don’t like that.” (For the record, Simnett said that she’s mostly through with the medical subject matter that she’s known for: “I don’t like to have a habit; I don’t like to see patterns emerge.”)
The visceral discomfort of much of her work is intentional, but Simnett isn’t aiming for cheap thrills—she wants her viewers’ “bodies [to] feel alive,” she said. “I think it’s about trying to feel like you’re there, when a lot of people are swimming around, feeling very wafty or online or digital. It’s about trying to make people feel alert, woken up.”
For Simnett, hospitals and surgery rooms are a metaphor, a way to get at a certain kind of dread—but also a certain kind of hope. “I’m not interested in horror for the sake of horror, or shock for the sake of shock,” she explained. “I’m telling stories, and my story isn’t about butchering myself to pieces. Transformation is much more my message than amputation—transformation is through and through my work. Everyone is always becoming something other than themselves.”
Scott Indrisek
Related Stories