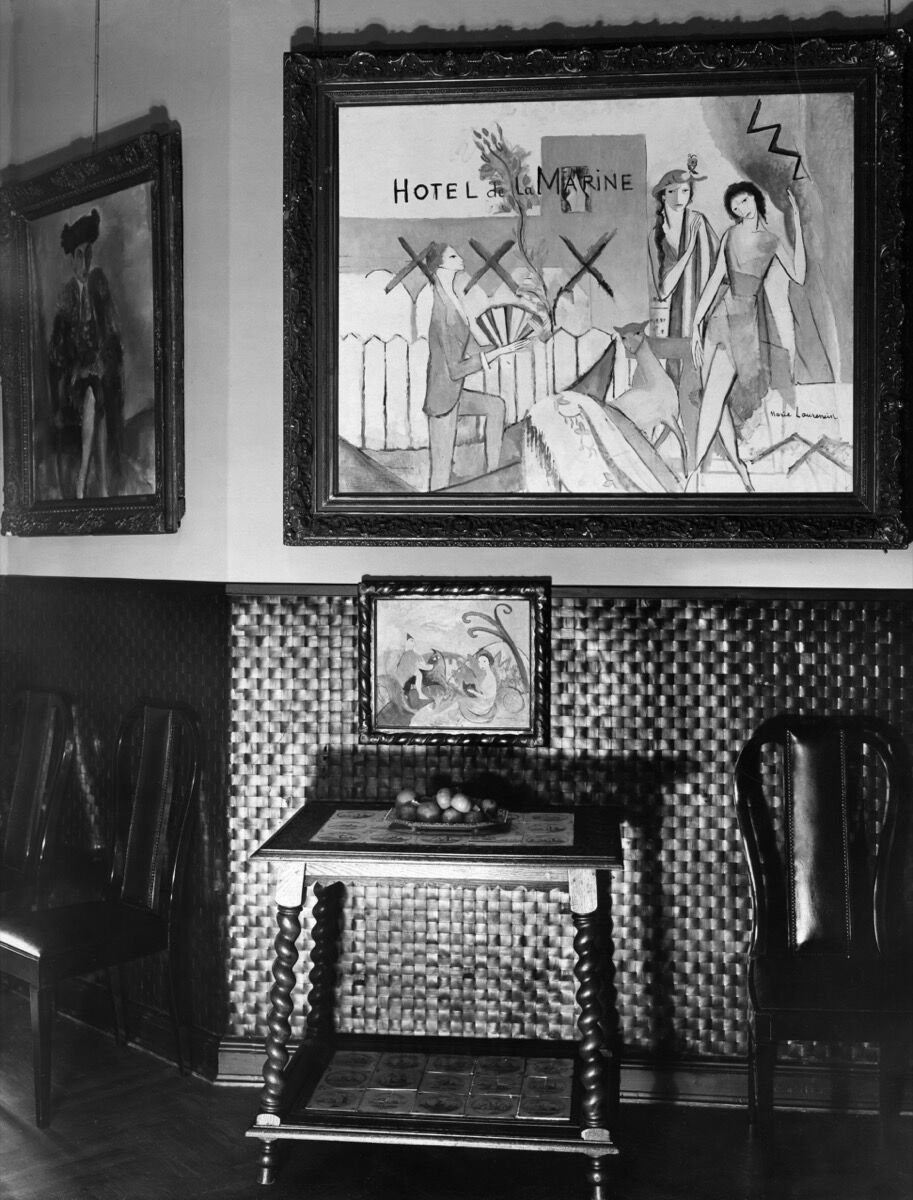 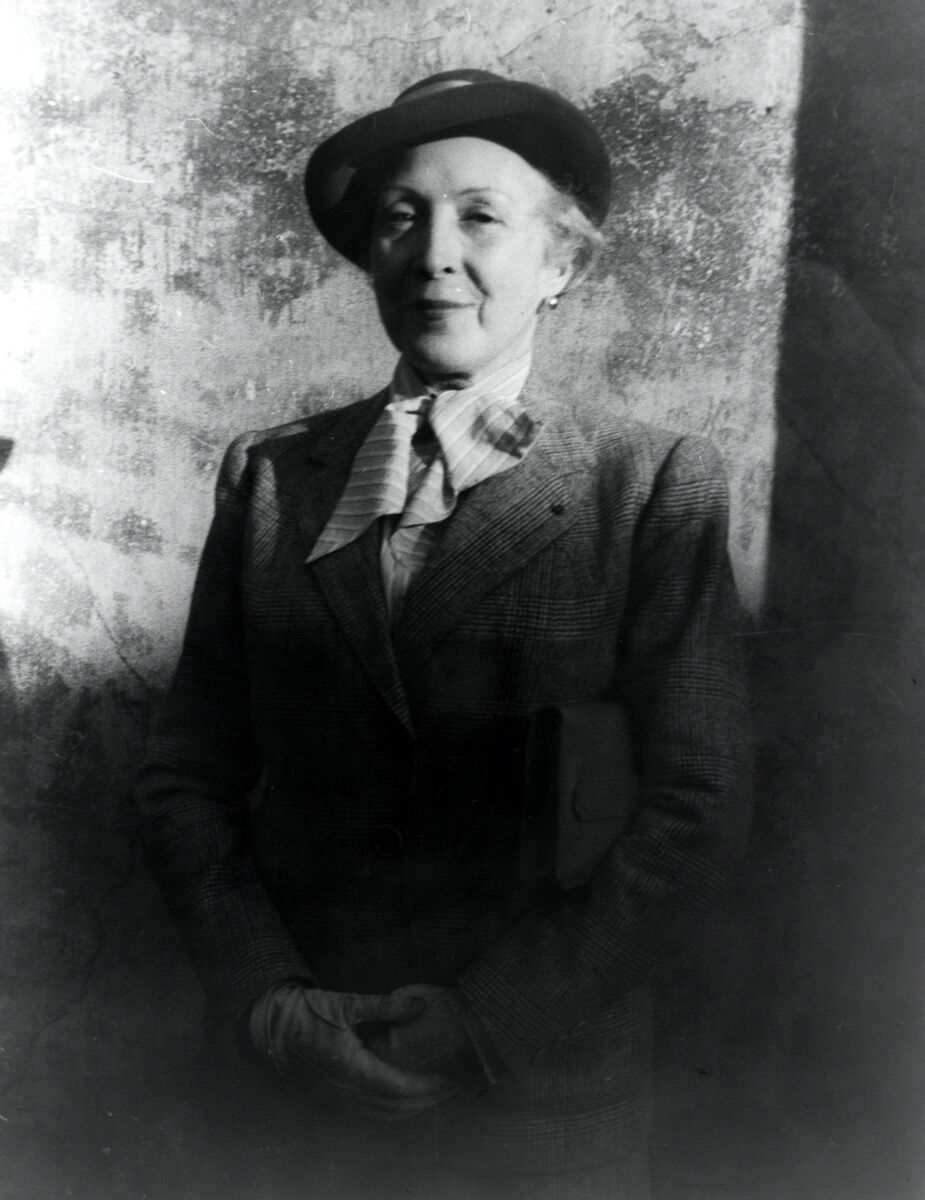 “Since…
Berthe Morisot
, no woman painter has earned the world-wide endorsement of art connoisseurs to so great an extent as
Marie Laurencin
,” declared Dorothy Todd, the editor of Vogue, in 1928. “Her pictures hang in almost every national gallery and no private collection is considered complete without one.”
Laurencin was perhaps the most celebrated woman painter of avant-garde Paris. She was colleagues with
Picasso
at a time when few women were permitted into his inner circle. Laurencin was also a society fixture, befriending and painting Coco Chanel, and regularly attending Natalie Barney’s salons. Most of her works portray a syrupy fantasy realm where girls play in perfume clouds—a queer modernist vision that riffed on Fauvism and Cubism while asserting profound independence from these movements. Yet Laurencin’s legacy is shamefully underrepresented in art history. She’s one more great woman artist who’s been left out of the popular canon.

Marie Laurencin
La réception des jeunes filles, 1932
HELENE BAILLY GALLERY
Born the illegitimate daughter of a small-town French government official in 1883, Laurencin studied porcelain painting at Paris’s Ecole de Sèvres, and then, from 1904, at the prestigious Académie Humbert. Being a woman made her worthy of ridicule at the boys’ club of the academy, but the Cubist circle, including
Georges Braque
and
Francis Picabia
, tentatively accepted her. She often clashed with Picasso, whose masculine genius and rampant heterosexuality was antithetical to her own worldview. He did, however, introduce her to her first significant romantic partner, the modernist poet Guillaume Apollinaire. Frustratingly, there has been a longer historical memory of Laurencin as Apollinaire’s muse—he even wrote a poem titled “Marie”—than as an artist in her own right. Yet her productivity outlasted the relationship by decades.
Laurencin cut ties with Apollinaire around 1912. He didn’t take the split seriously until two years later, when Laurencin married Otto van Wätjen, a German baron and painter. Thanks to her new German passport, World War I saw her exiled to Spain. There, she met Japanese poet Daigaku Horiguchi, who translated her poetry into Japanese. A few lines of her poetry are particularly illuminating with regard to her work: “Worse than being dead / even more pathetic / is being a forgotten woman.” 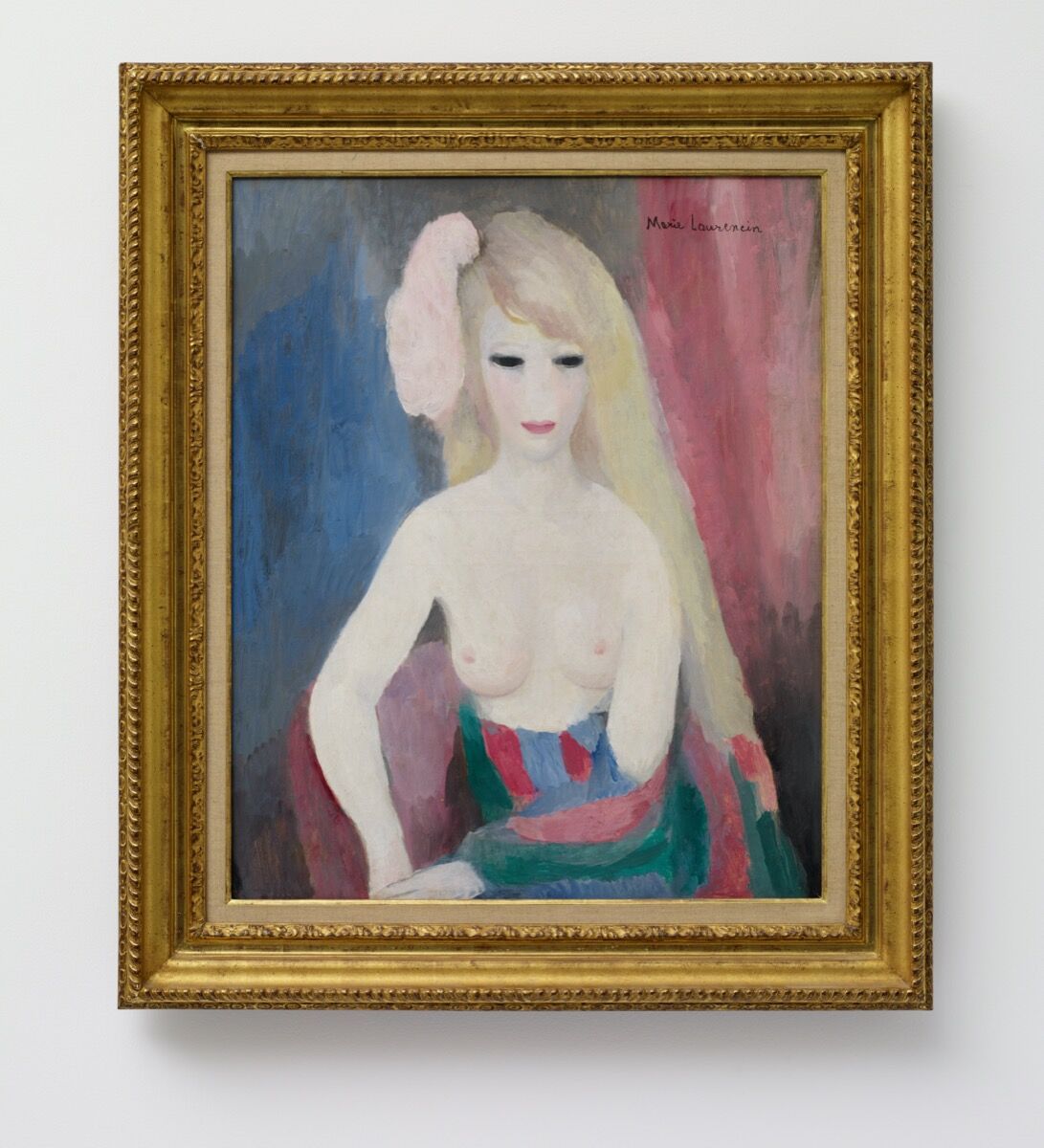 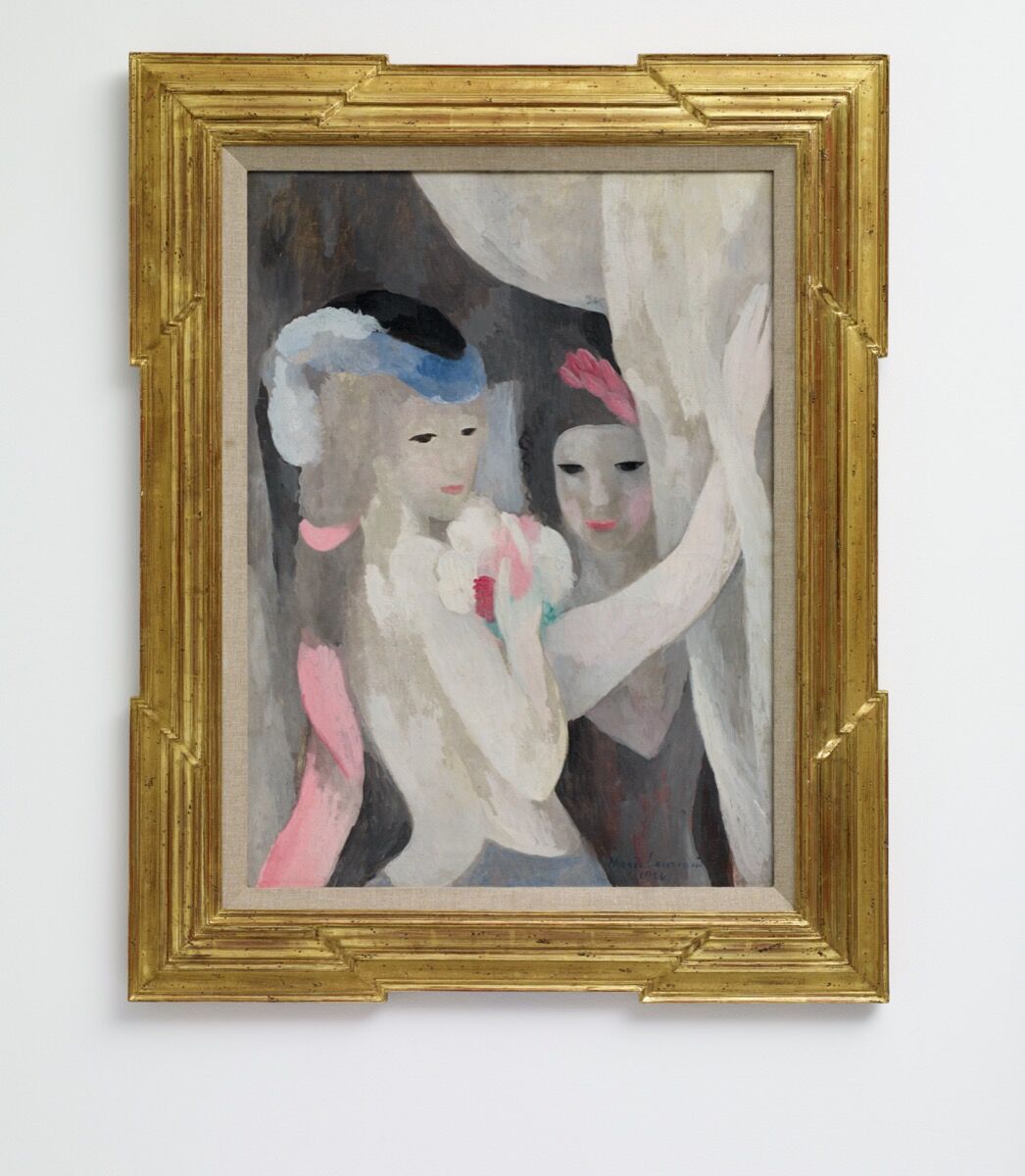 Advertisement
Away from the pressures of the Parisian avant-garde, Laurencin refined her singular approach to painting, distilling the subject matter that would come to define her career. Her new works were populated by unidentifiable women in
Rococo
dress. They lolled, whispered, and danced through ambiguous spaces, staring enigmatically at the viewer with saucer-shaped pupils. When situated in arrangements of two or three, Laurencin’s waifs have the quiet intimacy of playmates or naïve young lovers.
Some sources have suggested that Laurencin was heavily influenced by a medieval Japanese text, The Pillow Book (1002), written by Sei Shōnagon, a lady-in-waiting to the Empress Consort Teishi. The book discusses a society of high-ranking female servants, confined in a royal court. The book may have inspired Laurencin to paint her women holding fans, and to create a claustrophobic atmosphere in many of her works. Writing from 1979,
Judy Chicago
observed, “Behind the artifice and perfumed sweetness of the women in Laurencin’s paintings, there is an aura of sadness that speaks to containment and stifled rage.” 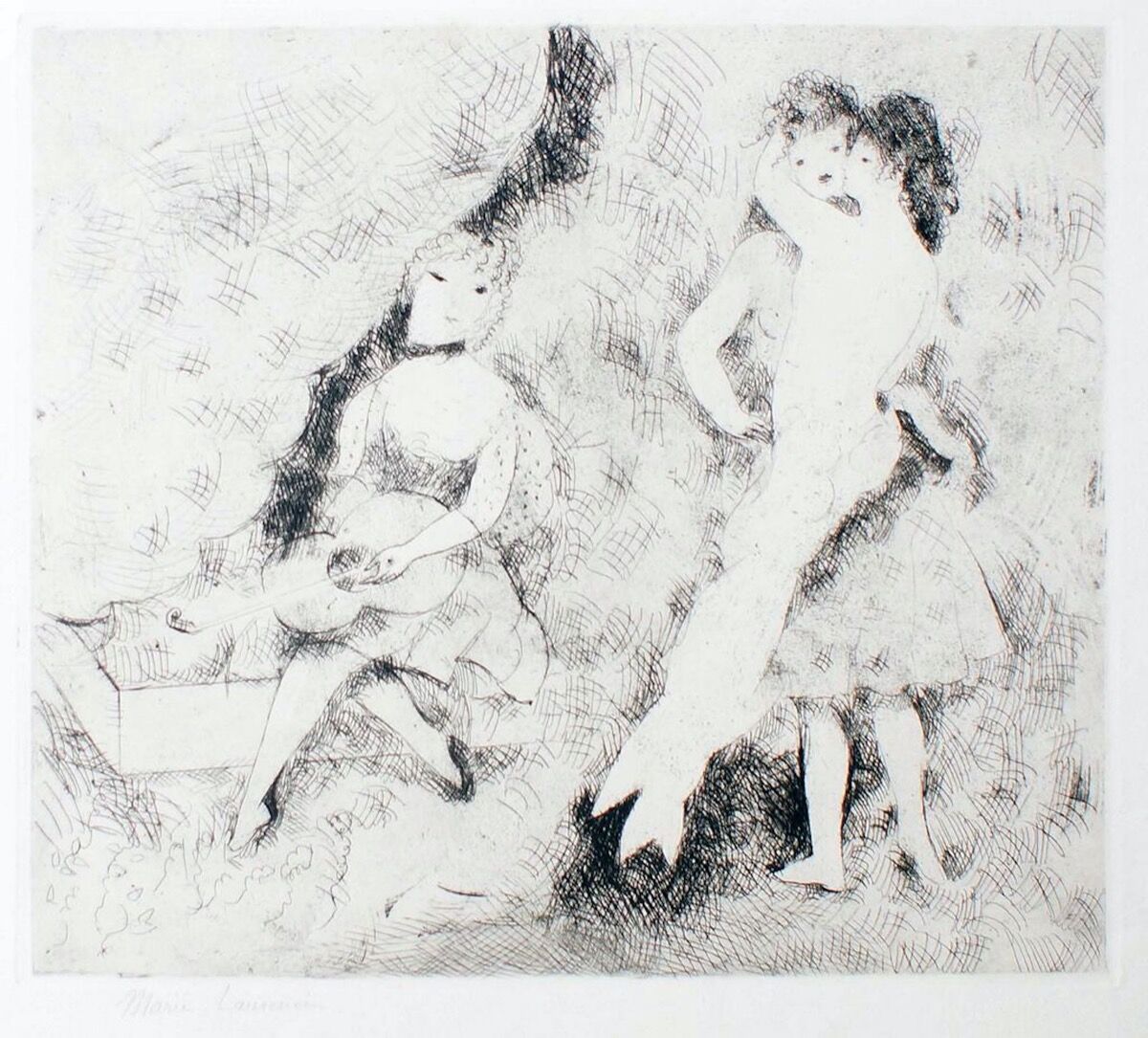 Between 1918 and 1924, the women who curtseyed and hesitated through Laurencin’s canvases began to display increasing sensuality. The artist rejected implied sexual tension in favor of overt depictions of sex: In her canvases from this period, figures caress, kiss, and lie with each other. Yet even when explicitly erotic, Laurencin’s scenes remained dreamlike, rather than seedy.
Laurencin returned to Paris in 1920 while negotiating the terms of her divorce to van Wätjen. Her depictions of women-loving women proved popular. She could, reportedly, afford to sell them as she wished: to charge women less than men, and blondes less than brunettes. In her personal life, Laurencin was as free as she was in her art and pricing strategies. Although details of the affairs are lost, she was known to be involved with a string of creative men and women. 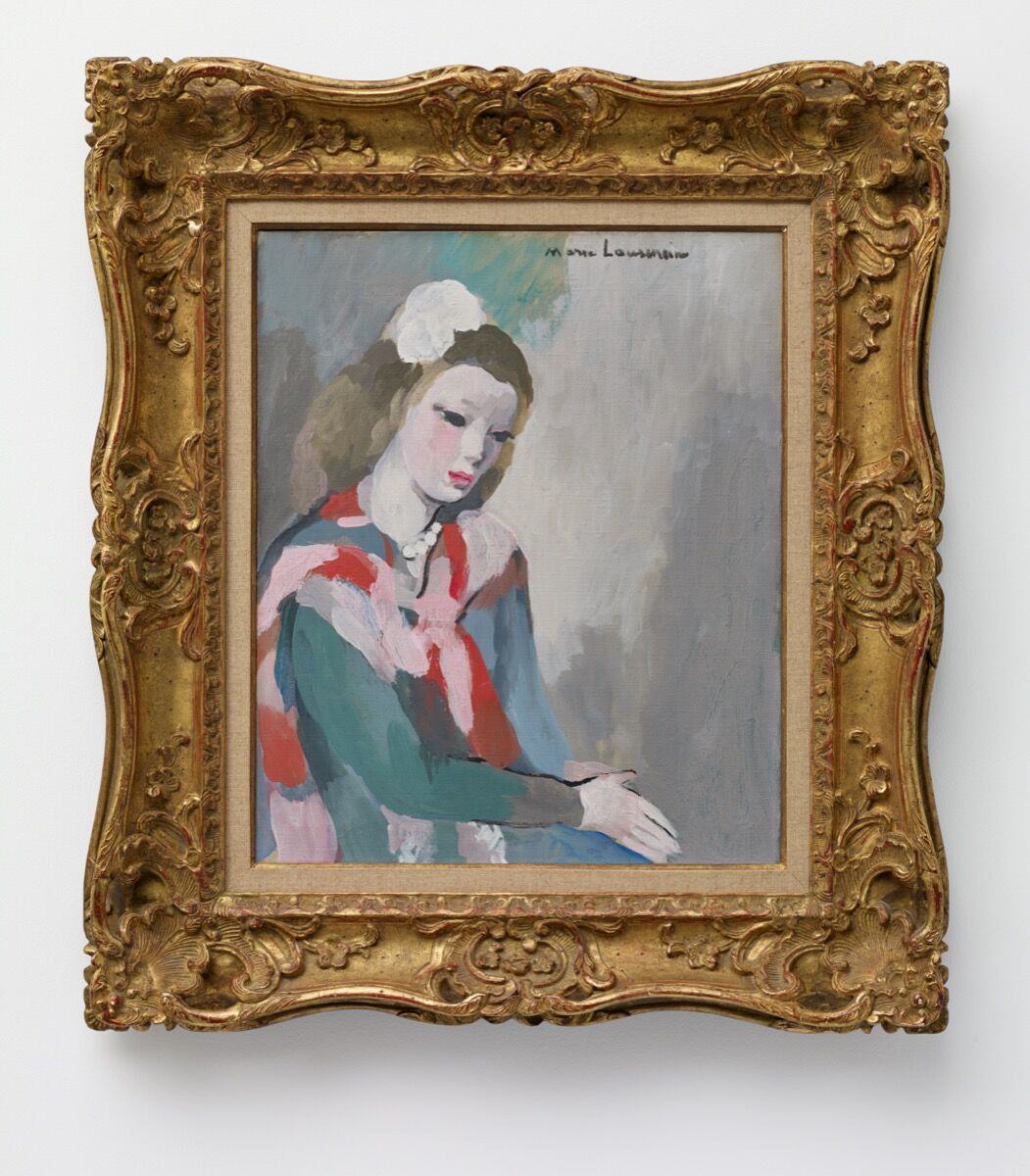 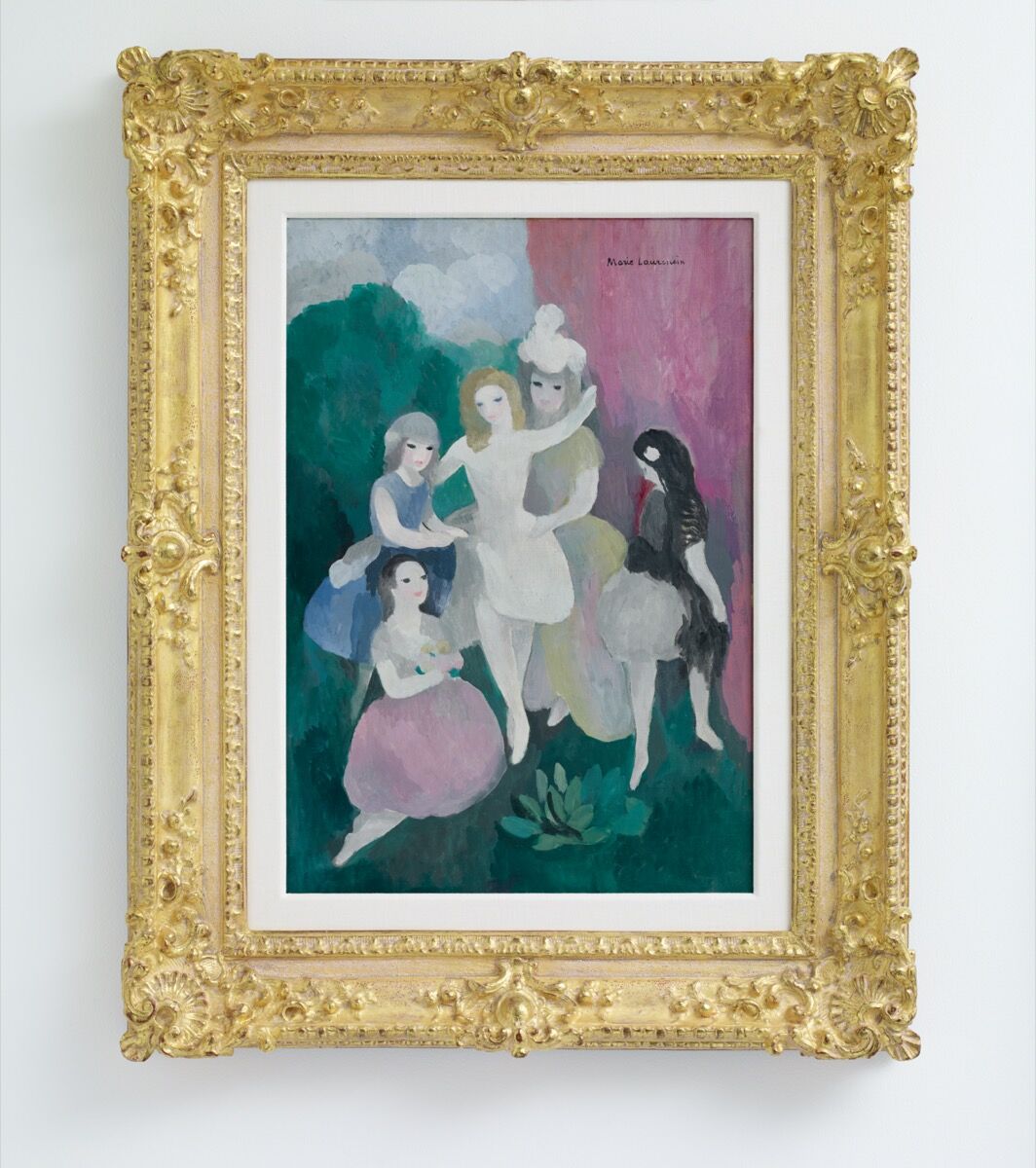 Laurencin’s star continued to rise throughout the 1920s and ’30s. A sought-after portraitist, she painted the likes of Chanel, society figure Lady Cunard, and Jean Cocteau. In 1939 alone, Laurencin was the subject of 11 solo exhibitions. She bought a château with her earnings in the mid-1920s, and invited Suzanne Moreau—generally accepted as her long-term girlfriend—to live with her. After initially employing her as a maid, Laurencin legally adopted Moreau as her daughter, and the two women cohabited for the rest of their lives (the artist died in 1956).
Laurencin’s fame has endured in Japan, bolstered by collector Masahiro Takano, the founder of the Green Cap taxi company. In 1983, the Marie Laurencin Museum opened in Tokyo to house Takano’s private collection, which included more than 600 of her works. It was the first museum in the world devoted to a single female painter.
While Laurencin is represented in a number of national collections, her work is all too often in storage. Her idiosyncratic riffs on Cubism’s reduction and geometry, and on Fauvism’s hallucinatory colors and wild brushstrokes, are not easy to situate in any linear stories about the development of modernism. Her depictions of a feminine utopia have been written off as kitsch. 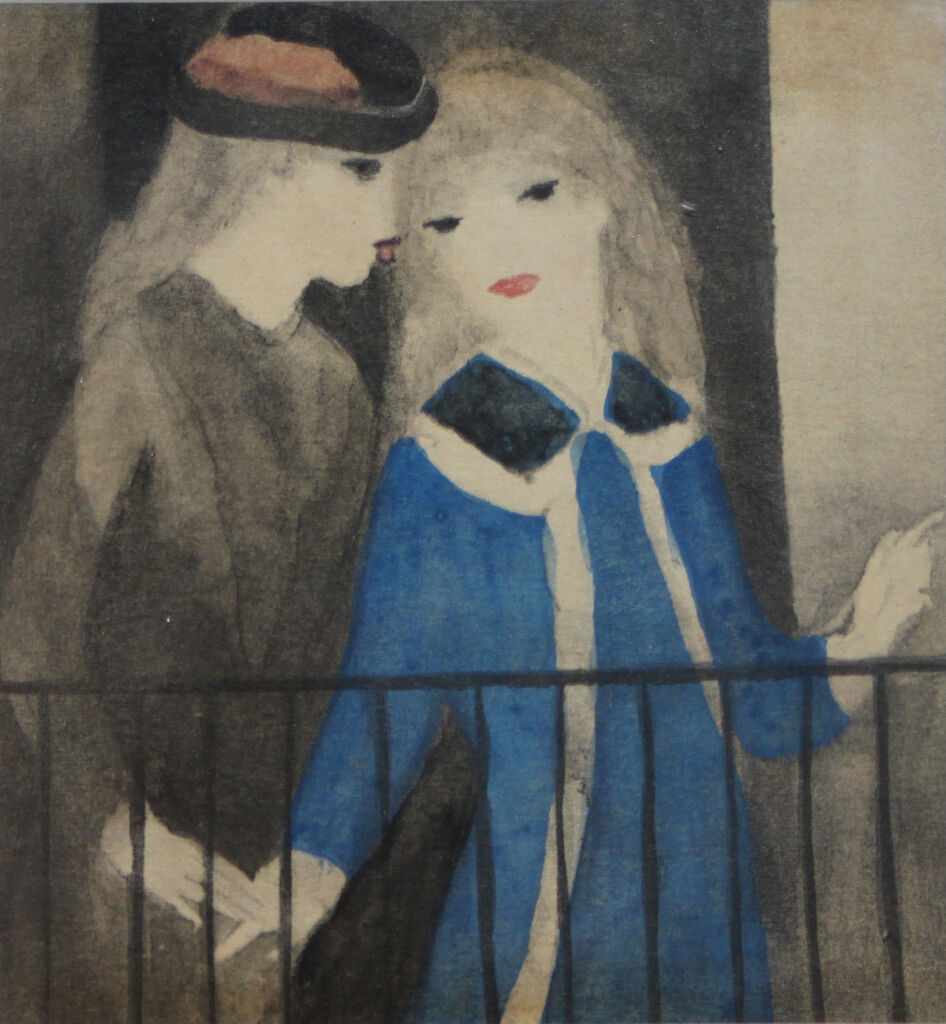 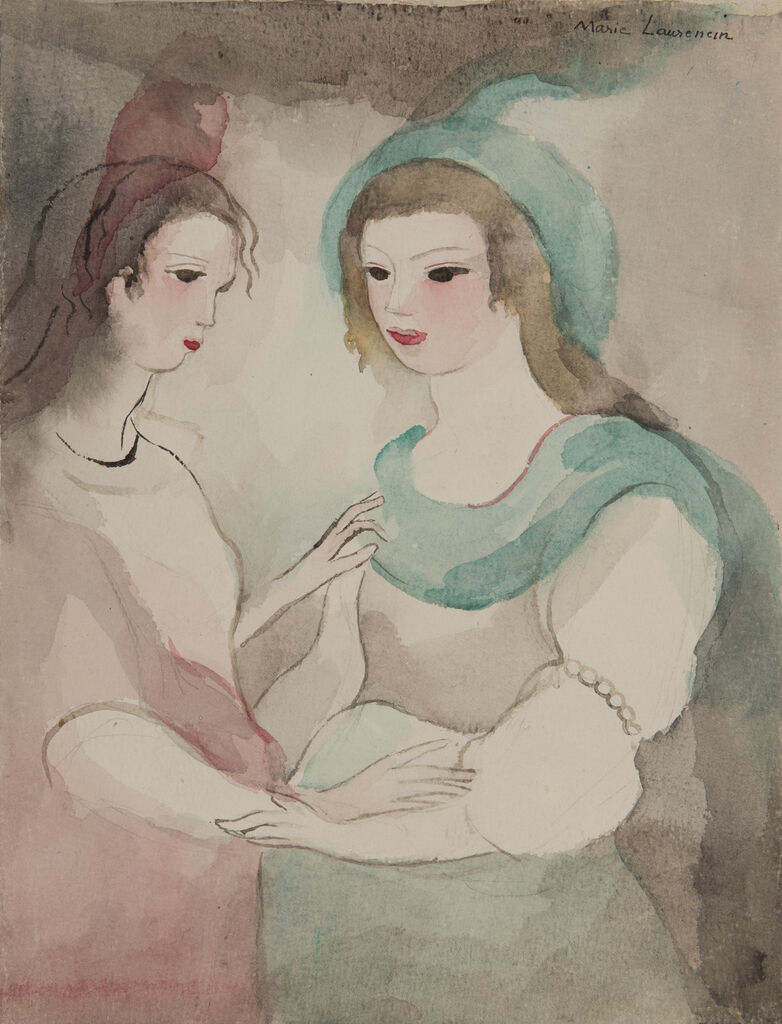 Marie Laurencin
Les deux amies, 1949
HELENE BAILLY GALLERY
For a long time, Laurencin was excluded even from feminist rediscovery. Some critics accused her of promoting a disempowering vision of femininity. Laurencin celebrated women with poetry and prose, but those in search of protofeminist heroines might be disappointed or at least bewildered by her written works. When discussing friends and colleagues, Laurencin essentialized gender with glee. She noted that she was intimidated by the genius of men, and that she adored women since they were innately softer, prettier, and more delicate.
In recent years, however, there have been signs that Laurencin’s legacy is ripe for reappraisal. In February 2020, Nahmad Projects opened the first U.K. solo exhibition of her work since 1947. Speaking on behalf of the gallery, Charlotte Call noted the “surge in interest” the show brought through the doors. 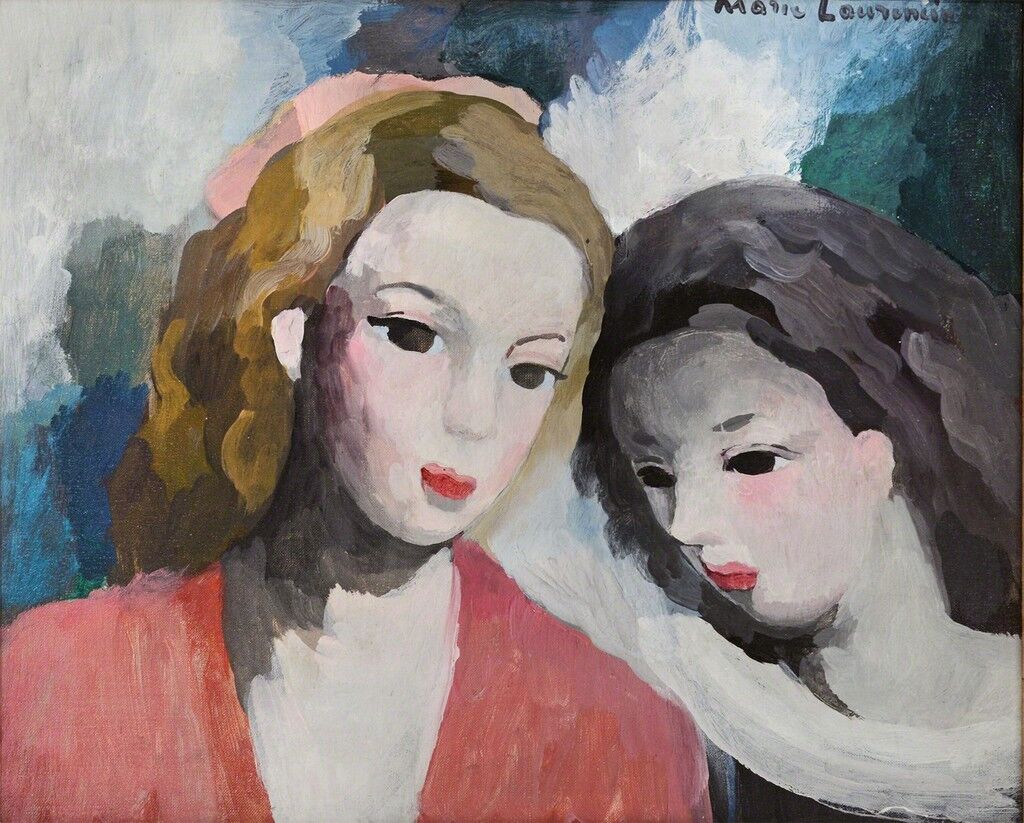 Marie Laurencin
Lesbian Friends, Deux Femmes, ca. 1930
Robert Funk Fine Art
“As soon as we opened, we were struck by the number of visitors of all ages who reached out to exclaim how much they loved Laurencin’s work, and how happy they were to see so many paintings in one room,” said Call. Anecdotally, it seems that these rarely shown paintings have a remarkable power to stick in the imagination. “Many had discovered Laurencin through the small holdings at the Tate Modern in London, or at the Musée de l’Orangerie in Paris,” Call added.
As Western art markets respond to calls for more inclusive collecting practices and for academic approaches to feminism to diversify, is it time for Laurencin’s reputation to undergo its own renaissance? Call believes so. As she put it, “Now we’re in the 21st century, we have the tools to approach queer modernism and feminist art history. We can recognize her paintings for what they are: subtle and subversive.”
Miranda Gabbott
Correction: A previous version of this article referred to a line of Laurencin’s poetry; a few lines of poetry were quoted in the text.
Related Stories