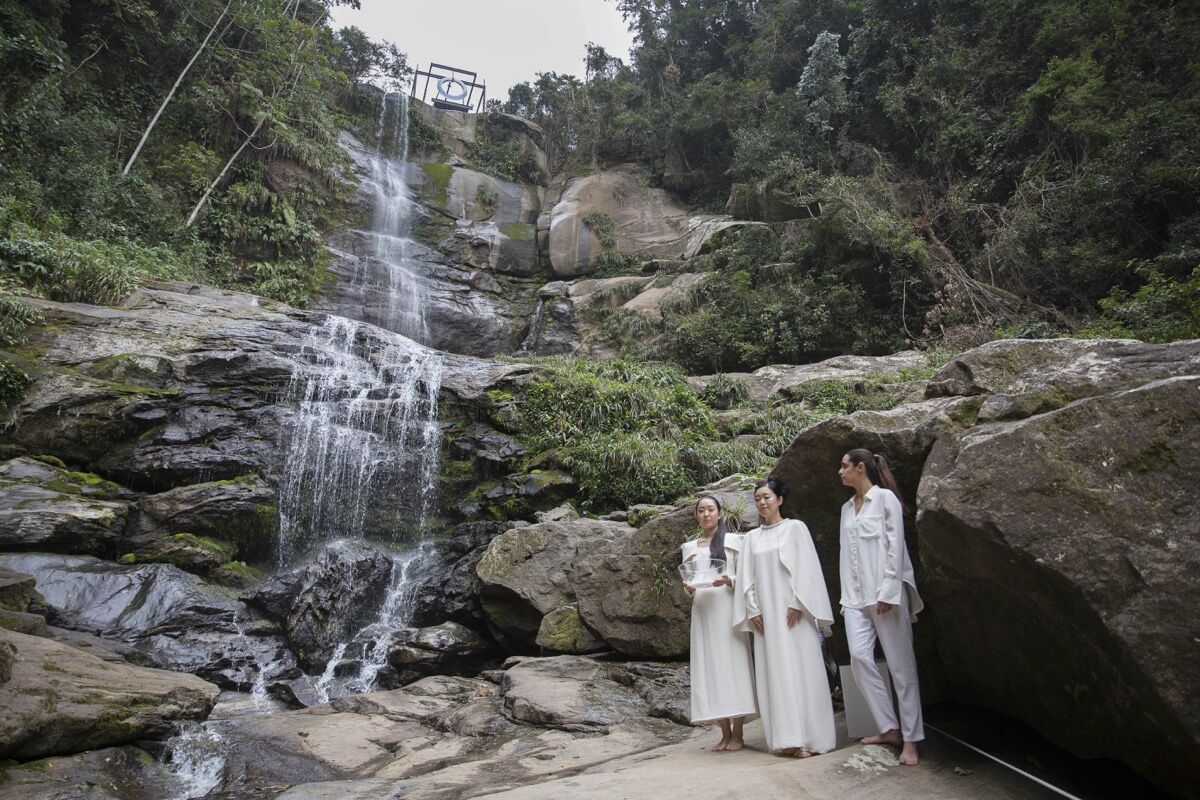 Seven years ago,
Mariko Mori
had an ethereal dream. “It was a very interesting dream, where a ring appeared on top of a waterfall,” she recalled over the phone from her London studio. “I carried the vision with me.” Mori did more than that. She set out to bring the vision to life as a sculptural installation.
In 2011, Mori arrived in Brazil along with her traveling exhibition “Oneness,” and began to search the country for a suitable waterfall. Five years later, on the eve of the Olympics in Rio de Janeiro—a global event for which the ring is an iconic symbol of unity—Mori’s dream has been realized. Ring: One with Nature (2016) is a three-meter-wide ring suspended by metal stilts that sits atop the picturesque, 58-meter waterfall Véu da Noiva, in Muriqui, Mangaratiba, a suburb of Rio that is an hour-and-a-half drive from the city. “It’s not only a beautiful site, but also, in this location, the ring will be aligned with the sun on the winter solstice,” Mori explained. As the sun rises, it backlights the ring, causing its color to transition from a rich shade of blue to a deep gold.
A permanent installation, the work is produced by the Faou Foundation, Mori’s nonprofit in New York, which aims to promote environmental awareness through art installations across the world. (The foundation produced its first work in 2011, a floating light installation in Seven Light Bay, off the shore of Okinawa, Japan.) Faou Foundation has gifted the work to Brazil’s environmental institute, Instituto Estadual do Ambiente (INEA). And while Ring: One with Nature was not conceived with the Olympics in mind, its debut strategically coincides with the games, and is part of Celebra, the official cultural program of the Rio Olympics. “Because this ring is really honoring nature,” Mori told me, “I thought it would be beautiful to add it to the five symbolic rings of the Olympics. It’s a wonderful opportunity to share the concept of oneness with nature during this very unique moment of unification of the world.”
The Japanese artist is best known for works that consider mortality and spirituality, and tap into advanced technologies. Her best known work, WAVE UFO (2003), which featured at the 2005 Venice Biennale, was a participatory installation that incorporated real-time computer graphics and brainwave technology, all encased in a spaceship-like pod. It encouraged viewers to consider their place within the cosmos. In recent years, Mori has also created her “Cycloid” series—large swooping sculptures made from aluminum and finished in white pearly sheens—which is inspired by scientific theories that claim our universe has no beginning or end.

Despite being man-made, Mori’s work fuses well with the natural beauty of its environment, and environmental factors were of chief concern in producing and installing the work. The ring itself and the armatures that suspend it are made from materials that can weather harsh light, wind, and rain, but more importantly, they’re made from materials that are sensitive to the surrounding ecosystem. “The work is a symbol of the connection between human and nature,” Mori explained. “It really extends or continues the tradition of honoring nature from even prehistoric times.”
Starting this week, visitors will be able to view Ring: One with Nature from the foot of the waterfall, within the lush rainforests of Tijuca National Park, a short hike from the entrance. “It’s a reminder that nature is a reflection of us, and we are also a reflection of nature,” Mori offered. “I hope that people who visit the site can reflect on nature and create their own ring in their heart, and eventually it will create a chain of rings around the world.”
—Casey Lesser
Related Stories