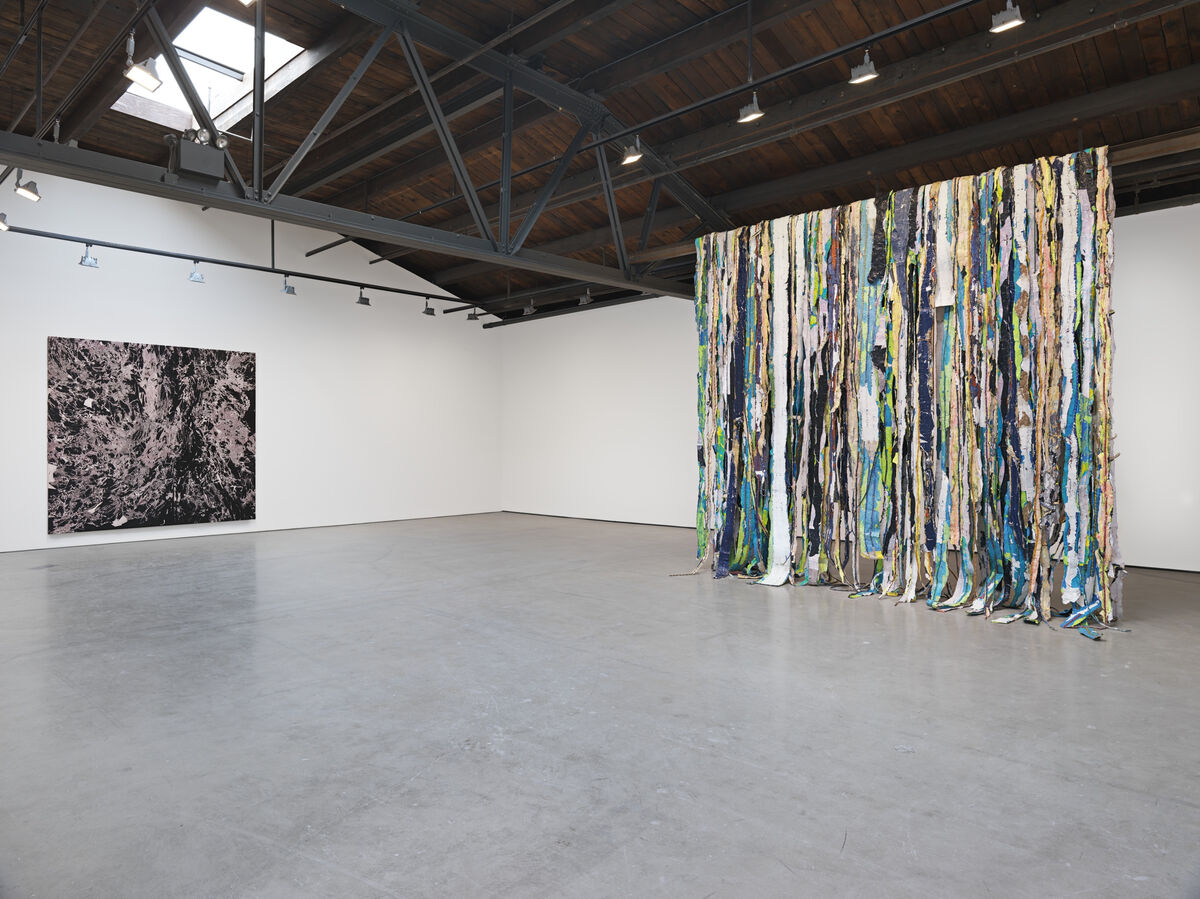 “It’s like a ghost, like a ghost body,”
Mark Bradford
says at the preview of his new exhibition, “Be Strong, Boquan,” at Hauser & Wirth, in which corporal allusions surface in dense, engulfing abstractions full of lashings and pockmarks of gluey paint. These canvases will feel familiar to those who know Bradford’s practice (and especially to those who saw the artist’s recent solo exhibition at the Hammer Museum in Los Angeles), though they sooner resemble leathery, scarred human skin or cellular structures than the territories of his earlier paintings. A Los Angeles native who grew up working and conversing with the clients at his mother’s South Central hair salon, Bradford is widely recognized for exploring social issues in abstract paintings—compositions that marshall political and personal content into palimpsest-like psychogeographic maps and meditations on language.
Many of those on view at Hauser & Wirth still evoke soaring aerial perspectives: Untitled (Stain) (2015), with its silvery and black pigment, loosely marbled, could be the serial peaks of a mountainscape, while in Let’s Walk to the Middle of the Ocean (2015), tectonic plates seem to open onto tracts of aquamarine seawater. But Cigarettes and Bubble Gum (2015), with a network of tightly hatched, gum-pink incisions in a field of black and blueish grey, applies, rather, a macro lens, suggesting hundreds of firing synapses.

“I started looking at cells underneath a microscope, sarcoma,” Bradford says of taking the AIDS crisis as a point of departure for recent works. “But then they started to just become marks. I think the show does have to do with the body, but the body’s not present.” In Dead Hummingbird (2015), sunbursts of red, black, and white grooves gouged into the painting’s surface radiate out around a passage of pure black—loosely recalling the form of a petrified hummingbird on its side. “These fissures, these cuts, and this bloodiness, it’s like skin peeled back. The rawness of skin before it heals up” he explains. “A thrush. The thrush or rash that people with HIV used to get on their skin. You don’t see a lot of that stuff now because of all the medication.”
Less familiar, though he has worked in the medium before, are Bradford’s video works, one of which debuts at Hauser & Wirth. A vast banner video spanning the entrance (and the gallery’s entire width), Deimos (2015) plays a short loop in which disembodied orange and brown rollerskate wheels, the worn relics of New York’s 1970s roller-disco scene, spin from one end to the other, to the sound of the disco icon Sylvester’s “Grateful.” This marks something of a homecoming for those wheels, which are leftover from the bygone days of the The Roxy—a legendary gay dancehall and roller disco once located at the corner of Manhattan’s 18th Street where the gallery now stands—and which for years gathered dust in the gallery’s backroom. At some point over the last few years, the gallery’s directors decided to send the stockpile of old skate wheels to Bradford’s L.A. studio, resulting in this light, whimsical ode to an era. 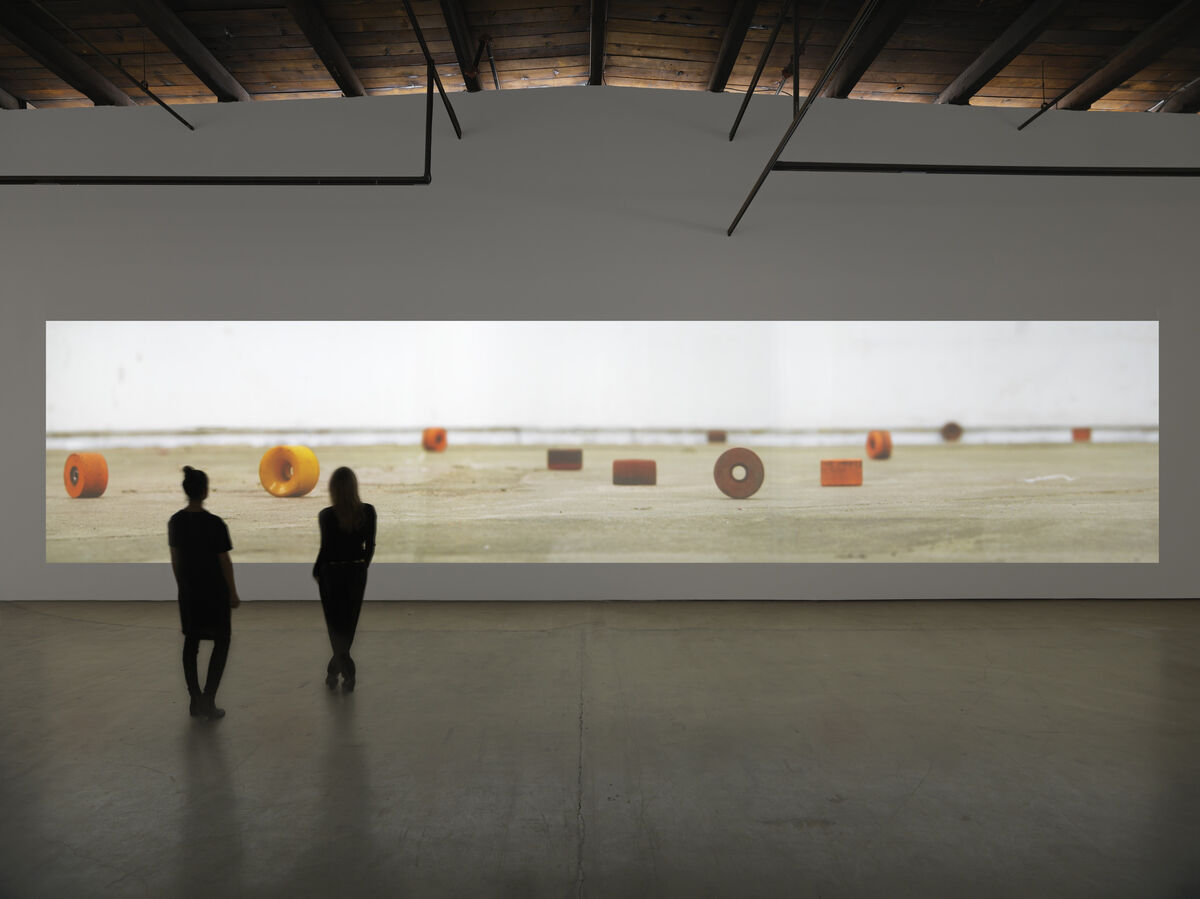 Advertisement
The real showstopper, however, is the six-minute-long video Spiderman (2015), in which Bradford assumes the role of a black stand-up comedian, riffing on Eddie Murphy’s 1983 comedy Delirious—except the artist’s image is absent. Rather, his disembodied voice can be heard sending up various facets of African American culture in flamboyant vernacular. A red spotlight signals the presence of an invisible performer in front of a black screen on which his words roll out in text form, synchronized, like the subtitles in a karaoke set. The words bounce in staccato, dance, and fade according to Bradford’s rhythms and intonations. “It’s every single person I’ve ever seen in the hair salon. This history, this oral history and comedy,” he says. “You can use comedy to talk about social issues. Because I grew up in a hair salon, I was always in charge of telling the stories. I was Marco Polo, I traveled all over the world and brought the stories back. So I learned how to tell stories.”
Traces—of a performance, a process, a memory, a roller disco, or a body—are at the center of Bradford’s concerns as an artist and at the heart of his impulse toward abstraction. “When it comes to the big topics like race, I’m a shadow person,” he explains to a crowd at the preview. “I stand back and I move things around. I think that’s the only way that I can play with and understand these big, heavy subjects. I play with them in the shadows.”
—Tess Thackara
“Be Strong, Boquan” is on view at Hauser & Wirth, New York, Nov. 7th–Dec. 23rd, 2015.
Follow Mark Bradford on Artsy
.
Related Stories