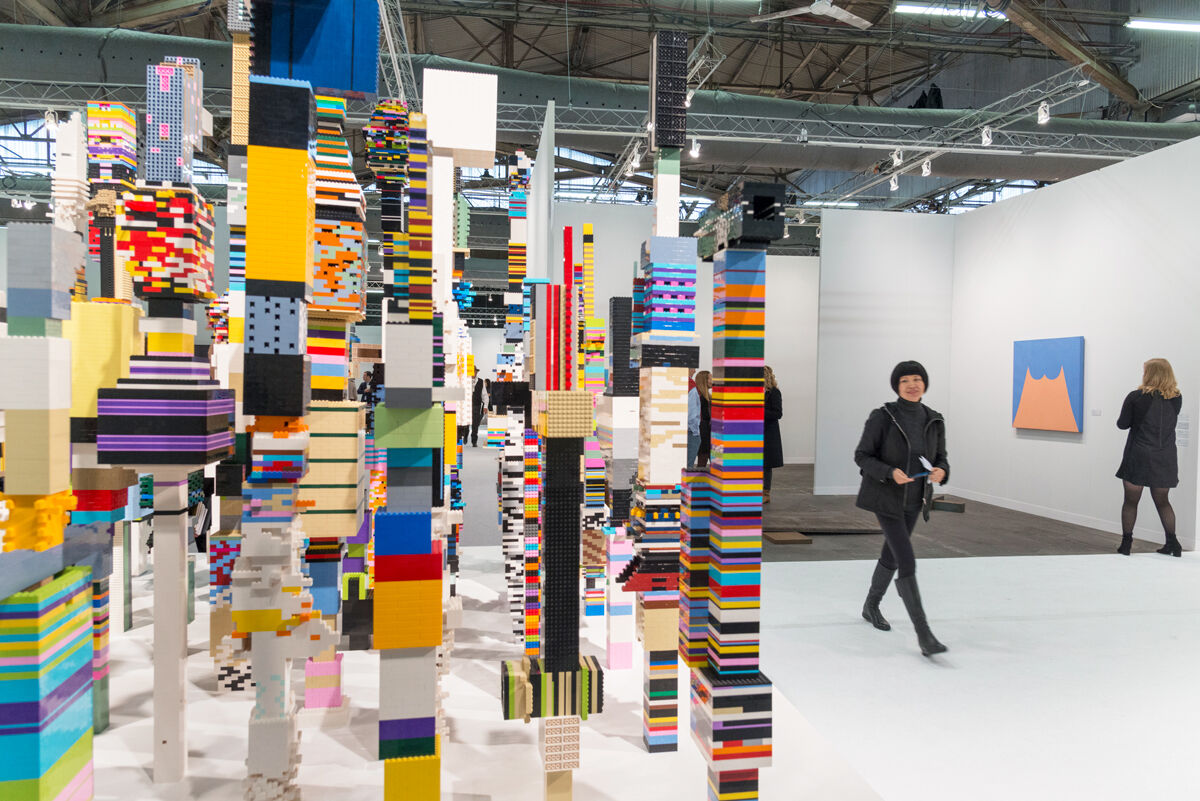 Installation view of Douglas Coupland, Towers, 2014, at The Armory Show, 2017. Photo by Adam Reich for Artsy.

On Friday at The Armory Show, a panel of art insiders gave their thoughts on the future of the market to a packed house. Moderator Kelly Crow of the Wall Street Journal was joined by auctioneer Simon de Pury, art advisor Todd Levin, collector Alain Servais, CEO of Athena Art Finance Andrea Danese, and gallerist Dominique Lévy of Lévy Gorvy.
Crow opened the discussion by prompting the audience members to do the near-impossible: truly use their imaginations.
“Close your eyes and try to conjure a color that you have never seen before,” said Crow, admitting that when asked to do the same thing she failed—only familiar colors came to mind. That reflex is “an apt metaphor for trying to understand the art market,” she said, before diving into a conversation that at times tried to conjure the future, but largely consisted of parsing more familiar recent market trends. That’s not to say there weren’t valiant attempts at prognostication, up to and including the use of props: A smiling Levin at one point pulled out a Magic 8-Ball when asked how he decides if a work of art is a good purchase.

Don’t Expect Data to Tell You What to Do

The art market will never behave the way some investors perhaps yearn for it to behave—that is, as a normal commodity market. “The bottom line is that art is a qualitative object,” Levin said. “Not a quantitative set of data points.” The art world, never one for rapid change and disruption, is nevertheless starting to integrate quantitative data, a primary example being online databases of auction prices. As more information becomes available online, buyers are seeking to complement their subjective taste with quantitative assessments. But available sales data is inherently limited and spotty, particularly for emerging artists with a minimal or nonexistent track record.
Even for more established artists, each work is different, Levin said. If a work has been damaged, or has been burned at auction before, there will always be a role for connoisseurship, knowledge, and personal experience when assessing a purchase. But De Pury acknowledged the desire, even for those who buy a work out of love, to not want to “throw this money out the window,” as he put it. “You feel vindicated if your passion translates into a good investment as well.”

Big Money is Changing the Market

Though the art market is still comparatively miniscule compared to other sectors of the economy (in 2016, it was roughly equal, in total value, to how much Americans spend on pet food, Servais said), it has expanded rapidly in recent years. Servais mentioned the fact that, in 2001, contemporary artists (those born after 1960) at auction netted $48 million annually. In 2007, that figure was $800 million. The size of the market “changed, completely, the rules of the game,” he said. “This is also what brought the finance guys,” Servais continued, putting it on the radar of those looking to financialize art—something he said is a major mistake.
Danese said the amount of wealth pouring into the market may push it to be a more efficient, data-driven area of commerce. Those investors—many of whom come from finance—will want clear information in order to make informed decisions, as they might with stocks or other investments. “There will have to be a dramatic change,” he said. Levin said this was also a function of macroeconomic factors, such as low interest rates, which were intended to jumpstart the economy. One effect they’ve had is to allow vast amounts of money to end up in the hands of a relatively small group of people, often the same people who buy art. “That money has to go somewhere,” Levin said.

A 2016 Deloitte finance report found that 72% of collectors “bought art for passion with an investment view.” And there is no doubt money is impacting, not just the market, but art itself. Servais said that New York is “probably” the “sickest city in terms of the influence of money at all levels of the arts...It even goes to the level of the artist. Because the artists are producing what the market wants.” Take the advent of Zombie Formalism, when artists were pumping out hundreds of monotonous abstract works to meet the demand of speculators. Broadly, the tastes of new collectors without experience, even if they’re not speculators, tend to gravitate towards picking up art that isn’t too challenging, incentivizing artists to produce work for consumption and not for its artistic value.
For her part, Lévy critiqued treating art purely as a question of dollars and cents. “We’re talking about a market, and we’re forgetting we’re talking about art,” she said, adding that to chalk the growth of art simply to more and more money “actually makes me angry.” Challenging the idea that market factors are primarily responsible for a booming interest in art, Lévy instead cited an increasing number of interested collectors, a more globalized world, people venturing out of their cultural niches, and artists entering the digital space as the key factors driving the market. Focusing purely on the monetary and not on the intangible aspects of collecting and the creativity of artists is the “exact thing I would like to see changing,” she said. And despite the emphasis on making savvy financial plays in how one purchases art, she’s seen people buying spontaneously and emotionally.
Though the future is murky, one thing is certain: Even though the art market is comparatively small, there is room to grow. Though some have put excess cash in art, Danese noted only 4% of ultra-high-net-worth individuals are buying or collecting art. “You have a huge opportunity out there, Dominique,” he said, smiling in the direction of the gallerist.
Isaac Kaplan is an Associate Editor at Artsy.
Related Stories

Is Art an Object of Passion or an Asset Like Any Other? 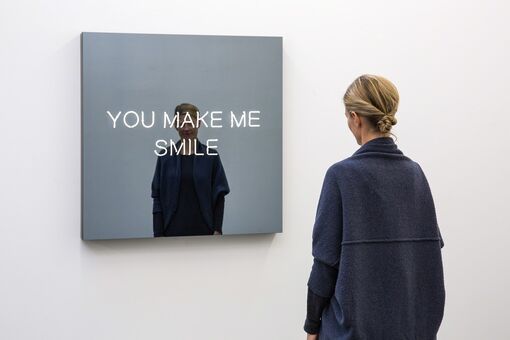 Is Art an Object of Passion or an Asset Like Any Other?
Anna Louie Sussman
Mar 3, 2017