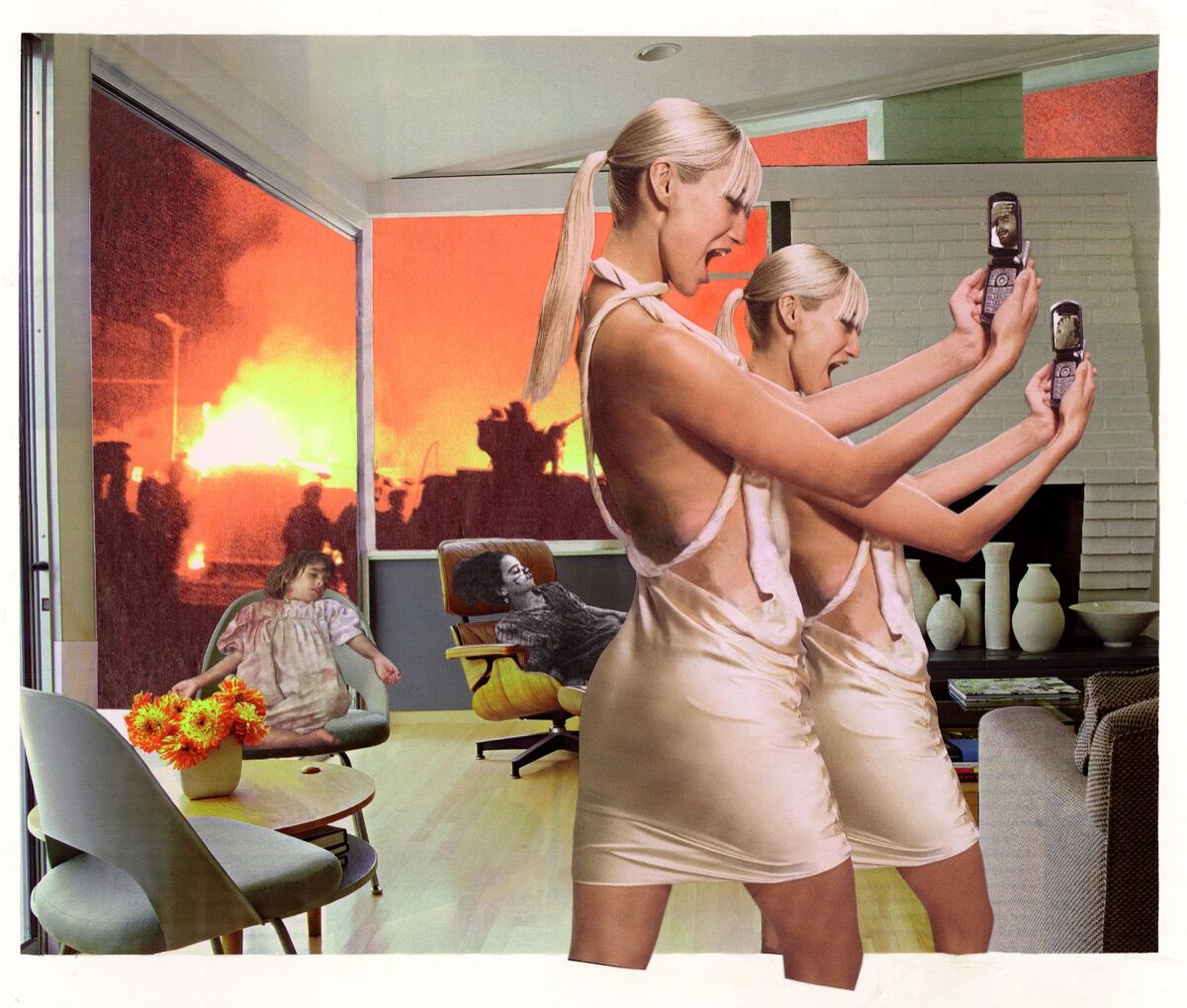 Martha Rosler
thinks that Vietnam anti-war literature of the 1960s and ’70s was hideous. “It would be these long texts that looked like they’d been translated from a foreign language, and they didn’t have images,” the artist remembered during a recent conversation with Artsy. The pamphlets and other materials, she said, looked like they were made by people who were somewhat demented. Rosler decided the cause needed a makeover.
These days, it’s difficult to imagine a political position without a strong graphic identity, not to mention a cohesive social media presence. The Women’s March on Washington created a simple logo comprised of three silhouettes of female faces. The National Rifle Association has a circular logo with with an eagle standing on guns. Most groups now recognize the need for impactful visuals; in 2002, the Design Action Collective was formed to create unique visual languages for clients ranging from Greenpeace to Black Lives Matter.
Yet Rosler was ahead of her time when she reconceived the printed matter distributed at marches and protests. As part of her art practice, she was already making photomontages to counter women’s representations in the media. Her series “Body Beautiful” (1966–72) unites pictures of female bodies with those of appliances (Hot Meat links a bared breast with a stove, Damp Meat a bare ass with a dishwasher).
Rosler decided to apply the formal concepts and techniques she’d developed in that series to one with an antiwar undercurrent. She used a Xerox machine to create new collages, which she handed out at rallies. Entitled “House Beautiful: Bringing the War Home” (1967–72), they juxtapose Time magazine’s shots of the Vietnam conflict with images culled from House Beautiful, a home décor publication. 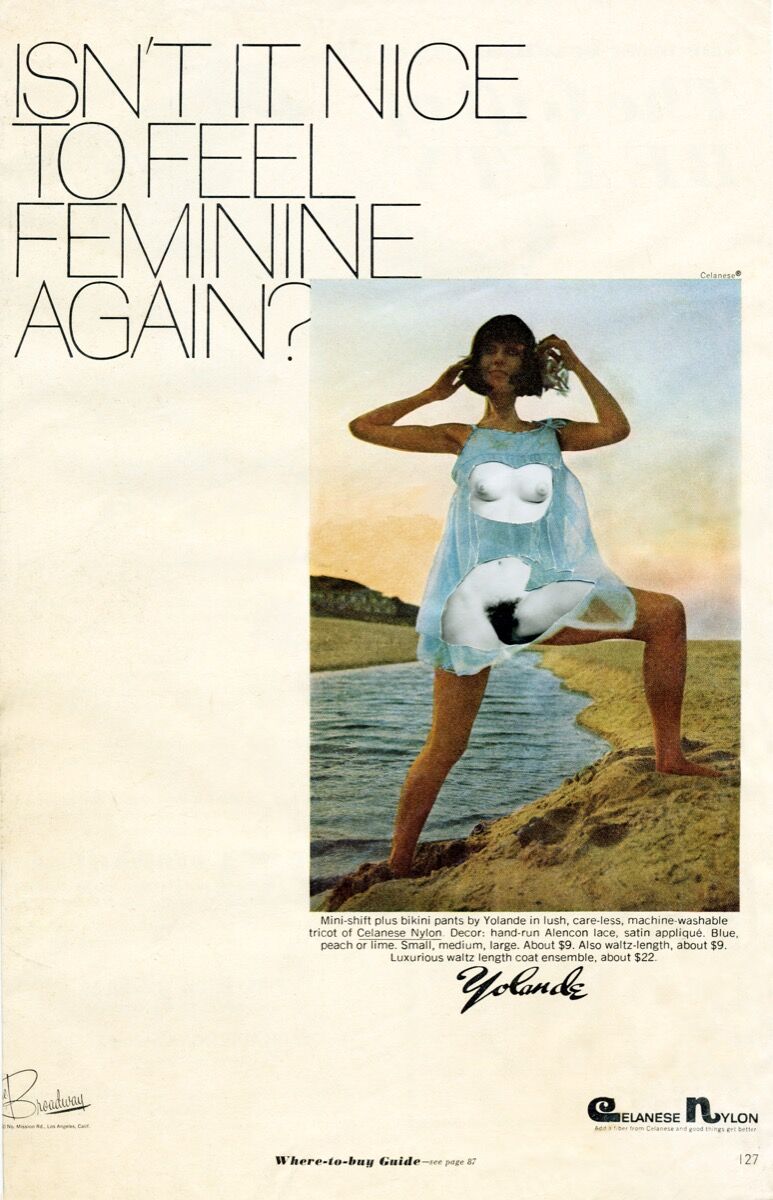 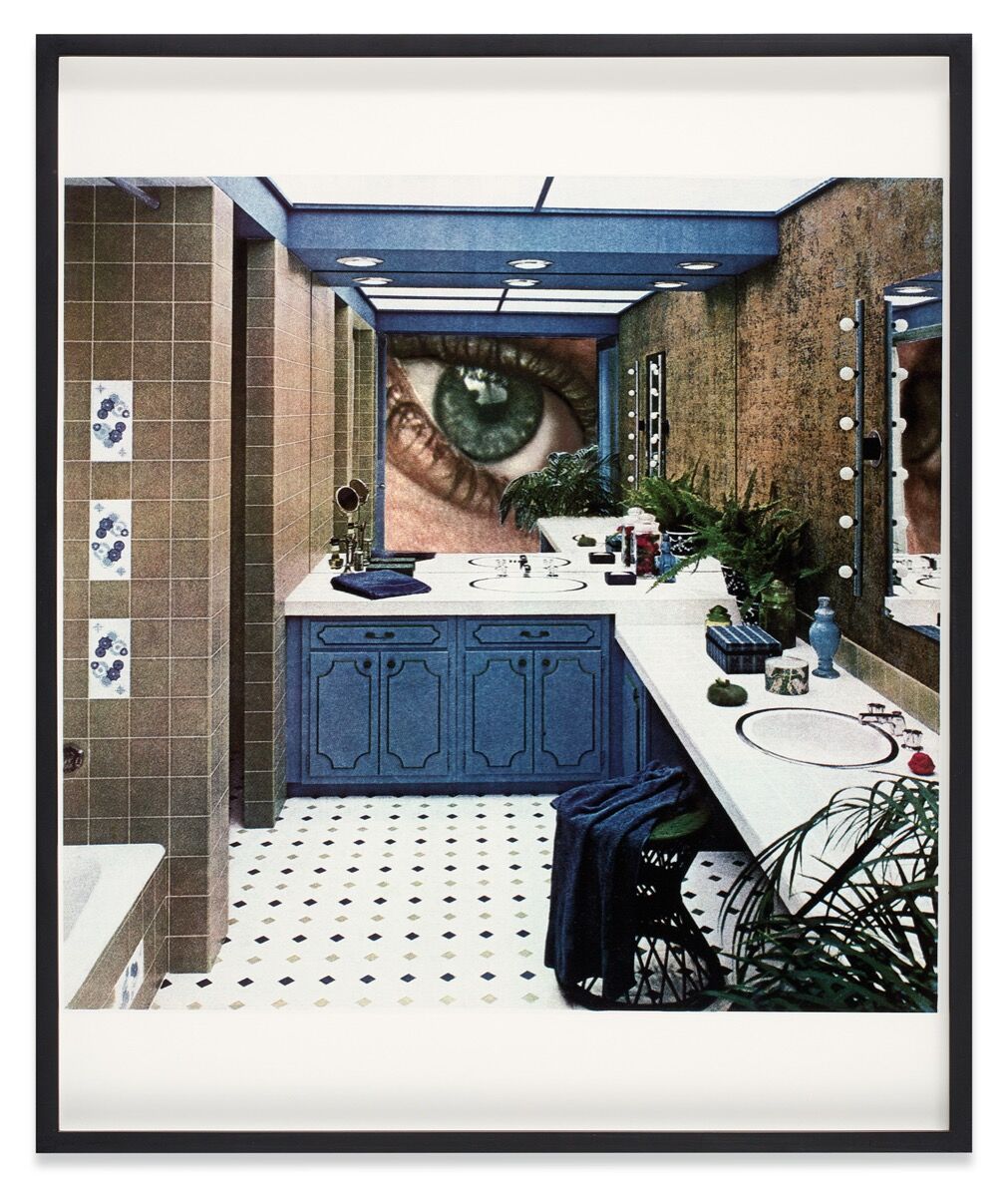 In Cleaning the Drapes, for example, a slim woman with a fashionable haircut appears to steam elegant, paisley-patterned curtains. Outside her window, we might expect to find a well-manicured suburban yard; instead, we see a harrowing black-and-white scene of helmeted soldiers and their guns amid a rocky fortification. In another work from the series, House Beautiful: Giacometti, the windows of a regal sitting room with a floral sofa and pricy-looking artwork (including an ominous
Alberto Giacometti
sculpture) look out onto a black-and-white beach filled with immobilized bodies.
“She decodes how images work by taking them apart,” said Darsie Alexander, who’s curating an upcoming retrospective of Rosler’s work at New York’s Jewish Museum, “which is what a collage structure does—quite literally taking them apart and putting them back together again, often in really jarring configurations.” The power of “House Beautiful,” she suggested, lies in how the series merged international and domestic tribulations.
“I saw the clear reference to the home itself as being central to our ideology of why we were fighting people abroad,” Rosler said. American capitalism—and its glorification of all the domestic goods, appliances, and finery that money could buy—contributed to our grave fear of Communism. North Vietnam posed a purely ideological threat to the United States. We were fighting—and killing millions of people—over divergent economic conceits.
Rosler circulated her pictures at public protests and in underground newspapers, including Goodbye to All That (named for the Robert Graves autobiography about fighting in World War I, not the popular Joan Didion essay about leaving New York for Los Angeles—“No one I knew really liked Joan Didion,” Rosler said).
The artist, of course, wasn’t the first to employ photomontage techniques for political ends. In fact, the originators of the medium—German
Dadaists
such as
George Grosz
,
Raoul Hausmann
, and
John Heartfield
—used collaged images to impart timely messages as early as the 1910s.
One of Heartfield’s most famous works, Adolf, the Superman, Swallows Gold and Spouts Tin (1932), depicts Adolf Hitler’s face atop an X-rayed body, revealing coinage hiding inside his organs. The figure has a swastika for a heart. Heartfield transforms Hitler into a machine whose party affiliation has co-opted his humanity. 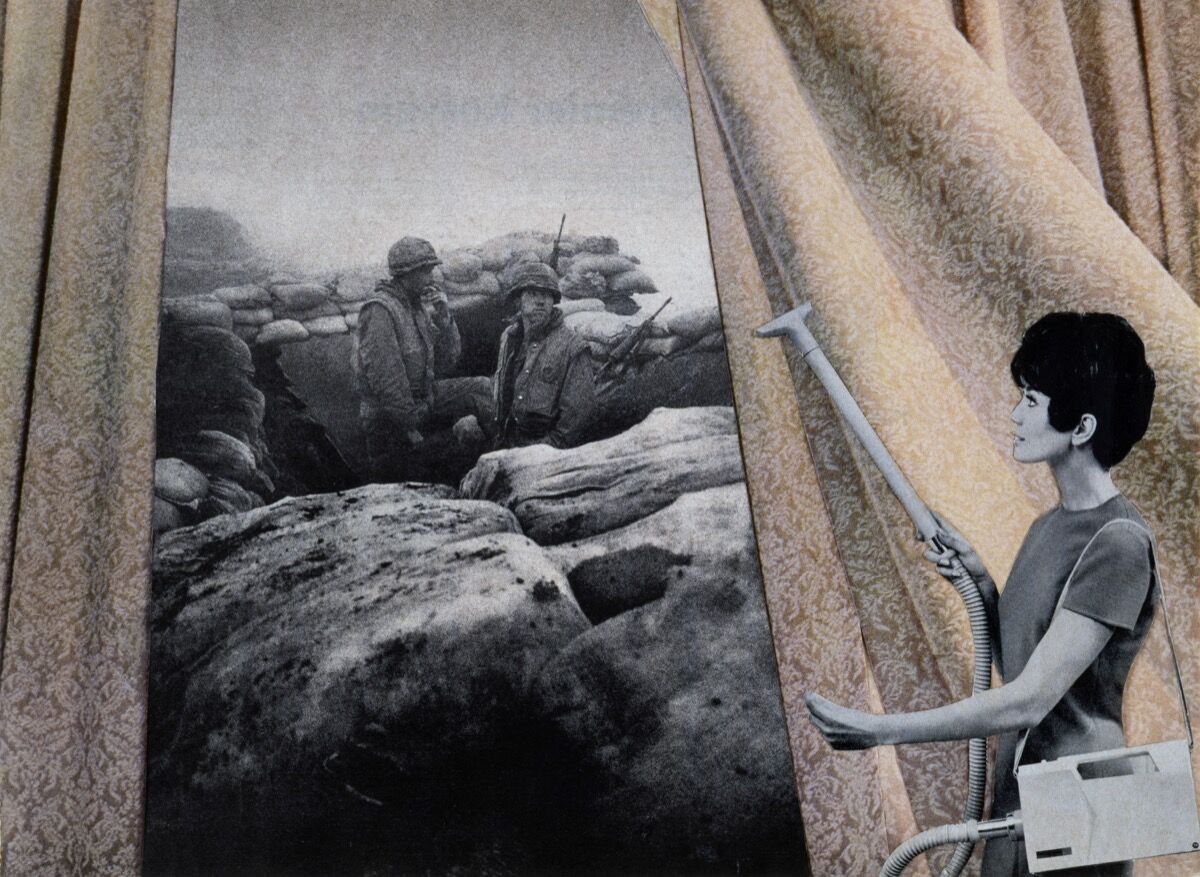 Advertisement
“Collage has always been about disrupting realities,” said Alexander, “often with an edge of satire or critique.” Scholars consider Dada itself to be the first art movement explicitly devoted to upending societal norms. As
Tristan Tzara
wrote in his 1918 Dada Manifesto, “Every product of disgust capable of becoming a negation of the family is Dada; a protest with the fists of its whole being engaged in destructive action.”
Rosler’s layouts are similarly impactful and unsubtle, aimed at denying broadly accepted American structures and ways of living. Though Rosler doesn’t recall how the public responded to her collages, history has served them well: Over the past 10 years, the J. Paul Getty Museum, the International Center of Photography, and the CCA Wattis Institute for Contemporary Arts have all exhibited them. They’re instantly digestible, making them perfect for our high-speed digital times.
In 2003, Rosler returned to her “House Beautiful: Bringing the War Home” series after the United States initiated the Iraq War. She feared that people would condemn her work as tired, thinking she simply lacked new ideas. “Well, what are we doing that’s different?” she said, defending her choice to revisit old strategies. “This is exactly the same scenario.” She points out that the Iraq conflict has lasted even longer than our engagement in the Vietnam War; there are still American troops in the country.
Between 2003 and 2008, Rosler created new photomontages with a distinctly 21st-century feel. Photo-op (2004), for example, features two identical blonde women, who at first glance resemble Paris Hilton or Ashley Tisdale, screaming at their flip phones. Behind them, apparently hurt and tired children (refugees, maybe) sprawl in two chairs. Outside the windows of the modernist home, fire rages. Narcissism, narrow-mindedness, and wealth contrast with nearby destruction.
Despite the repetition of American folly, Rosler still believes in protest. “Being out in the street is what gets attention from actual governments,” she affirmed, noting that Henry Kissinger—who served as a political consultant during the war, and then Secretary of State—admitted that “we couldn’t keep bombing because the kids were in the streets.” 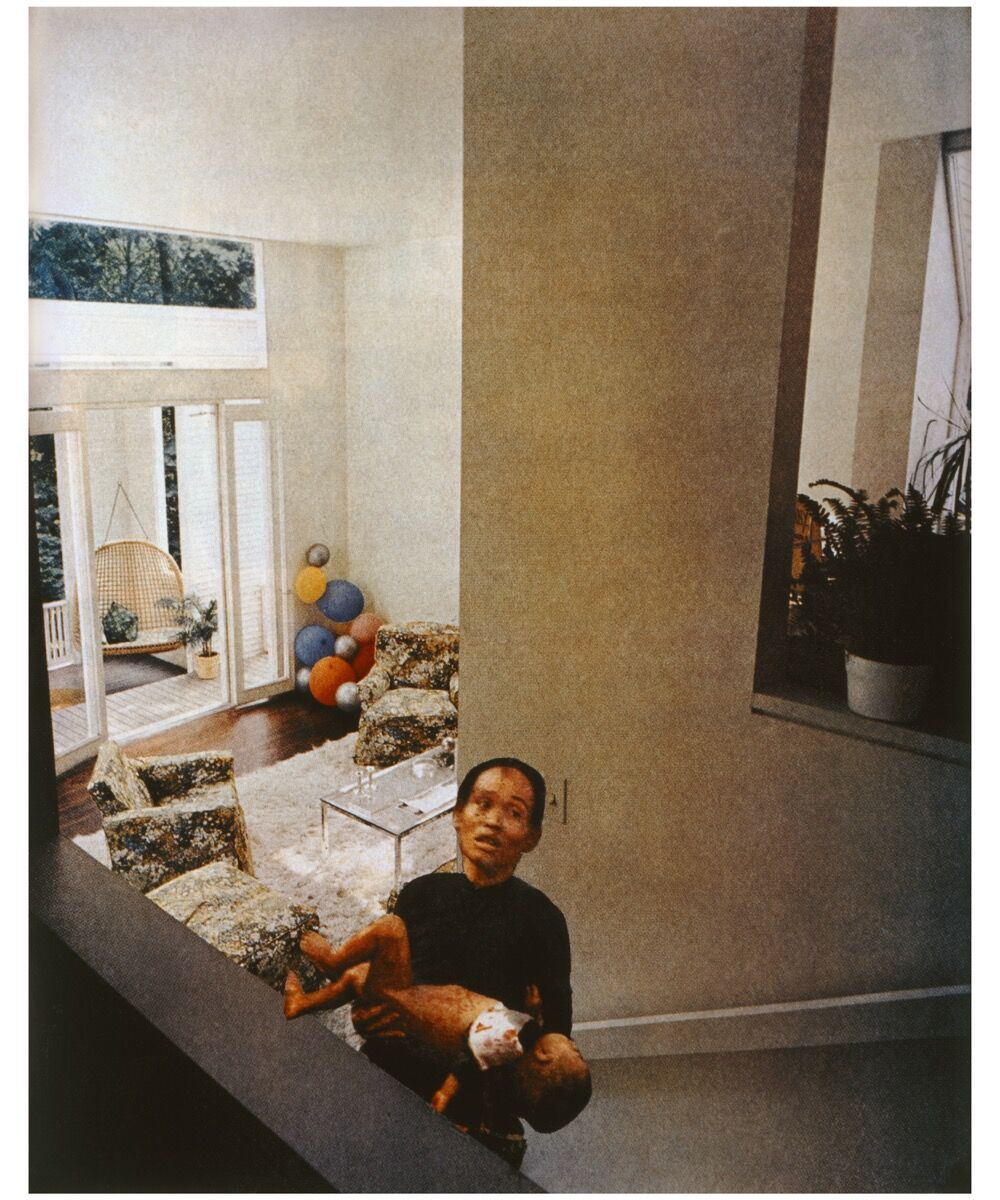 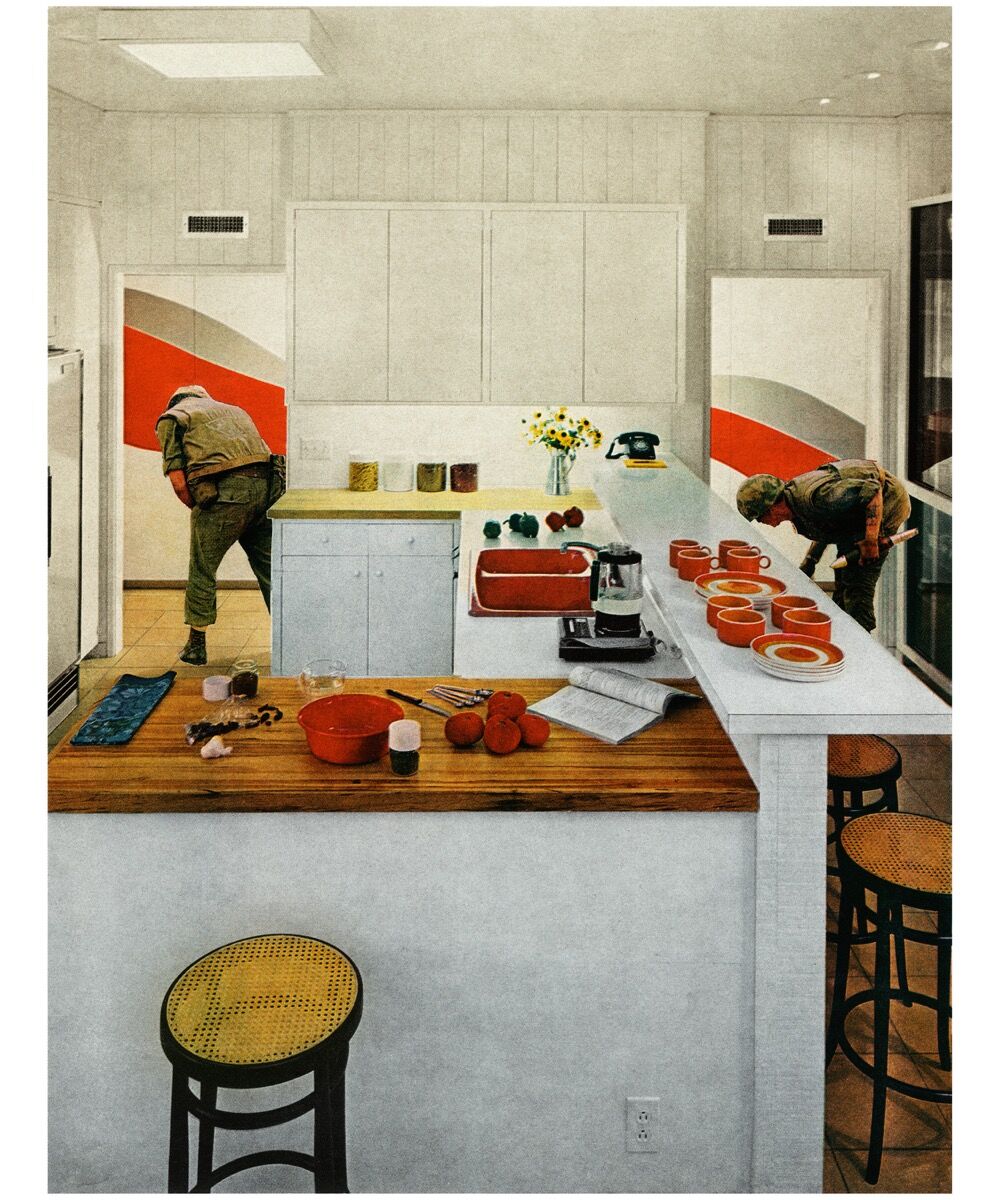 The absurdist photomontage aesthetic of Rosler and the Dadaists, once intensely provocative, has begun to seep into the mainstream—including the news media, long a target of the artists’ angst. On May 14th, the New York Times published an article that featured side-by-side photographs of violence in Gaza and elegantly clad state officials at the opening of the United States Embassy in Jerusalem. In another piece that same day, the Times juxtaposed a photo of a gas-masked man running from a fiery blaze with one of Ivanka Trump and Benjamin Netanyahu clapping. Together, the images imply that the pair are applauding the mayhem itself, not the opening of the embassy. The illustration looks like something Rosler could have made (and also recalls a particular
Eric Fischl
painting).
Another artist,
Thomas Hirschhorn
, takes Rosler’s aesthetic to an extreme with his juxtapositions of graphic war imagery (a gruesomely disemboweled man, a bloody victim on the sidewalk) with figures from fashion publications. Employing photographs too harsh for most newspapers, his exhibitions turn the gallery into a site of confrontation and potential outrage.
And the logic of radical photomontage is rampant in an everyday context, as well. In fact, it’s become a familiar media tactic (ironically, since artists such as Hirschhorn and Rosler target the very media that’s adopted their style). This week, Vice placed pictures of
David Lynch
and Donald Trump side-by-side for a piece on Lynch’s views of the president (clarification: he’s not a fan). The surreal setup juxtaposes the film director with the daftly grinning, flag-hugging, America First politician next to him. The latter looks like a readymade villain for Lynch’s next installment; Twitter had a field day, comparing Trump to Blue Velvet crook Frank Booth and Photoshopping the president’s head onto the body of one of Lynch’s most bizarre characters, Henry Spencer (from Eraserhead).
Indeed, such digital tools and social media platforms have made the photomontage readily accessible to the masses (Rosler herself is active on Facebook, reposting and disseminating writing and pictorial content outside of the usual institutional and fine art contexts). Memes, with their appropriated images and wry text, are the form’s heirs, apparently. These days, it’s often up to the internet—not just artists—to find the jarring configurations that might expose the lunacy of our times.
Alina Cohen
Related Stories

The Women of Dada, from Hannah Höch to Beatrice Wood 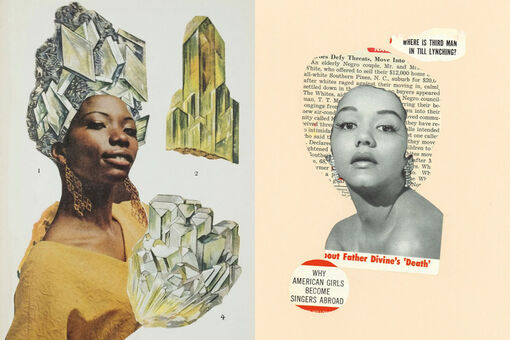 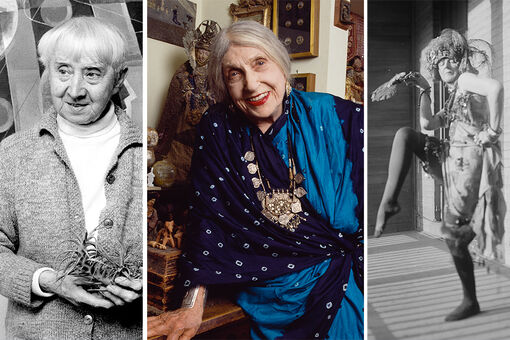 The Women of Dada, from Hannah Höch to Beatrice Wood
Meredith Mendelsohn
Aug 14, 2017