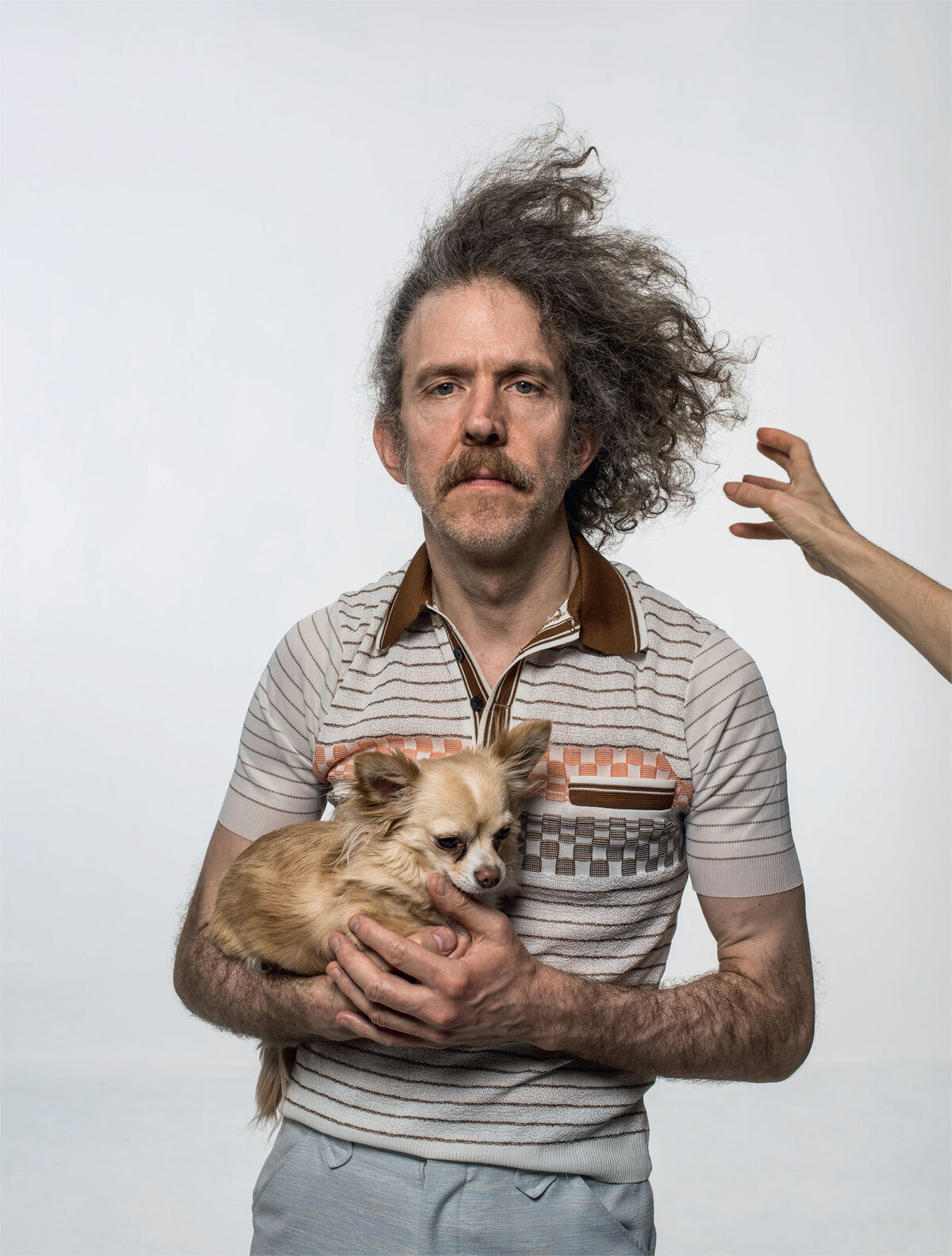 “Martin likes waiting to make decisions; it keeps you on your toes,” Tom Hunt, a director at Hauser & Wirth London, tells a group of journalists as we enter the first room of
Martin Creed
’s new show in Bruton, Somerset. As we wait for the artist, the day before the show’s opening, the gallery is alive with the bustle of technicians, press, and gallery employees. Creed soon emerges, looking sharp in a well-tailored suit worn over a bright orange jumper, holding the remains of a green juice. “I think they’re just made of grass, I’ve seen the guy mow the lawn and serve it up,” he says with a laugh, before delving into the surrounding exhibition. “I was trying not to plan this show too much,” he explains as he begins to walk us through the show. “Life is messy and moving all the time.”
Creed is in the middle of something of a moment. In addition to this show, the artist is just weeks away from a major show at the Park Avenue Armory in New York. Earlier this month he unveiled a large Public Art Fund commission in Brooklyn Bridge Park, and in July he’ll release a new music album called Thoughts Lined Up. Eschewing the term “conceptual” for “expressionist,” the British artist’s works over the years have considered the ambiguity of everyday experience, and the intermingling of art and life. Throughout his career, many of Creed’s works and exhibitions have embodied the sensibility of a live extended performance, rather than a static display. Take for example his 2006 work comprised of an automated grand piano; its top would slowly open, then quickly slam shut, and repeat. Or, his 2014 Hayward Gallery show, for which he mounted a car on the roof of the building that would regularly erupt into the sound of alarms, its doors swinging open wildly. Creed’s new shows, in Somerset and New York, continue this tradition, but in new ways.
Taking over five galleries, the exhibition at Hauser & Wirth Somerset presents an array of work including paintings, drawings, sculpture, video, and sound work derived from voice recordings. Creed is the sixth artist to undertake the Hauser & Wirth artist residency in Somerset, but he’s the first to use the experience to develop a body of work for a show on site. Over the last six weeks Creed (and his dog Jimmy) became part of the local community, living and working at The Maltings studios on Bruton’s High Street. When asked if his mode of working changed when he was outside of London (where he lives and has his studio), Creed says yes, mainly due to the fact he’s been a guest. “I’ve been well looked after; it’s quite a luxurious experience,” he admits, but notes that he didn’t want to become too comfortable. “When I’m away, life is simplified because a lot of things are taken care of, so I can live in a weird bubble.” His anxiety about this bubble, an invisible barrier between life and art, and the necessity of breaking out of it, underscores the exhibition.

“Your work is what you find that you’ve done, rather than what you think you’re doing,” he explains while walking through the space. This statement mirrors the title of the exhibition, “What You Find,” which is also a reflection of the works on view, which are filled with things that Creed has accumulated over the years. Mixed-media sculptures, such as Work No. 2710 (2016) and Work No. 2711 (2016), are made from boxes, bags, sheets of newspaper, and kitchen towels, all sourced from his flat in London’s Barbican. “It was less neatly arranged at home,” he says with a chuckle, as we move deeper into the show. Vitrines encase bouquets of dead flowers, and even a pile of Creed’s distinctive hair. Boxes from food packaging and a new printer are stacked in size order, creating towering pyramids. Three Fiat cars are parked side by side with paintings in their open boots. In the garden, a tree’s branches have been laden with brightly colored plastic bags. When asked if he’s deliberately subverted the status of the objects that many would consider rubbish, he nods. “Little things are important; I prefer the bags to the cars. I wanted to make small things into big things.”
As I speak with the artist, I notice that I’m not the only one recording our conversation; Creed is too. It’s a nod to a habit he’s developed in recent years, of creating daily voice-notes, which are also central to this show. Work No. 2694 (2016), for example, is an installation formed from multiple speakers and amplifiers emitting interweaved recordings of the artist’s voice. Creed links his approach to sound works such as this one to his experience as a musician—he has been performing live shows since 1994 and has released 10 records since 2011—where a live connection with the audience is key. “A bad gig would be one where you try and deny reality by pretending the audience isn’t there,” he says, and carries this line of thinking into the context of an art exhibition. “It’s dangerous to just put the artwork in the gallery and be totally removed from it.”
Creed’s upcoming show at the Park Avenue Armory further embodies his desire to break the boundaries between an artwork and its environment. “It is based on the fact that the gallery can be a bubble in relation to the world. I was determined to try and turn the building inside out, to try and make the work look outwards somehow,” he says of “The Back Door,” which is his largest U.S. survey show yet. “The main work is called The Back Door—I am going to open and close the back door [of the Armory], which is essentially a roller shutter at the end of the space. I’ve tried it out and it creates this amazing view of people going past in the street,” Creed explains. “If the whole room is empty and blacked out, then that light is intense—it’s like a hyperreal movie of life. That will also alternate with a new film I’ve been making of people opening and closing their mouths—I’m thinking about the inside and the outside.” Advertisement
In the final room in Somerset, Work No. 2960 (2016) is painted over the panes of the gallery windows that look out onto fields. Swathes of emulsion in a chequered pattern cover one of the walls, and a floor-to-ceiling wall piece made from alternating strips of paint and mirrored glass lines the other. “The separation of the author and the audience is artificial,” Creed notes, when asked about his all-encompassing use of the gallery space. “The world isn’t like that. We’re all mixed up. That’s why I’ve made works in the past that use the whole room, like with the balloons.” He’s referencing one of his older installation works, Half the air in a given space (1998–ongoing), which has been exhibited in various iterations over the years.
For the series of large-scale acrylic drip paintings in bright colors, seen alongside the three Fiats, Creed called upon the gallery staff, Bruton’s councillors, and a local youth group to play the role of artist. He notes that collaborating with others on the paintings was an attempt to remove his own hand and relinquish a degree of control. “I’m scared of living in a fantasy world; I’m trying to keep a grip on reality,” he says with a laugh. While the paintings were prepared and completed in a controlled environment, Creed intended for something spontaneous and free to emerge. The other paintings on view are made by Creed, but he established for himself a set of rules to follow in order to make them. One work is made from multiple brands of black paint, foregrounding the contrasts; another is created from throwing paint at the canvas from over his shoulder. A series of paintings of people, such as Work No. 2228 Portrait of Maria Callas (2015) or Work No. 2181 Portrait of Antonio Banderas (2015), are made inspired by a photograph that he cannot see but is described to him.
The video for Creed’s new single “Understanding,” taken from his forthcoming album, is also installed in the show. In it, the artist appears in multiple guises, each time wearing a different outfit and with a new hairstyle. These versions are layered on top of each other to create a dizzying and entertaining montage. “Trying to choose trousers is just as difficult as trying to choose colors for a painting,” he says of the video. The single “Understanding”—with lyrics like “I’m a victim. No, I’m a victim. I’m affected. No, I’m affected” and “I’m understanding. I’m listening”—is about an argument. Understanding is also the title and the message of Creed’s 25-foot-tall rotating neon sculpture at Brooklyn Bridge Park. “The sign in the park is far more overt; it’s in view of Ground Zero. It’s not a matter of ‘love’ or ‘peace’ because there is always going to be conflict, and you’re always going to hate people… you can hate people but you don’t have to kill them.”

Stills from Martin Creed, Work No. 2656, Understanding, 2016. © Martin Creed. Courtesy of the artist and Hauser & Wirth.

Amid a heated political climate, Creed’s perception of current events have seeped into his recent works. “These little colors on the wall are part of a world where people are dying and I don’t want to deny that,” he notes, emphasizing the importance of recognizing salient political issues. For example, in response to the refugee crisis, Creed created two new songs with accompanying video works, Work No. 2533 Border Control (2015) and Work No. 2530 Let Them In (2015), that have been installed in small booths. “I started thinking about the difficulty of drawing lines on a map, making country borders, which is exactly the same as drawing on a piece of paper. Any definite border is against nature and against life. Life is a blobby mess. Everyone should be able to move around freely.” Debates around border control inspired him to incorporate the glass wall he used to contain balloons at The Hayward in 2014 into the current show. “I thought because of the border control thing, it might be nice to have a glass screen,” he explains. “It’s like in passport control, where you have to go through some weird tunnel.”
“I’m not trying to provoke anything specific,” he emphasizes, when asked if he is specifically trying to challenge the viewer’s perception of art or life. “I don’t know what I want from other people, I just try to do things that I find exciting. I hope that there is something in it for others.” The spontaneity in his work, its productive embrace of everyday disorder, is an accessible antidote to an often impenetrable art world. Creed beckons us to burst the bubble, and see what we might find.
Philomena Epps
“Martin Creed: What You Find” is on view at Hauser & Wirth Somerset, May 22–Sep. 11, 2016.
“The Back Door” is on view at the Park Avenue Armory, New York, Jun. 8–Aug. 7 2016.
Related Stories