From Matisse to Turrell, 8 Artists Who Designed Transcendent Chapels

Alexandra Alexa
Apr 10, 2017 2:26pm
Artists have a long history of designing spiritual and religious spaces.
Michelangelo
put his finishing touches on the sprawling ceiling of the Sistine Chapel in 1512, but countless others had created art to transform sacred spaces well before him. Take
Giotto
(c. 1267–1337) for example, who created frescoes, altarpieces, and panel paintings that adorn churches throughout Italy, and is credited, among other things, with demonstrating the potential for storytelling through religious art.
In more recent times, modern and contemporary artists have actively continued that tradition, creating stained-glass windows, murals, altarpieces, and in some cases, entire structures with religious or non-denominational spiritual intent. And in doing so, they’ve transformed the experience of being in a sacred space.
Pablo Picasso
, for example, famously produced two huge murals (War and Peace, both 1952) for the Chapel of the Château de Vallauris, which has since become a museum dedicated to his work. And film director Jean Cocteau (known for Orpheus and Beauty and the Beast) contributed several graphic murals to churches, including the Notre Dame de France in London in 1959 and Chapelle Saint-Pierre in Villefranche-sur-Mer, France, in 1957.
Below, we share the stories behind eight notable artist-designed chapels—encompassing works of art that redefine spirituality in the artist’s terms, and foster moments of contemplation, introspection, and perception. 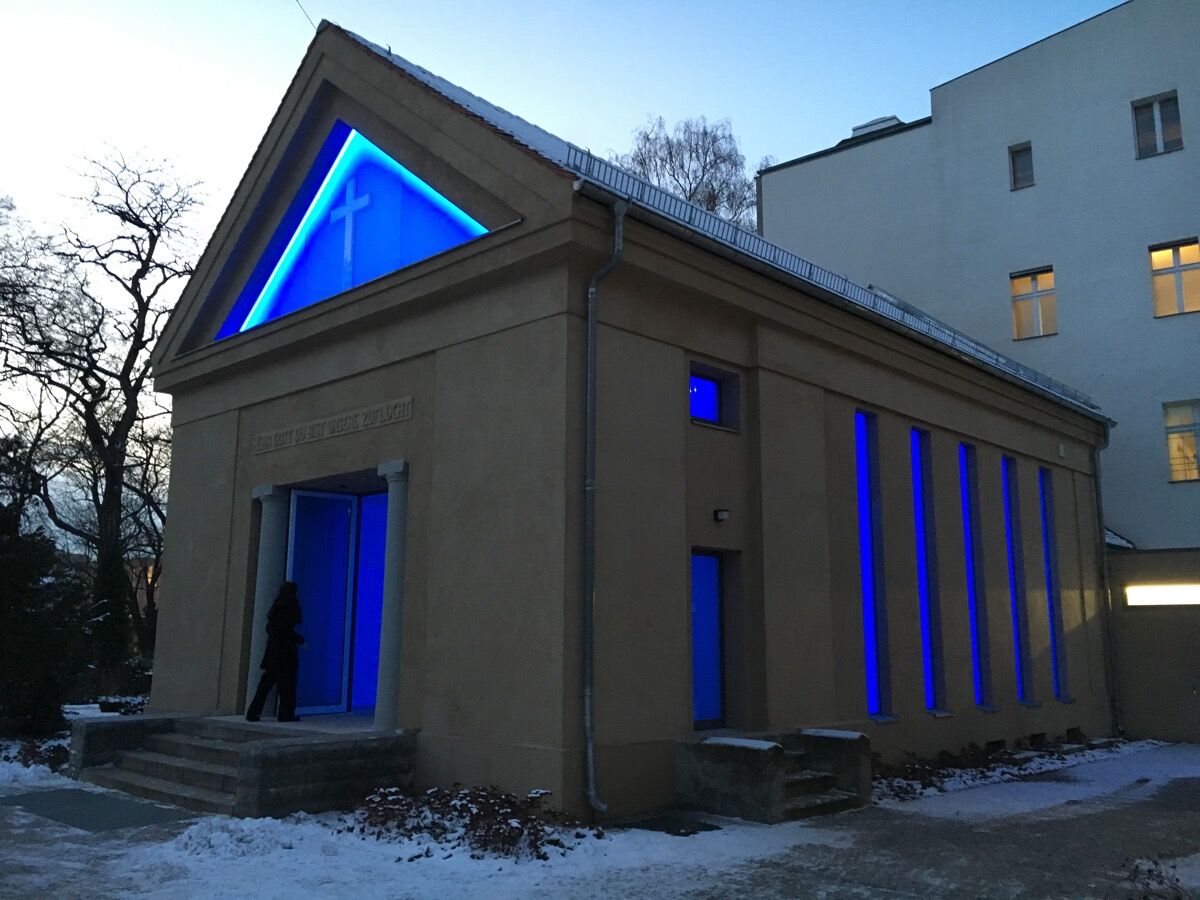 5 Images
View Slideshow
In late 2016,
Turrell
took over the memorial chapel of the Dorotheenstadt Cemetery in Berlin with one of his signature light installations. The project was an immersive light show timed with sunset each day. Hidden LED lights filled the space with deep blue light as the sun started to set, then changed color every two minutes according to a pre-programmed pattern, from blue to magenta. The entire space was suffused in the changing hues, through which Turrell aimed to connect the natural world with the spiritual one. As the fading sunlight filtered through the chapel’s opaque windows, it would appear amber when the chapel was lit in blue, and green when it was magenta.
The installation was a continuation of Turrell’s longtime concerns with space and light, particularly as they relate to spiritual sites. As a Quaker, Turrell has outfitted many Meeting Houses with his skylights—apertures that open these contemplative spaces and allow light to flood in. Advertisement
The
Rothko
Chapel was founded and conceived by Dominique and John de Menil as an interfaith sanctuary integrating art, architecture, and the spiritual. The de Menils commissioned Rothko to fill the space, designed by
Philip Johnson
, with his paintings. He created 14 massive canvases in deep purple and black hues (Rothko would say that bright colors limit your vision to the canvas, while dark colors allow the viewer to glimpse beyond the canvas and toward the infinite). These paintings line the windowless, octagonal chapel and impart it with the sober, meditative atmosphere it has become known for. Outside, at the south entrance of the chapel,
Barnett Newman
’s steel sculpture, Broken Obelisk (1969), stands in a pool of water. The 25-foot tall inverted obelisk has been interpreted by many as a universal monument for all.
When the chapel first opened in 1971 (Rothko never saw the completed work; he died in 1970), Dominique de Menil emphasized that the Rothko Chapel was not intended to be an imposing, traditional religious space, but rather a space for turning inward. “It offers a place where common orientation could be found—an orientation towards God, named or unnamed, an orientation towards the highest aspirations of Man and the most intimate calls of the conscience,” she said. 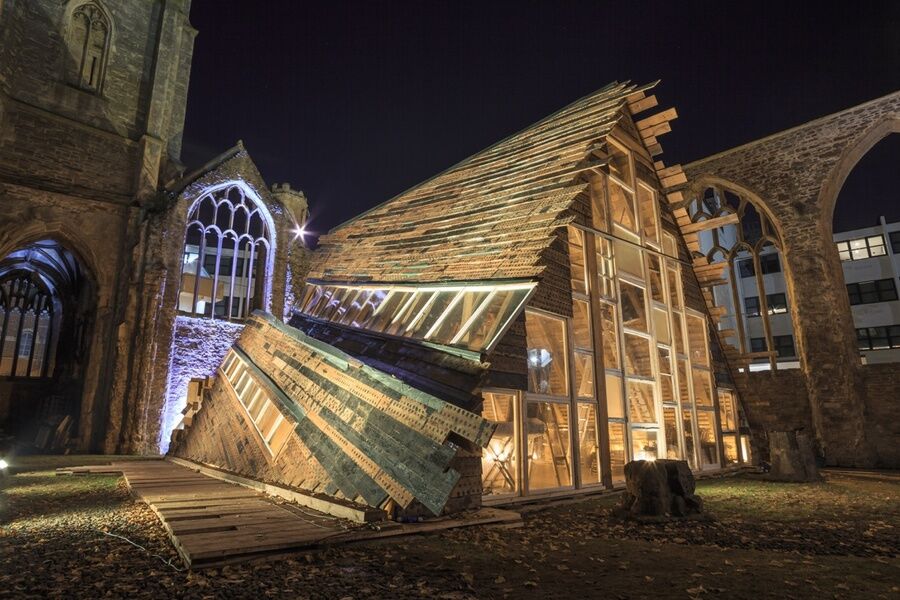 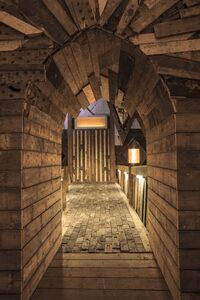 3 Images
View Slideshow
Sound and community were the vehicles of spirituality for
Gates
’s first U.K.-based installation, Sanctum (2015). The site of this intervention was the medieval Temple Church in Bristol, originally designed by the Knights Templar, which had been bombed out during World War II in 1940, leaving only a shell of the building behind. Gates used salvaged material from nearby sites to create a structure inside the hollow walls of the former church, including doors from a former chocolate factory and bricks from demolished houses.
The space housed an ambitious 522-hour-long program of non-stop performance, featuring local musicians and DJ’s, spoken-word poetry and gospel choirs as well as artists who were just visiting the city temporarily. “This project was attempting to make space inside of a sacred space that people might connect with another,” Gates noted at the opening. “Sanctum is primarily a platform on which the people of Bristol have an opportunity to hear each other.” 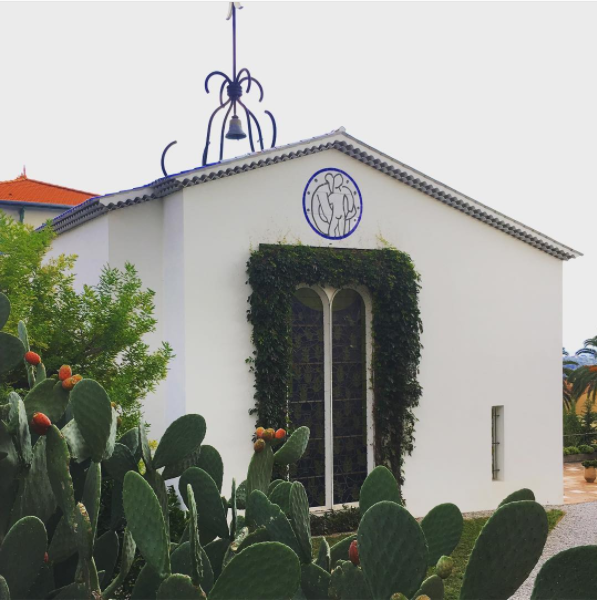 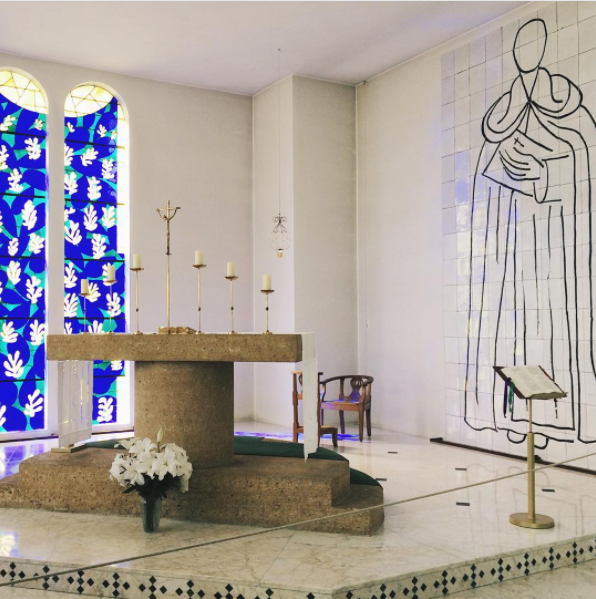 In 1941,
Matisse
put an advertisement in a newspaper looking for a young, attractive night nurse to help him in his recovery from intestinal cancer (which he never fully recovered from). Monique Bourgeois, a nursing student, became the artist’s aid and helped him continue working and develop his now famous cut-out works, despite being confined to bedrest.
Later, in 1946, when Bourgeois was in the process of becoming a Dominican nun (she became Sister Jacques-Marie), she called on Matisse to help her design a chapel for her sisterhood in the hills of Vence, France. Matisse, who had been born Catholic but was an atheist, was more interested in spirituality than religion, and he proceeded to design a space inspired by natural forms and vibrant color. “I think it is better to pray in beauty,” he would say.
Despite the severity of his illness—at this point, he could barely stand—Matisse worked on the chapel for the next four years, until it was opened in 1951. He had his hands in nearly every area of the design—from the building itself to the cut-out-inspired stained glass windows, mosaics of the Stations of the Cross, candlesticks shaped like anemone flowers, and even the vestments that the priests would wear.
For Matisse, the project was a culmination of his life’s work. “This work required me four years of an exclusive and entiring effort and it is the fruit of my whole working life,” he once said. “In spite of all its imperfections I consider it as my masterpiece.” 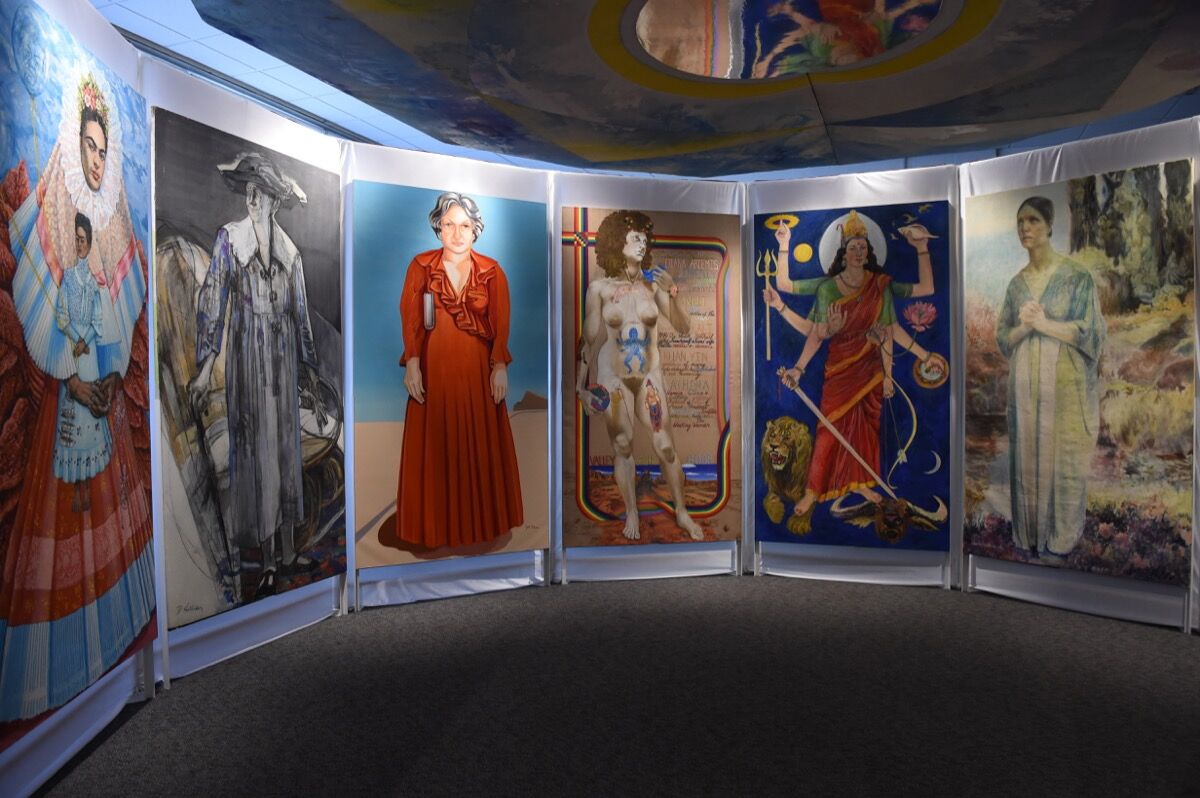 4 Images
View Slideshow
In the 1970s, while Greenstein was looking at Michelangelo’s infamous Sistine Chapel, she noticed a glaring issue: “Where was woman in man’s relationship to God? God and Adam touching hands—almost. Where was Eve?” Greenstein was inspired to create an alternative chapel, made by women, for women. “I decided that I would challenge the Michelangelo concept; I would retell the myth of creation.”
Over the next few years, she collaborated with a wide range of female artists and in 1978 she opened The Sister Chapel at PS1 in Queens. Her work featured 11 larger-than-life portraits of heroic female role models selected by each of the contributing artists—June Blum painted Betty Friedan,
Alice Neel
painted Bella Abzug, Elsa Goldsmith painted Joan of Arc. Greenstein—who had been raised an Orthodox Jew—painted an abstract ceiling panel in a spectrum from yellow to violet, “sunrise to sunset as a metaphor for the seasons of a woman's life,” as she described it. She included a reflective silver circle in the center of the 18-foot diameter “dome,” to stand in as a symbolic mirror: a woman seeing herself “reflected in it as a potential candidate for the women’s hall of fame.” 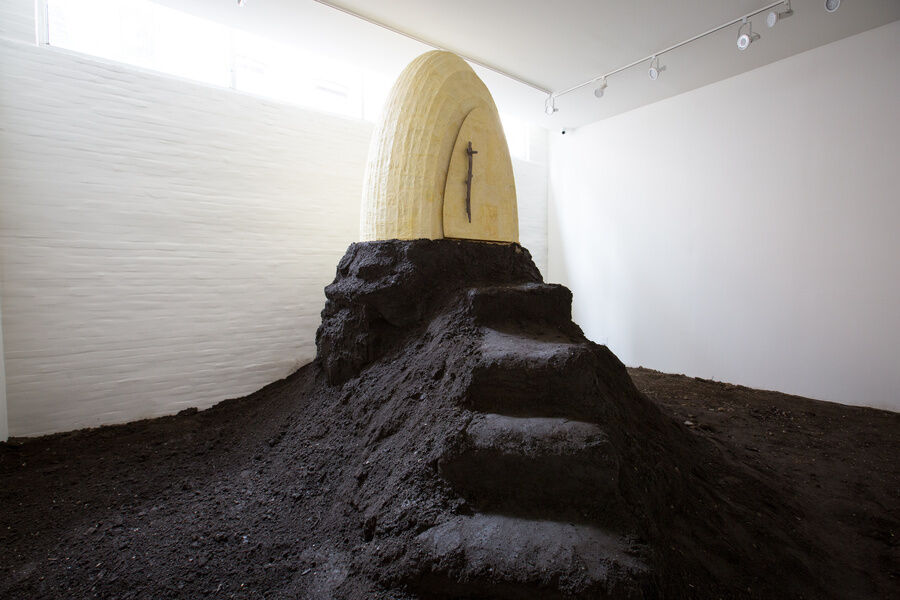 Installation view of Terence Koh, Been Chapel, 2016. Photo by Olya Vysotskaya. Courtesy of the artist and Andrew Edlin Gallery.

In 2014, Canadian artist
Koh
left the New York City art world behind and moved to the Catskills. “What can you do sitting on a mountaintop as an artist, as a human being, as a person that’s conscious about what’s happening today?” he asked upon arriving at his new home. Inspired by the writings of Indian philosopher Krishnamurti, who taught that to change society you must first start on a small scale, with the single self, Koh and his partner decided to build a “bee chapel” between two apple trees. Essentially, the structure was a large-scale hive able to fit a single person at a time, and bring them in close communion with the bees—a seldom experienced proximity.
To share the experience with others, Koh debuted a version of his bee chapel at Andrew Edlin Gallery in New York in 2016. He created seven spaces within the gallery, each corresponding to one of the the seven days of the week. The rooms were covered in raw earth and lined with a layer of metal mesh that separated bees from humans. From this immersed vantage point, viewers could watch the bees’ constant activity, while being reminded of their precarious condition in the environment with the ongoing threat of colony collapse. By drawing attention to the fragility of nature and our place within it, Koh created a space with both spiritual and political undertones.
Sound was an important sensory element of the show. Not only was the bees’ perpetual humming mic-ed to amplify their presence, the gallery also included a sound recording of two black holes colliding a billion light years away. From the smallest scale to the largest, Koh’s work suggested that we are all “living in a vibration.” 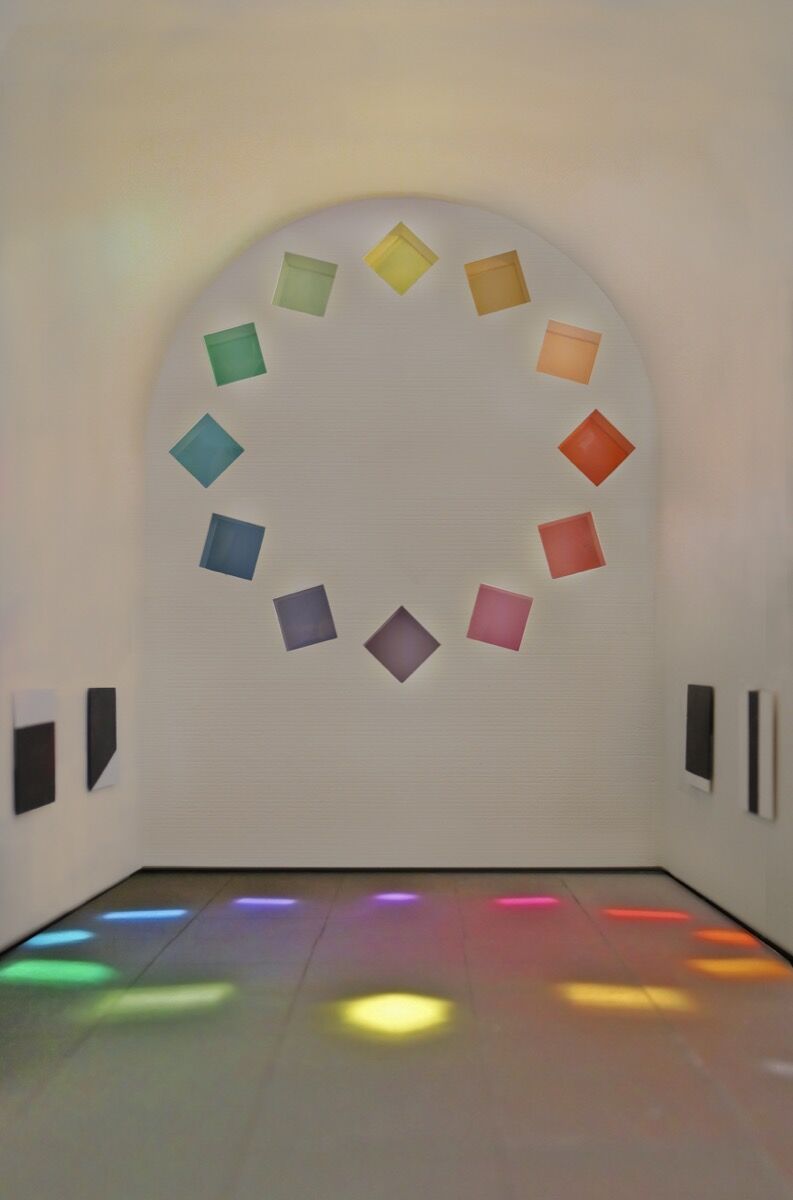 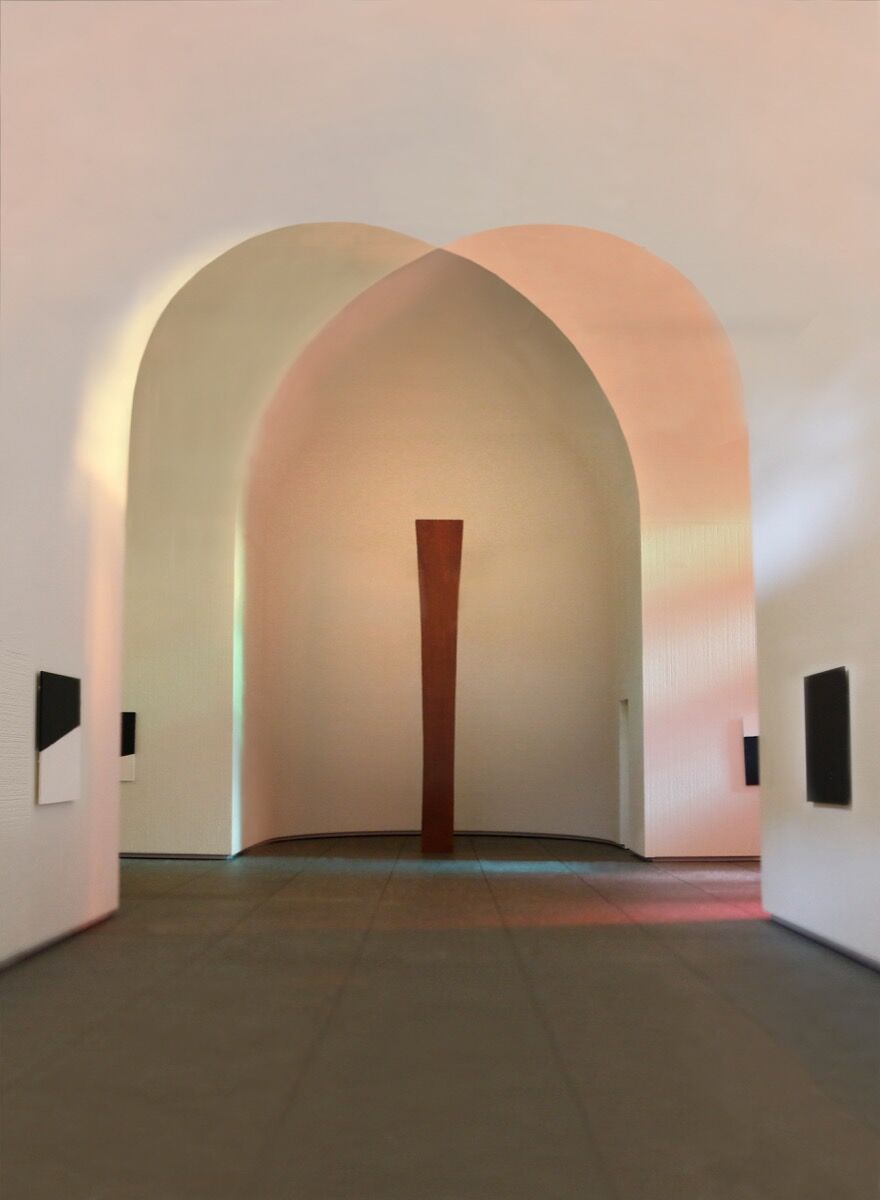 Though he never referred to it as an explicitly religious space,
Kelly
’s Austin installation—a 2,715-square-foot stone building—has garnered comparisons to the Rothko Chapel since it was announced in 2015 that it would be built on the grounds of the Blanton Museum of Art in Austin, Texas.
Kelly designed the structure in 1986 for a private collector and was inspired by the
Romanesque
and
Byzantine
architecture he encountered in Paris as a student. Though it is the only free-standing structure in his oeuvre, his characteristic approach to color, light, and shaped canvas is evident in the building’s stained-glass windows. The chapel is intended to be an open public space for contemplation. “I conceived this project without a religious program. I hope visitors will experience Austin as a place of calm and light.” Construction for the project broke ground in October 2015—just two months before Kelly’s death at the age of 92—and is expected to open to the public in early 2018.

Louise Nevelson, The Chapel Of The Good Shepherd, 1975 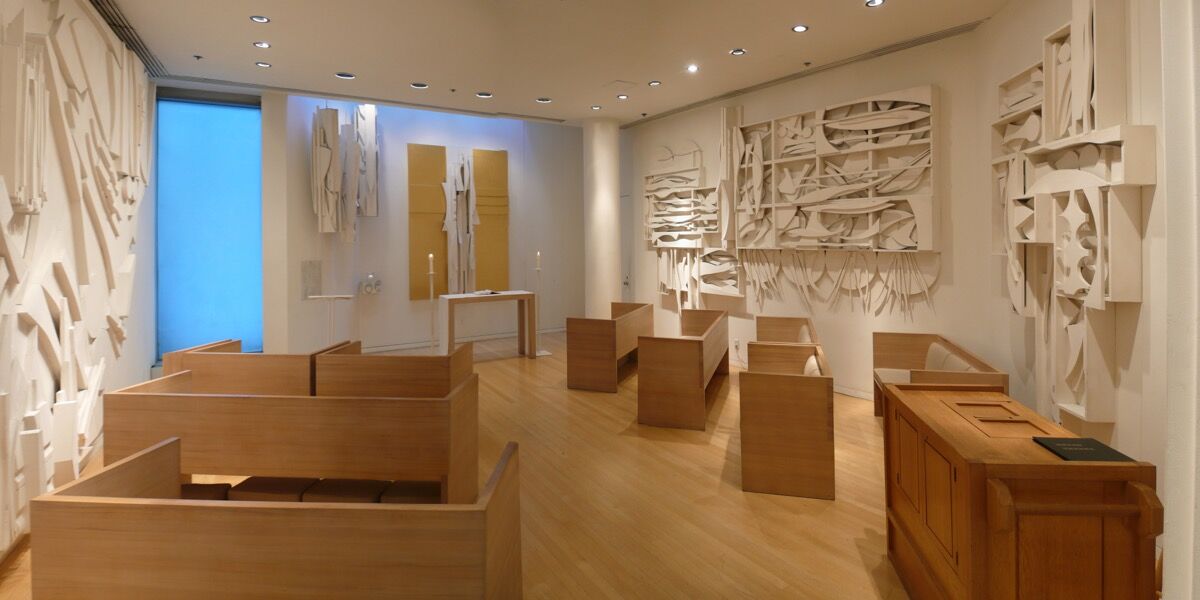 For American sculptor
Nevelson
, spirituality was closely linked with creativity. When she was commissioned to design the Chapel of the Good Shepherd within
Massimo and Lella Vignelli
’s Saint Peter’s Church in Midtown Manhattan, she saw it as an opportunity to create a complete sculptural environment, in the language of her abstract, layered wall-mounted works.
Nevelson intended the space to be abstract enough to be universal, for people of all denominations to experience a sense of peace and joy. The result was an intimate room measuring only 28 by 21 feet, washed in pale tones. She translated religious iconography into complex sculptural works made of wood and painted it white—the only color elements in the room are the altar, which is gilded in gold, and the pews, made of pale ash wood. “My focus is a celebration of the contemplative in a space that is not defined by walls or time, but only the limitation of the spirit itself,” she explained.
Alexandra Alexa
Related Stories 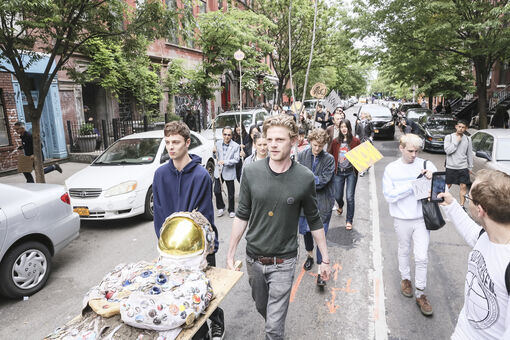 Terence Koh Stages a Bold Return to the Art World—and a Chapel for Bees
Artsy Editors
May 26, 2016