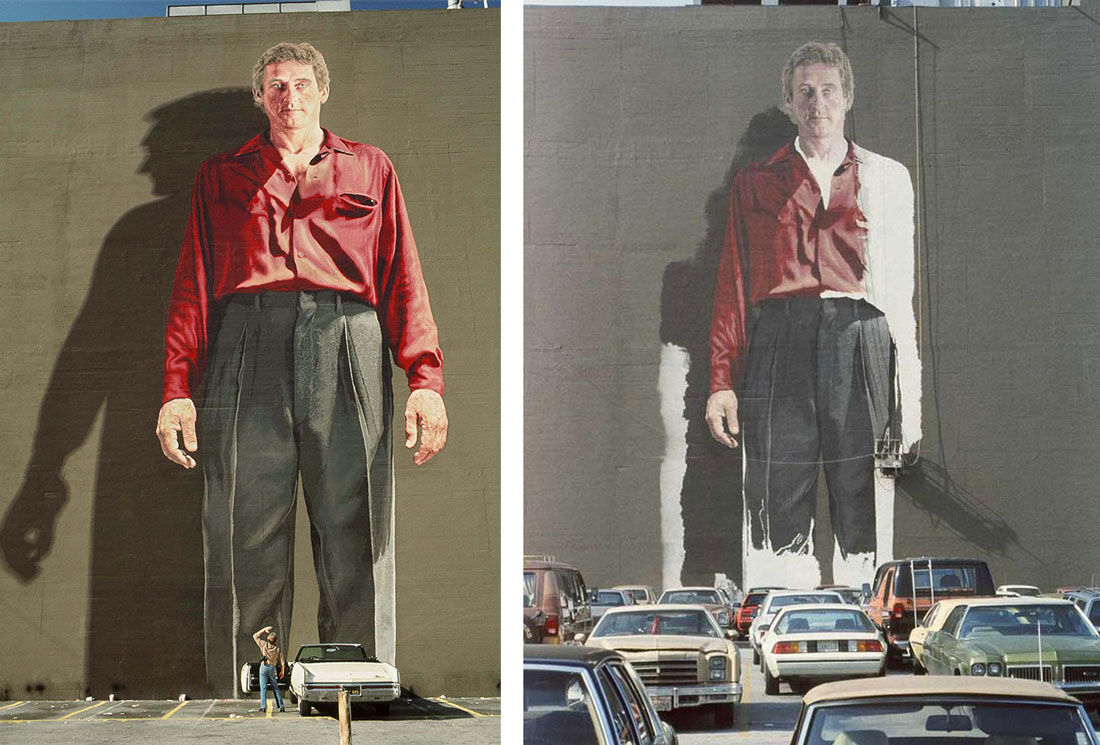 In late 2006, art conservator Scott Haskins received a call from the federal government. They were on the hunt for an expert witness, experienced in mural restoration, to provide testimony in an increasingly heated legal battle. Several months prior, in June, a beloved Downtown Los Angeles mural, painted by Kent Twitchell, was whitewashed—to the artist’s and the surrounding community’s surprise. The six-story, 70-foot-tall depiction of famed L.A. painter
Ed Ruscha
had been methodically composed by Twitchell over a span of nine years, between 1978 and 1987, with money from his own pocket.
Twitchell told me that he first heard of the whitewashing on June 6, 2006, while in Northern California readying for his daughter’s wedding. Earlier that day, a friend had serendipitously passed the mural, only to find it mid-erasure. Twitchell immediately called a lawyer friend, Les Weinstein, who took up the case. The overpainting, it turned out, was in direct violation of the Visual Artists Rights Act (VARA), under which, by law, artists must be notified 90 days prior to a mural’s removal. Shortly thereafter, Twitchell sued the Department of Labor, who owned the building, along with other involved parties for $5.5 million. To this day, no one organization or individual has taken responsibility for giving the order to paint over the mural.
Soon after, Haskins, who had become known for his magical mural restoration efforts around the city, was brought in by the government—against the artist—to assess the facts. Could the overpainting be cleaned off? Could the mural be restored back to its original condition? And, most daringly, could the mural be taken off the wall? So, Haskins began a series of tests on the wall where, somewhere beneath a thick layer of grayish-white paint, Twitchell’s Monument to Ed Ruscha rested. It turned out that the answer to each of the government’s questions was “yes.” “So I cut out a piece of the mural, peeled it off the wall, and mailed it to them,” remembers Haskins, with a somewhat cheeky tone. Haskins’s assessment of the mural, and the costs required to restore and move it, would go on to inform a precedent-setting $1.1 million settlement in favor of Twitchell—at the time, touted as VARA’s biggest win in California yet.

Haskins, a gregarious man with bright blue eyes and a flair for storytelling, conserved his first outdoor mural in 1975—a badly damaged, bat guano-swathed fresco on the walls of a northern Italian monastery. The painting dated back to 1395. “My intervention was the first scientific investigation of the mural, and the first attempt to decide what its long-term look would be. You can imagine some of the problems that occur when you’ve got 1,000 years of wall painting, in lots of different layers, all on top of each other. Which ones do you keep? How do you decide which ones to preserve? Many times, the answer is not just scientific. Just like murals today, sometimes preserving murals, even from back then, is a political question.”
Since then, Haskins has shifted his focus to the conservation of younger murals because, “Well, obviously, I can’t work on 500-year-old murals anymore—I’m in the United States,” he explains, with his usual candor. Indeed, many of the outdoor paintings that now come his way—whether they’re faded by the sun, marred by vandalism, shaken loose by earthquakes, or painted over by construction crews—come with a heavy dose of emotion, politics, and legal struggles. It’s a cocktail that’s somewhat unique to public art. “Murals usually have a fair amount of community support,” Haskins explains. “People live with them, people identify with them.” They also band together to save them.
When I first spoke with Haskins, he was on the road—as he often is—driving back to L.A. from Las Vegas, where, at the request of the city, he was inspecting an at-risk mural. “Vegas is a harsh environment, as you might expect. A wall, in the summertime, can reach 200 degrees, and this one was just getting blasted to smithereens with light and all the rest of it,” he explains. On site, Haskins investigated the durability of the mural’s surface, how much in-painting would be required to restore the painting to its original brilliance, and which materials would protect it from future damage. After, he delivered a list of next steps, along with their various price tags, to the city’s arts commissioner. “Now she has to take all those options and figure out what’s possible within the city’s budget,” explains Haskins. “If the city hadn’t heard from so many people about wanting to preserve the mural, they probably would have just let it go, but the community loves it.”

Advertisement
Back in L.A., Haskins has become the go-to street art savior—he’s worked what some might call miracles. In 2011, he and the Mural Conservancy of Los Angeles (MCLA), founded by Twitchell and fellow artist Bill Lasarow, began a behemoth effort to conserve a series of 13 murals painted along L.A. freeways in celebration of the 1984 Summer Olympics. Over the years, they’d been covered with graffiti tags and acts of vandalism, which, in turn, had been covered in gray paint by Caltrans, a state organization responsible for highway maintenance—and required to remove any graffiti tags in public spaces. By 2011, Caltrans had shrouded the majority of the 13 murals.
In response to the overpainting, legal action was initiated by multiple artists who created the murals, and Haskins was again brought in as an expert witness. While several of the murals had been destroyed (by the elements and highway construction, according to the Los Angeles Times), Haskins determined that the remaining murals could be saved and developed a methodology to uncover them. “By proving that the murals weren’t obliterated for eternity, that they could be returned to their original state, it diffused the lawsuits. The case never went to court, and everybody was happy,” Haskins recalls. Today, six of the Olympic freeway murals have been restored to their original state—freed from their gray veneer and the spray-paint vandalism (a term now used to distinguish, in Haskins’s words, “destructive and antisocial acts from the fantastic art out there that’s been painted with spray cans”) beneath.
But sometimes Haskins’s efforts, and those of the MCLA and other arts activists, can only go so far. Today, years after Twitchell was awarded $1.1 million in his settlement with the city, his Monument to Ed Ruscha is still covered. “We would have had to sue for more money to have restored something that huge,” explains Twitchell. Large-scale mural restoration projects, which require extensive expertise, expensive equipment, multi-person teams, thorough testing, and sometimes years of work, are not cheap. Haskins notes that costs fall on a very wide range: He’s quoted public art restoration projects from as little as $1,000, for lower-touch, smaller-scale jobs, to as much as $3 million for the most labor-intensive projects. “But the thing is, even if we had spent everything and come up with more money to restore it to its original form, all they [the city] have to do, to cover it legally again, is give me three months notice at any time,” laments Twitchell. 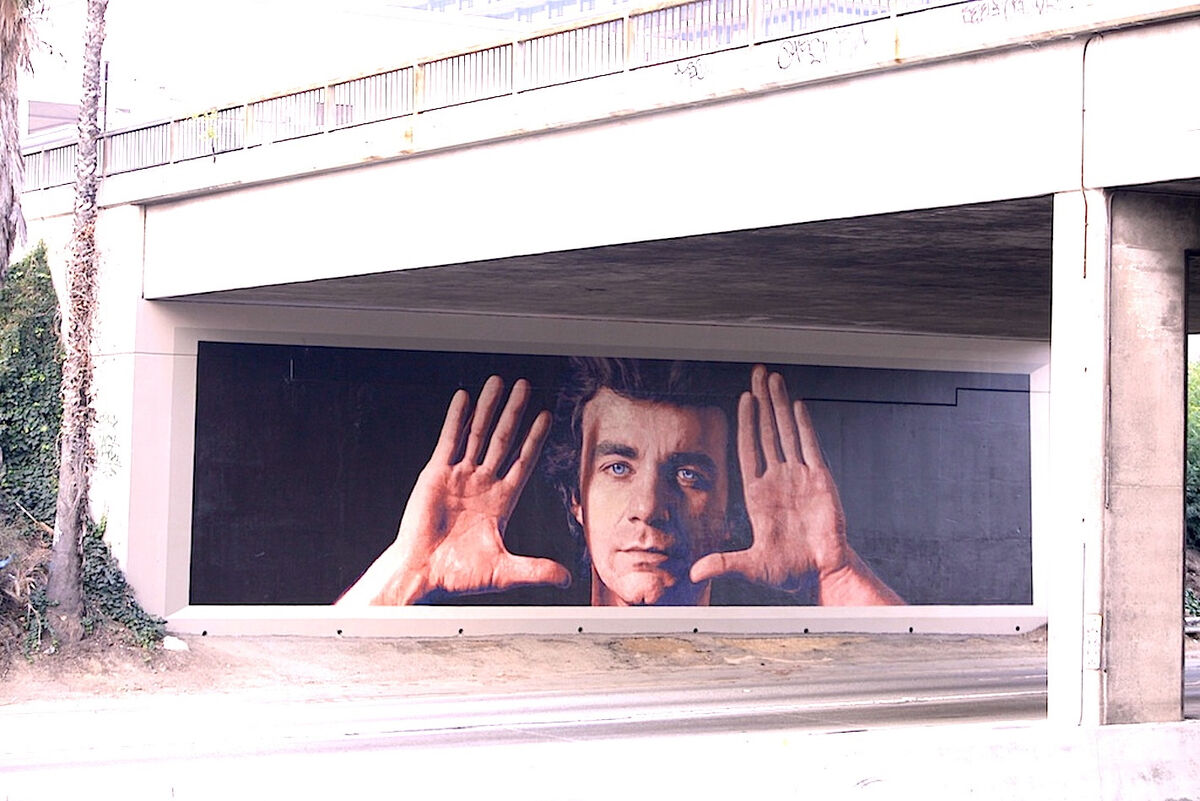 Twitchell’s mural after restorations were completed. Photo by Gil Ortiz.

This is perhaps the most controversial aspect of VARA. Even when artists are notified of plans to paint over their murals, the 90-day window often doesn’t offer enough time to come up with the money for preservation and attendant legal fees. The MCLA, for their part, finds funding wherever they can. “We’re mostly privately funded—sometimes a bank will give us money to restore a mural, or sometimes we’ll get a grant from somewhere,” explains Twitchell. “The government is required to paint over spray paint vandalism all the time; they could put some of that money towards those of us who want to use it to restore public art, whether it be sculpture or murals or mosaics. We have to scrape up our own money as if we’re doing it for ourselves—but we’re doing it for the community.”
Despite the limitations of VARA and the challenges that graffiti mural removal efforts raise, artists like Twitchell, and conservators like Haskins, push on. Twitchell is in the process of putting the finishing touches on plans to revive his Ed Ruscha monument, on the side of Downtown L.A.’s historic American Hotel. This time, Ruscha will be depicted at his current age, 78, and propped jauntily on his elbows. “I always wanted to recreate it,” explains Twitchell. “Next month, if you’re Downtown, you’ll be able to see his head—this time, it will be 12 feet high by nine feet wide.” A monument indeed.
Alexxa Gotthardt
Related Stories

A Law Meant to Protect American Artworks from Destruction Is Failing