“We owe her a lot,” says the gallerist Salman Matinfar of Farah Pahlavi, Iran’s former empress who patronized the country’s art scene during her 19-year reign, which ended with the onset of the Islamic Revolution in 1979. The seeds that the “Queen of Culture” planted in Iran’s artistic infrastructure decades ago are now being reaped by a younger crop of Iranians keen on both taking pride in, and promoting, their country’s artistic output. Despite the country’s relative isolation from the western world, these cultural protagonists have been setting up foundations, curating exhibitions abroad, publishing books, participating at international art fairs, and setting up progressive galleries in Tehran.
This Generation X of the country’s cultural scene are both Tehranians and those in diaspora; the common denominator they share is a fierce pride in their country’s rich heritage and history, and also its contemporary practices. “The reason I got so attached and motivated is because I have not lived in Iran and feel more of a need to reconnect. I think post the Islamic Revolution, Iran has not been correctly portrayed in the media,” says Dina Nasser-Khadivi, a Geneva-based consultant and curator, who just published a comprehensive Skira monograph of Iranian
pop artist
Farhad Moshiri
. “The arts have helped me reconnect.”
For many thirty-something Iranians, the Tehran Museum of Contemporary Art (TMoCA), established by Pahlavi in 1977 to both institutionally serve Iranian art as well as present Western art, was an education in itself. “TMoCA is for all of us; we all passed through it. Its collection impresses anyone. It’s like a treasure in an abandoned place,” says Hamid Reza Pejman, founder of the Pejman Foundation, established in 2015. “I think many of us became collectors because of TMoCA.” 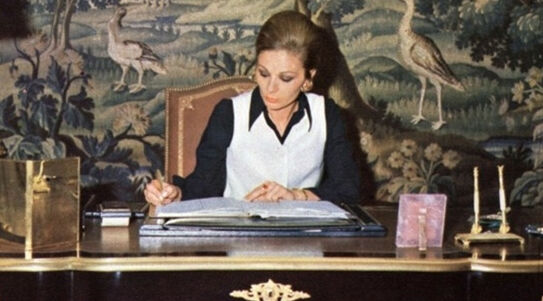 Farah Pahlavi, former empress of Iran, at work at her desk in the 1970s. Photo via Wikimedia Commons.

This looking to the past as a means of understanding the present is also apparent in the programming of Dastan’s Basement, a young gallery founded by Hormoz Hematian. “We take a theme and look at how younger artists are working on it. Say animation, for example. Eventually, these artists may show alongside a master like
Ardeshir Mohassess
,” says Hematian, who after several years studying engineering in the U.S. and Canada decided to establish a gallery in Tehran in 2012. “I wanted a space to incorporate history and art, a space where we could think about ideas and show them in the form of art.” Last fall, he opened Dastan +2, a gallery that presents the work of established artists, such as
Fereydoun Ave
, whose April show drew in over 1,000 visitors during its vernissage.
“While I was in North America, I kept trying to change the perception of Iran. I found that I don’t want to show people how interesting Iran is. Iran is interesting. I don’t want to prove anything to anyone, I want to enjoy and learn from it,” he says. “We are becoming more attuned to our identity. I saw a very young dynamic group of people who are thinking globally.”
Fellow gallerist Matinfar echoes this sentiment. “I always wanted to do something in Tehran as someone who spent my youth here, and I could see the gaps,” he says. “For example, some Iranian artists in the diaspora have never seen Iran. We also have cliques: Art professors at university produced 10 mini versions of themselves, so the art scene was falling into the trap of repeating itself.” Born and raised in Tehran, Matinfar dabbled in the tourism sector in Dubai before relocating to Toronto with his architect wife Azadeh Zaferani in 2011. “Canada was a fresh start and I wanted to follow my passion,” he says. The couple had begun amassing a collection of Iranian art, which, says Zafferani, “kept us in touch with Iran.”

Advertisement
In 2014, Matinfar, a fine art graduate of Tehran University, founded Ab-Anbar, one of the Iranian capital’s progressive art spaces. Its current exhibition, “Mass Individualism: A Form of Multitude,” is outstanding. Curated by Zaferani, the show features artists such as
Y.Z. Kami
,
Shirazeh Houshiary
,
Timo Nasseri
, and
Babak Golkar
. Like other young gallerists, Matinfar acknowledges the spending power and growing collector base of young Iranians. He waits, like others in Iran, for the full benefits of recently lifted sanctions to come to fruition. “We did feel the effect of the sanctions being lifted: we have a work from Gagosian here,” he says. (Lisson Gallery also lent a work to the show, both galleries dipping their toes back into Iran following last year’s nuclear deal.) Mantinfar goes on to note a greater number of collectors and curators from all over the world visiting Iran in recent months. “They’re observing, and so far, we have been approached by people in Jeddah, Dubai, and London,” he says.
This isn’t the Iranian art hype that swept the region and world about a decade ago. This is grounded and strategic, steered by a determined group of proud Persians. Meanwhile, Pahlavi keeps a close watch on her compatriots. “Well done, you’re doing great, keep working hard,” the former empress says to Iran’s emerging artists and those helping them regain their footing globally. “I admire you and wish you a lot of success for the future.”
Myrna Ayad
Related Stories