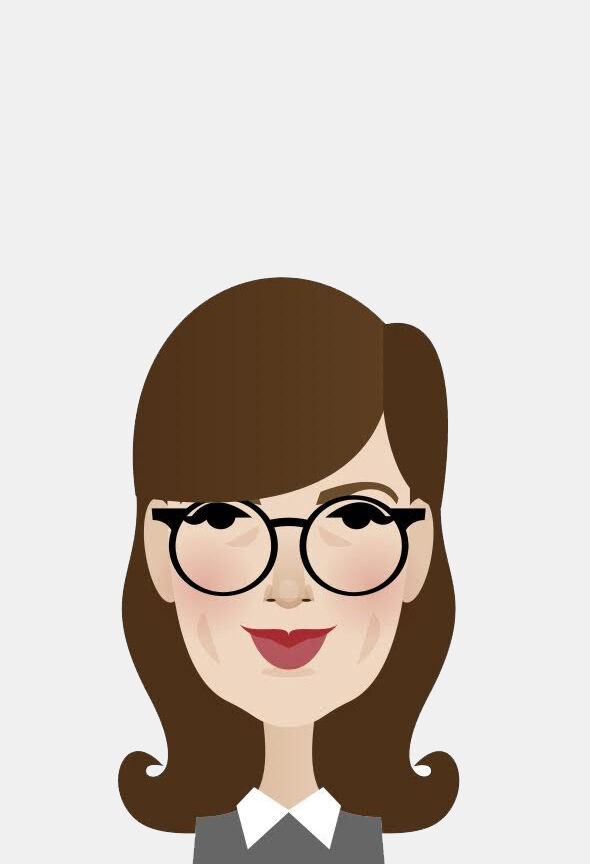 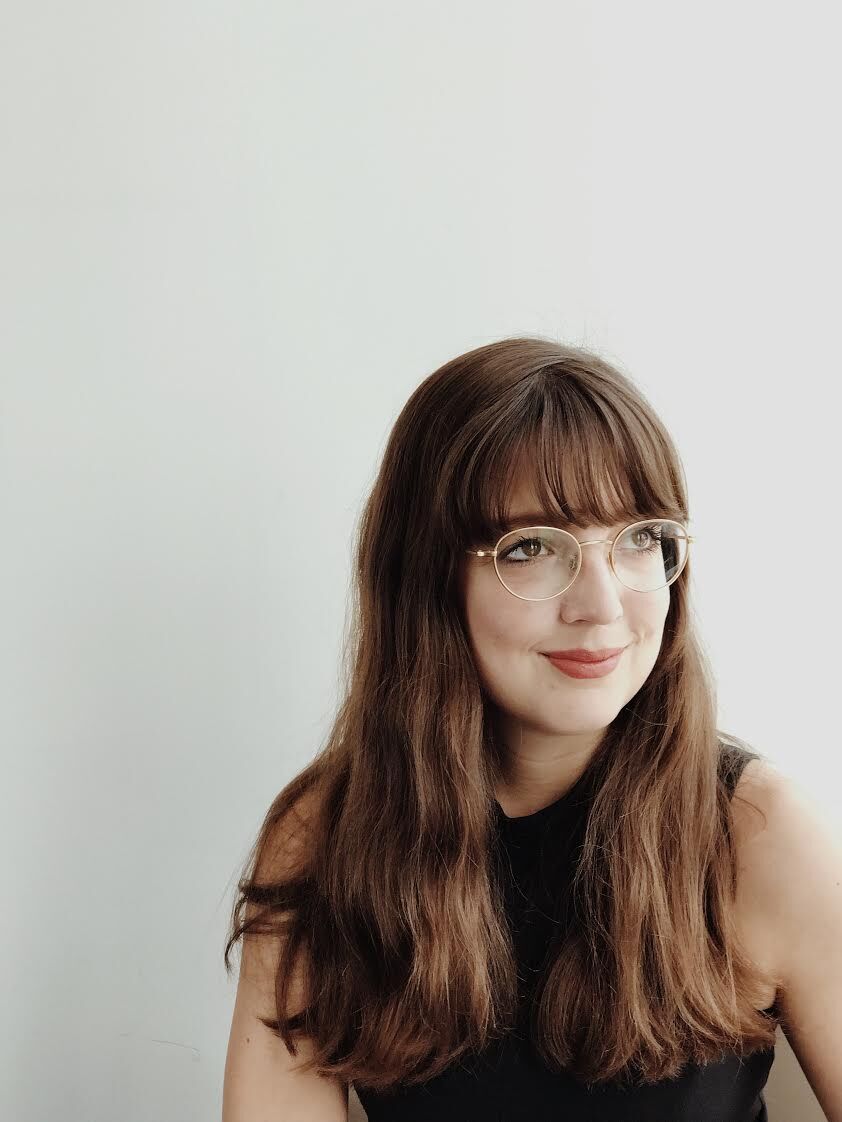 Emma Allen’s office in The New Yorker magazine’s headquarters is the stuff of every comic nerd’s dreams.
Hand-drawn cartoons by famous humorists paper the walls. A long row of book shelves heaves under the weight of cartooning bibles. Mordantly funny notes decorate the space around her computer (in flowery cursive, one reads: “Life in Florida is complete hell”). Allen’s desk is scattered with issues of the venerable magazine, into whose pages she has shepherded a multitude of very funny cartoons and humor essays.
At 29-years old, Allen is the youngest-ever humor and cartoon editor at The New Yorker, a magazine famous for interlarding its serious, long-form reportage with clever gag cartoons: several-inch wide boxes containing a black-and-white illustration and a witty one-line caption to match. Allen took on the position in May, when the magazine’s legendary cartoon editor of 20 years, Bob Mankoff—the subject of a 2015 documentary by Leah Wolchok, Very Semi-Serious: A Partially Thorough Portrait of New Yorker Cartoonists—jumped ship to head to Esquire as the magazine’s cartoon and humor editor.
In many ways, Allen is Mankoff’s opposite. He was notorious for his big, extroverted personality and candid editing tactics. “It used to be that Bob would get a batch of cartoons, print them out, and often throw the ‘nos’ back at you,” Allen tells me, sitting in her office on the 38th floor of 1 World Trade Center.
“I find that harrowing as someone who’s been edited and been subject to rejection. And as someone who is new and younger than many of the people who I’m across the table from,” she admits with a laugh.
Allen is no humor novice, though. She may be green to the storied role and the host of responsibilities (and great office) that come with it, but you might say she’s been preparing for this job for 20-odd years. “I’ve been a New Yorker cartoon reader, and an obsessive fan girl of their gag cartoons, since I was a kid,” she says. Later, as a double major at Yale in English and Studio Art, she spent no small amount of time writing and editing for Yale Daily News. “There, I secretly used my Arts and Living column as a humor platform,” she says. 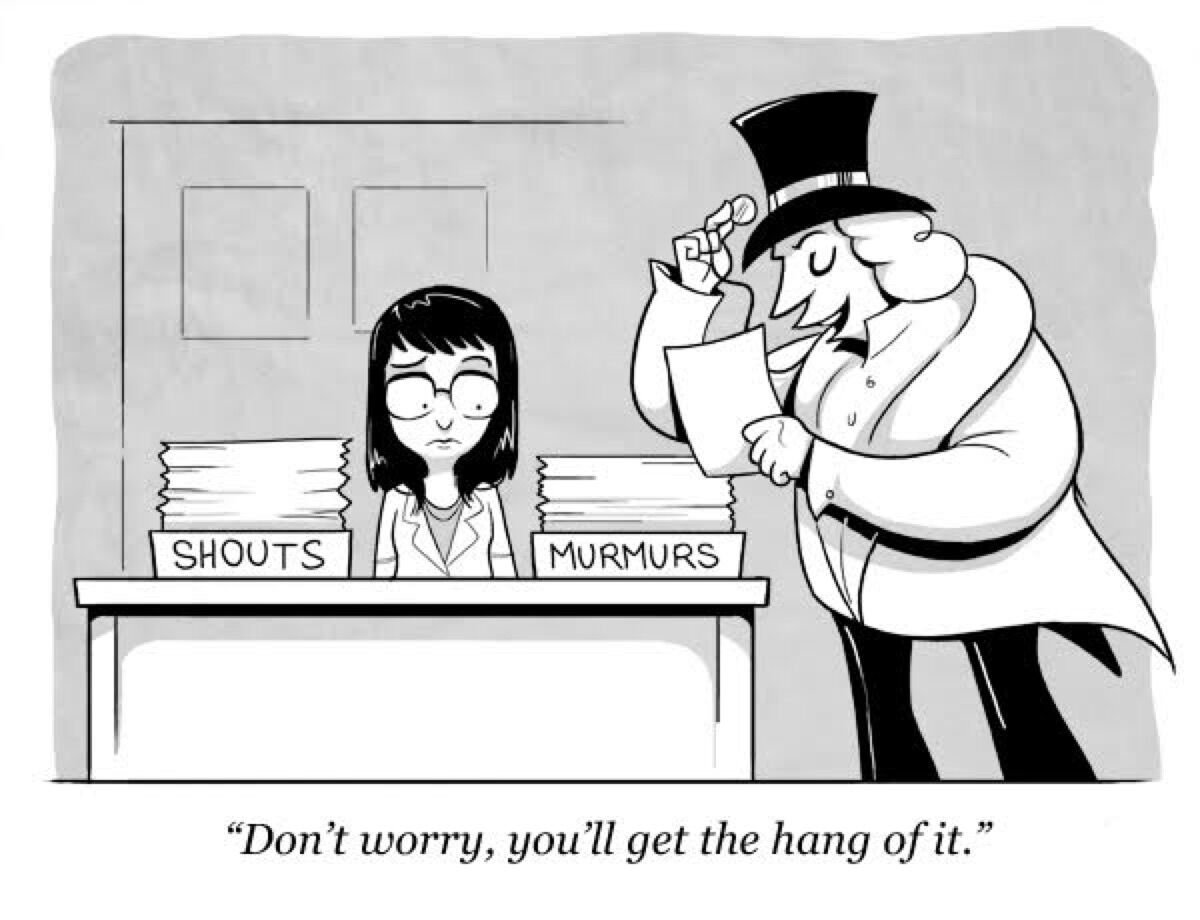 After graduation, Allen headed back to her hometown of New York City and penned articles for the New York Observer, ARTNews, and Modern Painters before landing at The New Yorker in 2012. First, she was editor Susan Morrison’s assistant, then assistant editor of the “Talk of the Town” section—the magazine’s familiarly punchy, urban slice-of-life vignettes—and “Shouts & Murmurs” section, the humor column.
It was in the latter, though, that she identified a problem—and solving it became her focus. “With Shouts, we had the real estate problem: You get a page a week, and that’s it,” Allen explains. “But there are so many incredible talents and so many diverse voices in humor that we wished we could incorporate. We could fill the whole magazine with humor content, given the number of great submissions we have.”
Her solution became Daily Shouts, a section of The New Yorker’s website that would publish one to two pieces per day from a range of up-and-coming voices, among them Emma Rathbone, Cirocco Dunlap, Hilary Fitzgerald Campbell, duo Nehemiah Markos and Jed Feiman, Nomi Kane, and Susanna Fogel. The initiative was well-received, and The New Yorker’s editor-in-chief David Remnick took note, promoting Allen to helm the section. “Then David asked if I want to take on cartoons as well, and it created this full-pan humor gig,” she shrugs, endearingly nonchalant about a gig that many twenty-somethings might kill for.
It’s a new role at the magazine. While Mankoff focused on cartoons, Allen has a fuller plate, overseeing Cartoons, Daily Cartoons online, Shouts & Murmurs, Daily Shouts online, and humor videos and podcasts. She and the magazine’s associate cartoon editor, Colin Stokes, also star in a video series, “Cartoons, Etc.,” in which they engage with a rotating cast of guest cartoonists “so that fans can put a face to the squiggle signature,” Allen explains. They also have plans to introduce Daily Comics, or “multi-panel, longer-form funny things” to the website’s comic ecosystem.
“Some part of my brain self-protectively has made me forget what it was like the first couple months,” Allen says when I ask how she’s acclimated to wearing this rather Herculean number of hats. “After the initial blitz, it’s been more of a regular job that I can come in and do, and go home and not collapse in a heap or cry or drink a bottle of scotch.” Advertisement
She notes that “the biggest hurdle has been navigating the world of cartoons.” Unlike Mankoff, who is a cartoonist himself, Allen isn’t part of the community’s inside circle. “It’s like the art world,” Allen explains. “It’s a very small universe where everyone spends all of their time with the same people.” Namely, it’s been a challenge to incorporate new voices and strategies that expand The New Yorker’s humor content, while also respecting and retaining the old guard: the cartoonists and comics who made the magazine’s funnier output famous, like George Booth or Roz Chast.
“Some of them have been doing this for longer than I’ve been alive and are churning out amazing batches every week,” Allen explains, referring to the group of submissions that the magazine’s regular cartoonists submit each Tuesday. “So I’m learning it’s about being protective, being an advocate for the people who have been doing this forever, and also finding new and interesting voices without tipping the balance too far in one direction or the other.”
While Allen inherited a cohort of established cartoonists—“I’ve never had so many octogenarian confidantes bringing me the latest cartoon gossip on a weekly basis,” she chuckles—it’s been up to her to continue to find new talent, as well as new platforms for attracting the next generation of humorists.
When it comes to gag cartoons, in particular, it’s been an uphill battle. “Many cartoonists are focused on web comics and graphic novels and have no interest whatsoever in doing gags,” Allen says. “It’s a chorus of: ‘I can’t think in a single box. I think in 40,000 boxes! I just wrote a 400 page book!’ So it takes some convincing.”
So far, though, Allen has proved her powers of persuasion. She discovered comic artist and illustrator Jessica Campbell’s zine Hot or Not: 20th-Century Male Artists (2016) at the bookstore Good Egg in Toronto, and reached out. “She was the whole package,” Allen says. Campbell’s first single-panel gag will soon appear in the print edition of The New Yorker, with plans to excerpt her graphic novel (due out in May 2018) online.
The website has become a fruitful place for Allen to experiment with strategies that she hopes will keep the magazine’s humor content fresh, funny, and relevant. She sees the Daily Cartoon and forthcoming Daily Comic sections, for instance, “as a nice way to get in new voices that aren’t necessarily selling to the magazine every week and have different takes on current events.” 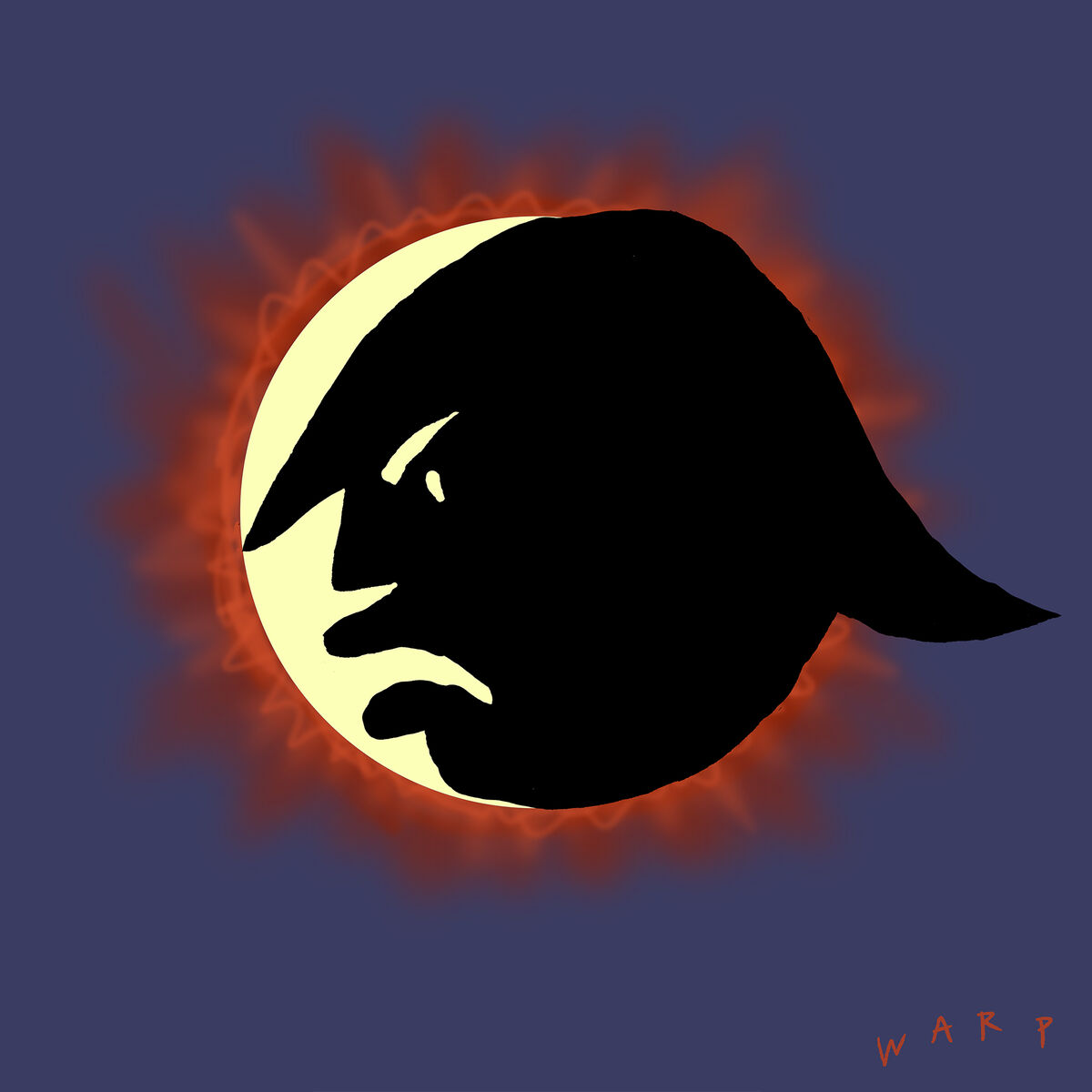 Early in the morning, cartoonists submit ideas for the Daily Cartoon, and from their respective beds Allen and Stokes select the one or two gags that they’ll publish online that day. The morning I visited Allen, the comics posted online responded to a range of timely happenings—from the Trump administration’s latest gaffe to the solar eclipse. One cartoon by Kim Warp cannily fused both: Trump’s black silhouette moved over the moon, blocking out most of its yellow glow.
Perhaps the development Allen is most excited to plot, though, is a future at The New Yorker in which cartoonists and comedic writers regularly expand beyond a single box or a single page—a format that many artists, like on-the-rise cartoonist Jason Adam Katzenstein and humorist Blythe Roberson (who has written for The Onion, ClickHole, and other outlets), are excited to explore.
“One of the best parts of having a job that’s so broad is that people can work in these different mediums and move back and forth pretty seamlessly, since all ideas can just come to me,” Allen explains. Right now, she, Katzenstein, and Roberson are joining forces to produce an online feature that will combine “Jason’s illustrations, Roberson’s words, and our multimedia and coder gurus’ magic,” she says.
Allen hopes this is just the beginning of this type of collaboration, that will give cartoonists and comedic writers new platforms to stretch and amplify their work—and simultaneously update The New Yorker’s venerated humor content to reflect the increasing diversity of hilarious voices.
—Alexxa Gotthardt