Why the Met Gala Matters to the Art World Diana Vreeland, special consultant to the Costume Institute of the Metropolitan Museum of Art, in New York, seated in center and surrounded by models and actresses wearing costumes and masks for the “Romantic and Glamorous Hollywood Design” exhibition, 1974. Photo by Francesco Scavullo/Condé Nast via Getty Images.

By now, the flurry around the first Monday in May is all too familiar: the flashbulbs firing and couture gowns trailing the red carpet, leading into the Metropolitan Museum of Art for the institution’s annual Costume Institute Gala—or, as it’s become known, the Met Gala. Each year, attendees are asked to dress according to the theme of the spring exhibition—this year’s being “Camp: Notes on Fashion,” which will unpack quirky, over-the-top ensembles with Susan Sontag’s seminal essay “Notes on ‘Camp’” in mind.
We may primarily remember the glittering gowns of the gala—Rihanna’s magnificent yellow Guo Pei regalia in 2015, or Cher’s “Naked Dress” by Bob Mackie in 1974. But when the bevy of influential celebrities take inspiration from (or ignore) the theme, we should remember the Costume Institute’s purpose: to reinforce the role of fashion in art. 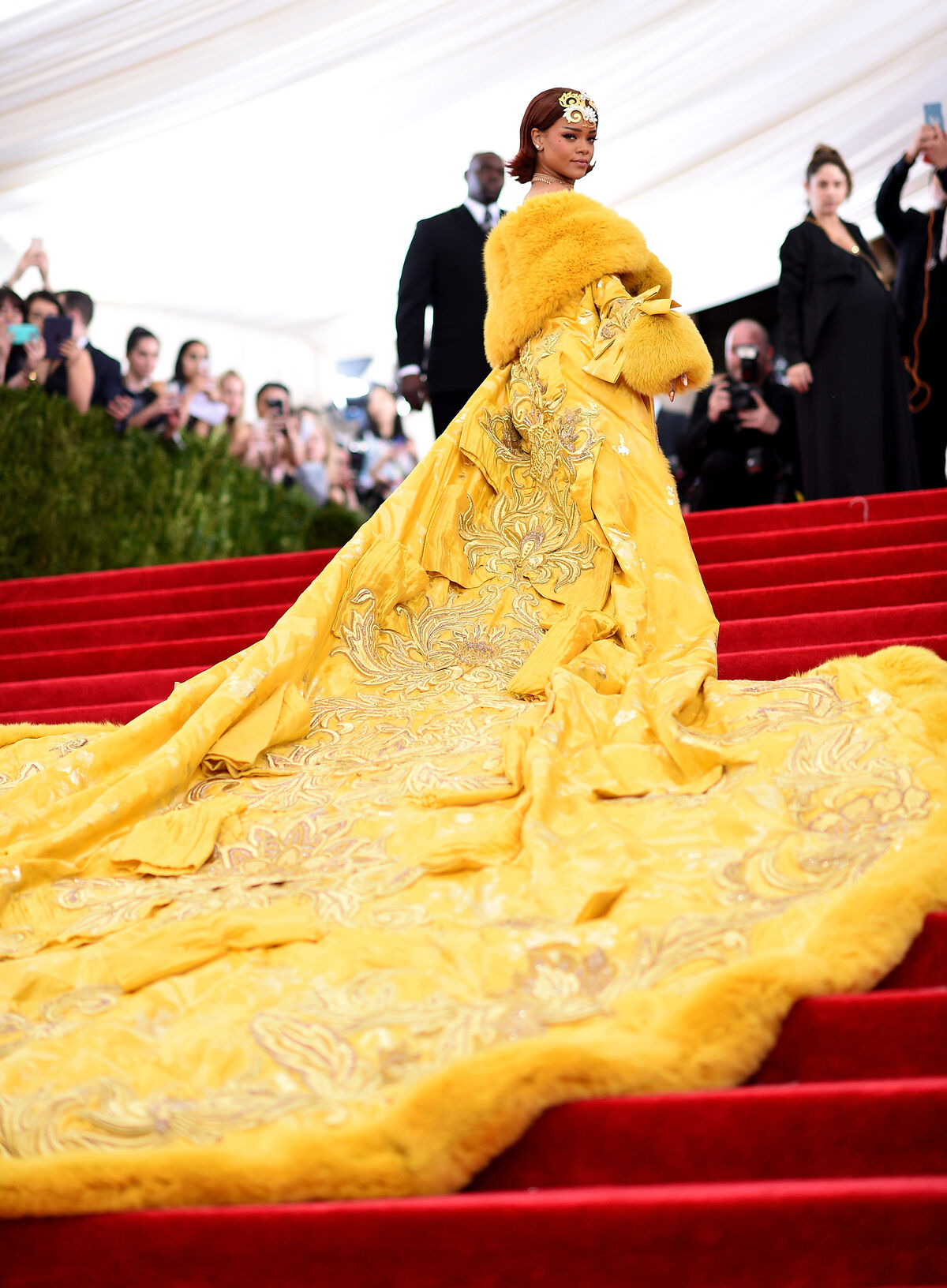 Rihanna at the “China: Through The Looking Glass” Costume Institute Benefit Gala at the Metropolitan Museum of Art, New York, 2015. Photo by Dimitrios Kambouris/Getty Images. “The Met Gala and the Costume Institute shine light on the creative process of design,” said renowned costume designer Patricia Field. “Fashion affects the art world as it provides a bridge of understanding and experience to all who participate in both.” The gala makes that direct connection, drawing the attention of those both enamored of and unfamiliar with costume and fashion design. Model Iman and Gianfranco Ferré at the Costume Institute Gala honoring Gianni Versace at the Metropolitan Museum of Art, 1997. Photo by Mitchell Gerber/Corbis/VCG via Getty Images. 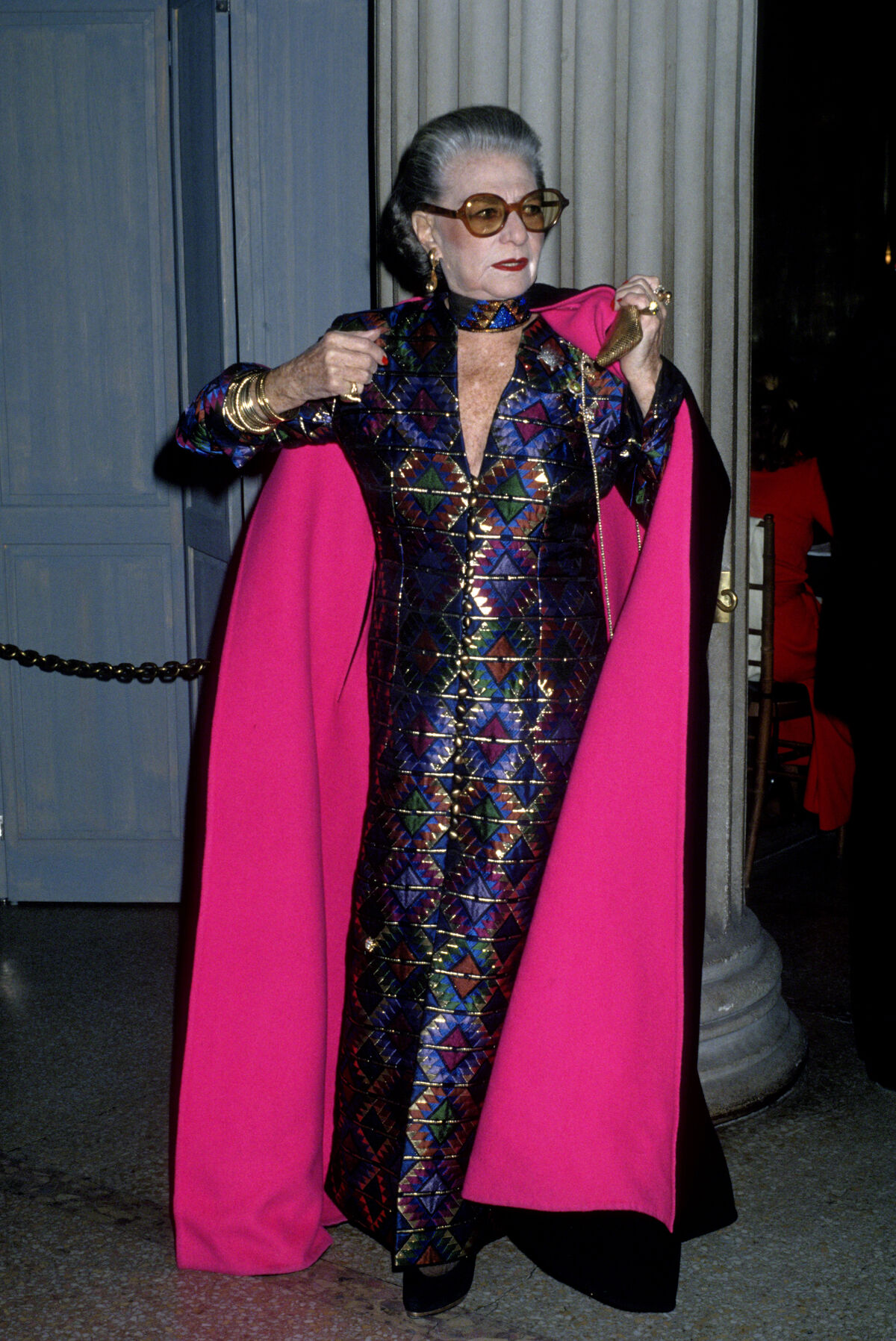 Advertisement
Without the Met Gala, the Costume Institute wouldn’t be able to fund itself. Formerly the Museum of Costume Art, founded by philanthropist Irene Lewisohn, it merged with the Metropolitan Museum of Art in 1946, but remains the only department at the museum that has to raise its own funding—perhaps due to questions about whether or not fashion is, in fact, considered an art form. It’s the gala’s patronage that supports the exhibitions, as well as the institute’s staff, costume conservation, and maintenance of its archive of over 35,000 pieces from the last 600 years.
The gala was the brainchild of fashion public-relations legend Eleanor Lambert, who also founded “Fashion Press Week” in 1943, the precursor to New York Fashion Week. In the early years, it was a gathering of New York’s socialites. Billed by Lambert as the “Party of the Year,” the first event in 1948 cost $50 a ticket (or $527 today, when adjusted for inflation). It wasn’t held at the museum until 1972, but instead at elite venues like the Rainbow Room and the Waldorf Astoria. Diana Vreeland shows off a one seam coat by Balenciaga at The Metropolitan Museum of Art, New York, 1973. Photo by Bettmann via Getty Images.

It was with the arrival of Diana Vreeland in 1972 that the Met Gala took shape as more than just a society party, but rather as “a grand fête for both the social and art worlds,” according to the museum. After leaving her storied position as editor-in-chief of Vogue, Vreeland began at the Met as a special consultant. She implemented the yearly themes, asking attendees to take inspiration from the new exhibition.
“Until the spring of 1973, it could be said that the field of costume had been a sleepy and rarified one, at least in the context of museums,” wrote Richard Martin and Harold Koda in their 1993 text Diana Vreeland: Immoderate Style. Before she joined the Met, costume displays were antiquated and flat, they added, lacking appeal beyond those who specialized in the field. Vreeland energized the idea of the costume exhibition with inventive displays. “The staff granted Mrs. Vreeland glossy magenta walls, headless mannequins, elephants, and carriages,” Martin and Koda wrote, “because they had come to learn that her instincts were rarely wrong.” Bianca Jagger and Mick Jagger at the at the Costume Institute Benefit Gala at the Metropolitan Museum of Art, New York, 1974. Photo by Ron Galella/WireImage. 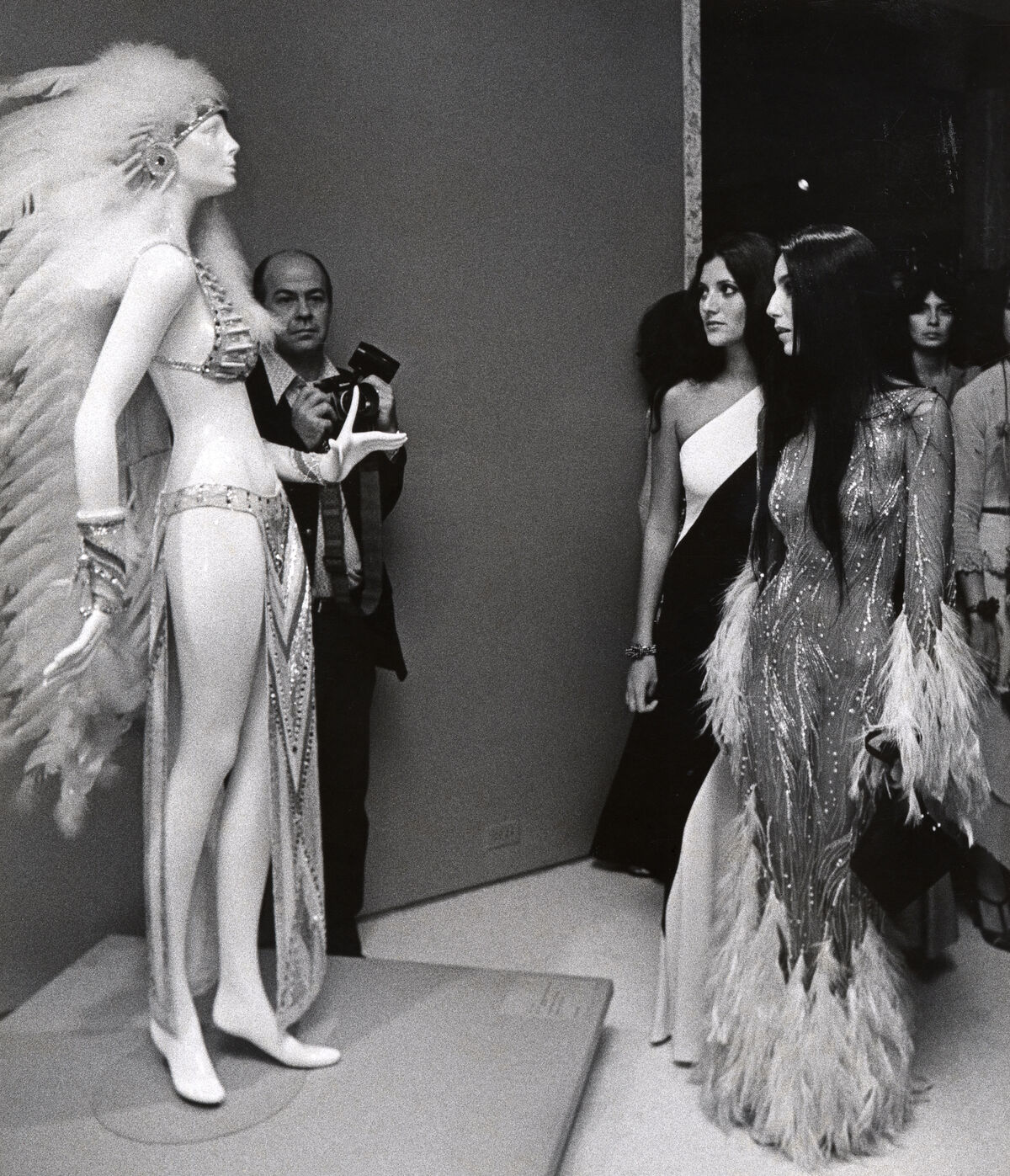 Vreeland’s makeover of costume display started with her first exhibition, “The World of Balenciaga.” It was, by all accounts, a blockbuster show—the first of many. Among her other great successes were 1976’s “The Glory of Russian Costume,” which featured Peter the Great’s boots (Vreeland traveled to Russia explicitly to get them) and a silver wedding dress worn by Catherine the Great; and “Romantic and Glamorous Hollywood Design,” which featured both original and reproduced designs of costumes worn in films like My Fair Lady (1964), Gone With the Wind (1939), and A Midsummer Night’s Dream (1935). Vreeland’s exhibitions reinforced the idea that fashion was truly an art form with real cultural impact, one worthy of consuming in a similar context as “traditional” artwork like sculpture and painting. 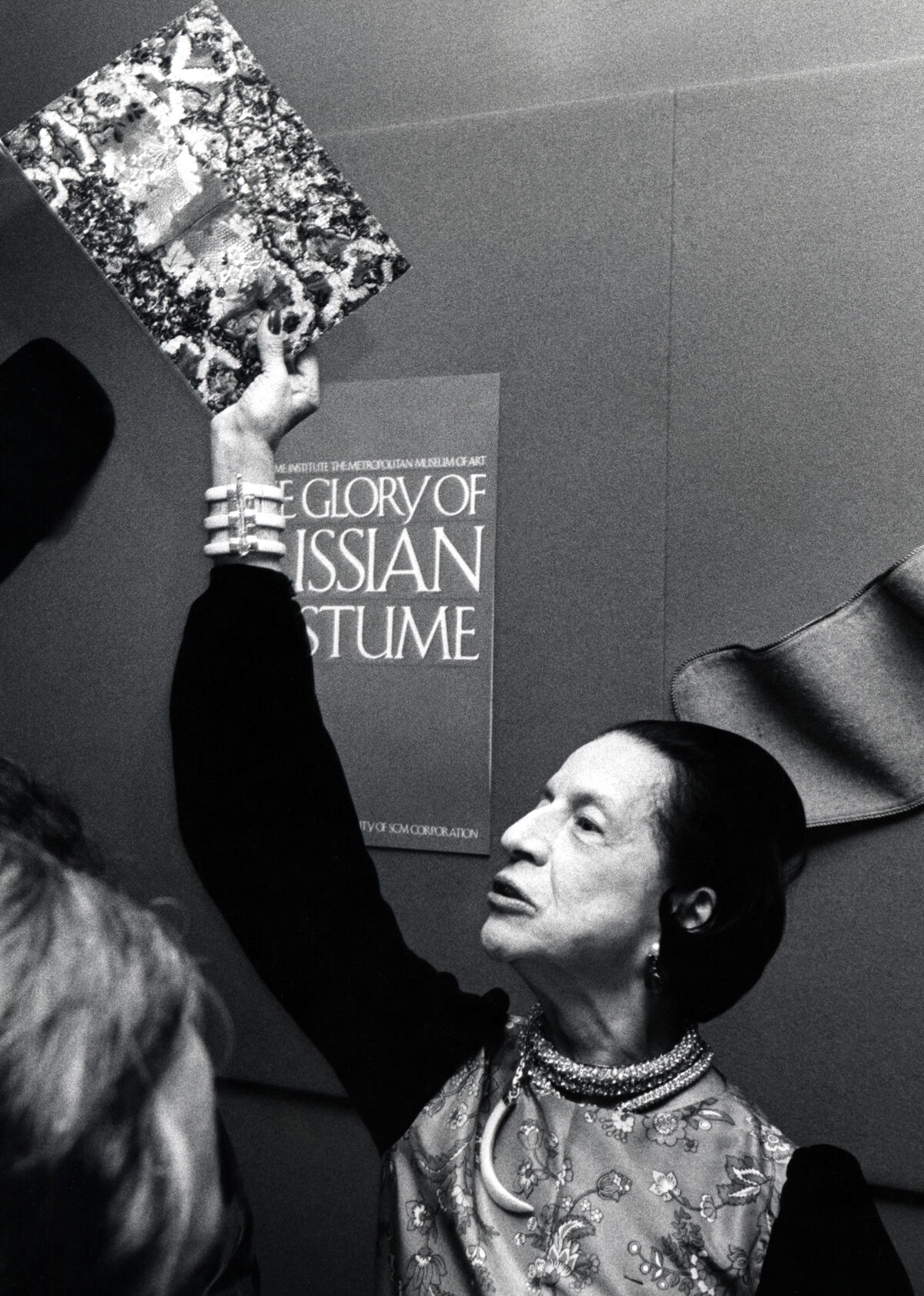 Because of Vreeland’s shows, the public was invited to think about and experience costume in a new way. It was no longer a niche specialty; it was a vibrant and curious area of design that people were excited to explore. Rather than just a display of historical garments, Vreeland connected the styles to contemporary fashion and the modern world. 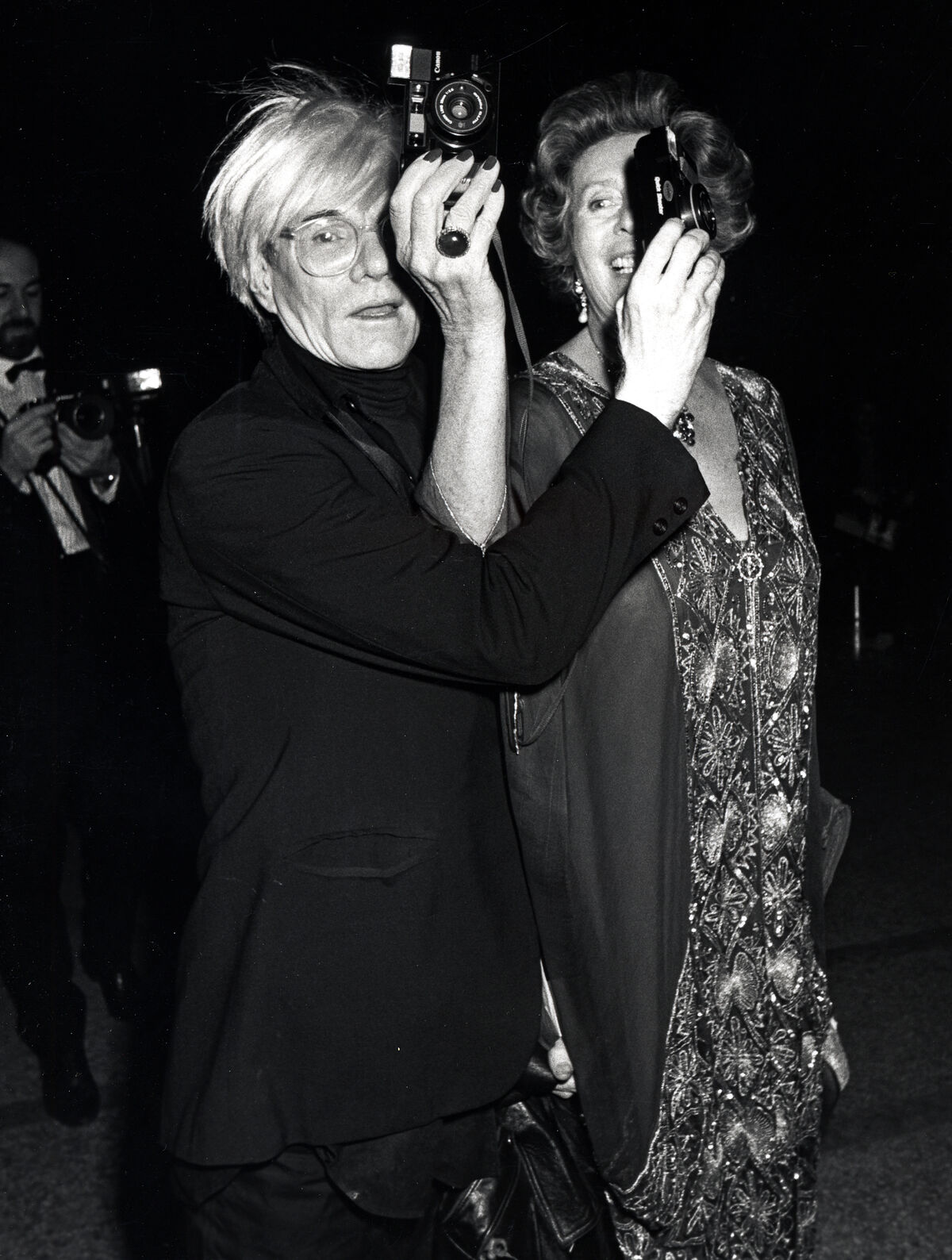 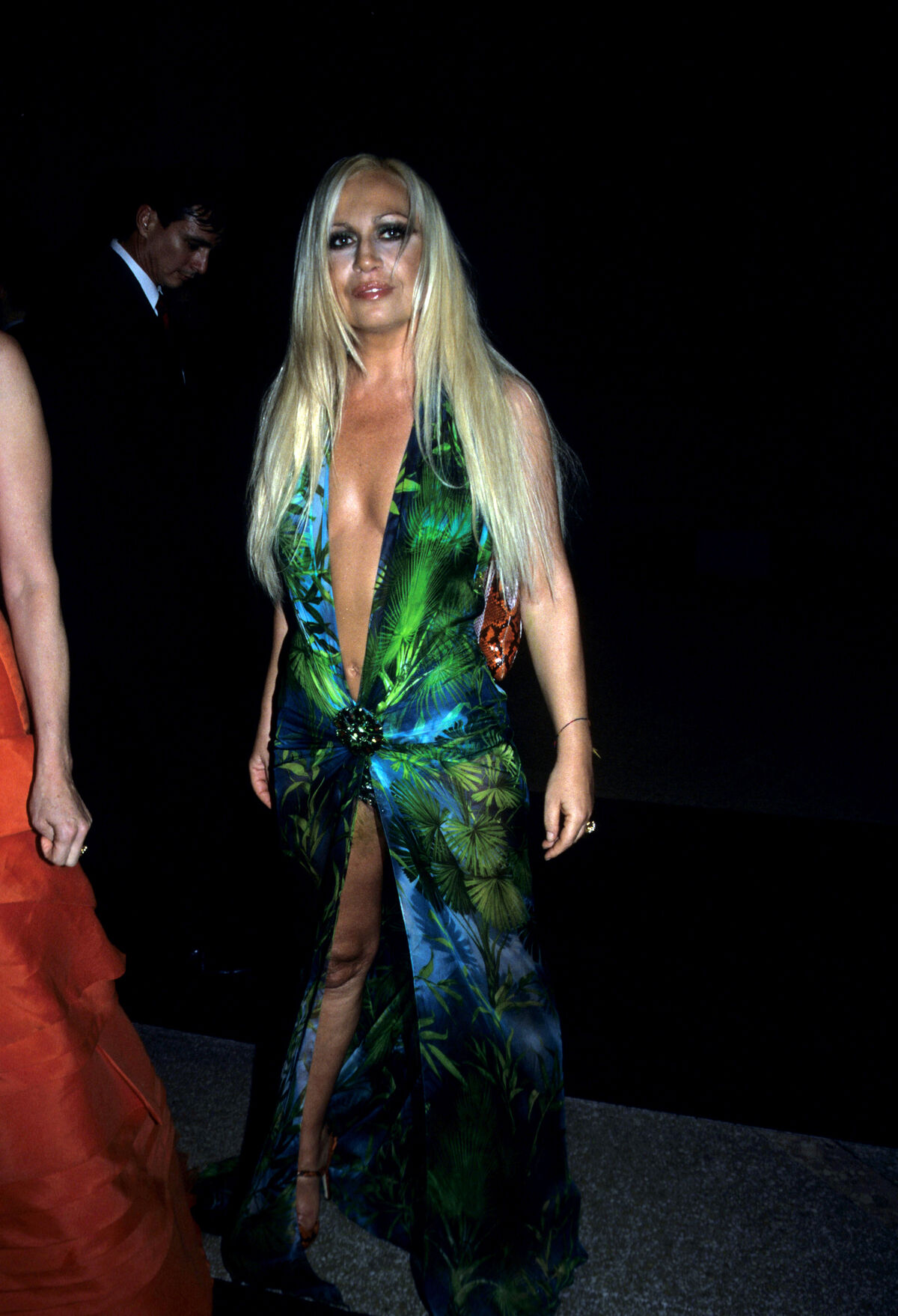 Donatella Versace at the Costume Institute Benefit Gala at the Metropolitan Museum of Art, New York, 1999. Photo by Mari Sarai/Wireimage.

During Vreeland’s tenure, celebrities also flocked to the gala. The guest list swelled to include the likes of
Andy Warhol
and Cher, and Jacqueline Kennedy Onassis even served as co-chair in 1977 and 1978. Seeing the increased and renewed interest in the Costume Institute’s shows, gifts of both funding and costume grew during her tenure, which ended with her passing in 1989. Anna Wintour, editor-in-chief of Vogue, took the helm of the gala in 1995, and has co-chaired nearly all of the events since. Today, the Met Gala draws celebrities from all across culture, including film, art, politics, sports, and music. Their presence has led to record-breaking shows like “Alexander McQueen: Savage Beauty” in 2011, which took place shortly after the designer’s passing; and “China: Through the Looking Glass” in 2015. Exhibitions have also straddled the fashion and art worlds explicitly, with shows like 1982’s “La Belle Époque,” 1998’s “Cubism and Fashion,” and 2004’s “Dangerous Liaisons: Fashion and Furniture in the 18th Century.” 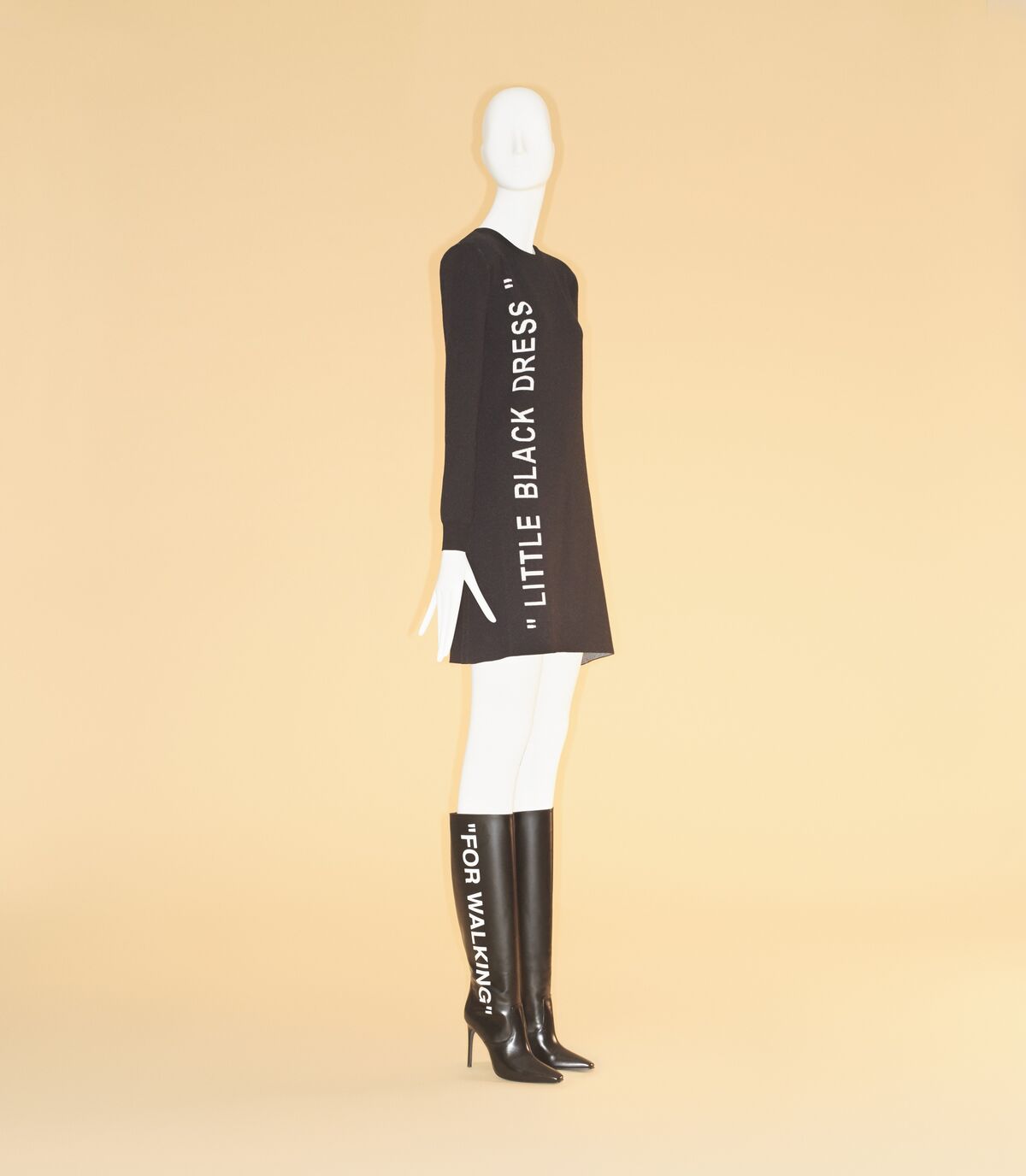 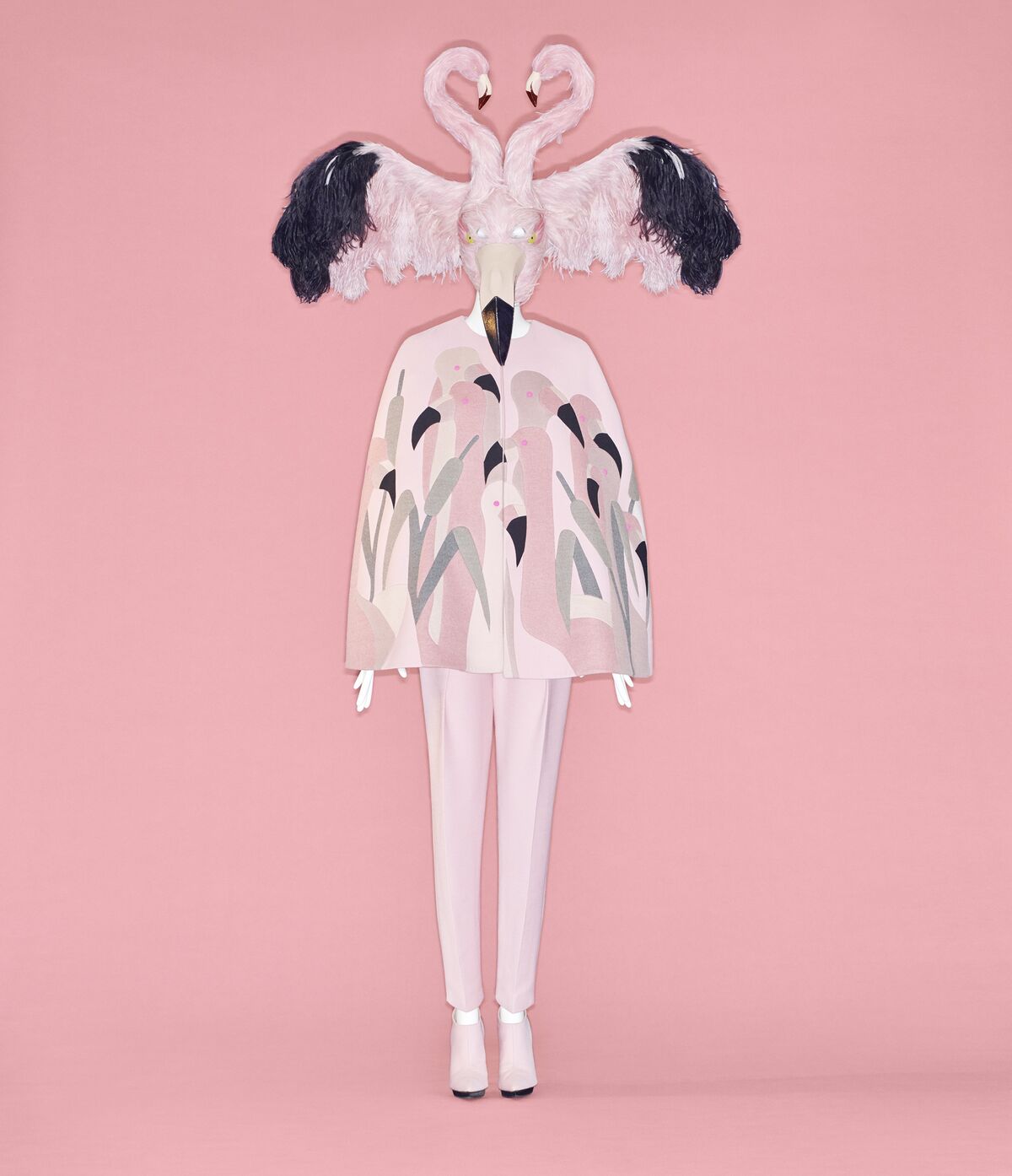 Bertrand Guyon and headpiece by Stephen Jones for House of Schiaparelli, fall/winter 2018–19 haute couture. Photo © Johnny Dufort, 2019. Courtesy of Schiaparelli and The Metropolitan Museum of Art.

This year, gala attendees will take inspiration from camp, the exhibition featuring tongue-in-cheek works including Moschino’s paper doll collection, Marjan Pejoski’s iconic swan dress worn by
Björk
in 2001, and Virgil Abloh’s self-declaring “Little Black Dress.” Because of the Costume Institute, these inventive designs are no longer just garments, but require the same care in display as a
Vincent van Gogh
portrait or an
Alexander Calder
mobile. They represent a story of an era in culture, a creative idea made physical through color and textiles—in short, a work of art.
Elyssa Goodman
Related Stories