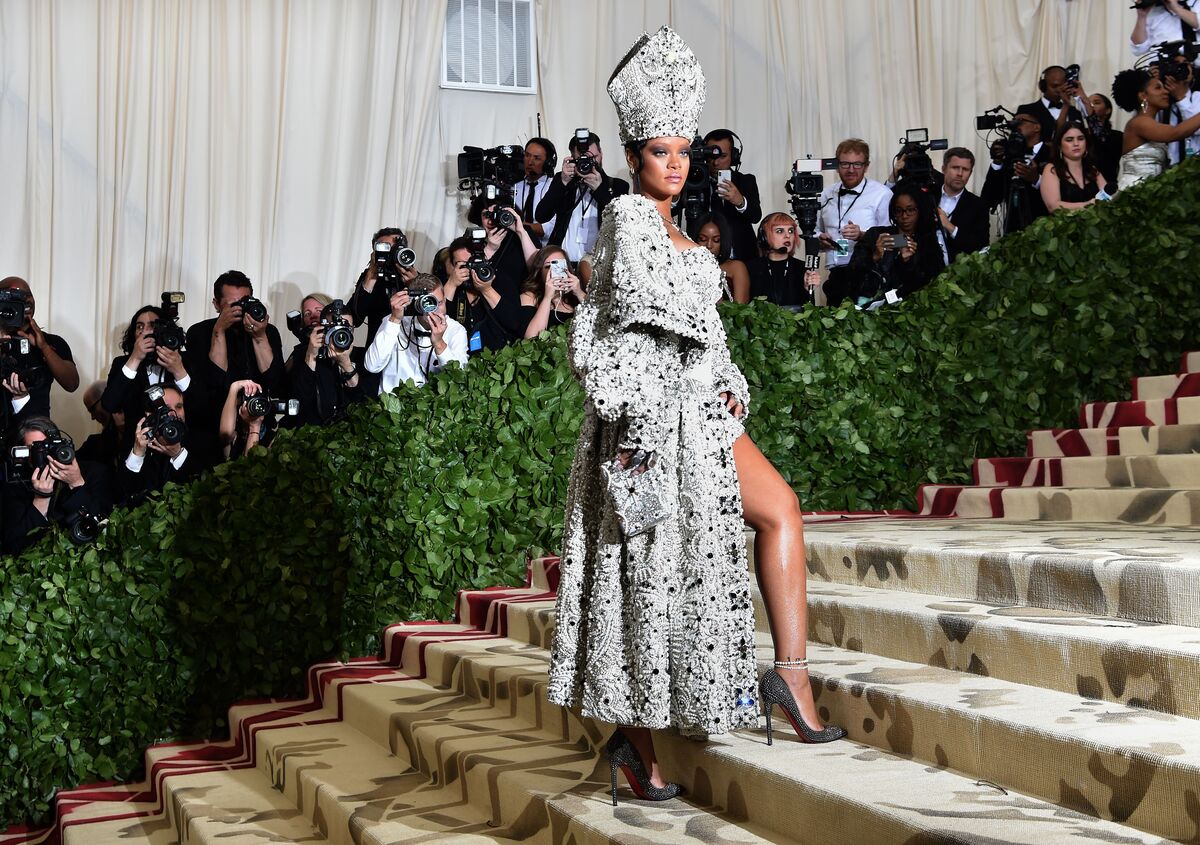 Rihanna arrives for the 2018 Met Gala on May 7, 2018, at the Metropolitan Museum of Art in New York. The Gala's 2018 theme is “Heavenly Bodies: Fashion and the Catholic Imagination.” Photo by Hector Retamal/AFP/Getty Images.

Monday’s “Heavenly Bodies: Fashion and the Catholic Imagination” preview at the Metropolitan Museum of Art sufficiently inspired at least one deadly sin: greed. Glimpsing the designer outfits (and even the ecclesiastical garb) on view throughout the Met’s
Byzantine
and
medieval
galleries; Anna Wintour Costume Center (its largest exhibition to date); Robert Lehman Wing; and the Cloisters, a visitor was wont to covet at least a few pieces.
At the Met Gala later that evening, Rihanna’s outfit riffed on one of the exhibition’s most fabulous get-ups: the House of Dior’s Evening Ensemble from autumn/winter 2000–01, designed by John Galliano. The lavishly embroidered and jeweled robes matched the garments’ accompanying “mitre,” a kind of headdress for bishops (perhaps most popularly depicted in their chess piece representations). Galliano also created Rihanna’s look—a silver mini-dress, matching robe, and mitre—though, this time, for Maison Martin Margiela, where he’s worked since 2014. Thanks to High Priestess Robyn Rihanna Fenty, it’s now as good a time as any to investigate the mitre. (Whether this look inspires highly structured, ornate headwear for future collections remains to be seen.)
As Rihanna co-opted a symbol of Catholic power, she simultaneously undermined the more detrimental tropes of the belief system and highlighted its potential for creative and aesthetic advancement. She emphasized what the world should already know: that you need not be white, Catholic, or a virgin to deserve reverence (though in America, you might need to be a celebrity). 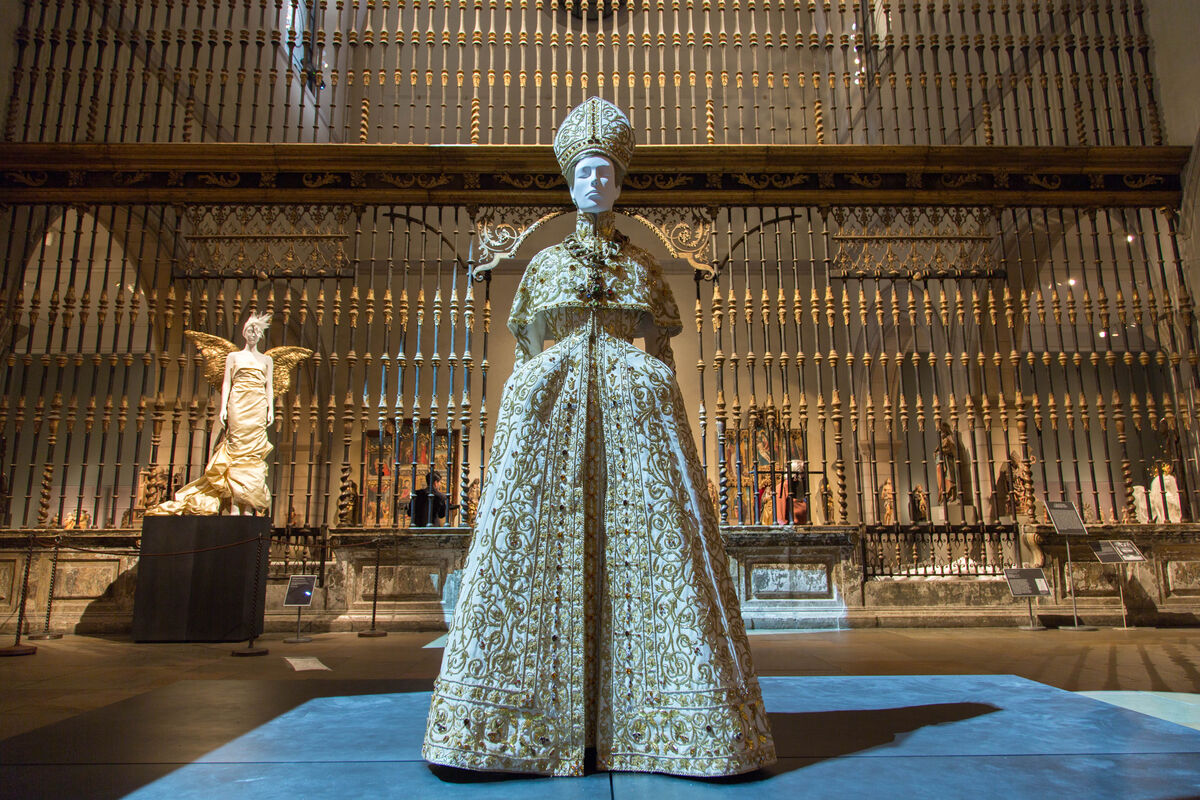 The exhibition itself hinges on the assertion that the enchantments of Catholicism (stained glass, rosary beads, holy water) have inspired designers who grew up in the religious tradition. Yet the more sinister imaginings of the sect are also subtly present: The press materials suggest that Christian Lacroix’s wedding ensemble from autumn/winter 2009–10, along with his other designs, “invoke the concept of the ‘virgin bride.’” Throughout many of the show’s white gowns, the concept of the virgin birth reverberates. So does its corollary: the madonna/whore complex, which relegates women to two proscribed stereotypes—either pure or debased. (Fittingly, Madonna—the pop star—sang “Like a Virgin” at the gala.) For millennia, this dichotomy has inhibited sexual expression for both women and men.
The portion of the show situated in the Cloisters explicitly references the Crusades. The curators placed a beige quilted canvas ensemble by British designer Craig Green in dialogue with the Nine Heroes Tapestry, which features the Catholic warriors used to inspire the succession of 11th- to 13th-century conflicts, from King Arthur to Charlemagne. They emphasize how
Islamic
art impacts Green, as well; the designer visually unifies elements of cultures that were both the aggressors and aggressed in the ancient conflict.
The exhibition’s mitres themselves have cross-cultural history. In his epic poem “The Faerie Queene,” from 1590, Edmund Spenser writes: “And like a Persian mitre on her hed / She wore.” Here, the mitre is described as non-Western ornamentation and dress for a woman, not a man. At one point, Jewish High Priests wore headdresses known as “mitres,” as well. Indeed, Catholics most likely got the idea from their non-Christian forebears. Though mitres may be best associated with Catholic bishops today, that wasn’t always the case. In that way, Rihanna’s outfit returns the garment to its more diverse origins.
The Vatican also loaned out a series of its own mitres for “Heavenly Bodies,” which together offer a complicated history of politics and religion throughout Italy. The mitre of Pope Paul VI, who reigned from 1963 to 1978, is on view. Its accompanying text reveals that during the second Vatican Council (Vatican II) in 1964, Paul VI ended the use of the papal tiara, making the mitre the official headwear for coronation activities. Vatican II, in general, sought to modernize the church, make it more accessible, and allow its members to more deeply engage with world issues. (HBO’s television series The Young Pope highlighted this moment—and the symbolic importance of ecclesiastical headwear—when Jude Law’s Pope Pius XIII reversed Paul’s decision, and opted to wear the tiara after all.) In these cases, decisions about hats became significant assertions of power and autonomy. 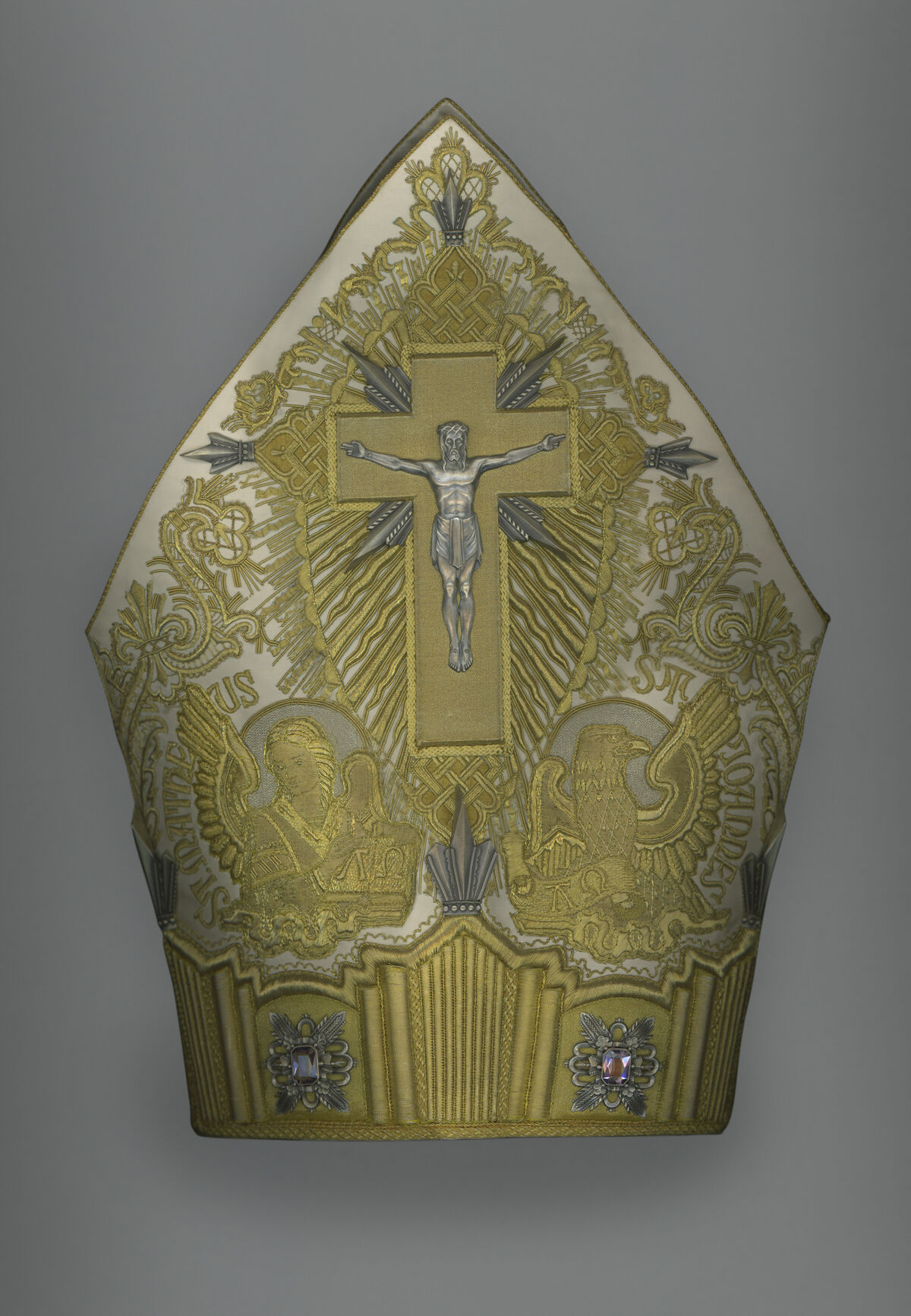 Mitre of Pius XI, 1929. Image by Katerina Jebb. Courtesy of the Collection of the Office of Liturgical Celebrations of the Supreme Pontiff, Papal Sacristy, Vatican City and The Metropolitan Museum of Art. 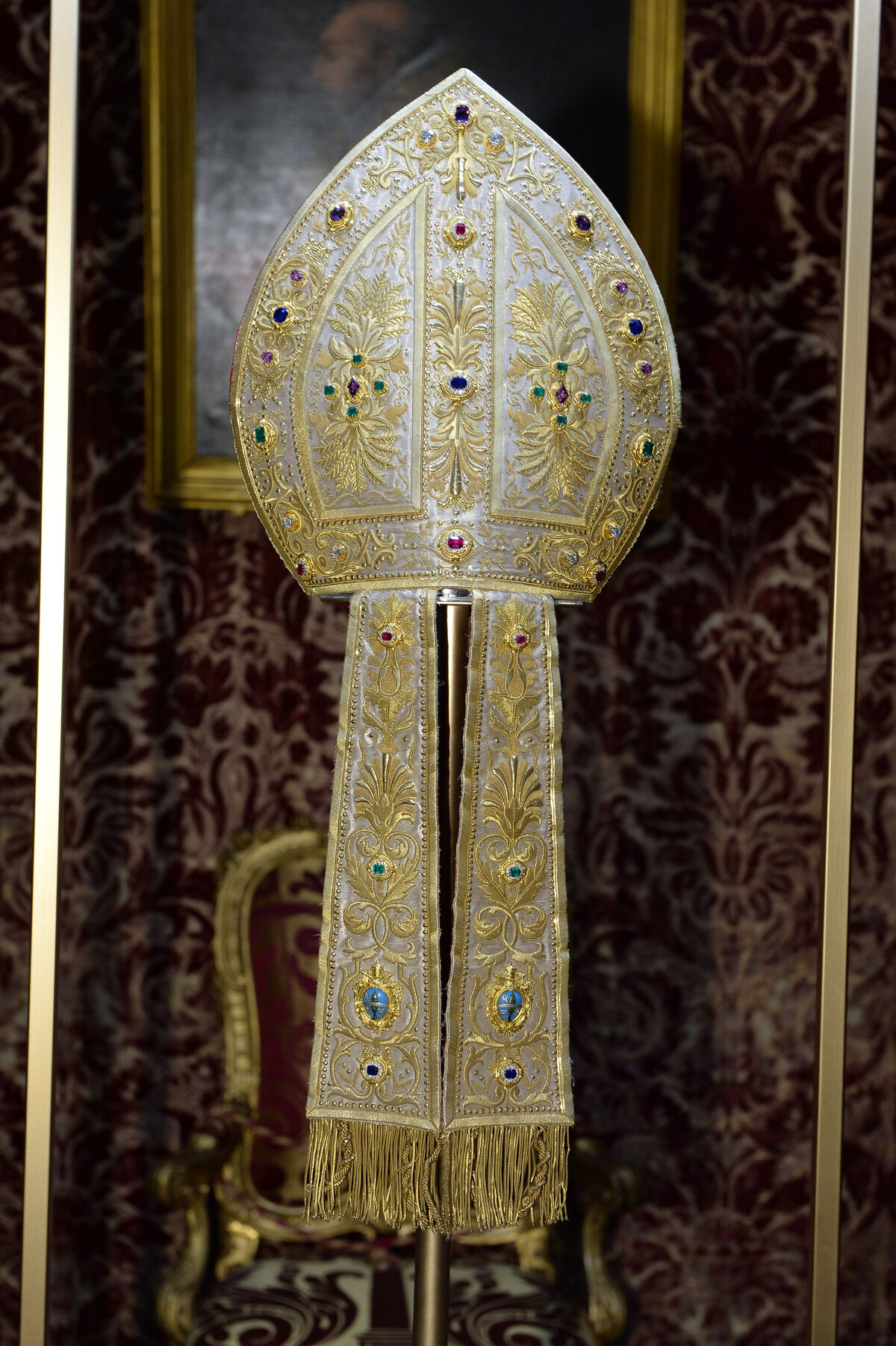 Mitre of Leo XIII. Courtesy of the Collection of the Office of Liturgical Celebrations of the Supreme Pontiff, Papal Sacristy, Vatican City and The Metropolitan Museum of Art/Stefano Guindani Photo.

Advertisement
The mitre of Pope Pius XI is also on view. In 1929, Italy’s then-prime minister Benito Mussolini gifted it to the pope following the signing of the Lateran Treaty, the agreement that made Vatican City an independent state. Nine years later, the Vatican clashed with Mussolini as it challenged his Manifesto of Racial Scientists. Italian Jews lost their rights as citizens, along with their abilities to work and intermarry. The Church took particular issue with the last bit: They were supposed to dictate rules about marriage. (Historians have also faulted the Pope for not aiding persecuted populations during the Holocaust.)
Notably, the Met stays out of these kinds of debates, offering minimal explanation of any potentially contentious issue regarding the Church (not to mention the years of sexual abuse perpetrated and covered up by priests). The Vatican has certainly shown generosity and openness in its partnership with a major American museum; as a result, about 40 of its aesthetic treasures are now widely accessible to visitors of all ages, nationalities, and beliefs (though the Met still requires out-of-town guests to pay a $25 indulgence for hailing from beyond the New York area).
“You may be asking, ‘What’s the Church doing here?’” Cardinal Timothy Dolan said at the exhibition’s preview. “The Church and the Catholic imagination are all about three things: truth, goodness, and beauty.” Nevertheless, the exhibition begs for a healthy dose of skepticism from its viewers, coincident with a deeper examination of Catholic sartorial symbols and their underlying meanings. Praised be Rihanna, who has the power to call our attention to these issues to begin with.
Alina Cohen
Related Stories Why the Mystery of the Met’s Unicorn Tapestries Remains Unsolved
Tiffany Jow
Jul 27, 2017