For Artists, the U.S.-Mexico Border Is Fertile Territory 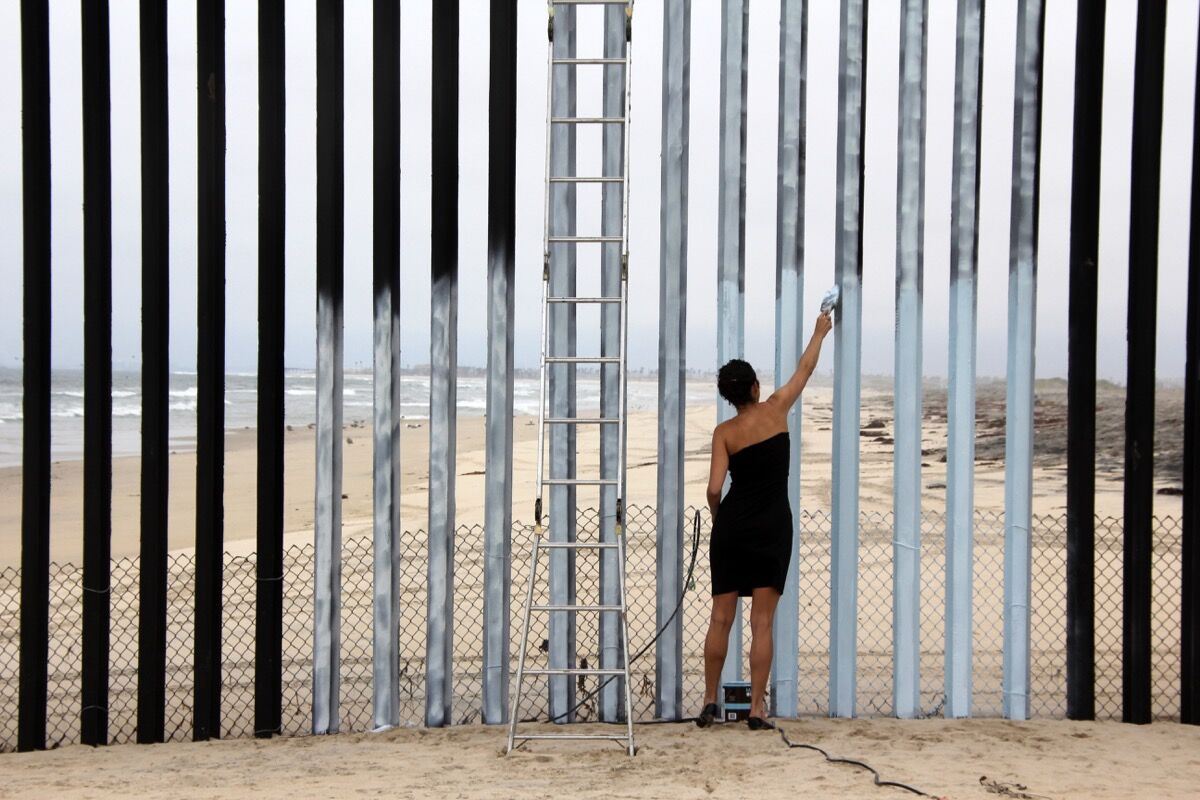 President Trump’s proposal of a multi-billion dollar wall spanning some 1,000 miles along the United States-Mexico border has triggered emotional responses from both sides of the political aisle.
It has also inspired artists, who have responded with designs ranging from a pink homage to famed Mexican architect
Luis Barragán
to artist
Luis Camnitzer
’s petition urging Trump to commission
Christo
to build a version of his and
Jeanne-Claude
’s iconic Running Fence along the border. In a recent conversation with
Pedro Friedeberg
, the legendary Mexican artist and designer suggested the whimsical idea of installing 10 million turnstiles at the juncture between the U.S. and Mexico.
Although the wall looms large in contemporary discourse, the border as a physical, cultural, and symbolic presence is nothing new. “The border has been a contentious site for much longer than the current news cycle’s focus on Trump’s wall,” says Lowery Stokes Sims, co-curator of the upcoming exhibition “The U.S.-Mexico Border: Place, Imagination, and Possibility” at L.A.’s Craft and Folk Art Museum.
Some 85 years ago,
Frida Kahlo
painted a self-portrait straddling the border, in which she is torn between the Aztec ruins of her homeland and the industrial cities of the U.S. More recently, in 2005, Mexican artist
Javier Téllez
shot a human cannonball across the border, where immigration officials were waiting.
Issues surrounding immigration, border security, and the relationship between the two countries have prompted artists to create works both on and about the border for years. Although Trump’s plans have catalyzed more such creative projects, artists are quick to point out that concerns surrounding the frontera reach far beyond his capricious decrees.
Ana Teresa Fernández
, for example, began her “Erasing the Border” project in 2011 in response to increasing border fortifications.
“I did it as a protest when they applied the third layer of mesh and didn’t allow people to touch anymore,” she says, describing the fence that divides a small patch of land near the San Diego-Tijuana border crossing known as Friendship Park. “That’s the area where people used to be able to congregate [on either side] and share meals and touch each other. In 2011 that was no longer allowed, the mesh was implemented, and now you can only touch your fingertips.” 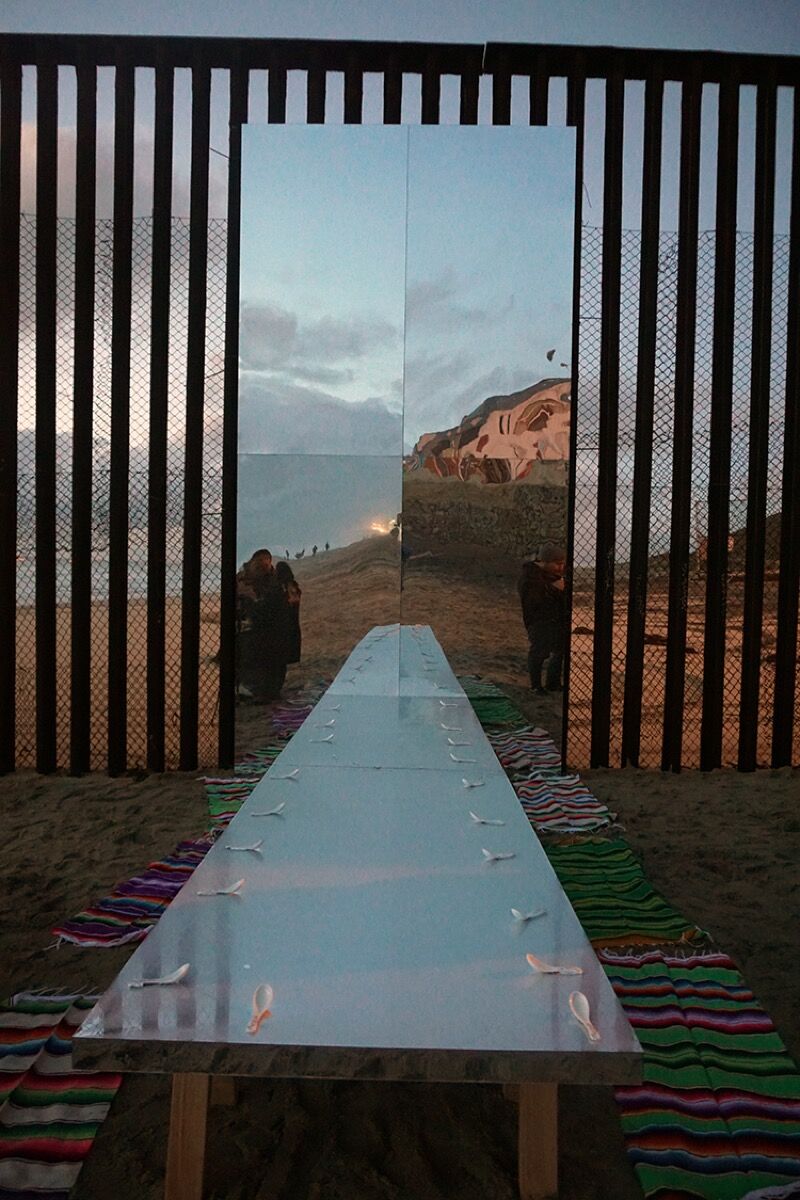 ERRE and Margarita Garcia Asperas, Re/flecting the Border, 2017. Courtesy of the artists. 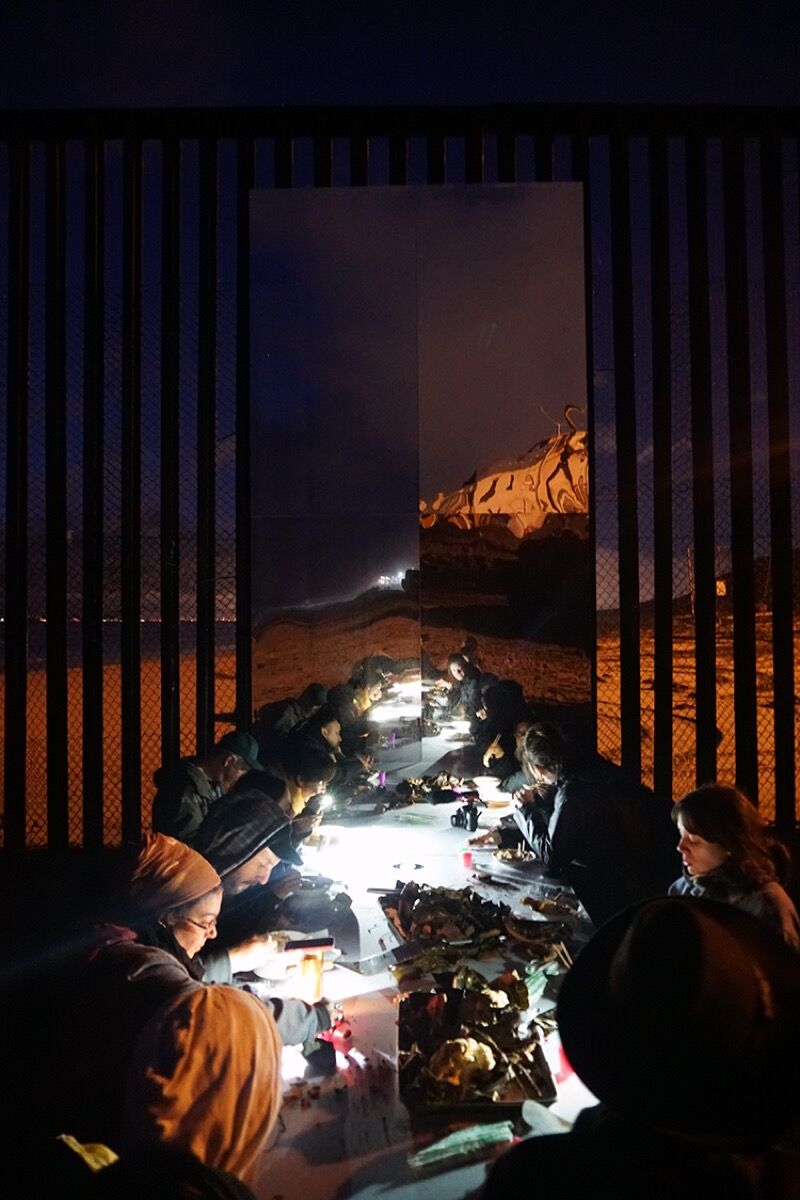 ERRE and Margarita Garcia Asperas, Re/flecting the Border, 2017. Courtesy of the artists.

In response, Fernández painted the upright metal posts a light blue, so that that they seem to disappear against the sky. “I do it on the Mexican side because that wall exists for Mexicans,” she explains. “In San Diego, there’s lots of beaches, but in Tijuana, that’s the only beach people congregate at. I’m doing it for the Mexicans who go there on their day off to rest and meditate and exercise, and they’re met with this visual obstruction.”
Since the initial project, she has painted other sections in Mexicali, Agua Prieta, and Ciudad Juárez. Last December, shortly after Trump’s election, she headed back down to Tijuana to repaint a section of the wall there. A documentary covering the piece, produced by VICE in conjunction with whiskey brand Johnnie Walker, was released last week.
Last Sunday, just a few meters from Fernández’s intervention,
Marcos Ramírez
, better known as ERRE, staged a performative work titled Re/flecting the Border. A collaboration with fellow artist Margarita Garcia Asperas, the piece involved placing a tall mirror against the border, with a 16-by-4-foot table jutting out from it along the Mexican side. A communal dinner was held there, its reflection in the mirror creating the appearance of a cross-border meal.
“With the reflection, you have a 32-by-4-foot-long table with people on both sides, but it’s just an illusion,” ERRE says. “It’s like a mirage.”
This is by no means ERRE’s first border-related piece. He also collaborated with the photographer David Taylor on DeLIMITations, a project that marked the route of the 1821 border—spanning from Oregon to the Gulf of Mexico—with 47 sheet metal posts. “I’ve been working on the border for the last 20 years,” he notes. “For us living in the San Diego-Tijuana region, it’s something that is already there.” 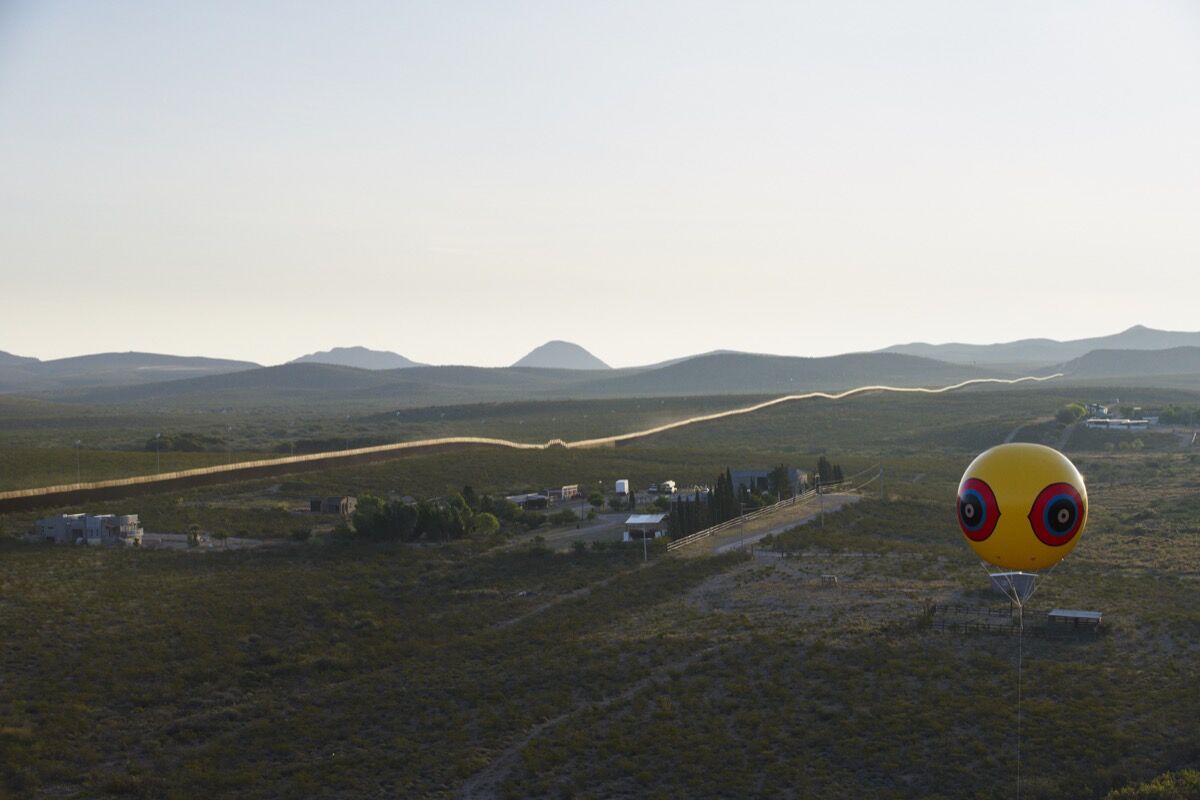 Advertisement
Instead of adding something to the border, L.A.-based American artist Phil America took a piece of it away. Having crossed borders all over the world (including the Burma-Thailand border, for which he spent six months in a Thai jail), America returned to the spot where he had previously crossed the U.S.-Mexico border near El Paso-Juarez. “I was interested in the way the fence looked,” he recalled. “It’s all patched up, with holes that have been cut. You see the footprints in the ground, telling their own stories.”
He cut five large sections out of the chain-link fence and transported them back to L.A., where he gold-plated them, turning them into luxury goods aligned with Trump’s gilded aesthetic. He plans to exhibit them in a white cube, staging a performance where hired Latino day laborers build a brick wall in front of the pieces, blocking them off from view and denying access.
Three-person collective Postcommodity, meanwhile, has created three works on the border, beginning with Repellent Fence (2015), a series of balloons floating high above the Arizona border, emblazoned with indigenous scare-eye patterns. A Very Long Line (2016) followed. The work, which will be featured in the 2017 Whitney Biennial, is a dizzying two-channel video installation for which the camera lens pans along the border at varying speeds, causing a disorienting sense of unease.
Postcommodity’s latest work is Coyotaje, a commission for New York nonprofit Art in General, opening on March 24th, which addresses forms of deception and decoys used by border patrol. In interviews with Department of Homeland Security community liaisons, they learned that the night vision goggles worn by border patrol officials give a greenish glow, and are often mistaken by migrants for mythological chupacabra, creatures that suck the blood from goats.
“You have a lot of indigenous peoples coming from Southern Mexico and Central America for whom the desert is a climate that they’re unfamiliar with,” explains Cristóbal Martínez. “These are things that they’ve never seen before. Part of rationalizing what they’re seeing has to happen through stories and mythologies. Whether Border Patrol does this intentionally or unwittingly, there’s this violence that happens when a people’s indigenous knowledge gets positioned against them.” 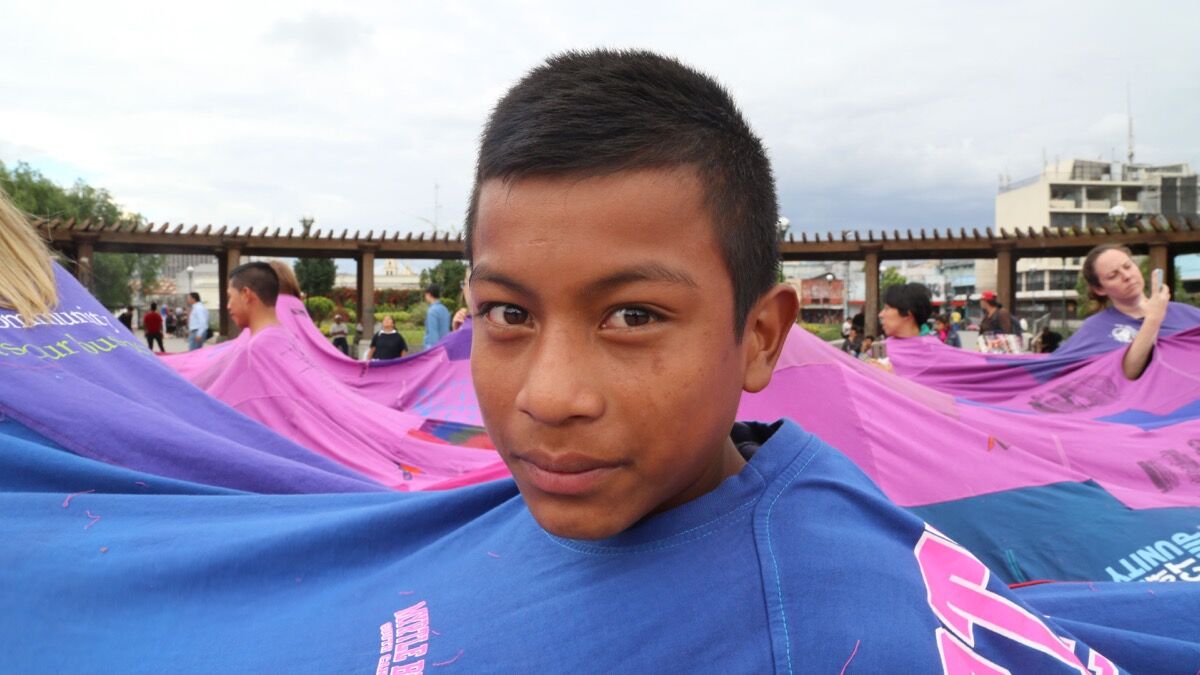 Not every artist who creates work about the border engages with it directly, however. Mexico-based artist
Pia Camil
’s piece Divisor Pirata updates Brazilian artist
Lygia Pape
’s 1968 work Divisor with the subtext of illicit commercial traffic. Camil’s multi-person garment is made from thrift store t-shirts sewn together, purchased in bulk at outdoor markets known in Mexico as tianguis de paca.
“The paca industry is problematic because a lot of it is contraband,” Camil explains. “Most of the clothing is made in Mexico, to be sold to the U.S., that then gets donated to the Salvation Army or Goodwill. Then Mexican vendors buy it from those places and bring it back to Mexico illegally, transported in buses or trailers, like drug contraband.” Camil first included the piece in a street performance in Guatemala, and will exhibit a version of it at her upcoming show at the Texas museum Dallas Contemporary.
The border is not only the site of more ephemeral works; it’s also the location of regular cultural events. Begun in 2006 by artists and curators Ed Gomez and Luis G. Hernandez, the MexiCali Biennial is centered on the border area of Calexico-Mexicali, shifting the focus from the more art-saturated Tijuana region.
“The first one was really about bringing artists from L.A. and having them physically cross the border with their artwork, installing it in Mexicali, and having to experience that whole process of customs, having their stuff looked over, interrogated,” Gomez explains. Projects included Transborder (2009/10), a transborder soccer match presented by the collective Homeless. 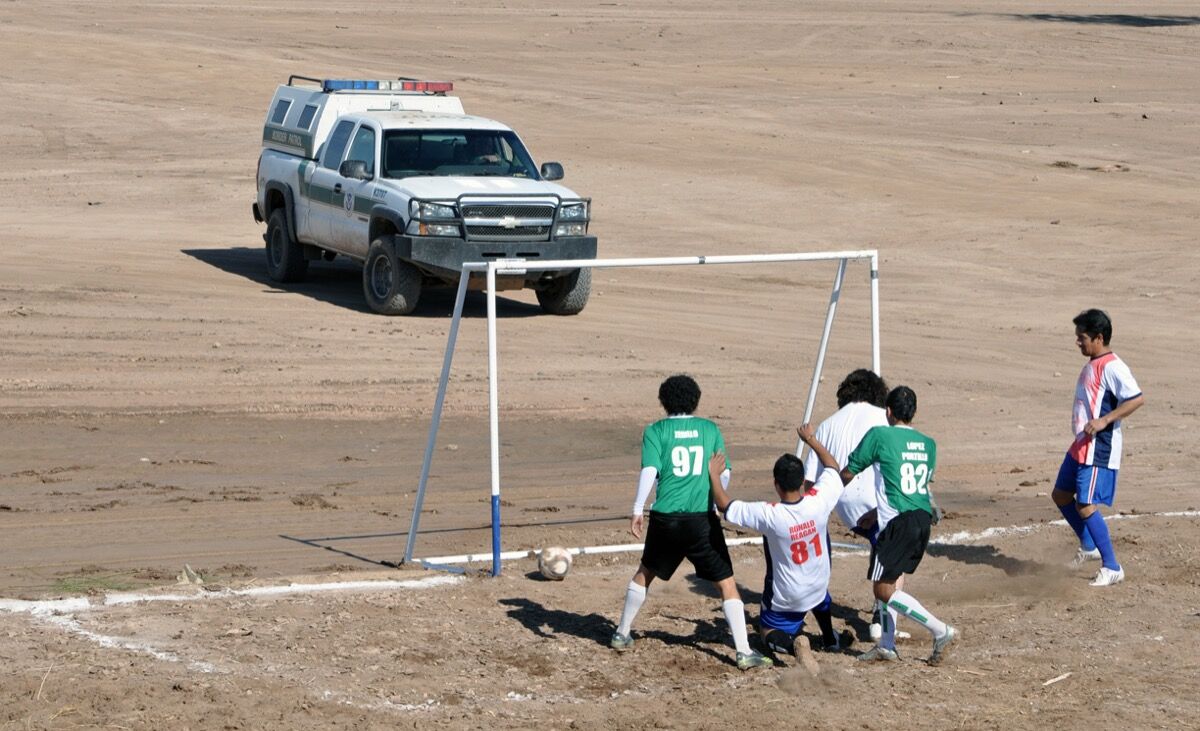 If Trump’s border wall ever comes to fruition, it will clearly be more symbolic than functional, an impotent sign that represents restrictive and violent forms of legislation and policy. What it won’t account for are the invisible ties that bind the people, communities, and economies of two neighboring nations.
“The wall is just an effort to try to keep this permeability as limited as possible,” says Camil. “There’s a natural relation that happens from a personal level to a more large-scale economic level. I don’t know if you can stop that flow. It’s like water. It’s impossible to go against.”
—Matt Stromberg
Related Stories