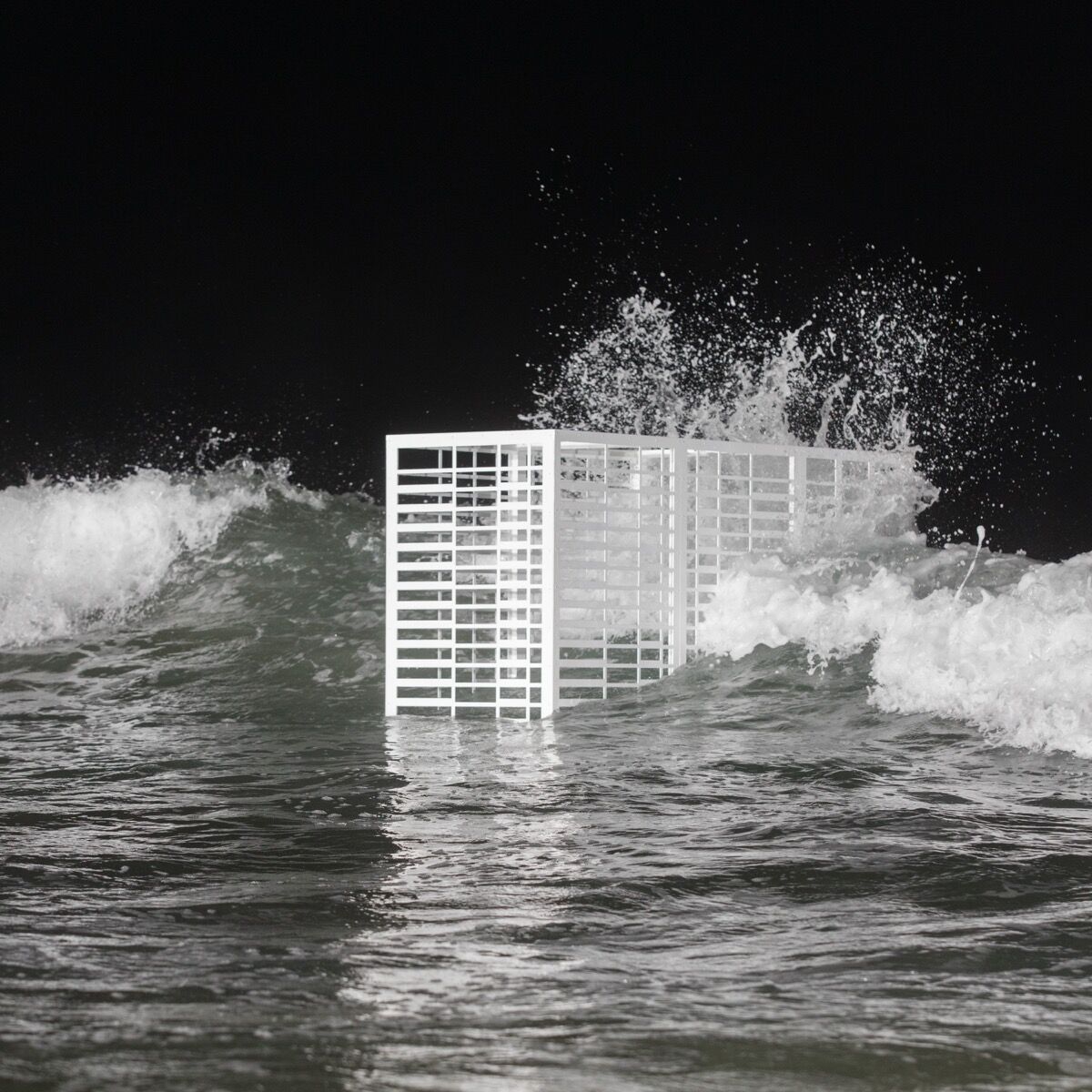 Models for Slow-Moving Luminaries by Lars Jan. Courtesy of the artist and Audemars Piguet. 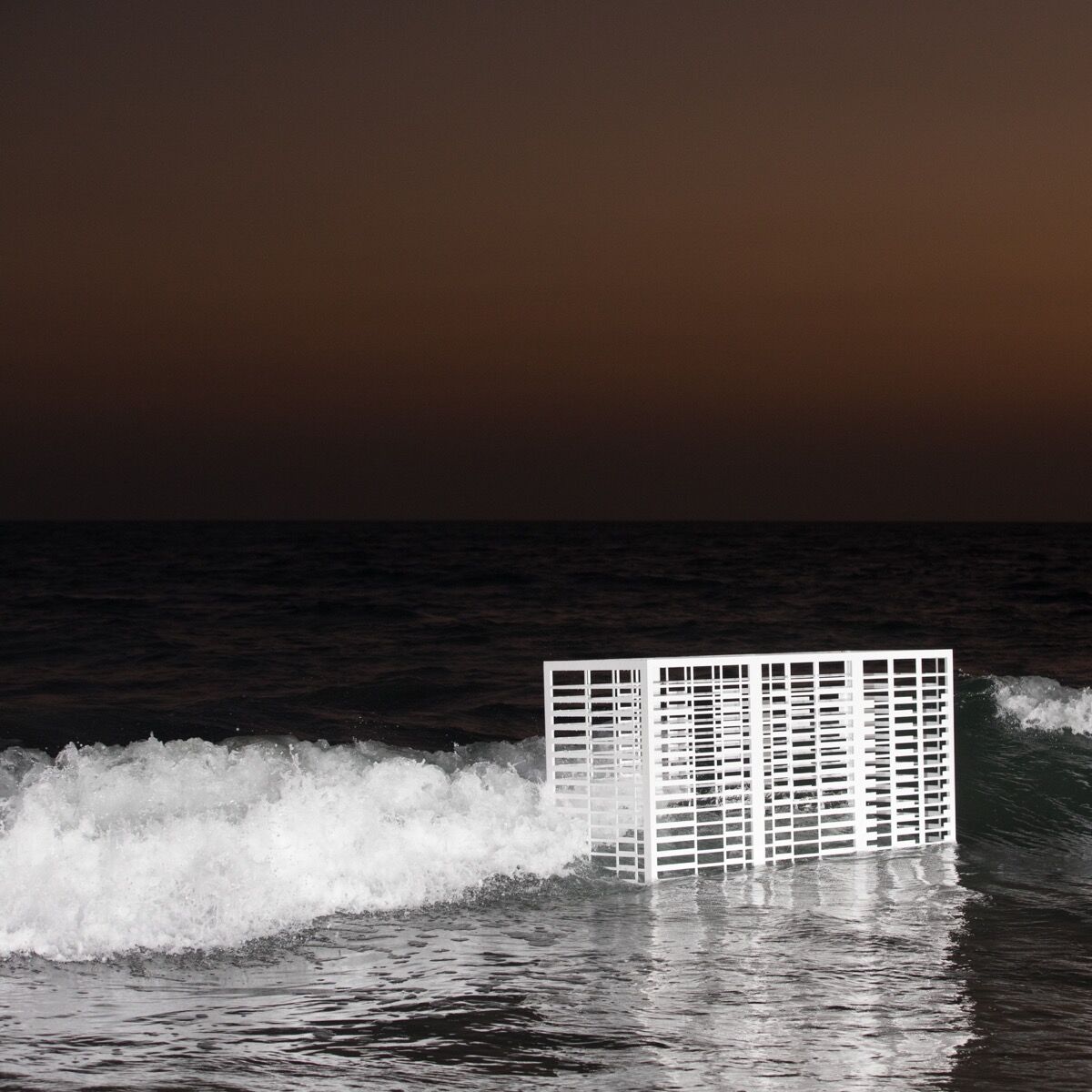 Models for Slow-Moving Luminaries by Lars Jan. Courtesy of the artist and Audemars Piguet.

In 2015, during Art Basel in Miami Beach, a deluge of rain saturated the art world to its core. Instagram feeds showed streets that more closely resembled rivers. As Nick Madigan wrote in the New York Times: “Outdoor exhibitions were canceled or pulled inside; parties in tents were washed out; and well-heeled art patrons in expensive shoes were forced to wade through flooded streets and sidewalks to get to galleries, exhibitions, and parties.”
Artist
Lars Jan
was in the middle of the squall, watching as dancers swam around in his aquarium-like project Holoscenes, an aquatic ballet that suggested how humans may have to adapt into mer-people in order to endure rising sea levels. “There were electrical storms all over the place, and there was flooding,” says Jan, recalling the experience. “It was appropriate.”
Water is a typical material for Jan, and it’s somewhat fitting that I spoke to him on the day that Hurricane Irma was making landfall on Florida, causing sections of Miami to flood. But we were nearly 3,000 miles away, at Jan’s studio in downtown Los Angeles, far from the whipping winds and underwater streets of South Beach. “Miami, after Irma, looks a lot like my concept images,” he says, careful with his words, but aware of the prescience of his vision. 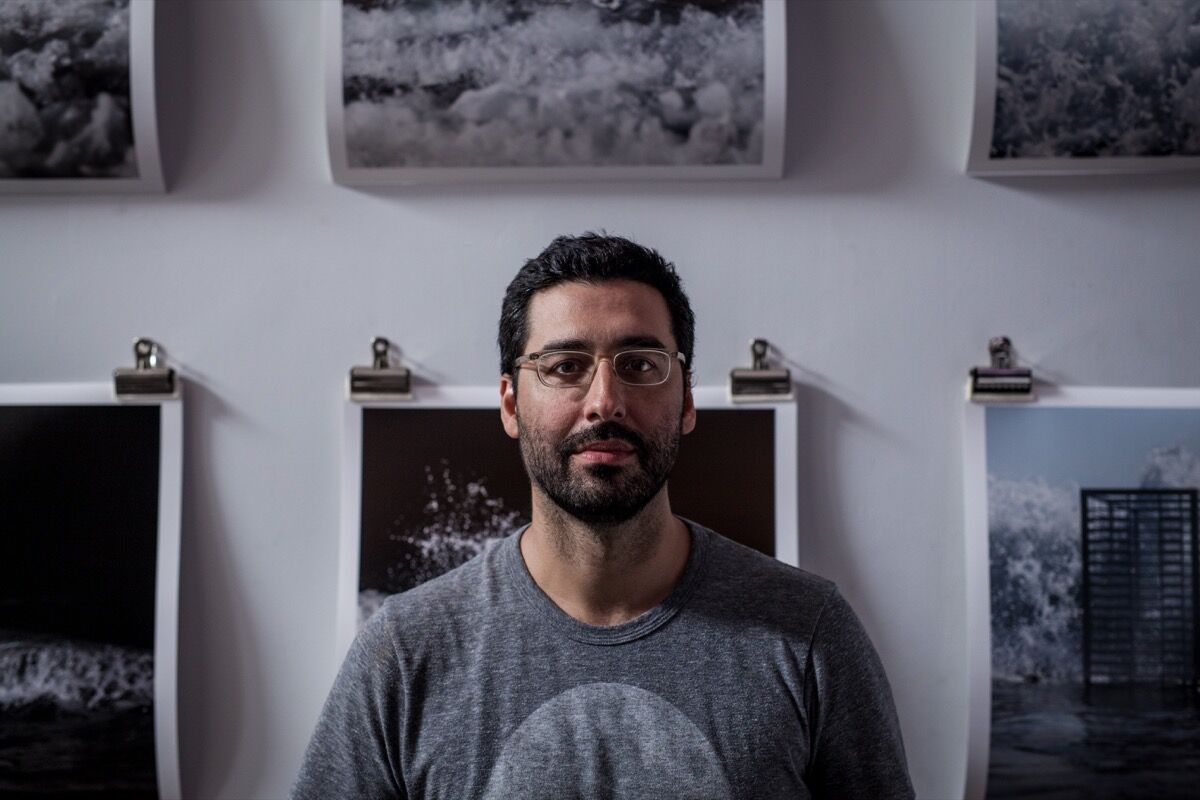 Portrait of Lars Jan. Courtesy of the artist and Audemars Piguet.

The artist is a solid, statuesque man with a mild voice. When I meet him, he’s wearing a t-shirt bearing an image of a squid, and is keen to discuss his latest large-scale installation, Slow-Moving Luminaries. It’s the third commission presented by luxury Swiss watchmakers Audemars Piguet at Art Basel, due to be unveiled on December 6th.
Jan is the founder of Early Morning Opera, which describes itself as “a genre-bending performance and art lab whose works explore emerging technologies, live audiences, and unclassifiable experience.” That’s led to projects like Holoscenes as well as Abacus, a sort of twisted TED Talk-style performance that debuted at the Experimental Media and Performing Arts Center (EMPAC) in Troy, New York, in 2010.
That spirit and energy that initially prompted Kathleen Forde, the curator for this year’s Audemars Piguet Art Commission, to put Jan forward as a nominee for the commission. Forde (who had actually worked with Jan during EMPAC’s presentation of Abacus) tells me she self-identifies as a time-based arts curator. She connects Jan’s work to Audemars Piguet’s guidelines for the commission: that the artist be able to portray the “tension between tradition and innovation.”
“Jan is absolutely that person,” says Forde. “He’s using incredibly complicated technology. Though his strategies are forward-thinking, there isn’t a conversation he has where he’s not referencing art-historical and philosophical traditions. Slow-Moving Luminaries is referencing everything from Angkor Wat to Japanese temples to labyrinths to meditation paths to maritime symbols and California minimalist light artists.” 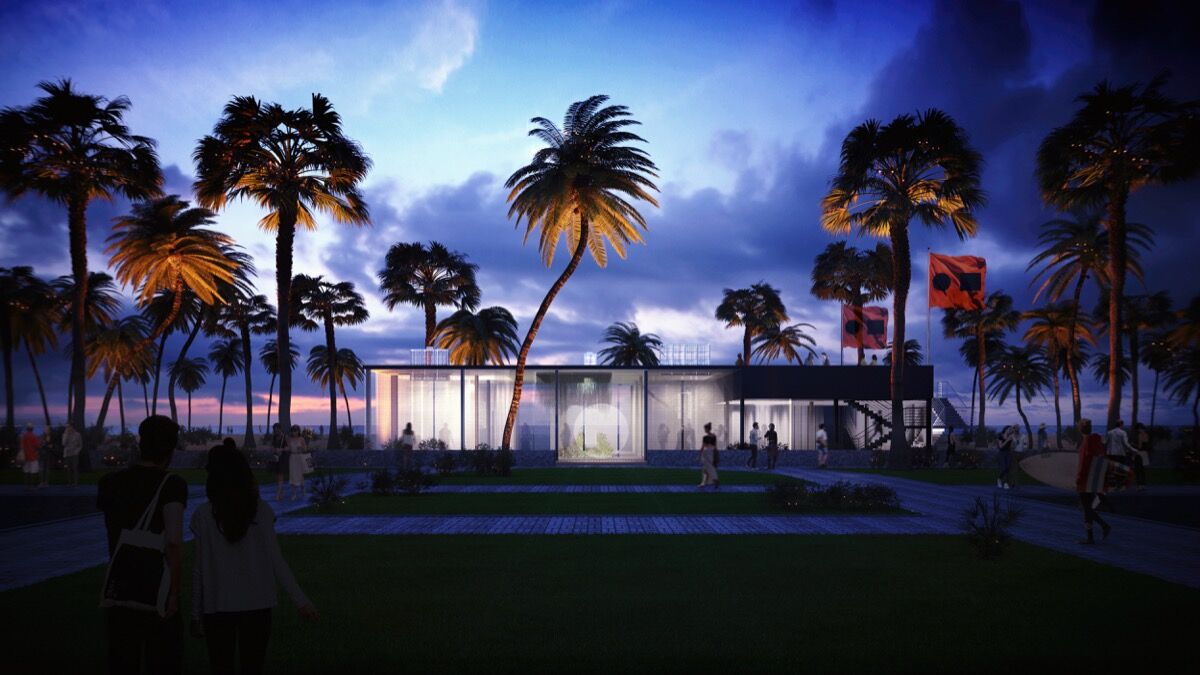 Advertisement
Back in his Los Angeles studio, Jan explains the mechanics of the work for Miami, which will unfold through a two-story pavilion. Viewers will enter the first deck through a labyrinth, surrounded by scrim-like fabric; as they walk, the semi-transparent layers veil kinetic buildings, dipping down from holes in the ceiling. In the center, a garden (partly inspired by
Henri Rousseau
’s jungle paintings) leads to a hallway where lightboxes show images of the husk of a building floating in the surf.
“And then you go up a set of stairs to a viewing platform,” explains Jan, painting a picture of the as-yet-unrealized work. “Once you get to the top, there are lounge chairs and umbrellas; sometimes, there’ll be a bar. It’ll feel like you’re on a pool deck, or on the back of a yacht, but if you look back over the installation [you’ll see that] three-quarters of the roof is covered in four inches of water. The buildings rise and sink through the apertures—sometimes you don’t see any, sometimes you just see one or two, but they’re always in motion. When they’re illuminated at night, you see their reflections in the water.”
Framing the installation itself is the luxury landscape of South Beach, including the W Hotel and the 1 Hotel, which look an awful lot like the buildings bobbing in Jan’s pool. It’s not a coincidence: The design of Slow-Moving Luminaries is based on photographs Jan took of the surrounding area—portending a possible underwater future for the extravagant architecture of Miami Beach.
Astute viewers, looking down on the piece, will also realize that white tiles tracing the labyrinthine path they’ve just walked spell out a simple message: S.O.S. 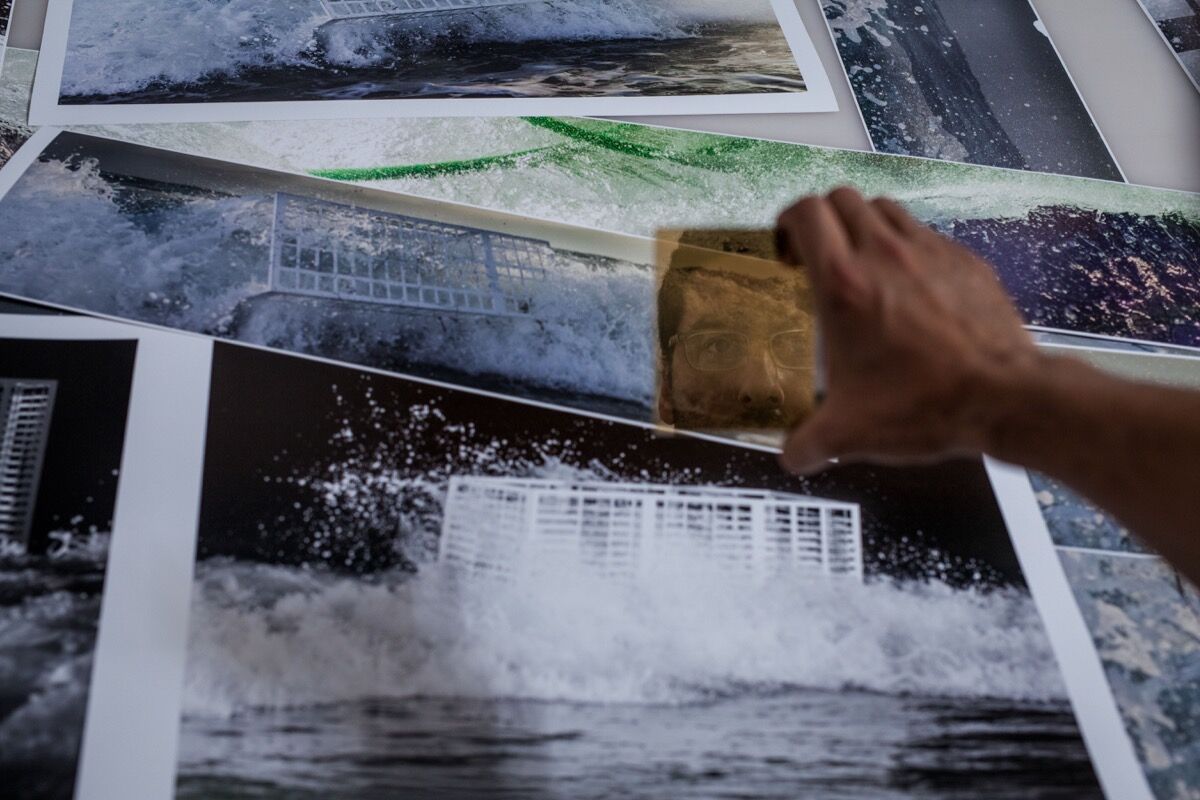 Lars Jan selects images that will appear in lightboxes within the Slow-Moving Luminaries installation. Courtesy of the artist and Audemars Piguet.

Jan jokes that his sense of foreboding about the rising sea comes from a very Freudian place. The artist grew up on a peninsula jutting out into the Atlantic off of Marshfield, Massachusetts, a small town where lobstermen with rusty trucks would drive along the brackish coast. On stormy days water would flood around his family’s raised house. (Recently, Jan’s mother saw the ecological writing on the wall, and sold her house after two consecutive years of flooding.)
“I think it’s part of growing up on the ocean,” he says about his obsession with the clash between the human and the marine. “I’m slightly phobic of deep water. Holoscenes was definitely a connection to that fear, because one of the things that affected me was seeing lots of images of bodies in floods. I had a particularly visceral response.”
Those anxieties have found a very topical home in southern Florida. “Miami’s precarious position is something that’s really important to the project. The city is really the edge of the future, because here it’s totally the present. Everyone thinks it’s in 50 years, it’ll affect their grandchildren, but in Miami, it’s completely now.”
Jan thinks of his latest project as being very much a time-based proposition—whether that involves the urgency of climate change, the speed with which a viewer passes through the pavilion, or the way the shadows move across the buildings on the top deck. Hence the “slow-moving” part of the work’s title: There will be intentional space for reflection and contemplation.
“It’s referencing, in part, a Zen temple that I used to live near in Kyoto, which had these two windows, the window of confusion and the window of enlightenment,” says Jan. “So it’s thinking about gazing through an aperture in that tradition versus looking at the mirror and being consumed with one’s reflection. There’s a little bit of a dark irony in the project.” 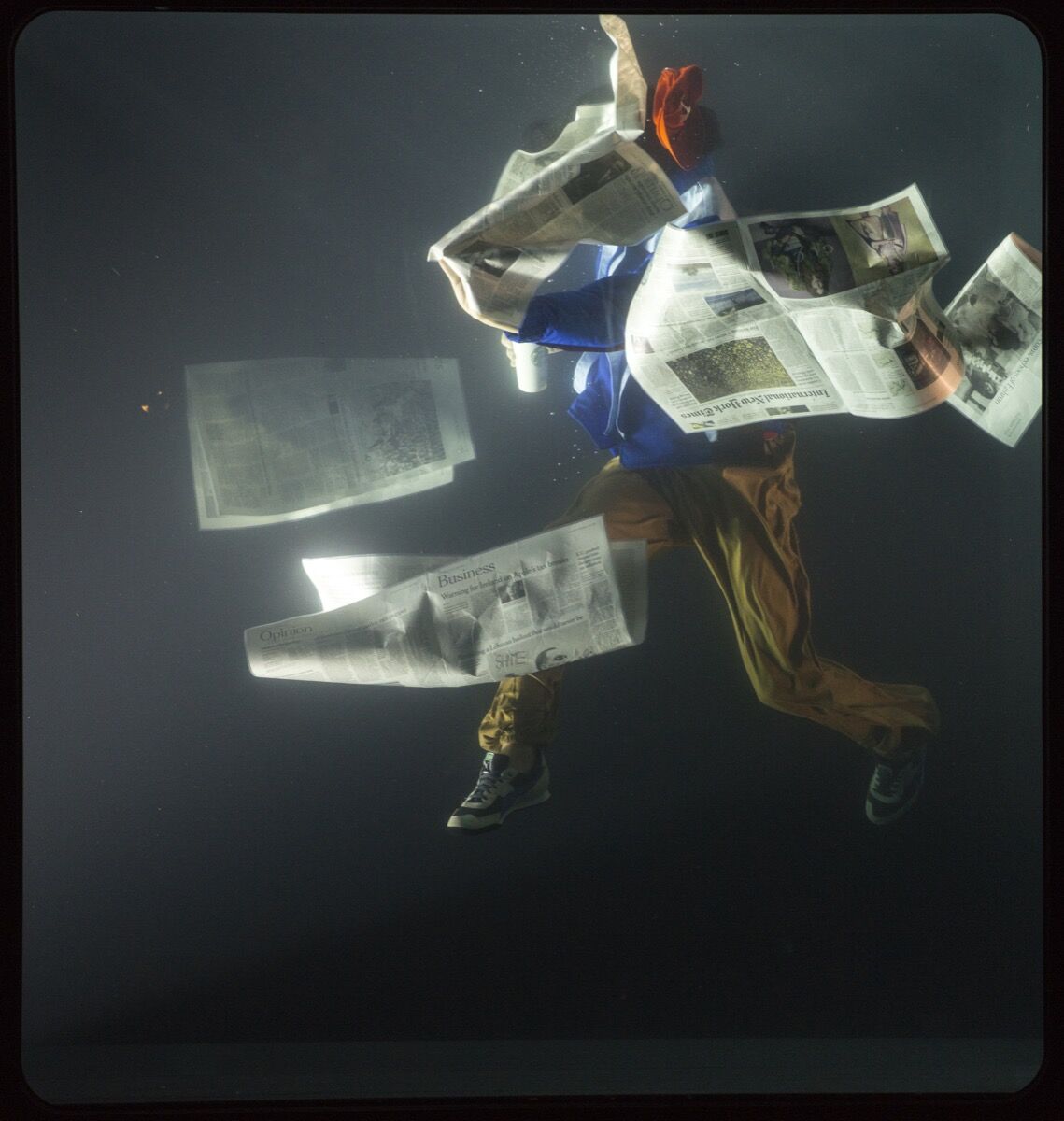 Lars Jan, Holoscenes, 2014. Courtesy of the artist and Audemars Piguet. 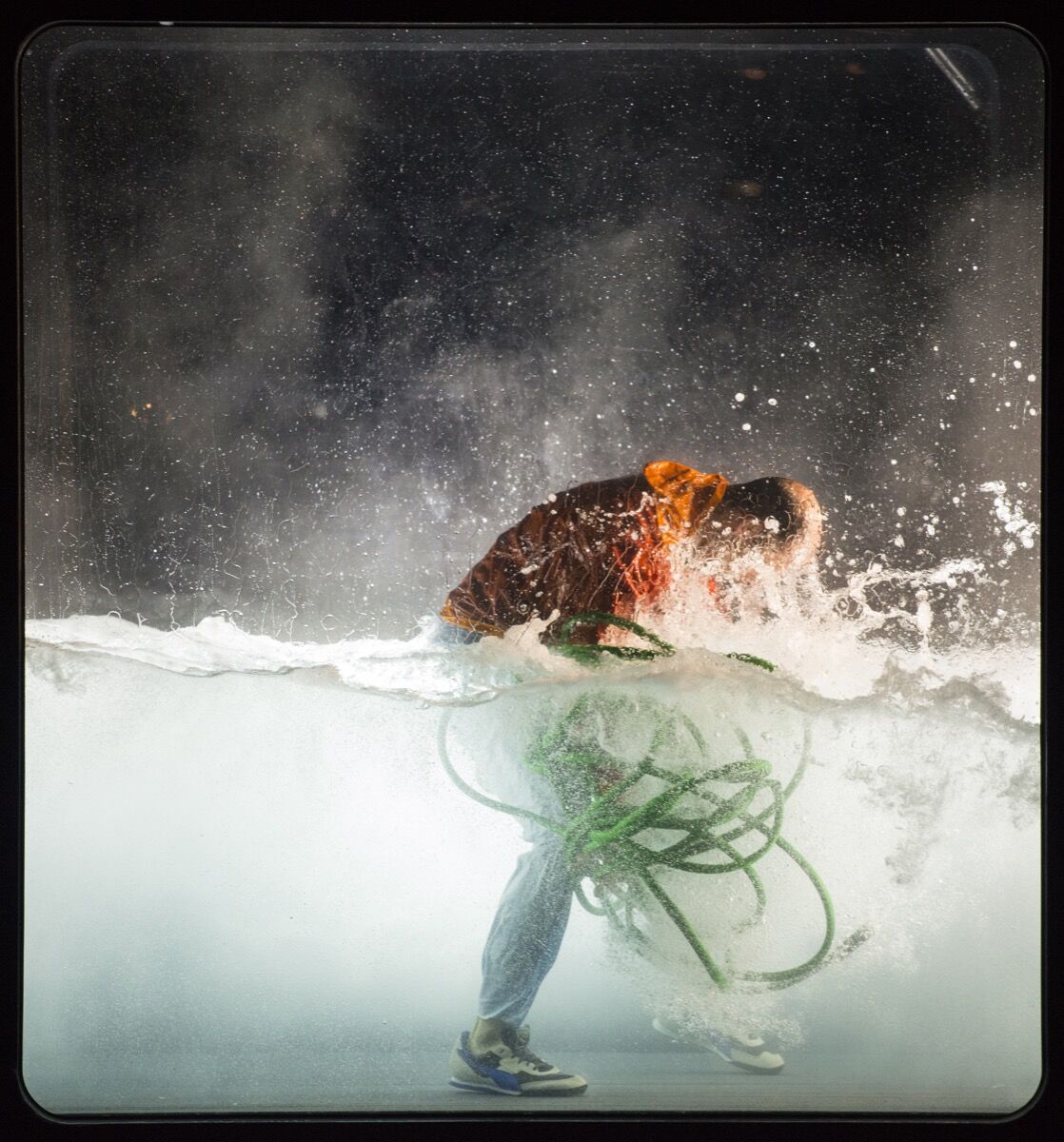 Lars Jan, Holoscenes, 2014. Courtesy of the artist and Audemars Piguet.

Integral moments of the commission also arose from a visit to Audemars Piguet’s factory in Le Brassus, Switzerland, where the artist became obsessed with the actions within the gears of the brand’s watches. That intricacy is mirrored, somewhat, in Slow-Moving Luminaries.
“The five buildings are all networked and synchronized according to an algorithm,” says Jan. “So it's all-moving, all the time. I'm excited about the movement of the sun, the shadows, the movement of the buildings, the movement of the wind on these scrim fabrics. It's going to be a very alive space.”
And it fits perfectly with the other guideline set forth by Audemars Piguet: that the project be both precise and complex.
Though the project fits with Jan’s career in many ways, perhaps the biggest difference Slow-Moving Luminaries affords the artist involves the activation of the space itself. In Holoscenes and his more theatrical work, the line between audiences and performers was clear cut. Here, Jan sees the spectators as operating within the performative realm, even simply by the act of walking through the maze, or pausing in the Zen-inspired spaces.
“I’m interested in creating an environment that is supportive” of contemplation, he says. “When I’m looking at work, the most valuable thoughts I have are when I’m moving through space. When I was younger I drove across the United States seven times; I just loved driving in the West, having uninterrupted, long thoughts.” 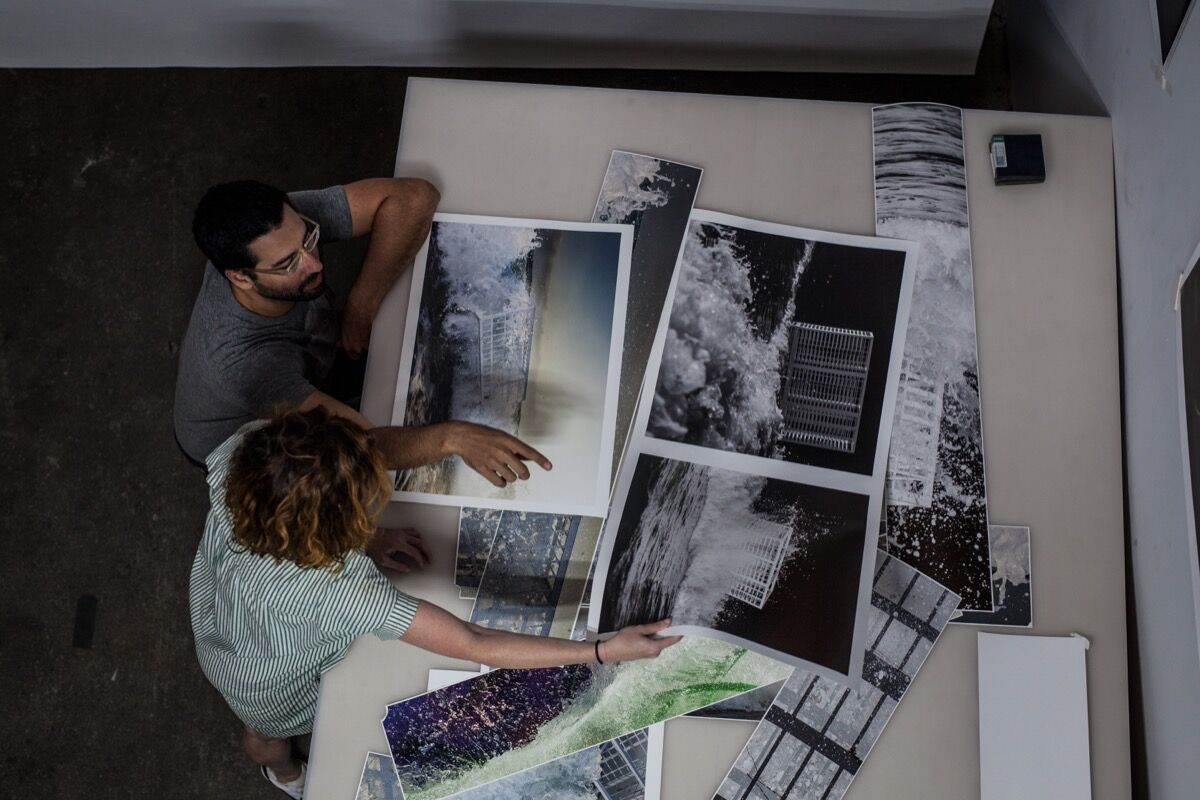 Lars Jan and Kathleen Forde select images that will appear in lightboxes within the Slow-Moving Luminaries installation. Courtesy of the artist and Audemars Piguet.

The kinetic movement of the Audemars Piguet commission (and the meandering, introspective path of its viewers) covers the “slow-moving” part of the work’s title, but what about “luminaries”?
“In a 19th-century sense, ‘luminary’ refers to the study of the sun and the moon, the most important celestial bodies,” Jan explains. “The sun and the moon were the ‘slow-moving luminaries,’ because the orbits were much tighter. And I think what we’ve been talking about contextually is that people don’t like to think of themselves as slow-moving. The whole idea of a luminary is a forward-thinker, and in our contemporary culture, someone who is almost a futurist. The biosphere moves at a slowed-down pace, but it is now accelerated. The question is now, ‘What rhythm are we operating at? Can we accelerate our perceptive capacity and decision-making capabilities to match a shift in these longer-term patterns?’”
As to whether humanity can actually achieve these necessary adjustments, Jan is neither optimistic nor pessimistic. “I really believe in the pendulum swings,” he says, pondering the future. “There’s unquestionably optimism within the work, too. I have to feel that way for myself: I have a five-year old.”
Maxwell Williams
Related Stories