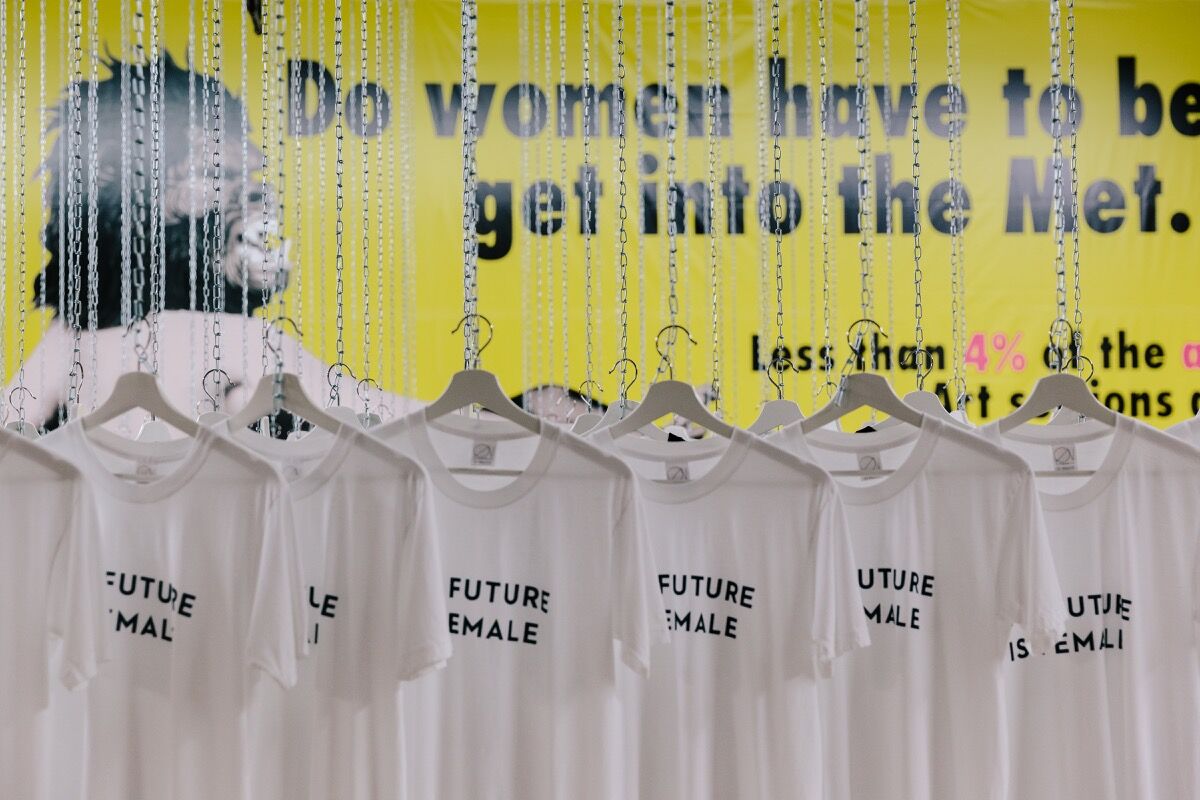 I rolled up to Fair.—somewhat confusingly billed as an “alternative, non-commercial art fair,” featuring all women artists—intent on buying feminist trinkets and t-shirts for the people on my holiday gift list from the event’s “Fair Market.”
The point could not have sailed past me any more cleanly if it tried.
Despite being located Brickell City Centre, in one of Miami’s glitziest shopping malls—one passes Saks Fifth Avenue, a Parisian spa, and the high-end menswear store Kiton on the escalator up to Fair Market—Fair. is serious about its “non-commercial” status. Absolutely nothing is for sale, not even the feminist t-shirts hanging from racks in the Market section.
“We didn’t want it be a space where objects were exchanged, but rather where ideas were exchanged,” said Zoe Lukov, the fair’s director. 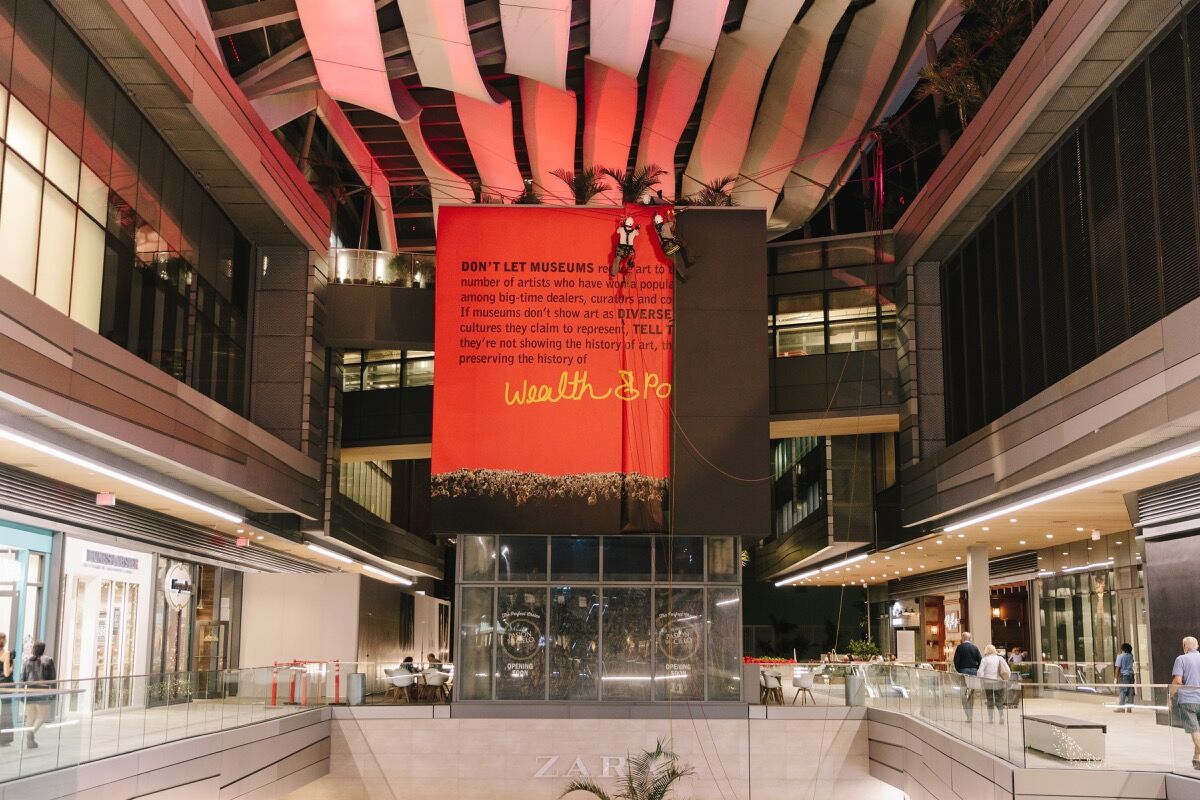 Fair. arrives at a time when many female artists’ markets are gathering momentum as museums, commercial galleries, and fairs look back across art history to identify overlooked artists, many of whom are women and people of color, and making proactive efforts to diversify their programming (not to mention their own staff demographics).
Produced by Anthony Spinello, of Miami-based Spinello Projects, Fair. showcases a mix of artists from different places, backgrounds, and generations—from the 32-year-old Taja Lindley to the
Guerrilla Girls
, active since 1985, who finally receive their first Miami exhibition. It includes two other sections: Fair Trade, a number of public works and live performances taking place around the mall, and Fair Play, a video program curated by Los Angeles artist Micol Hebron and presented with The Femmes’ Video Art Festival at the mall’s movie theater.
On Thursday afternoon, shortly after it opened to the public, last-minute elements were still coming together. One of four Guerrilla Girls banners was still being hung above the sushi restaurant across from Fair.’s entrance, and one of the works intended to go in the elevators hadn’t yet been installed. But Fair. already seemed to be having its intended effect on visitors, some of them shoppers who wandered in out of curiosity, and others, like Nestor Rodriguez and Nelson Brito, both visual arts undergraduate students at New World School of the Arts, who had shown up on purpose.
“These pieces are very strong,” said Brito, who said he and Rodriguez were sent by their professors and would be analyzing the works they saw for an assignment. “They talk about women nowadays, the stereotypes. It makes me think differently.” He was particularly taken by Micol Hebron’s Gallery Tally (2013–present), a selection of 160 posters (out of 560 produced so far) bearing the names of galleries and the gender breakdown of their rosters; the artist crowdsourced the work’s designs from around the world. 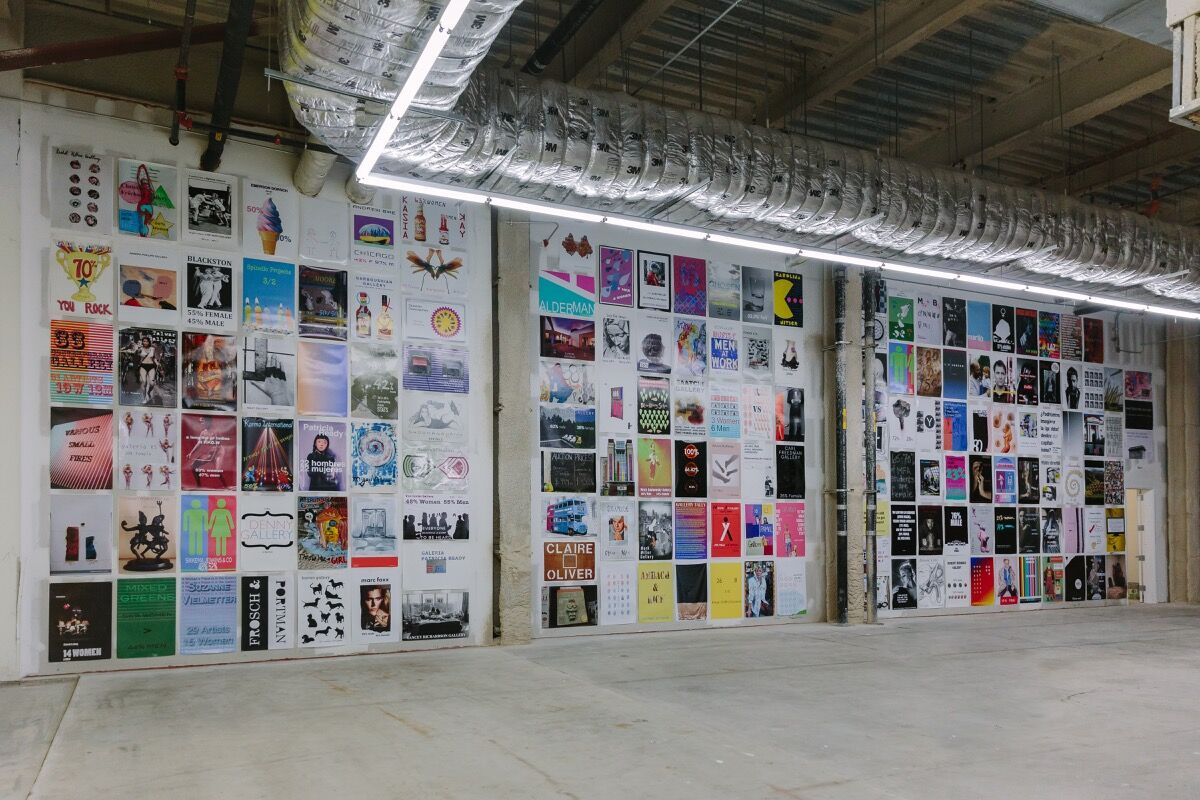 Advertisement
Brooklyn-based artist Taja Lindley’s work, This Ain’t a Eulogy: A Ritual for Re-Membering (2017), arose out of a conversation with a group of young women from the Lower East Side with whom she worked with as part of the Sadie Nash Leadership Project, about the deaths of Michael Brown and Eric Garner, and the decisions to not charge the police officers involved. It features a wall of black plastic garbage bags, with over 200 of them bearing the handwritten names of the unarmed black men and women killed in police-involved shootings since 1999.
Showing at Fair., she said, skirted “awkward” questions about the ethics of selling the piece, which came up when she showed it in a commercial setting at the Spring/Break Art Show during Armory Week in New York.
“I really appreciate being a part of a show, during a very commercial time, and to be able to show work that’s not up for sale,” Lindley said. “This isn’t going in someone’s private collection. And honestly I don’t know how I feel about parting with the names…because [it’s] my labor, my hands—I sat with people’s stories as I painted them.”
Lindley added that participating in an all-women fair reinforced the context of her work, rooted in the #BlackLivesMatter movement, which she noted is largely led by black women.
“I see my work as part of a long legacy of a black feminist practice for racial justice,” she said. “While it's not directly addressed in the piece, This Ain’t A Eulogy is made possible” thanks to the labor of these women, she said. 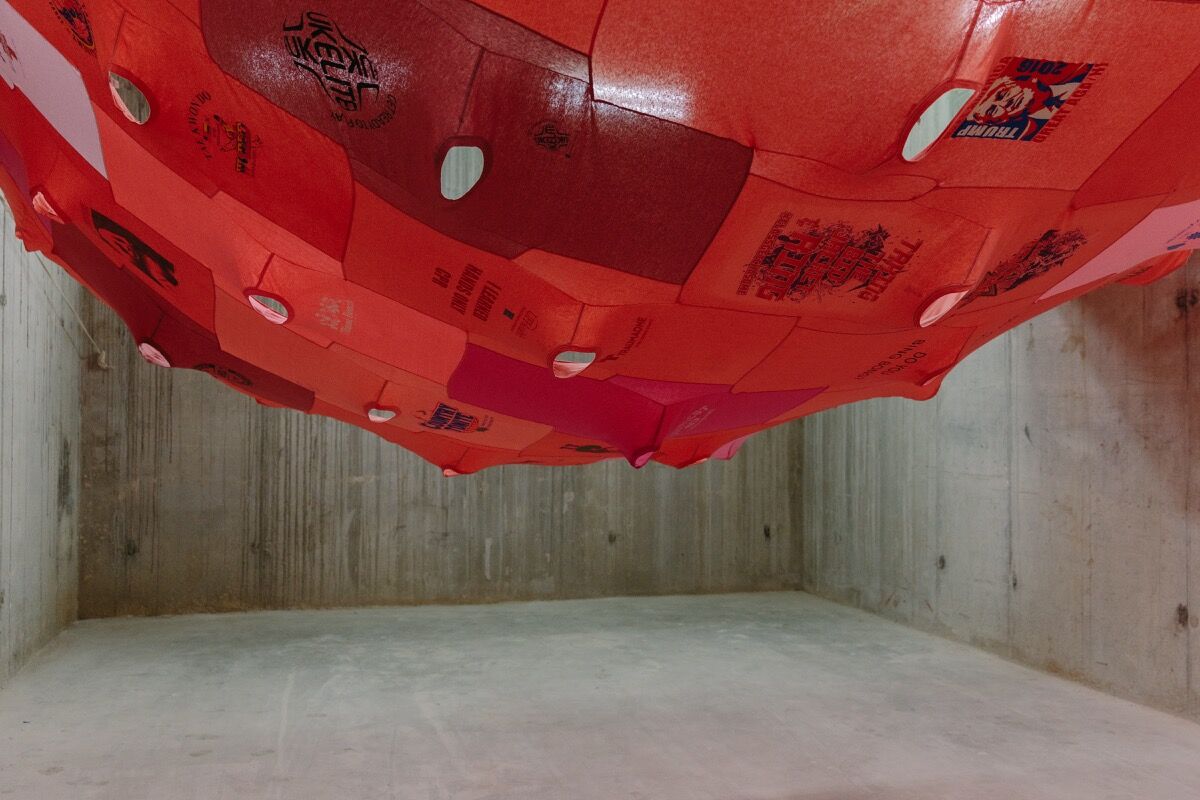 But the non-commercial aspect of Fair. does raise the question of how it helps materially correct gender-based wage imbalances in the art industry (famously highlighted by the Guerrilla Girls), even as works by female artists at Art Basel in Miami Beach across town were selling for the mid- to high six figures (although—to Fair.’s point—that’s a fraction of the multi-million-dollar sales notched by their male peers).
“I don’t think there’s anything wrong with galleries making sales, and I don’t think there’s anything wrong with women selling their work,” said Lukov. “I think this conversation is about that, actually. How does capital move and how does it change hands, and whose hands is it going to?”
Indeed, several of the works address these questions head-on, such as
Nathalie Alfonso
’s work Cleaning the Line, for which she spends four days hand-drawing a long, thick line in charcoal along a white wall, then erasing it by hand, making visible the unpaid work that women do.
Alex Colley Hart, who was visiting Miami from Indianapolis, Indiana, where he works as a stockbroker and a part-time curator, said he loved the non-commercial nature of the fair, and its focus on women.
“I wish more fairs and art organizations actively thought about women and how they contribute to the art market,” he said. “I wonder how the artists are getting paid, but my thinking is, maybe compensation isn’t their primary motive here, it’s to showcase the great work women are making, so it’s more of a political statement rather than a commercial endeavor.” 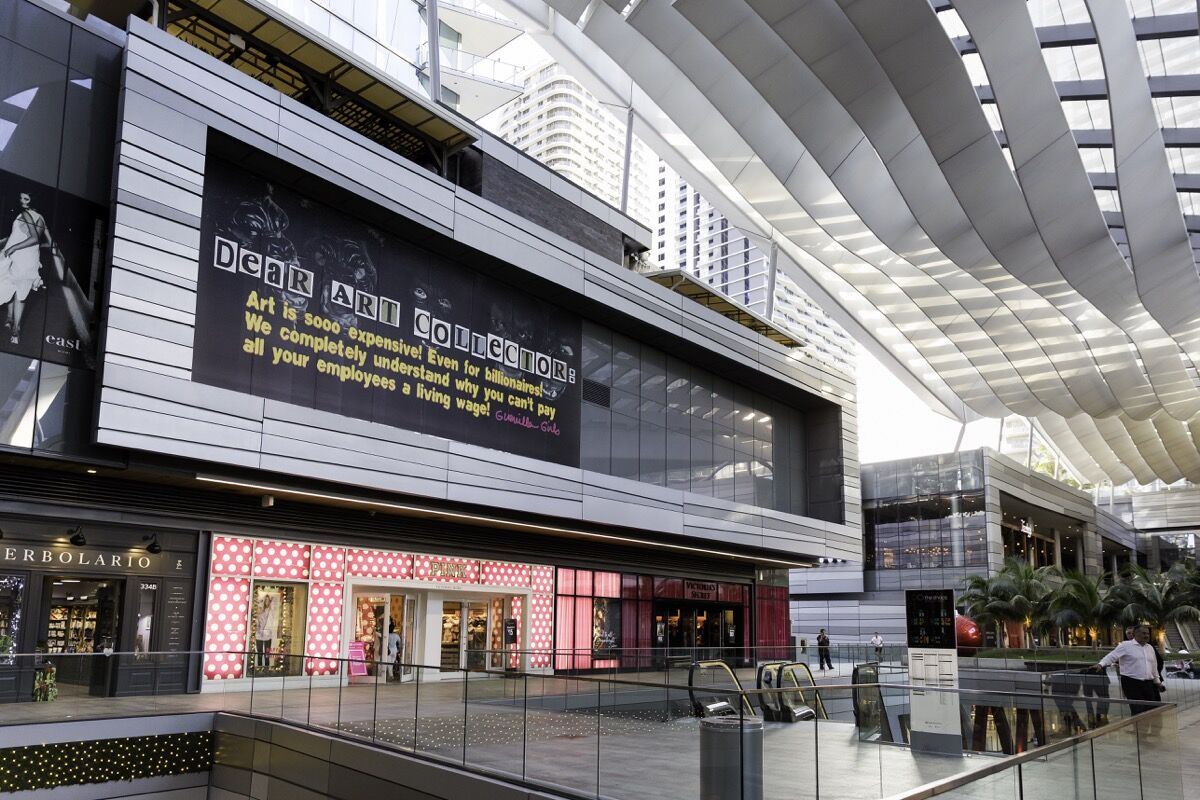 The budget (Lukov declined to disclose it publicly) was provided by sponsor Swire Properties Inc., in partnership with the John S. and James L. Knight Foundation. Lukov said she offered the participating artists small honoraria based on the guidelines established by artist activist group Working Artists and the Greater Economy, or W.A.G.E. The space was provided by Swire, the developer of Brickell City Centre, and other aspects such as the food and beverages for the opening reception were provided in kind.
She acknowledged the irony of offering small honoraria to artists she knew were “worth much, much more,” but hopes to be in a position to be able to pay them more in the future.
Marieka Heinlen, an illustrator visiting from St. Paul, Minnesota, was keen on the idea of an all-women show that was a non-commercial alternative to the big fairs happening in the rest of Miami. She said Cheryl Pope’s A Silent I (2011), sports-championship-style banners bearing phrases drawn from workshops she conducted with high school students (such as “I give more than I take” and “It’s never about me”), had resonated with her.
“It’s women’s voices to themselves, basically, the things you say to yourself,” Heinlen said. “Right now it feels relevant that women’s voices are supporting each other.”
Anna Louie Sussman
Correction:
A previous version of this article mistakenly stated that the officers involved in the killings of Michael Brown and Eric Garner were acquitted, a term that only applies to cases that have been brought to trial; they were not indicted for the killings. It has been updated to state that no charges were brought against them.
Related Stories