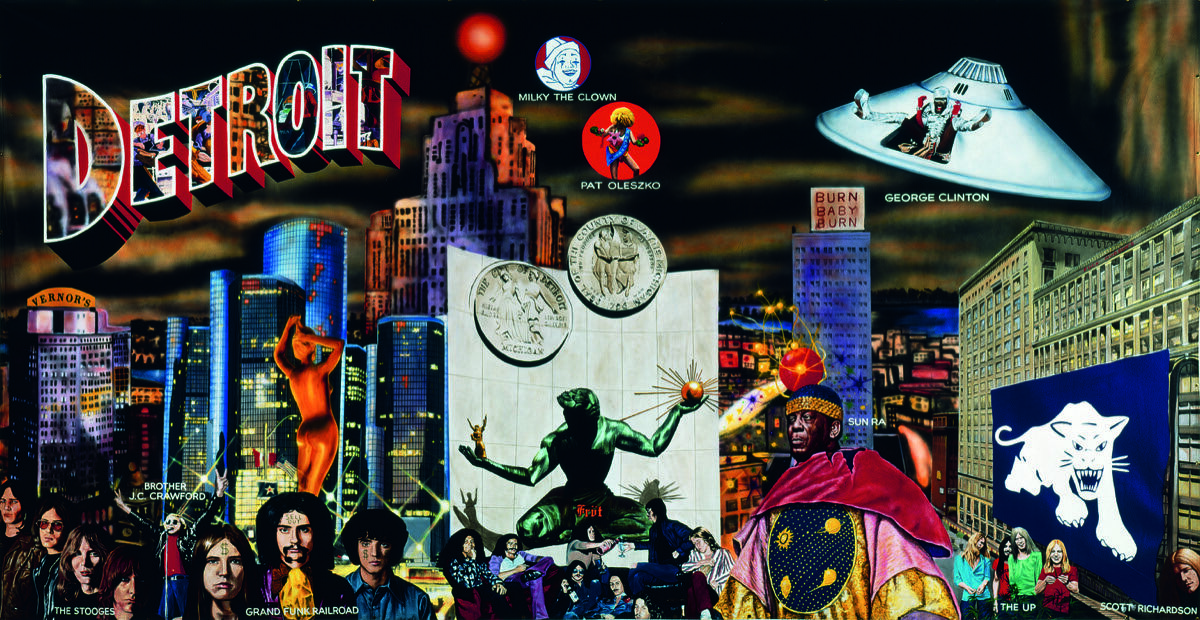 Jim Shaw
and the late
Mike Kelley
have fully cemented their reputations as the quintessential Los Angeles artists of the postmodern era. Kelley left his mark with stuffed-animal assemblages, perverse but literate performances, and bling-encrusted “Memory Ware,” while Shaw continues to astound with dream-sourced drawings, paintings and sculptures, as well as an entire invented religion (dubbed Oism), and increasingly complex allegorical installations.
Right now, you can see their work just about everywhere, on both coasts—Kelley’s “Kandor” series at Hauser & Wirth in L.A.; Shaw at the Marciano Art Foundation’s revamped Wilshire Boulevard Masonic Temple and at Metro Pictures, where the allegories include a series of black-and-white renderings of a hurricane composed from grotesquely distorted faces of our current President.
But the most historically significant gathering of works by these two this season is neither east nor west, but smack dab in the middle. “Michigan Stories: Mike Kelley and Jim Shaw,” on view through Feb. 25th at the MSU Broad Art Museum at Michigan State University in East Lansing. While East Lansing—90 miles northwest of Detroit—is not on many art tourist top 10 destination lists, maybe it should be. With a $28 million endowment from MSU alum Eli Broad, a
Cubist
architectural showpiece by
Zaha Hadid,
internationally renowned curator Marc-Olivier Wahler as director, and a 3½-star Marriott hotel a mile from campus, you’d be crazy not to check it out! 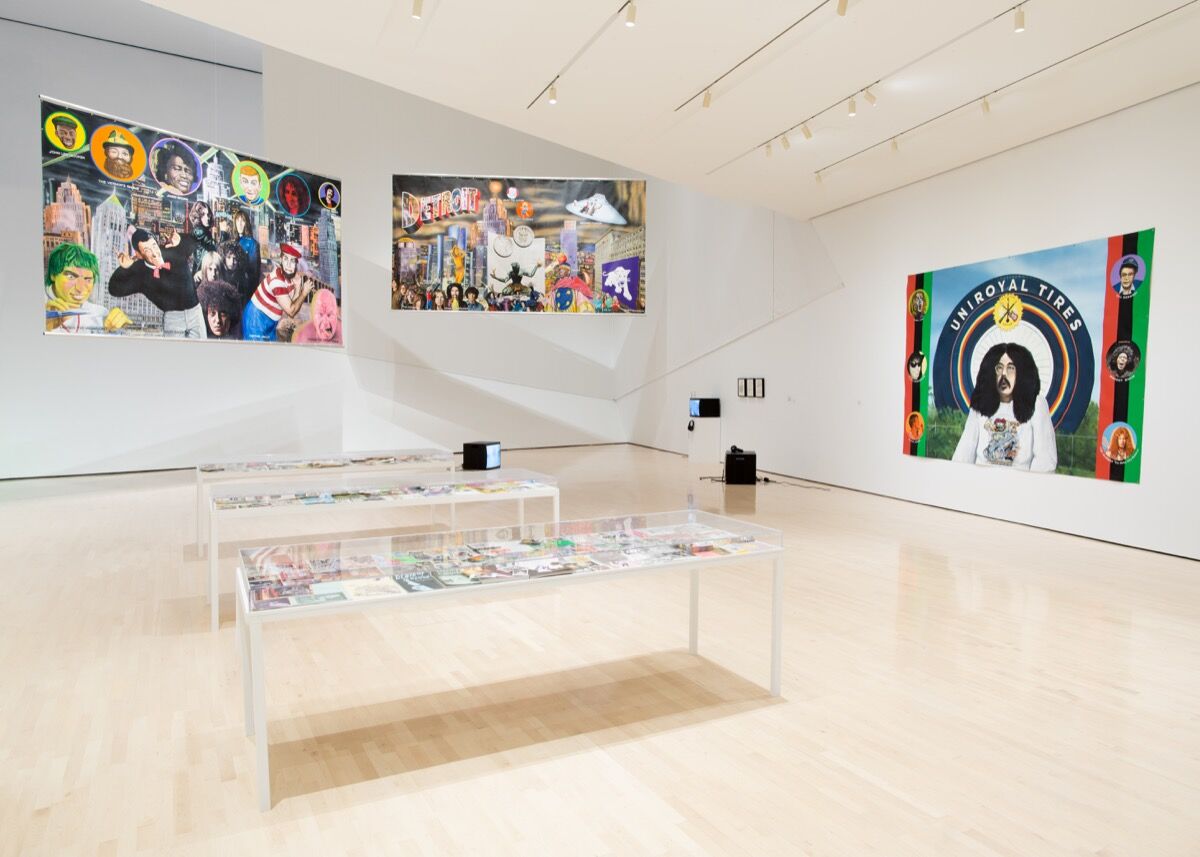 “Michigan Stories” explores the formative Midwestern years before the duo migrated west. Kelley’s working-class Catholic upbringing in the Detroit suburb of Westland provided fodder for much of his later work, including the posthumously realized Mobile Homestead, a replica of his childhood home, now permanently installed as a public cultural center in downtown Detroit. Shaw grew up with three older sisters in the more northerly Dow Chemical factory town of Midland.
After the social disintegration following the 1967 Detroit riots, Michigan’s underground culture experienced a foreshadowing of the gritty and desperate urban energy that would soon emerge as punk, complete with a voracious appetite for lower-class vernacular visual culture. But it wasn’t enough: “Leaving Michigan was something you just did,” recalls Shaw. “Why would you stay? There were no jobs, there was no art world.”
Prior to that momentous journey, though, Shaw and Kelley—along with filmmaker Cary Loren and singer/artist Lynn Rovner (a.k.a. Niagara)— formed the proto-punk experimental noise band Destroy All Monsters (DAM), which recorded hours of effects-laden bleats, squawks, and tape loops and published a series of art-damaged zines. At the same time, the DAM collective—most of whom were attending art school at the University of Michigan in Ann Arbor—were producing comparatively traditional paintings, drawings, collages, and sculptures.
“Mike disowned a lot of his early work,” Shaw remembers. “But I’m sure some will come out of the woodwork, because he left a lot of it in the back yard. We just left shit in our Ann Arbor house when we moved to Los Angeles. All these oil paintings and ceramics. Mike only took works on paper. Literally, the back yard was knee deep in stuff.” 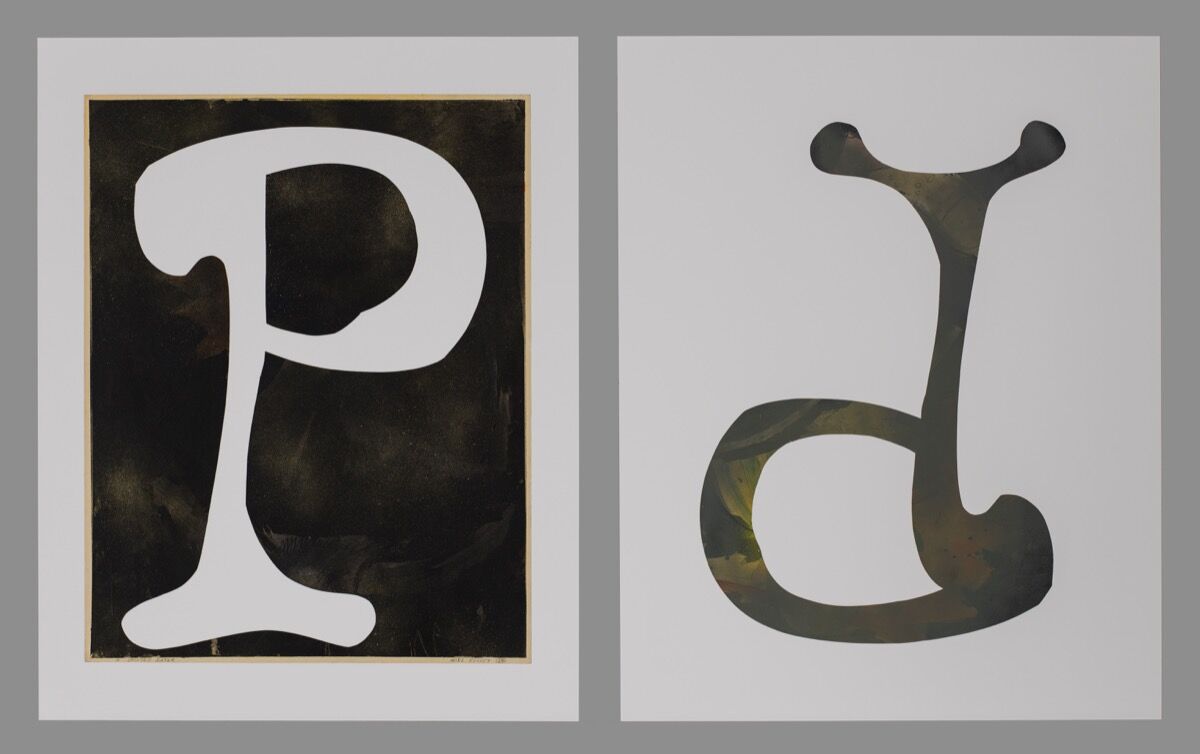 Advertisement
Among the portable works that were preserved are Kelley’s remarkable “allegorical drawings”—a sort of one-man exquisite corpse experiment that pays homage to Chicago art collective The Hairy Who, underground comix, and MAD artist Basil Wolverton.
A lot of this protean work would remain important to the artists. Decades later, in the 21st century, both Shaw and Kelley would revisit the archive of their surviving undergraduate oeuvres—adding onto or reconfiguring student paintings with the same anthropological perversity they had applied to deconstructed felt church banners or Famous Monsters of Filmland magazine imagery.
While “Michigan Stories” gathers as many of these archival treasures as it can, the most substantial components date from after the Midwestern exodus, and reflect both artists’ penchant for mythologizing their autobiographical roots. Chief among these fictionalized reminiscences are the selections from Shaw’s “My Mirage” project—an epic avant-garde graphic narrative that follows an archetypal teenager named Billy and his coming of age in the 1960s and early-’70s Michigan counterculture. Comprised of over 150 unique interrelated artifacts—mostly 17-by-14 inch format drawings and paintings—“My Mirage” follows Billy from geekish adolescence through psychedelic hipsterism, then deep into the forgotten subculture of the Jesus Freaks.
“Part of the reason I did ‘My Mirage’,” Shaw remembers, “was to trace some of the beginnings of the Born Again movement—which hit certain aspects of my group pretty hard. It was such a weird vestige of the 1960s—so many people who had been hippies and felt lost became Born Agains.” Before getting washed in the blood of the lamb, though, Billy progresses through an encyclopedic array of pop-cultural and art-historical references, from the obscure (Jess Collins’s “Tricky Cad” collages) to the iconic (Dr. Seuss,
Salvador Dalí
). 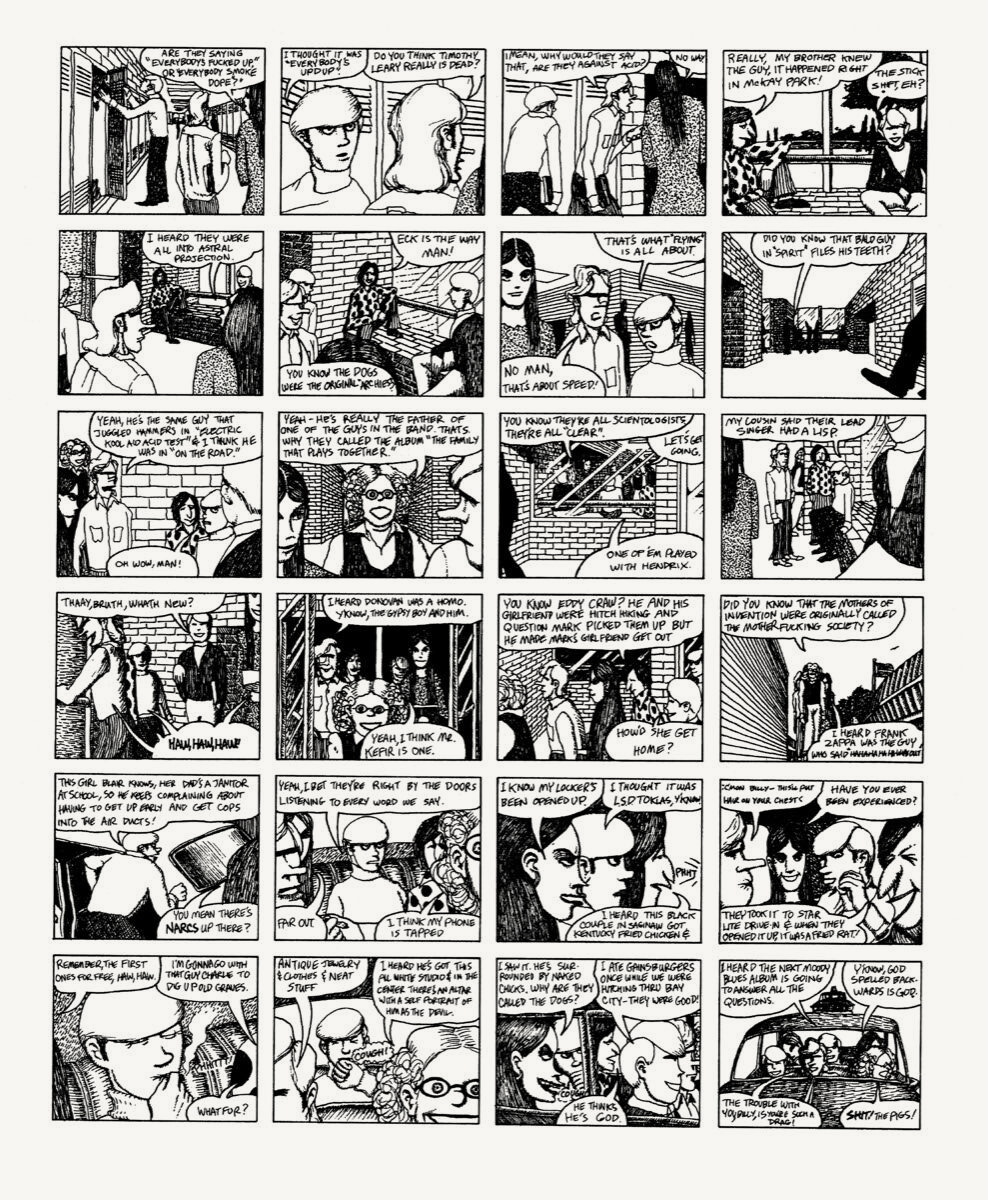 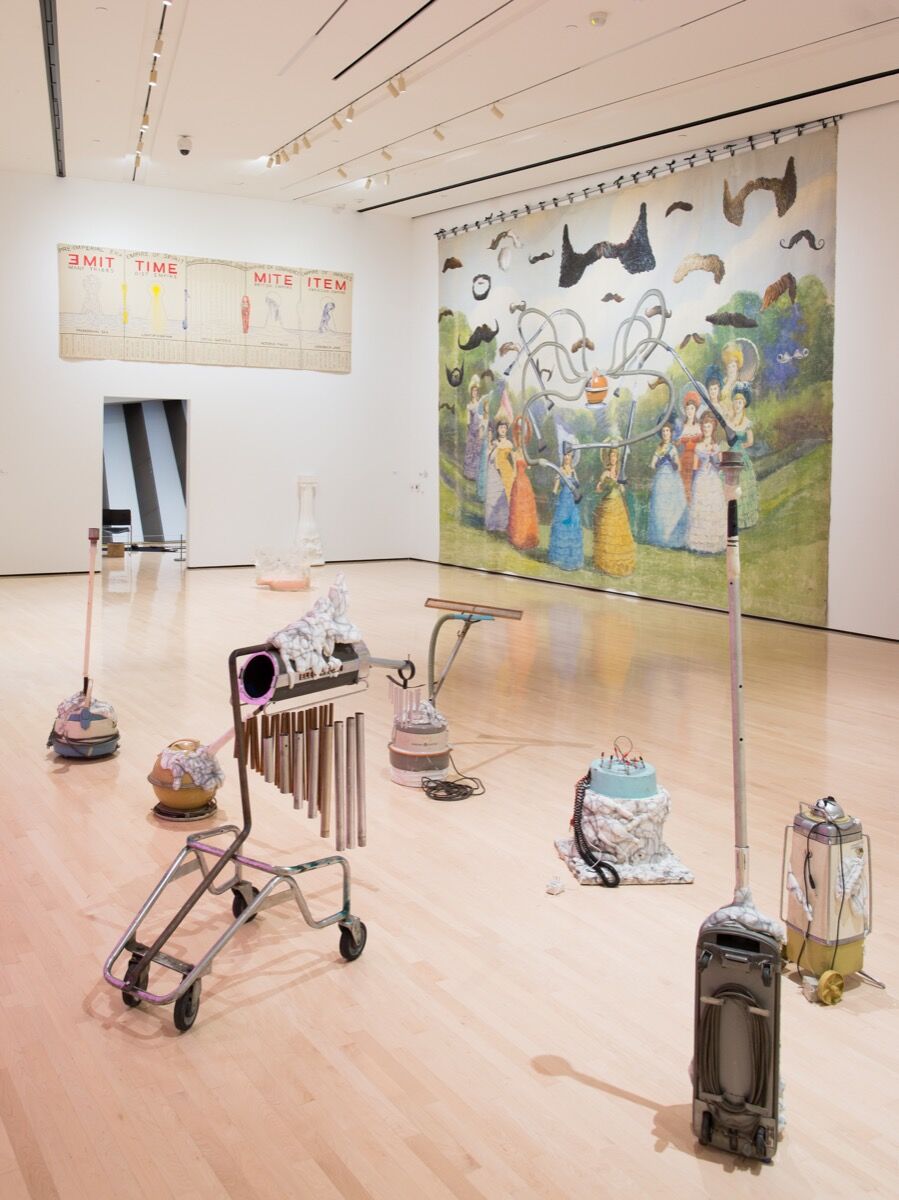 This magpie curatorial impulse is a major factor in both Shaw’s and Kelley’s aesthetics. Shaw’s phenomenal archive of unhinged religious posters, conspiracy theory newsletters, and UFO cult recruitment material was the basis for “The Hidden World”—restaged for “Michigan Stories” with expanded sections on legendary L.A. evangelist Miss Velma, the El Cajon-based Unarius Academy of Science (which channelled UFO testimonials from
Leonardo da Vinci
and other notables), schizophrenic/visionary alien abductee/archeologist Richard Shaver, and the work of Stanisław Szukalski—Polish-born modernist sculptor and inventor of the theory of Zermatism, which details mankind’s eternal struggle with the half-bred Yetis that secretly control the world. Kelley’s own pop-culture hoarding tendencies are represented by his rapid-fire, densely-packed Harem videos, which compile his personal collections of pin-ups, postcards, records, comic books, and more.
All of which points up a central paradox at the heart of “Michigan Stories”: Most of the cultural touchstones that inspired Kelley and Shaw weren’t specific to their geographical location; they were specific to the lower classes, mass media, and the counterculture.
What made Michigan different was that it was ahead of the curve in the slide from 1967’s flower power to 1977’s punk irony—not to mention post-apocalyptic decadence. This was the home of Iggy and the Stooges, after all. The same regional milieu that fostered the Stooges produced MC5 and John Sinclair’s White Panther Party, rock critic Lester Bangs, and some of the most interesting early punk bands, including Destroy All Monsters. This radical, music-centered subculture—rather than any incarnation of the art world—is what spurred Kelley’s and Shaw’s ambitions. 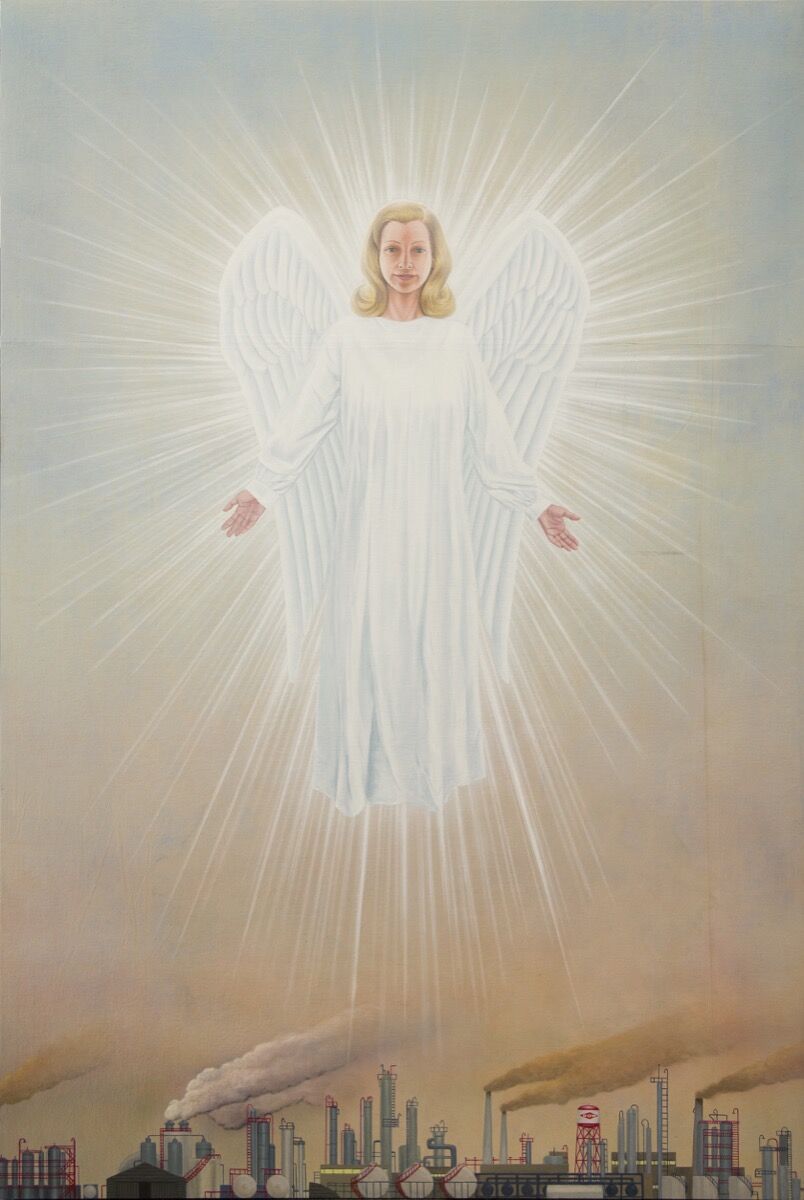 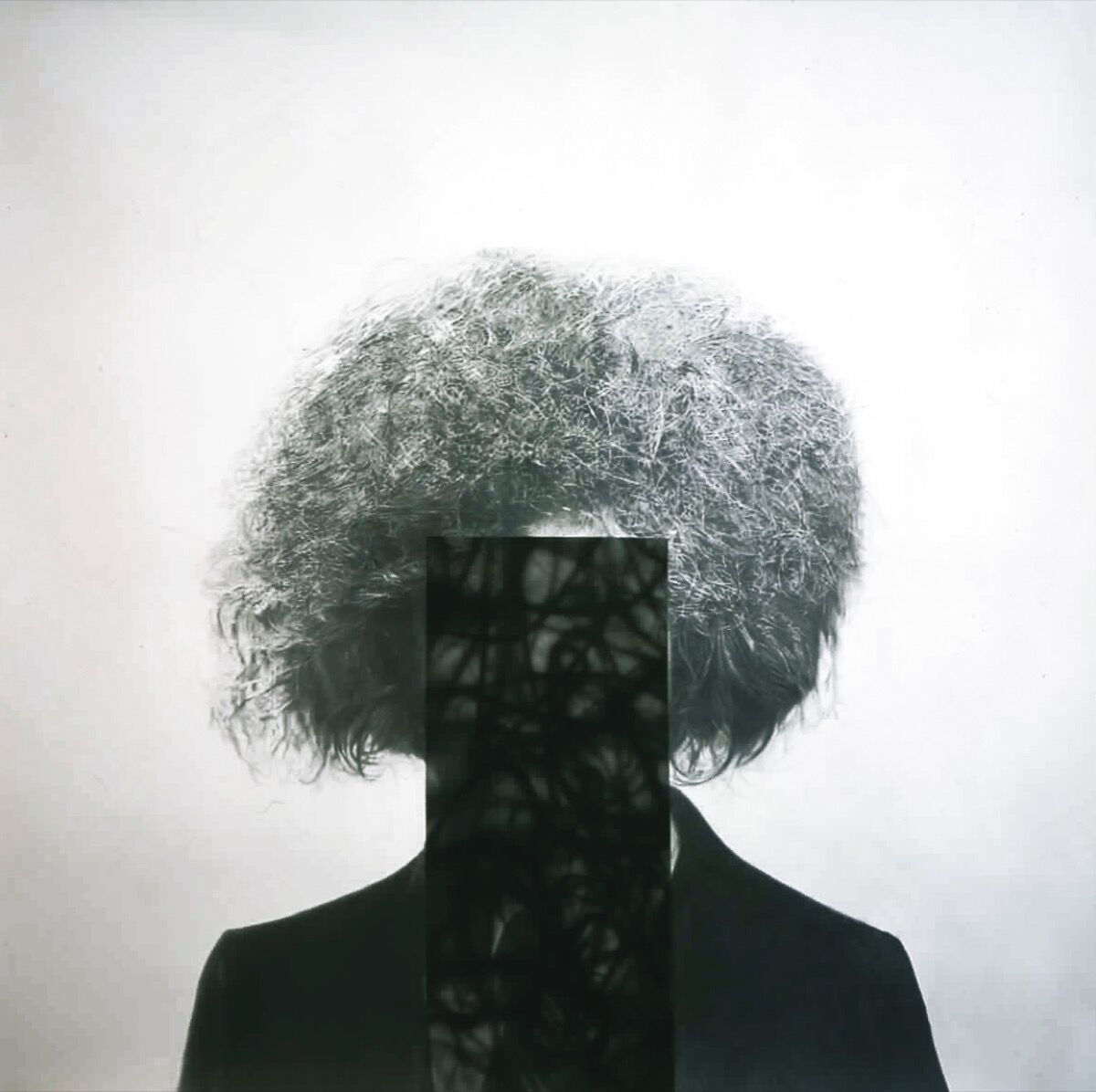 “Mike always had this urge to be a success,” Shaw tells me, “even when being a success wasn’t a cool thing to want. So it was sort of hidden, cloaked. But again, if you were in Ann Arbor there wasn’t a world to have a success in. Even in New York, the frickin’ art world was moribund in the ‘70s, just aging leftovers of the
AbEx
era—no wonder we didn’t see any place for ourselves in it. I didn’t care. I just thought ‘There’s gotta be something else to do—let’s start a band!’ ”
Glimmers of new possibilities lured Kelley and Shaw on the road west (in a Ford Pinto and an AMC Gremlin, respectively) in 1976. The rich potentials of their lack of good taste—coupled with the post-industrial ethos of their Midwestern homeland—came to be central to the reinvigoration of their own practices. In time, it would also help jumpstart a considerable chunk of the contemporary art world as well.
The complexity of this debt is probably best exemplified by a group of hagiographic “history painting” banners made by Destroy All Monsters circa 2000. These works half-ironically acknowledged the significance of local Detroit television personalities—Soupy Sales, Captain Jolly, Morgus the Magnificent, wrestler George “The Animal” Steele, and Milky the Clown— and working-class rockers like the Grand Funk Railroad, ? and the Mysterians, Mitch Ryder, and Ted Nugent, as well as bona fide freaks like Sun Ra, George Clinton, and Alice Cooper. All these notable creatives and more are clustered together across three enormous canvases like some MAD magazine parody of The School of Athens. But on the fourth and final canvas there’s only one group pictured—posed in front of Westland Shopping Center, outside Detroit—and of course it’s Destroy All Monsters. History is written by the winners. Or at least the ones that got away.
Doug Harvey
Related Stories