From His Studio in a Beirut Refugee Camp, Palestinian Artist Abdel Rahman Katanani Stands up for Displaced Peoples Worldwide 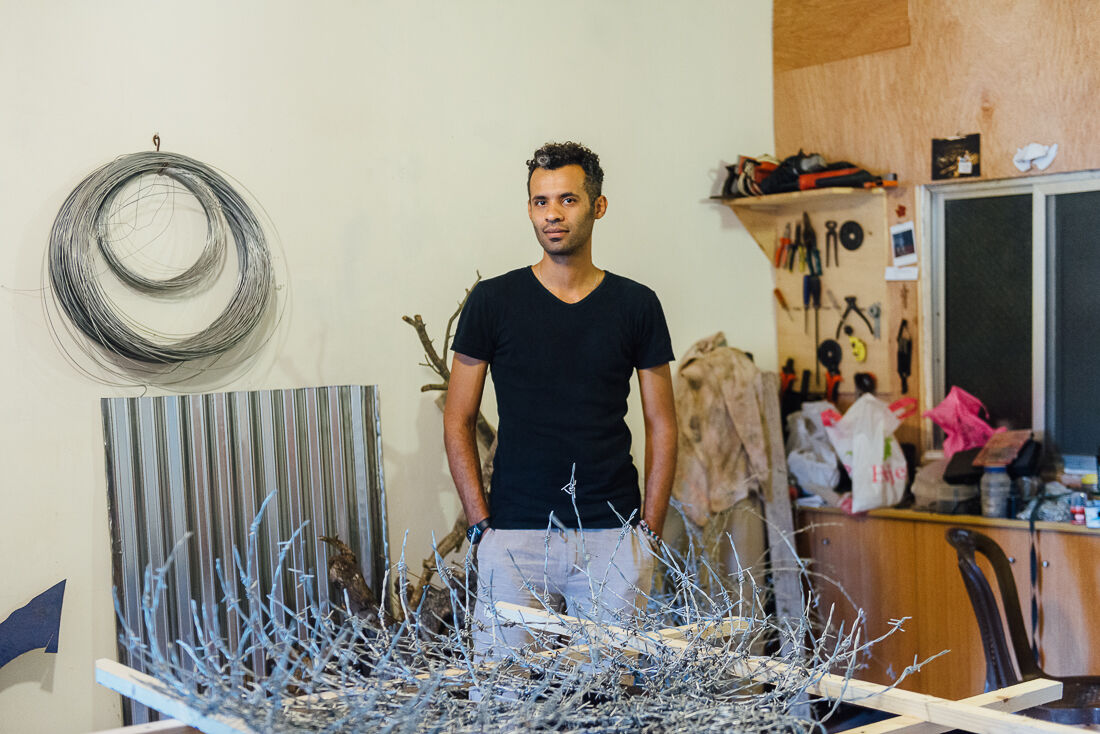 Portrait by Tanya Traboulsi for Artsy.

On the first of September in 1982, 15 days before the 48-hour massacre of Lebanon’s Sabra and Shatila refugee camps, artist Abdel Rahman Katanani’s parents escaped to Beirut’s Ain El-Mreisseh neighborhood. The Israelis had reached the Lebanese border, terrifying many in what culminated in an invasion. “There were rumours about something happening in the camps,” explains Katanani, whose maternal grandfather refused to flee. He had left his home in Haifa in 1948 and, according to the artist, wasn’t prepared to “regret the same mistake twice.” The Israeli Defence Forces surrounded the camps, while their allies, the Lebanese Christian right-wing Phalange party, carried out the slaughter, with intent to eradicate Palestinian Liberation Organization fighters. “We are still not sure what happened to two of my aunts’ husbands,” says Katanani. Four months later, the UN classified the Sabra and Shatila holocaust as an act of genocide. Nine months after that, Katanani was born in Sabra and has lived there since.
Amazingly, he is not a bitter or angry man. “Growing up, there was a sort of heroic notion that when you get older, holding a weapon and fighting for ‘the cause’ is one’s duty, but my parents wholly rejected this,” he explains. “It was a tempting notion to subscribe to as a child and I clashed many times with my father who insisted that this was all baseless. I realized that to get out of this sphere, creativity was the answer.” 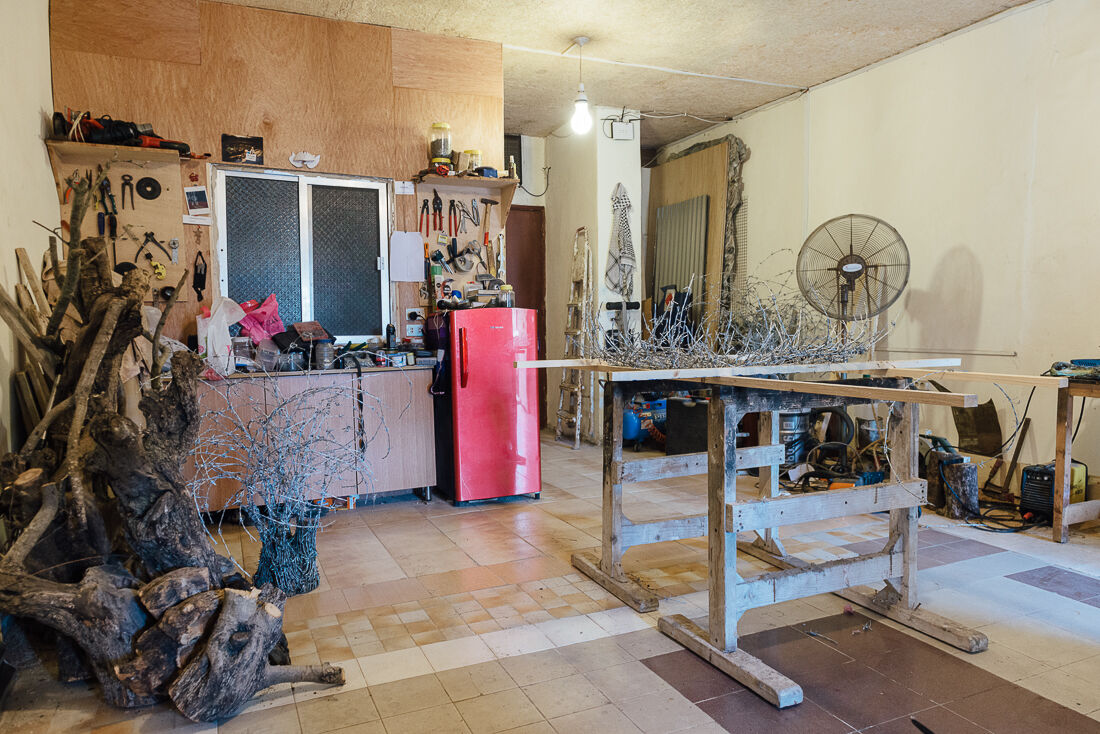 Katanani’s locale and nationality continue to have a profound impact on his psyche, identity, and practice. In 2007, when Beirut dealer Saleh Barakat of Agial Gallery signed him on, Katanani’s oeuvre derived its inspiration chiefly from Sabra and his Palestinian heritage. Palestine is ever-present in Katanani’s work, but has come to serve as a metaphor for the displaced the world over—the figures he renders in corrugated iron are not strictly Palestinian. At present, they might be portraits of Syrian migrants. One particularly poignant artwork is After Six Days And We Will Be Back Inshallah (God willing) (2011). Impacting title notwithstanding, the 2011 four-part piece features a fleeing family of six with children’s toys stitched in hessian cloth and bags over the adults’ heads containing kitchen utensils. Movingly, a set of keys hangs on the father’s waist. 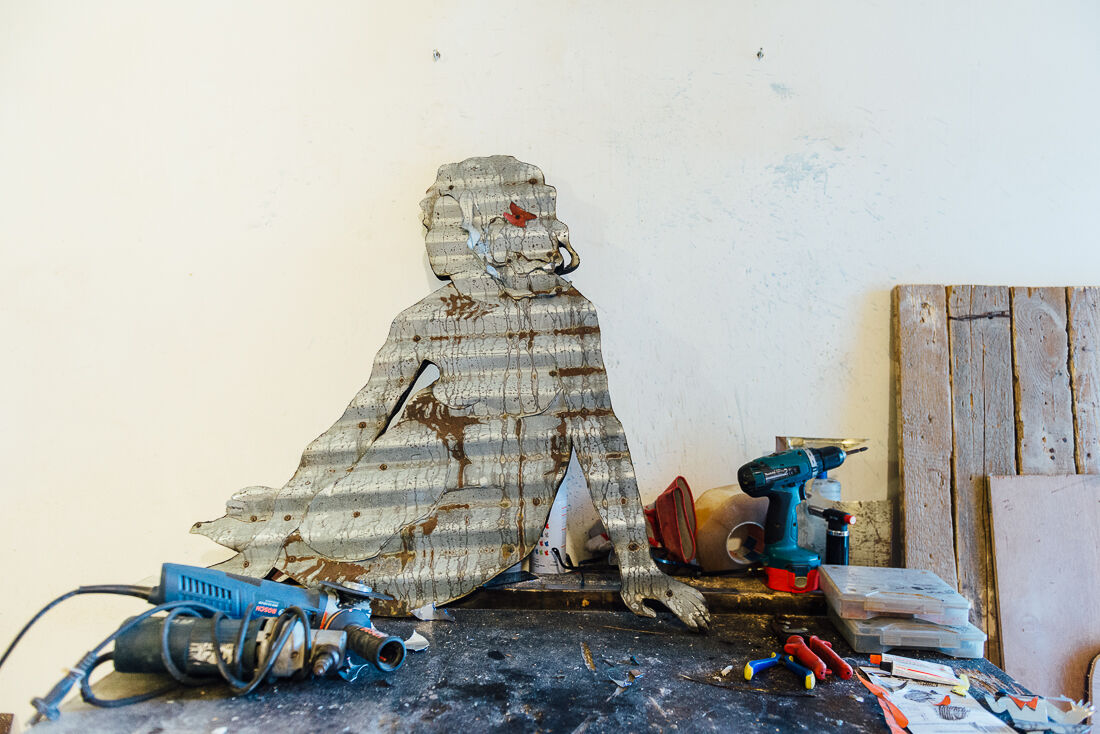 Photos by Tanya Traboulsi for Artsy.

Previously, Katanani often incorporated materials found in Sabra into his sculptures; these included bottle-caps, clothes, and laundry pegs, among others. The material inspired the work, however, today, as he says, the idea dictates and even precedes the work. This is perhaps largely due to Katanani mentally traveling outside the confines of a camp, which, he says, is “growing vertically, not horizontally, with floors added onto buildings and its inhabitants increasing in numbers and not progressing in any other respect.” 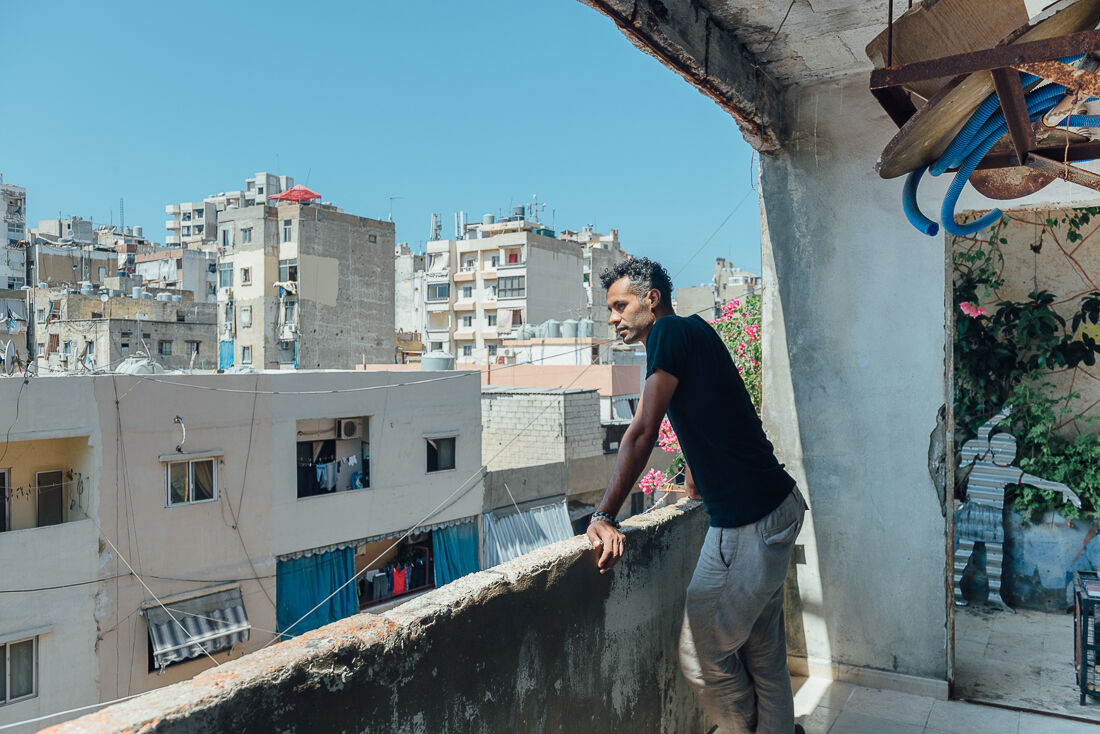 Portrait by Tanya Traboulsi for Artsy. “I’m among a few who can transport the refugee cause,” says Katanani, who has recently spent over a year in Paris, four months of which at an Al-Mansouria Foundation-sponsored residency at the Cité Internationale des Arts. The French capital allowed him a telescopic view of Sabra and the desire to render his work in three dimensions. It is no wonder: Katanani’s Sabra home-cum-studio began as a 15-square-meter area. With time and artwork sales, he bought the adjoining room, the combined space now standing at 35 square meters. “I started to appreciate how people would interact with and walk around the work,” he says. The French capital, however, did not afford him the luxury of accessibility when sourcing materials for his work. He drove to Lyon to buy barbed wire and bought corrugated iron from Parisian suburbs. “When I interact with metal, I feel like there is a relationship, a silent discussion,” says Katanani. 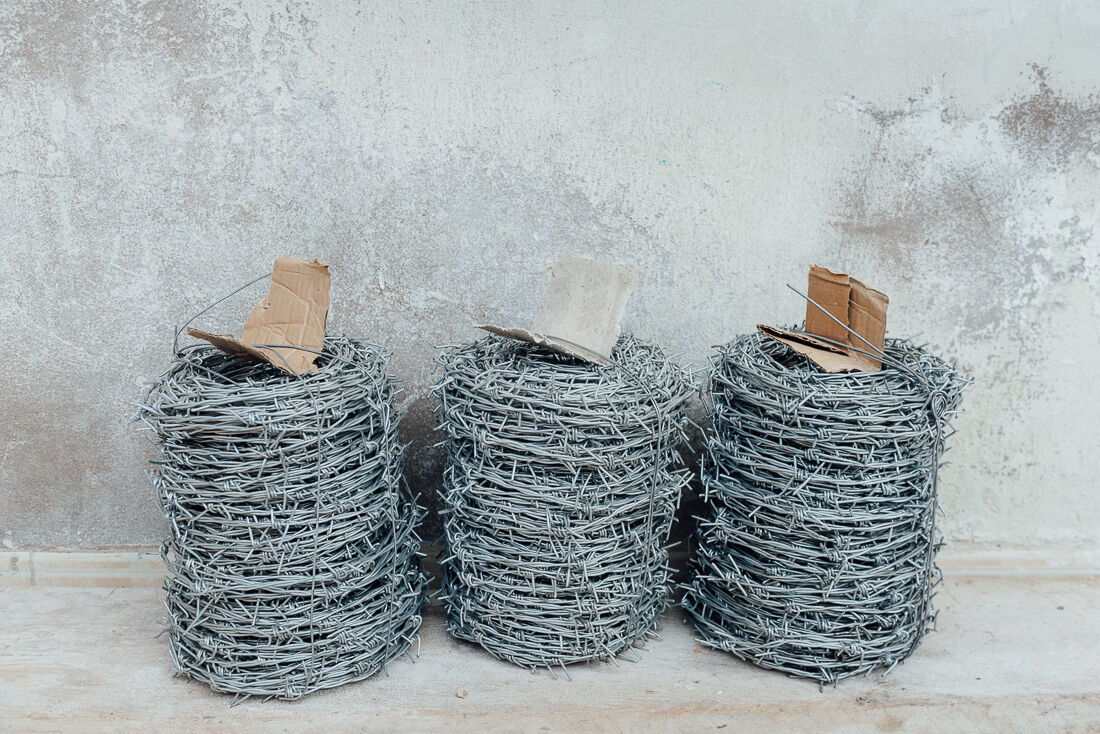 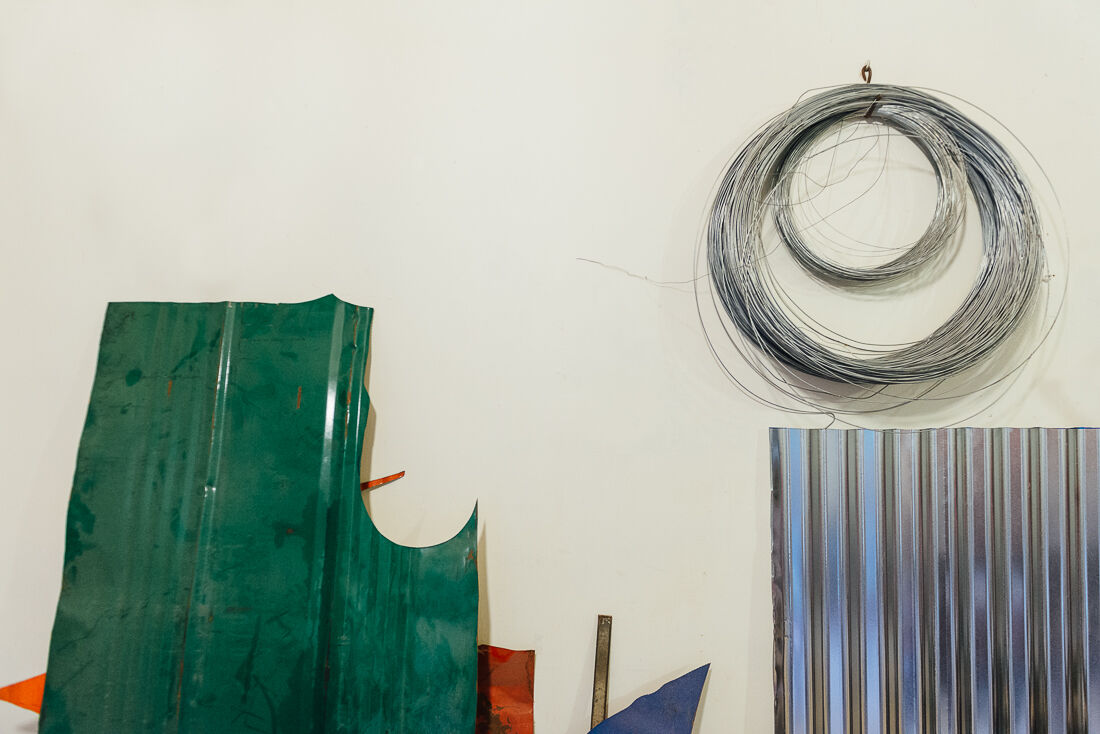 In November 2014, together with two fellow artists, he staged an exhibition focused on the theme of recycling. “My Beautiful Laundrette” took place at the Cité’s laundromat and though its name was solely a result of the show’s location, Katanani emphasises that “laundry is a form of recycling.” Katanani sought to tackle how both people—especially those confronted with seemingly inescapable circumstances, such as refugees—and the past continue to circle on themselves.

Photos by Tanya Traboulsi for Artsy.

He attempted to take the metaphor into 3D; “that’s when the tornado appeared,” he explains. That tornado, entirely handmade from 500 meters of barbed wire and standing at two meters high, mounted an allegory for refugees “stuck in a void without knowing what the future holds.” Katanani upgraded it to a monumental 300 x 200 x 200 cm for his second solo at Agial in May this year. All 200 kilograms of it stood five cm above the ground, levitating threateningly. Surrounding it were olive trees—indigenous to Palestine—made in barbed wire and rendered three dimensionally. The show sold out, with the tornado acquired by global shipping company CMA CGM. “The tornado is a feeling,” he says, referencing the rise of ISIS and sectarianism. “My understanding of religion is more of freedom than repression.” 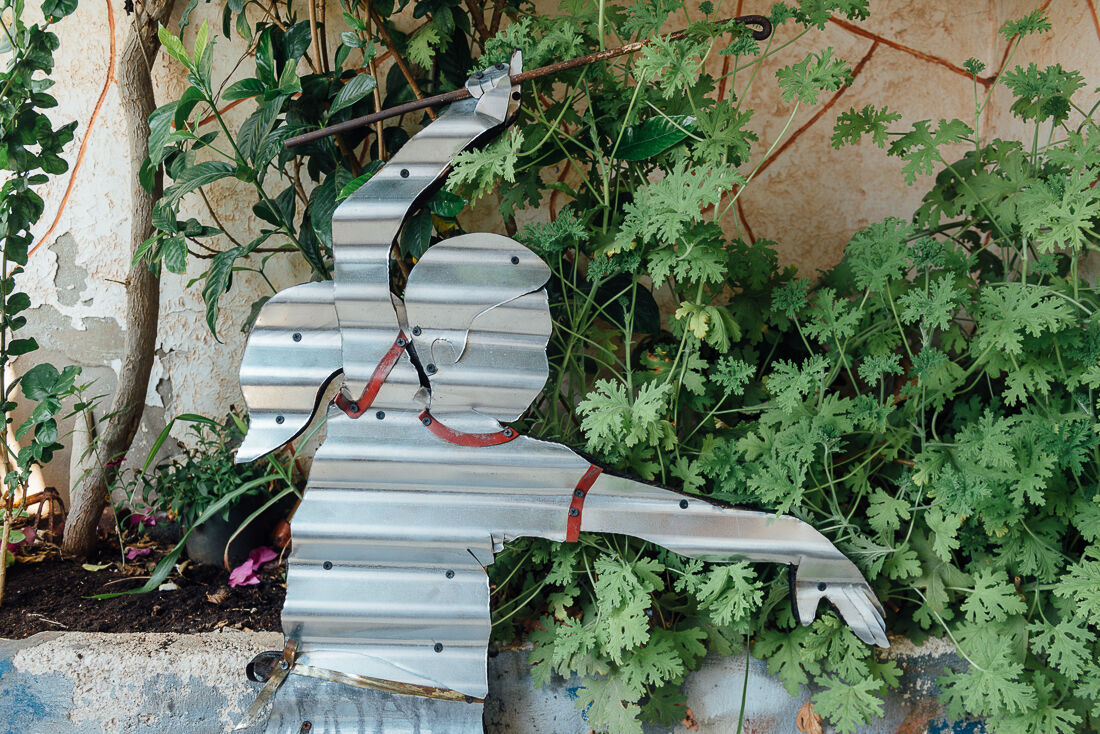 Katanani is preparing for shows in New York’s Castor Gallery and Doha’s Al-Markhiya Gallery in March where he will show olive trees and children. Earlier, his sculptures of children showed them floating, but now, he says, “I want them to stand within nature to reflect on our attachment to land.” Lebanon is currently reeling from an uncollected garbage crisis, which the camps seem immune to. “Sabra is a republic,” laughs Katanani. “It’s like we are uninvolved in the Arab world.” He maintains that he will continue to live between Beirut and Paris and has “made a dream come true” by buying a plot of land in Beirut where he intends to build a studio and a house for his parents and sisters. All the same, his Sabra studio will remain too.
—Myrna Ayad
Related Stories