How Millennia of Cleopatra Portrayals Reveal Evolving Perceptions of Sex, Women, and Race 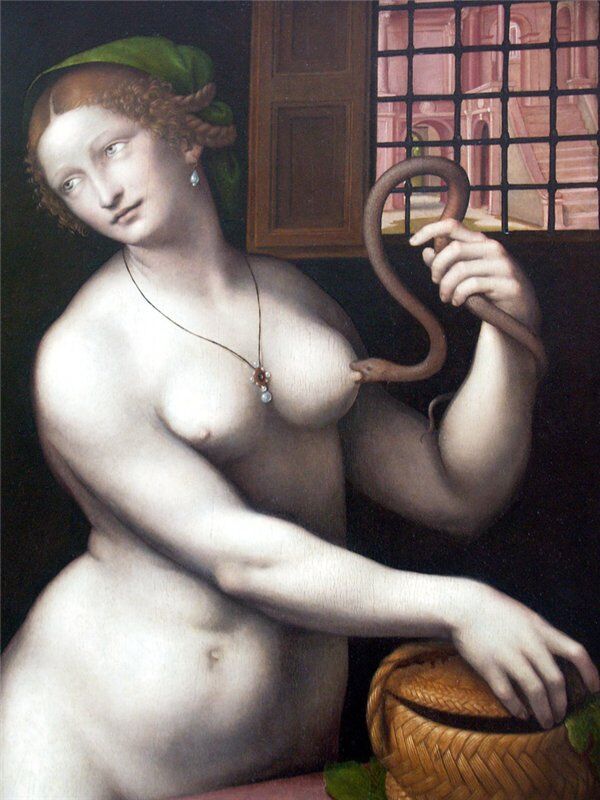 Giampietrino, Death of Cleopatra, c. 1530. Photo via The Athenaeum. Guido Cagnacci, The Death of Cleopatra, ca. 1645-1655. Courtesy of The Metropolitan Museum of Art.

Cleopatra’s death has captivated artists for reasons alternately sensual, solemn, and deeply suspect. For many painters and sculptors over the past few millennia, the subject matter has offered an opportunity to perpetuate myths about the dangers of powerful women and render the female nude in an anguished, dramatic state. In
Giampietrino
’s Death of Cleopatra (c. 1515), for example, a snake (a phallic figure if there ever was one) bites the naked woman’s nipple—the painter eroticizes female demise.
Yet many portrayals of the Egyptian queen offer more than mere images of morbid sexuality. Altogether, these depictions reveal more about the times in which they were made than about Cleopatra herself.
Cleopatra was born around 70 or 69 BC to King Ptolemy XII, who ruled over Egypt (the family was actually Macedonian Greek). Drama dominated her lineage—her brother, with whom she was supposed to co-rule after her father’s death, forced her out of the country. Cleopatra retaliated with military forces and lost. In 48 BC, Julius Caesar defeated Pompey the Great in Alexandria and Pharsalus, coups that made him dictator of the Roman Empire. He stayed in the Ptolemy palace. Shortly after, Cleopatra joined him, secretly returning to the palace from exile. The pair quickly united in love and politics, together regaining the Egyptian throne.
Cleopatra governed Egypt for 22 years, long past Caesar’s assassination in 44 BC. Her subsequent union with Mark Antony, a potential successor to Caesar’s throne, ended in mutual suicide when their contender, Octavian, defeated the pair. Cleopatra probably didn’t use a poisonous asp to incite her death, but 15th-century artists began perpetuating that myth; Shakespeare’s early 17th-century play Antony and Cleopatra further promoted it. 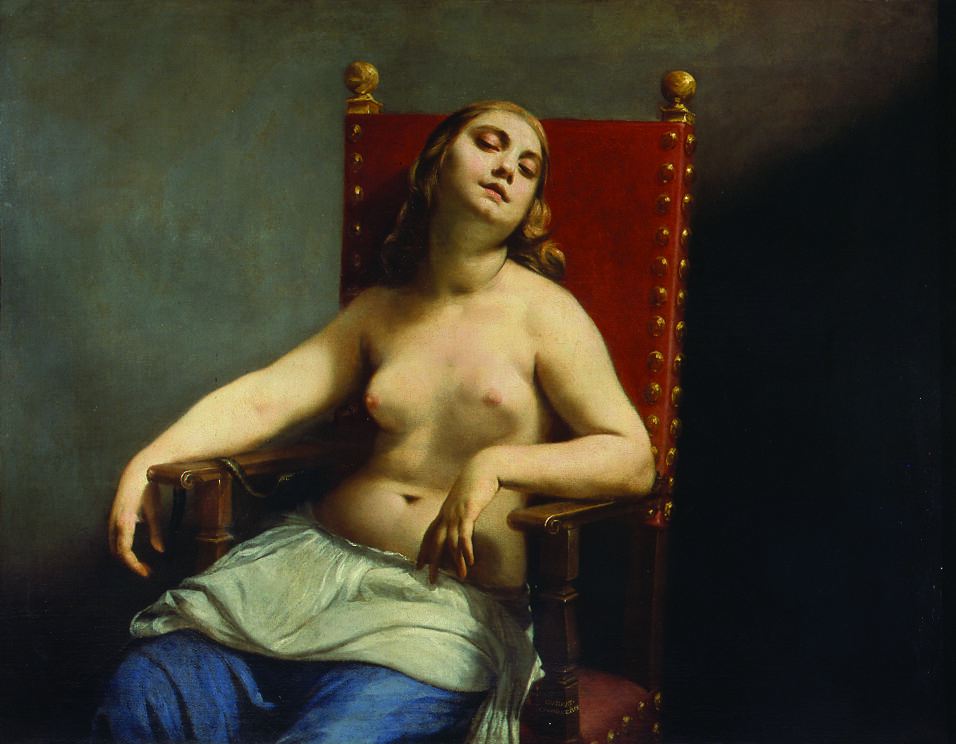 Guido Cagnacci, The Death of Cleopatra, circa 1660–62. Courtesy of Pinacoteca di Brera.

While Caesar and Antony are remembered for their military prowess, Cleopatra never got her due for her own accomplishments. “Not only did she command an army and navy, negotiate with foreign powers and preside over temples, she also dispensed justice and regulated an economy,” writes her biographer Stacy Schiff. Cleopatra also suffered from bad publicity: Octavian began a centuries-long promotion of the defeated queen as a “wanton temptress.” From
Michelangelo
to Bertolt Brecht to Hollywood directors, artists disregarded her political acumen and brilliance (she was fluent in nine languages). As Schiff explains, “It is less threatening to believe her fatally attractive than fatally intelligent.”
Some of the earliest depictions of Cleopatra, in fact, did not present her as such a head-turner. Coins dating back to the 30s BC portray the ruler as a very ordinary-looking woman. The famed 1st century biographer Plutarch offered one of the earliest written accounts of the queen. He highlighted her charisma more than her beauty, though he blamed Mark Antony’s fall on her seductions. In other words, he continued Plutarch’s myth of Cleopatra as the ultimate femme fatale.
At the beginning of the Renaissance, writer Giovanni Boccaccio featured Cleopatra’s story in his collection of biographies, On Famous Women (1361–62). Around the same time, poet Geoffrey Chaucer composed a poem about her. “From the Middle Ages on, portrayals of Cleopatra take her character to even greater extremes than the ancient sources do,” writes Prudence J. Jones. “For Boccaccio she is the epitome of vice, but for Chaucer she becomes a martyr of love.”
She was of special importance to Renaissance artists, who were interested in depicting “Uomini famosi,” what Cincinnati Art Museum (CAM) curator Peter Jonathan Bell describes to Artsy as “exemplary heroes or anti-heroes of antiquity or mythology.” Under these parameters, Cleopatra became an acceptable subject for representation. In the 17th century, Bell says, patrons had the flexibility to ask for representations that pushed toward their “other desires, whether they’re erotic or what have you.” If you wanted to commission something sexy, in other words, it was just fine to ask for a picture or sculpture of Cleopatra. Reginald Arthur, The Death of Cleopatra, ‘The stroke of death,’ etc., 1892. Photo via Wikimedia Commons.

Advertisement
CAM is now exhibiting two paintings entitled The Death of Cleopatra by
Guido Cagnacci
. One, circa 1645–55, hails from the Metropolitan Museum of Art; the other, dating to 1660–62, is from Milan’s Pinacoteca di Brera. The earlier version is more dramatic, depicting the subject looking heavenward and pulling at her red dress to expose her breast to the murderous snake. The artist used
Guido Reni
’s equally dramatic iteration from around 1640 as inspiration. But Cagnacci’s earlier version depicts a very different scene: a woman, sitting unclothed from the waist up. A small snake is curled around the arm of chair, easy to miss at first glance.
“There’s a real sense of interiority,” Bell says about this later version. Only sovereigns and rulers had armchairs in Cagnacci’s day, and his inclusion of the furniture conveys a respect for Cleopatra’s position. In the painting, it’s unclear whether her eyes are open or closed, and whether she’s alive or dead. According to Bell, the portrait’s psychological complexity derives from these ambiguities. Encountering the life-sized figure of the painting is a surreal experience that, he says, “starts to blur the lines between fiction and reality and representation and instantiation.”
As a contrast to the two paintings, the CAM exhibition includes a 16th-century print from the Fontainebleau school. During this era, French artists created full dramatic scenes that evoked more narrative context for Cleopatra and her death; she’s seen reclining outdoors or accompanied by her maids. When
Romanticism
swept Europe throughout the late 1700s, this preference for sensational depictions reigned.
Geopolitical conflicts also shaped the way that artists rendered Cleopatra. Napoleon invaded Egypt in 1798, looting the country and bringing spoils back to Paris. Excitement about the region spiked, says Smithsonian curator Karen Lemmey. Britain annexed the country in 1882 as it expanded its overseas empire. It’s no surprise, then, that Reginald Arthur’s The Death of Cleopatra ‘The Stroke of Death etc’ (1892) exoticizes the queen’s death by including animal prints and a blur of incense.
American sculptors of the time took a different approach. “Egypt was a topic of great fascination, especially for Americans,” Lemmey says. She mentions four artists who rendered Cleopatra in the 1860s and ’70s:
William Wetmore Storey
, Thomas Ridgeway Gould, Margaret Foley, and
Edmonia Lewis
. Storey depicted Cleopatra considering suicide, while Gould showed an idealized queen. Foley offered just a bust that highlighted her subject’s power: In her carved-marble iteration, the queen is alive and well—snakes are a part of her crown, not a party to her death. 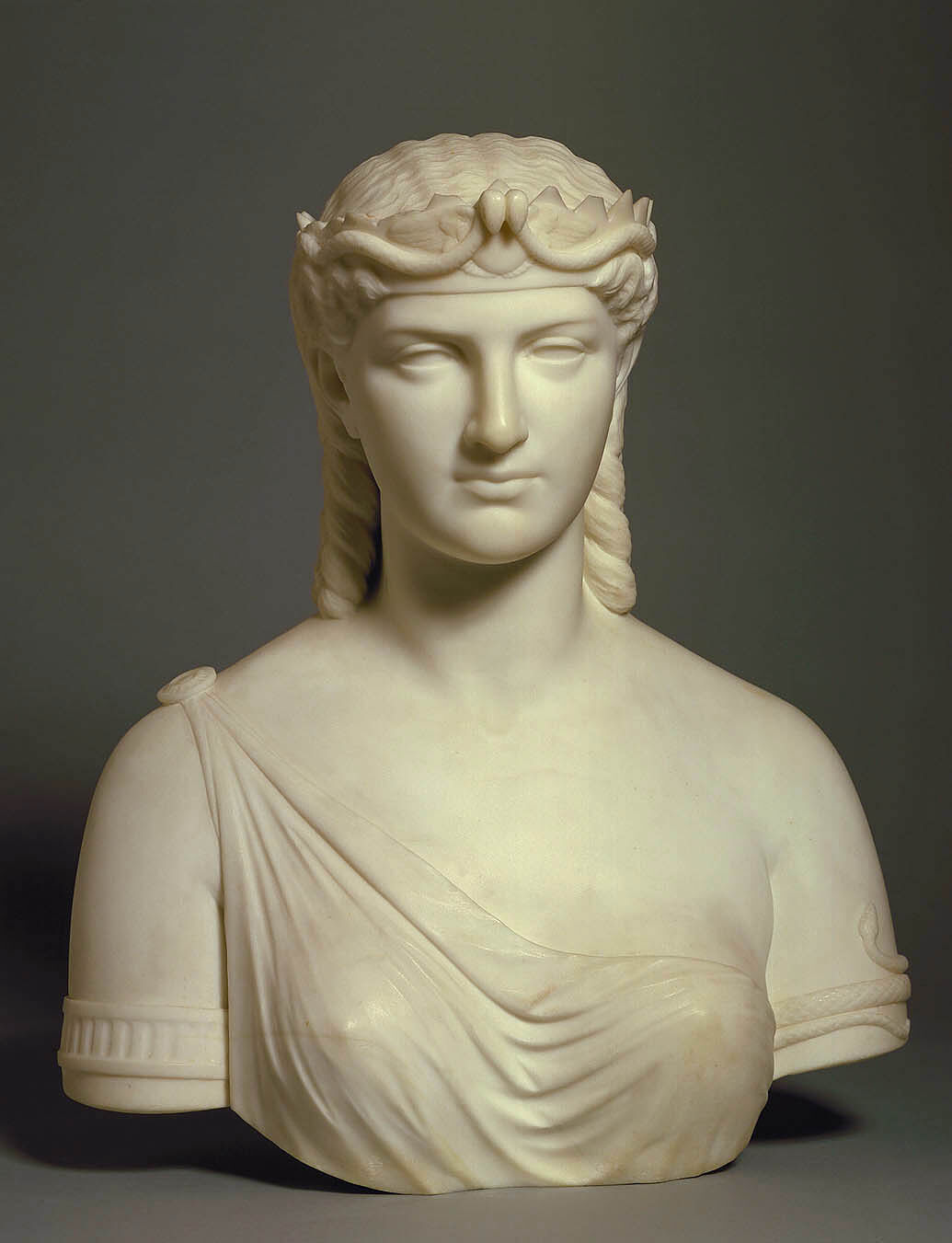 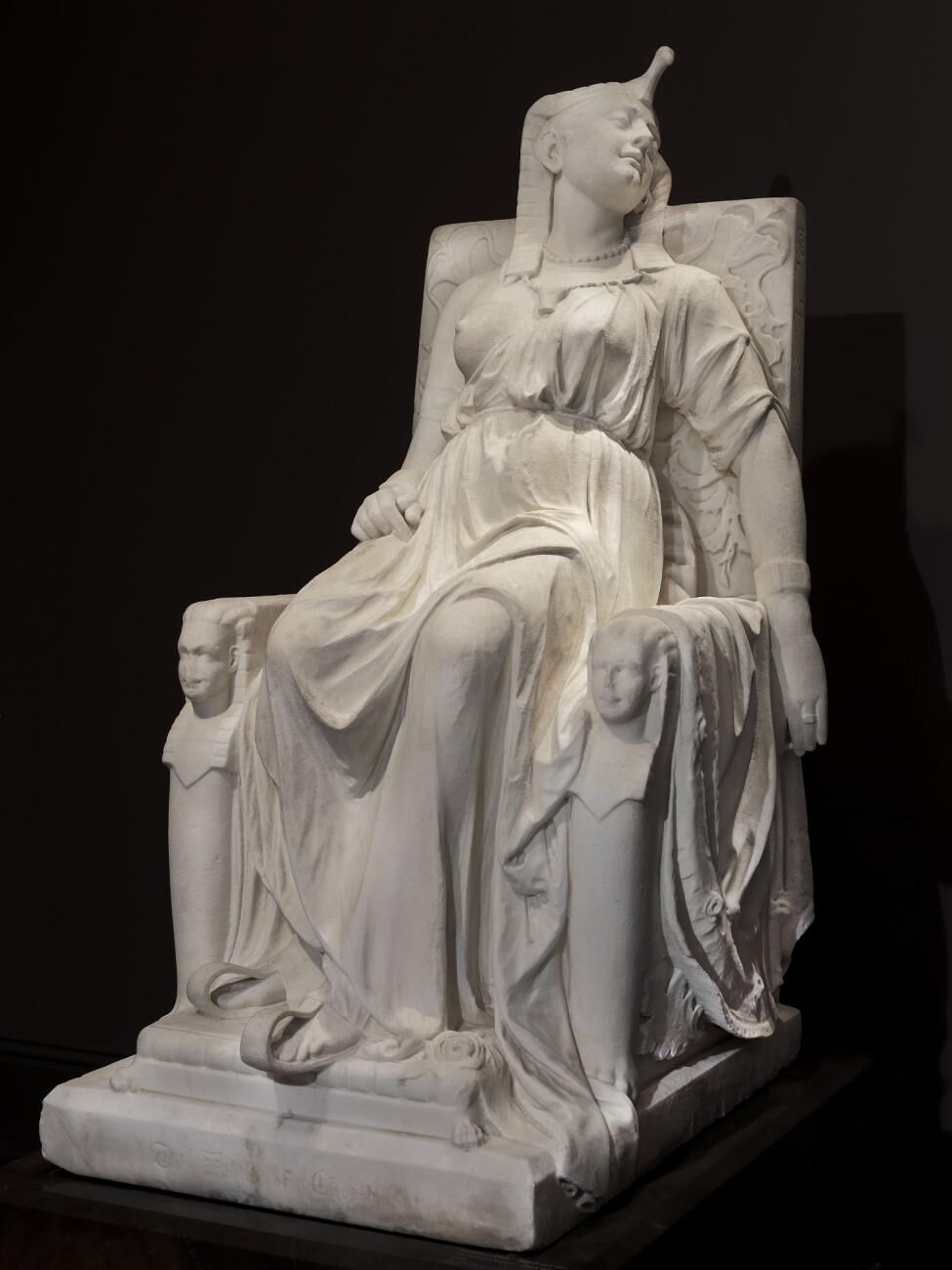 Edmonia Lewis, The Death of Cleopatra, 1876. Courtesy of the Smithsonian American Art Museum.

Lewis pursued an alternate angle. During the late 19th century, debates about the queen’s ethnicity circulated. Some believed her mother was Nubian, and that Cleopatra was in fact black. Others posited that she was simply Greek. Lemmey suggests that Lewis, who herself was African-American, looked at ancient coinage to help her figure out how to represent Cleopatra. “She’s really rooting into history, which is something that is often regarded very respectfully in the 19th century,” says Lemmey. Lewis promoted her work as truthful rather than imaginative. She exhibited her sculpture at the Centennial Exhibition in Philadelphia in 1876, a venue for celebrating cultural achievements. The sculpture disappeared from public view for years. It went on to have an odd and dramatic life: A saloon owner acquired it, then a racetrack owner used as it a gravestone for a horse. It was eventually discovered in a salvage yard in the 1980s.
Lewis’s version also emphasizes her subject’s self-determination. “We’re looking at a deceased leader,” says Lemmey. “It underscores the empowerment of Cleopatra because her alternative was to have been marched in chains as a trophy of the Roman army. She has had the last word.”
Yet artists—and Hollywood—weren’t done with her yet. As Elizabeth Taylor portrayed the title character in the big-budget 1963 film Cleopatra, and subsequently launched into a romance with her co-star Richard Burton, the queen’s name adopted entirely new connotations: money, glamour, and tabloid stories. In other words, “Cleopatra” had finally become distinctly American.
Alina Cohen
A previous version of this article contained an error, incorrectly identifying "Uomini famosi" as "Romani famosi."
Related Stories