The Haunting Photos That a Holocaust Victim Buried as Evidence 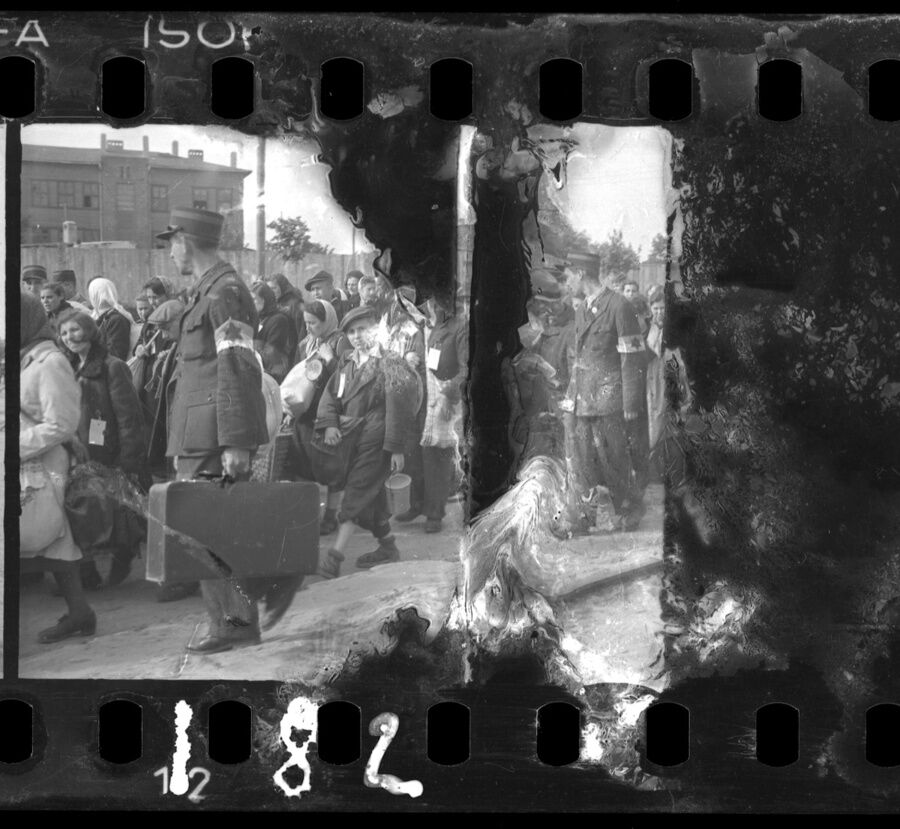 Henryk Ross was one of only 877 recorded survivors of the Lodz ghetto in Poland, where more than 200,000 people were confined by the Nazis between 1940 and 1945.
A photojournalist by training, Ross was put to work as the official photographer of the ghetto, which was run by the Nazi-appointed Jewish Council. He was tasked with taking ID pictures and propaganda images that celebrated the productivity of the ghetto’s labor force. What the council didn’t know, however, was that Ross was covertly documenting the degradation and tragedy of daily life in the ghetto.
In 1944, “anticipating the total destruction of Polish Jewry,” as he later recalled, Ross buried in the ground more than 6,000 negatives and prints packed in canisters inside a wooden box. “I wanted to leave a historical record of our martyrdom,” said Ross, who excavated his cache in 1945 after the liberation of the ghetto by the Red Army, and found more than half the images had withstood the ravages of ground moisture.
“The fact that these photographs survive is somewhat miraculous,” says Kristen Gresh, curator of photographs at the Museum of Fine Arts, Boston, which will open the first exhibition of the works in the U.S., “Memory Unearthed: The Lodz Ghetto Photographs of Henryk Ross,” on March 25th. The exhibition premiered in 2015 at the Art Gallery of Ontario, which was given Ross’s archive in 2007.
Included among some 300 objects in the show are Ross’s authorized photos alongside his surreptitious shots; examples of Nazi decrees posted in the ghetto; footage from the 1961 trial of key Holocaust organizer Adolf Eichmann, where Ross testified and submitted photos as evidence; and a 17-page folio of his contact sheets cut up and rearranged out of chronological order, which Ross worked on in the last years before his death in 1991. 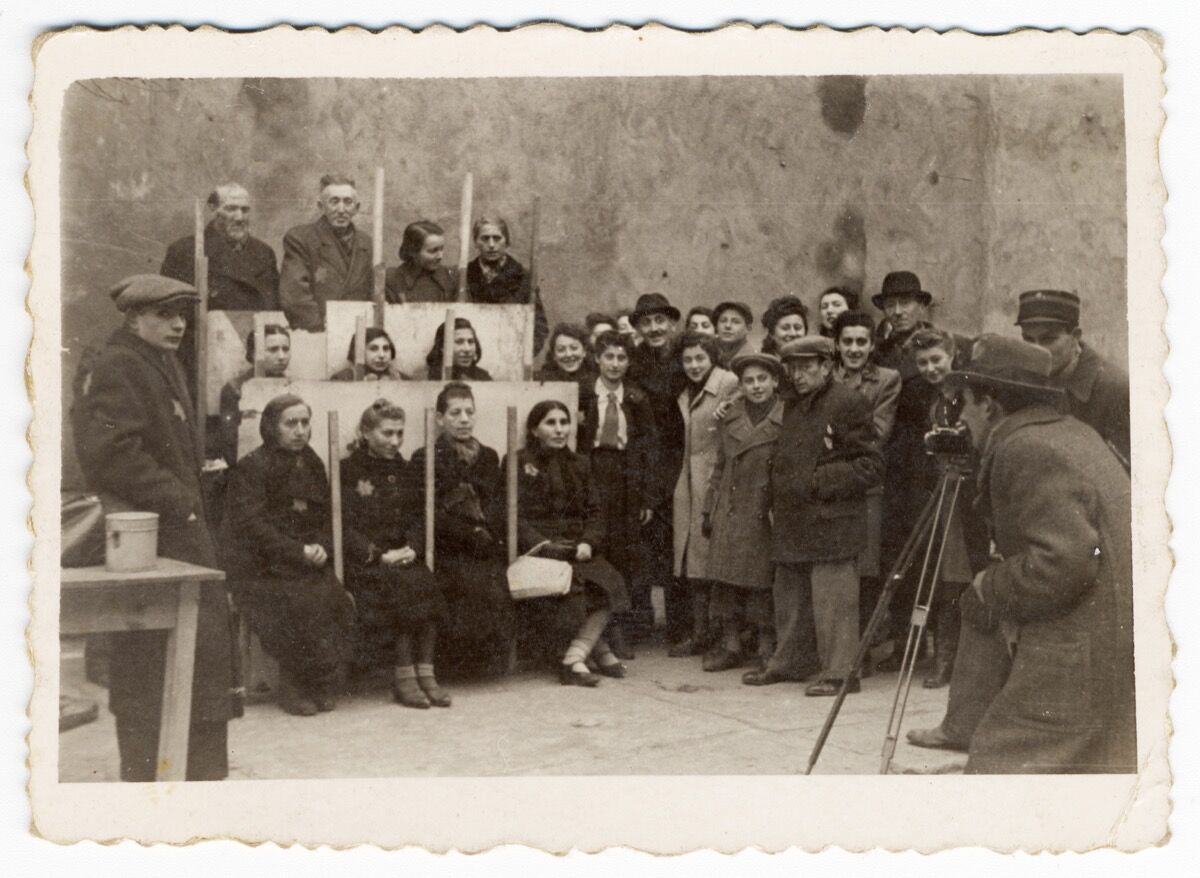 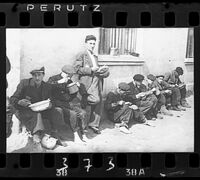 8 Images
View Slideshow
From early on in his internment in 1940, Ross figured out a way to stretch the photographic supplies he was allotted so that he could use them for his own means. “He devised this clever technique of photographing multiple people at the same time for their ID photographs, which would save film,” says Gresh. An image in the exhibition shows him photographing 12 people, organized into three tiers of four, at once. He would later crop the picture around each face.
In his first two years at the Lodz ghetto, Ross was able to move freely with his camera. He took sanctioned photographs of Jews working in the 100-plus factories and churning out everything from apparel to military supplies, which the Jewish Council believed would make the ghetto valuable to its German overseers. He also took shots of the Jewish police, who enjoyed better living conditions than other workers, as well as family celebrations like weddings and children’s parties. And he captured views of streets lined with barbed wire and of the secured bridge that kept people imprisoned.
After 1941, the images were often taken at oblique angles—through cracks in doors or his overcoat—without the use of his viewfinder. “They really cut down on what he could photograph and it became much more difficult to capture those covert images,” says Gresh. Ross photographed huge crowds amassed outside the soup kitchen and children digging through the dirt in search of “waste food, coal, wood,” according to a caption Ross later wrote. 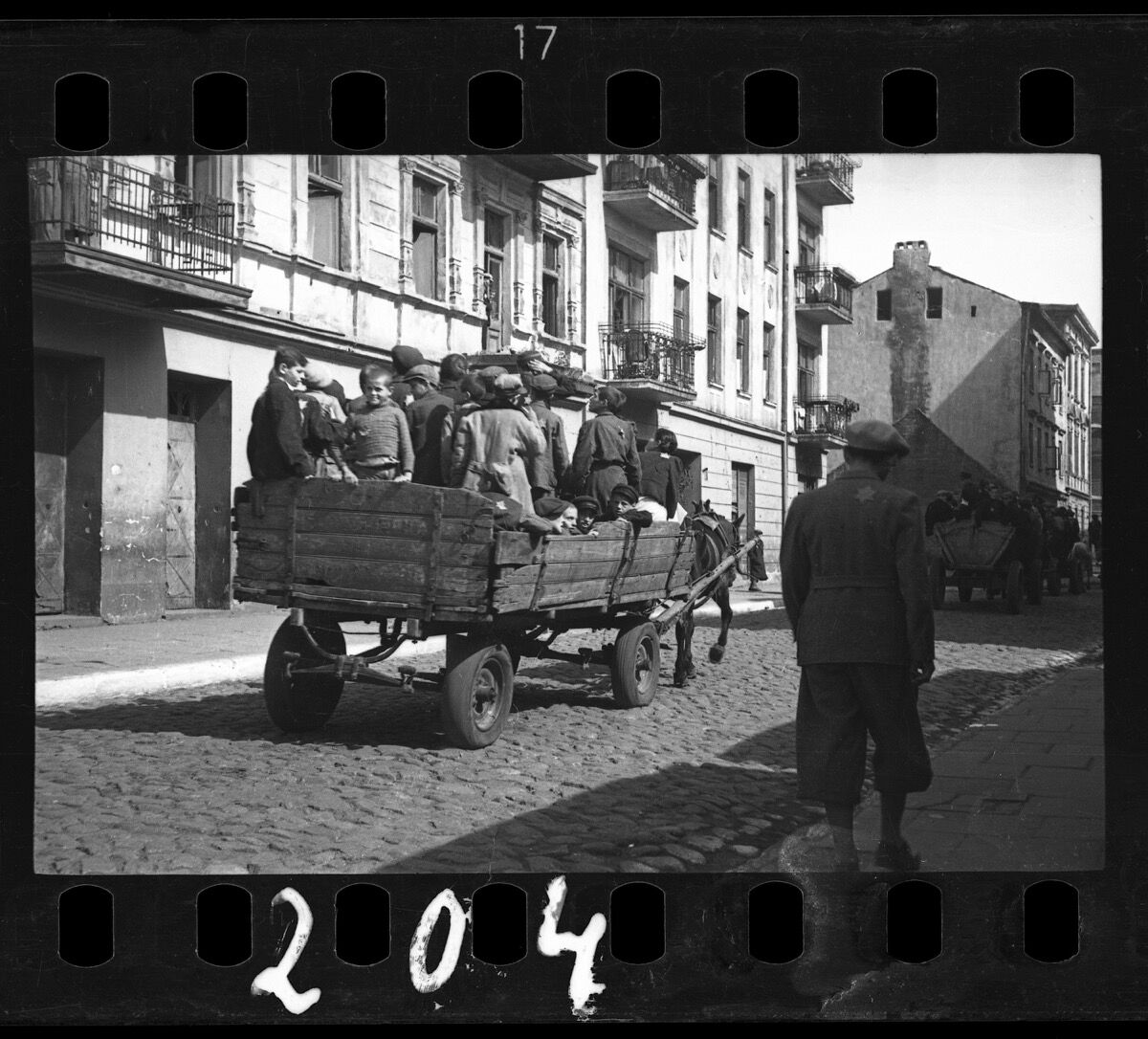 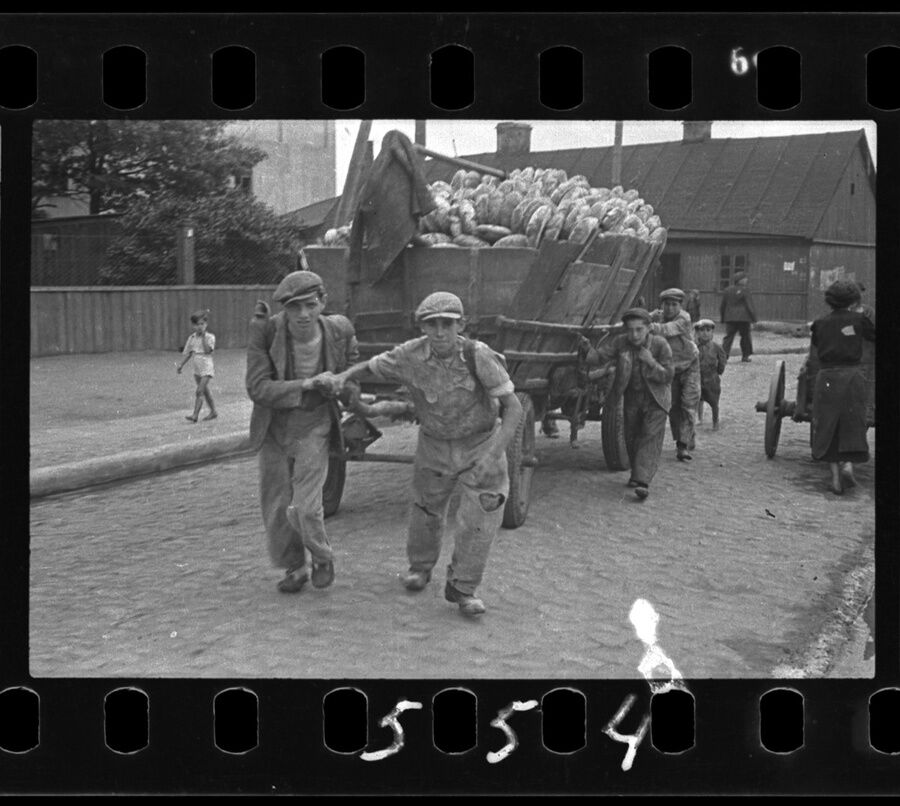 Advertisement
In 1942, the Jewish Council of Elders, under Nazi orders, decreed that parents had to give up their children under 10 for “resettlement.” Ross photographed carts filled with children and the sick and elderly being deported to Chelmno, a death camp 30 miles away. By this point, up to 100 people a day were dying from disease and starvation, and Ross documented how enslaved residents hauled bodies to the morgue.
In August 1944, when the liquidation of the ghetto was announced and mass deportations to Auschwitz commenced, Ross was one of some 900 residents held back as a clean-up crew to make the ghetto habitable for German refugees. Not expecting to survive, Ross buried the images he had risked his and his family’s lives to capture.
Some of the more harrowing images in the exhibition are accentuated by the chance effects of their brief entombment. Water damage destroyed half the negatives and created haunting abstracted passages in others. In a blurry image shot hastily from a distance and captioned by Ross “the gallows in operation,” a dark silhouette dangles off the ground from a rope with a trail of shadowy figures moving in the background. The degraded emulsion along its edges makes the corrosive horror of the image all the more palpable.
After liberation in 1945, Ross lived in Poland for another decade before emigrating to Israel. He would never take photographs again, but he printed some of his negatives in preparation for the Eichmann trial, and published a book, The Last Journey of the Jews of Lodz, in 1962. In 1987, he began cutting and pasting all his contact sheets into a storyboard-like album with unsettling juxtapositions—scenes of happy family life, say, followed by deportations.
“He created this album that’s not in any way a linear narrative, but there are lots of stories within it,” says Gresh. “It’s really the moment we can see Ross’s vision—or the experience of what he went through.” Clearly, he was still trying to process the trauma several decades later. 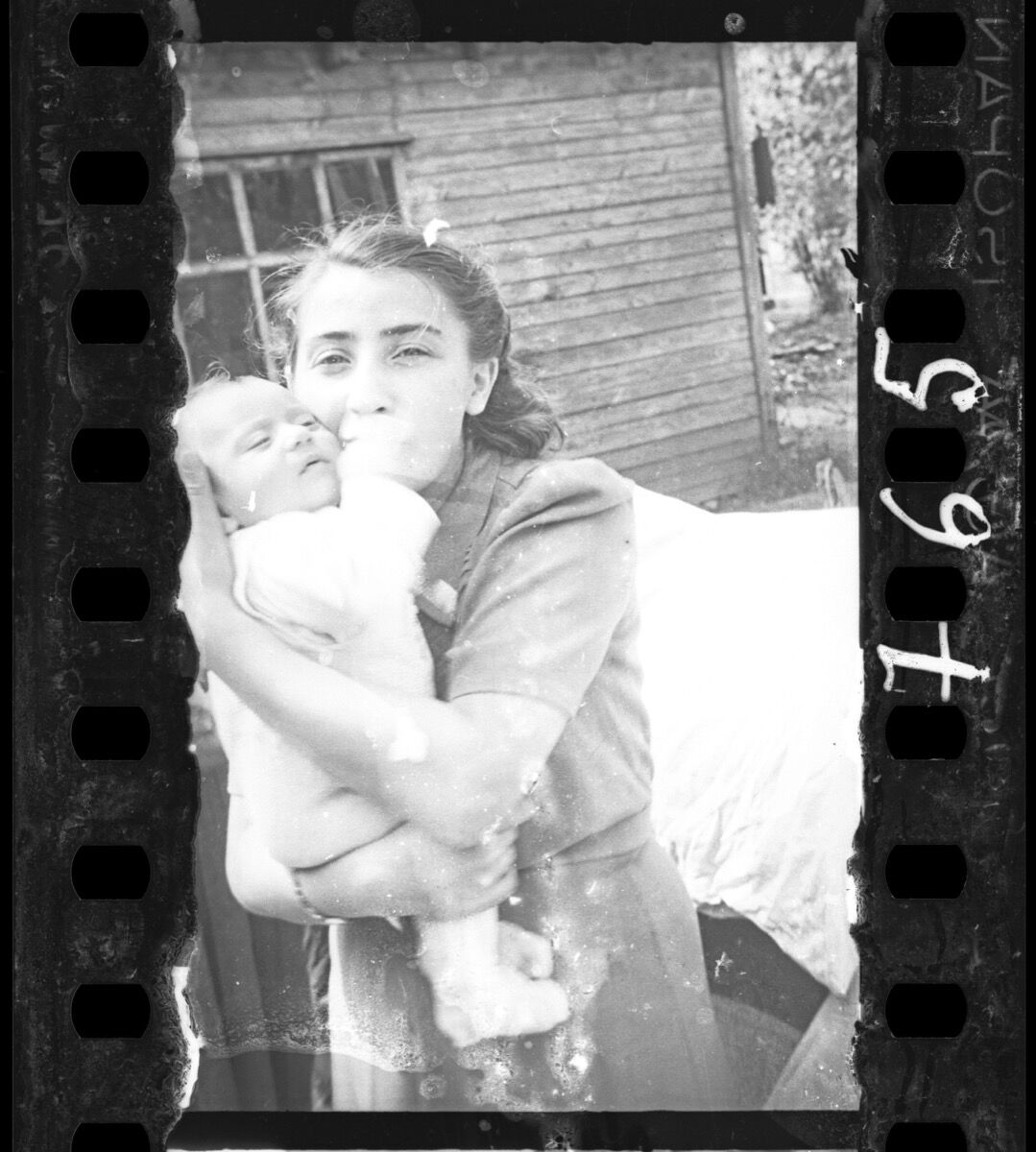 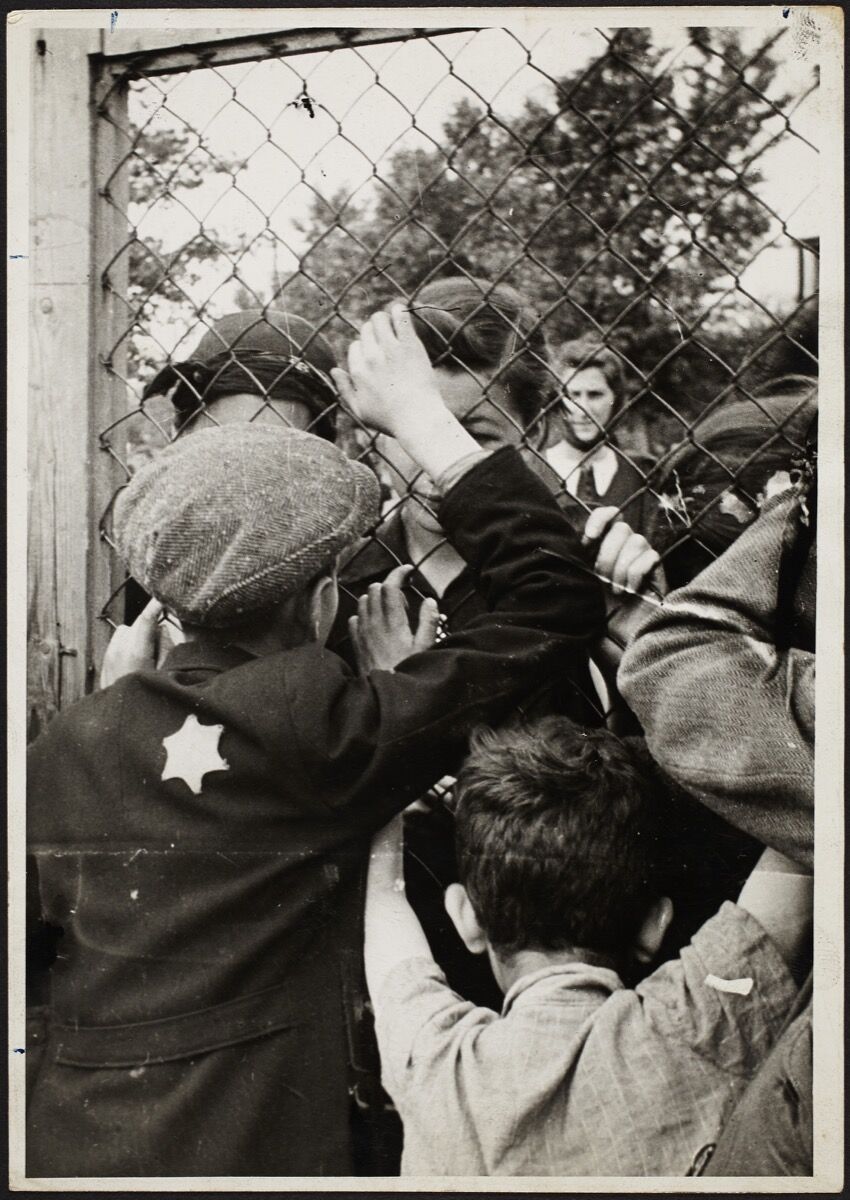 Henryk Ross, Children talking through fence of central prison on Czarnecki Street prior to deporation, 1940-42. © Art Gallery of Ontario. Courtesy of Museum of Fine Arts, Boston.

Taken as a whole, these images are more complex than the well-known photographs of atrocities at concentration camps taken by photographers like
Lee Miller
and
Margaret Bourke-White
. Take, for instance, a sequence of four shots by Ross showing a ghetto policeman and his wife admiring and kissing their infant, as any normal parents would.
Was this a scene of privilege enjoyed while so many other Jews in the ghetto suffered? Or did the tightness of the mother’s embrace of her baby expose her anxiety that her child, too, might be ripped away from them? Such unsettling ambiguities ripple through this one man’s perspective of the ghetto.
—Hilarie Sheets
Related Stories