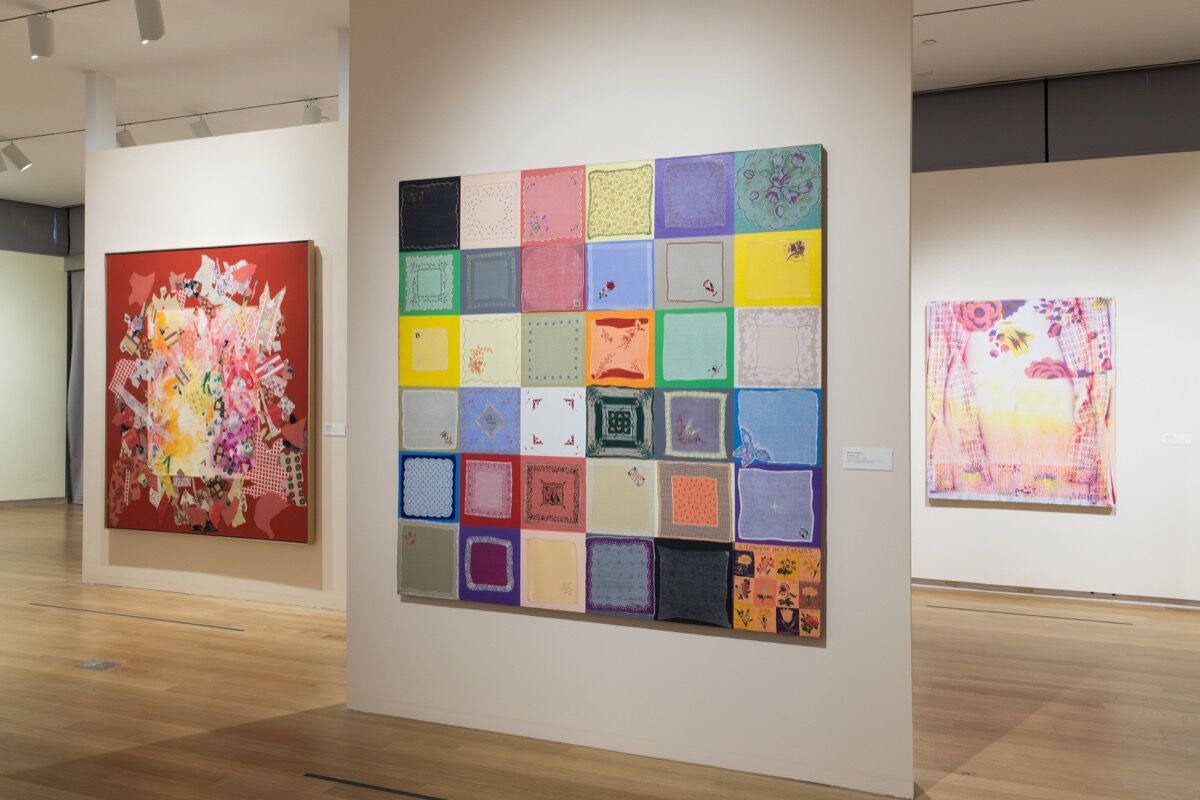 An exuberant tackiness infuses the femmages, or feminist collages, of the artist
Miriam Schapiro
, one of the leaders of the
Pattern and Decoration Movement
. Her canvases are bedazzled with rhinestones and foil stars, busy with flowers and thrifted fabric samples, or shaped like hearts. Some veer close to kitsch, while others evoke a grandmother’s living room. They are all, ultimately, unapologetically feminine.
Created predominantly in the 1970s and ’80s, they offer a colorful backlash to the works of the hypermasculine
minimalist
movement, which peaked in the 1960s. Schapiro’s canvases serve as an antithesis to
Donald Judd
’s stacks and
Carl Andre
’s squares from that decade, while developing a language that would influence generations to come.
Now on view at New York’s Museum of Arts and Design (MAD), “Surface/Depth: The Decorative after Miriam Schapiro” celebrates both the artist (who died in 2015) and her aesthetic offspring. Curator Elissa Auther interspersed 29 Schapiro pieces with multimedia works by nine contemporary artists like
Sanford Biggers
and
Ruth Root
, some created specifically for the occasion.
“Schapiro’s objective in embracing the decorative was to catalyze a transformation in the perception of materials, processes, and styles rooted in craft, women’s experience in the home, and everyday forms of making,” Auther said at the exhibition opening. 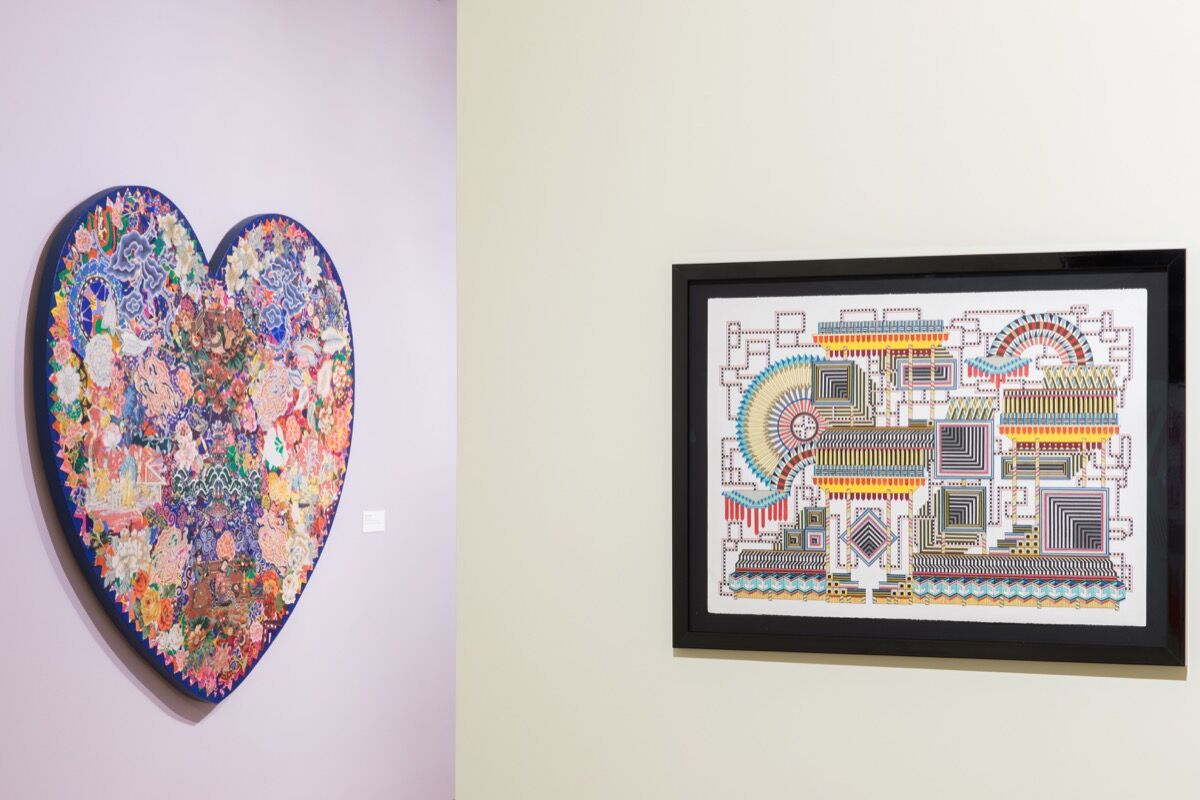 In the artist’s The Beauty of Summer (1973–74), multicolored flower patterns flood a background filled with diamond shapes resembling handkerchiefs. Edges blur together, complicating the viewer’s understanding of the underlying process and structure. One of the latest Schapiro pieces in the show, House of Summer’s Night (1980), features a pointed, house-shaped canvas with similarly shaped interior pentagons demarcated by rhinestones and fabric. The home becomes a valid source of creative inspiration: It literally gives shape to the painting.
Schapiro was born in Toronto in 1923, migrating to Brooklyn with her family during the Great Depression. She received a masters degree in fine art from the University of Iowa, where she met the artist Paul Brach (whose own oeuvre spanned geometric abstractions to landscapes). The pair married and moved back to New York, where Schapiro exhibited her work at what were then some of the city’s major galleries: André Emmerich, Tanager, and Stable. In 1967, they moved to California when Brach got a teaching appointment at the University of California, San Diego (UCSD). Schapiro’s nascent feminist beliefs became central to her practice as she integrated herself into West Coast academic and artistic circles.
Though Schapiro was creating hard-edged abstractions in the late 1960s, they evidenced the concerns that eventually and more elaborately filled her femmages. Schapiro’s Big Ox and Side Ox (both 1968), for example, feature X-shapes with round, gaping holes at their centers. Like her contemporaries
Judy Chicago
and
Hannah Wilke
, she used this “central core imagery,” or vaginal form, to infuse power into feminine iconography and encourage women to reclaim their bodies and sexuality. 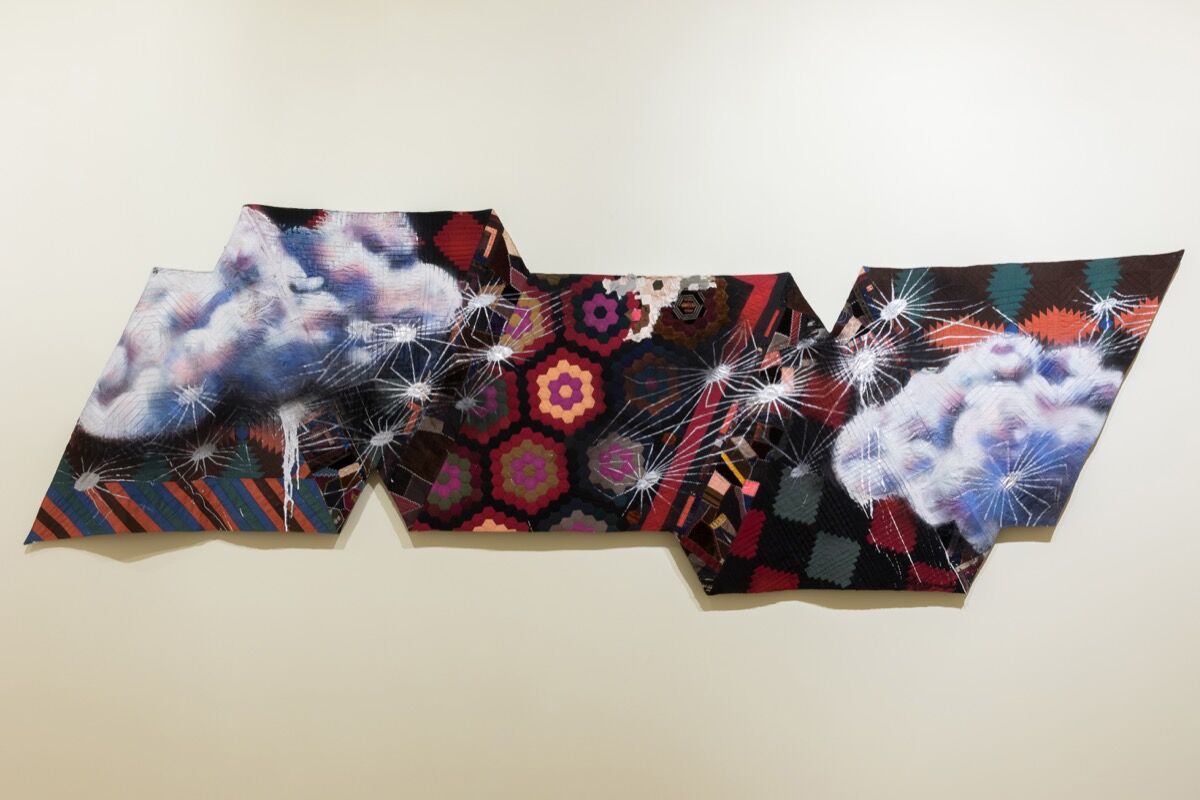 Advertisement
Schapiro taught first at UCSD, then at CalArts, where she encountered radical new ideas about art education. In a 1989 interview, she set the scene: students and instructors practicing tai chi at 6 a.m., while elsewhere, a design class made radios to send to developing nations, and West African dancers performed in the hallways. In this open-minded environment, Schapiro introduced what she called the Feminist Art Program, and brought in Chicago to help facilitate it. They transformed an abandoned Victorian mansion near campus into a performance and exhibition space, dubbed Womanhouse. Here Schapiro led consciousness-raising sessions where participants discussed femininity, domesticity, and maternity.
Around this time, Schapiro initiated her femmages, challenging preconceived notions that the decorative need be superficial. She found a supporter in Holly Solomon, a New York gallerist who eventually exhibited the work along with that of
Joyce Kozloff
,
Robert Zakanitch
, and other artists interested in similar issues. Their movement became known as Pattern and Decoration, which critic Holland Cotter once called “the last genuine art movement of the 20th century, which was also the first and only art movement of the postmodern era and may well prove to be the last art movement ever.”
Schapiro and her cohort, says Auther, politicized their materials and “pointed out the ways in which that hierarchy between art and craft is related to broader social hierarchies of race and gender.” Not everyone approved, though, of Schapiro’s embrace of the domestic. According to Auther, “shortly after this, in the late ’80s early ’90s, the rise of conceptual feminist artists like
Barbara Kruger
was often perceived as more sophisticated in a theoretical way.” Artist
Josh Blackwell
, whose work Neveruses à Table (me and LP) (2018) is included in the MAD show, met Schapiro in 1998 while he was in graduate school at CalArts. Invited to give a lecture, she instead led a consciousness-raising session. He recalls how Schapiro prompted the students to discuss how they came to feminism. Blackwell told Artsy that his grandmothers, who made clothing and served as his role models, helped him understand the importance of placing women “in positions of determining their own fate.” For the exhibition, Blackwell mounted his “neveruses” (recovered plastic bags adorned with colored fibers) on the legs of an upturned table. In the spirit of Womanhouse, his pieces come together “to share some kind of communal thing, a meal or an event or a conversation, and hopefully start a broader conversation with the viewer,” he said.
Another artist in the exhibition, Ruth Root, incorporated an image of Schapiro and Chicago into a new work, Untitled (2018). The shaped canvas (one of Root’s hallmarks) features a slanting, scalloped edge and a pink section on top with rows of images referencing her own influences. Images of
Patti Smith
and works by
Eva Hesse
and
Lee Bontecou
appear. Root saw a connection between Womanhouse and the punk rock scene that emerged in the 1970s, though what most struck her about Schapiro’s work was its materiality. “I loved all the fabrics and the glitter,” she told Artsy. “And when they’re together, you can’t tell what’s painted and what’s collaged.” This ambiguity helps eliminate the hierarchy between art and craft that Schapiro sought to undermine.
In a document titled “Waste Not Want Not,” on view in a museum vitrine, Schapiro and her co-author Melissa Meyer write: “Now that we women are beginning to document our culture, redressing our trivialization and adding our information to the recorded male facts and insights, it is necessary to point out the extraordinary works of art by women which despite their beauty are seen as leftovers of history.” At MAD, Auther and her team are continuing this effort to ensure that Schapiro’s work enjoys its part in an alternate legacy.
Alina Cohen
Related Stories