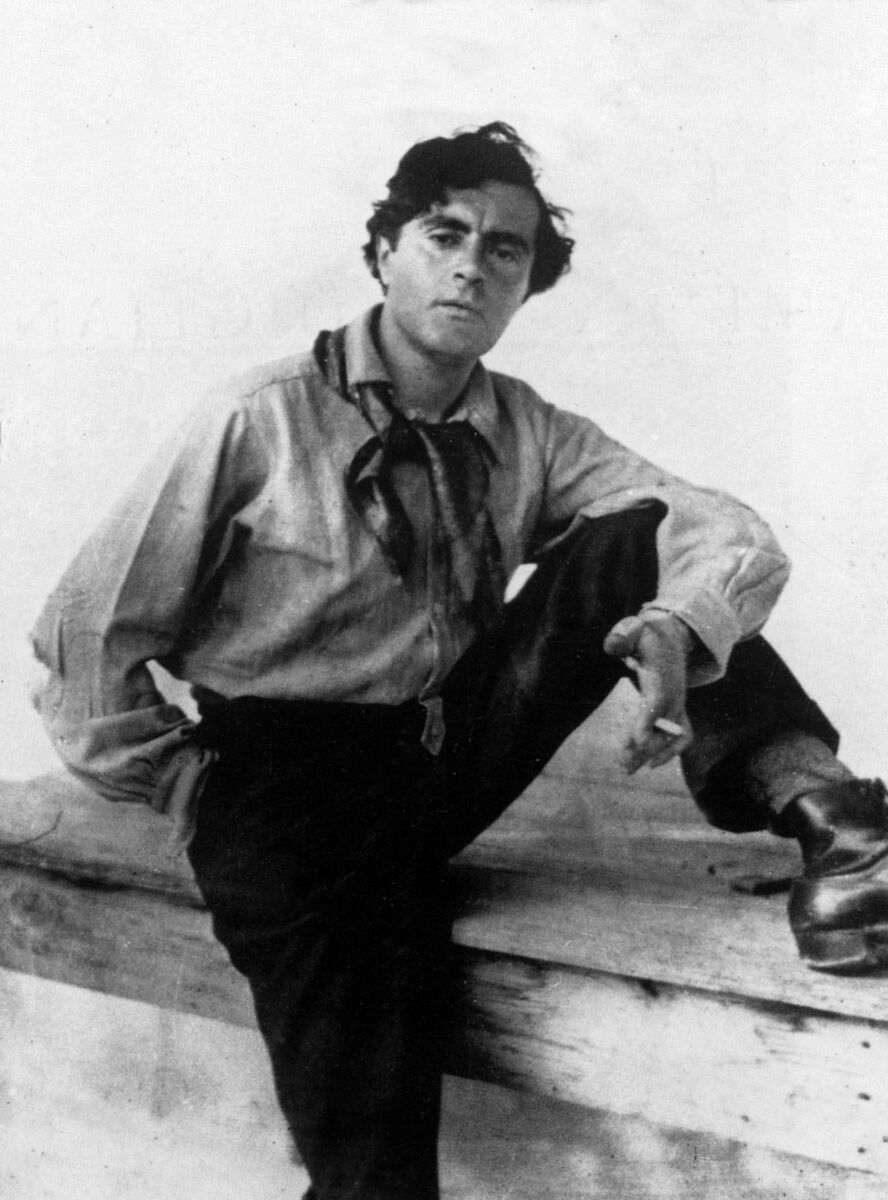 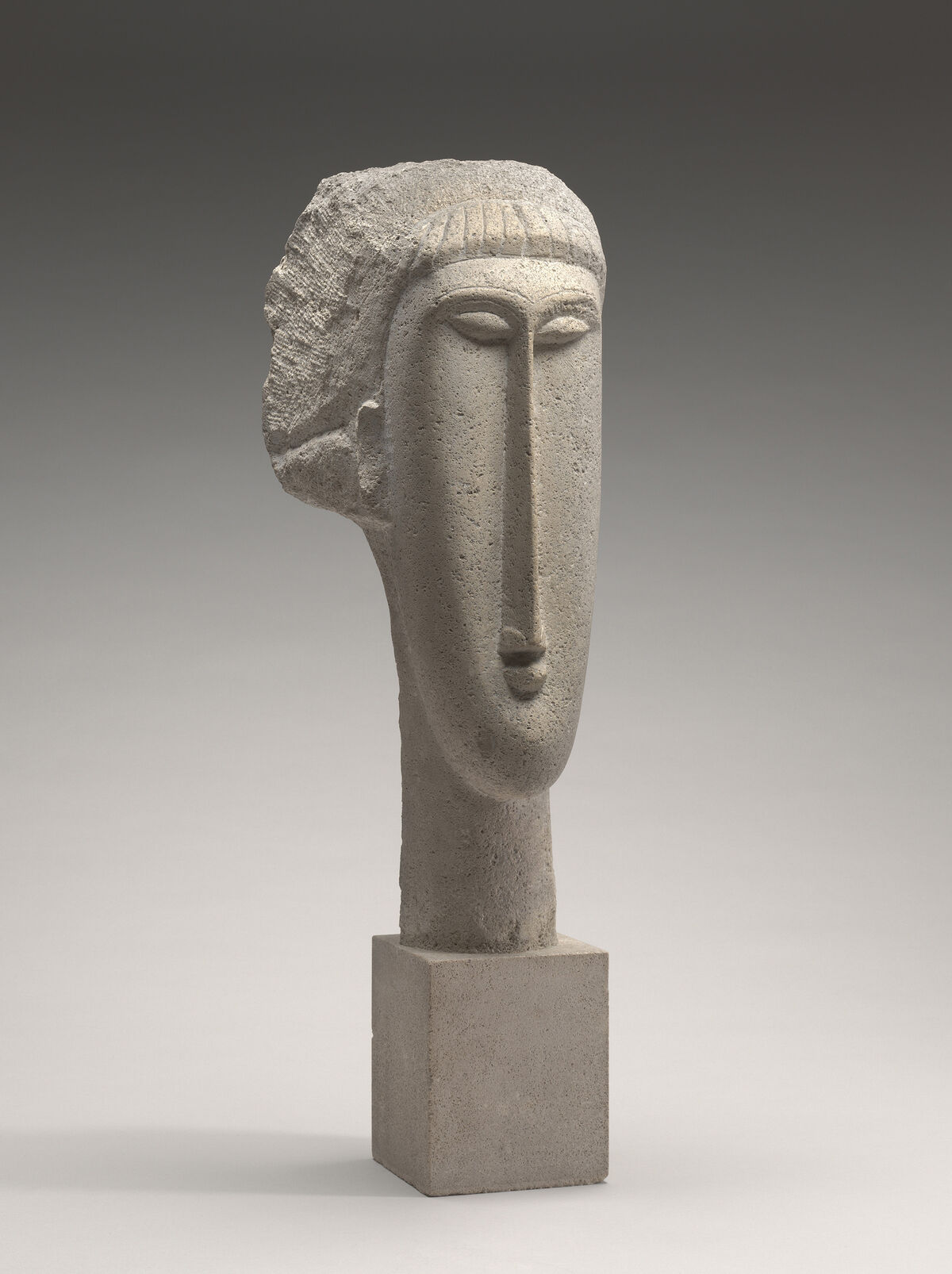 The uniformity of
Amedeo Modigliani
’s late portraits is one of the great curiosities of modern art history. But for anyone who thinks the Italian artist was experimenting only with the abstraction of
portraiture
, depicting each sitter as though they all hailed from the same long-faced, almond-eyed, tiny-mouthed family, it’s intriguing to learn that he had some deeply personal reasons for depersonalizing his portraits.
“He was really questioning the fixity of identity,” says curator Mason Klein, who has brought to life “Modigliani Unmasked,” an exhibition at the Jewish Museum that considers this aspect of the artist’s work, on view from September 15th through February 4th.
Reconsidering Modigliani’s late output in the context of his early drawings, Klein makes a strong case that this stylistic tendency, which we so closely associate with the artist, grew out of his upbringing in Italy and experience as a French-speaking, Italian Sephardic Jew in Paris during the first quarter of the 20th century. What emerged in Klein’s research was Modigliani’s legacy in challenging racial labels and the hegemony of European culture, all while embracing globalism, several decades before the West started doing so.
On view in the U.S. for the first time, the 150-some drawings that will be on display in the exhibition hail from the descendants of Dr. Paul Alexandre, Modigliani’s most devoted patron in Paris. They constitute around a third of the long-hidden cache of his work that remained unseen until the book Unknown Modigliani: Drawings from the Collection of Paul Alexandre was published in 1993. 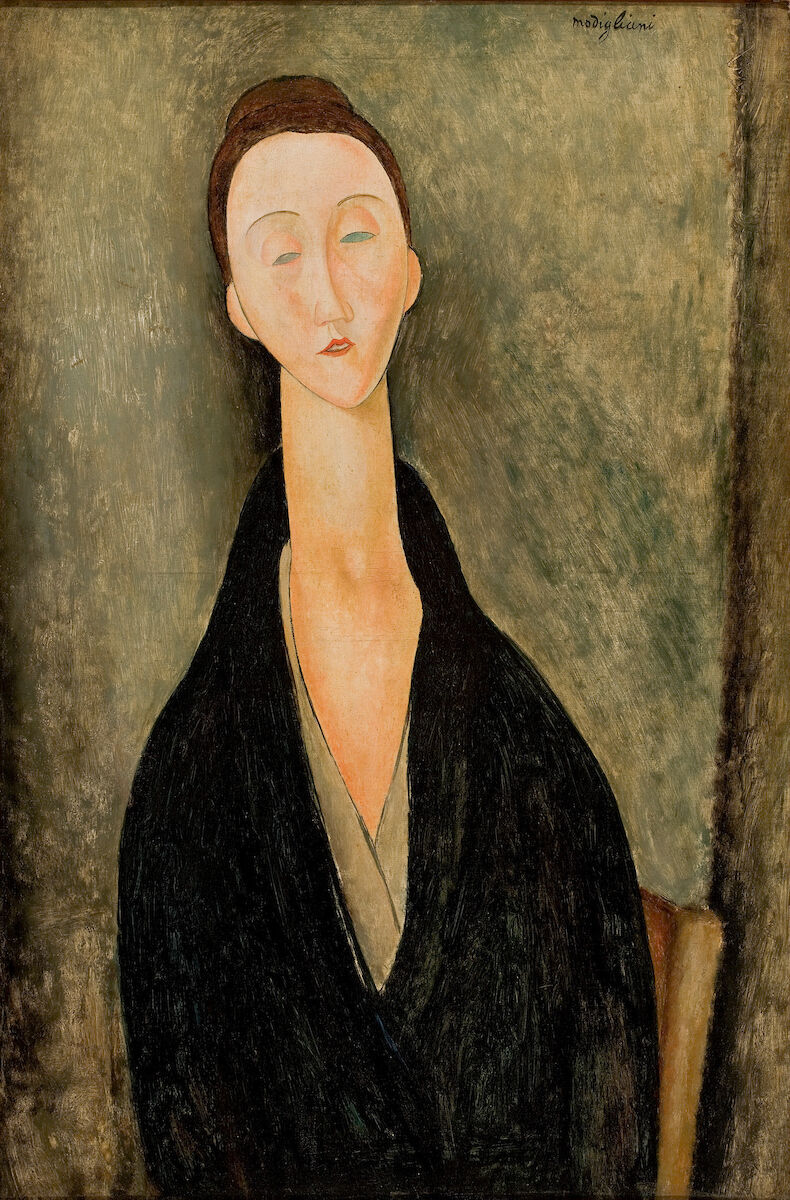 Amedeo Modigliani, Nude with a Hat, 1908. Courtesy of the Reuben and Edith Hecht Museum, University of Haifa, Israel and the Jewish Museum.

Klein frames the drawings as a kind of connective tissue between his early, more expressionistic paintings like The Jewess (1908), a stunning
Fauvist
work from 1906, and his later portraits and nudes that have his trademark mask-like visages. Made largely between 1908 and 1912, the drawings range from preparatory sketches for his limestone heads and caryatids to rough illustrations of portrait sitters. Together, they show an openness to cultural hybridity, which was not by chance.
While most people may remember Modigliani as the consummate tragic bohemian, a hash-smoking, absinthe-drinking pauper whose death from tuberculosis at the age of 35 prompted his pregnant lover Jeanne Hébuterne to jump to her death, “the Hollywood popularization of his life doesn’t really consider the social imperatives that drove him to alight on non-Western art in his own manner,” says Klein.
Born to Sephardic Jewish parents in 1884 in Livorno, Italy, Modigliani was raised largely by his erudite French-born mother and aunt after his well-to-do family met financial ruin. When the family business went bankrupt, the two women opened a language school in town, and taught Modigliani French and English. They also nurtured his love of artmaking.
Sickly from a young age—he had pleurisy at 11, typhoid at 14, and tuberculosis at 16—the boy spent hours in bed memorizing Dante and reading the works of Nietzsche and pre-enlightenment Dutch philosopher Baruch Spinoza, who, according to Modigliani’s matrilineal family, was a distant relative. (This is widely disputed.) When he wasn’t convalescent, he went to art school and steeped himself in the Classical and Renaissance art that filled Italy’s museums. 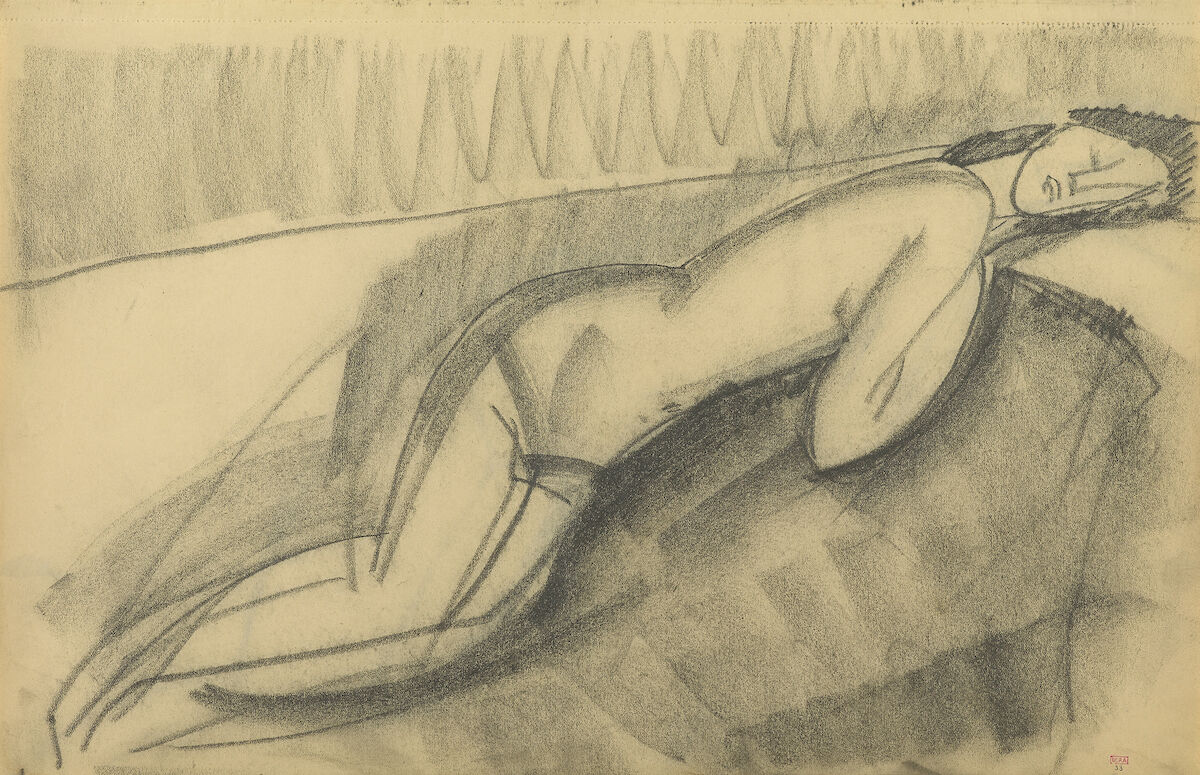 Advertisement
A port city with an open-door policy, Livorno had no Jewish Ghetto, unlike the cities of Eastern Europe and some other regions of Italy. But the country had spent much of the 19th century unifying its independent states, and was somewhat of a cultural hodgepodge—parts of it far more open to outside influence than other European countries at the time.
Paris, on the other hand, was a hotbed of xenophobia and anti-Semitism when he arrived there in 1906 in search of the city’s notorious avant-garde art scene. “There was this huge nationalist movement in France to purge foreign and ‘impure’ elements,” says Klein, who points out the popularity at that time of pseudo-scientific theories that classified facial features to construct and justify racial hierarchies, like the racist sheets of Édouard Drumont, which brutally vilified Jews.
“It was something so new to Modigliani,” says Klein. “But he was uniquely situated to deal with it. The 19th-century Risorgimento [or unification] in Italy and its universal ideals of social discourse, political discourse, religious discourse—he was triangulating all of that.”
To Modigliani’s advantage, he spoke French fluently and looked more Latin than Jewish. “
Chagall
said that in Paris at every step [he] was a Jew. Modigliani came there feeling like he belonged,” explains Klein. 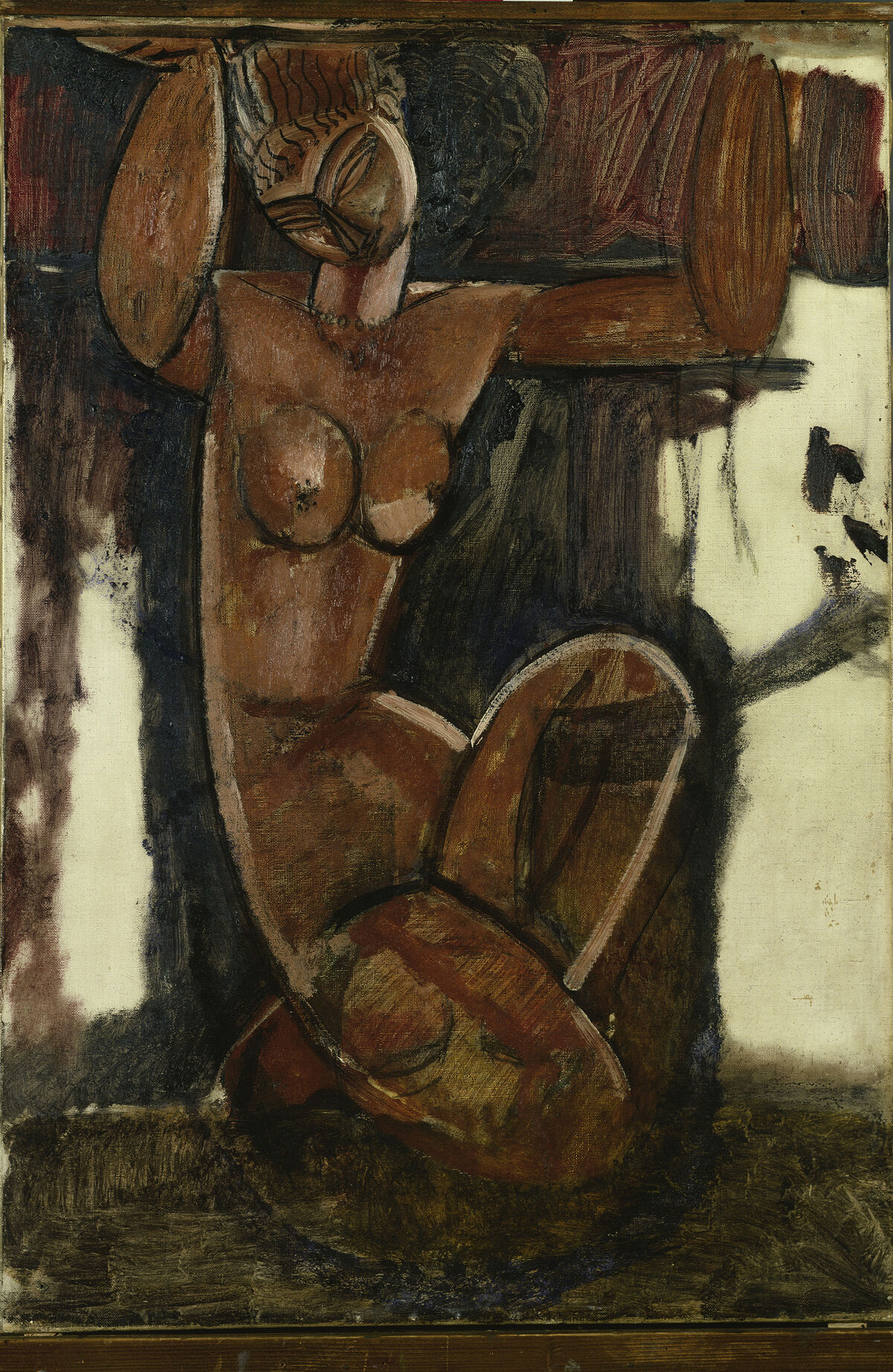 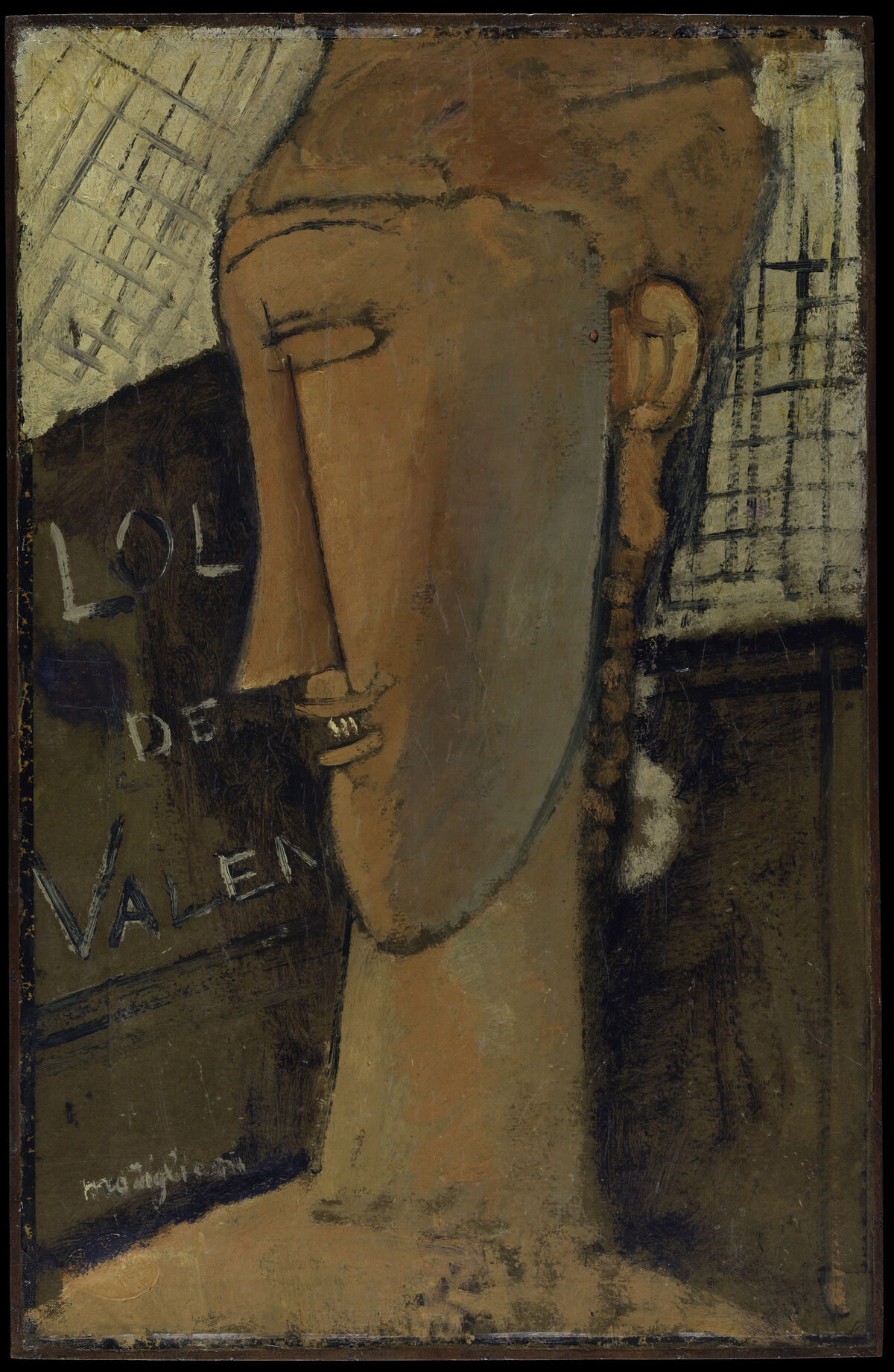 The artist was also famously easy on the eye and managed to dress stylishly even when he couldn’t pay rent in Montparnasse and later Montmartre. (
Pablo Picasso
reportedly once said that Modigliani was the only man he knew who knew how to dress, while Modigliani said of his rival that talent was no excuse to dress poorly.)
It’s not surprising that history has remembered Modigliani more for his rakish bohemian ways than his ethnic Jewishness (he wasn’t exactly practicing), although the ease with which he masked his ethnicity prompted him to announce it; he often introduced himself by saying, “I am Modigliani, the Jew.”
“The show is about understanding his work in an integrated way, [exploring] how he was struggling in his early work to figure out conceptually and pictorially how to deal with all these issues,” says Klein.
One way of dealing with it was to look far and wide for inspiration. It was at the popular Musée d’Ethnographie du Trocadéro, the city’s first anthropological museum (founded in 1878 amid a flurry of fascination with Europe’s exotic colonial conquests), where he came across the non-Western heads we see the influence of in his sculptures from around 1909 to 1914—busts that merge elements of North African, Southeast Asian, and Pacific Island art with Cycladic art and Renaissance Classicism. 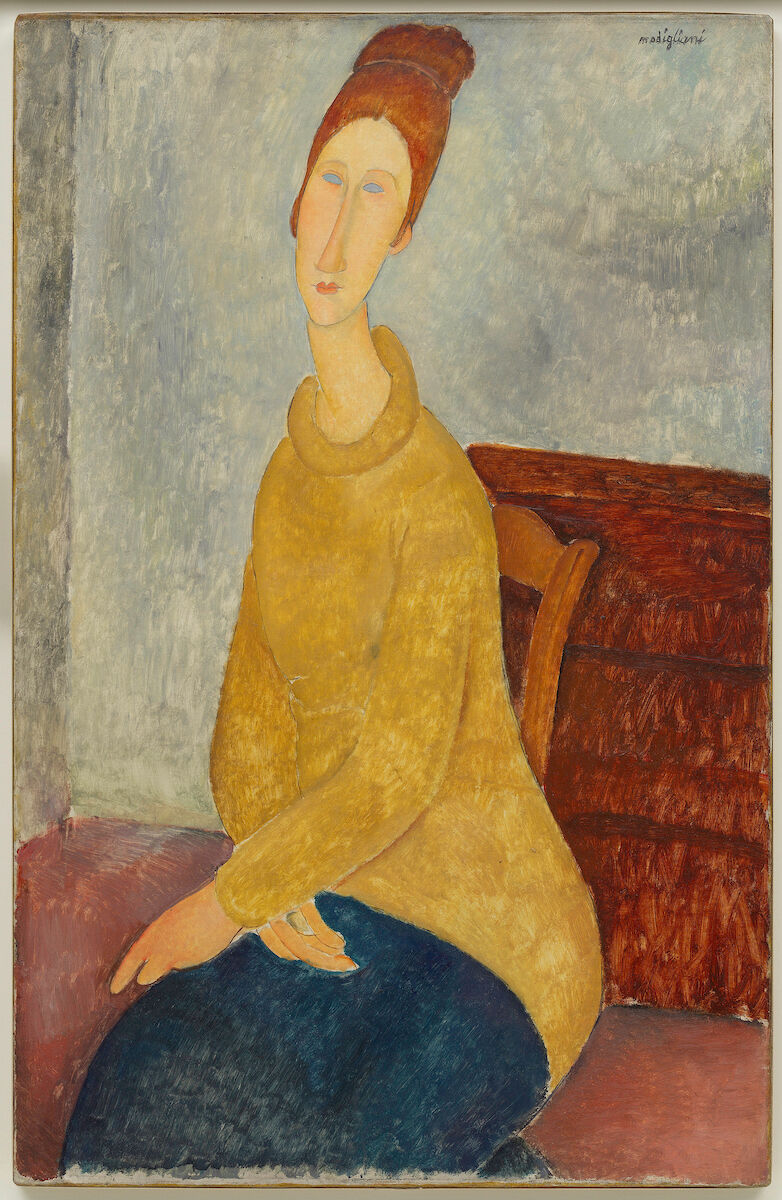 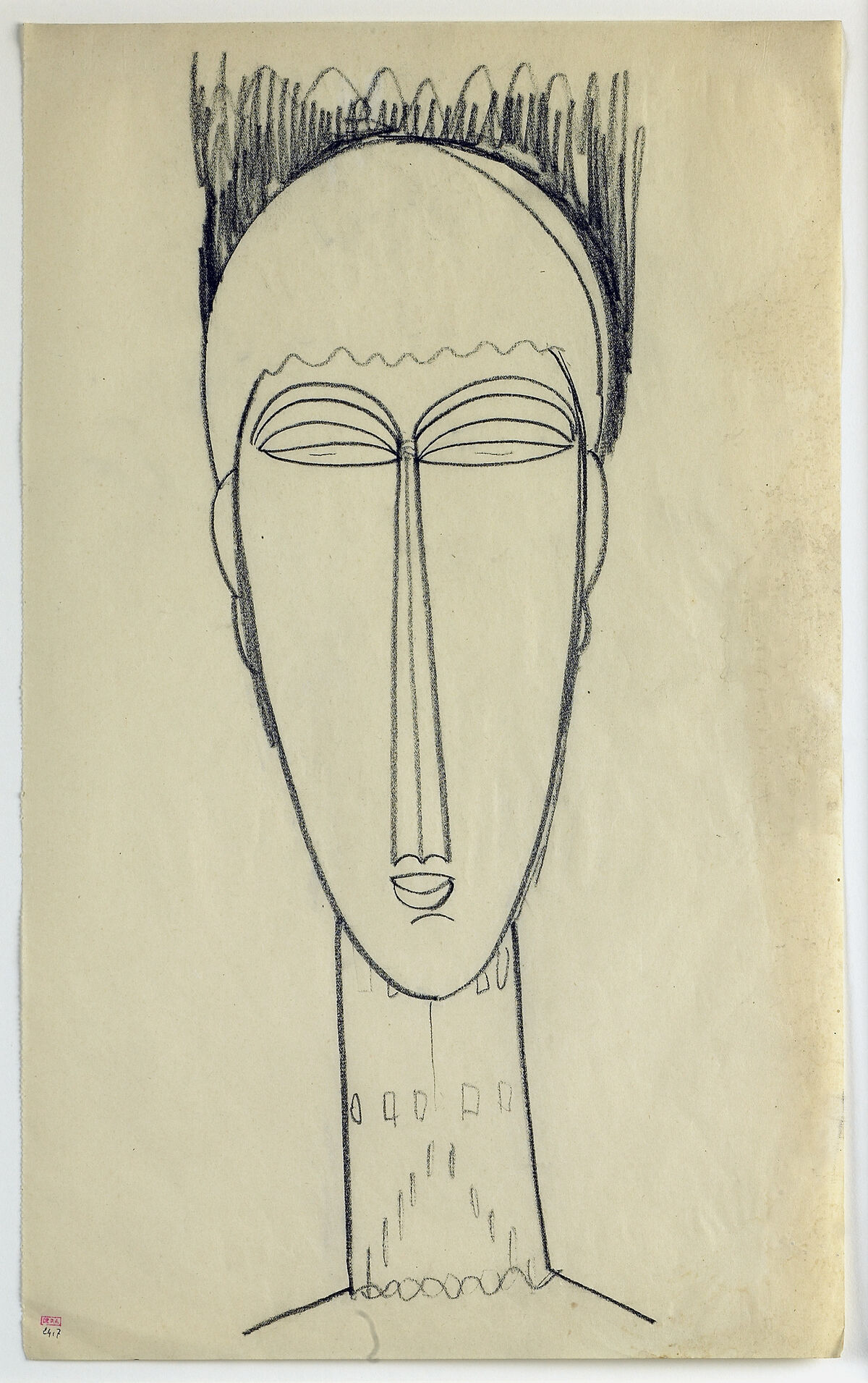 It’s in these works that we see him working out the dramatically elongated noses and ovoid eyes that would become a trope of his sculptures and, of course, of his later paintings, after his declining health forced him to stop sculpting and return to the brush. (It turns out stone dust isn’t great for tubercular lungs, as well as being difficult to obtain.)
“He wasn’t seeing difference as much as parity,” says Klein. It’s more of a gentle hybrid of different ethnic and cultural sources than the fantasy of savage otherness that Picasso conjured in Les Demoiselles d’Avignon (1907). “He wasn’t interested in exploiting the myth of the hypersexualized woman the way that Picasso did,” he says.
Modigliani’s trademark stylized features resolved first in his drawings, but became fully developed in his portraiture. “It’s almost like this global consciousness way before the word ‘global,’” says Klein. “That was a prescient moment—a unifying rather than an alienating aspect, which is very relevant to today.”
—Meredith Mendelsohn
Related Stories