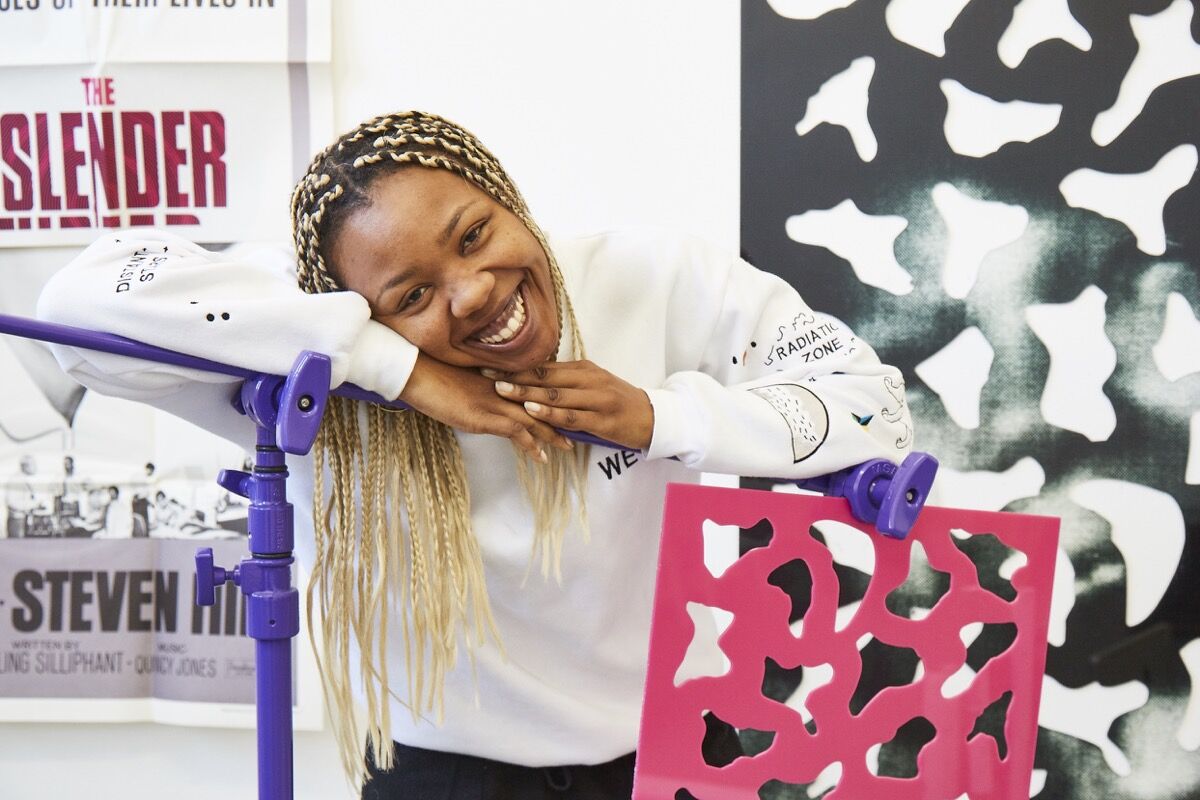 Social media makes Martine Syms paranoid. When the video sharing app Vine first launched in 2013, the 29 year-old artist feared that someone would secretly record her “doing something ridiculous” and upload the footage as a six-second-long loop that would go viral.
She believes this fear is valid in our ever-more surveilled world. “If I see a friend on the street and they don’t see me, I always take a photo of them and send it to them,” Syms says, laughing. “That may be weird, but there’s this awareness that we are being recorded all the time.” She pauses and says, “If I could access all the recording of me happening at one time, what might that look like?”
Sitting in a conference room at the Museum of Modern Art, Syms shares her social media anxiety and her theory of how the historical surveillance of black people, from slavery up to the present, has produced a more performative black identity—echoing Simone Browne’s 2015 book Dark Matters, in which the theorist calls the tracking of black individuals and the effects of the contemporary proliferation of digital technologies, “dark sousveillance.”
When Syms and I meet, it’s just a few days before the artist’s first solo museum show, “Projects 106: Martine Syms,” will open at MoMA. The central work in the installation, Incense, Sweaters, and Ice (2017), is a non-linear narrative film that explores the contemporary performance and surveillance of blackness. 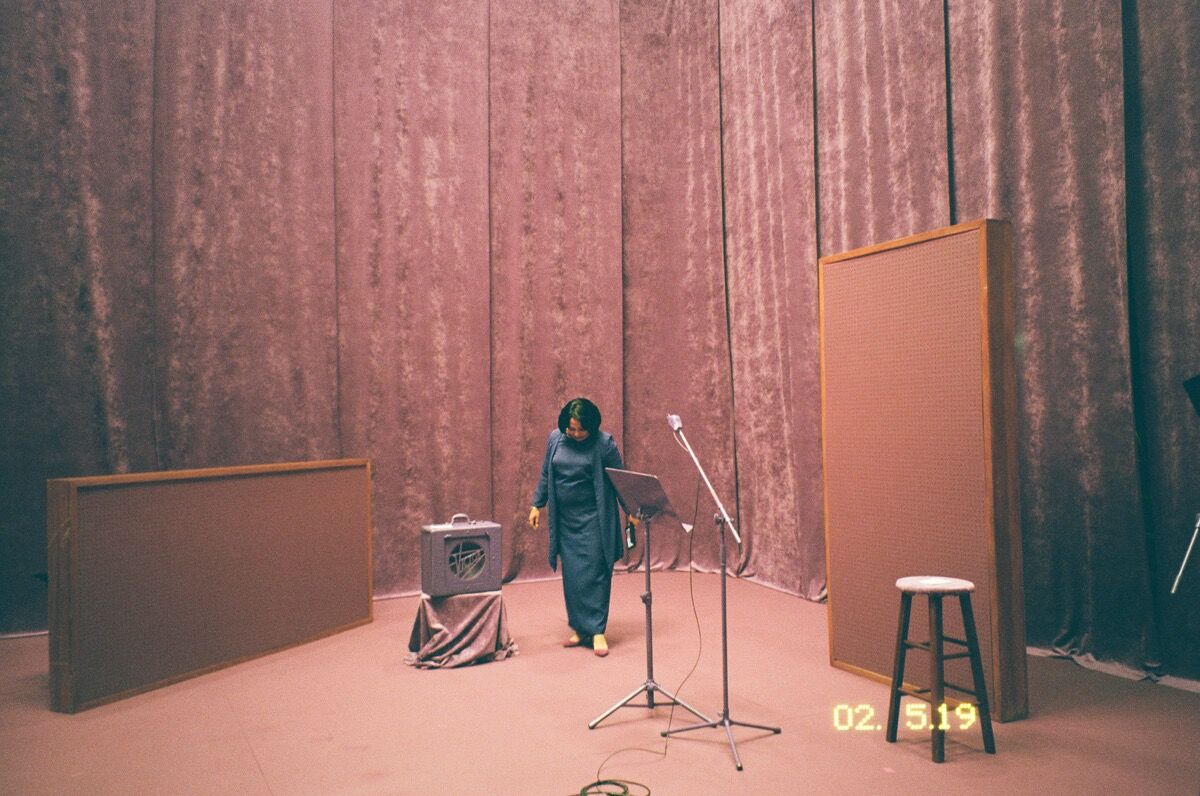 “Identity is presaged by surveillance,” says Syms. “Even if we think of pre-photographic technology, there was constant logging and cataloguing during the Middle Passage.” Before slaves had any idea what it meant to be black, they were made aware, argues Syms, because their experiences were recorded.
Syms is using her MoMA exhibition to probe this reality, as well as to explore the idea of high-functioning identities, “like the way you might talk about a car and how to best succeed in the world and to best present yourself,” she says. She draws influence from the French philosopher Michel Foucault’s theories about the way in which surveillance “disciplines” the body, and the queer rapper Le1f’s ideas of performative identities. (The latter were particularly informative for Incense, Sweaters, and Ice.)
The structure of the 72-minute feature length film is largely inspired by the Great Migration, which saw some six million African Americans, including Syms’s own family, leave the American South for the Northern and Western United States in search of opportunity and freedom during the first half of the 20th century.
The film’s central protagonist, Girl, a twenty-something black woman, embarks on a reverse migration over the course of a week. It’s a passage that many black families have taken in recent years. She returns to the “New South” in search of jobs and a quality of life that post-industrial urban centers have failed to provide. The piece follows her trajectory—from her life in Los Angeles, to a family dinner in her hometown of St. Louis, Missouri, to working as a nurse in Clarksdale, Mississippi. The scenes play out on three screens and viewers move between them to watch the drama unfold. 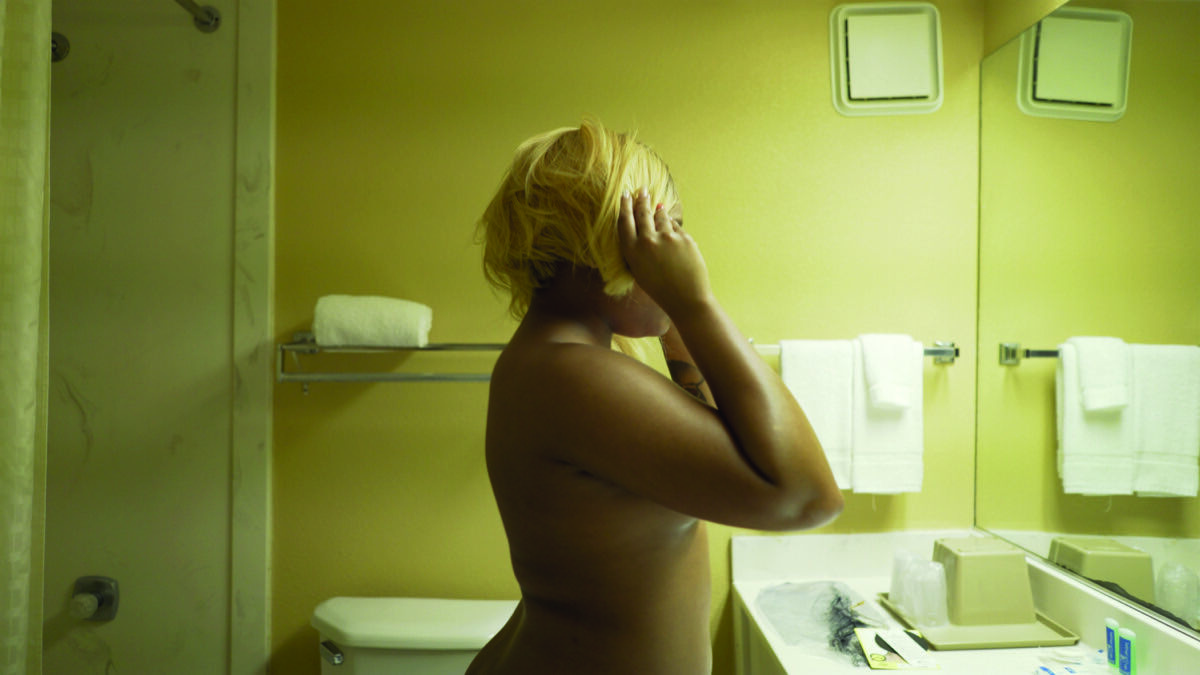 Advertisement
Scenes of Girl’s journey are intercut with monologues delivered by Mrs. Queen Esther Bernetta White, the young woman’s aunt and a self-help guru largely based on Maxine Powell, a renowned Motown figure, who coached rising black stars of the 1960s on how to behave publicly. The character of Mrs. White also expands on Syms’s 2015 video work Notes On Gesture, which functions as something of a catalogue of black women’s body language.
Wearing a purple suit and appearing on a purple set, Mrs. White delivers one of her many comedic etiquette lessons, modeled after the ones Powell gave to Motown acts like The Supremes, the Jackson 5, and Marvin Gaye. “You’re going to practice substituting pleasant words for ugly words,” Mrs. White says in one scene, sitting at a baby grand piano. She raises her voice into a theatrical falsetto. “Just say a person is difficult! That’s enough. Takes care of everything.”
The dynamic between Girl and Mrs. White reveals a persisting generational gap between the ways in which black millennials and their grandparents conceive of appropriate public behavior. Mrs. White is less interested in word choice as she is in trying to protect black Americans from public humiliation or death. Girl’s behavior, meanwhile, speaks more to contemporary experiences of racial identity. We see her sharing herself in ways Mrs. White wouldn’t approve of: She engages romantically with a white man, dons a blonde wig at work, uses memes as a way of expressing emotion, and lets loose at a karaoke bar.
WB (“whiteboy”), Girl’s love interest, is represented in the form of contemporary digital technologies, through text messages, memes, and from behind the camera lens. He effectively mediates Girl’s public and private selves, in one scene filming her—a tactic employed by Syms to reveal art’s white gaze and suggest the way in which the black woman has been seen by Hollywood.
Girl sits on a couch reading Suzanne Scanlon’s Her 37th Year, an Index, a fictional novella that details one year’s worth of female desire. She asks him why he’s filming her, and then resigns herself to being consumed through his camera lens. While she’s being watched, Girl reads a passage of the book aloud: “I don’t want to become a power woman, masculinized, my hair done,” she says. “What they’ve created: nymphet cougar mother-in-law dame. No, I want to be punk about gooey mothering, punk about turning 38, 39, 40.” Girl wants to be free. 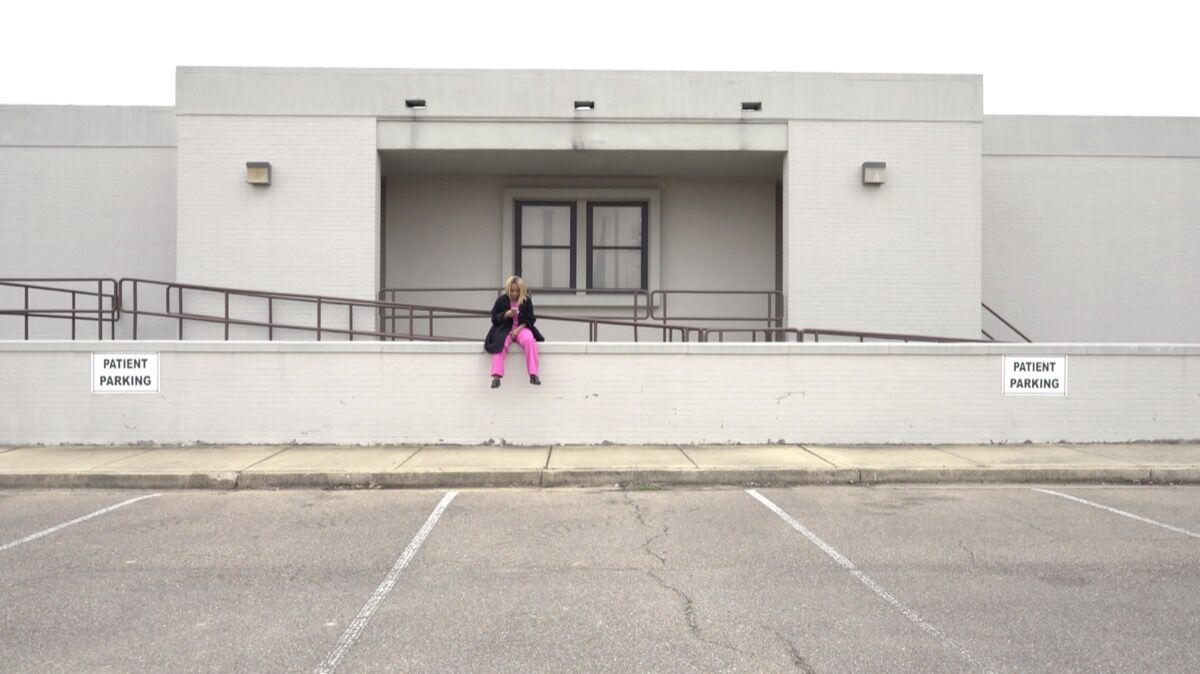 The way that images shape identity is a primary subject for Syms. “A lot of my work is about the meaning, value, and circulation of images in American culture,” she says. In “Projects 106,” this is communicated in part through Syms’s signature use of the color purple. The MoMA gallery and the mesh structure where viewers sit are painted purple. It’s a nod to the groundbreaking 1985 film The Color Purple, which mapped the spiritual and physical evolution of 20th-century black femininity through the life of Miss Celie. It’s also a way to expand Mrs. White’s purple set into the space.
Accompanying Incense, Sweaters, and Ice is a suite of movie posters that feature both scenes from the film and from black American classics like The Slender Thread and Shaft. The posters loosely outline, as Jacqueline Najuma Stewart does in her 2005 book Migrating to the Movies, how the 20th-century black exodus from the South coincided with the rise of the film industry.
The movie posters produce what the Los Angeles-based artist calls “real-time collages.” The installation also incorporates Syms’s augmented reality app WYD RN, which evolved out of her 2016 Broad museum performance, Misdirected Kiss. If you open the app and aim your phone at a mounted poster, it creates a double exposure of looping GIFs, memes, videos, and music on the poster’s surface, further exploring the history of the black moving image. 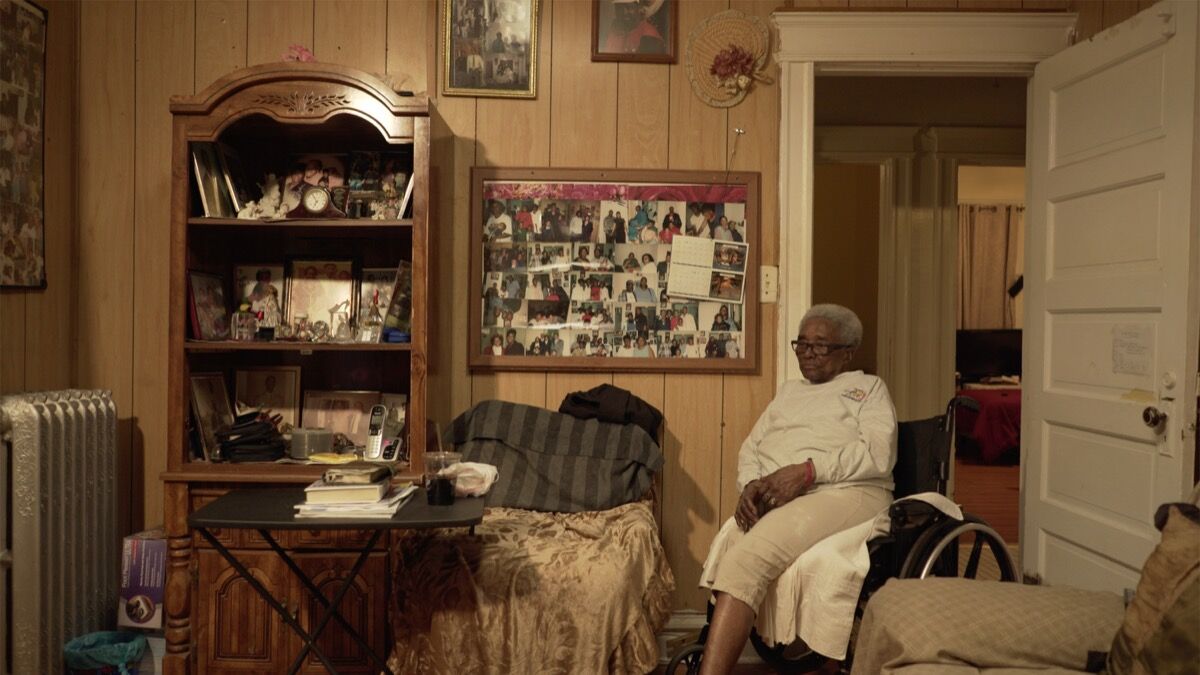 “I like to play with the conventions,” Syms says. “When I was invited to do a show at MoMA, I asked myself, what’s the most ambitious thing I could do? As an image-maker, I like to create images I’ve never seen.”
Syms’s moving images form a portrait of the way in which black identity is constantly being shaped through the experience of surveillance and the performance it gives rise to. And today, the digital world has made it that much easier to broadcast our lives, desires—our many different selves.
Syms’s Girl suggests that there might just be a glimmer of freedom in illusion.
Antwaun Sargent
Related Stories

15 New York Shows You Need to See This June 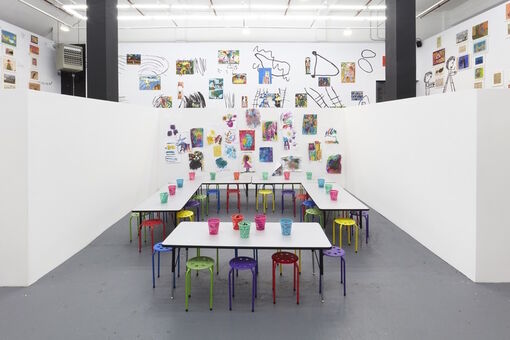