At MoMA, Photography Doesn’t Have to Reinvent Itself to Be Radical 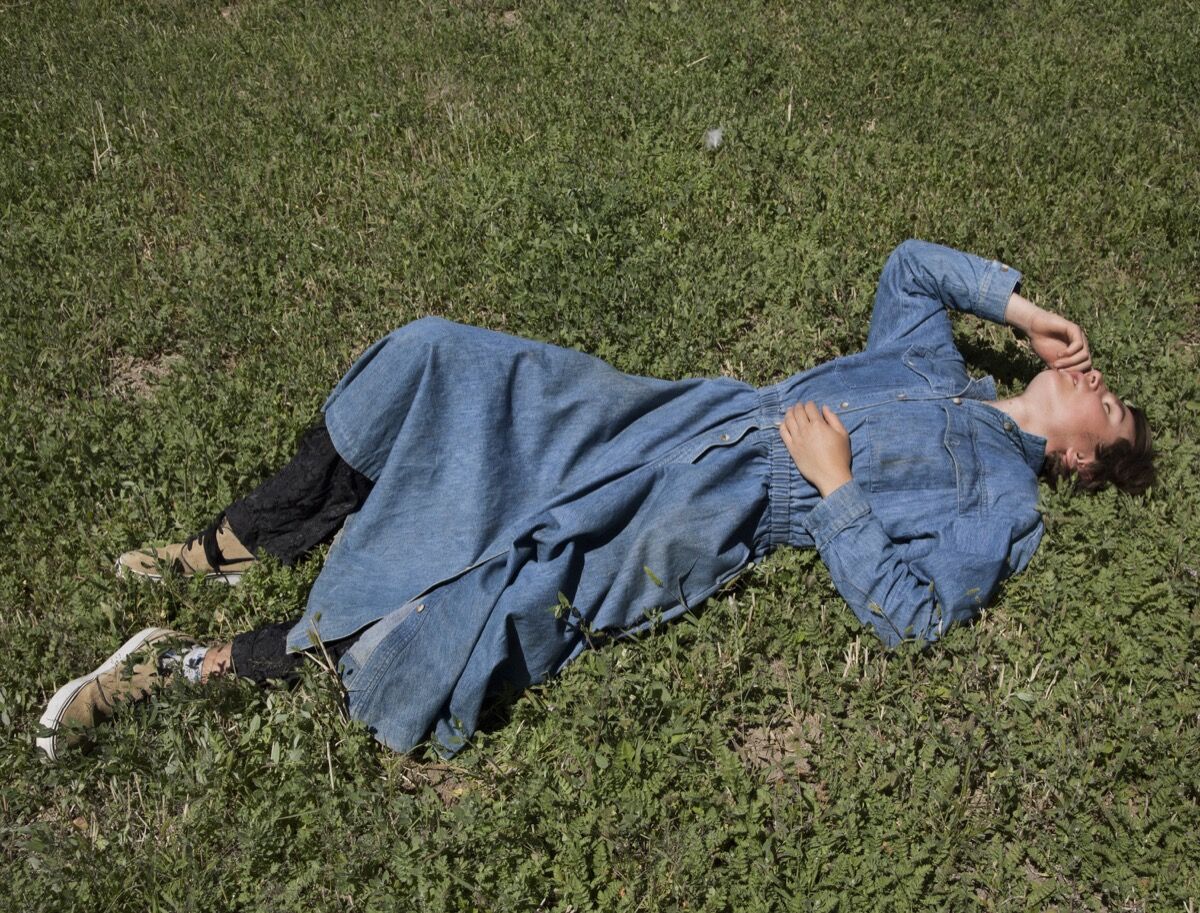 “Being: New Photography 2018” at the Museum of Modern Art sets itself up with a lofty, rather broad question: “How can photography capture what it means to be human?”
The much-anticipated survey of cutting-edge image makers—which launched in 1985, and has previously spotlighted talent from
Rineke Dijkstra
to
Philip-Lorca diCorcia
—doesn’t offer a single cohesive answer. But the exhibition does smartly investigate how photography continues to expand the possibilities of portraiture, the gaze, and what constitutes “documentary” imagery.
Previous artists in the “New Photography” series (
Katja Novitskova
in 2015;
Brendan Fowler
in 2013;
Amanda Ross-Ho
in 2010) are known for collapsing boundaries, often turning the photographic into something sculptural or installation-based. With the exception of
Em Rooney
here—whose pieces mix media and most explicitly ignore the definition of what a “photograph” can even be—much of the work in this edition of “Being” is relatively conventional in terms of technique and process. That doesn’t stop it from being quietly radical. 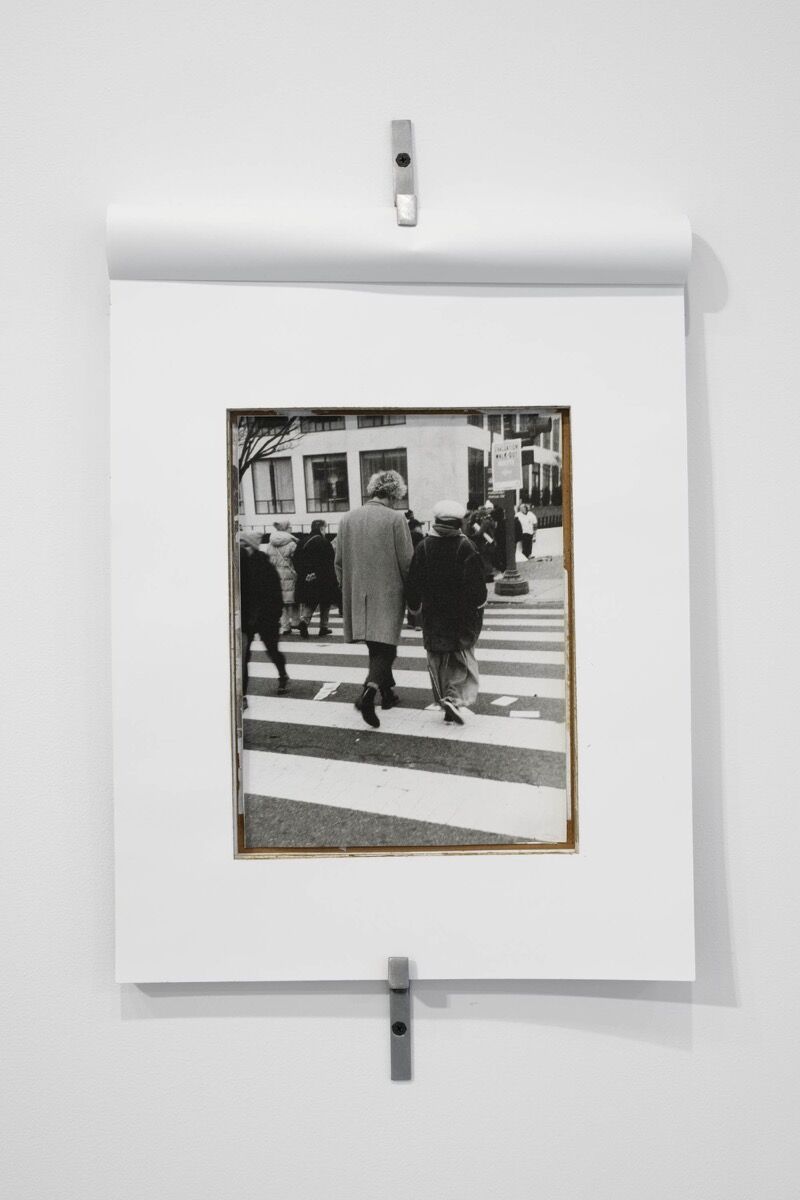 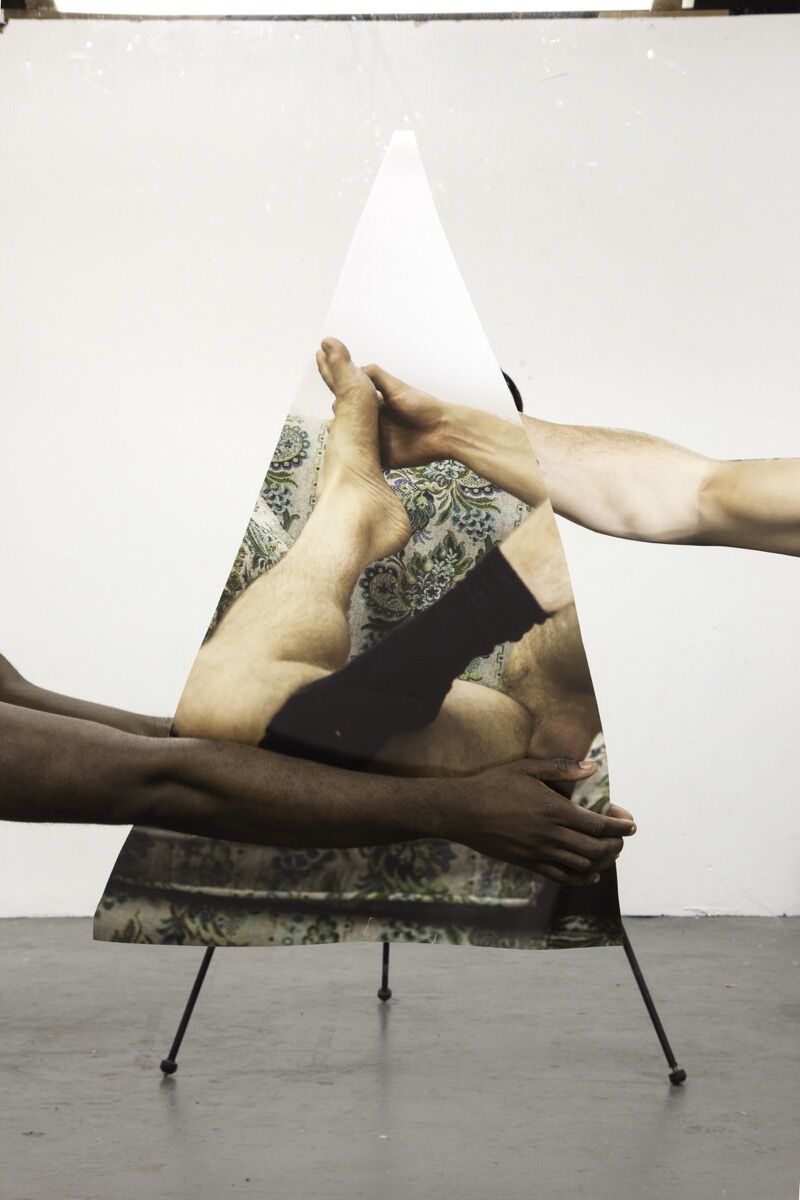 Andrzej Steinbach
and
Paul Mpagi Sepuya
both subvert the expectations of portraiture in distinct ways. A diptych of black-and-white pictures by Steinbach depicts the same striking woman—sporting a grey hoodie and a shaved head—from different angles. In the first, her body is tilted slightly, and she’s looking off-camera; in the second, she stares directly at the lens, as if the photographer has called for her attention. Individually, the photographs wouldn’t give much pause. Together, they constitute something quasi-cinematic and mysterious—an ordinary glance loaded with significance. Why capture these two moments in time? What came before, and what might come after?
Sepuya’s excellent studio portraits here are an interesting contrast. In most cases, we see only parts of male bodies, or reflections of them. Each image’s legibility is challenged by mirrors, gauze, or drapery that blocks a simple view. In Mirror Ground Study (2016), a camera lens pokes through a wall of fabric, as a little phallic intrusion. Elsewhere, Sepuya shows us bare arms reaching into the frame, or the athletic, curved back of a nude man. These are erotic images, but ones that benefit from being abstract rather than explicit; they tease and hide. Closest in spirit to these photographs are
B. Ingrid Olson
’s assemblages, which are Plexiglas dioramas in which fractured views of the artist’s own body are layered, often to the point of confusion. Both Olson and Sepuya suggest that the only way photography can capture the physicality of being human is through side glances and peek-a-boos, everything suggestive and incomplete. 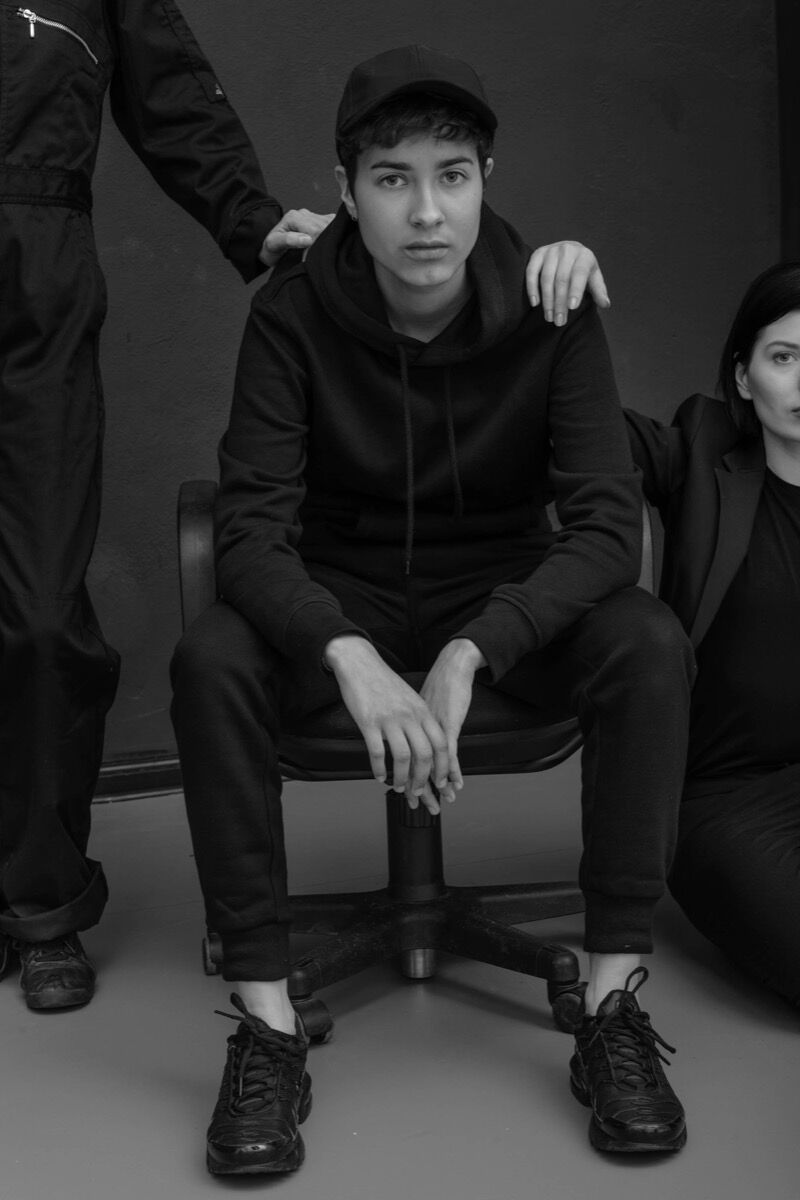 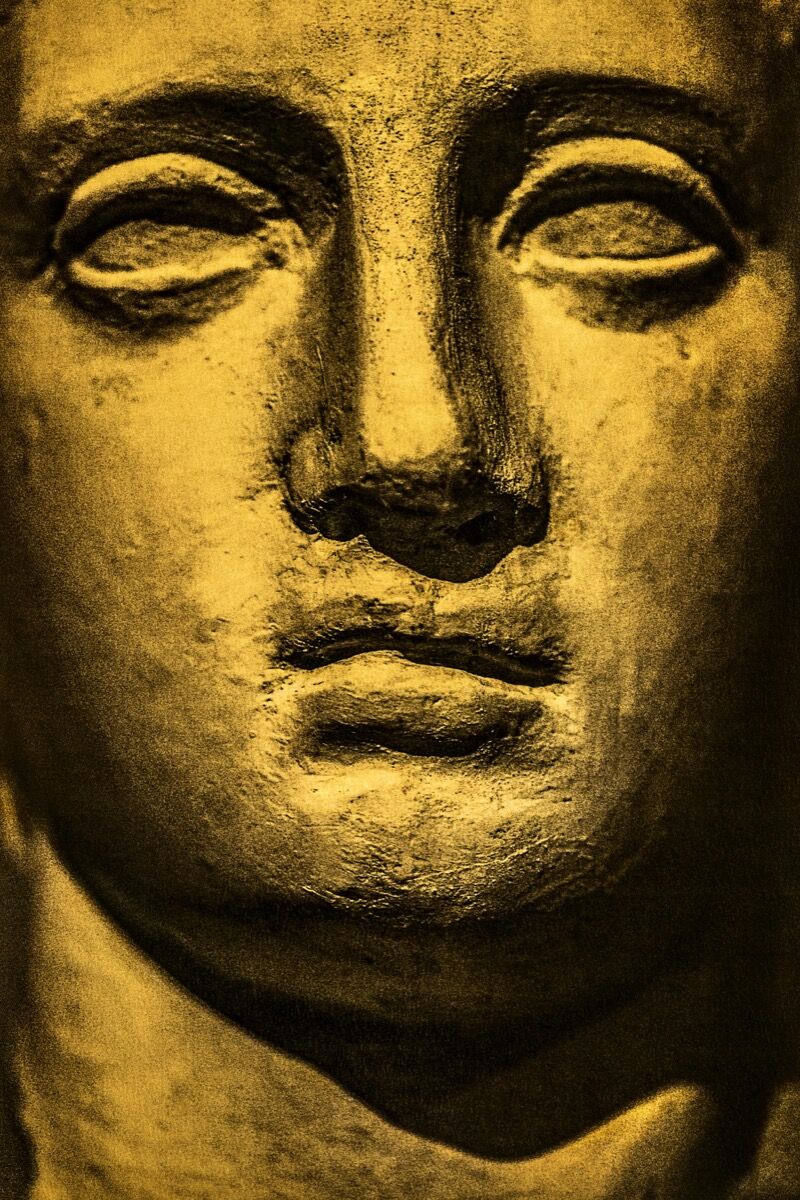 Advertisement
Sofia Borges
looks at the body by photographing tight details of classical statuary, which are then enlarged to unnerving effect. Yellow Chalk (2017) shows the head and neck of an unidentified sculpture. The image is tinted the titular color; the statue’s blank eyes and a subtle sneer telegraph an undefined feeling of disgust. Theatre, or Cave, a 2014 work printed here as a massive wallpaper, is even more effective. We see only a portion of the face of another statue, with one of its eyes removed. In both works, Borges seems to sympathize with the plight of her inanimate protagonists: struck by horror, yet speechless.
Joanna Piotrowska
, meanwhile, treats flesh-and-blood humans more like statues or sculptures in her photographs. In XXII, Frowst, three bodies pile atop each other on a lawn; in XXXIII, Frowst (both 2013–14), a woman leans backward, her weight supported by someone else’s hand. The focus of the picture is the marble-smooth swoop of her neck. In works from another untitled series on view, Piotrowska has her subjects build rudimentary structures out of furniture and belongings in their own apartment, which they then huddle underneath or inside. In this case, the human body becomes just another compositional element, like a couch or a desk. 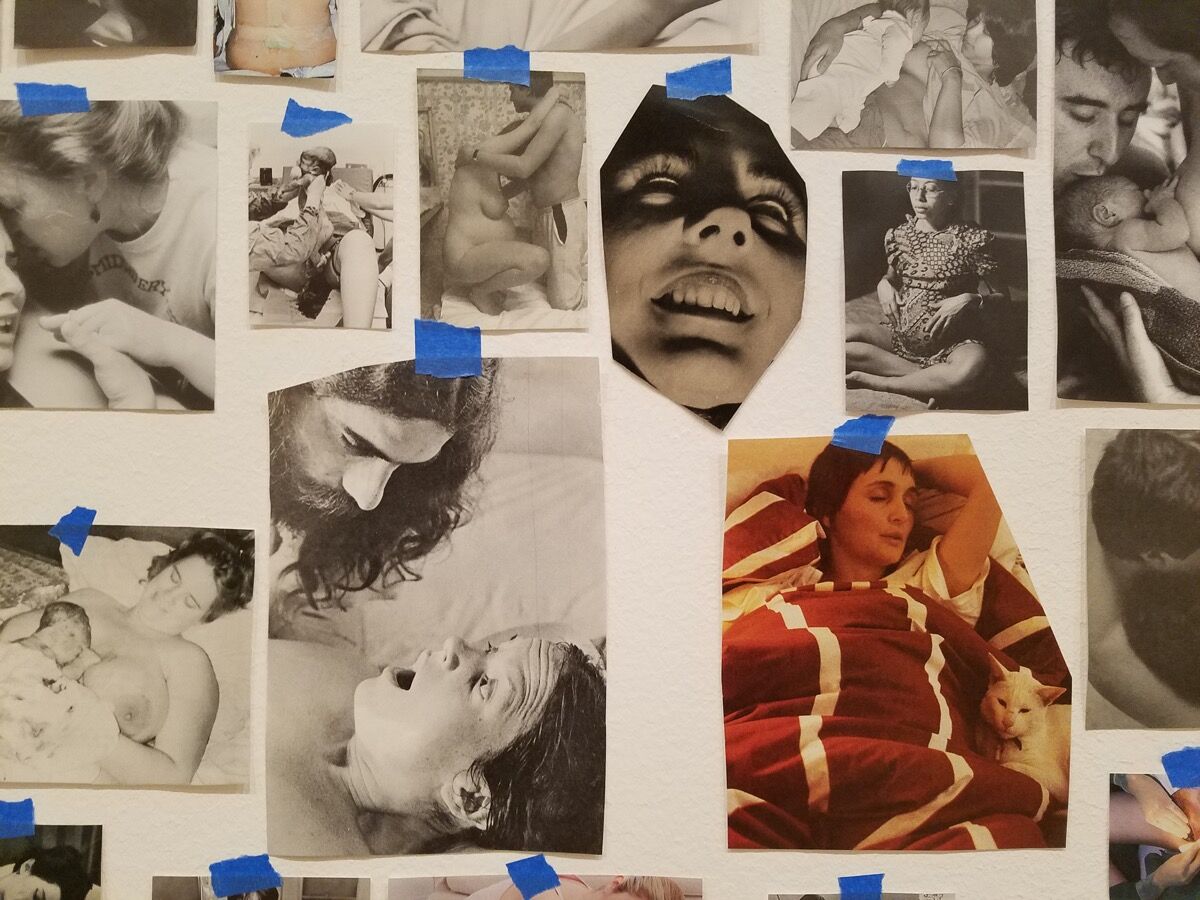 All of the works in “Being” are worth a close look, and offer additional evidence that fairly traditional photographic methods can still prove illuminating. That includes Matthew Connors’s street photography-style images from North Korea;
Sam Contis
’s gentle documentary photographs taken at the all-male Deep Springs College; or
Stephanie Syjuco
’s “Cargo Cults” self-portraits, in which she photographs herself costumed in what appears to be authentic “tribal” garb, belied by the intentionally visible clothing price-tags from cheap department stores.
But perhaps the most memorable inclusion in the show is
Carmen Winant
’s My Birth (2018), in which a short hallway is plastered with hundreds of found images depicting childbirth (as well as the moments before and after). Each unevenly cut-out image is stuck to the wall with a piece of blue gaffer’s tape. The sheer density communicates, all at once, a great range of conflicting emotion—ecstasy, pain, shock, joy. On one level, the serial conceit toys with birth as an obvious metaphor for the creative process itself. Winant’s title adds a further layer, almost comic, as if the artist herself is the one we’re seeing be born, again and again and again. And, of course, babies don’t see much at all in the first weeks of life, at least not very well. Like all of us at one point—like all of the artists in “Being”—they’re struggling to process and understand the confounding barrage of images, sorting out what matters, and what they might mean.
Scott Indrisek is a contributing writer for Artsy.
Related Stories