MoMA Took a Stand against Trump’s Immigration Ban. Here’s What Visitors Had to Say 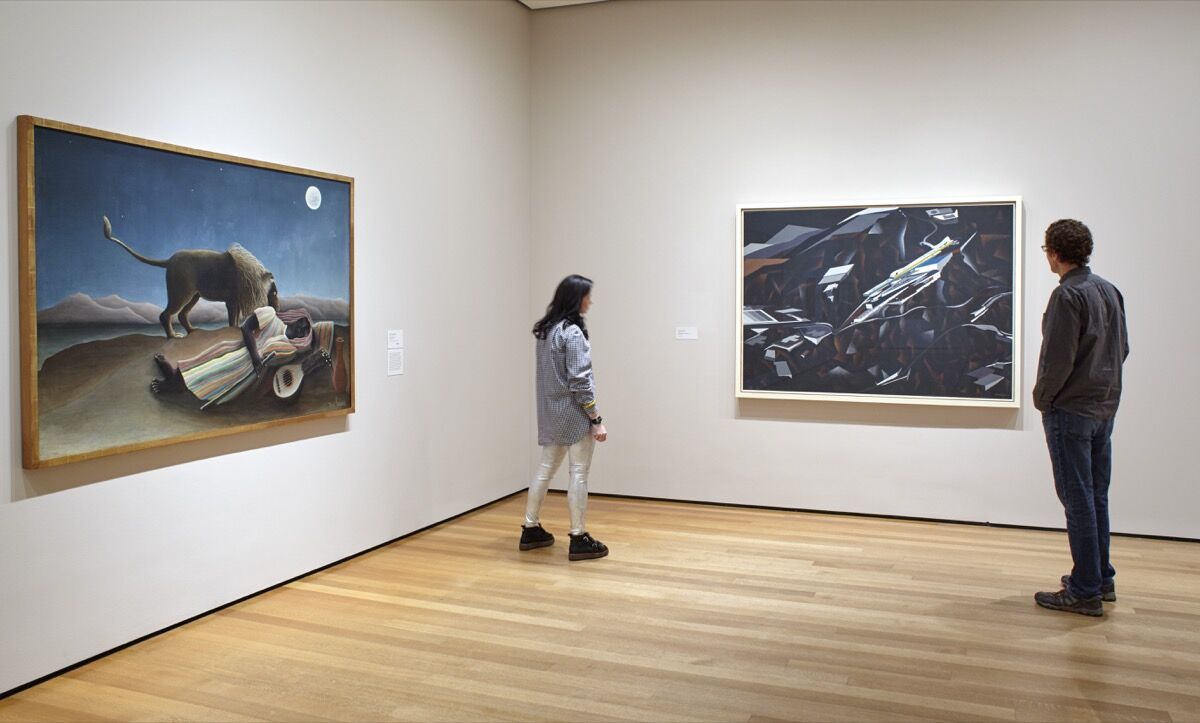 Work by Zaha Hadid, right. Installation view of the collection galleries at The Museum of Modern Art, New York. Photo by Robert Gerhardt, courtesy of MoMA.

On Thursday night, MoMA hung works by artists from three of the seven countries impacted by President Donald Trump’s travel ban, replacing artists like
Picasso
and
Picabia
with works by Iraqi-born
Zaha Hadid
and Sudanese painter
Ibrahim El-Salahi
, among others. The move has been roundly praised by critics and observers as a strong political statement from an institution that is often seen as taking a neutral position. The re-hang quickly garnered a positive and emotional response from art-world insiders, visitors, and at least one employee who could be found strolling through the galleries today.
The newly installed works are accompanied by wall texts explaining that their artists hail from the majority-Muslim nations affected by Trump’s executive order, which, though temporarily stayed by a federal judge, continues to be the subject of fierce protest. And though
van Gogh
’s Starry Night (1889), hanging opposite a Hadid drawing, remains a tourist favorite, some are paying visits to the museum especially to see the late architect’s work, and others that are freshly installed.
“That’s why we came here today, to support this show,” said Hiwot Woldu, standing in front of Hadid’s painting The Peak Project, Hong Kong, China (1991). An Ethiopian-born New Yorker, Woldu was happy to see MoMA step beyond its traditional remit. “It’s encouraging to see that museums and places that are normally relatively neutral are taking a chance and showing what they are supporting,” she said. The accompanying wall text is unambiguous, if nonpartisan, stating that the work stands to “affirm the ideals of welcome and freedom as vital to this Museum, as they are to the United States.” 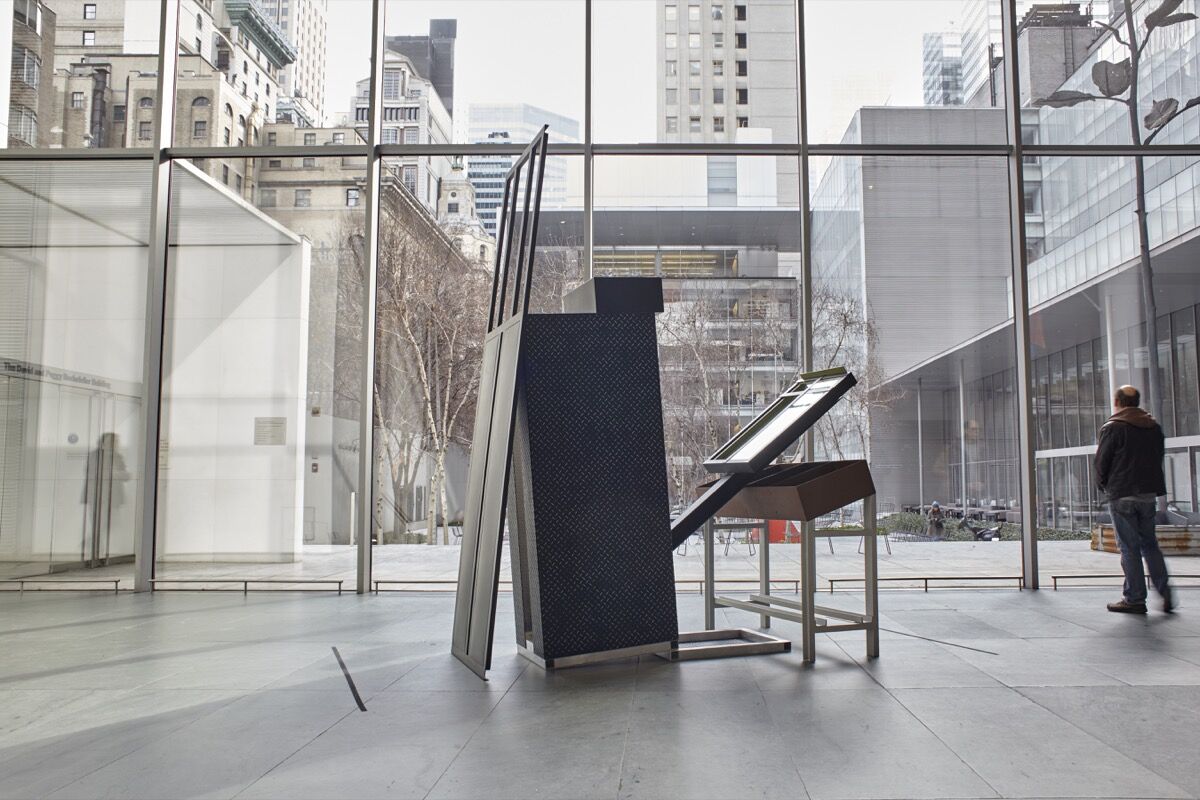 Work by Siah Armajani. Installation view of the collection galleries at The Museum of Modern Art, New York. Photo by Robert Gerhardt, courtesy of MoMA.

A MoMA employee, who asked not to be named, was looking over the newly installed pieces for the first time and expressed her approval of the institutional gesture. “I think it’s really powerful and important,” she said, noting that while putting a Hadid next to a
Rousseau
doesn’t make for a natural juxtaposition, “it’s disruptive in the right ways.” And she described a museum staff that is broadly “on board” with the very public statement of hanging the works, one that came together with remarkable speed just days after the travel restrictions were announced.
That quick response speaks to how museums that have preferred to stay out of the political fray will have to re-think their position as President Trump continues to subvert the norms of political dialogue and action. “Sometimes, particularly nowadays, even if you want it to stay out of art, political aspects will get involved and shape your opinions,” said Grace, a New Yorker who was surveying Iranian-born
Charles Hossein Zenderoudi
’s work, K+L+32+H+4. Mon père et moi (My Father and I) (1962).
Beyond clashing with the museum’s ideology, the ban has had concrete implications for the artists represented by the institution. “A number of artists in our collection suddenly couldn’t travel the way they used to and share their work and ideas,” Christophe Cherix, MoMA’s chief curator of drawings and prints, told Quartz. 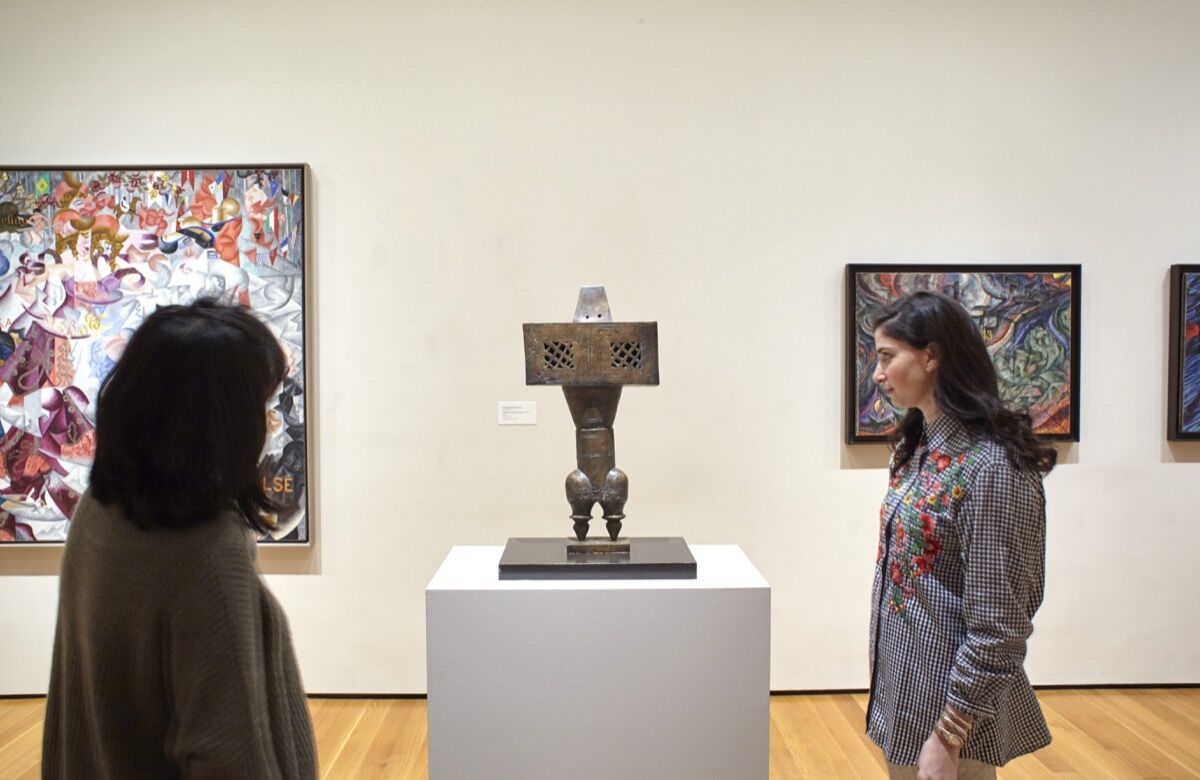 Work by Parviz Tanavoli, center. Installation view of the collection galleries at The Museum of Modern Art, New York. Photo by Robert Gerhardt, courtesy of MoMA.

Advertisement
Cherix, who oversaw the re-hang along with Ann Temkin, chief curator of painting and sculpture, selected works from the collection by Hadid, El-Salahi, and Zenderoudi, as well as by Iranian-born artists
Shirana Shahbazi
,
Parviz Tanavoli
, and
Siah Armajani
. Rather than bunching them together in a single room, they placed the pieces throughout the galleries of the fifth floor. Artists from Libya, Syria, Yemen, and Somalia, though impacted by the ban, are not represented in the re-hang due to logistical restraints and questions of what would fit within the art-historical narrative. The museum has noted that it will attempt to screen films by artists from these countries in the near future.
For Oscar Rommens, visiting from Belgium, MoMA managed to strike a good balance between statement and subtlety. “I like the feeling that the MoMA is trying to create, giving the artworks a special place and a special note,” he said. “It makes people realize even more that Muslims shouldn’t be ignored or isolated.” Gazing at Tanavoli’s sculpture, he added that it still felt at home among the artists from the traditional Western canon. “It’s special because it has a different style but it still fits into the scene of the room.”
Given all the press attention the works have been receiving, one might expect them to be glaringly signposted. But “if you come through here, unless you’re familiar with the hall, you wouldn’t know that this is the work,” said a woman named Nannette, who lives in New York, standing in front of
Tala Madani
’s video installation Chit Chat (2007). “I think it’s wonderful,” she said of the re-hang, which she hopes will have a real impact. “As more and more people react to his insanity and make him uncomfortable, maybe he will re-think what he’s doing, listen to people who are knowledgeable about the constitution, and act in a more rational manner.” 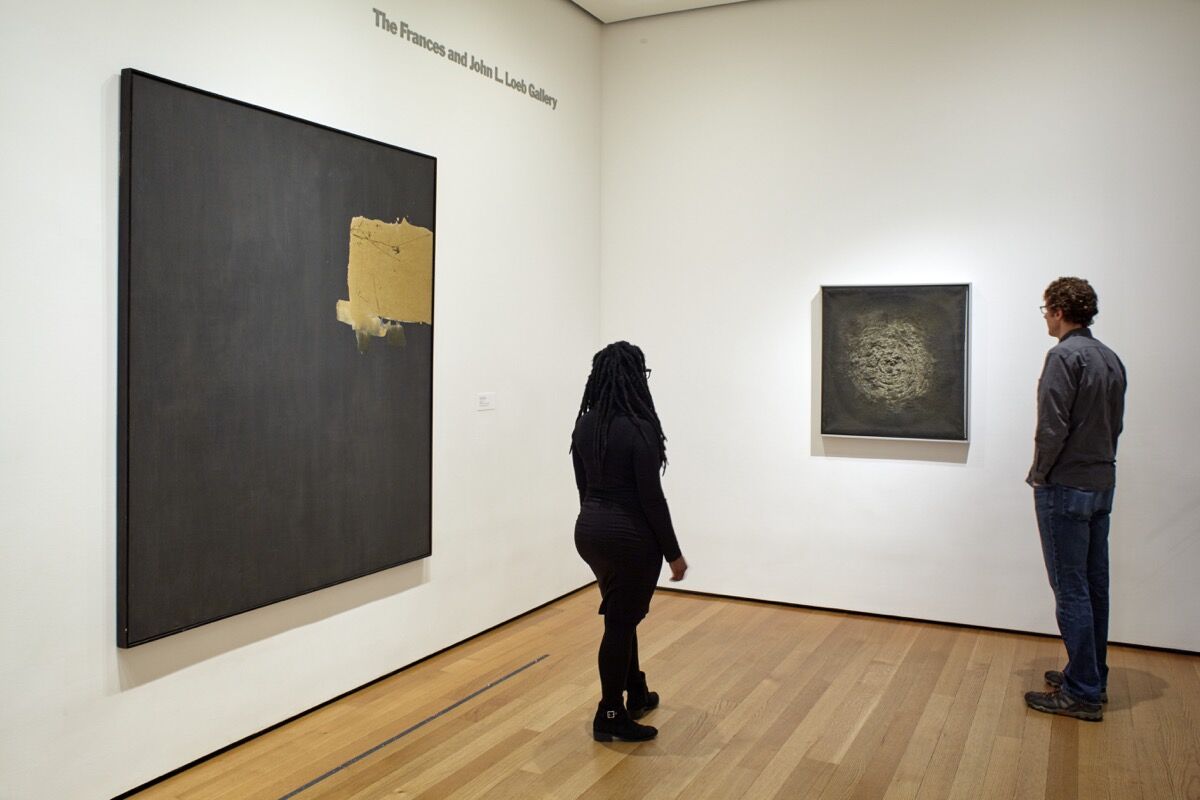 Work by Marcos Grigorian, right. Installation view of the collection galleries at The Museum of Modern Art, New York. Photo by Robert Gerhardt, courtesy of MoMA.

But beyond any tangible effects, the presence of the works in MoMA’s galleries makes a powerful gesture of solidarity. Visiting from Uruguay, Silvia Ibarra knew about the new installation before arriving at the museum, thanks to the enormous social media response it’s had. But seeing them in the flesh was an emotional experience nonetheless. “I’m proud to see this in an art gallery. It moves me,” she said simply. “This is why I love New York.”
The addition of more works is expected in the weeks ahead.
Isaac Kaplan is an Associate Editor at Artsy.
Related Stories