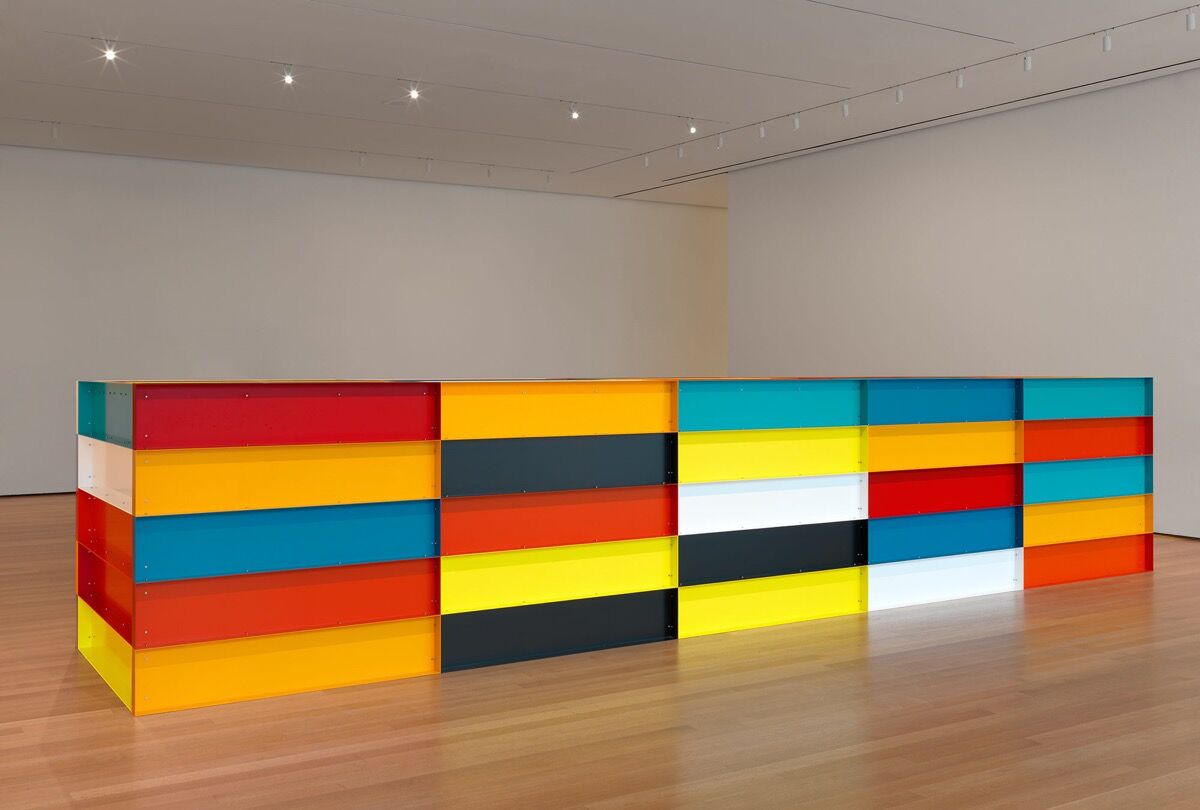 Deep contrarianism defines the late
Donald Judd
’s life and work. The mid-century artist refused to call his spare, three-dimensional constructions “sculpture” or “minimalism.” He prefered to categorize them with a term he made up: “specific objects.” These artworks often resemble hollow shelves and boxes that refuse to be filled; playgrounds you can’t climb; metal structures mounted on walls at portrait height that aren’t portraits; benches on which you can’t sit; and ramps that lead nowhere. While there’s admirable integrity in Judd’s detailed specifications regarding color, material, process, and exhibition methods, there’s also a supreme fussiness and self-importance that touches everything the man ever made. The work wants to argue with whatever qualms you might have about it, and you get the feeling that the work would probably win.
On March 1st, the Museum of Modern Art opens the first Judd museum retrospective in over 30 years. Walking through the press preview with MoMA chief curator of painting and sculpture Ann Temkin, I wanted to roll my eyes at times as I thought, “All right dude, whatever you say.” Yet Judd’s contrarian works also bring out contradictions in me: The longer I look, the more I love his work. Judd’s art demands significant space from an institution and time from a viewer. Spend enough time with the works, and the heart softens towards these hard-edged forms. 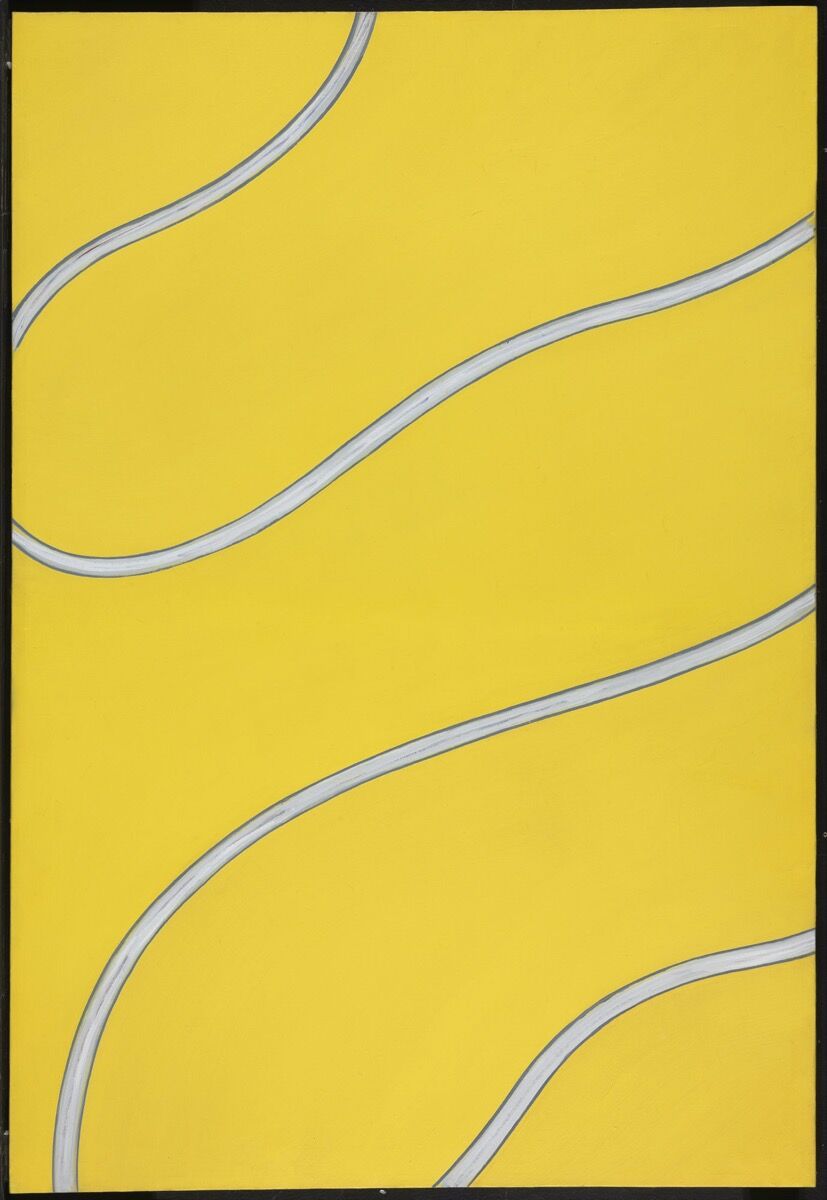 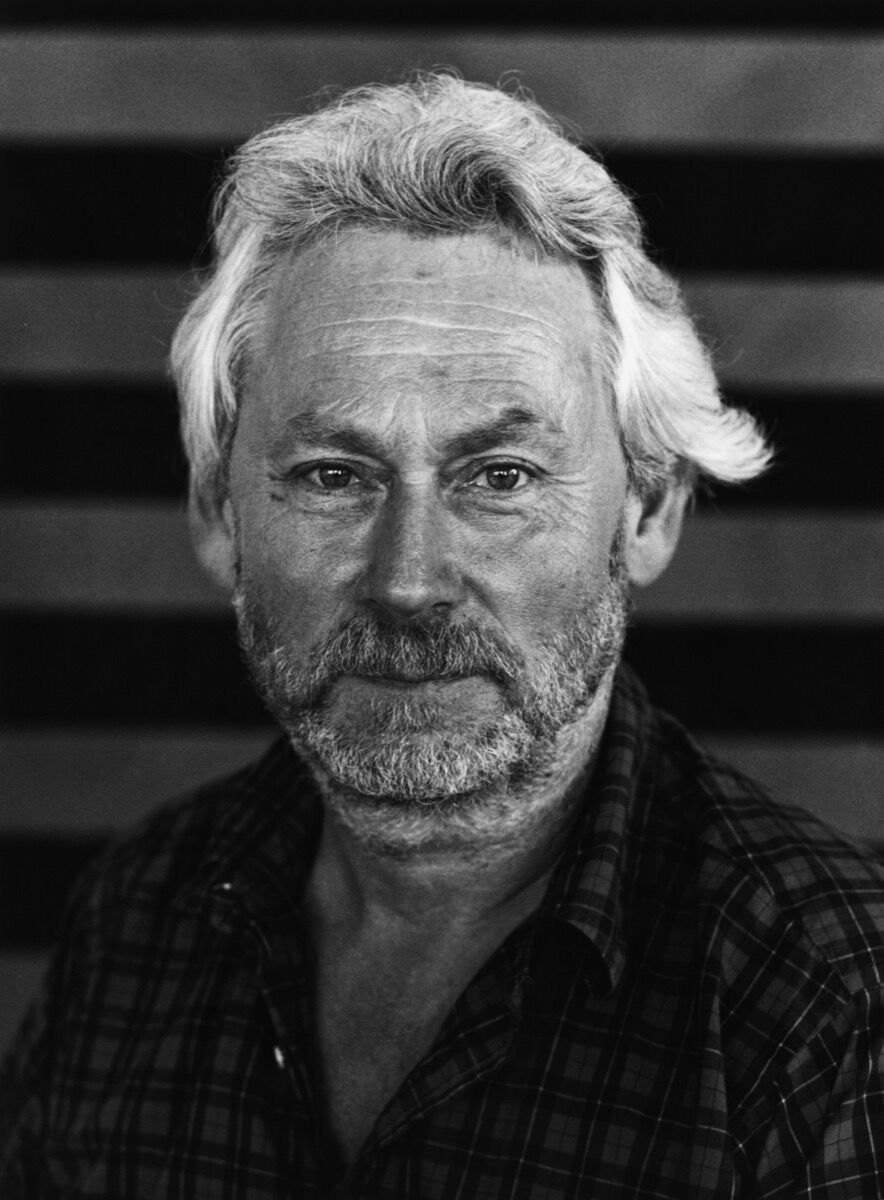 The show proceeds chronologically, beginning with Judd’s early forays into painting. Before he started making objects in 1962, he worked as an art critic and made abstract canvases. Against vivid, monochromatic backgrounds, Judd painted thick, light, looping lines. He began to add depth to his paintings, building up the surfaces and sticking objects such as a tin baking pan and a yellow plexiglass “O” into the center.
These early works are mostly competent, though I’m still wondering—why a baking pan? They lack the strong, individual voice that Judd eventually established. It would be difficult to identify these paintings as “Judds” if the museum label didn’t tip you off. Moving from these works to Judd’s signature stacks and boxes makes the artist’s achievement of a specific, instantly recognizable aesthetic seem that much more impressive and hard-won.

Advertisement
Another early work, Untitled (1963), similarly highlights Judd’s eventual success by contrast. The piece features a cadmium-red, L-shaped wood bar on which a purple lacquer aluminum bar rests. Knowing Judd’s later work, the piece just looks “off”: Surface imperfections and the smaller scale make the work look like a woodshop project that didn’t quite pan out.
Whether or not he recognized his limitations as a painter, Judd made a canny move: He deprioritized traditional artistic skill, gesture, and any evidence of his own hand. It’s a good lesson to young artists, or anyone at the nascent stage of a career: If you’re not good at something, move on and develop something new that highlights your strengths. 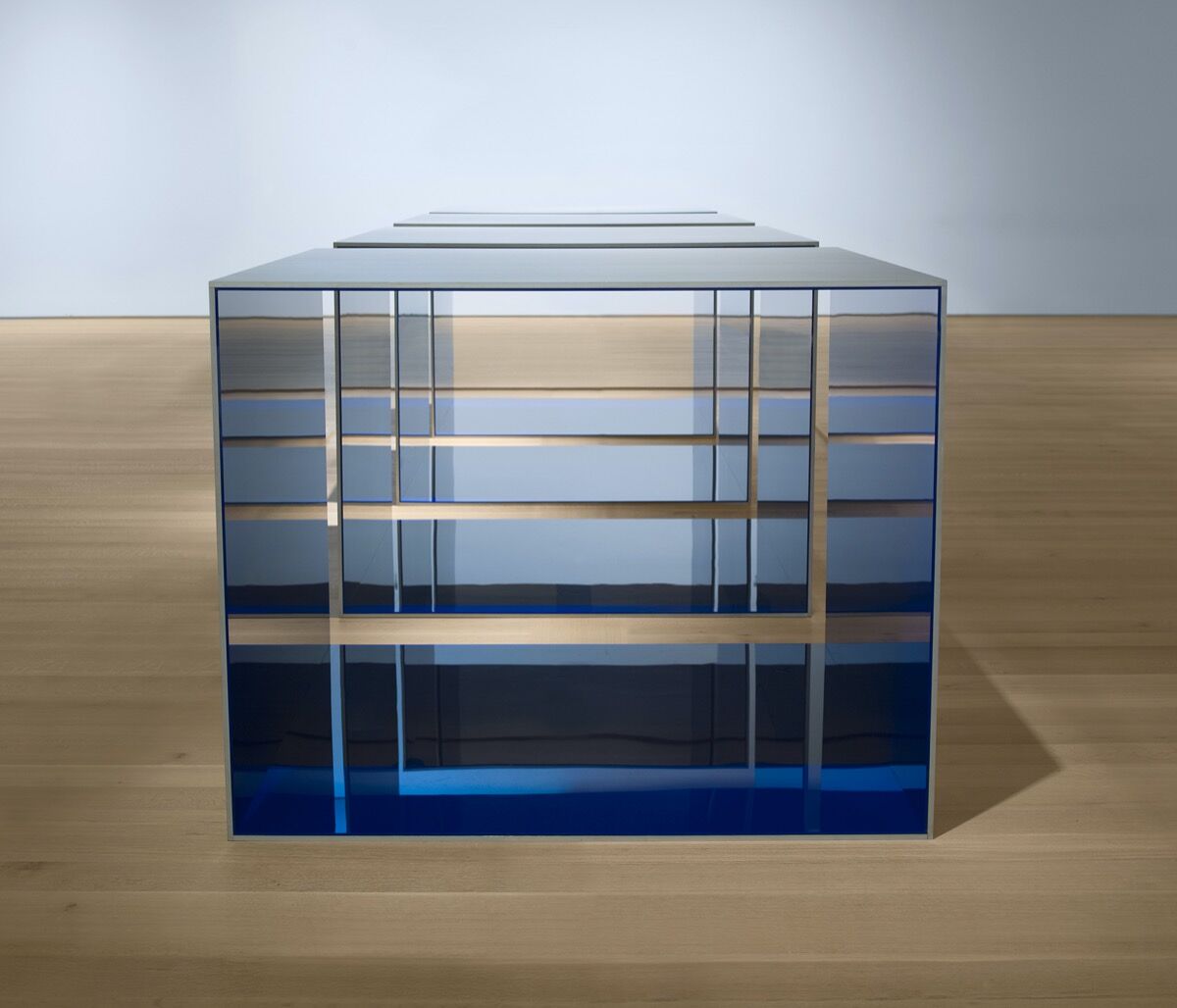 Judd’s true abilities, the MoMA exhibition suggests, lie in planning, subtle experimentation, and concept design. Judd studied philosophy, and what his work lacks in immediate expressiveness finds a counterpoint in its conceptual rigor. After the early 1960s, Judd made mock-ups and hired fabricators, such as the Bernstein Brothers in New York and Lehni AG in Switzerland, to realize his ideas.
A full appreciation of the subsequent galleries, filled with Judd’s mature work, requires patience and a thoughtful disposition. You have to enjoy watching the way light and shadow bounce off the six giant, off-kilter plywood boxes in Judd’s Untitled (1973), and appreciate the variation in wood grain that resembles an animal hide as much as it does a tree trunk. You have to find the musicality in the conjoined colored boxes that Judd started fabricating in 1984 and continued working on until 1992, two years before he died. You have to find funeareal poignancy in the black stack that Judd made towards the end of his life, the last work Temkin included in the show before the exit. You have to peer into the hollows Judd created in and around constructions of copper, plexiglass, and galvanized iron, and think about how this emptiness—as well as the works’ varying colors and materials—make you feel.

In telling Judd’s story, MoMA neglects a crucial component of the artist’s life: his architectural and interior design coups in SoHo and Marfa. So much of Judd’s legacy, and the story of what he stood for as an artist, is bound up in the spaces where he lived, worked, and invited fellow artists to show their work in 1960s SoHo and a sleepy Texas town—feats of spare, minimalist design. While MoMA’s wall texts share information about these sites, a lack of photographs or recreations leave these spaces mostly out of the picture. I understand that the museum wanted to focus on the work, but in 2020, the name “Judd” conjures so much more than what can be shown in the white cube galleries of a museum.
The most impressive aspect of Judd’s career, ultimately, is his creation of a sweeping ethos that carries over from one project to the next. Judd’s works, on their own, are about spare forms and recombinations, clearing out space for viewers to project their own thoughts. But more than that, Judd embraced an unyielding adherence to a unique creative vision. This required him to establish environments for himself that were most conducive to making. Inspired by the simplicity of Shaker furniture, a detestation for the extraneous or flamboyant, and a reverence for open space, Judd’s spaces in SoHo and Marfa attempt to get as close as possible to freedom, beauty, and mindful living. 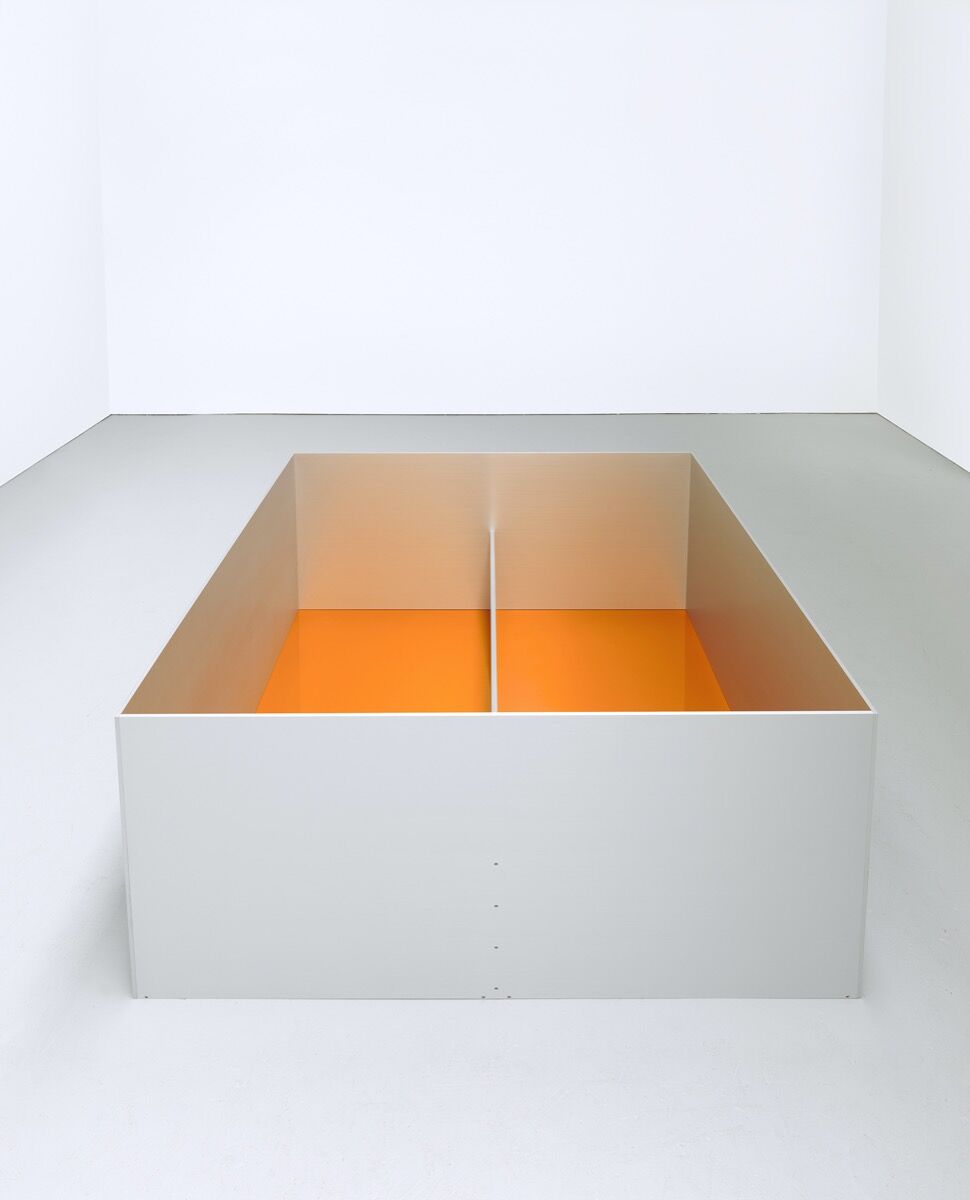 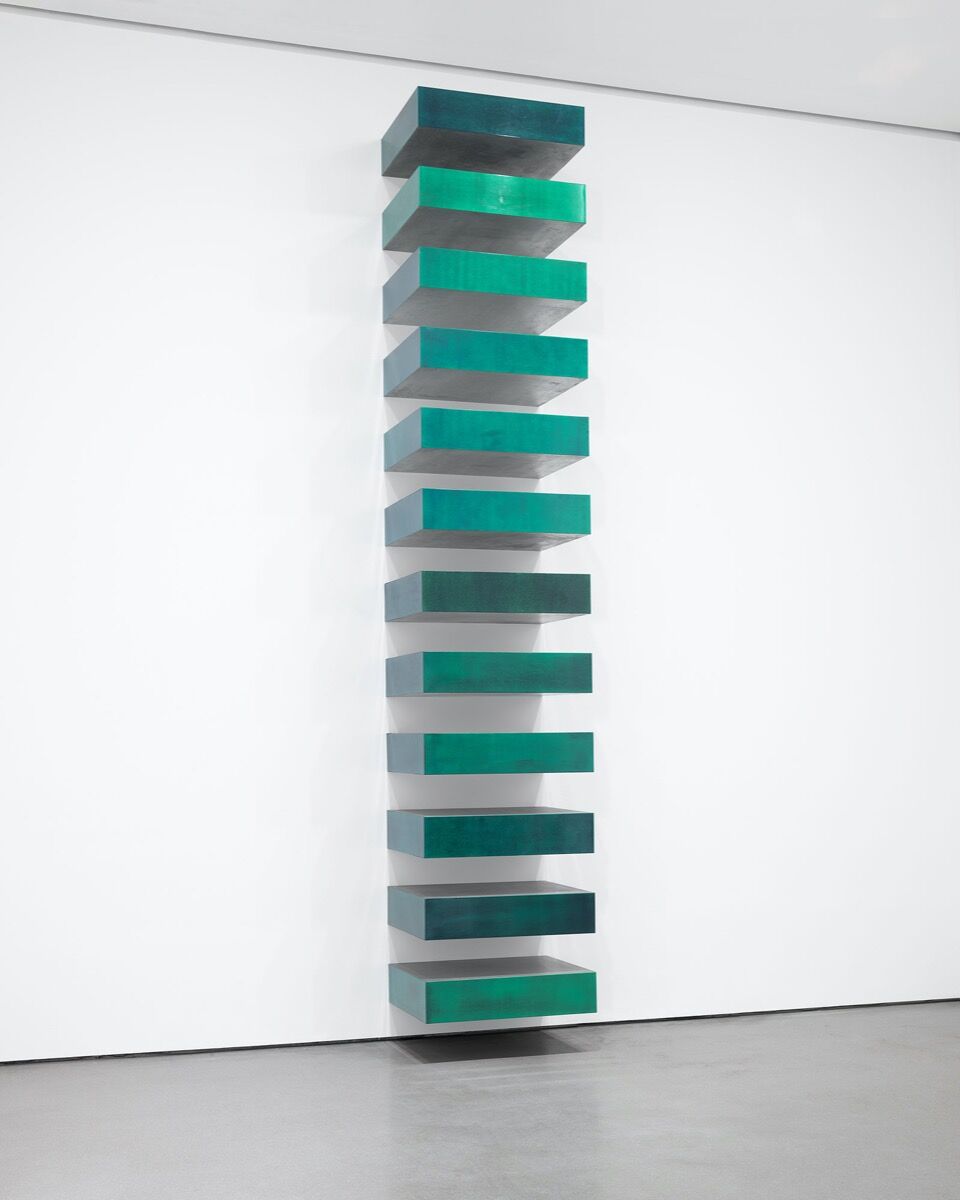 MoMA gives viewers the next best thing. Walk around the galleries long enough, and that Juddian spirit begins to wash over you: You too, it suggests, could build an authentic life where everything you touched, and every decision you made—from selecting a subtle paint gradation to mounting a box at a certain height—matters. In a busy world that can privilege knee-jerk reactions, studied cleverness, glib dismissal, and loud voices, this Judd show can feel like a cleanse.
Alina Cohen
Related Stories

How I Learned to Love Donald Judd’s Multicolored Works 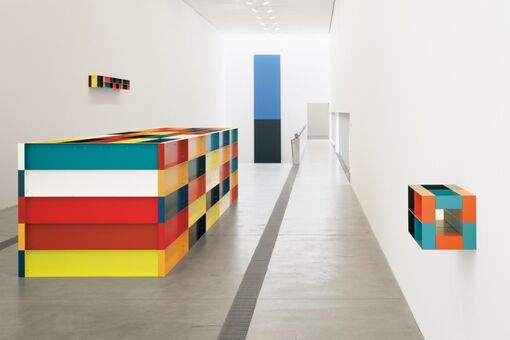