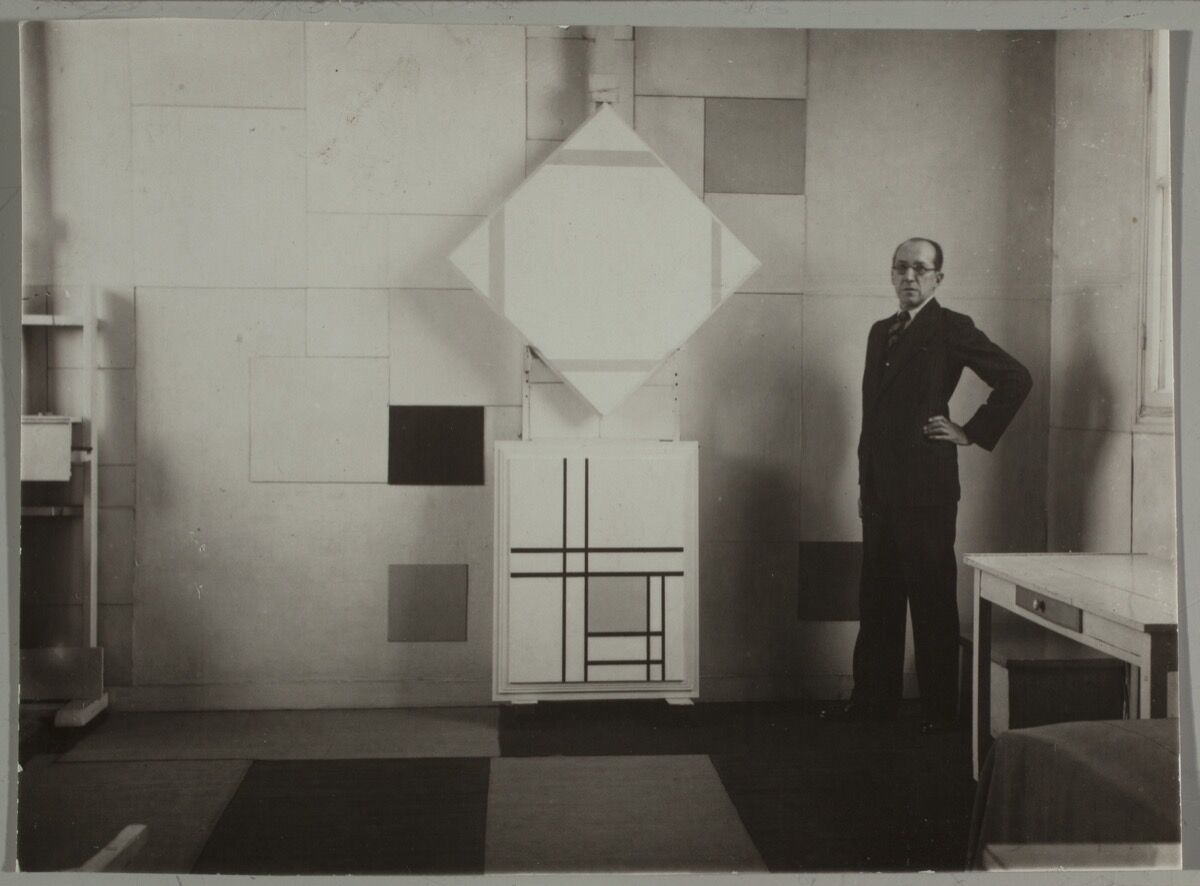 Piet Mondrian
was almost 70 when he had his first solo show, but his bold, geometric paintings have since become iconic. Lesser-known (but no less fascinating), however, are the spaces where the
De Stijl
artist produced his work.
Mondrian wrote at length about the dissolution of art in life, envisioning a future world in which art would no longer be distinguishable from lived experiences. This credo is embodied in the studios that he occupied over the course of his career—in Amsterdam, Paris, and New York. The apartments where the Dutch-born artist slept, ate, and entertained also functioned as his work sites. In turn, the themes of his art spilled into his daily existence.
In Amsterdam, Mondrian was based in a building occupied by artists at Sarphatipark 42, from 1908 to 1911. During this period, he was creating his often-overlooked figurative works, which characterized the early part of his career. In concert with the conventional subject matter, sensuous colors, and gently curving lines of his landscape paintings, Mondrian’s Sarphatipark space was traditional and classic: Rugs, heavy curtains, chandeliers, and mismatched wooden furniture populated the apartment.
In the living quarters, framed artworks—predominantly featuring the natural world—climbed the walls, salon-style; meanwhile, in the adjoining studio space, empty frames (presumably awaiting the artist’s own work) rested on the floor. 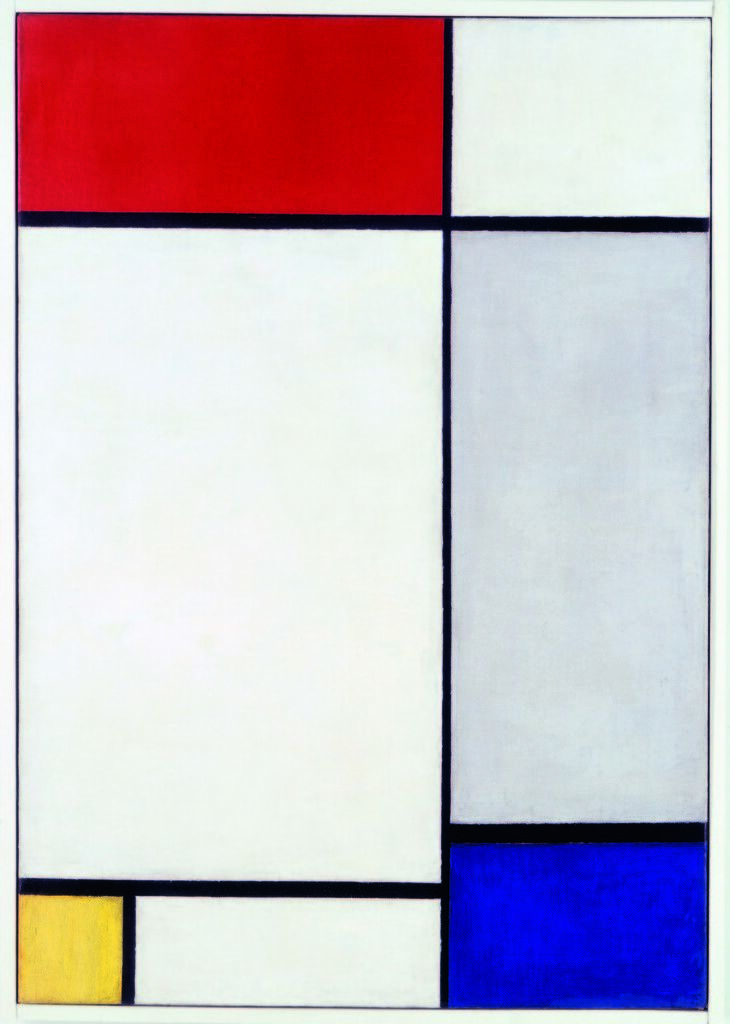 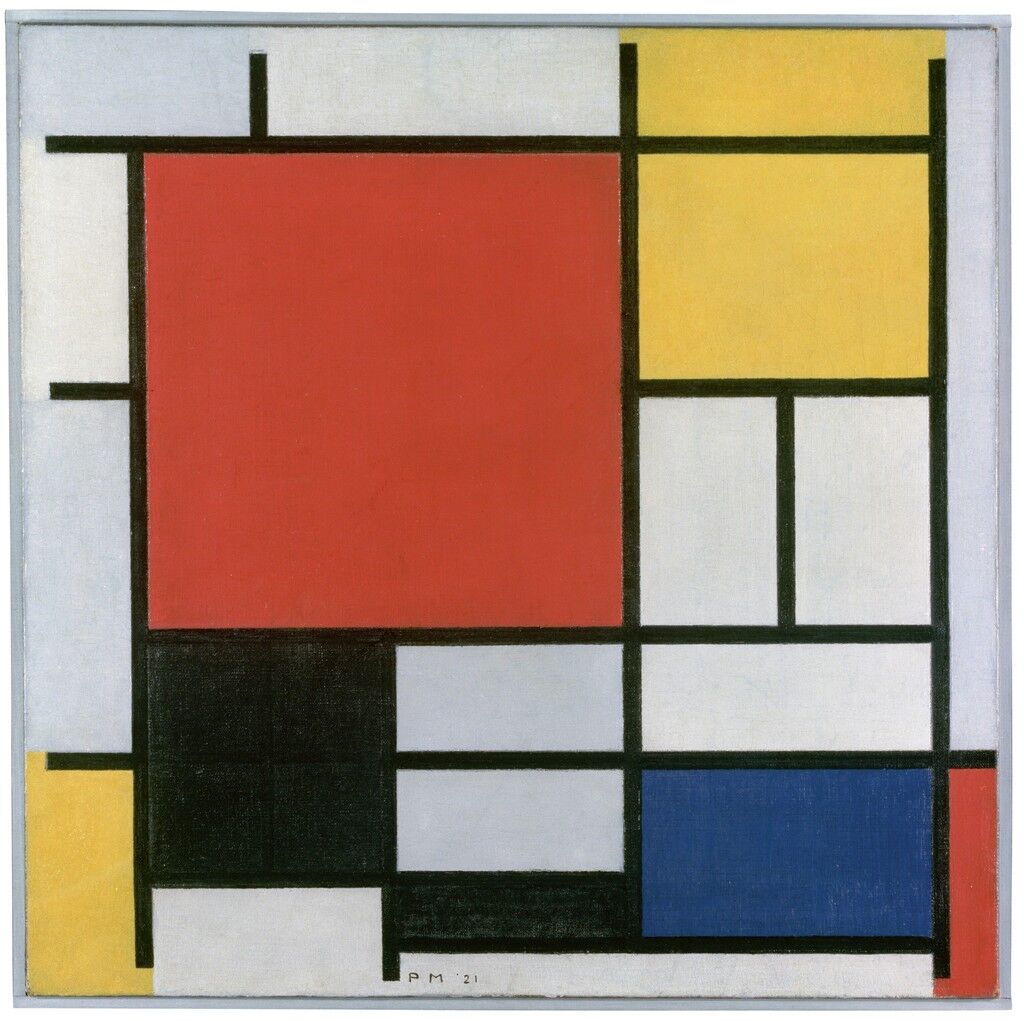 Piet Mondrian
Composition with Large Red Plane, Yellow, Black, Grey and Blue, 1921
Mondrian and Colour, Turner Contemporary, May 24 – September 21, 2014.
Mondrian later moved to Paris to participate in the city’s vibrant art scene, but he spent five years in Holland after the outbreak of World War I, when the war prevented his return to Paris from a visit there. When he arrived back in the French capital in 1919, it was with a new artistic philosophy that he had developed during his time away:
Neo-Plasticism
, which, through purity of composition, strove to create balance and harmony in art as well as in life.
With Mondrian’s accompanying conviction that artworks should be restricted to primary colors, white, and black—and clean vertical and horizontal lines—Mondrian accordingly transformed his space in the city’s Montparnasse district, which he inhabited for some 15 years.
Mondrian fashioned this studio at 26 rue du Départ (which the Tate Liverpool recreated in 2014) into a whitewashed environment with elements of blue, red, yellow, black, and grey. He arranged colored and blank cardboard rectangles on the walls, and his furniture and accessories adhered to the same palette. The studio mirrored the stark compositions of his late work, as well as referencing his earlier abstractions, which featured a wider range of colors and busier compositions.
In 1927, as he continued to develop his painting style, Mondrian also laid out an interior design philosophy, calling for homes to be a series of “colored and colorless planes, combined with furniture and equipment, which must be nothing in themselves but constituent elements of a whole.” He even suggested turning any representational paintings to face the wall, such that they would become plain rectangles in step with the lines of an architectural space. 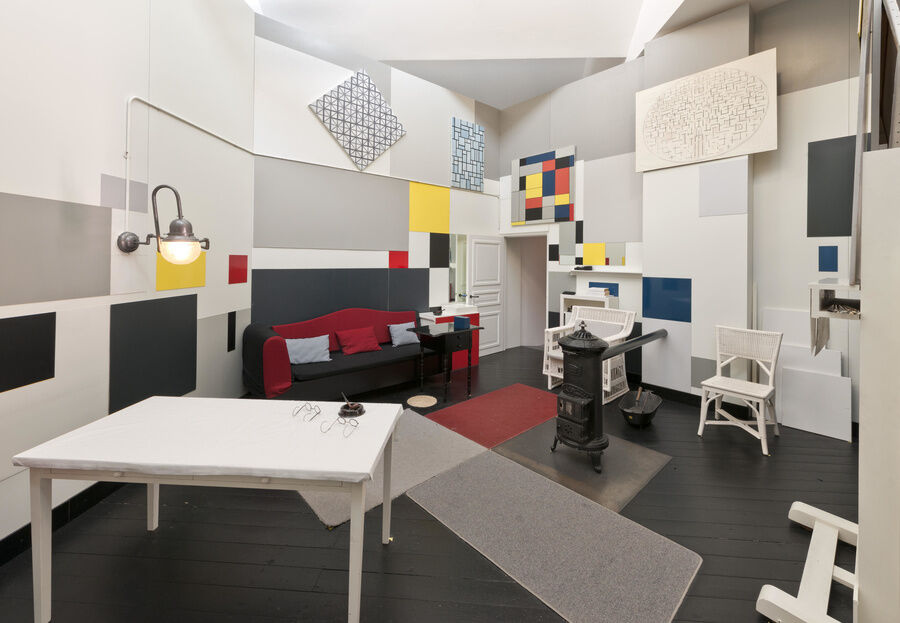 Reconstruction of Mondrian’s studio at 26 Rue du Départ, Paris, which was on display in “Mondrian and his Studios” at Tate Liverpool from 6 June - 5 October 2014. © Tate Photography, David Lambert & Rod Tidnam. Courtesy of Tate.

Advertisement
Mondrian immigrated to New York in 1940, on the heels of a two-year sojourn in London. He had moved to Britain in 1938 to flee the threat of German invasion in Paris, only to leave London for the States when World War II moved northward.
Mondrian’s New York flat on East 59th Street in Manhattan was a white box peppered with small squares in his signature primary palette, with the studio’s desks, bookcases, and chairs forming the vertical and horizontal lines that he championed. The space paralleled the mature phase of his practice, which was marked by even more pared-down compositions.
While Mondrian’s studios seem to translate his paintings into three dimensions, the artist considered interior space to be distinct from painting. He believed that Neo-Plastic painting represented a closed or complete world unto itself, but an interior could never be viewed in its entirety or conceived of as a unified whole in quite the same way.
It’s not difficult to understand, however, why the peace and order of Neo-Plasticism would have appealed to Mondrian as a design aesthetic. For the Dutch artist, these studios must have served as refuge at a time when he was repeatedly uprooted due to events that lay beyond his control.
Rachel Lebowitz
Related Stories