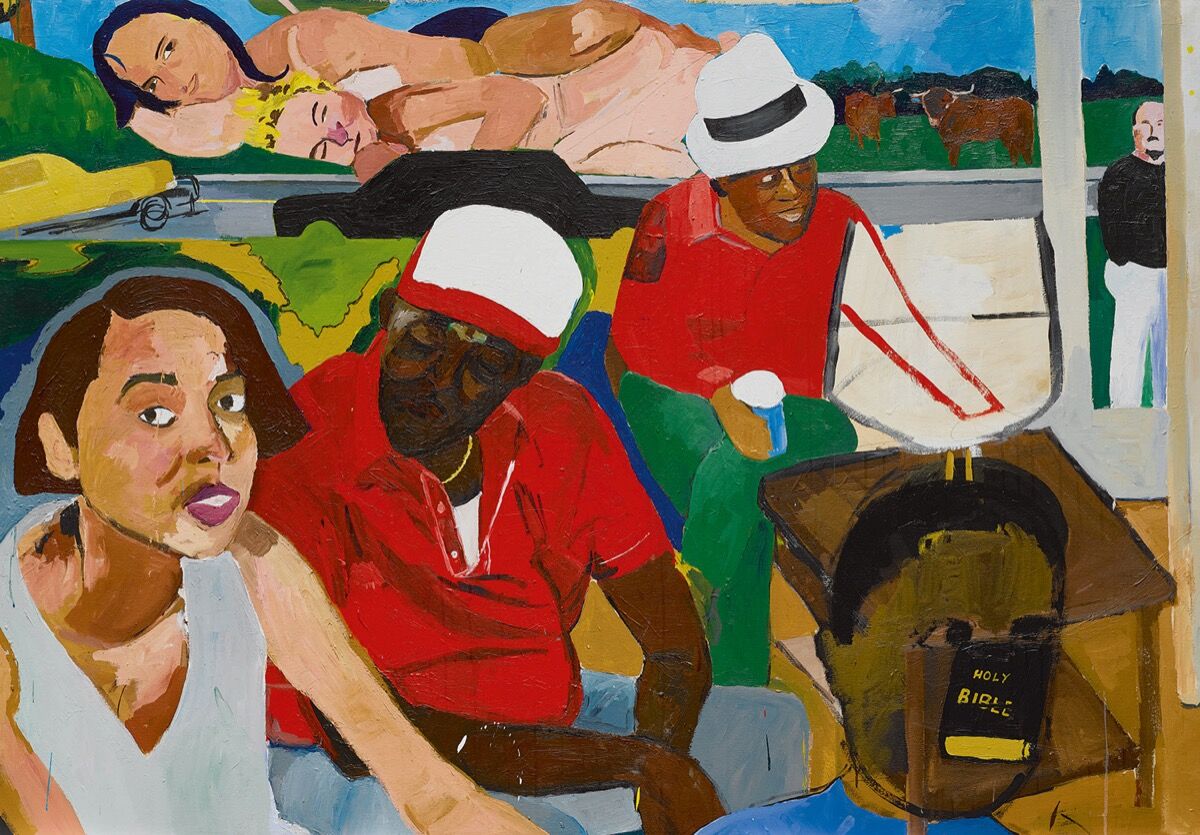 Sotheby’s kicked off three days of bellwether post-war and contemporary art sales in New York on Wednesday night with a $314 million evening sale—well over the night’s low estimate of $245 million and approaching the high estimate of $328 million. The 54-lot set was preceded by 11 works from the David Teiger collection, which brought in $48.5 million. All together, the evening grossed $362.5 million, a $50 million–plus improvement over the equivalent sale last November.
As was the case in the Impressionist and modern art sales earlier this week, works estimated above the $10 million mark saw relatively thin demand. Just one or two collectors vied for most of the lots, and the top three all went for below their estimates. But bidding for lower-priced works often worked the room into a frenzy.
Dana Shutz
’s Her Arms (2003) saw bidding from Sotheby’s specialists Caspar Jopling, Bernard Lagrange, and Yuki Terase on the rostrum, as well as Jeffrey Deitch from his seat in the saleroom. The work sold to Alex Branczik, who is the senior director and head of contemporary art in Europe at Sotheby’s, for a $650,000 hammer. That figure was more than triple the work’s high estimate.
Henry Taylor
’s I’ll Put a Spell on You (2004) went for $800,000 at the hammer—an extraordinary four times the work’s pre-sale high estimate of $200,000.
The well-constructed sale saw just two works bought in out of 65, for a stellar sell-through rate of 96 percent.
Sales from the Teiger collection will support the foundation established after the management consultant’s death in 2014. The first batch of works from his collection were sold in London during Sotheby’s contemporary art evening sale held during Frieze in October, which grossed $46.8 million. When including the day sales in London and work in the prints and multiple sales, the Teiger collection has thus far grossed $100.5 million on a $100 million estimate; more works from the collection will be sold in the day sales on Thursday. 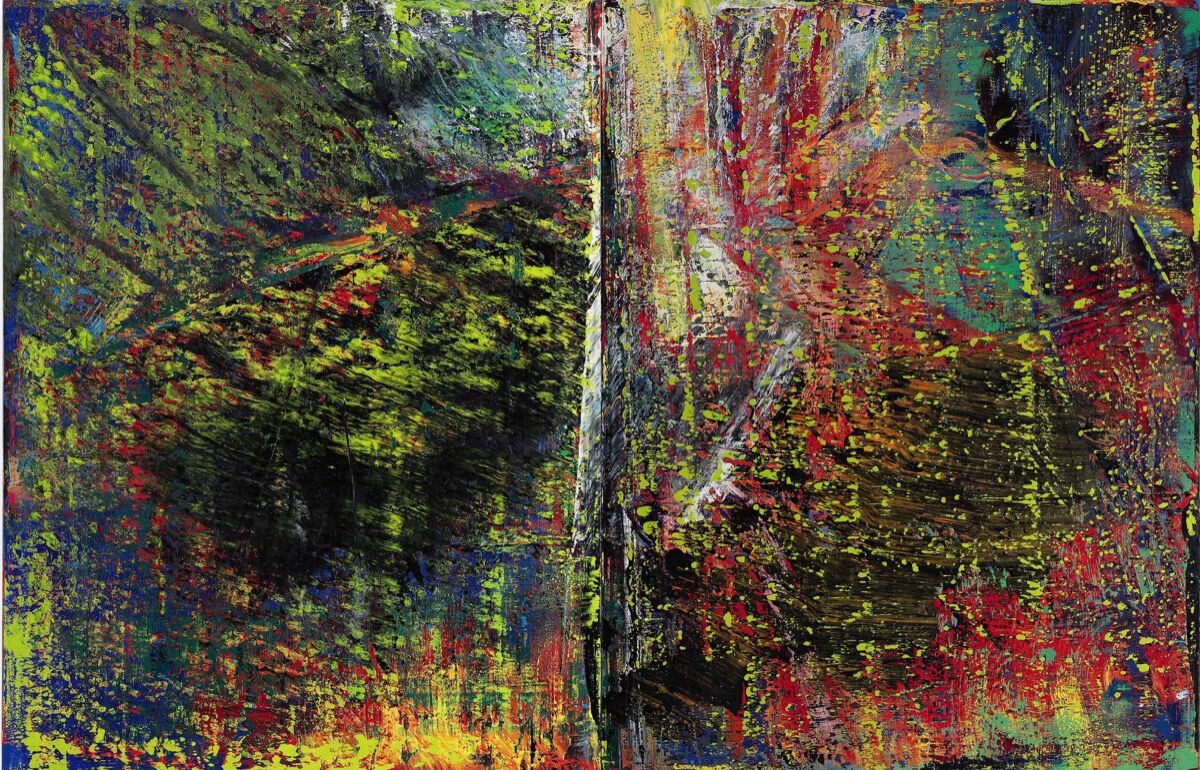 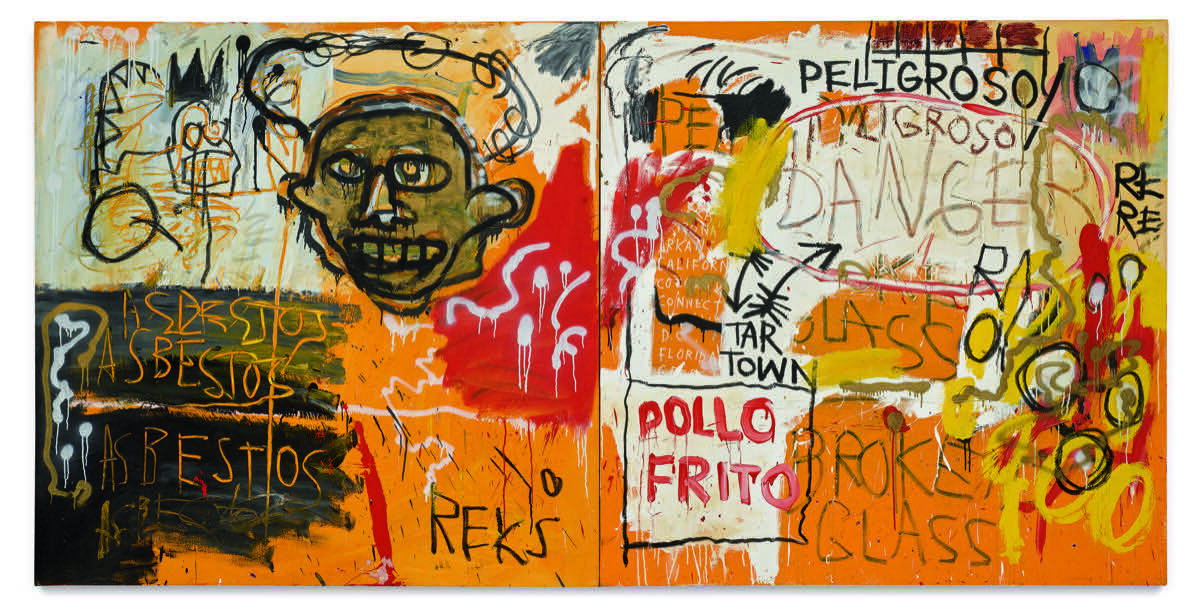 Advertisement
Of the four auction records notched Wednesday, three were for black artists: Taylor, Jacob Lawrence, and
Jack Whitten
. Taylor’s brightly colored landscape from 2004 was slotted second in the contemporary sale. Bidding exploded immediately, with more than a half-dozen collectors vying for the work on the phones and in the room before it hammered. With fees, the price was $975,000, a new mark for Taylor, continuing a remarkable rise for the artist. Before May 2016, his auction record was just shy of $40,000.
Lawrence’s painting The Businessmen (1947) saw fervent bidding from Sotheby’s chairman Amy Cappellazzo on the phone, as well as advisor Todd Levin on his cellphone while sitting in the saleroom. It was eventually captured by Sotheby’s executive vice president and global head of business development, Valentino D. Carlotti, for a hammer price of $5.2 million, more than double the high estimate of $2 million; with fees, it came to $6.1 million. The Whitten sold for $1.8 million at the hammer ($2.2 million with fees), which was above its $1.2 million high estimate. Nina Del Rio, a senior vice president at Sotheby’s, was the successful bidder, beating out Cappellazzo and Andrew Fabricant, the Gagosian director who was seated on the aisle and bidding earbud-in on behalf of clients. 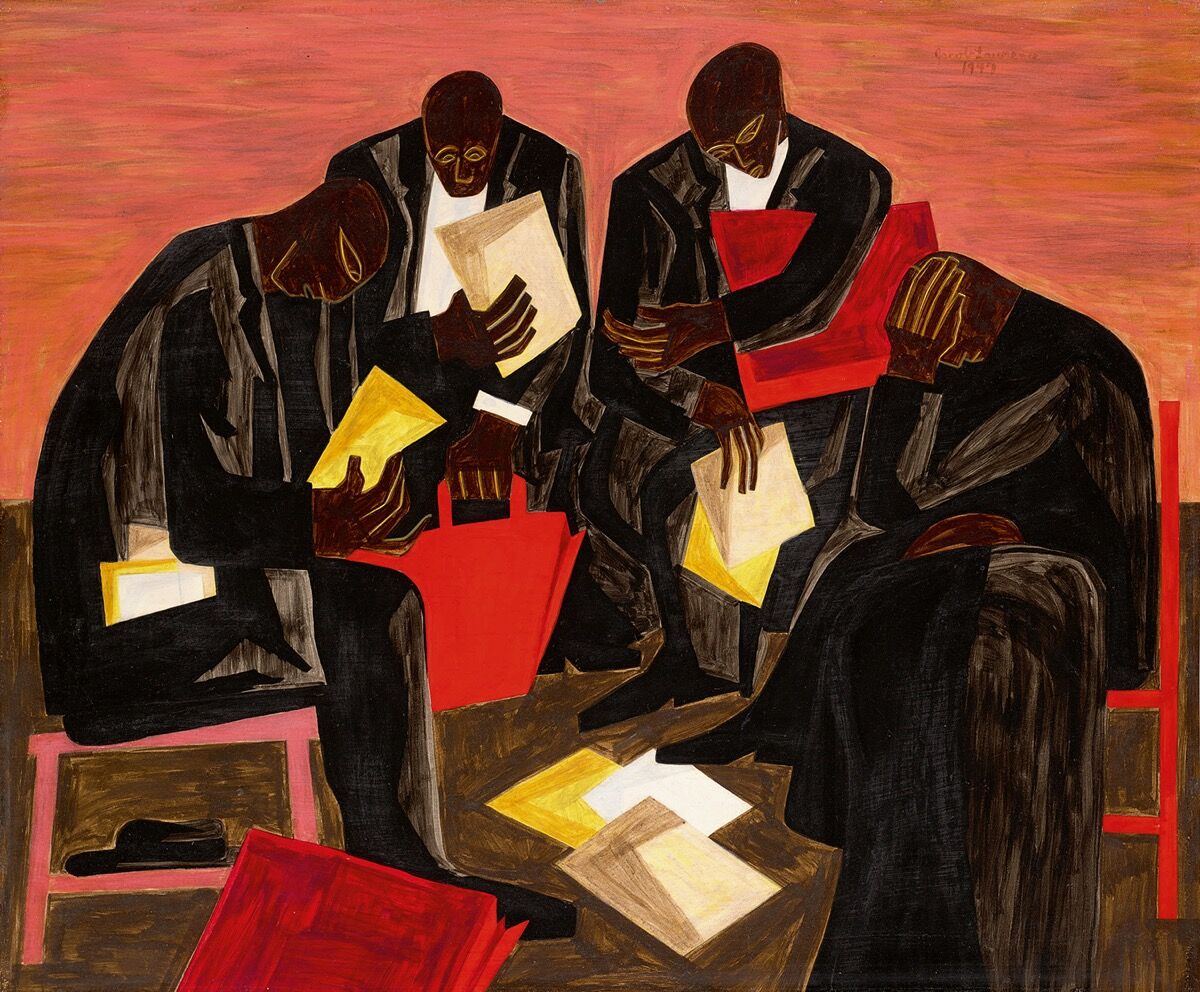 In an interview after the press conference, Cappellazzo said that African-American artists deserve to get their due in the marketplace. To achieve that, she said the Sotheby’s team has put an emphasis on consigning the best possible examples of their work to the evening sales (the house’s May sale broke records for
Kerry James Marshall
,
Barkley L. Hendricks
, and
Njideka Akunyili Crosby
).
“There hasn’t been a Jacob Lawrence like that come to auction in over 10 years,” Cappellazzo said. In addition to underbidding the Whitten and the Lawrence, she secured the late Hendricks’s North Philly Niggah (William Corbett) (1975) for a client on the phone for a mid-estimate $1.6 million hammer ($1.9 million with fees).
“We care, and we’re nurturing this market,” she said. 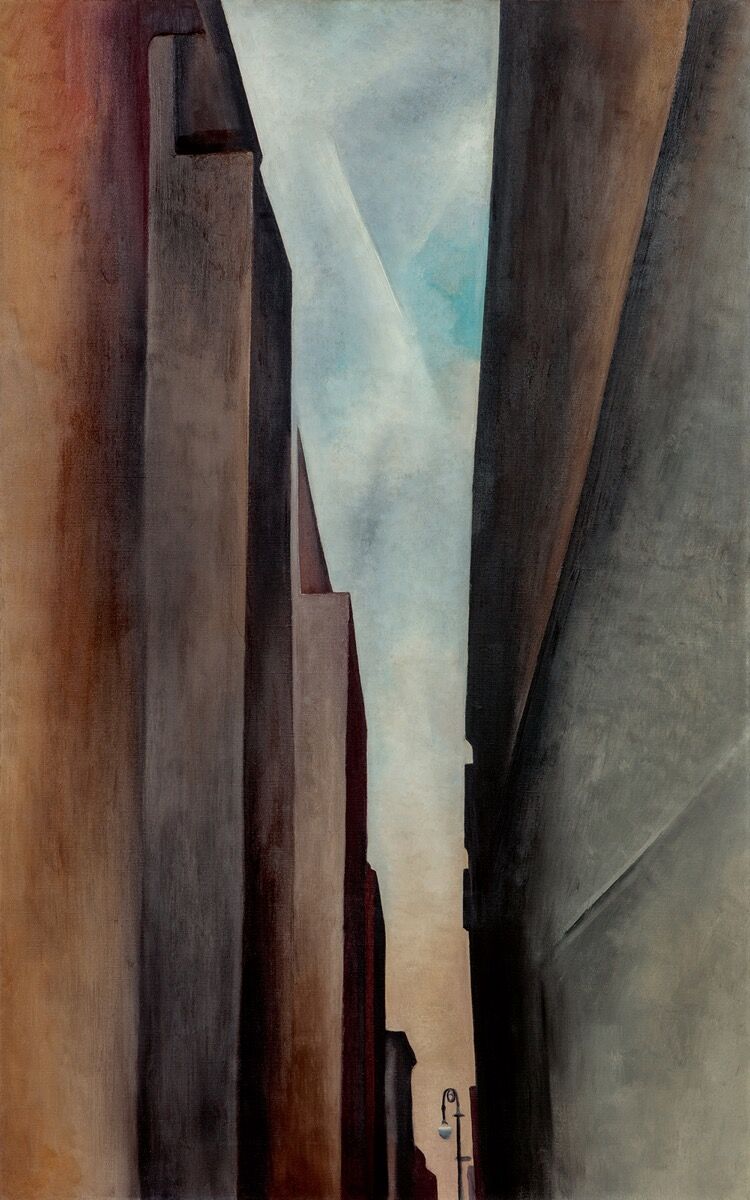 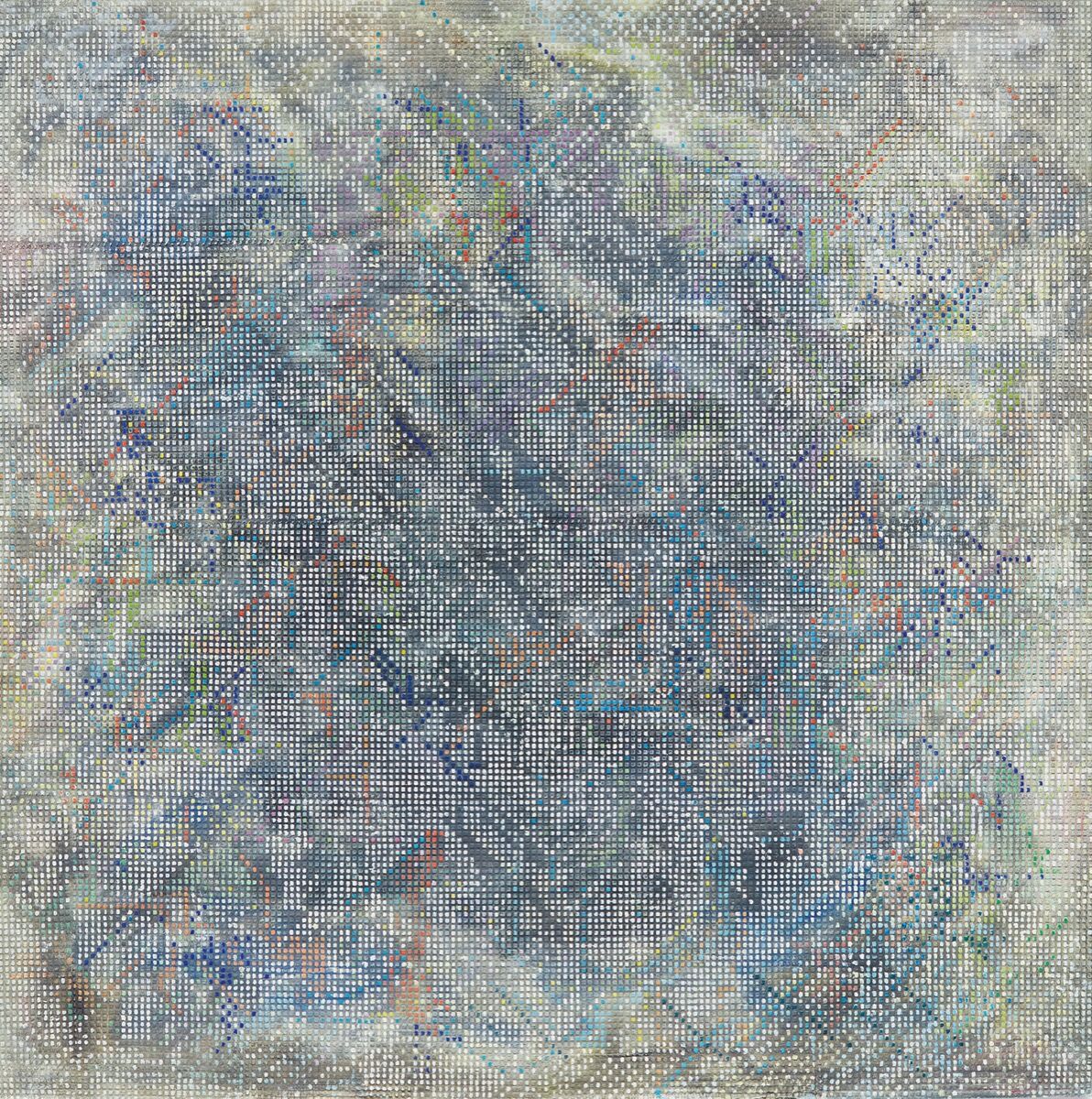 Unlike the Impressionist and modern sales on Sunday and Monday nights, where the expected top lots at both Christie’s and Sotheby’s failed to sell, there were no flops at Sotheby’s on Wednesday. Finishing the evening just two lots away from a white glove sale is remarkable, and demonstrates strength in the contemporary market despite increased economic volatility.
Grégoire Billault, post-war and contemporary department head at Sotheby’s, said the house is focused on ensuring that it takes advantage of a strong market while it can, without getting distracted by a sense of competition.
“There’s a lot of speculation about the market—the stock market and the economy in general—but clearly, you can see that the market is responding well,” Billault said at the press conference.
“We never try to be the biggest, we try to be the smartest, and the plan was well-executed tonight,” he added, in a nod to Christie’s.
The $327.1 million low estimate for the rival house’s post-war and contemporary sale on Thursday is just shy of Sotheby’s projected high for Wednesday. Tomorrow’s star lot alone,
David Hockney
’s Portrait of an Artist (Pool with Two Figures) (1972), would bring in a third of the Sotheby’s total sale if it goes for the $80 million estimated—and would make Hockney the most expensive living artist.
Nate Freeman
Related Stories