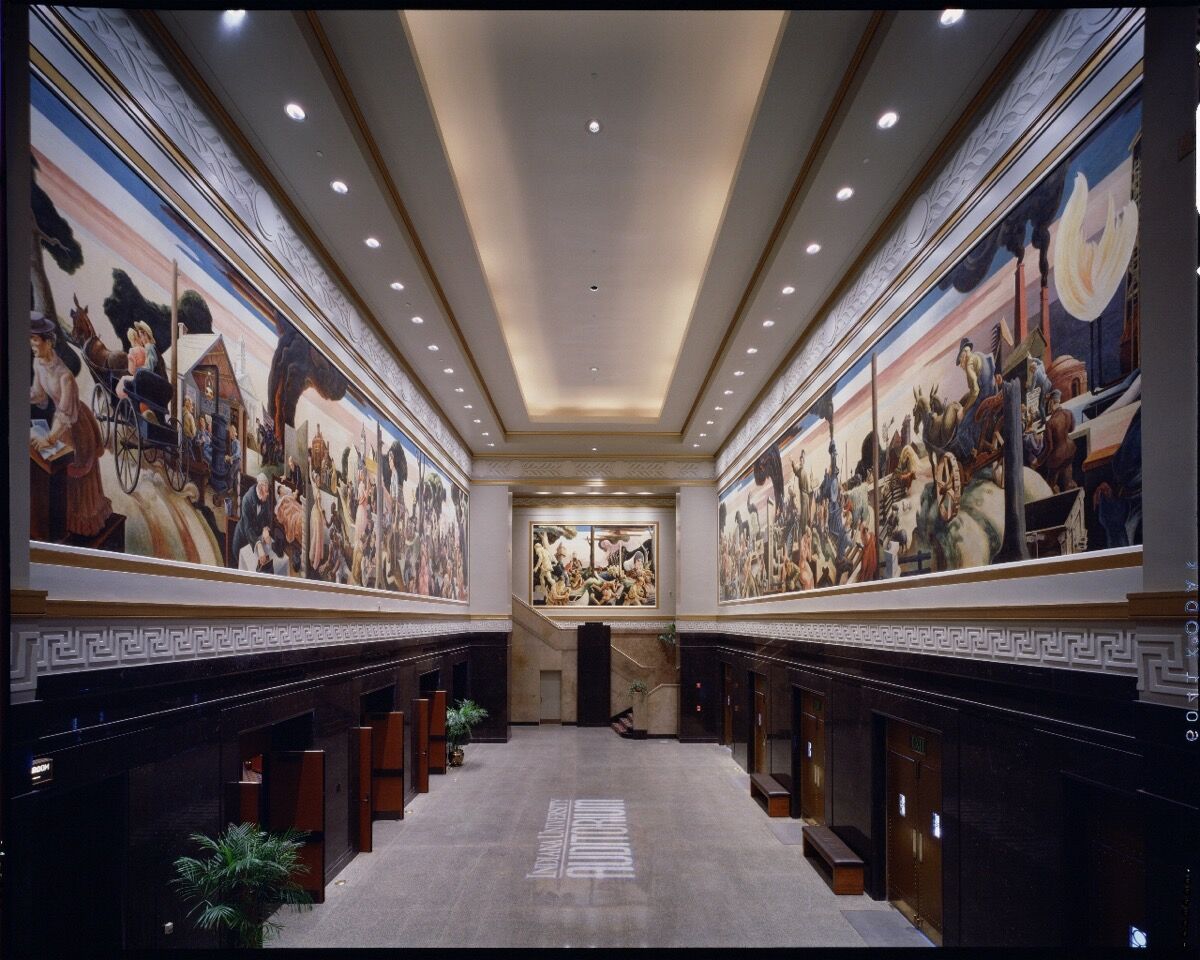 On the morning of December 9, 1941, Indiana University President Herman B Wells instructed that class be delayed for a gathering of “importance and historical value.” After years of planning and construction, the university was finally unveiling its auditorium. And the celebratory program—attended by the governor—was deemed unmissable. But the building itself was overshadowed by the newly installed murals inside the auditorium and two other campus buildings. Though hailed as a masterpiece, the artwork set off a 75-year controversy.
The creator of the 250-foot-long painting was
Thomas Hart Benton
. An artist at the forefront of
American Regionalism
, the Missouri-born Benton traveled to Bloomington for the ceremony unveiling his depiction of the evolution of the Hoosier state from its first inhabitants through 1933. Unfolding across 22 panels, the work shows fur traders, Rappites, and Speedway racers; quarries, coal mines, steel mills; and Abraham Lincoln, feminist Frances Wright, and Civil War-era governor Oliver P. Morton.
Today, conversation around what IU students colloquially refer to as “the Benton murals” concerns a single scene in the 9th panel on view in the Woodburn Hall, room 100. The dramatic image shows one of the most influential organizations in Indiana’s history: the Ku Klux Klan, burning a cross. 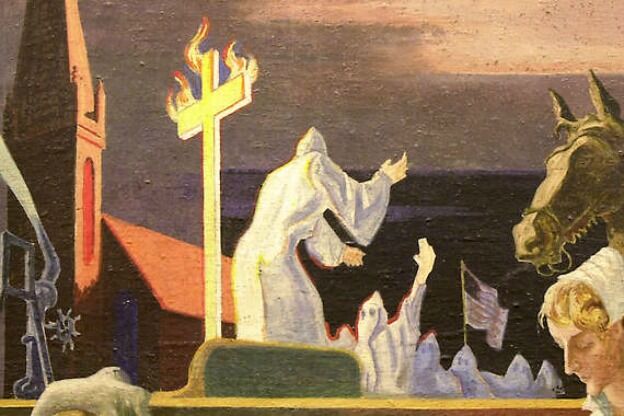 Critics argue that the panel should be moved given that students who use the lecture hall for class shouldn’t be forced to see the symbols of hate and racism. In response, proponents say that the KKK is an undeniable part of Indiana’s history and, when seen in context, the panel celebrates the group’s downfall.
But with the resurging visibility of white supremacist movements in wake of Donald Trump’s presidency, the murals bring into question just how far we are from what it shows. While historical relevance is one argument for keeping the panel in Woodburn Hall, what happens when the past feels all too present?

The Man behind the Murals

Almost 10,000. That’s how many egg yolks Benton went through to make his tempera for the murals. The unusual type of paint requires additional upkeep, says IU art curator Sherry Rouse—well worth it, given that the work is what Rouse calls the institution’s “most valuable, prized possession.”
One of the most popular and patronized painters of the pre-World War II era, Benton’s murals are the highlight of his oeuvre. Disassociating from the majority of his contemporaries in New York, his work depicted the culture of the Midwest, widening the scope of what constituted American art. In the 1930s, even
Jackson Pollock
was a dedicated follower. And in 1934, Benton became the first artist to be featured on the cover of TIME magazine—printed in color, no less.
His persona didn’t get such rave reviews. Referred to as a “prickly American Regionalist” by New York Times critic Karen Rosenberg, Benton rejected everything cosmopolitan and, in turn, everything cosmopolitan rejected him, including the
AbEx
painters rising to prominence. Seen as relatively retrograde, Benton was further ostracized in 1941 when he critiqued the American art world, including the presence of “the third sex” (a reference to non-heterosexual people).

The IU murals would become his most controversial work of art. In 1932, Benton presented his sketch to the Indiana State Legislature, which commissioned the piece for the Chicago World’s Fair. But Colonel Richard Lieber, who headed the project, wasn’t happy with the prominent inclusion of the Klan in the State’s narrative in the panel now titled “Parks, the Circus, the Klan, the Press.”
In the early 1920s, the peak of Klan activity in the state, more than 30 percent of Indiana-born white men and pledged their allegiance to the KKK, totaling over 250,000 Hoosiers. The group “captured” Indiana’s government by helping to elect pro-Klan candidates to office, and by the mid-1920s, more than half of the state legislature were Klan members.
“Lieber thought it was like airing dirty laundry [when he wanted to] promote Indiana,” says Nanette Brewer, the IU Art Museum Curator of Works on Paper and author of Thomas Hart Benton and the Indiana Murals. “But Benton argued that if you don’t show both pros and cons [of the history], no one will believe anything.”
According to Brewer, Benton managed to win over the group of legislators. Still, the murals languished in storage for six years after the world’s fair, up until President Wells requested they be installed at IU in 1941. And now, even 75 years after its premiere at the university, the murals continue to instigate conversations and criticisms. 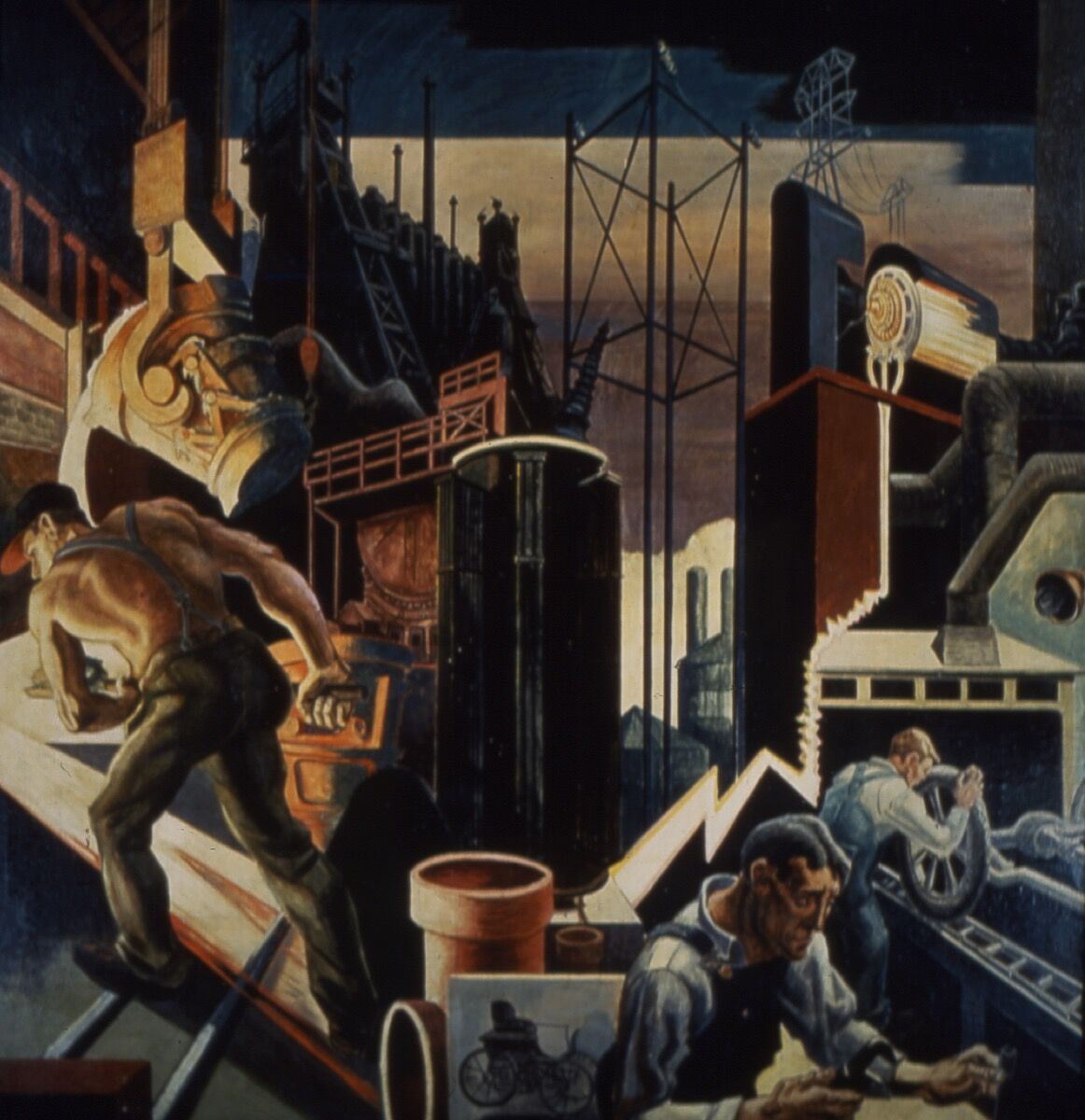 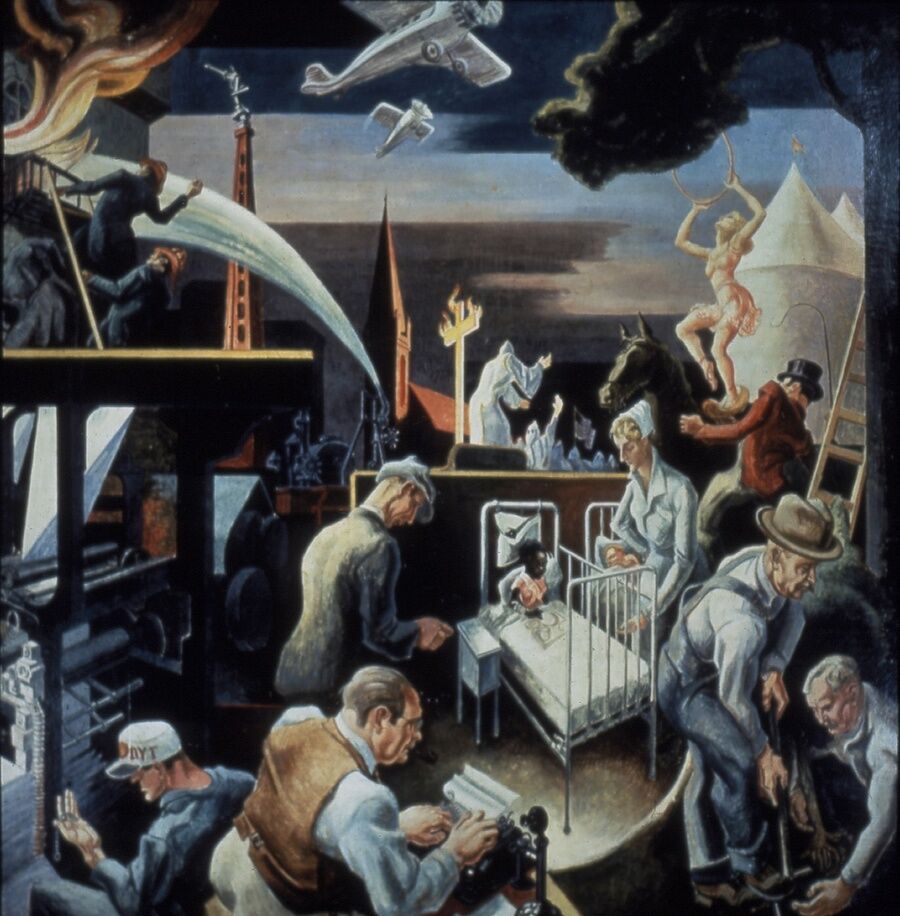 In 1999, a group spray-painted the panel with the phrase “Ban the Klan.” And in 2002, the school’s Black Student Union fought to have the murals covered. In response, the university collected 30 student complaints, and presented them to the chancellor. Unlike Lieber, the students weren’t looking to whitewash Indiana’s history. Rather, they said the panel lacked context, and was inappropriate for a classroom setting. Moreover, on a campus marked by incidents of racism, the image was disturbing and alienating.
“To have a painting in Woodburn Hall of such a degrading group is an insult to my ancestors as well as my culture, [and] I cannot go to a school that promotes diversity, and yet has a painting of such a group,” one testimony read.
Another student voiced cited the effect of the murals on a campus starkly lacking in diversity: “The KKK in the mural is made even more offensive by me being a minority in a class where I am the only face of color. It is located in a classroom and I find that unfair and inappropriate.”
When Al Sharpton, a 2004 candidate for the Democratic presidential nomination, visited the campus, he said the panel should be moved to a museum, not shown in a public university hall where students are forced to sit in front of an illustration that surfaces historical trauma, eliciting visceral pain.
Immediately after Sharpton’s visit, former IU President Adam Herbert defended the murals. “As a black man who lived through the segregated realities of the South, I think it is important that there be a reminder of what we had to live through: the pain, the suffering, the fear,” Herbert told the Associated Press.
Proponents also point out that removing the mural section would cause irreparable physical damage. But more debatably, they echo Benton’s original argument: If the work is instigating conversation, that’s only a reason for keeping it up.
“The fact that people are still having reactions [to the murals] tells me that we clearly haven’t moved beyond race issues in this country,” Brewer says. “These issues remain relevant.”

In 2002, the year the BSU attempted have the murals removed or covered, a police officer was suspended for sketching a drawing of the KKK staring down a well at a black man. At the time, Chancellor Sharon Stephens Brehm acknowledged that despite IU’s pledged commitment to diversity, the university had fallen short.
“[Having these murals is] particularly discomforting on a campus where African American students are only 4 percent of our student body and 4 percent of our faculty,” Brehm said, after which she called for “more diverse art” on campus, and announced that her office would provide $1.2 million over four years towards programs geared to diversifying faculty and students.
Today, Brewer recognizes the validity of the negative reactions, but stresses the importance of context. “When you first see the [KKK] and don’t know the meaning [of the mural], I understand why you would react negatively,” Brewer says.
An informal video teachers can show and panels accompanying the work explain that while the 9th panel depicts the KKK, it also illustrates how the Indianapolis Times investigated the Klan’s racketeering and corruption in Indiana’s state elections. The reporting earned the newspaper the Pulitzer Prize for Public Service in 1928. And the murals also show Indiana’s integrated healthcare system through a young black girl being treated at a hospital.
Ultimately, good intentions cannot dictate subsequent reactions or sentiments. And while there haven’t been any larger debates or demonstrations around the murals in the past few years, the absence of protest does not mean there is no discomfort or that underlying inequity no longer exists.
Despite Brehm’s directives, the campus is still overwhelmingly white, as only 3.9% of students and 3.3% of faculty are African Americans. Indeed, the work’s “context” doesn’t just include the rest of the mural’s message; that would require addressing the both inequality on campus and racist hatred in the country at large. Some students will perhaps read the informational panel outside the room, knowing what they will see on their first day of class; some will wander in for a lecture one afternoon, unprepared for what their eyes will meet. And still for others, it might make no difference.
—Amanda Arnold
Related Stories