How Museums Handle Forgeries in Their Collections 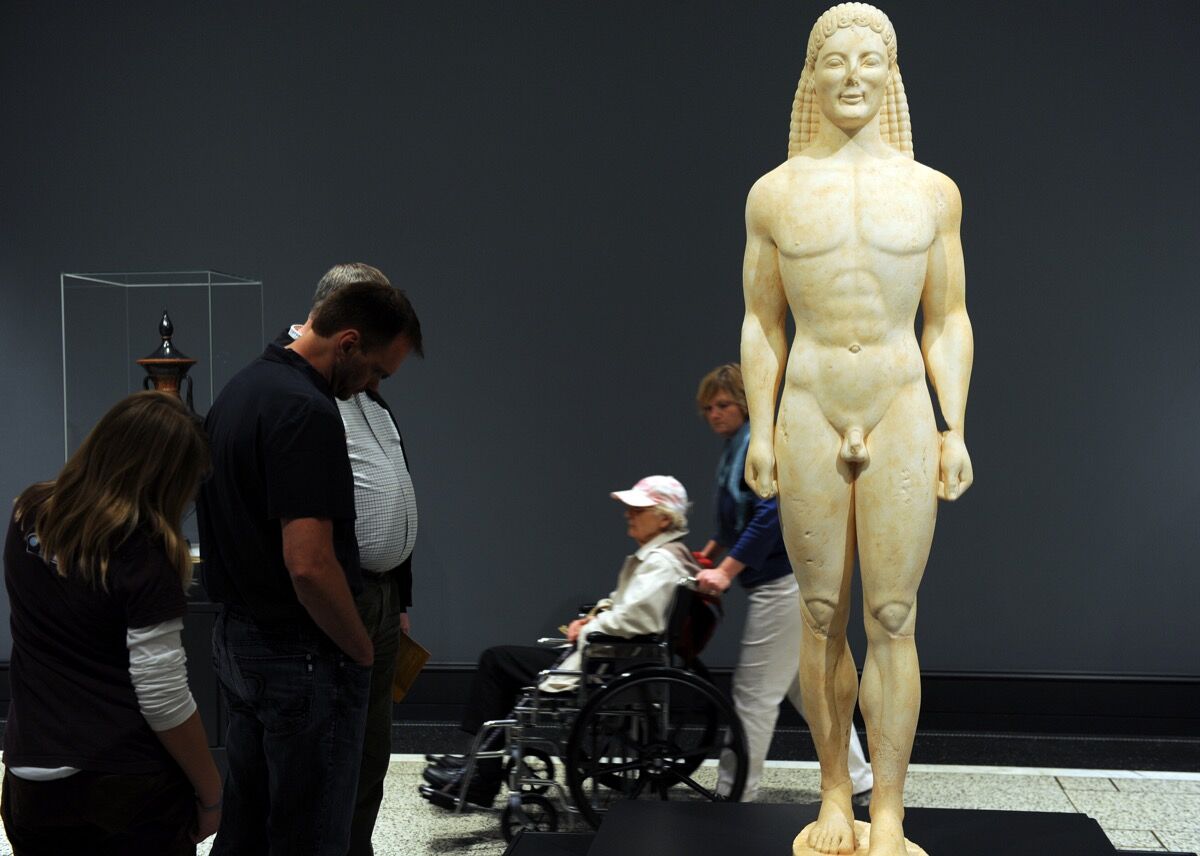 Art forgeries are surprisingly common, to the point that scandals hit the news regularly. No one is safe from deception—forgers can be skilled enough to dupe experts at some of the world’s most prestigious museums. So what do these institutions do when valuable objects within their collections are challenged as being fake?
Among the most famous disputed works is the Getty Kouros. Last month, after years of debate and controversy, the Getty Museum finally conceded that its ostensibly
ancient Greek
statue is actually a modern forgery, and removed it from view. The museum had purchased the kouros—the art historical term for a statue of a nude youth—in 1985 for around $9 million.
Historians began questioning the statue’s authenticity the moment it emerged onto the public scene. The museum attempted to address forgery concerns in 1992 when it hosted a colloquium of scholars and scientists. Some experts asserted that the statue’s unusual and anachronistic style evidenced its modern origin. Critics also pointed to significant stylistic differences between the statue’s head and its feet, which made it difficult to trace to any known ancient Greek workshop. But others argued that the statue was real, and that its eclectic style was not sufficient to rule the work a fake. Lacking scholarly consensus, the authenticity of the work remained in limbo. 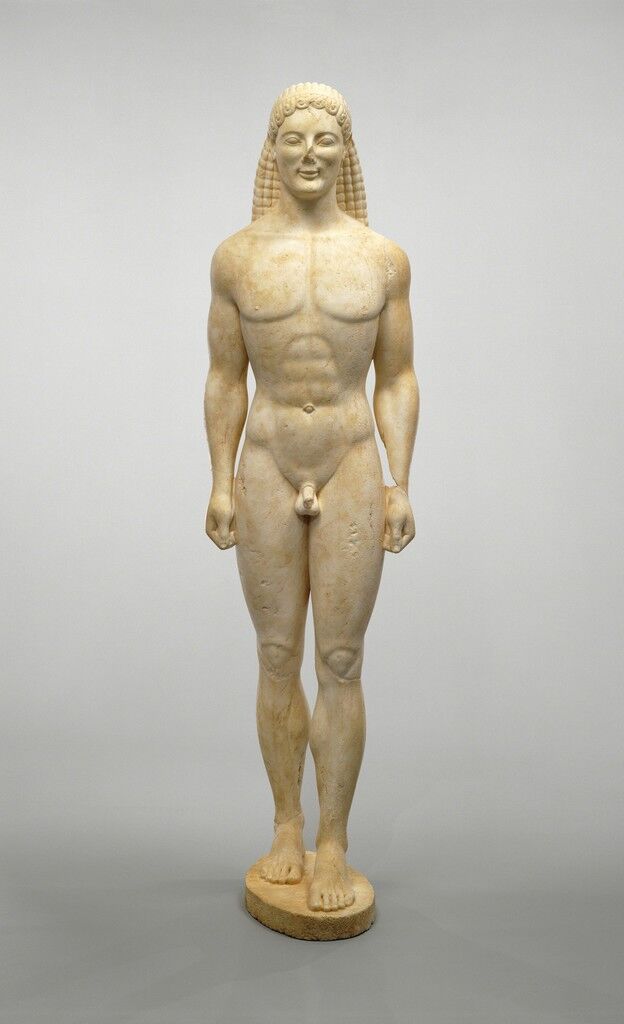 When art historians disagree over an artwork, sometimes scientific analysis of the object’s material can definitively date the piece. But it isn’t always so simple. Scientific analysis initially confirmed the Getty Kouros as an ancient object prior to the museum’s purchase, primarily because researchers found evidence of a chemical process that (they thought) could only occur naturally over centuries. Only later did scientists realize this process could be replicated in a lab. Skilled forgers are known to use age-appropriate materials to create fakes, and the forger in this instance artificially aged the marble.
The kouros' provenance is also murky. It appeared on the market in 1983 when dealer Gianfranco Becchina offered the work for sale. (Becchina later became infamous for dealing in looted works.) He provided documentation that purportedly traced the statue’s excavation back to Greece in the early 20th century. But there is no site of origin or excavation documentation to validate this claim, and provenance documents from the dealer turned out to be fabricated.
Until recently, however, the statue remained on view, next to a wall label reading “Greek, about 530 B.C. or modern forgery.” It was only in April, after major renovations at the Getty Villa, that the kouros disappeared from view and was placed in storage. “It’s fake, so it’s not helpful to show it along with authentic material,” Timothy Potts, the museum’s director, told the New York Times.
This is not the first time a museum has wrestled with the authenticity of a work in its collection. Collectors have been duped for millennia, and the forging of antiquities actually dates back to antiquity itself. The number of forgeries grew during the Renaissance, when collectors began aggressively acquiring ancient art. 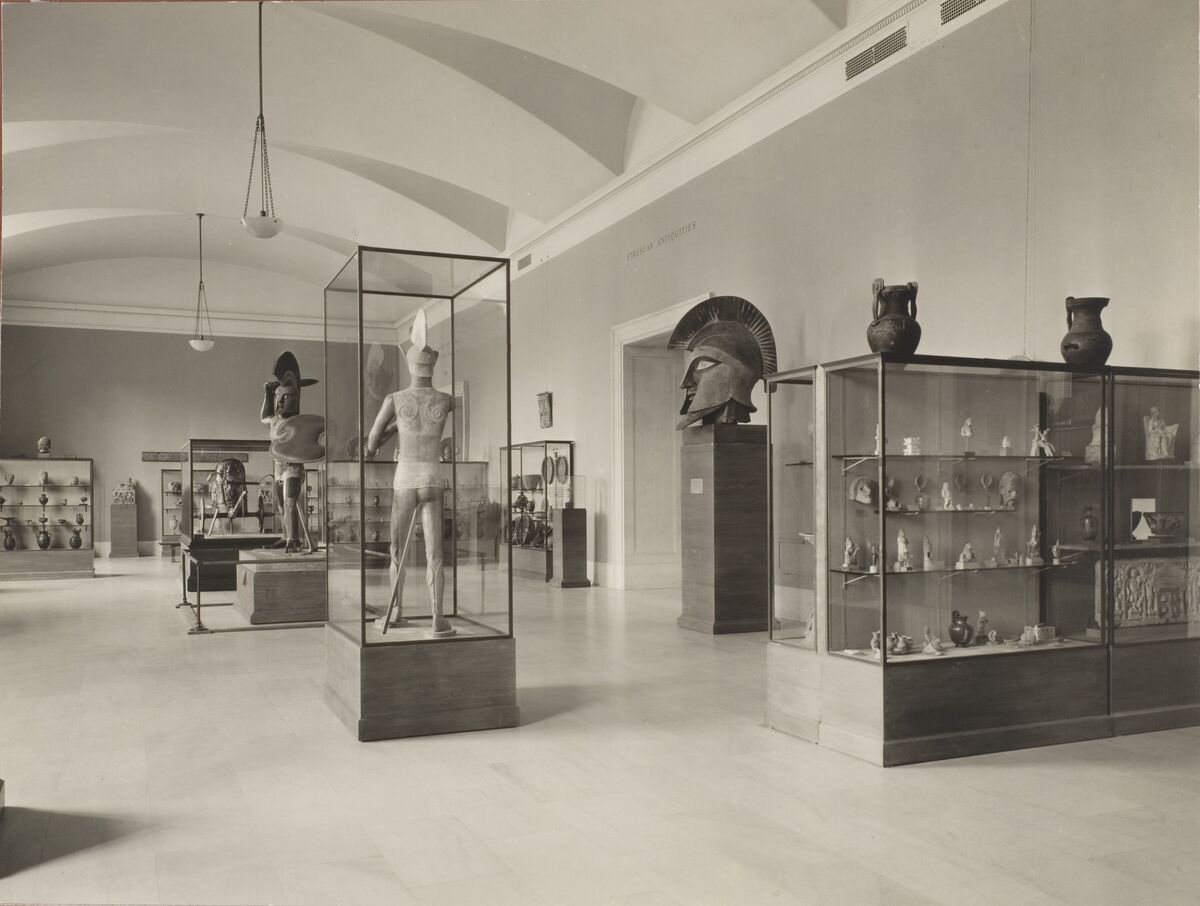 Advertisement
As the Getty Kouros saga shows, one of the difficulties in classifying a work as a forgery is that attribution is fluid. Experts disagree over authorship, opinions shift over time, and technologies develop to reveal new information. Not surprisingly, authentic works have been downgraded, only to be reattributed later. Famously, the Metropolitan Museum of Art downgraded a
Velázquez
work, bequeathed to the museum in 1949, from a work created by the painter himself to one by the “workshop of Velázquez” in 1979. Forty years later, in 2009, the Met re-authenticated the painting as a real Velázquez. The attribution, made after the artist’s signature style was revealed by a cleaning and technical study of the piece, was proudly accompanied by academic publications and press releases.
Unfortunately, the Met has also unwittingly displayed forgeries, such as a group of Etruscan terracotta figures. The three figures, purchased between 1915 and 1921, were ostensibly discovered in an Italian field, but were actually created in a workshop. The works were put on display in 1933 and remained there for nearly three decades, during which time scholars voiced concern about the attribution.
Scientific analysis eventually confirmed this skepticism. Researchers found that the Met’s figures included a pigment that wasn’t used by the Etruscans. In 1961, the museum officially announced that the works were forgeries. The figures once identified as “5th Century B.C.” were relabeled as “modern.” Like with the Getty Kouros, the Etruscan warriors went into storage, only viewable to scholars and students. 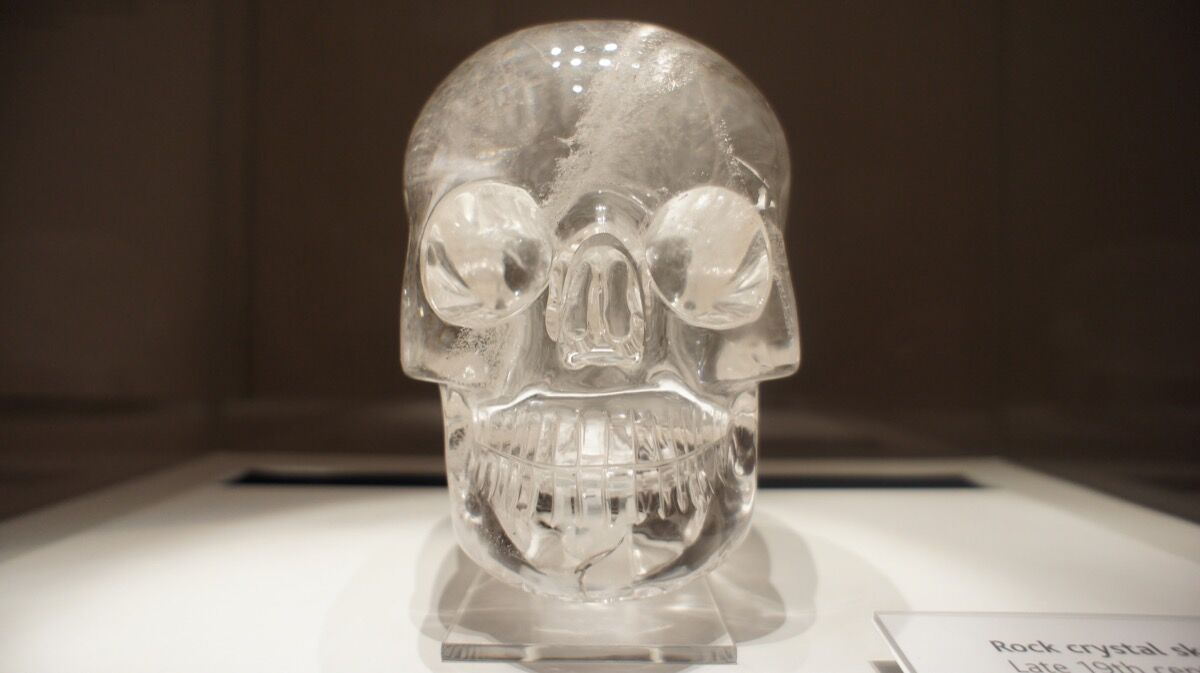 An Aztec crystal skull at the British Museum. Photo by James Mitchell, via Flickr.

One of the most alluring forgeries can be found at the British Museum: a crystal skull, known as an Aztec symbol of death. There are a number of crystal skulls in private and public collections, fascinating because of the mystery surrounding their origins and purported supernatural powers. Some posit that the skulls were carved thousands of years ago and that they have healing powers. There are even suggestions that their existence indicates that aliens visited the Aztecs.
Although a captivating story, science has proven that these skulls are neither ancient nor magical. Electron microscope analysis revealed that the skulls were made with modern instruments, and that they likely date to 19th-century Europe. And since none of the skulls were found during official archaeological excavations, the British Museum conjectures that they are all fakes.
While the museum recognizes its own skull as a fake, it devotes a lengthy page on its website to the object. Interestingly, the page does not use the terms “fake” or “forgery,” but concedes that the skull is “not an authentic
pre-Columbian
artefact” and “did not come from a source within the ancient trade network of Mexico.” The museum also acknowledges that its skull does not have supernatural properties; rather, it suggests that the skull encourages visitors to learn more about Aztec culture.
So, yes, forgeries understandably may not command the same respect and value as authentic works. But they can still attract people to museums, and can focus one’s attention on the real history and ancient culture behind the modern rip-offs.
Leila Amineddoleh
Related Stories