The Mysteries of Pieter Bruegel the Elder’s Peasant Paintings 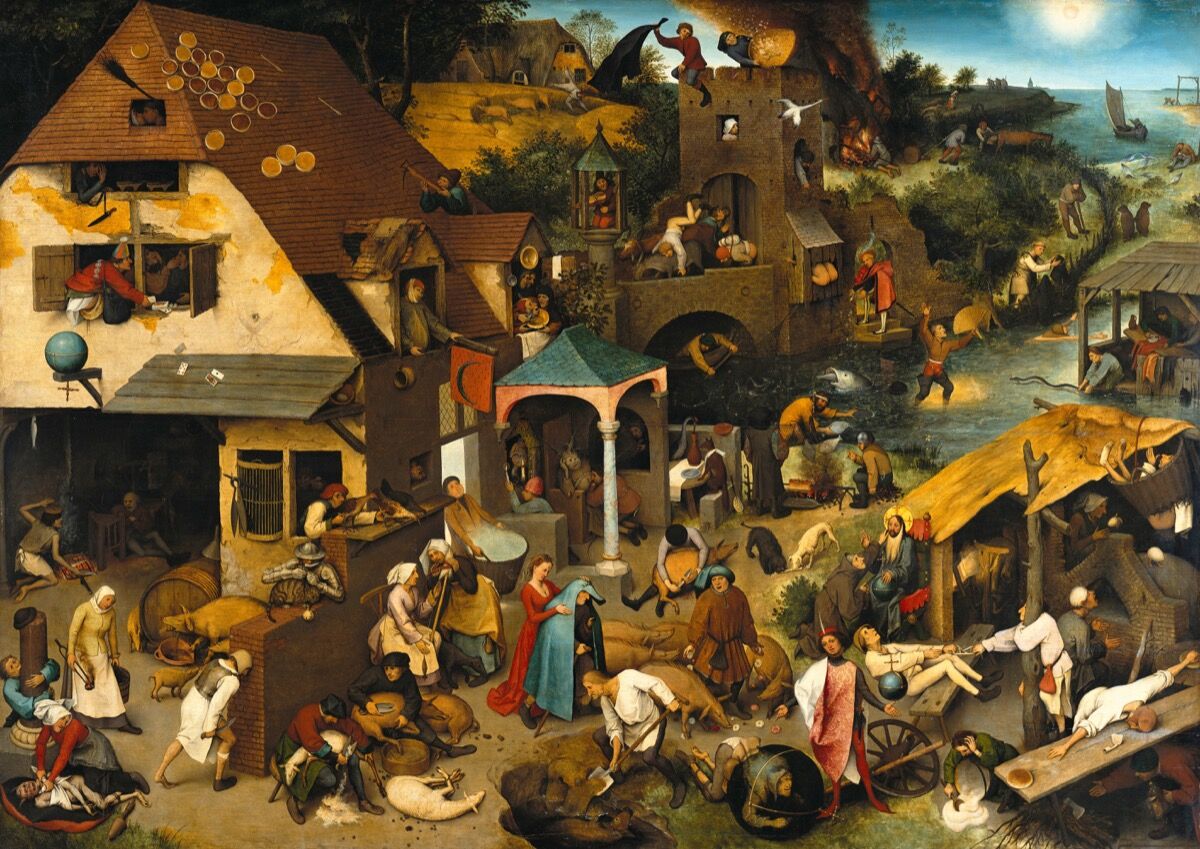 Flemish painter
Pieter Bruegel the Elder
is best known for his busy tableaus of 16th-century Netherlandish peasants that range from the banal to the absurd. Chock full of peculiar characters and details, The Fight Between Carnival and Lent (1559) depicts (among many other things) one man straddling a barrel while wielding a skewered pig, another playing a stringed instrument while wearing a pot on his head. On the other hand, characters engage in everyday tasks, too: Women can be seen slicing fish, panhandlers begging, and a festive group dancing in a circle in the background.
So many bodies populate the depicted village that the viewer can return to the picture again and again, spotting new details each time as though scanning a page from Where’s Waldo? Alternately, the 1565 work The Hunters in the Snow offers a more serene winter landscape. Three men and their dogs returning from a hunt trudge through the snow towards a village in the valley below. In this idyllic town, Lilliputian peasants skate and play a type of proto-hockey on the frozen lake. Off to the side, men and women build a fire outside a brick inn. In the cold, life is more subdued.
Despite the difference in tone, both paintings convey Bruegel’s oeuvre-defining attention to rustic life in the Low Countries (which then encompassed Belgium, the Netherlands, and French Flanders) during the
Northern Renaissance
. His work is so complex, and the artist’s own history so mysterious, that even almost 450 years after his death, we still don’t know exactly why Breugel chose his subject matter and the attitude he held toward the communities he captured. 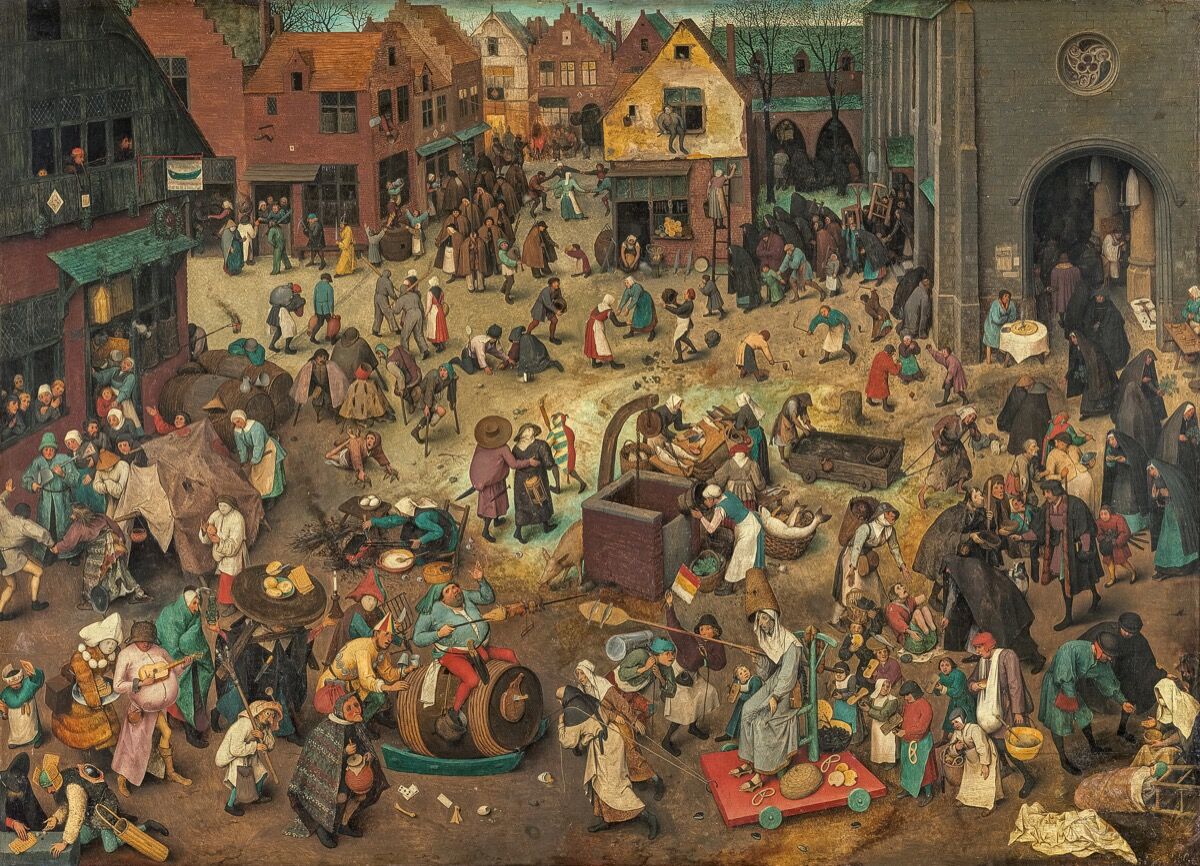 Pieter Bruegel the Elder, The Battle between Carnival and Lent, 1559. Photo via Wikimedia Commons.

“We’re so used to giving a momentary glance and moving onto the next painting,” says Larry Silver, a professor of art history at the University of Pennsylvania. Bruegel’s work “demands a very different kind of looking.” (To celebrate the 450th anniversary of his death, Vienna’s Kunsthistorisches Museum will open a major exhibition of Bruegel’s work this October. The institution owns 12 of the approximately 40 paintings by him that have been preserved.)
Bruegel was born in the Netherlands around 1525. To his south, in Florence,
Michelangelo
was at work on a chapel for the Medici family (some of the day’s most important patrons), and celebrated masters
Leonardo da Vinci
and
Raphael
had recently died. The Italian
Renaissance
had just peaked.
At the time, Lutheranism and Calvinism were spreading across the Netherlands, ushering in the larger, Europe-wide Protestant Reformation. The Dutch Revolt, a Protestant-led battle against Spanish Habsburg rule, began a year before Bruegel died in 1569, a result of political and religious differences in the Netherlands. “Those events were very unsettling to him,” Silver explains. “There were political crackdowns on religious grounds. It was a pretty rough moment. Some of that pessimism—you might call it cynicism—gets into his art.”
In that light, Bruegel’s style most closely resembles that of his fellow Dutchman
Hieronymus Bosch
, an artist most famous for his ghastly, chaotic triptych, The Garden of Earthly Delights (ca. 1490–1500). The work displays scenes of earth, hell, and paradise, filled with nude bodies cavorting, swimming, and suffering grotesque punishments at the hands of monsters. While Bosch’s scenes are explicitly biblical, when Bruegel depicted religious figures, he often invoked salt-of-the-earth subjects. In The Census at Bethlehem (1566), for example, the Virgin Mary rides into the Low Countries region of Brabant on a donkey, like any other peasant. 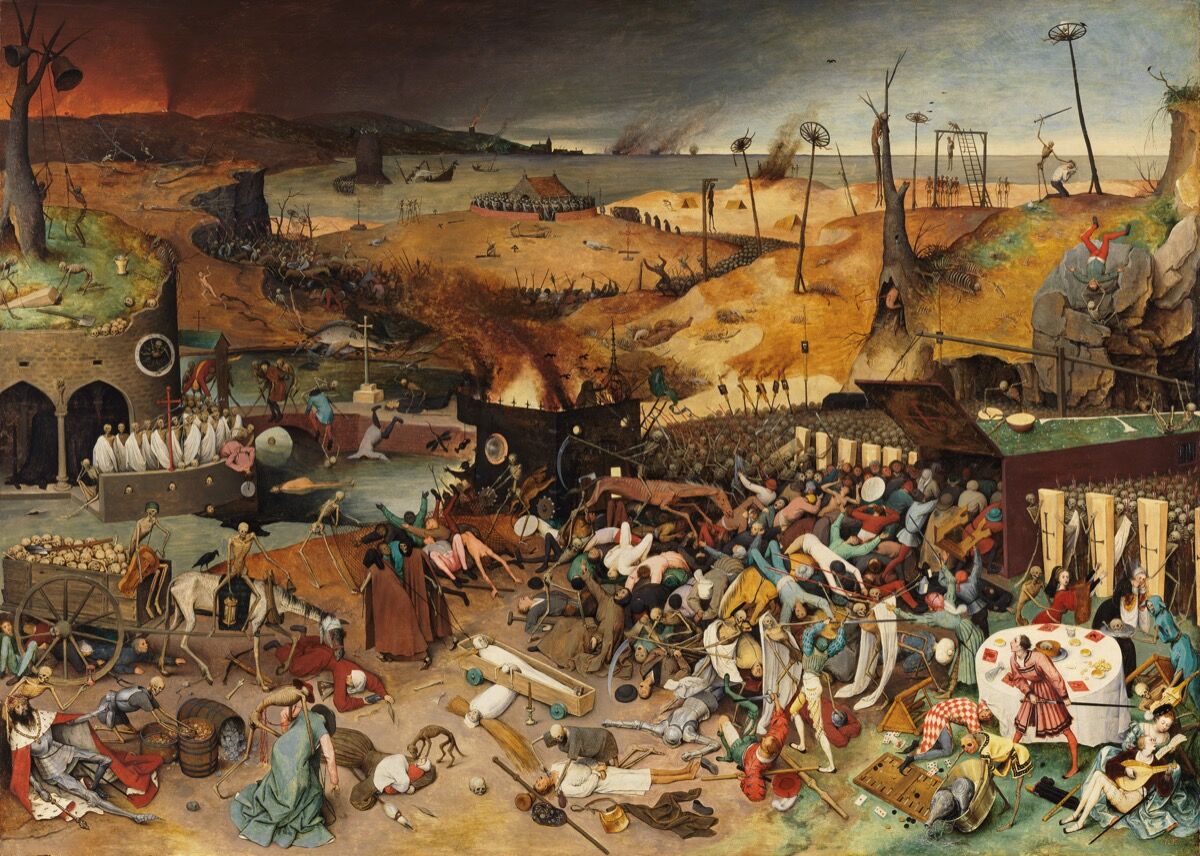 Advertisement
Bruegel did sometimes dabble in supernatural, debauched, and terrifying imagery. In The Triumph of Death (c. 1562–63), bodies topple over one another in an apocalyptic, charred landscape. A skeleton army battles the humans, some of whom hang from far-off gallows. The deeply disturbing picture brings Bosch’s hellscapes into our world.
In the 2016 book Bosch and Bruegel: From Enemy Painting to Everyday Life, Joseph Koerner, professor of the history of art and architecture at Harvard University, surmises that genre painting, or pictures of the everyday, began with Bosch. Breugel, he writes, “brought the diabolical visions of Bosch down to earth, first to the realm of human culture, then to the realm of nature.”
But there’s much more to Bruegel than his humble peasant scenes. Nadine M. Orenstein, Drue Heinz Curator in Charge at the Metropolitan Museum of Art, particularly admires how Bruegel rendered the natural world. In The Hunters in the Snow, a flat gray-green sky sits heavily above the snowy ground. “He captures the chill in the air,” she says. “He’s able to capture weather like no other artist.”
According to Orenstein, viewers tend to focus on Bruegel’s figures and don’t celebrate him enough for his landscapes. In the six paintings in his “Seasons” series (which includes The Hunters in the Snow), Bruegel alternately captured the warm and languorous days of haymaking; the overcast, bare-tree months of February and March; and the light-spattered, golden fields during the autumn harvest. 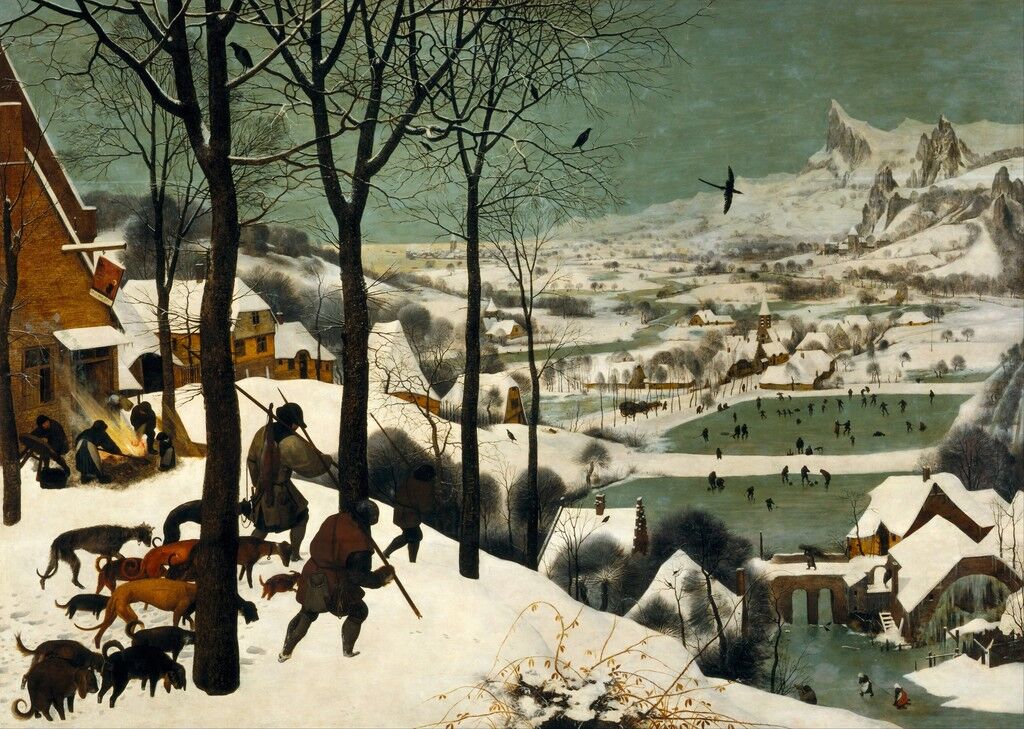 Pieter Bruegel the Elder
The Hunters in the Snow, 1565
Kunsthistorisches Museum, Vienna
In addition to painting, Bruegel created many prints. Partnering with one of the day’s most important publishers, Hieronymus Cock, he produced a series of illustrated proverbs, among other subjects. Many are horrific and monstrous—in Big Fish Eat Little Fish from 1557, a man cuts into the stomach of a giant beached fish while smaller fish pour out of its incision and mouth (and even smaller fish cascade out of their mouths). With Bosch’s devilish verve, Bruegel also rendered the seven deadly sins as landscapes filled with ferocious animals, bestial sex acts, and detached body parts. (His seven virtues are tamer, but still crowded with people.)
In 1604, Karl van Mander wrote the first biography of Bruegel by piecing together anecdotes from people who knew the artist and looking at the paintings, either in person or reproduction. (Bruegel had many Low Country patrons, who may have shown van Mander the work.) The biographer claimed that Bruegel would disguise himself as a peasant to attend local festivities (county fairs, weddings) as a means of developing his subject matter.
“I think you have to take some of these early biographies of artists with a grain of salt,” Orenstein says. This ambiguity has led to divergent theories about just what Bruegel intended when he rendered his often silly scenes of everyday people. Indeed, many of the paintings illustrate then-popular proverbs and folktales—some more cryptic than others—which would have entertained patrons, keeping them occupied as they sought meaning in each minute detail.
In the 1970s, scholars Svetlana Alpers and Hessel Miedema initiated a long debate about whether Bruegel’s portrayals were meant as positive or negative, humorous or serious. (Miedema proposed that, at the time, the Dutch didn’t really laugh at all.) In the 2006 book Pieter Bruegel and the Art of Laughter, Walter S. Gibson asserts that Bruegel’s aim was comedic: He wanted to make his normally solemn viewers laugh.
Regardless of Bruegel’s intentions, scholars agree on one thing: The paintings were commissioned and purchased by wealthy patrons, not by those represented in them. More interesting than Bruegel’s objectives, perhaps, is just why patrons desired these types of scenes in the first place. “The thing that’s so great about Bruegel is everybody can read things into [his paintings],” Orenstein says. “They’re mysterious and don’t give away a lot of clues.”
Alina Cohen
Related Stories 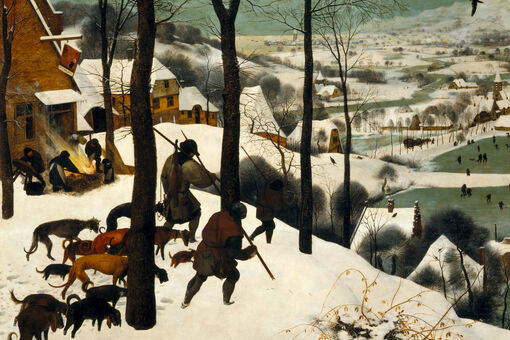