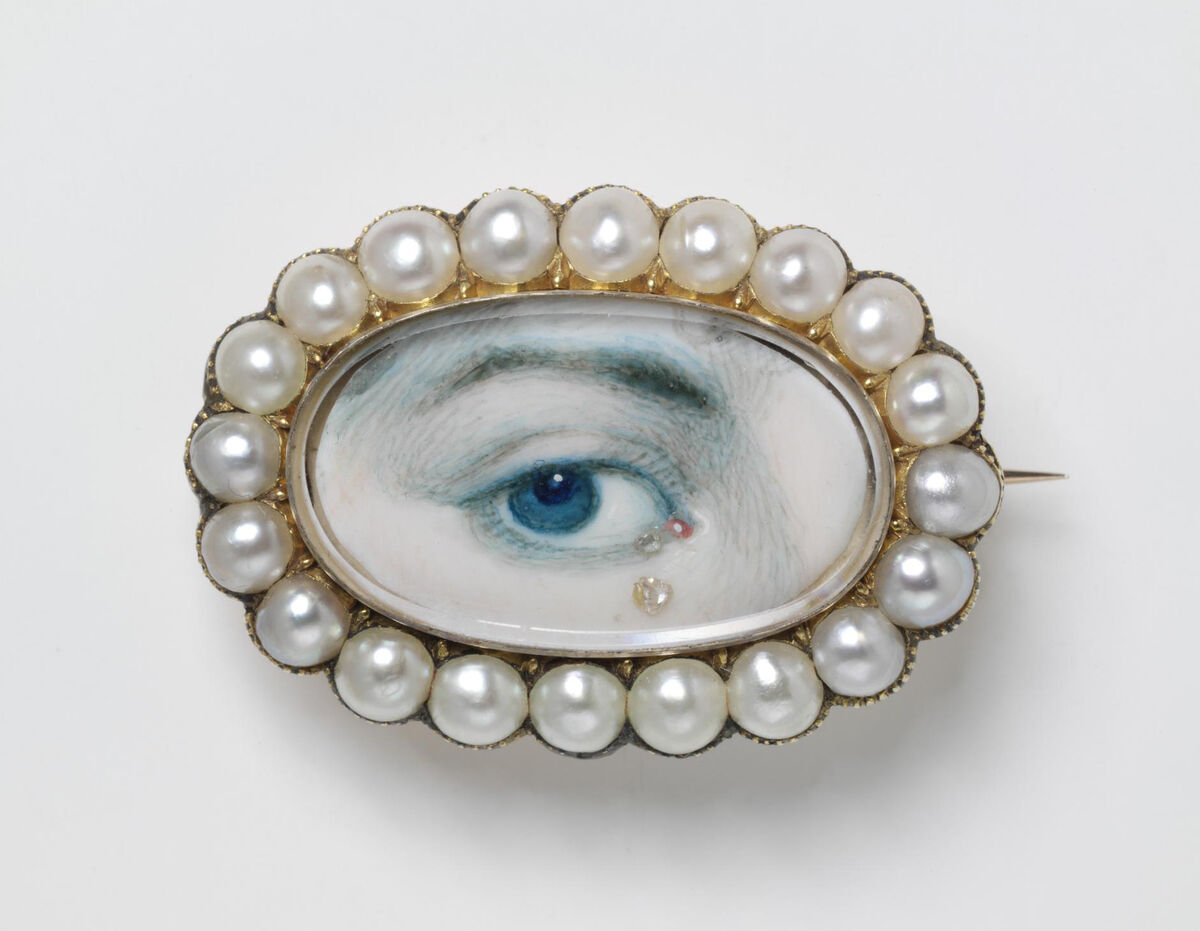 In 1785, when Maria Anne Fitzherbert opened a love letter from her admirer, Prince George of Wales, she wasn’t expecting to find an eye, gazing intently back at her.
The British prince was lovesick—and desperate. He’d fallen hard for Fitzherbert, but their courtship had been disastrous: Royal laws forbade a Catholic widow like his beloved from becoming a monarch. To make matters worse, the upstanding Fitzherbert had fled the country after the prince’s first proposal, in an attempt to avoid controversy.
But the prince was determined, and on November 3rd, he penned a passionate letter begging again for her hand in marriage. This was no ordinary proposal, though—it also contained a rare, spellbinding gift. “I send you a parcel,” George wrote in the letter’s postscript, “and I send you at the same time an Eye.”
Indeed, the package contained a very small, potent painting of George’s own right eye, floating uncannily against a monochromatic background. No other facial features anchored it, save a barely-there eyebrow. All focus was on the composition’s core, where a dark iris gazed ardently from behind a soft, love-drunk lid. 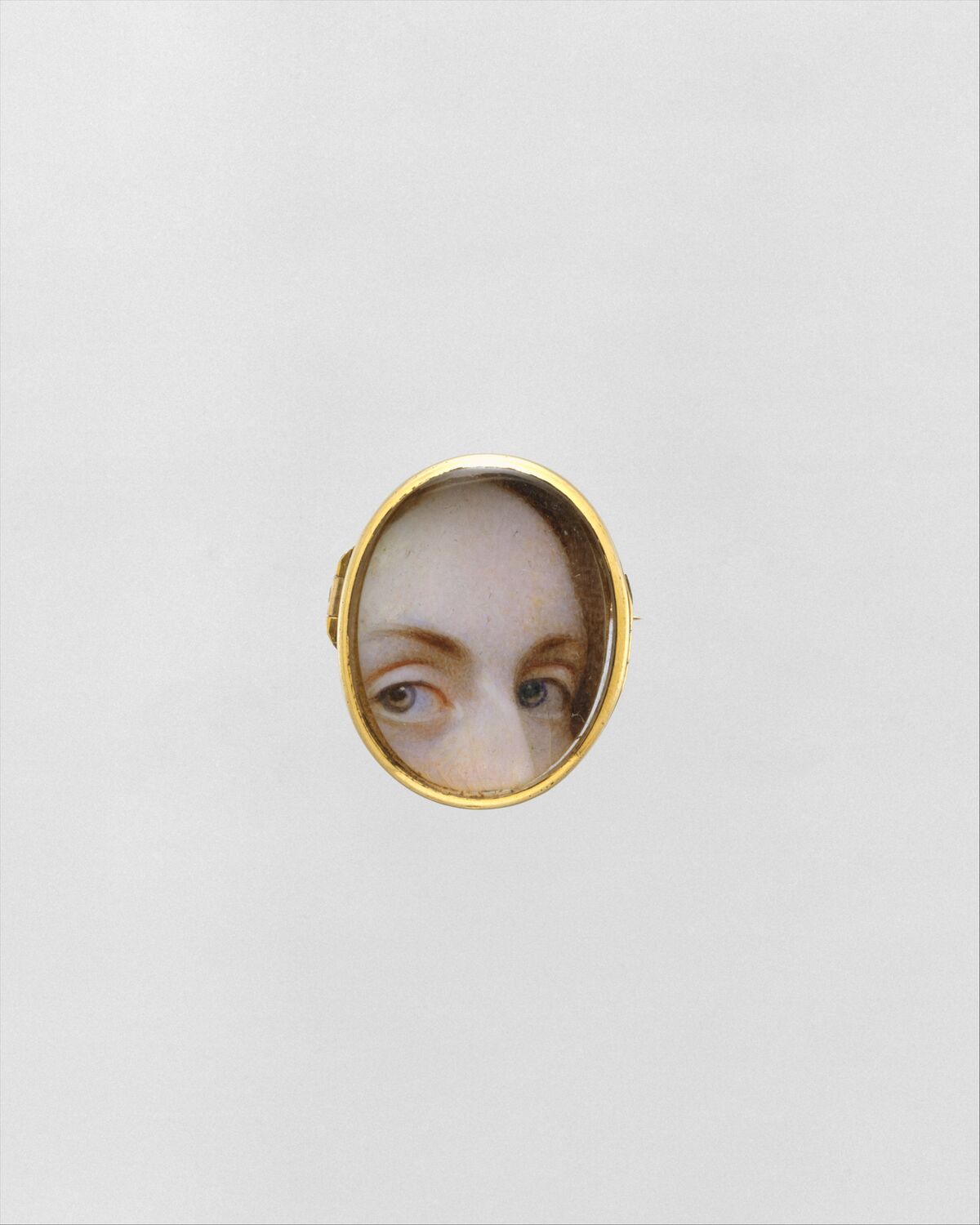 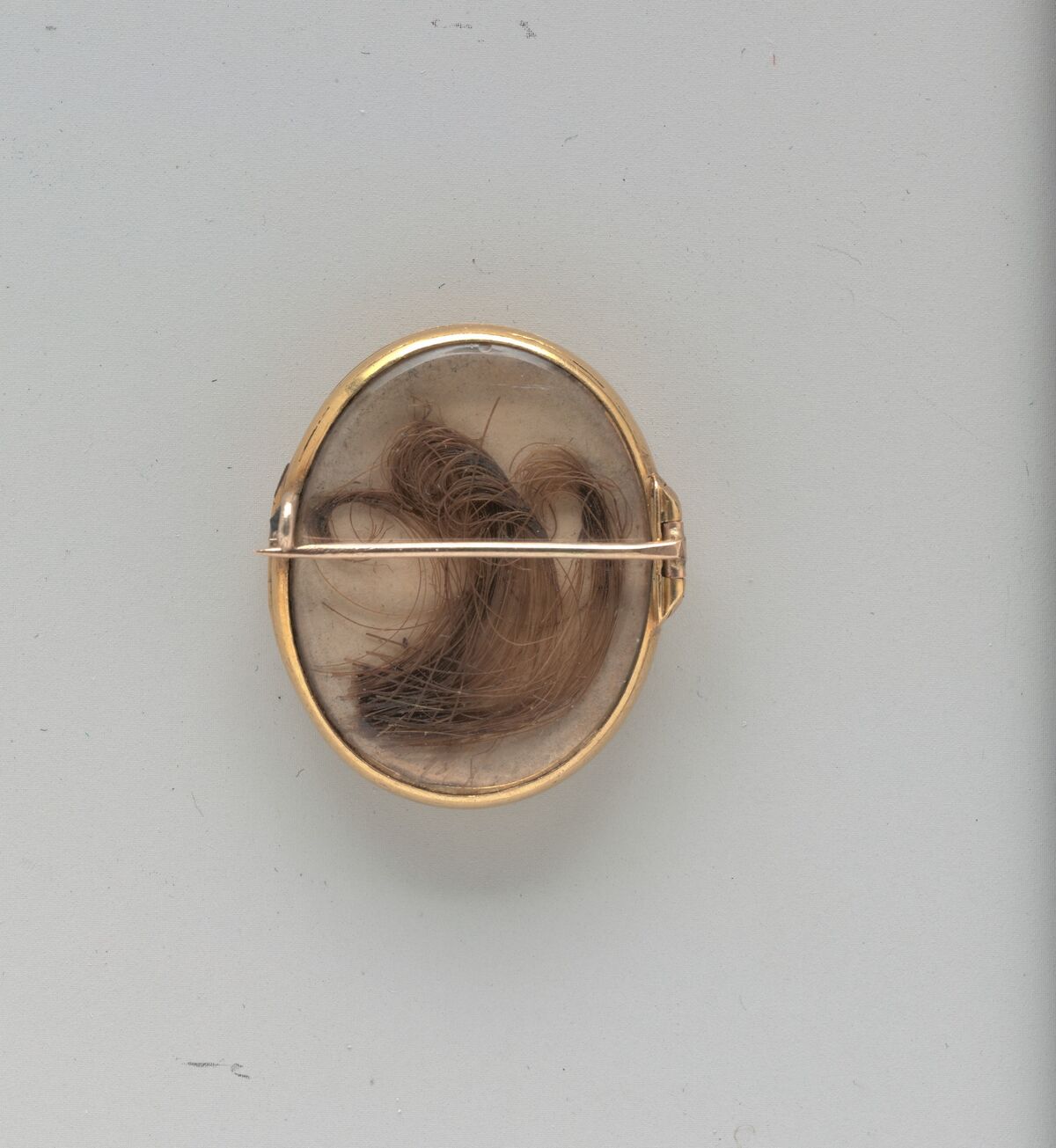 Lover's Eyes (back with lock of hair), ca. 1840. Courtesy of The Metropolitan Museum of Art.

No records document how Fitzherbert responded to the eye itself, but “it must have bolstered the prince’s marriage proposal,” as scholar Hanneke Grootenboer pointed out in her 2012 book Treasuring the Gaze: Intimate Vision in Late Eighteenth-Century Eye Miniatures. Soon after his letter, the star-crossed lovers wed in a covert ceremony. To cement the union, another disembodied eye was painted—this time in Fitzherbert’s likeness, nestled into a locket for the prince to treasure. No matter where his royal duties took him, George could open the jewel and receive his bride’s amorous gaze.
The Prince of Wales and Fitzherbert weren’t the only ones exchanging eyes in 18th-century England. Eye miniatures, also known as lover’s eyes, cropped up across Britain around 1785 and were en vogue for shorter than half a century. As with the royal couple, most were commissioned as gifts expressing devotion between loved ones. Some, too, were painted in memory of the deceased. All were intimate and exceedingly precious: eyes painted on bits of ivory no bigger than a pinky nail, then set inside ruby-garlanded brooches, pearl-encrusted rings, or ornate golden charms meant to be tucked into pockets, or pinned close to the heart.
As objects, lover’s eyes are mesmerizing—and bizarre. Part-portrait, part-jewel, they resist easy categorization. They’re also steeped in mystery: In most cases, both the subject whose eye was depicted and the artist who painted it are unknown. What’s more, until the early 2000s, little had been written about the objects’ history and significance, though they have been part of the collections of museums like the Cleveland Museum of Art, the Philadelphia Museum of Art, and London’s Victoria and Albert Museum. Big questions loomed: What sparked their popularity? Why had they faded so quickly from use? And why portray a single eye, as opposed to a whole portrait? 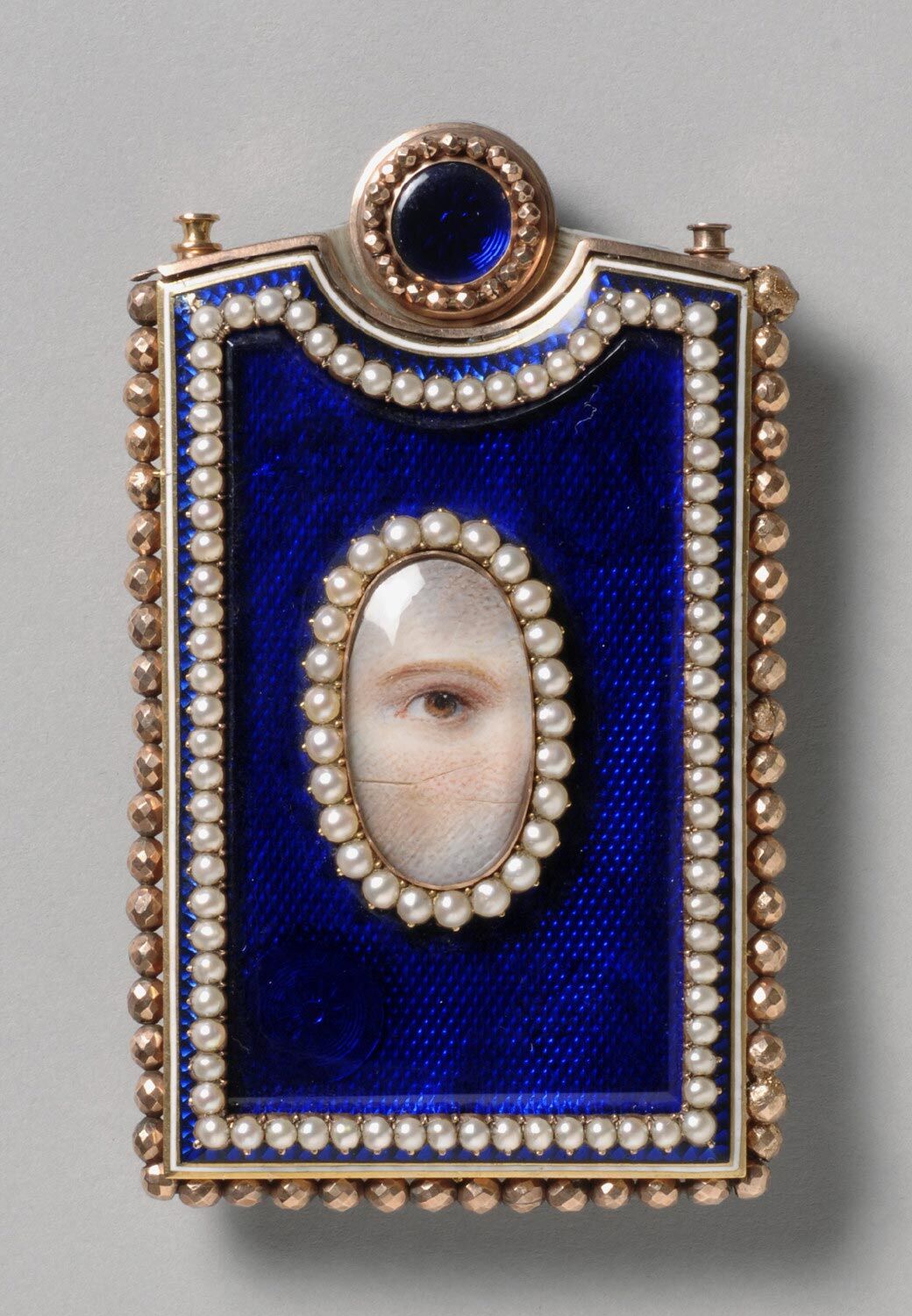 Memorandum Case with a Portrait of a Women's Left Eye. Courtesy of the Philadelphia Museum of Art. 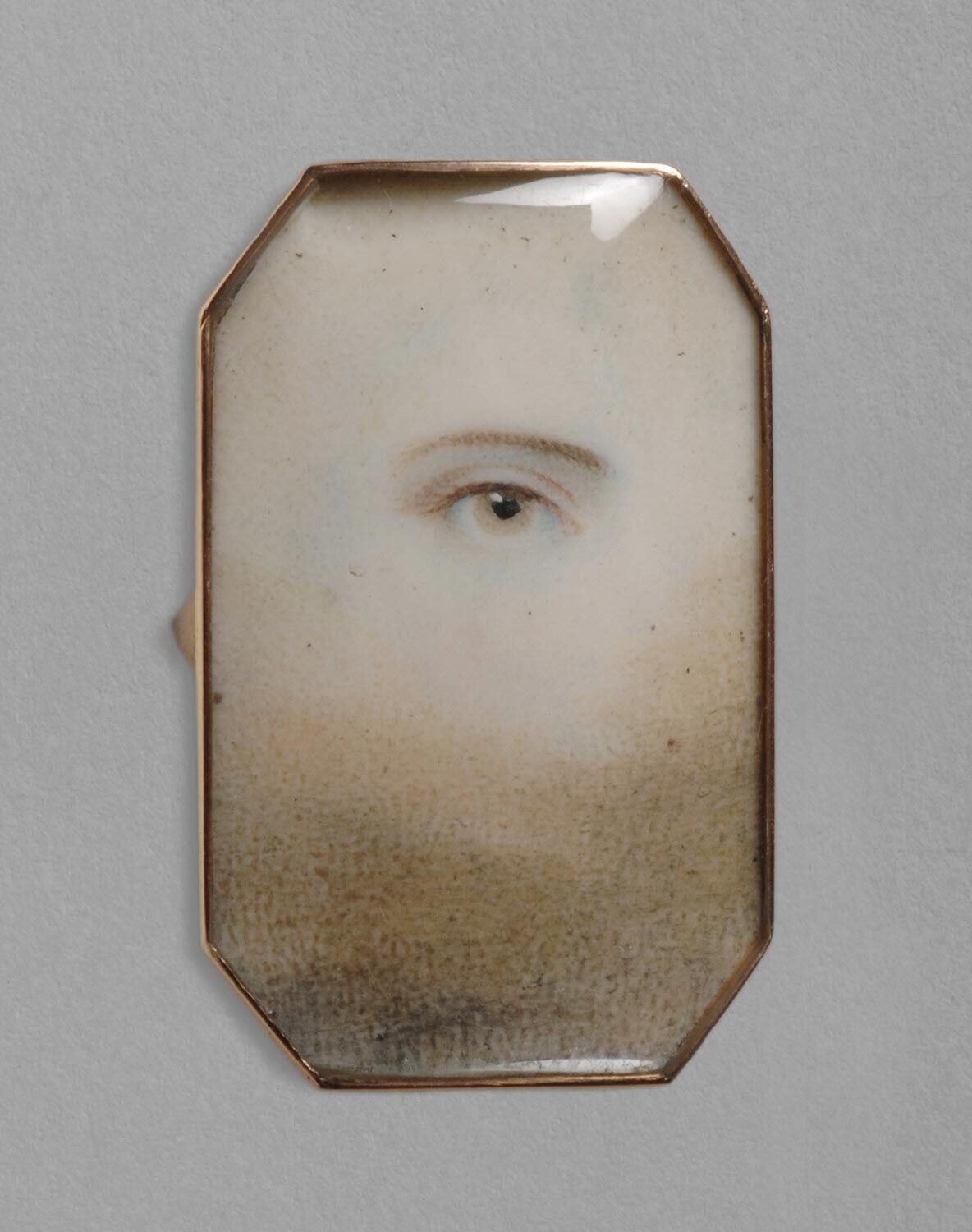 Portrait of a Right Eye (mounted as a ring). Courtesy of the Philadelphia Museum of Art.

Advertisement
Grootenboer, an art historian specializing in portraiture and the art-historical gaze, has made it something of mission to fill in these blanks. Some answers, she knew, resided in late 18th-century British culture. It was a time before photography, when “people were desperate to give each other not just images of themselves, but part of themselves,” she told Artsy. Before the advent of lover’s eyes, miniature portraits depicting a loved one’s entire visage had also become popular. (Often, they came with a lock or braid of hair affixed behind the tiny canvas.) Their purpose was adoration. By looking upon the little likeness, which was typically small enough to cradle in one’s hand, the recipient could “evoke someone’s face,” Grootenboer said. The paintings acted as tiny proxies to be kissed, pressed to bosoms, and talked to when the subject was out of reach.
But lover’s eyes were different. Instead of standing in for the whole person, they depicted just a minute feature. What’s more, they embodied a specific action: the gaze. “It is the look of someone that the [lover’s eye] is a carrier of,” Grootenboer explained. “It is the look that someone wants to imagine, and wants to feel as resting upon themselves.”
The act of looking, and its importance in late 18th-century British society, is central to deciphering the mysteries of eye miniatures. At the time, British culture “was infatuated with with seeing and being seen,” Grootenboer explained. Because social codes limited public interaction between people of the opposite sex, looks could more easily be exchanged than words. (These limitations also triggered the more illicit phenomena of peeping or keyhole-spying.) 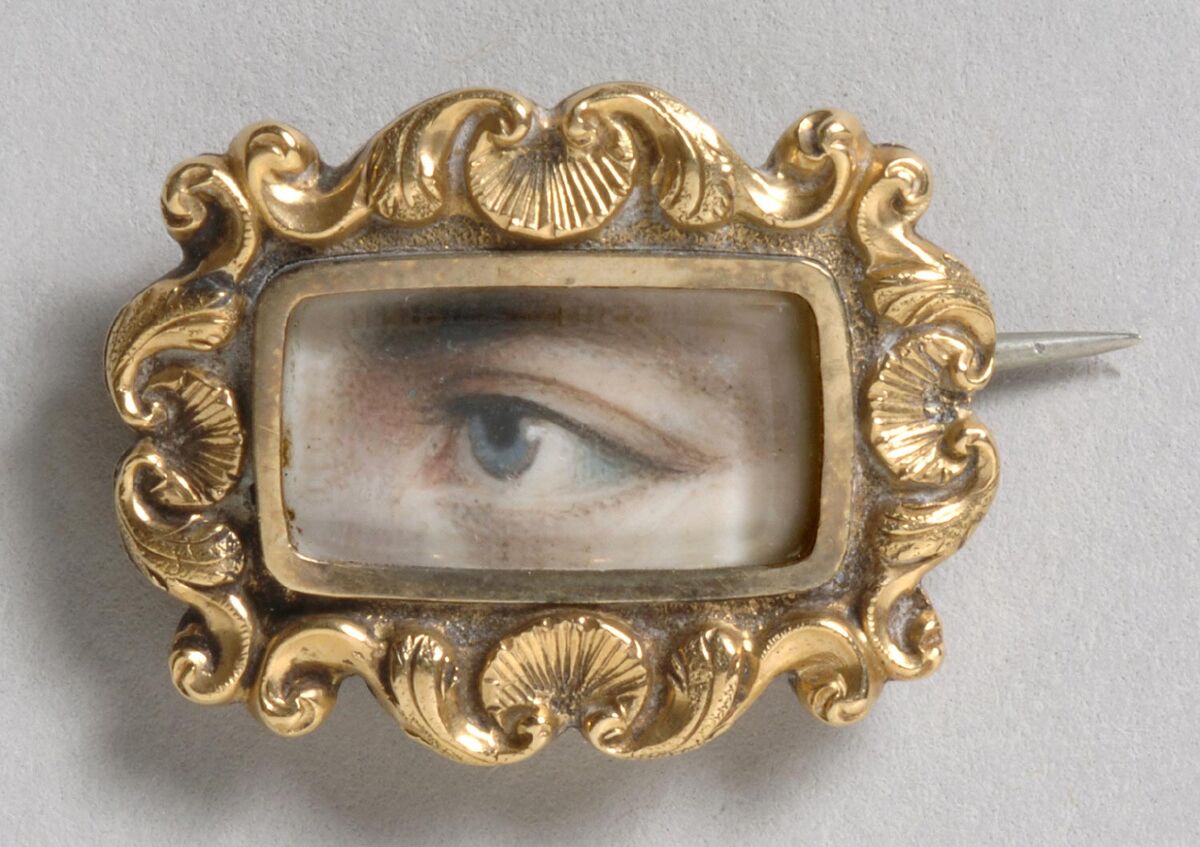 Portrait of a Left Eye. Courtesy of the Philadelphia Museum of Art.

In the process, looking became both significant and codified; in other words, different types of glances conveyed different emotions and messages.
Eye miniatures materialized in this environment, where even the subtlest glance could convey lust, love, surveillance, or a heady mix of all three. It’s no wonder, then, that an expression of devotion would come bearing a gazing eye.
Each miniature feels precious and exceedingly intimate, though their moods oscillate from adoring, longing, and lusty to penetrating and eerily watchful. One looks bashfully from the center of a circular pin, resembling a peephole, as if hinting at his or her more lascivious desires, while another gazes, heavy-lidded and adoring, through a sparkling wreath of gems. Others express darker, more melancholy messages: From one ornate golden setting, a man stares controllingly, brow arched, as if attempting to dissuade infidelity; he is watching the woman who carried this jewel, even in his absence. A pearl-rimmed eye secreting two diamond tears, on the other hand, likely represented a deceased loved one; through it, the subject’s glance remained immortal, even in death. 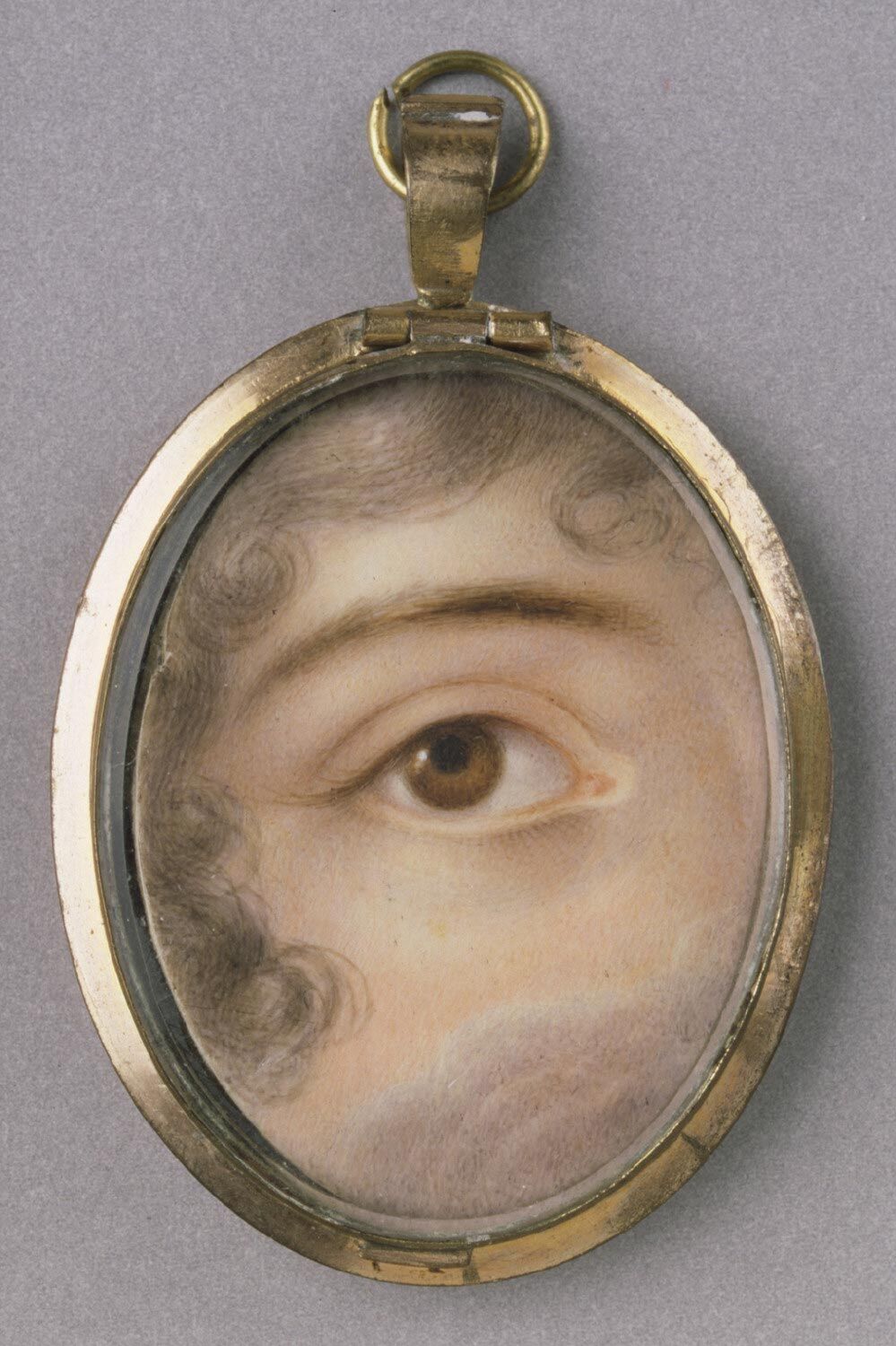 Portrait of a Woman's Right Eye. Courtesy of the Philadelphia Museum of Art.

Portrait of a Right Eye. Courtesy of the Philadelphia Museum of Art.

In part, it’s the intimate nature of eye miniatures that Grootenboer credits with the mystery surrounding them. The gaze communicated by each painted eye, and therefore the object itself, “was only important to the lover or to the person that was intimate with the portrayed,” explained Grootenboer. As their subjects and owners left this world, the significance of each jewel faded, too.
What’s more, by 1830, the trend itself petered out. Photography had emerged, promptly snuffing out any interest in miniature portraiture “because it offered a real portrait,” Grootenboer said. From then on, production of lover’s eyes all but stopped, and the names of their subjects, owners, and the love stories that inspired them were largely forgotten.
Yet even without their context, lover’s eyes retain their piercing gazes, their ability to hypnotize. “We feel this gaze resting upon us. We feel this connection with this subject that you have never met. You have the feeling that you know this person a little bit,” explained Grootenboer.
“In that way, they articulate the essence of portraiture: the act of looking at you, the ability of a painting to hold you in its grip.”
Alexxa Gotthardt
A previous version of this article misstated the title of Hanneke Grootenboer’s book as Treasuring the Gaze: Eye Miniature Portraits and the Intimacy of Vision. Its title is Treasuring the Gaze: Intimate Vision in Late Eighteenth-Century Eye Miniatures. The article has been updated to reflect this change.
Related Stories