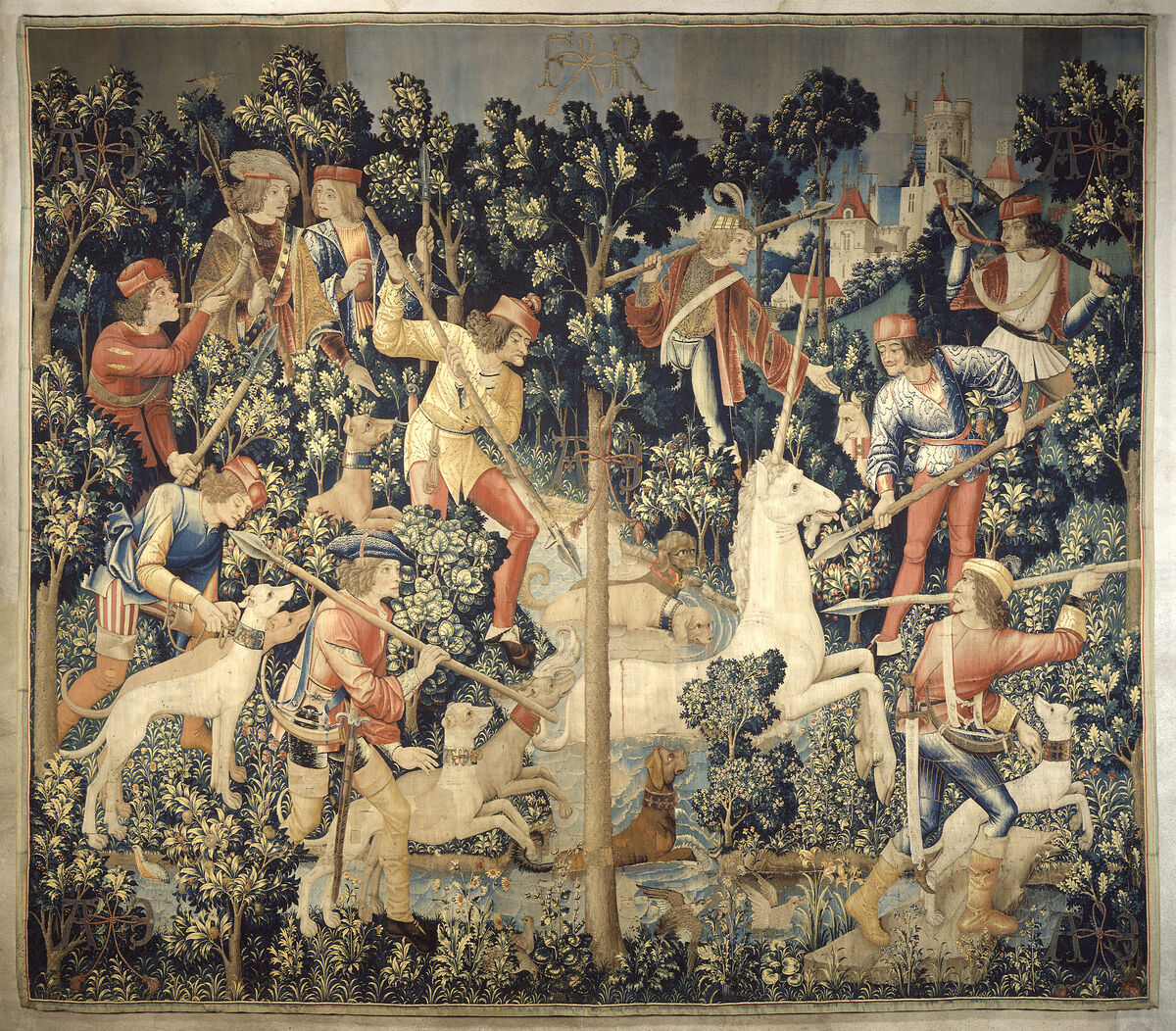 The Unicorn is Attacked (from the Unicorn Tapestries), 1495-1505. Gift of John D. Rockefeller Jr., 1937. Image courtesy of the Metropolitan Museum of Art.

The Unicorn Tapestries, traditionally known as “The Hunt of the Unicorn,” are widely considered to be among the greatest artworks in existence.
Comprised of seven monumental tapestries—each measuring 12 feet tall and up to 14 feet wide—they depict exquisitely dressed noblemen with a team of huntsmen and hounds who pursue a unicorn through a flowering forest. The creature is found, slain, carried to a castle, and, in the series’s famous final panel, resurrected, resting in a garden within a circular fence.
Marked by their depth of space and luminosity, the tapestries are woven from wool and silk thread, some of which is wrapped in silver or gold. (Locate any one of the mysterious “AE” ciphers, which appear on every hanging, and you’ll see the way it glitters.)
On permanent display at the Cloisters, the upper Manhattan home of the Met’s medieval art collection, the series is famously cryptic: Its origins and symbolism still baffle scholars. They have been examined, interpreted, and discussed for more than a century, resulting in no definitive conclusion.
Together, the tapestries incorporate familiar aspects of unicorn lore into a traditional medieval hunt. The animal is bearded with cloven hooves, a milk-white agent of spiritual or medicinal purity. Its horn can heal wounds and purify water: In one panel, The Unicorn is Found, the creature dips its appendage into a stream, making it safe for men and other animals to drink.
In another panel, The Mystic Capture of the Unicorn, it is tamed by a willing virgin, who leads the unicorn into an enclosed rose garden to meet its sacrificial fate. In this way, it appears both secular and religious—a duality common in the Middle Ages, when unicorns symbolized Christianity, immortality, wisdom, lovers, and marriage. 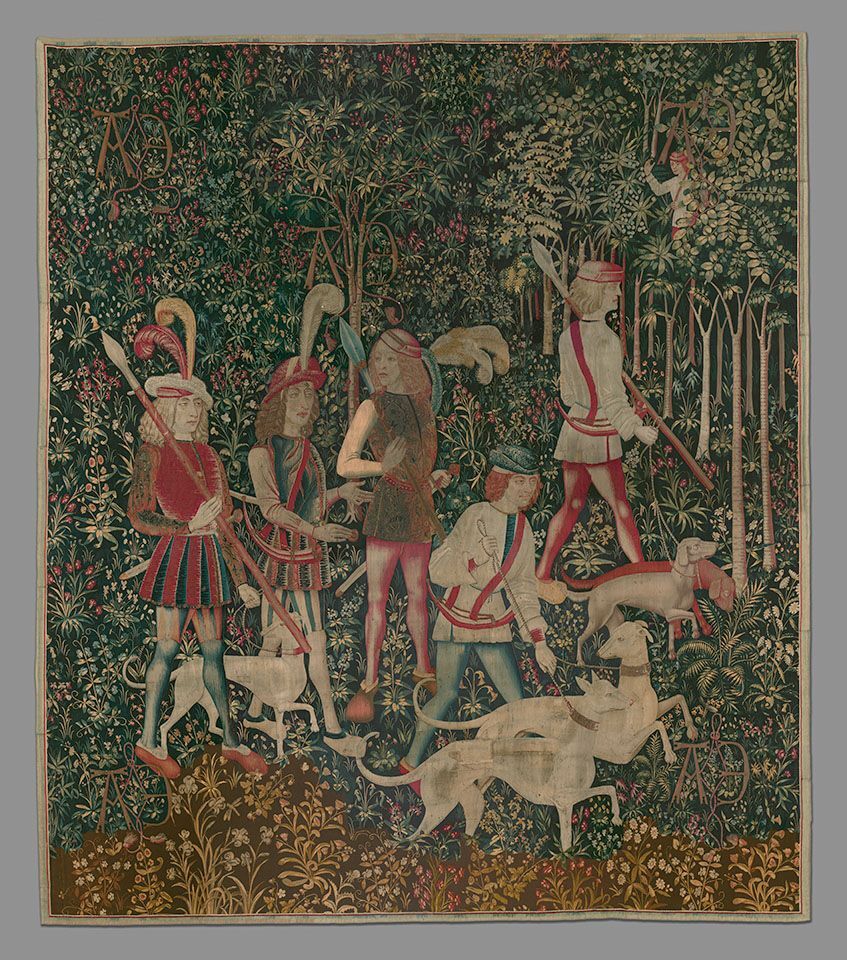 The Hunters Enter the Woods (from the Unicorn Tapestries), 1495 – 1505. Gift of John D. Rockefeller Jr., 1937. Image courtesy of the Metropolitan Museum of Art. 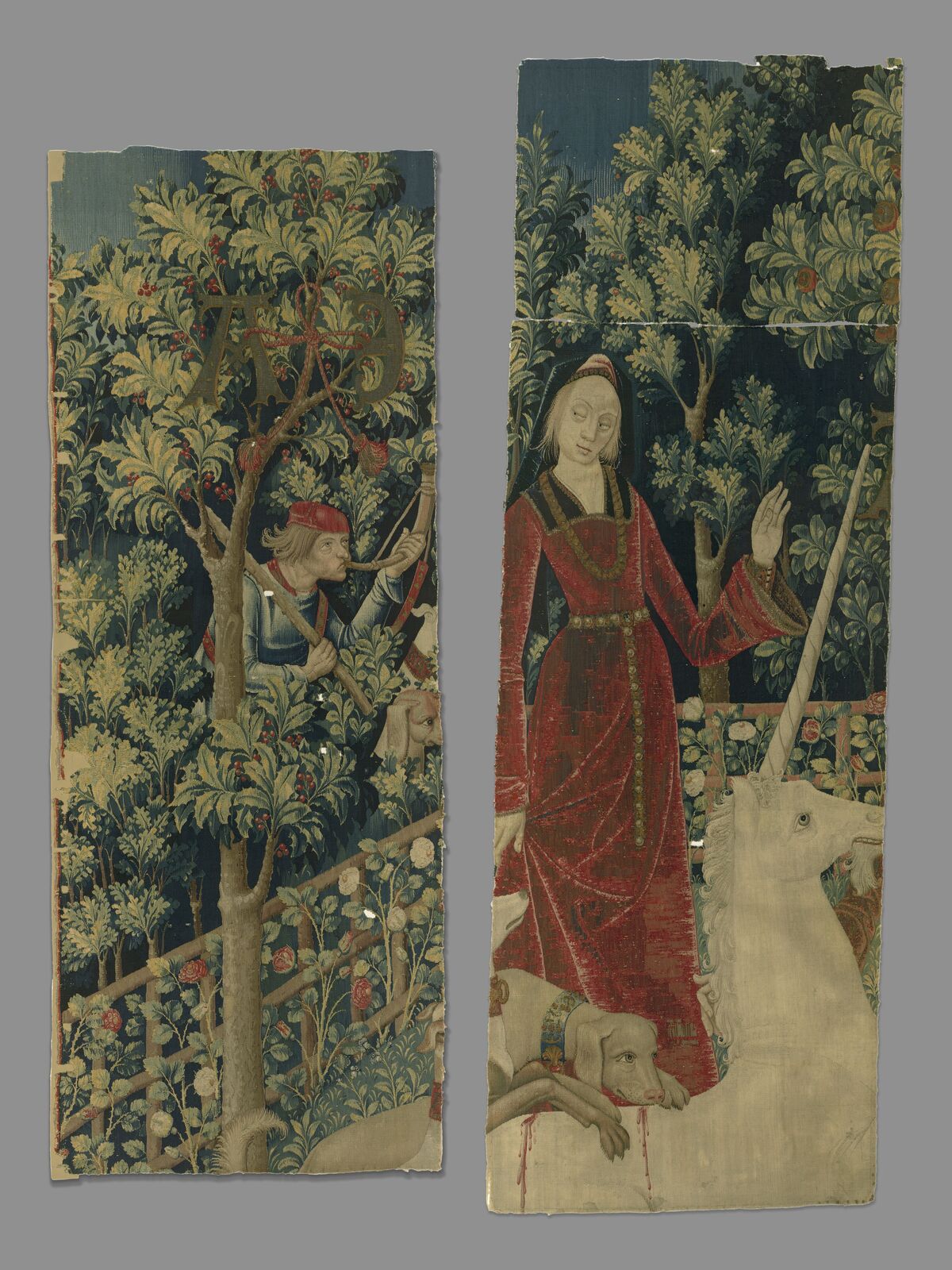 The Mystic Capture of the Unicorn (from the Unicorn Tapestries) Fragment A and Fragment B, 1495 – 1505. Gift of John D. Rockefeller Jr., 1937. Image courtesy of the Metropolitan Museum of Art.

There are a few generally agreed-upon elements of the tapestries’ history. They were probably made around 1495 to 1505, a period indicated by their compositions and dress of the people that appear in them. The characters’ poses, facial expressions, clothing, and hair resemble those of Parisian prints and miniature paintings from that time, leading historians to believe a French designer conceived the hangings and sent the designs to Brussels (which was then a major tapestry weaving center) to be made.
Chemical analysis has revealed the three dye plants used to create its still-vibrant thread colors: madder (red), woad (blue), and weld (yellow).
The earliest record of the tapestries is a 1680 inventory of possessions located in François VI de La Rochefoucauld’s castle in Paris. In the 1730s, the hangings were moved to the family’s Verteuil château, where they were looted during the French Revolution. The family re-acquired the tapestries in the 1850s—including a severely damaged one, left in fragments—and sent the six complete ones to New York for exhibition in 1922.
There, they were seen and bought by John D. Rockefeller, Jr., who kept them in his apartment until 1937, when he gave them to the Cloisters. The remaining pieces of the seventh tapestry were purchased separately from Count Gabriel de La Rochefoucauld of Paris; the complete series was reunited at the Cloisters’s opening in 1938.
Far outweighing the facts are countless unanswered questions, primarily concerned with the meaning behind the tapestries, the artist(s) who made them, and their patronage—alluded to by the recurring monogram made from the letters “A” and “E,” which appear to be tied together with a knotted cord. 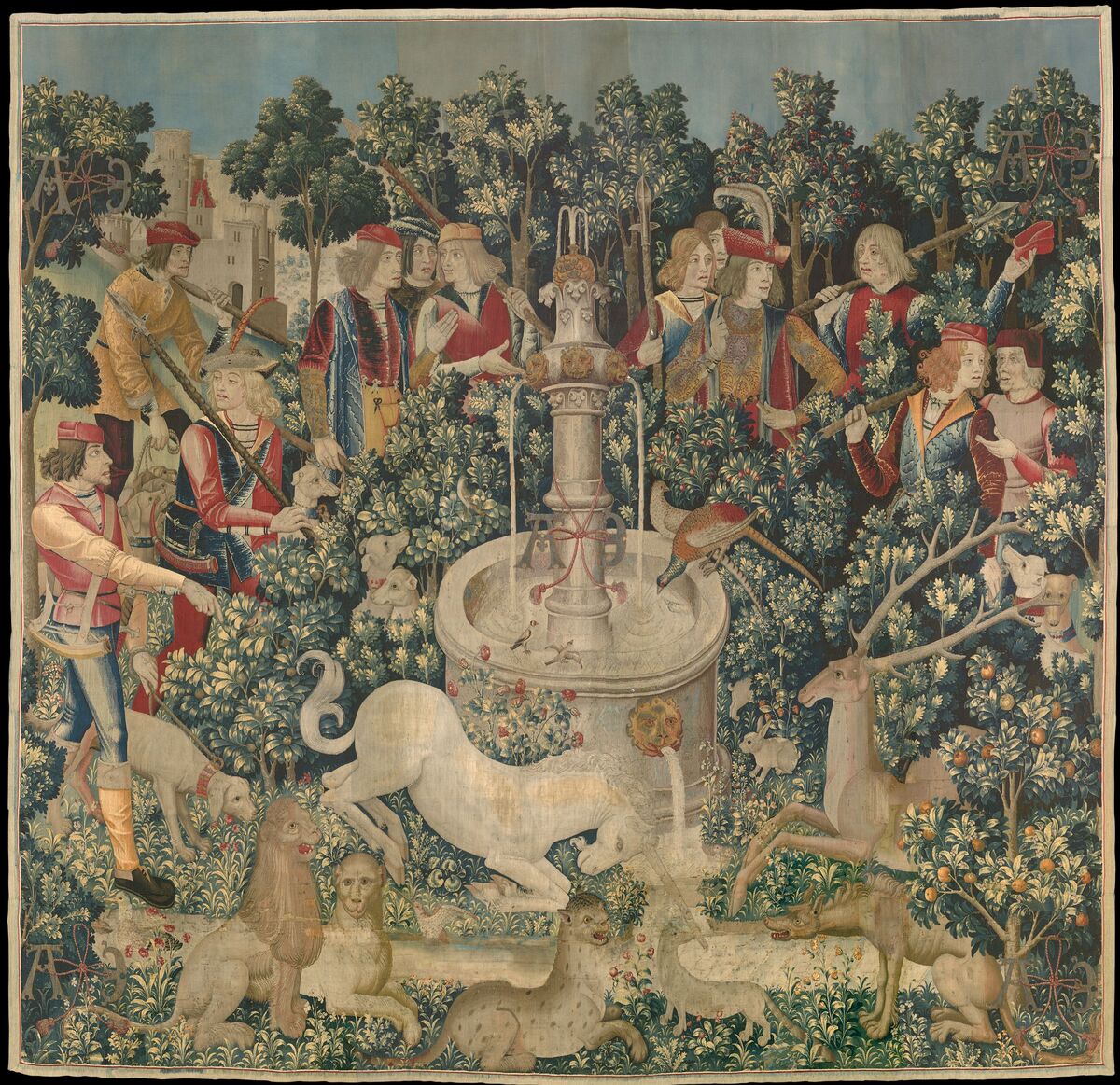 Advertisement
Nancy Wu, a museum educator who’s been at the Cloisters for two decades, finds the “AE” cipher most perplexing of all. Often appearing near a hanging’s center and at its four corners, the insignia also materializes on dog collars and in other discreet places in the works.
She told me there are three general theories about the mark, noting that initials in the Middle Ages were sometimes derived from the first and last letters of one name. Some believe it signifies Adam and Eve, while others have claimed it identifies Anne of Brittany, a major patron of the arts who was active around the late 15th century and who, in 1499, married King Louis XII of France—a fitting occasion for the tapestries to celebrate.
A more recent theory conjectures that the letters represent Antoinette of Ambroise, the wife of François de La Rochefoucauld’s second son, Antoine, who was born around 1475. Since the tapestries were undoubtedly at the de La Rochefoucauld castle in 1680, this theory is particularly tantalizing.
“One of the main questions people ask is how long it took to make them,” Wu says. “Each tapestry was probably stretched over one enormous loom. But there’s no way of answering without knowing how many people were on the loom, and how many looms were worked on at the same time.”
Tapestries are woven with colored thread called the weft, which is wrapped around long, strong threads called the warp. Medieval tapestry weavers, usually young men, worked side by side in teams, using small tools. They worked only by daylight, as candlelight might distort the thread colors. A skilled weaver might complete one square inch in an hour. Wu estimates that one tapestry could have taken months, if not a year or two, to complete.
The impeccable quality and technical achievement of the hangings suggest a prosperous patron commissioned a superior workshop for the project. “Tapestries were status symbols,” Wu says. “It was more expensive to purchase a tapestry than build a castle.”
She had the rare opportunity to see the flip-side of the hangings in the 1990s, when they were removed so that the gallery could be renovated. “The backs looked like the complete reverse of the front. You’d expect to see shaggy, cut-off threads, but these were unbelievably finished,” Wu remembers. The reverse also revealed some fading of the original colors: The now-dark forest, for example, was once a tender, early summer green. The Unicorn is Killed and Brought to the Castle (from the Unicorn Tapestries, 1495-1505. Gift of John D. Rockefeller Jr., 1937. Image courtesy of the Metropolitan Museum of Art. The Unicorn in Captivity (from the Unicorn Tapestries), 1495-1505. Gift of John D. Rockefeller Jr., 1937. Image courtesy of the Metropolitan Museum of Art.

Unpacking the tapestries’ densely populated symbolism is an entirely different beast. The plants alone are loaded with meaning, and there are some 101 species woven into the background, almost all of which have been identified.
Looking at the last, most iconic tapestry, The Unicorn in Captivity, provides ample food for thought. For Wu, the symbolism could be both secular and religious, with layered meanings that would have been understood by people in the Middle Ages. She points out the wound on the unicorn’s right side, the same place where Jesus was wounded on the cross.
(In the previous hanging, The Unicorn is Killed and Brought to the Castle, the creature has a wreath of oak, hawthorne, and holly around its neck, further suggesting its reference to Christ resurrected in the final tapestry, where the unicorn sits in a blooming garden resembling paradise.)
A secular interpretation of the hanging could see the gold chain tying the unicorn to a tree as a symbol of true love, as poets from the Middle Ages often used the chain to symbolize a lover’s devotion to his lady. If the tapestries were made to commemorate a marriage, the garden’s plants and trees echo this theme: The unicorn rests below a pomegranate tree, whose fruit, covered in seeds, was regarded as a symbol for fertility.
Seed-covered wild strawberries crop up around the animal’s tail, and its horn, centerstage, suggests a phallus.
Wu believes more concrete answers will eventually arise from the decades of research devoted to the tapestries. “The AE cipher is so prevalent—the artist couldn’t be more generous in trying to tell us something about the owner,” she says. “Our best hope is in archival work. It’s vexing, but it’s also intriguing to pursue the meaning behind this phenomenal work of art.”
Tiffany Jow
Related Stories 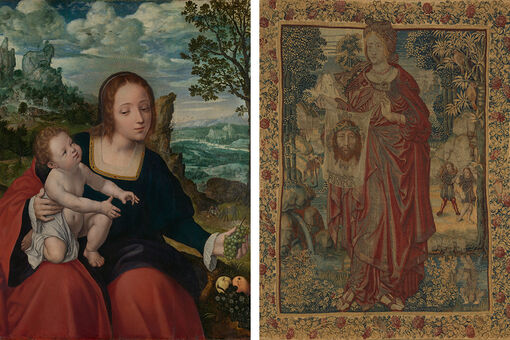 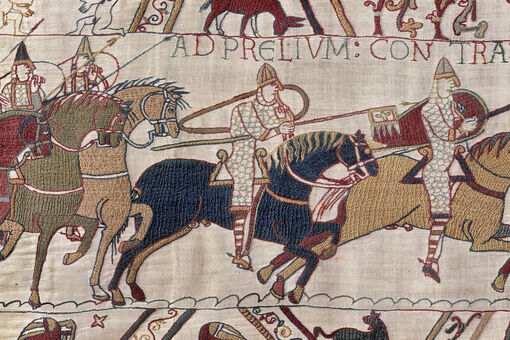 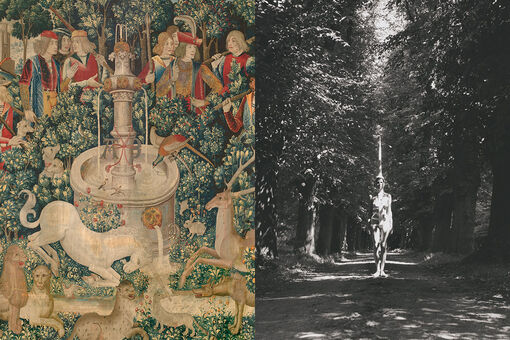