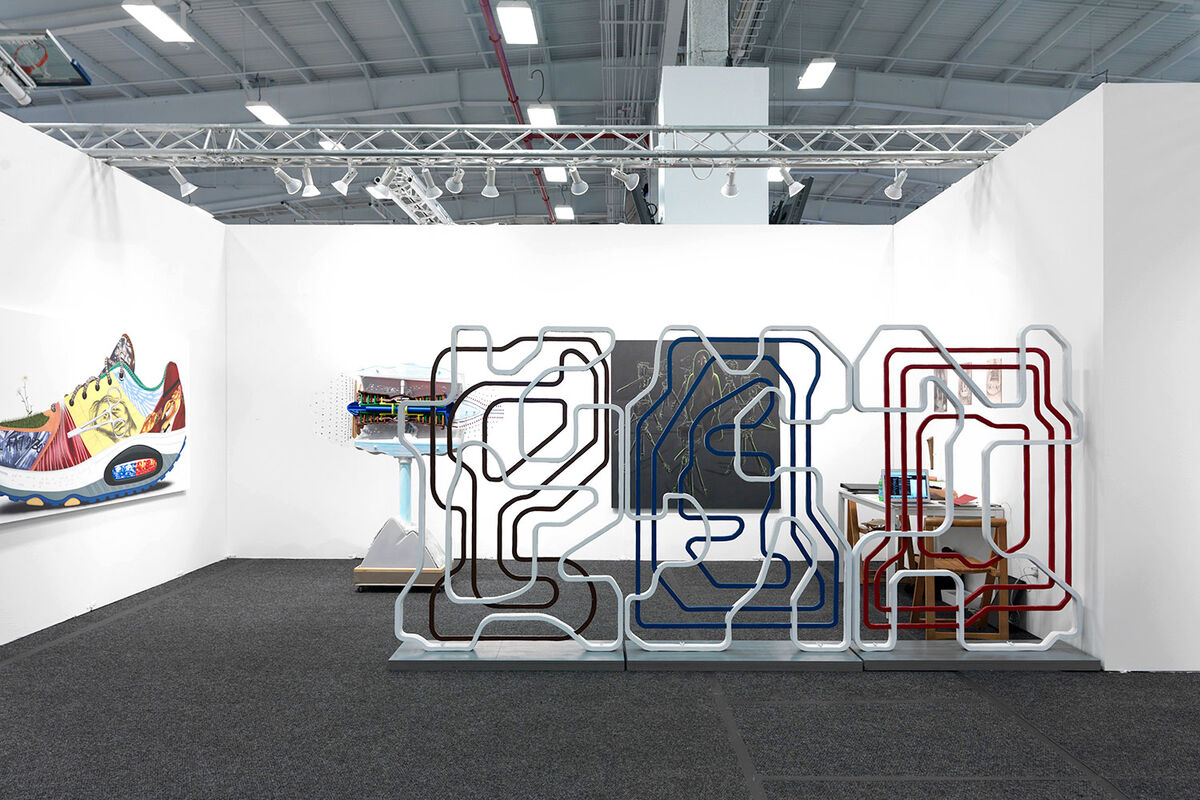 NADA (New Art Dealers Alliance) New York’s fifth edition kicked off on Thursday afternoon at Pier 36’s Basketball City with an energy that registered as markedly more buoyant than Frieze’s opener the day before. By 2 p.m., just two hours after NADA opened its doors, a handful of its 108 booths were already reporting vigorous sales. At the fair, which hosts primarily emerging artists and galleries, prices start at $500 or less and top out at around $25,000, with some more expensive outliers. It’s this accessible range, at a time when the market feels somewhat wobbly, which was drawing art-seekers of all sorts, from high-rollers to fledgling buyers to artists on the hunt for inspiration (or just in the mood to hang out in the presence of their friends’ paintings).
A short stroll from the fair’s entrance, a group gathered around London’s KINMAN Gallery, chatting with its featured artist, the New York-based
Peter Sutherland
. Sutherland sat on a bench of his own creation, with a back that doubles as a silhouette of the Swiss Alps, priced at $12,000. “I’m interested in the clash between man and nature, between high and low,” Sutherland said when asked about the seat, which riffs on suburban bus benches shaped like of the objects they advertise (think silhouettes of cars endorsing dealerships). Photographs that line the walls and floor of the booth address the same man-versus-nature quandary. By 3 p.m., one mesmerizing piece—an image of graffiti-swathed rocks printed on lustrous anodized aluminium and priced at $5,000—was on reserve, according to gallery owner Henry Kinman. 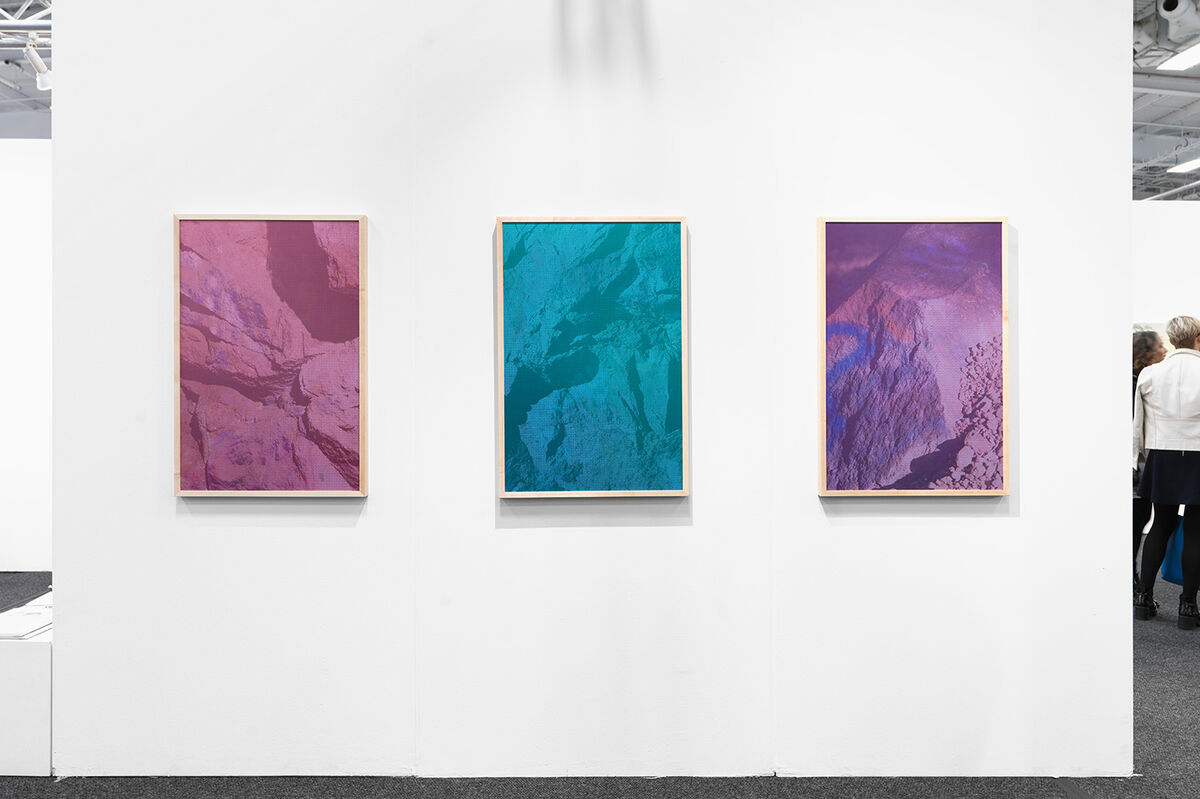 Across the way, another standout solo booth was drawing crowds—and opening wallets. Guatemala City’s Proyectos Ultravioleta, helmed by energetic cofounder Stefan Benchoam, was strung up with playful, candy-colored paintings by the Japanese, New York-based artist
Akira Ikezoe
. Featuring a taxonomy of neatly arranged objects—cords next to snakes, LEDs with lightning bugs—they also probe man’s relationship with the natural world. The booth’s standout piece, filled with naked figures bearing coconuts for heads and interacting comically with laptops and the leaning tower of Pisa, sold within moments of the fair’s opening for $10,000. The remainder of the eight or so works in the booth were spoken for not long after.
Farther into the fair, two other booths—hung with big, moth-to-a-flame figurative paintings—had all but sold out by mid-afternoon. After a bevy of sales, Tomorrow gallery’s cohort of Sojourner Truth Parsons’s canvases, priced between $6,000 and $8,000 each, were already being swapped out for fresh works. Not far off at London’s Edel Assanti, three of Dale Lewis’s massive pieces, each one 13 feet wide and selling for £8,000, had found buyers, despite their somewhat challenging subject matter: drug-addled, hard-drinking libertines and addicts falling out of their clothes and swilling mind-bending beverages. “It’s difficult material, but because he frames it in these art-historical tropes, like the reclining nude or religious dinner scenes, there’s a familiarity to them,” explained the gallery’s Jeremy Epstein, “and the humor diffuses a lot of the toughness of what’s going on.” 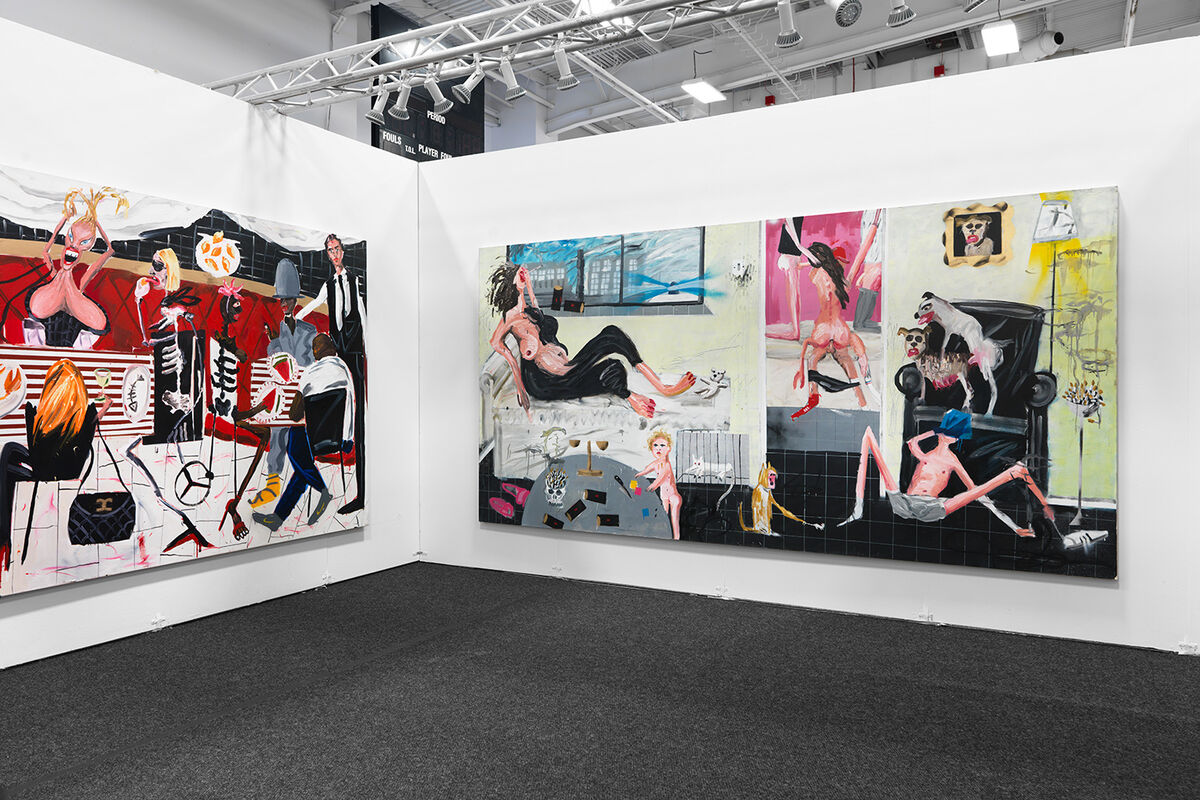 Advertisement
NADA has become a site of experimentation for many young gallerists, who use the it as an opportunity to debut more challenging pieces. Edel Assanti, for instance, is announcing their six-month-new relationship with Lewis to the fair’s more international audience. Across the pier, NADA veteran 247365 shows Los Angeles-based Benjamin Reiss’s delightfully outlandish sculptures for the first time. The artist, who is also an exhibition designer at the Natural History Museum of Los Angeles, combines elements from machinery, cartoons, and creation myths into single, intricate objects that resemble Rube Goldberg machines or some friendly, futuristic transformer. The booth’s magnum opus is his towering Jet (2016), priced at $10,000.
Sculpture, even with accessible price tags, remained a slightly more difficult sell than painting in the fair’s opening hours. Over at REGINA REX, several of
Dave Hardy
’s excellent foam and cement sculptures (priced between $4,000 and $8,000) were on hold, but no sales had been confirmed by late afternoon. On the other hand, across the hall at Frankfurt’s Bischoff Projects,
Ben Thorp Brown
’s cheeky sculpture of 3D-printed sculpture of an oyster (the crown jewel of a series that imagines a future, water-starved world in which oysters are as rare and costly as diamonds) had sold for $2,500 by end of day. 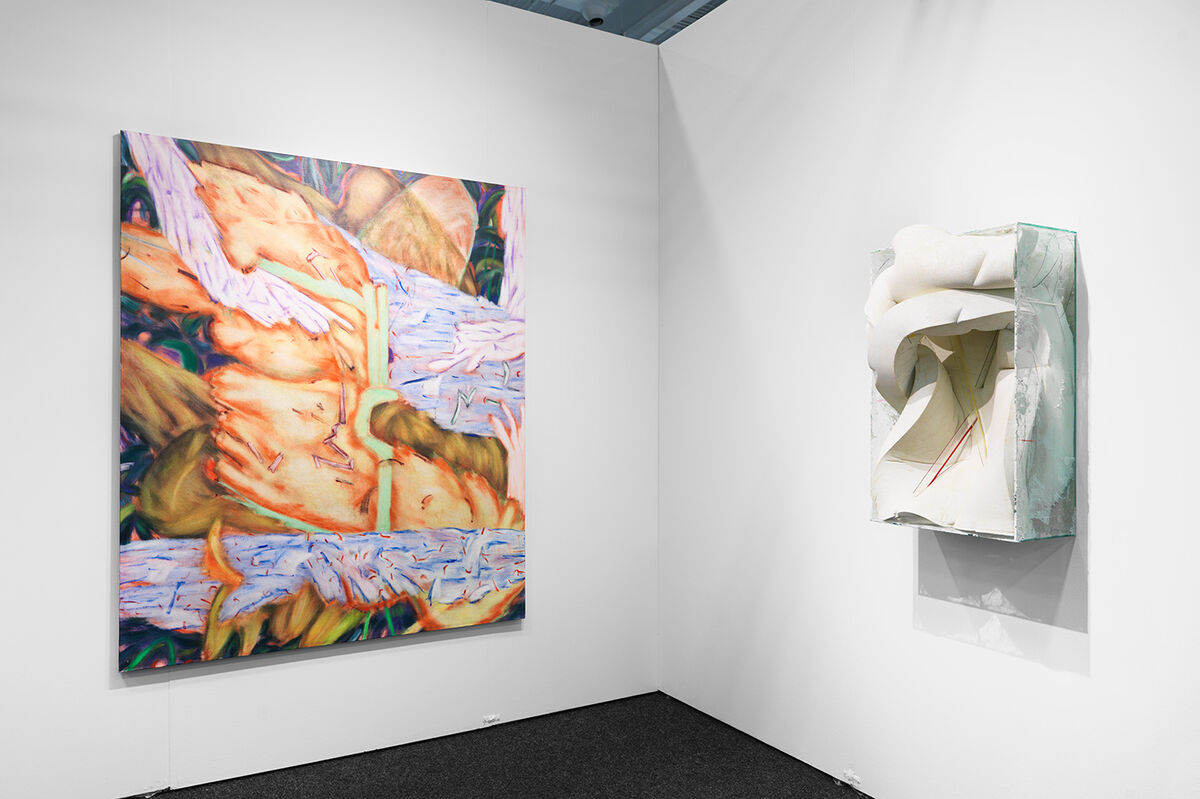 And by 4 p.m., London’s Space In Between had sold several of São Paulo-based artist
Lucas Simões
’s hard-edged concrete-and-paper sculptures for between $3,500 and $8,300. At the center of the booth sat a table covered in plaster objects and their residual dust that were meant to be played with—and notably weren’t for sale. They were inspired by the fetishization of sculptures by Simões’s hero, the late Brazilian artist
Lygia Clark
, whose interactive objects lost their original purpose (to be fiddled with, touched) in the tornado of the posthumous market frenzy for her work.
As the fair’s first day came to a close, several visitors could be seen strumming big felt squares decked with piano strings and plugged into amps at the booth of Miami gallery Spinello Projects. The brainchild of artist
Naama Tsabar
, the pieces induce the giddy, guilty sensations that touching art still inspires. The largest of the bunch, a deep maroon arc that protrudes from the wall and plays a seductively deep tone, had sold earlier that day. On Friday at 1 p.m., the artist herself is slated to perform with the artwork-instrument hybrids. It’s an ephemeral, unsaleable act that also might double as a siren call for more daring collectors, who can scoop up a playable piece of art, with a Guggenheim pedigree (an older version of the project was shown at the New York museum in 2014), for a cool $15,000. 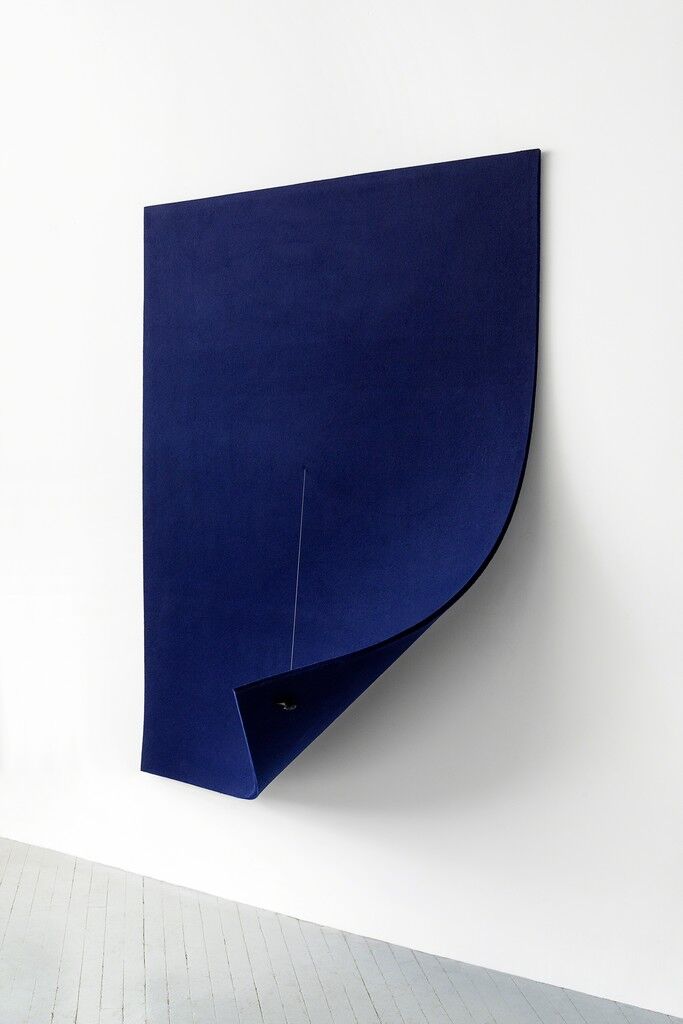 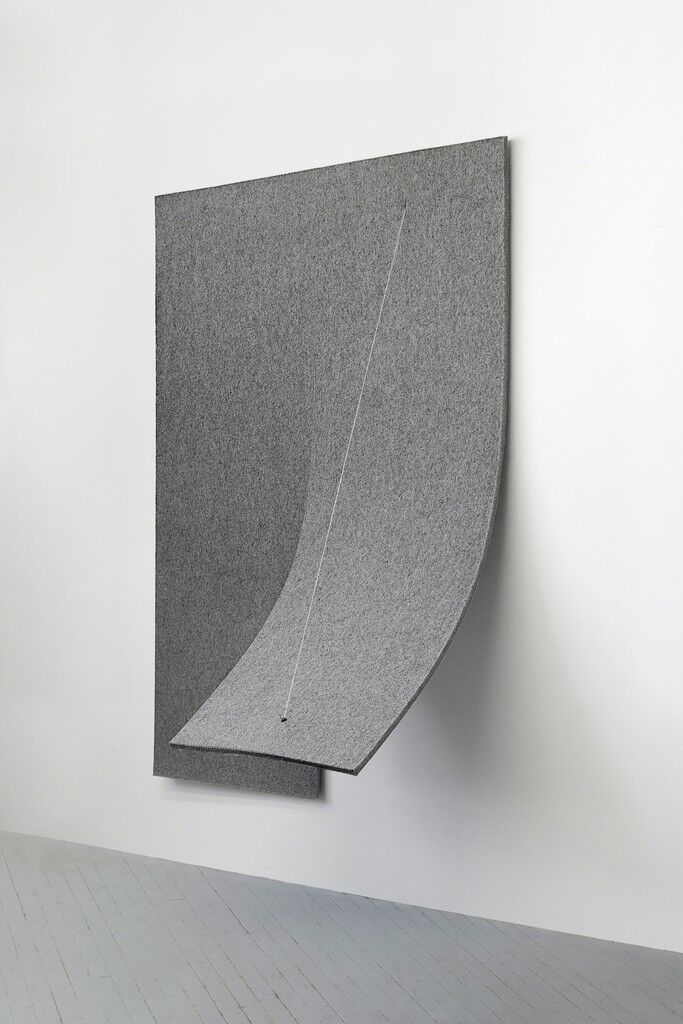 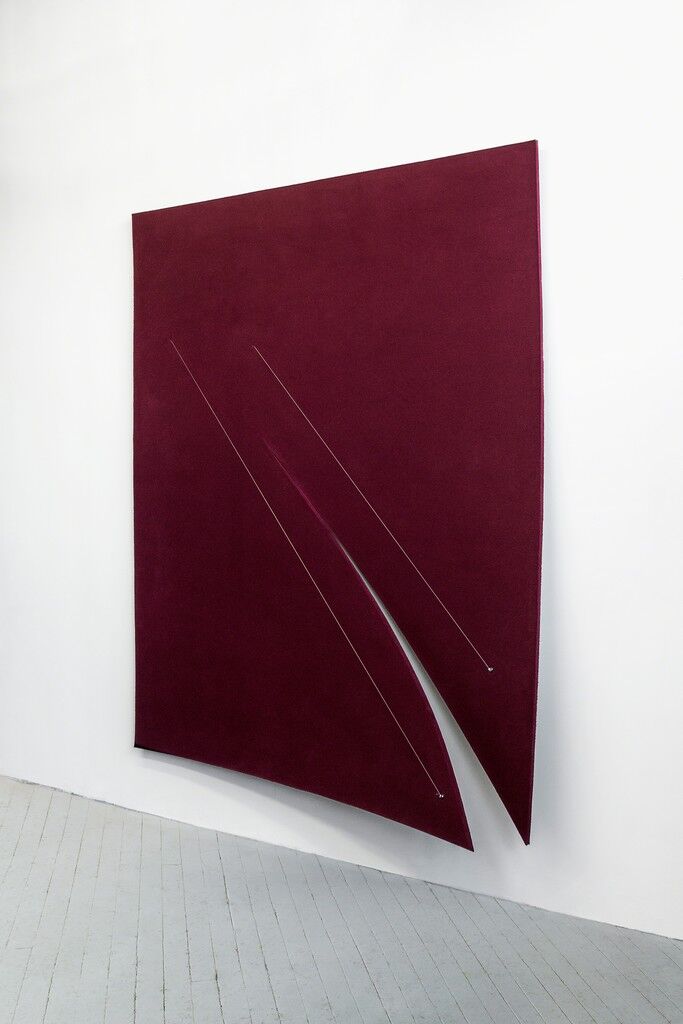