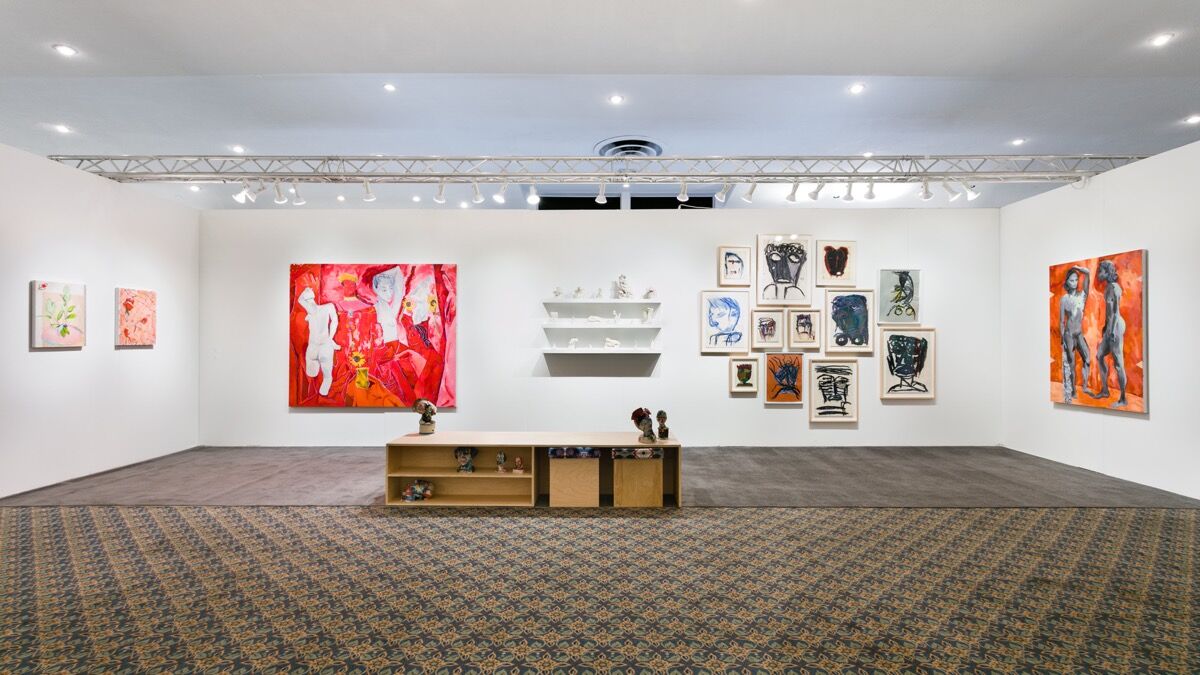 The 14th edition of NADA opened its doors on Thursday morning with buoyant energy and significant sales, gathering 110 galleries from 17 countries. As is tradition for the emerging art fair—a perennial foil to Art Basel in Miami Beach’s more formal atmosphere—the ambiance felt communal, even familial as the day kicked off. Dealers, collectors, and artists filing into the halls of the Deauville Beach Resort could be overheard discussing the power of art and coming together in moments of political and social turmoil, the likes of which we’ve seen of late. Indeed, never before has NADA’s warm environment been more welcome. And that atmosphere encouraged interest in a strong, wide-ranging selection of work—from sought-after figurative paintings by
Alex Chaves
and
Mira Dancy
, to a politically pointed installation from
Terence Koh
, to the spellbinding works of self-taught artists Derrick Alexis Coard and Karen May, which could be taken home for a little as $200.
Just an hour after the fair kicked off, the owner and director of Martos Gallery rubbed elbows with exhibiting artists Alex Chaves and
JPW3
, along with a throng of collectors. By that point, all four of Chaves’s paintings in the booth—which ranged from $5,000 to $14,000—had sold or were on hold. And while the young, Los Angeles-based artist’s canvases could certainly be considered part of the thriving figuration trend, they’re also loaded with weighty social and art historical content.
“His work really responds to his community,” said the gallery’s Ebony Haynes, as she looked at the booth’s centerpiece, a painting brimming with fractured figures—several nudes, a prince, and a classical bust. She went on to explain that the piece fused likenesses of Chaves’s friends with his interest in the late downtown New York artist
Dan Asher
’s work, which also hung in booth. “They both approach portraiture almost anthropologically, through close interaction with the people that surround them,” she continued. “And people really seem to be responding to that sense of human connection right now.” Asher’s series of loose, gestural portraits on paper, made with heavy scribbles, were a talk of the fair. Priced from $7,000 to $15,000, several had sold by the afternoon. 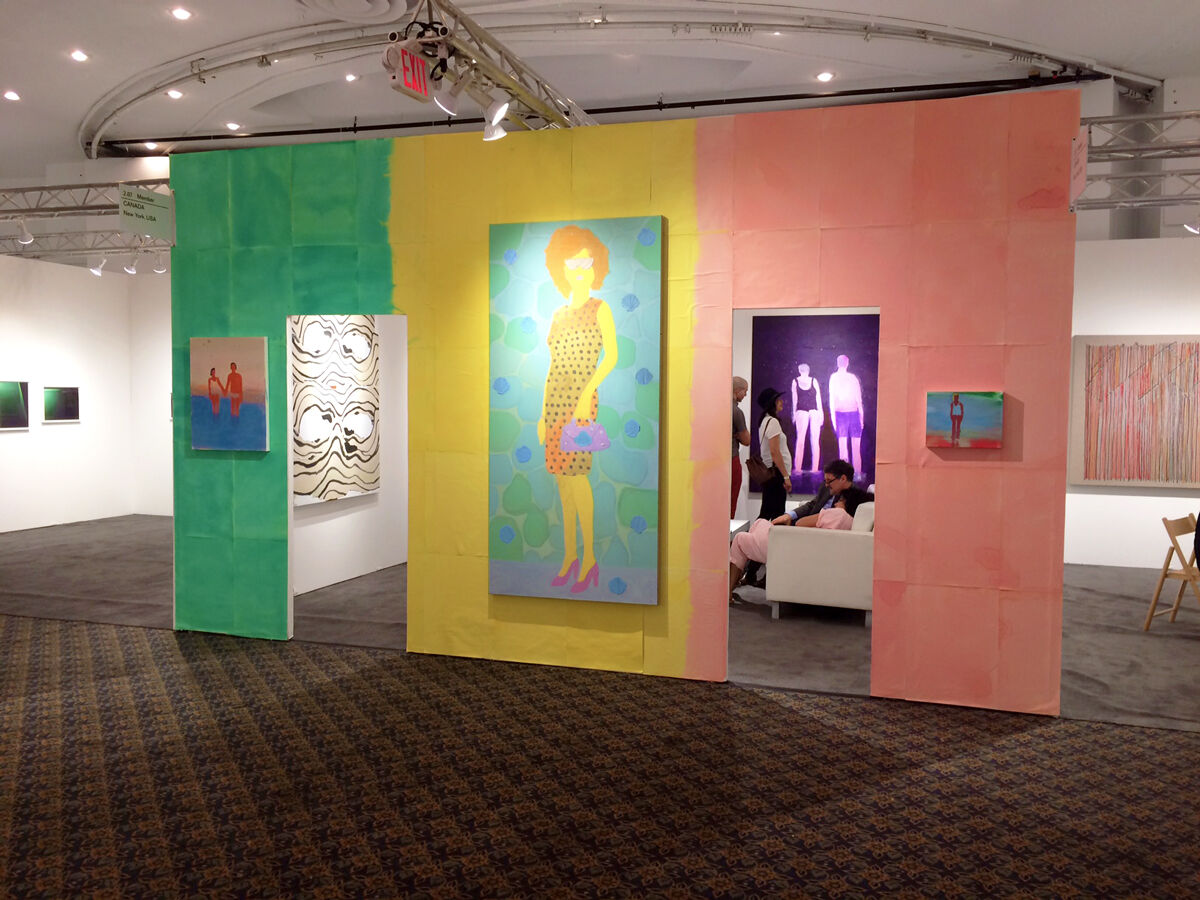 At White Columns, self-taught schizophrenic artist Derrick Alexis Coard’s portraits of floating black male faces echoed this theme of interconnectedness. As the pioneering nonprofit space’s director Matthew Higgs explained, Coard’s figures are amalgams of people he sees on the streets of New York, where he lives and works. Priced at $2,800 and $3,200, they were still available at 1 p.m., but drawing interest. The booth also hosted a series of drawings by Karen May, an artist who works out of California’s NIAD Art Center, which supports artists with disabilities. Her moving, at times humorous, pen and marker additions to Artforum ads were selling for just $200. Next door at the booth of Oakland nonprofit Creative Growth, one of the first and largest arts center for adults with disabilities, red dots were being affixed beside artworks across the booth. Two of Kim Clark's embroidered, pillow-like sculptures, which depicted the faces of her heroes David Bowie and Prince, were crowd favorites; priced at $250, both had sold by 11:30 a.m.
Down the hall, weighty figuration commanded attention at New York gallery CANADA’s installation as well. Poughkeepsie-based
Jason Fox
’s radical painting of President Obama pictured the soon-departing president as his dissenters might see him—smoking a cigar and decorated with a devil’s tail. The work was drawing a crowd and provoking conversation around Obama’s underrecognized accomplishments. But, priced at $14,000, it had not yet been sold by close of day, perhaps due to its raw, searingly relevant political content.
Katherine Bradford
’s gauzy canvases of faceless bathers wading in calm seas, on the other hand, had nearly sold out. They were priced between $4,500 for smaller works and $26,000 for very large ones. “There’s something existential about them, and they’re calming,” the gallery’s Adrianne Rubenstein said of their appeal. One collector stood, seemingly mesmerized, in front of Bradford’s largest painting in the booth, Night Swimmers, Maroon (2016), depicting two figures floating in deep purple, celestial space. 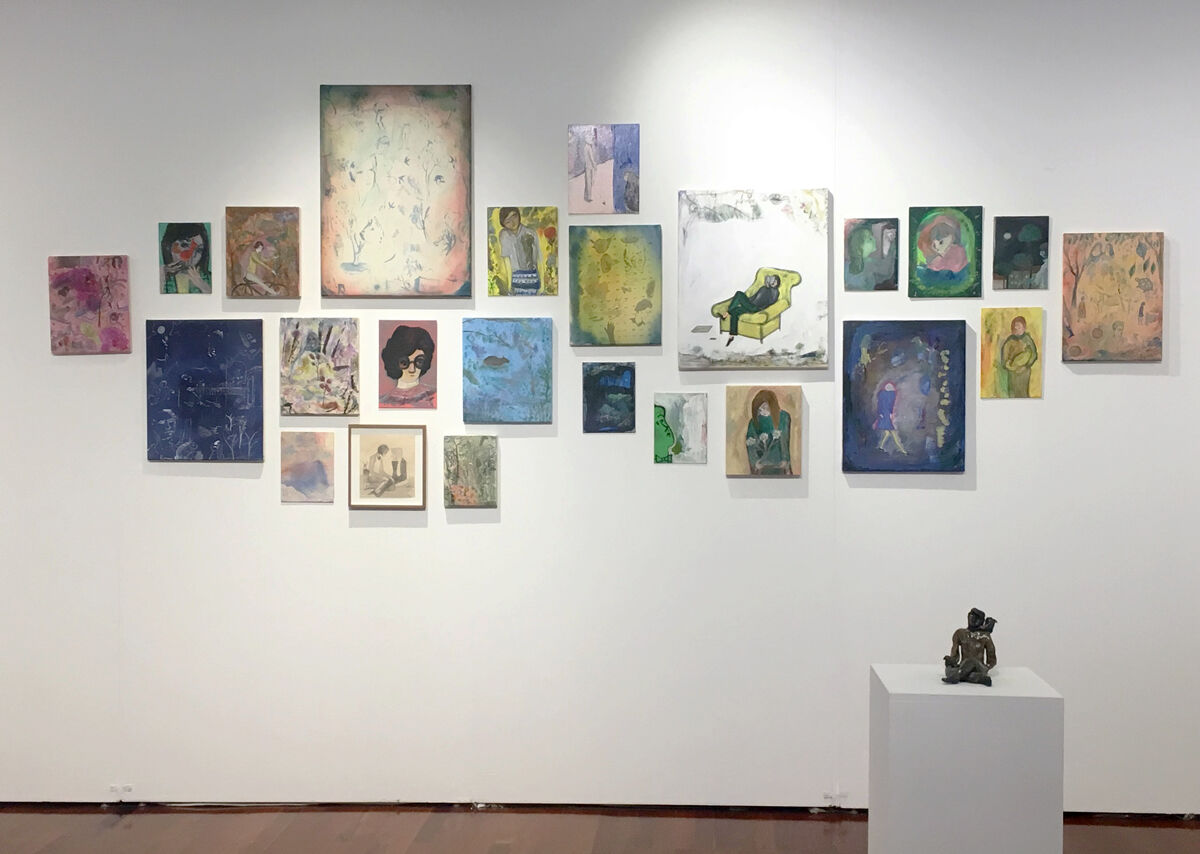 Advertisement
At Frankfurt-based Galerie Parisa Kind’s booth,
Isabelle Fein
’s small paintings of pensive subjects and whimsical forests, arranged salon-style on one wall, had a similar soothing effect on collectors. “Her work really opens people up, they can relate to these figures that are reflecting on the world,” the gallery’s Parisa Bouchet explained. Priced accessibly between 1,300 and 3,000 euros, a number of them had been scooped up by doting buyers by 2 p.m. “It seems that especially right now, when people are so full of fear, they want to be surrounded by reminders of the caring, positive qualities we have as humans,” Bouchet continued, looking at one of two palm-sized sculptures by Fein. One depicted a meditative, cross-legged figure with two birds perched on his body.
Night Gallery’s booth responded to the current political climate more overtly, with a particular focus on women’s rights. “There’s definitely a theme of spiritual female sacrifice running through the installation,” explained the gallery’s co-owner Davida Nemeroff. New York-based painter Mira Dancy, whose work was the talk of Miami Art Week last year, painted one work, Her Fever Fume (2016) during the heated aftermath of the election. It shows the faces of two angry, resolute women; scrawled above their heads is the word “HER.” The powerful painting, priced at $25,000, along with Dancy’s three-part neon, depicting female bodies that morph into flowers and flames, had already been sold, both works to the same collector. A striking photograph, priced at $6,000, by Los Angeles-based
Logan White
echoed the theme, picturing a woman covered in flames. 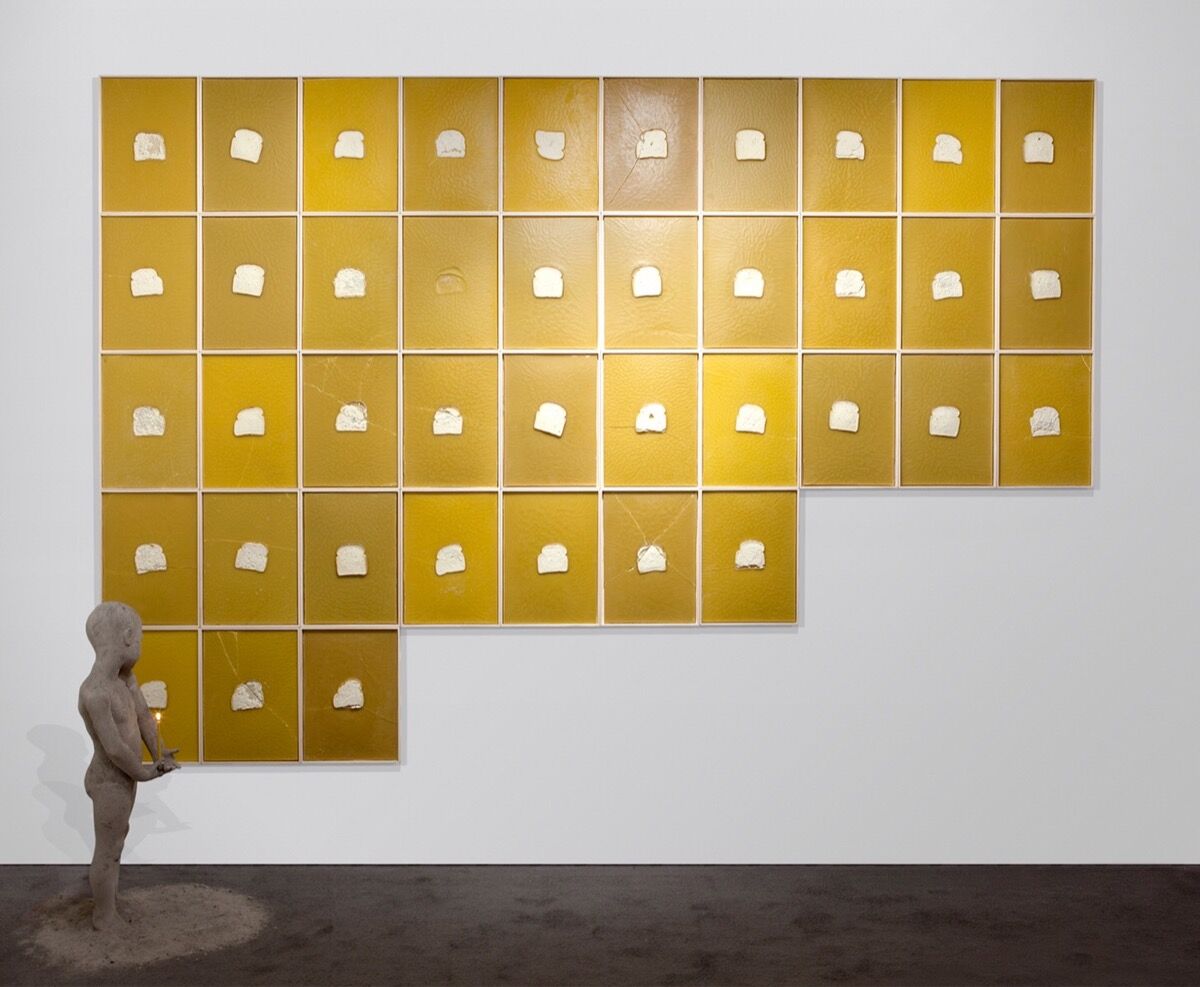 A number of other works, fresh out of the artists’ studios, also fiercely addressed the U.S.’s new political reality. Terence Koh covered a large wall of Moran Bondaroff’s booth with a work begun the day after the election. For the artist, slices of white bread embedded in 50 beeswax-filled panels represent the “whitelash” that Trump’s victory reflected. On the floor in front of the installation, a boy made from the ash of burnt newspapers symbolizes the harm Koh believes the new leadership will do to the country’s children.
“We’ve learned a lesson,” said the gallery’s co-owner Al Moran. “So now people are realizing that we need to get involved, make art, keep this conversation going, and commune.” Moran Bondaroff brought all of their exhibiting artists to Miami, including Koh, who was holding court in the booth. And while his installation hadn’t yet sold by end of day, NADA’s supportive, open climate seemed to promise steady sales for the type of art we need right now—work that soothes and pushes conversations forward.
Alexxa Gotthardt
Related Stories