Isaac Kaplan
May 27, 2016 12:21pm
On Tuesday, an emergency meeting was held at the Smithsonian’s National Museum of the American Indian (NMAI), where attendees—which included Native American leaders and U.S. government officials—called on French authorities to halt the imminent sale of sacred indigenous artifacts at Paris-based auction house Drouot. The attempt to stop the sale, slated for May 30th, constitutes yet another skirmish in a long-running conflict between Native Americans and French auctioneers.
Here’s what you need to know. 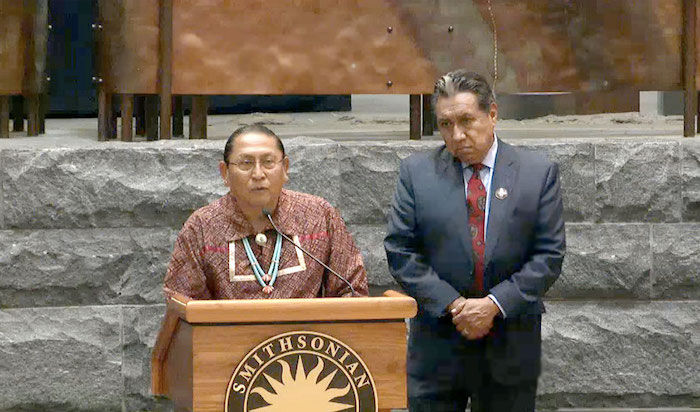 Organized by EVE (Estimations Ventes aux Enchères) and slated to occur at the Drouot auction house’s Richelieu location, the “Art Amerindien, Art Precolombien, Afrique et Oceanie” sale includes a number of artifacts sacred to Native Americans. According to Hyperallergic, indigenous leaders at Tuesday’s meeting in Washington, D.C., highlighted several examples of pieces that have spiritual and cultural importance—even codified by tribal laws preventing individual ownership or sale—including a Hoopa ceremonial deer, Hopi artifacts, and an Acoma Pueblo shield.
Native Americans contend that, far from being static objects fit for the wall of a collector’s home, several pieces in the auction are “created for ceremonies within our community; a spirit goes into them,” as Bradley Marshall of the Hoopa Valley tribe in California put it at the meeting. Reinforcing that “these objects are living beings,” Marshall compared the sale of such artifacts to slave auctions, according to the Guardian.
Some also question how these and other similar objects wound up in France. It is suspected that many of the pieces were stolen or abandoned when Native American groups were forcibly displaced from their homelands in the United States. Even if such artifacts were originally acquired through a formal transaction, indigenous groups like the Hopi have asserted that the objects could not legally have been sold given their religious significance and communal ownership, throwing further doubt on any potential provenance.
The American government, through a U.S. State Department official, has lent its support to Native American leaders calling for French authorities to “look beyond short-term profit” and stop the auction. Across the Atlantic, there are no signs that such words are being heeded, and it is doubtful anything can be done to compel the French auction house to stop the sale. While the American government is bound by international law to return antiquities to their countries of origin, there are no such reciprocal agreements in France.
The objects being sold are estimated to fetch tens of thousands of euros when auctioned on Monday. In a statement printed by multiple news outlets, EVE auctioneer Alain Leroy claimed the upcoming sale broke no laws, adding that “the public auction process allows the different tribes to acquire their past, and that is exactly what some tribes prefer to do, seeking efficiency and discretion.” Last year, Leroy infamously defended similar auctions to the AP, saying, “It’s legal. It’s business. What’s the problem?”

Sales Have a Questionable Legal and Historical Past

Beyond arguments like those advanced by Leroy, there are multiple reasons why French auctioneers continue to fly in the face of international criticism.  Along with simply being profitable for the auction houses (prior sales have netted over a million dollars), selling tribal artifacts in France has a long history, one tied to the nation’s past as a colonial power. The “Indianist” movement of the 1960s was also based in Paris and was fixated on indigenous history and cultures. Interest in tribal art in the country simmered until the 2000s when the collections of André Breton and Robert Lebel were auctioned off, with tribal works proving highly lucrative.
Sales of Native American pieces have been occurring in France for years. However, they only recently came to the attention of indigenous groups. In 2013, protests erupted outside Drouot in Paris ahead of an auction featuring objects sacred to the Hopi tribe. Subsequent legal attempts to prevent the sale of these pieces, known as “Katsinam,” or friends, have failed.
The sale of Katsinam would be illegal in the United States. But courts in France don’t recognize U.S. law on the matter and have no similar statute of their own to follow. “United States laws that provide some protection against the illicit sale of Indian artifacts in this country have no weight in foreign lands,” writes Tom Mashberg in the New York Times. “So tribes reaching overseas to recover objects that they view as culturally important are left to do battle on their own.”
In the French courtroom, success has been hard to come by. French auctions are regulated by an administrative body known as the Conseil des Ventes Volontaires (CVV). In 2014, representatives of the Hopi tribe along with the Holocaust Art Restitution Project (HARP) attempted to have an auction that included Katsinam suspended by the CVV. The body, which is an official arm of the French government, rejected the Hopi claims, saying the indigenous group had no standing to mount a legal challenge. The sale was allowed to proceed.
Some say that beyond permitting the sale, that ruling and the legal rationale that underpins it have dangerous and far-reaching consequences. Though the Hopi are a federally recognized tribe in the U.S., the CVV held that they are not recognized under French law. “If the Board holds that the Hopi Constitution is lacking in establishing its legal existence, then no Native American tribe will be able to bring cultural claims on French soil,” wrote attorney Pierre Ciric on artnetNews following the ruling.
Ciric also critiqued the standard by which the CVV had decided that the auction house had established good title on all the works to be auctioned: “The Board held that the auction house acted in good faith, although the auction house made only cursory requests to its consignor, and refused to force the auction house to perform any further due diligence.”
With legal avenues for restitution currently closed to Native American groups, the strategy now appears to be to marshal public and governmental pressure to halt such sales—no doubt, it will be a long road.
Isaac Kaplan is an Associate Editor at Artsy.
Related Stories