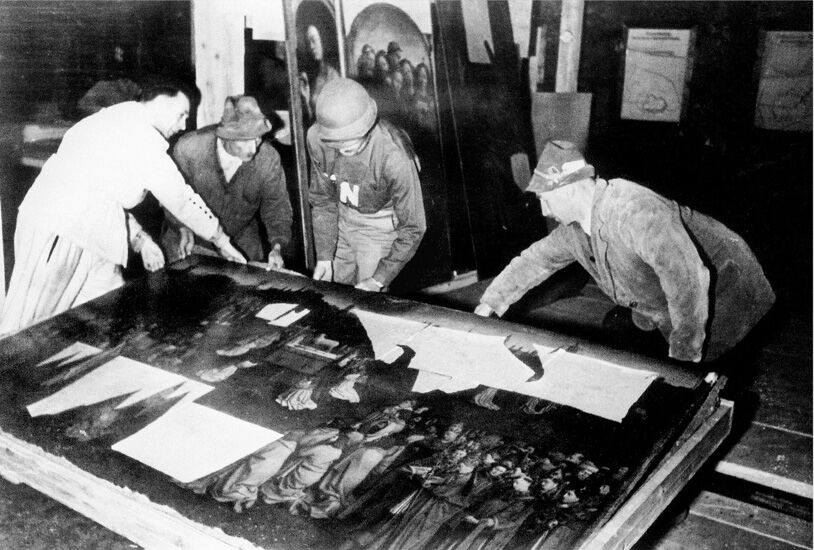 The Ghent Altarpiece recovered from the Altaussee salt mine at the end of World War II. Photo via Wikimedia Commons.

When the Monuments Men departed from Germany in 1949, they left some 10,600 Nazi-looted artworks behind in the care of the Bavarian government. State officials were tasked with returning these remaining pieces to the Jewish families who first owned them. However, as an investigation by London’s Commission for Looted Art in Europe (CLAE) published in the Süddeutsche Zeitung has revealed, these works not only failed to find their original owners, but ended up instead in the collections of several prominent members of the Nazi party. Here’s what this discovery says about the state of the restitution process, both in Germany and across the globe:

The Story of the Holländische Platzbild

These revelations grew out of CLAE’s research into the provenance of a particular painting—Holländische Platzbild (Picture of a Dutch Square), a piece inspired by a work of the same name by Dutch artist
Jan van der Heyden
, which hangs in the Louvre. First owned by the Jewish Kraus family, the painting was seized by Nazi officials when the family fled Vienna in 1938. The painting was purchased by Heinrich Hoffmann, Hitler’s personal photographer and remained in his possession until it, along with thousands of other Nazi-looted works, was reclaimed by the Monuments Men after the war ended. Upon the Monuments Men’s departure, Holländische Platzbild was handed over to the Bavarian government, whose state museum subsequently sold it back to Hoffmann’s daughter, Henriette von Schirach. (She was previously married to Baldur von Schirach, a leader of the Reich Youth who went on to be the Reich governor of Vienna.) And she promptly turned a profit, selling the painting at the Lempertz auction house to the Xanten cathedral, where it still resides.
Further investigation revealed that this work was only the tip of the iceberg. Von Schirach had managed to buy back most of her family’s art collection, as well as furniture and carpets, from the officials previously instructed by the Monuments Men to continue their search for the rightful heirs of the stolen artworks. And according to the report, she was hardly alone—a number of other high-ranking Nazi families were able to purchase looted artworks while more works still remain in museum collections.

“A Network of Old Friends”

As the investigation details, the government officials responsible for returning the looted work were, in fact, a series of men with ties to the Nazi party. The Bavarian state secretary transferred the authority to distribute the art to the director of the Bavarian Staatsgemäldesammlung (or State Paintings Collections), Eberhard Hanfstaengl, a cousin of Hitler’s secretary of foreign affairs Ernst Hanfstaengl.
Later, Ernst Buchner—the curator of the Bavarian State Paintings Collections between 1932 and 1945—took the reins. This went against the express orders of the Monuments Men, who said to “deny him any position in any art collection point in Germany at any point.” Buchner staffed his department with men of similar Nazi-era backgrounds, and the Bavarian art world became, as the Süddeutsche Zeitung put it, “a network of old friends.”
According to the CLAE, the Bormanns, Görings, von Schirachs, Franks, and Streichers—all former high-ranking Nazi families—successfully negotiated for the return of looted art they had obtained at the peak of the Reich, often directly with state officials. Jewish families, on the other hand, struggled against “impossible hurdles” that kept them from recovering their property.

Will the Work Be Returned?

So far, the Xanten cathedral has displayed no intention to return the Holländische Platzbild—and, legally, there is little recourse for the Kraus descendants. There is a 30-year statute of limitations for stolen property in Germany, meaning that former owners cannot fight for a return of their property in court more than three decades after it was taken from them. For any art that was stolen during World War II, the window of opportunity for legal restitution by these more straightforward means closed in 1975. There have been several attempts to change this law. These garnered increased support following revelations in 2013 that a cache of nearly 1,500 Nazi-looted artworks had been confiscated a year earlier from the Munich apartment of Cornelius Gurlitt, the son of an art dealer who worked for the Nazi regime. However, all proposed bills have failed to pass thus far.
And while 44 countries signed the Washington Conference Principles on Nazi-Confiscated Art in 1998—principles meant to formalize the restitution of Nazi-looted art—the process remains arduous and non-transparent. The Washington Principles are non-binding, instead suggesting best practices that nations should adopt or develop. And there is no international body to enforce the principles or settle restitution disputes. Incidentally, each of the 44 countries uses a distinct set of laws around Nazi-looted art, inspired by the principles, and can also choose which among the principles it wishes to adopt laws around. Only five signatories—Austria, Britain, France, Germany, and the Netherlands—have independent national commissions to deal with restitution claims. And while Austria swiftly adopted a policy aimed at purging its public collections of works looted by the Nazi regime, only select German institutions have even begun comprehensive provenance reviews of their collections.

Many thought the Gurlitt hoard would serve as the tipping point that would change the way Nazi-looted art is handled in Germany. But little appears to have changed since 2014. “What’s shocking is that this is not five years after the war, it’s 75 years after the war and 18 years after the Washington Principles were signed off on,” said Christopher Marinello, CEO and founder of the Art Recovery Group, on the phone from London. “What we have is a reluctance to comply with that agreement and to deal with Nazi looting. It’s unfortunate in its complete lack of transparency.”
The scale of the issue in Germany is no small contributing factor. Even in the very center of public attention, provenance research into the Gurlitt hoard remains ongoing, over four years after its discovery. Other investigations into museum collection provenance could take centuries at their current rate. But, as many restitution advocates argue, the moral obligation to undertake swift and comprehensive investigations should not fall victim to logistical limitations.
According to Marinello, the continued pileup of cases like these latest revelations from the CLAE only serve to promote the idea that there are forces actively working against the successful execution of the Washington Principles. “Stories like this latest one out of Bavaria are not even simply a lack of transparency,” Marinello told Artsy. “It appears really unseemly to me.” The lawyer, who has been responsible for some of the most high-profile restitutions of recent years, including a
Matisse
from the Gurlitt hoard, said that this is just the latest case among many in recent years, which have seen Nazi-looted artworks remain out of the grasp of their rightful heirs. Dealers and auction houses have routinely returned suspicious works to their consignors rather than invoke the Principles’ right for a “just and fair” agreement to be reached between current owners and rightful heirs, according to Marinello. “It’s as if they’re waiting for another generation to pass,” he said.
And while such instances of private interest outweighing moral obligation are troubling, perhaps more unsettling yet are instances like the circumstances surrounding Holländische Platzbild where governments could likely have previously intervened to right past wrongs. “In my work, I am constantly uncovering inconvenient truths. It’s very rare that people or governments come out and say, ‘You know what, we found this and we’re going to address it.’ It’s us pointing fingers at them and calling them out,” said Marinello. One might suspect that if revelations like the CLAE’s and the Gurlitt hoard can’t turn that tide, very little will.
Abigail Cain
Related Stories