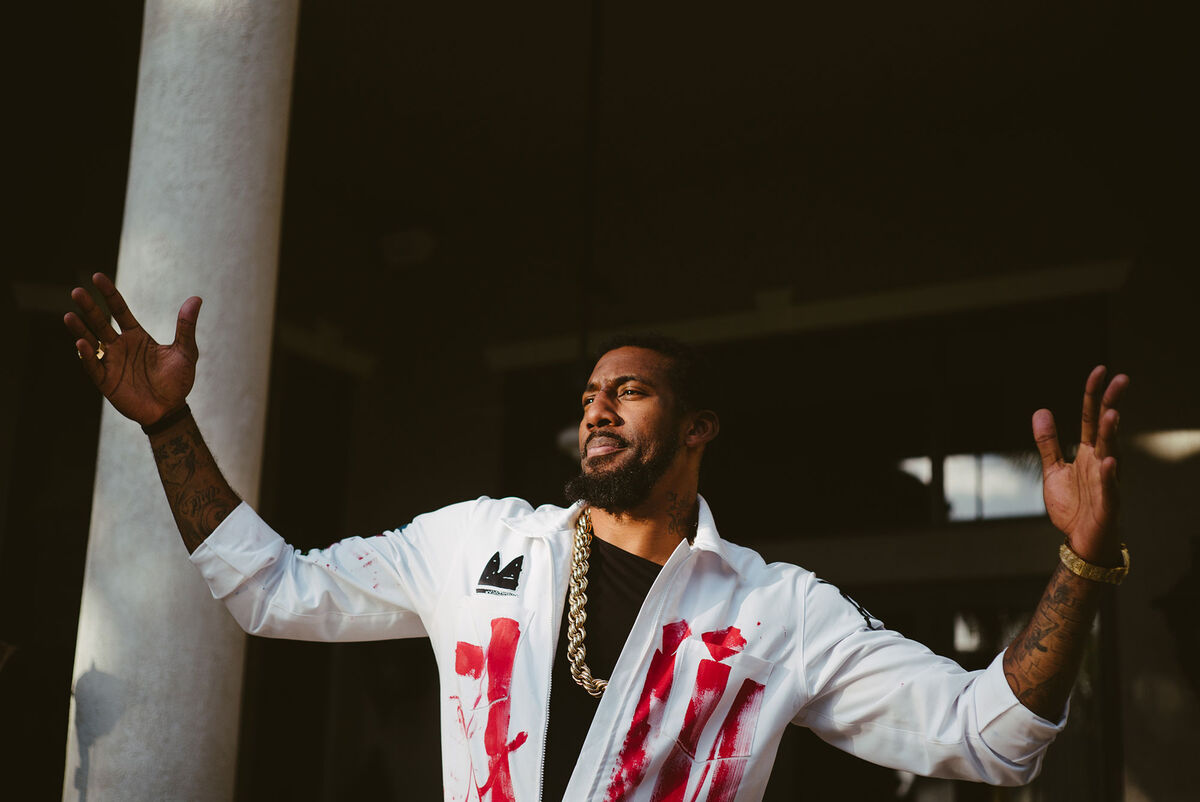 “If you see a painting out there and you wanna call me, I can give you the 411,” six-time NBA All-Star Amar’e Stoudemire tells me from his Miami mansion, a 14,555-square-foot home filled with run-of-the-mill baller pad fare—a movie theater, a nine-car garage, a game room complete with a wet bar—oh, and a budding art collection.
Stoudemire bought the house in 2011 for a cool $3.7 million following a mega-deal with the New York Knicks, and the following year began to fill it with art. His Instagram account, with some 366,000 followers, is dotted with ’grams of new acquisitions—paintings by up-and-coming artists
Devin Troy Strother
and
Hebru Brantley
, a print by
Basquiat
—and, well, one where he’s taking a bath in red wine post-practice. (His favorite soak? Matarromera Crianza. Don’t worry, he drinks a glass after.) 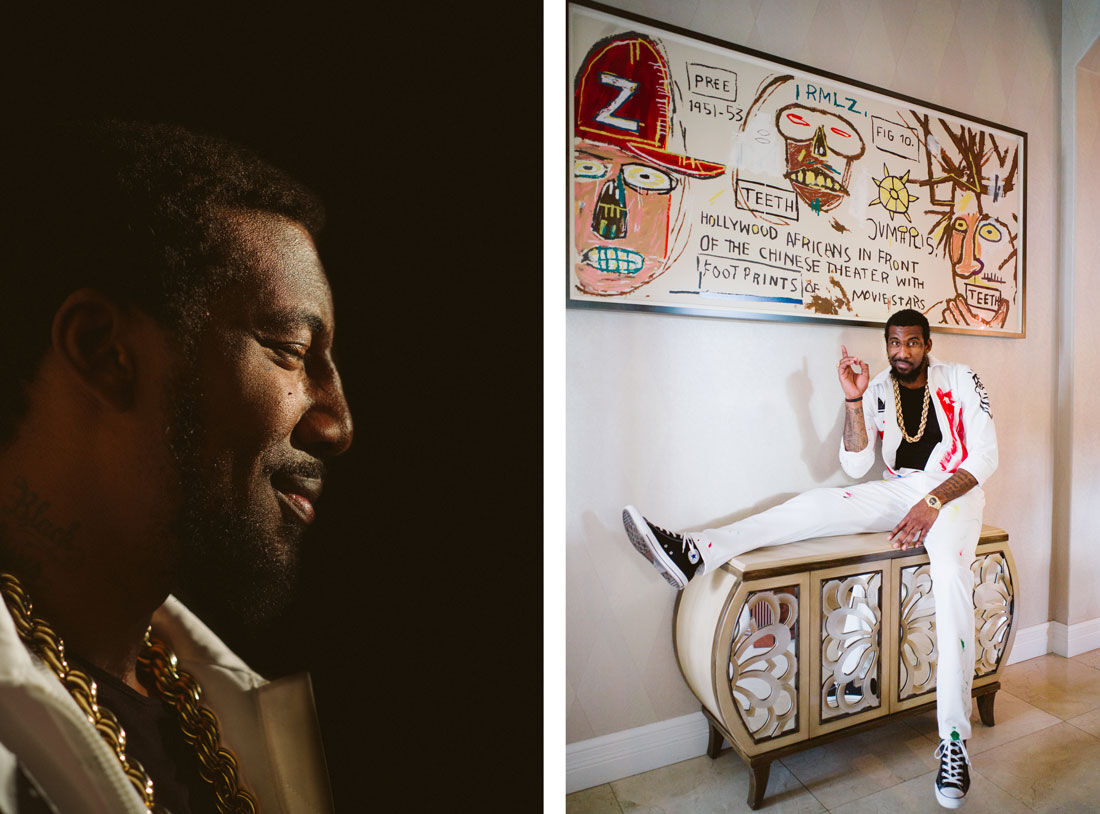 Advertisement
Currently in his 13th year in the NBA, on a one-year, $1.5 million contract with the Miami Heat, Stoudemire has added curator, art collector, and adviser to his list of many well-styled hats donned. Since his 2003 NBA Rookie of the Year award—he was the first-ever high schooler to receive it—he’s played ball for the Phoenix Suns, the Knicks, the Dallas Mavericks, and the Miami Heat; teamed up with designer Rachel Roy on a sporty women’s fashion line; authored a Scholastic paperback series for middle-schoolers; made a cameo on Law & Order; and played himself as an anxious patient pre-knee surgery in Judd Apatow’s Trainwreck.
Stoudemire’s off-court assists of the art-world sort date back to November 16th, 2007. He was ringing in his 24th birthday at a party in Phoenix, Arizona (then playing for the Suns), when a friend brought over a memorable gift that would spur years of future collecting. What to give a basketball player who has everything? A painting of himself, at a lifesize 6’11”, holding a few of his favorite things: a menorah, a Bible, and, you guessed it, a basketball. “There were a lot of symbols inside the painting that reflected my thoughts, who I am. I loved it,” says Stoudemire, who is “culturally Jewish” and sports a Star of David tattoo on his left thumb. “That was when I started to become more involved in the art world.” 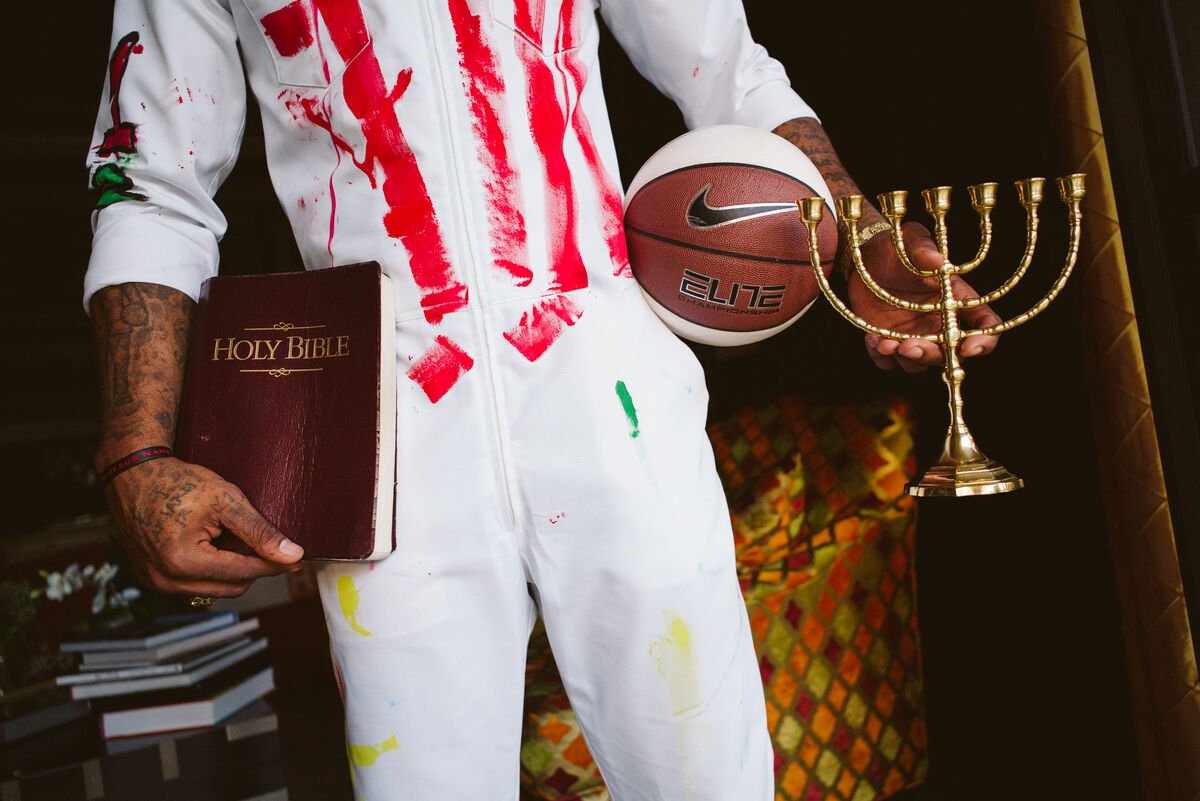 Portrait of Amar’e Stoudemire in his Miami home by Gesi Schilling for Artsy.

Stoudemire’s cannonball into the art world recalls the center-forward’s similar dive into the world of fashion. “In the beginning, there was a void between the NBA and fashion,” he says. “I was able to take on the fashion world, to create an understanding of fashion in the NBA.” He recalls that after he sat American Vogue editor-in-chief Anna Wintour courtside at Madison Square Garden, the two began sharing the front row of fashion shows. “I’m on the board of the Met Gala every year. I was able to intrigue my peers to also get involved in fashion; now you have Russell Westbrook, Dwyane Wade, Chris Bosh, Tyson Chandler, guys that are really taking on fashion.” He adds: “I see the same importance as far as the NBA and art.”
When infiltrating the art world, Stoudemire again played to his strengths. To purchase his first painting in 2012—one of
Rob Pruitt
’s iconic panda paintings—Stoudemire bypassed the usual gallery opening chitchat or fair fervor, inviting the artist courtside to a Knicks game. “After the game we became friends. He invited my family over to the studio. We painted, we talked, we had coffee,” says Stoudemire. “That’s when I bought my first painting from him. He actually gifted us a few more paintings which was great for us as a family,” he adds. (His oldest daughter is interested in art.) 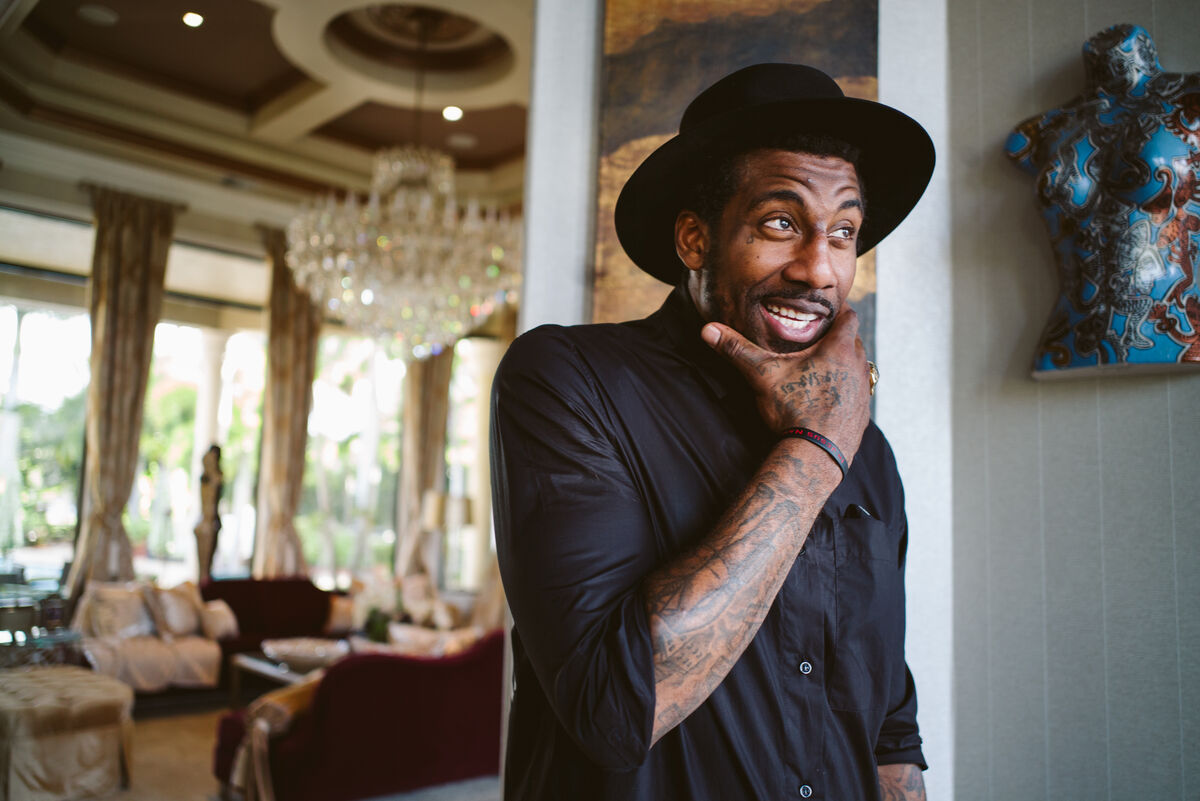 Portrait of Amar’e Stoudemire in his Miami home by Gesi Schilling for Artsy.

From there, it was full speed ahead. Stoudemire’s Miami home is filled with some 70 works, including pieces by Pruitt,
Warhol
, Brantley, and a recently acquired Basquiat (“a brilliant piece and a once-in-a-lifetime opportunity for me”). It serves as headquarters of the Melech Collection (“Melech means king in Hebrew”), his platform to promote emerging artists and bridge the gap between art and professional sports. “As athletes we should look more to art,” he says. “We buy these amazing homes—let’s decorate them with some brilliant art.”
And that means hooking up his friends, too. “I’m actually becoming the curator and dealer for my guys in the NBA,” he says, recalling the time Dallas Mavericks forward Chandler Parsons called him up about the painting by 33-year-old Oklahoma-based painter
Robert Peterson
he’d spotted on Stoudemire’s Instagram feed. “I was able to speak with the artist and get him a good deal for whatever painting he wanted.”
Advertisement 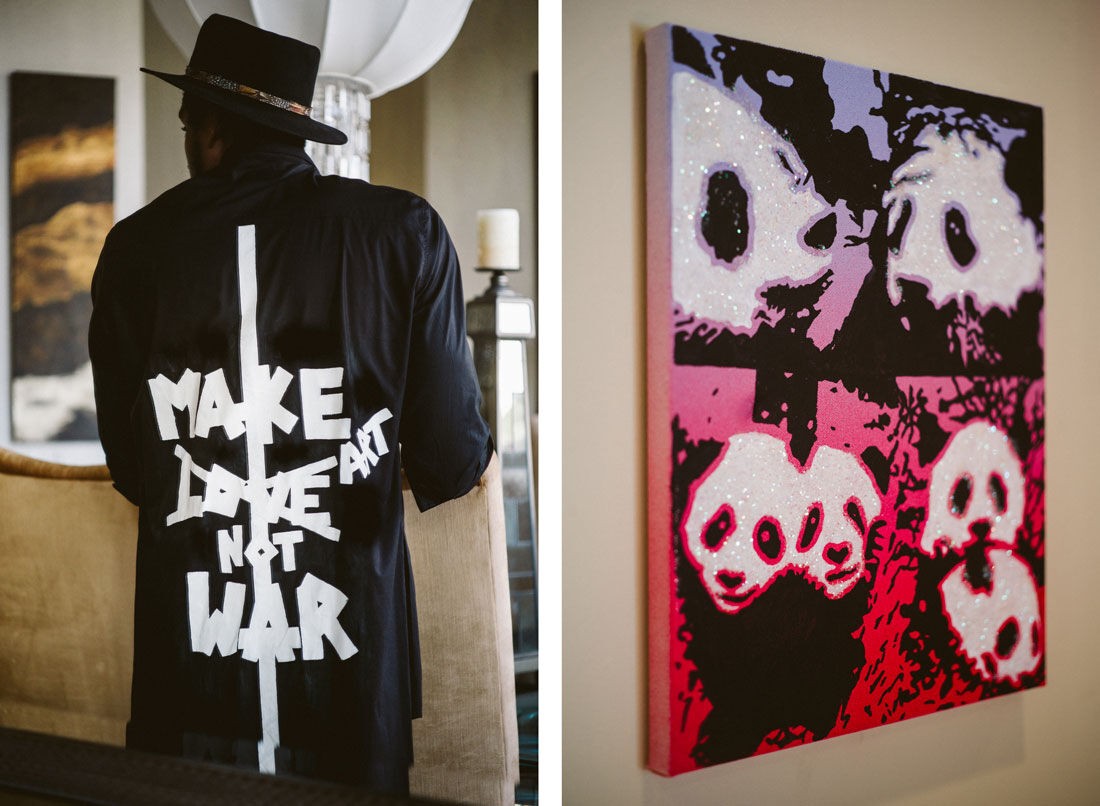 Left: Portrait of Amar’e Stoudemire in his Miami home. Right: Painting by Rob Pruitt. Photos by Gesi Schilling for Artsy.

Aside from placing work with fellow players, Stoudemire’s started “In the Paint” (an allusion to basketball’s painted area in front of the basket), where he teams up with emerging artists to set up workshops for underprivileged youth, tasked with choosing between playing ball with Stoudemire or dipping into paint cans. So far he’s worked with artist pals
RETNA
in L.A. and Brantley in Chicago, each time donating a check to benefit the local space. “The kids enjoy painting, they enjoy basketball, and the artists get press out of it—it’s something that is going to enhance their brand.” And he’s curated a selection of works for Sotheby’s Contemporary Curated auction in March.
“I think what Amar’e is doing is inspiring,” said pal Kasseem “Swizz Beatz” Dean, from whose No Commision Art Fair Stoudemire purchased a Brantley work during December’s Art Basel in Miami Beach week. “Art is for everyone,” Swizz added. “That’s what made me start showcasing more affordable artists, new artists that galleries might never show.” It’s a mission he’s recently furthered with Canon and their The Unknowns Auction, which highlights the works of undiscovered talents and the Dean Collection, his own assemblage of contemporary art. “If more athletes become educated about art and start collecting,” he said, it can only help that effort. 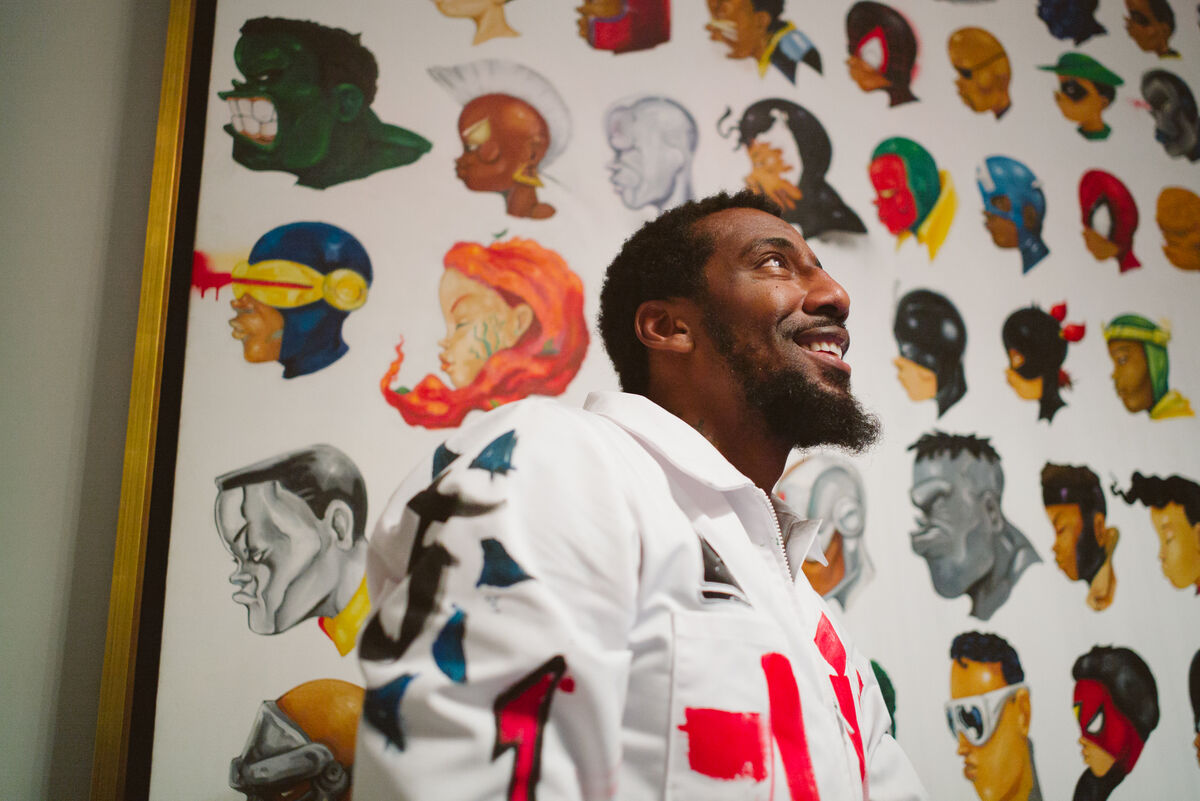 Portrait of Amar’e Stoudemire with a work by Hebru Brantley in his Miami home by Gesi Schilling for Artsy.

Having doubled the average lifespan of an NBA career, Stoudemire’s new game to hook his teammates up with the hottest emerging artists suggests some pretty alternative post-NBA plans. Sure, there’s coaching, sports broadcasting, or small-business owning (take Karl Malone’s tree-harvesting business in Louisiana, Shawn Kemp’s Seattle sports bar stint, or Tom Chambers’s horse ranch in Utah, for example) but Stoudemire has historically veered from the norm. And while the relentlessly fickle fashion world always looks for the next, hotter star to don their wares, the art world—thus far without significant penetration into the wide world of sports—will no doubt perk to the idea of pro athletes helping to nurture the next wave of emerging artists’ careers.
Molly Gottschalk is Artsy’s Lead Visuals Editor.
Further reading in Art Market