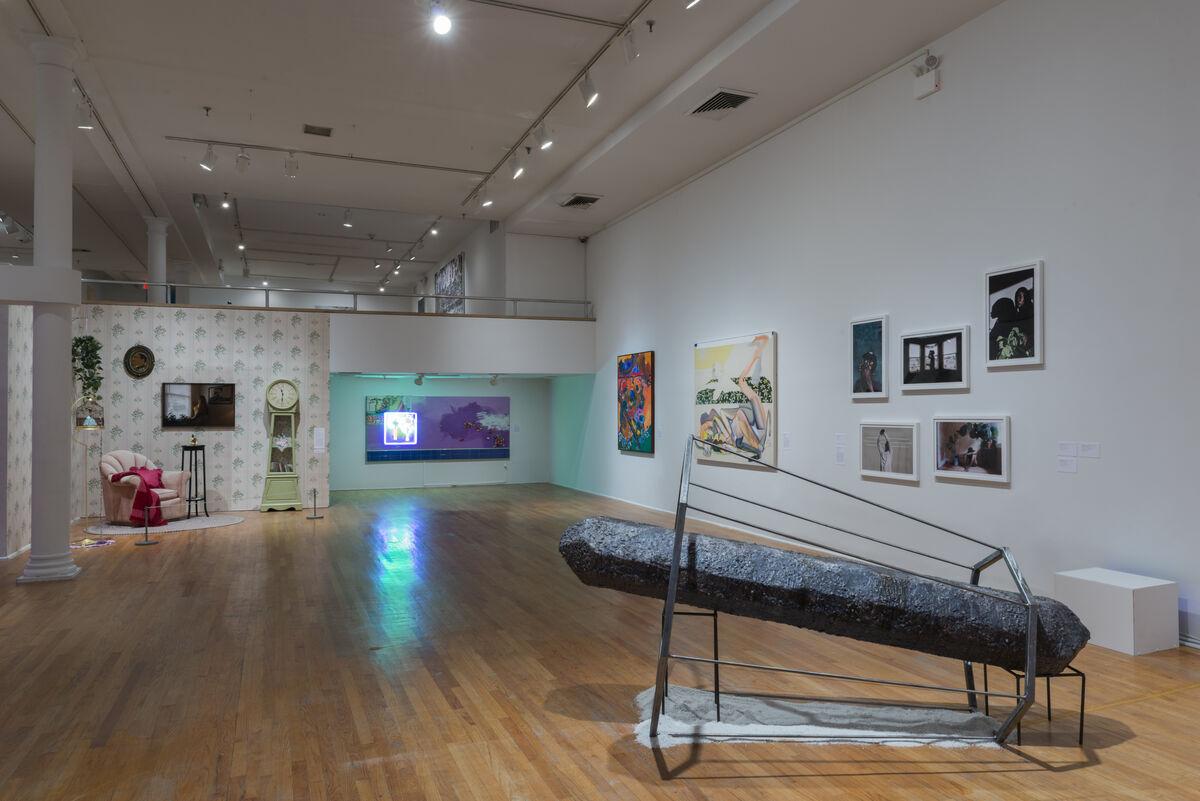 The Studio Museum in Harlem’s director and chief curator, Thelma Golden, organized the groundbreaking exhibition “Freestyle” in 2001, her second year in the post. At the time, she didn’t anticipate that it would evolve into a series that has both shaped conversations around art made by individuals of African descent over the past two decades, and helped to springboard numerous artists to national (and international) visibility.
Among those who have featured in what is now affectionately known as the “F” series—later exhibitions included “Frequency” (2005–06), “Flow” (2008), and “Fore” (2012–13)—are
Mark Bradford
,
Rashid Johnson
,
Mickalene Thomas
,
Nick Cave
,
Lynette Yiadom-Boakye
,
Otobong Nkanga
,
Firelei Báez
, and
Jacolby Satterwhite
.
Now in its fifth incarnation, the F series brings us “Fictions,” an exhibition whose title could not speak more directly to our fraught political climate, but whose display of work by 19 emerging black artists living and working across 11 American states feels optimistic and rich in personal perspectives. 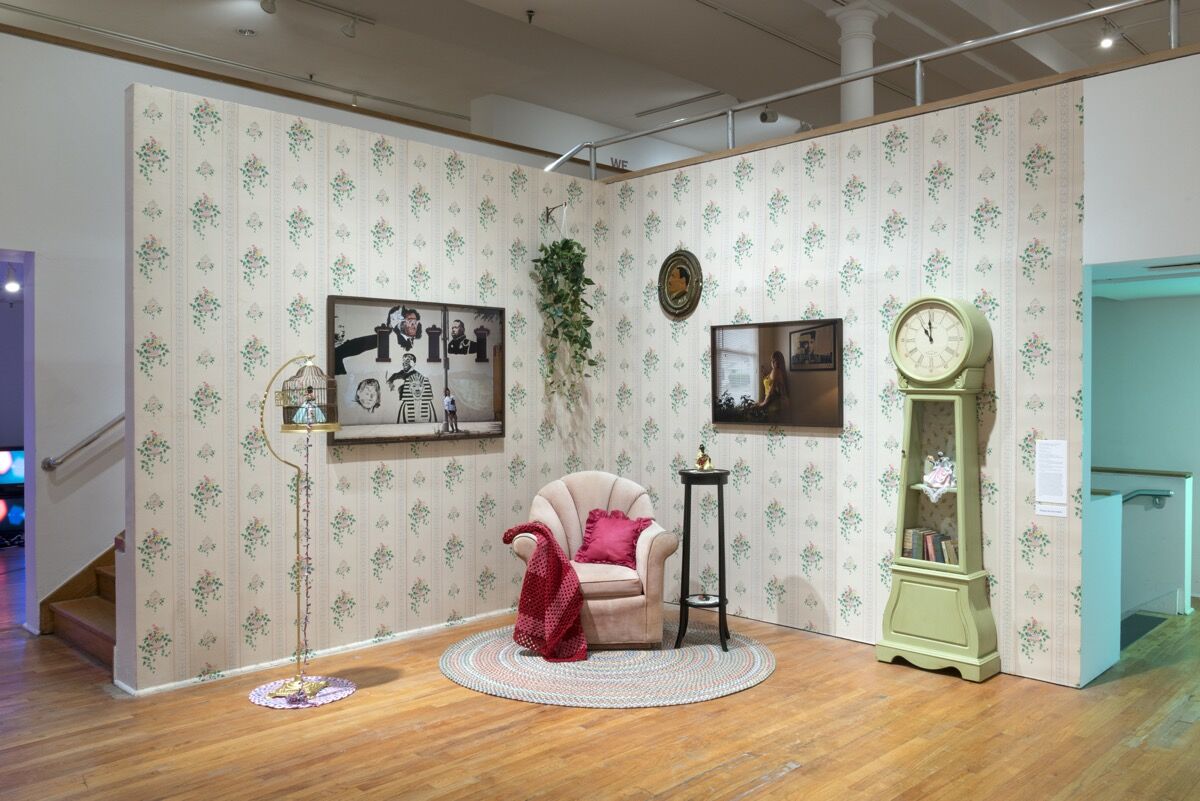 “We don’t approach these shows with a theme in mind,” says Associate Curator Connie H. Choi, who spent the past year visiting artists and organizing “Fictions” with her colleague Hallie Ringle. “But what we did find in doing these studio visits was that certain themes were coming up over and over again —artists that are engaging in alternate narratives and creating spaces to live their truths.”
One such space is Kentucky-born and Florida-raised artist
Allison Janae Hamilton
’s Foresta (2017), an installation composed of objects related to the American South. Horse manes hang from the ceiling, seemingly dismembered from model ponies whose taxidermy-like heads protrude from the wall; tambourines, mounted nearby, are overlaid with a projection of gently rippling water; and a approximation of a wooded forest barely conceals a series of fencing masks, lined up like stand-ins for human faces.
The latter is intended to invoke the historical use of the woods as a place of refuge for enslaved peoples in the 19th-century South, to hide, or to hold meetings of secret societies. Together, the components of the installation form a surreal, immersive, and unsettling environment, a psychological space where things are slightly twisted and awry, but one that also offers sanctuary and an imaginative prospect of escape. 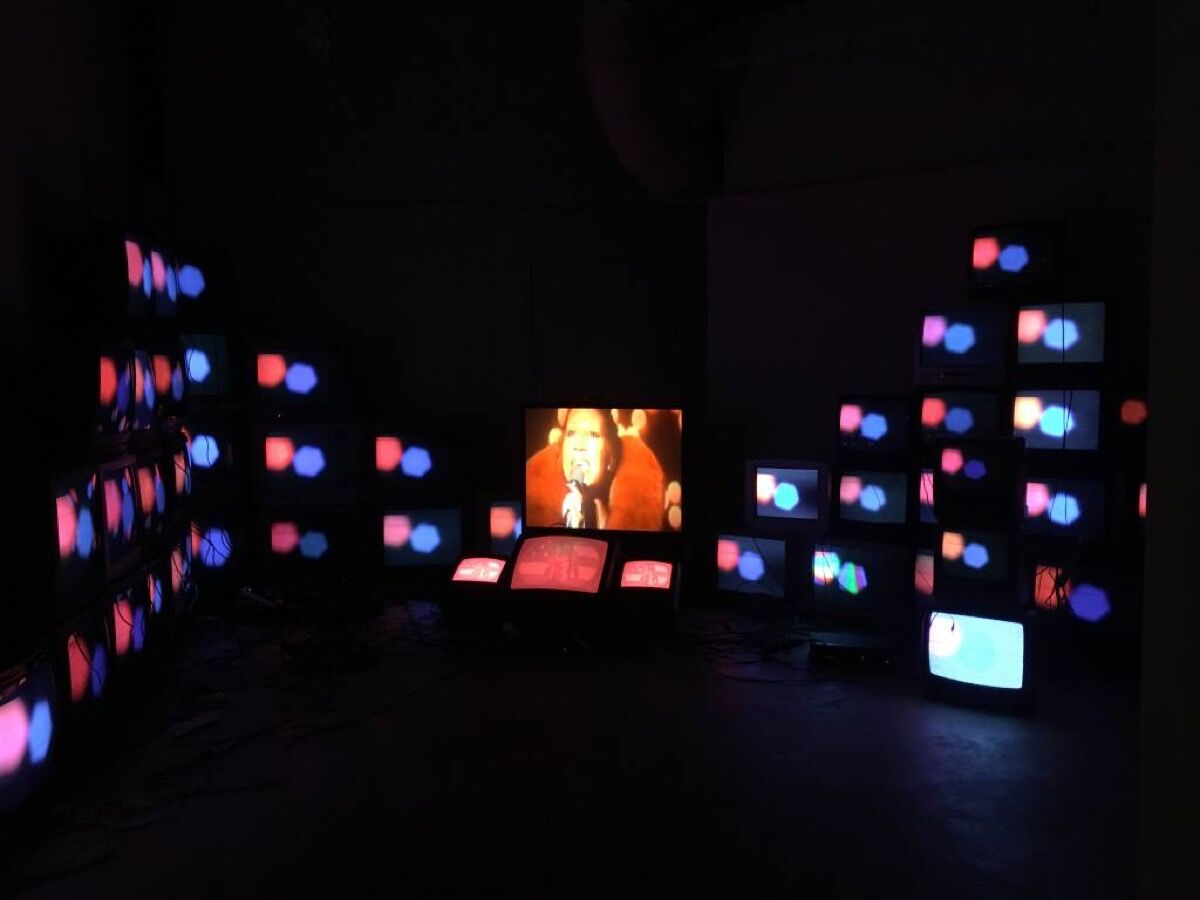 Advertisement
The realities of the external world are again filtered through a poetic lens in Paul Stephen Benjamin’s standout work, God Bless America (2016), in which piles of television monitors display pulsating red and blue lights—evoking the flashing lights of police sirens—accompanied by a rhythmic thump akin to the beating of a heart, and footage of Aretha Franklin singing “God Bless America.”
The active monitors give off heat, and that combined with a heartbeat is powerfully moving in its evocation of a live body. Fused with Franklin’s tender, warbling tribute to America, it conjures a complex, bittersweet emotion toward a country whose history and present are so deeply shaped by racism.
“‘Fictions’ is about alternative narratives, but it’s also about the way these artists are preventing their narratives from becoming fictionalized,” says Assistant Curator Hallie Ringle. And indeed, Texas Isaiah’s photographs, which depict himself along with other queer or non-binary black sitters, cast off stereotypes, insisting on the interiority of their subjects. In several of the elegantly composed portraits, subjects are shown in intimate settings or vulnerable moments, their faces partially obscured or cast in shadow in a way that seems to refuse viewers’ expectations; they hold agency, challenging onlookers’ ability to fully know them. 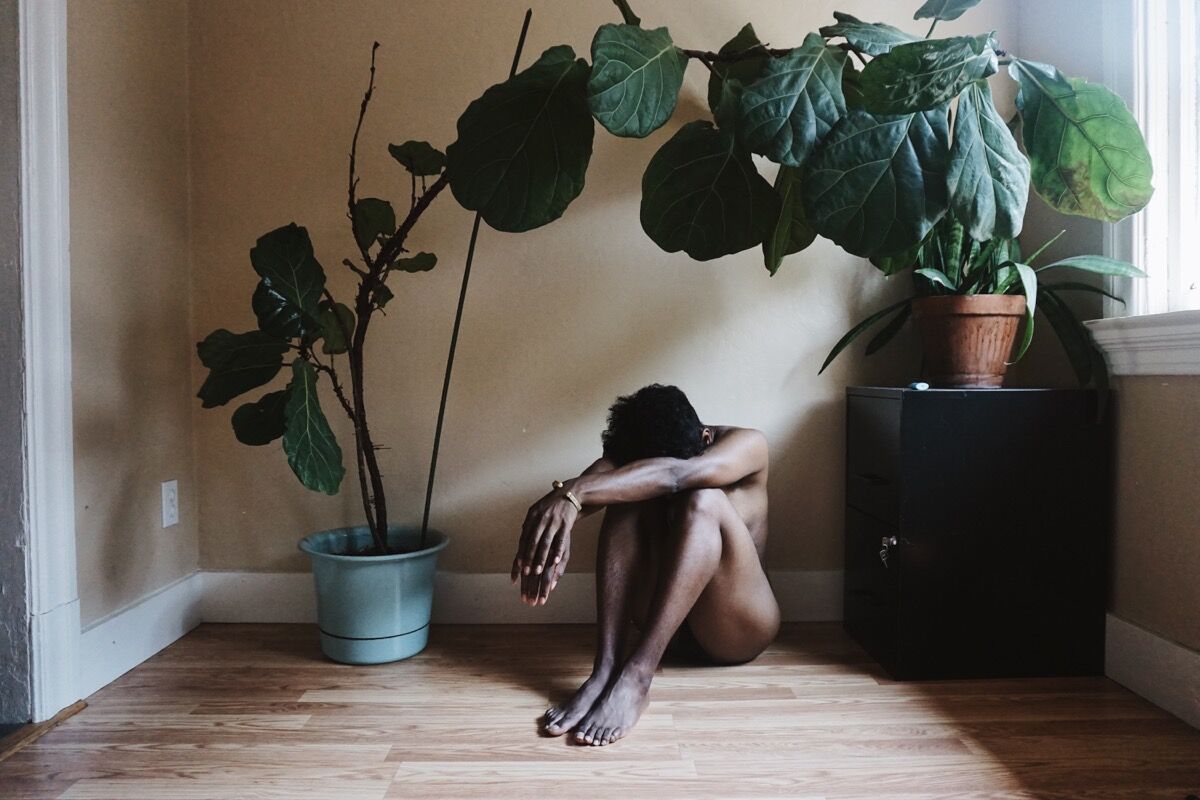 Genevieve Gaignard
also turns cultural narratives and archetypes on their heads in her site-specific installation, a living room of ambiguous location and decade. Containing a pink armchair, grandfather clock, and bird cage, among other objects, it suggests the domestic interior of an elderly white Southern woman, perhaps, but is complicated by Gaignard’s staged self-portraits hanging over wallpaper, in which the artist assumes characters that play with her mixed-race identity.
Gaignard subtly triggers and negates signifiers of gender, class, and race—toying with both the viewers’ urge to define the occupant of this unknown space, and the assumptions about identity that any such definition relies on. Her most pointedly brilliant addition to the room: three female figurines, Disney princess tschotskes in which she has replaced white skin with black. One of them, dressed in a fairytale yellow dress, embroiders a miniature version of
David Hammons
’s African-American Flag (1990), the original of which hangs outside the Studio Museum, its stars and stripes infused with the green and black of the pan-African movement. 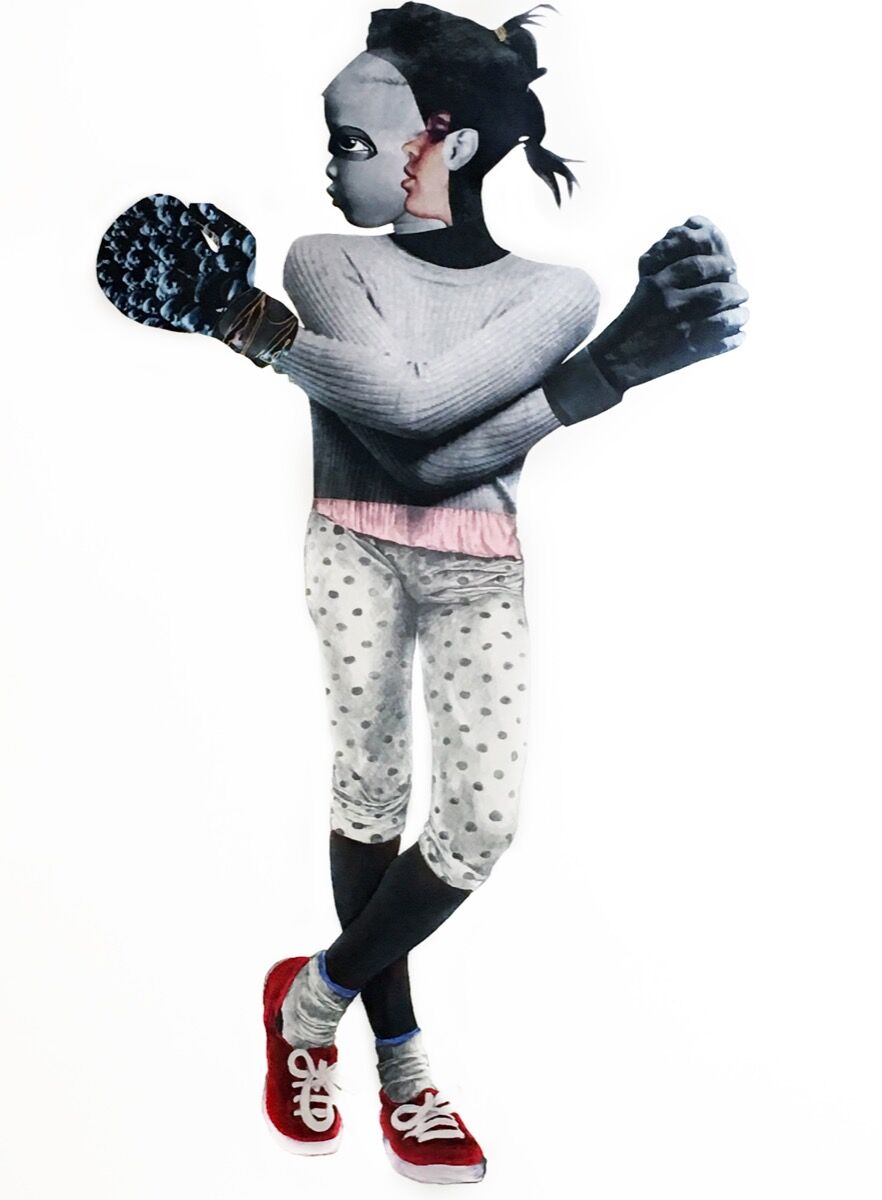 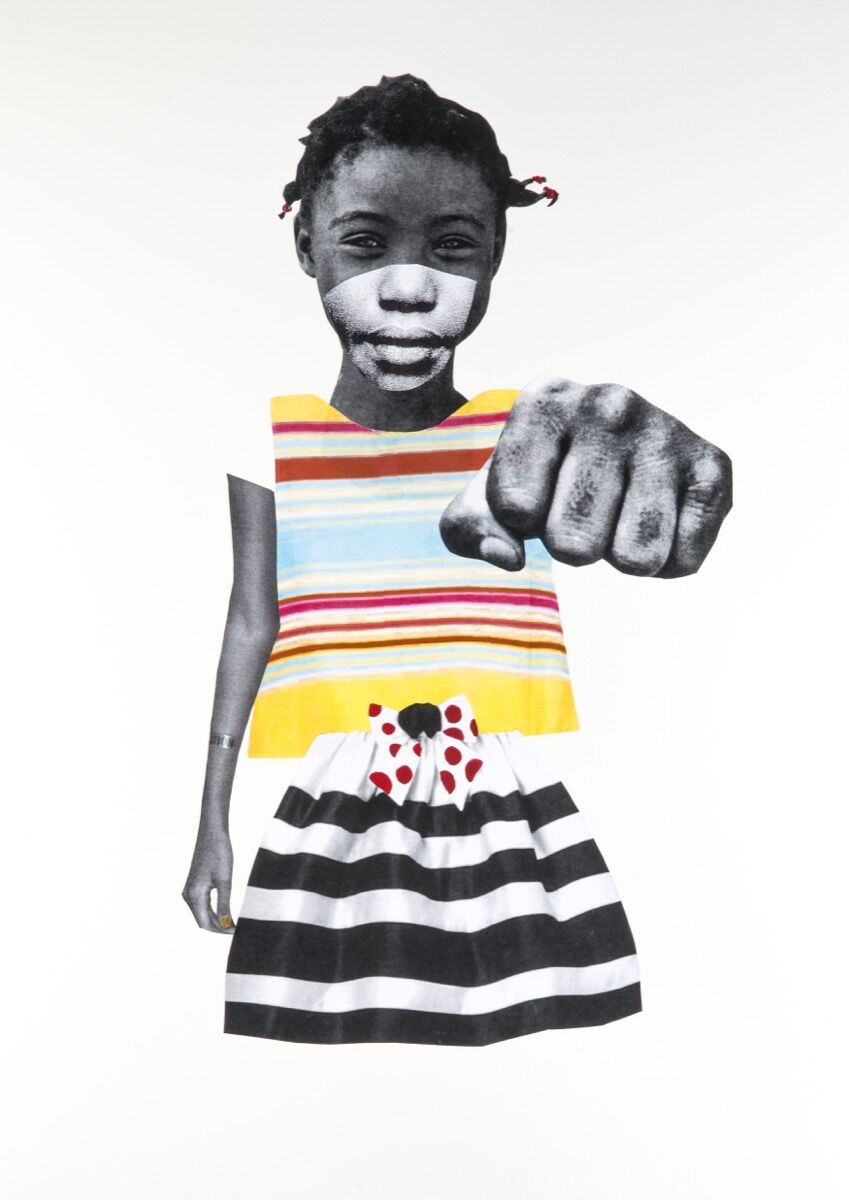 Deborah Roberts, It's All Good, 2017. Courtesy of the artist and Fort Gansevoort, New York. Photo by Philip Rogers.

Elsewhere,
Sable Elyse Smith
and Sherrill Roland confront and subvert the narratives that uphold the country’s Prison Industrial Complex through their own personal experiences of the system. Smith adapts photographs of American prison inmates and their families, sometimes blurring subjects’ faces, sometimes overlaying them with images relating to her own father’s incarceration. Displayed at the center of wide, engulfing black-suede frames, the images comment on the distorting lens of the prison system and the isolation of inmates.
Roland, who was wrongfully convicted of a crime in 2013 and spent 10 months in a jail cell, presents documentation from his performances for “The Jumpsuit Project,” in which he appears in universities, museums, and public spaces dressed in an inmate’s orange jumpsuit, sharing his story of racial profiling with members of the public. He’ll also perform several times at the museum throughout the run of the show, taking questions from visitors.
Other artists in the show use sound as a medium to abstractly amplify their own voices. Nikita Gale’s BIG BAD PICKUP (2017), a generic metal shelving unit housing two guitars, a handful of  towels, and some upholstery foam, is a sort of machinist surrogate for the artist’s body. Every few minutes the guitars emit a whirring growl, like an engine revving up. 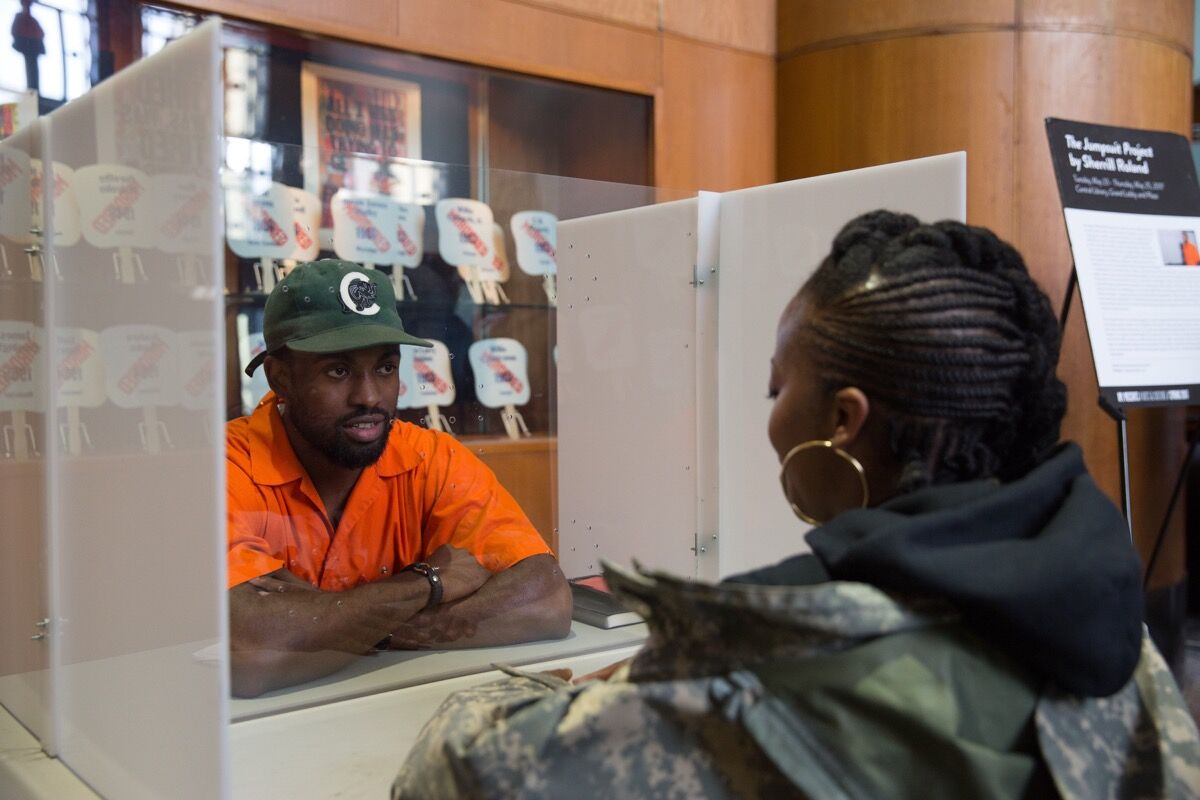 “I’ve been thinking a lot about the power of rock and roll,” Gale says. “I was listening to PJ Harvey’s new album recently, and sort of having a profound experience, thinking: This is what I’ve been wanting, some outlet for the state of the world. I want to make noise and have some kind of self-expression, but I’m not quite sure what the channel is. I also want to feel safe, not in danger—so there are bath towels in the piece that are sound-baffling.”
Michael Demps’s installation resembles a skeletal space ship: a giant, living crystal suspended within a diamond-shaped metal frame, producing an electronically generated reverberation. The crystal, which suggests an obelisk resting on its side and is composed of salt, wax, and other organic materials, will evolve over time depending on the humidity levels in the room. The frame is hooked up to a series of transducers that absorb surrounding sound and channel it into the metal, causing it to vibrate.
The piece, Choi says, developed from Demps’s interest in chakras, and the idea of finding one’s own balance and well-being. It’s placed alongside
Amy Sherald
’s peaceful, transporting portrait paintings, The Boy With No Past (2014) and The Make Believer (Monet’s Garden) (2016)—which show anonymous figures in environments that seem to be mental projections, dislocated from any concrete reality. Demps and Sherald both speak to the promise of creating oneself, incubating in one’s own interior world. 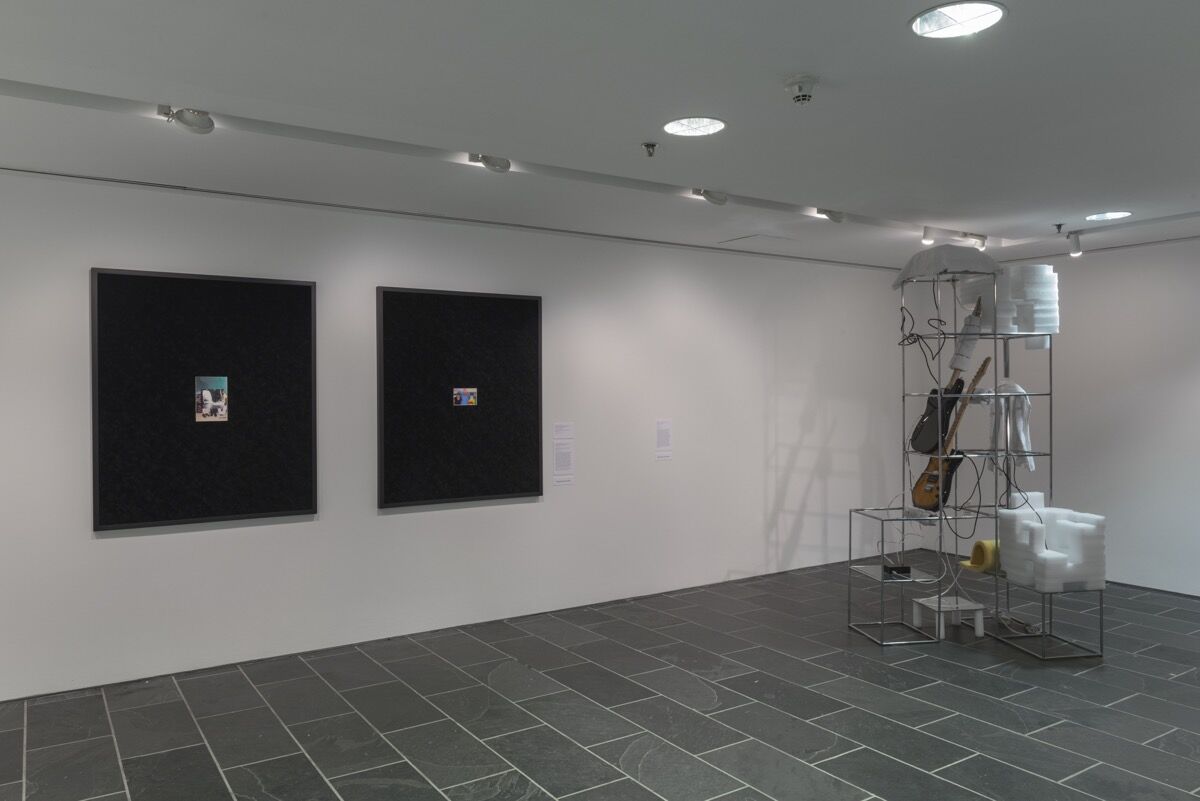 Installation view of works by Sable Elyse Smith and Nikita Gale. Courtesy of the Studio Museum.

At first glance,
Maya Stovall
’s Untitled A (2017)—the first and last work visitors see upon entering or exiting the main galleries—might be dismissed as a mere Instagram moment. Crystals hang from the ceiling and mirrors line the walls of a narrow space, endlessly reflecting viewers back at themselves. But here, in the larger context of “Fictions,” the installation is pointed and reflexive, resolutely throwing the question of one’s narrative, the story of one’s self, back at the audience.
In a media environment where alternative facts are rife, and a common perception of reality is becoming increasingly nebulous, “Fictions” is about the stories, of self and other, true and false, that define our world. But it doesn’t let viewers off the hook: Confronting an infinity of mirror images as they exit the museum, they are prompted to reflect on their own position, their own reality—and to find solid ground amid the numerous distorting lenses that surround us.
Tess Thackara
Related Stories